Streaming and OTT-based entertainment have taken off in a big way, which bodes well for smart TVs of course. Smart TVs are must-haves these days for sure, and streaming devices that convert dumb TVs to smart ones can be quite handy too. BenQ’s GV30 Portable Smart Wireless Projector, however, presents an interesting take on entertainment, and one that enables quite a few interesting possibilities. Let me elaborate. 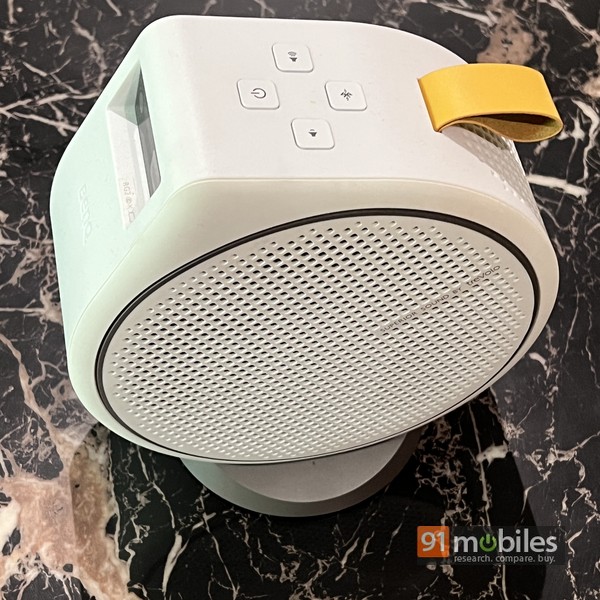 Projectors have been around for ages, and even portable, smart ones aren’t extremely difficult to find. The BenQ GV30’s unique design, however, adds lots of flexibility. Add to that the fact that it’s designed to be an all-in-one, standalone device, the projector comes across as an all-rounder. Encompassing a projector, an Android TV-based streamer, a 2.1 audio system, and a Bluetooth speaker into one, the GV30’s simple operation and auto adjustment capabilities just make it so much more compelling as an entertainment device. It even packs in a battery for portable use. 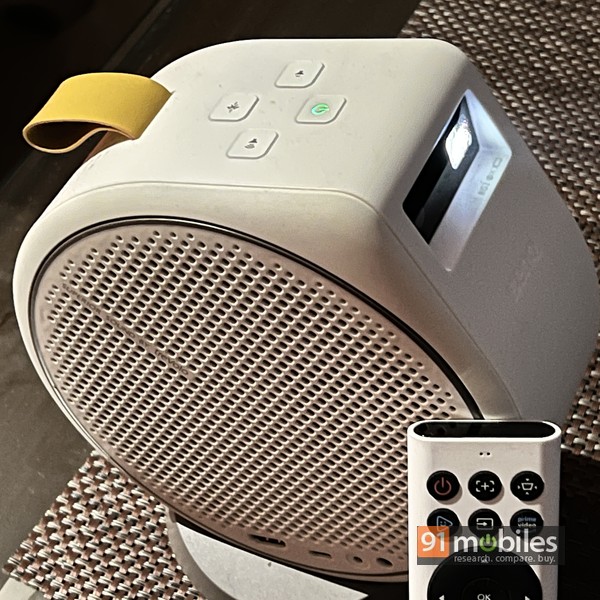 First up, the design. Clad in white, the GV30 is encased in a circular body, with a mesh on both sides. One portion of the circular body, the one that sports the projection window, flattens out. On top of the flat portion, you’ll find four buttons (power, volume up, volume down, and Bluetooth), and a leather loop that works as a carry handle for the device. On the left, closer to the bottom, you’ll see an HDMI port, a Type-C port, a 3.5mm audio out and a barrel port for connecting the bundled power adapter. The Type-C is actually a DisplayPort that can be used to connect compatible laptops etc, but you can also use it to connect flash drives for direct video playback, or even to charge the projector’s battery, provided you have an adapter or power bank that supports output of at least 45W PD. 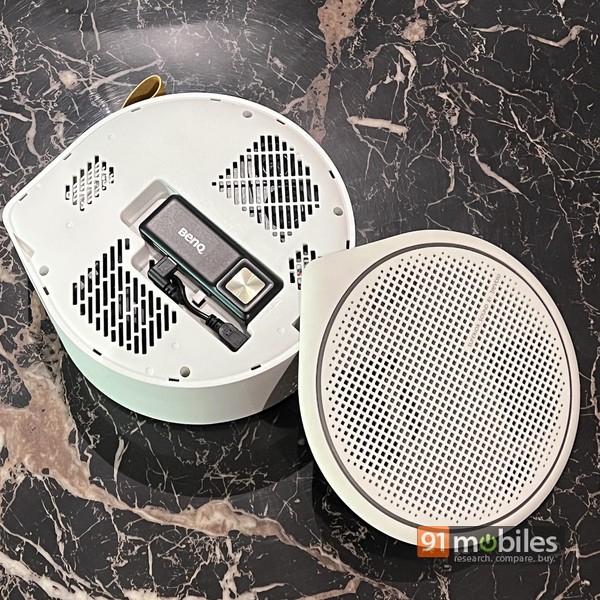 The right side of the device is just a mesh, or so it seems at first glance. As it turns out, the mesh cover on the right can be pried open to reveal a small groove inside, with a micro-USB port and another HDMI port tucked away towards the side. This groove accommodates the GS01 Android TV stick BenQ bundles along with the projector. The dongle plugs straight into the HDMI port, and draw power from a tiny cable that connects to the micro-USB port. Also included in the pack is a remote that controls the streaming stick. Pretty neat huh? That’s not it though. 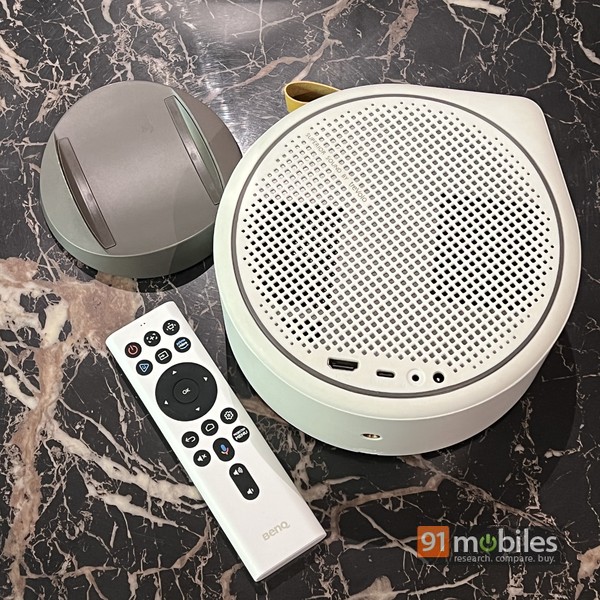 As far as I’m concerned, one of the key highlights of the BenQ GV30 is the circular design that allows it to be propped up at any angle. This is made possible by the base, also included in the pack. The base is small, yet heavy, and has a wide groove in which the GV30 projector can slot it. The base is magnetic too, making sure the device doesn’t move around when placed on it. And if by chance, you manage to knock it off the base, you should know that the GV30 is rated to withstand drops from a height of up to 2.3 feet, which is equivalent to the height of most tables. 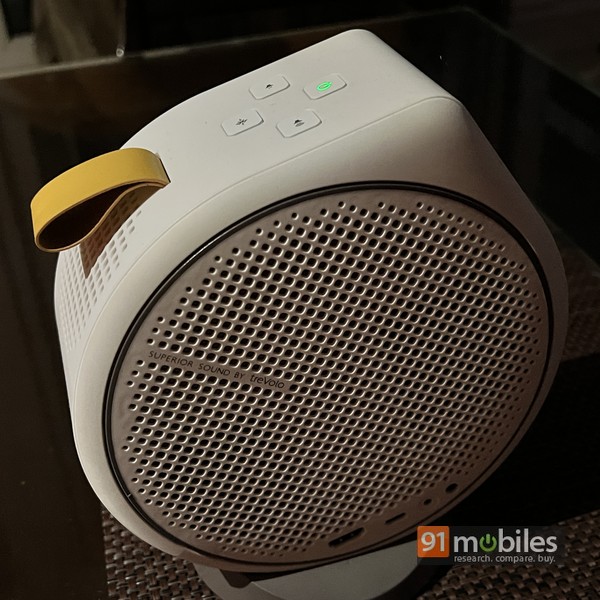 The next big highlight is the easy setup. For one, you can place the projector anywhere you like, as long as it has a light-coloured (preferably white) background or wall in front to project on. Basically, you can place it on the floor, a table or on any flat surface, and the circular body of the device can be rotated on the stand to face the wall. Heck, you can even place it on a bed or couch and project on the ceiling if you want. The built-in battery means you don’t really need a power socket in close proximity, but it’s worth mentioning that the bundled adapter does have a pretty long cord should you need to supply power. While most projectors require a fair bit of tinkering around to get an optimum projection, the GV30 features autofocus and auto vertical keystone correction, which means the projection adjusts the display automatically. Not only does it eliminate the hassle of setting focus etc, it also means you can just move the projector from room to room painlessly. 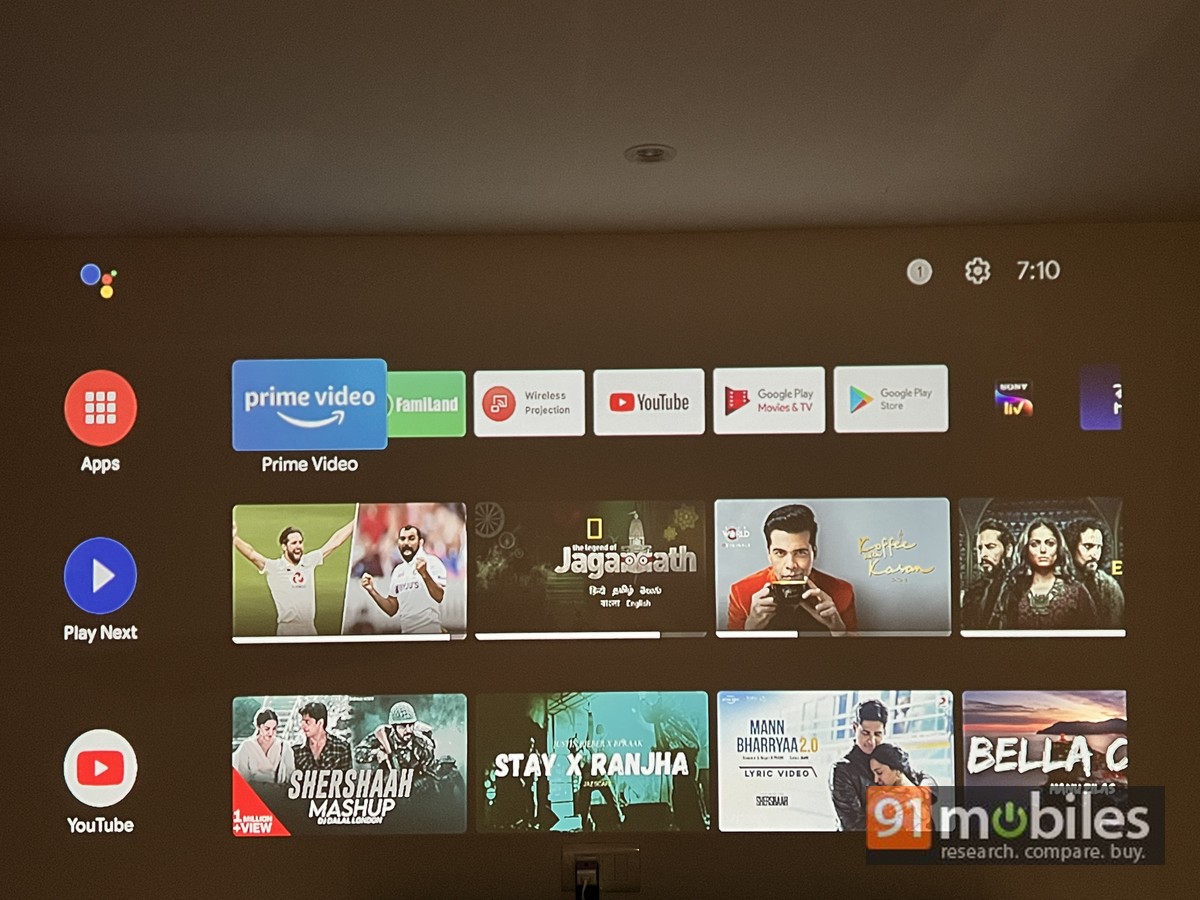 The other aspects of setting up basically need you to configure the Android TV, and that’s the usual process of using the bundled remote to go through the initial setup process, entering your Google credentials and inputting your Wi-Fi password. The remote itself is quite handy, featuring the usual controls, including a shortcut key for Prime Video. In addition, it also has keys for focus and keystone (if you need to adjust these manually), along with access to the projector’s menu. Once the Android TV bit is set up, you can go ahead and download the apps you need from the Play Store. However, there’s one caveat here. The Netflix app isn’t available to download on the device via the Play Store, and for that, you need to use a workaround and get the app instead from an alternative app store like Aptoide. Furthermore, the downloaded Netflix app downloaded can’t be controlled using the bundled remote. You need to make use of the BenQ Smart Control app on your iPhone or Android phone to navigate and use the Netflix app. 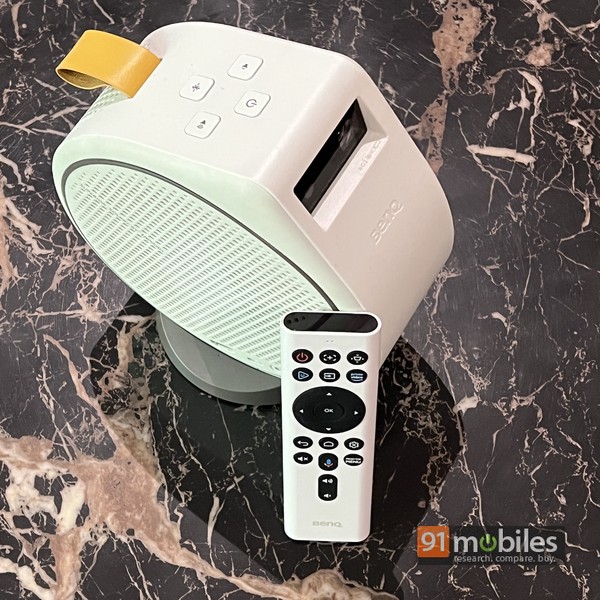 The BenQ GV30 uses a DLP projection system with a native output resolution of 720p and 300 lumens brightness, with the LED life rated at 20,000 hours in normal mode. As far as audio is concerned, the GV30 packs in a pair of 4W speakers and an 8W woofer, along with a DSP amplifier. Not can the device be used as a Bluetooth speaker, you can even output the projector’s audio to an external Bluetooth speaker, headphones or TWS earphones. And of course, there’s the 3.5mm line-out for connecting external speakers using a cable. The HDMI port on the outside (I’m not counting the one inside, since it’s sort of reserved for the Android TV dongle) and the Type-C port give you a lot of flexibility to connect sources like laptops, gaming consoles etc too. As an added bonus, the BenQ GV30 support both Google Chromecast as well as Apple AirPlay, so you can even mirror your iPhone, iPad or Mac wirelessly. 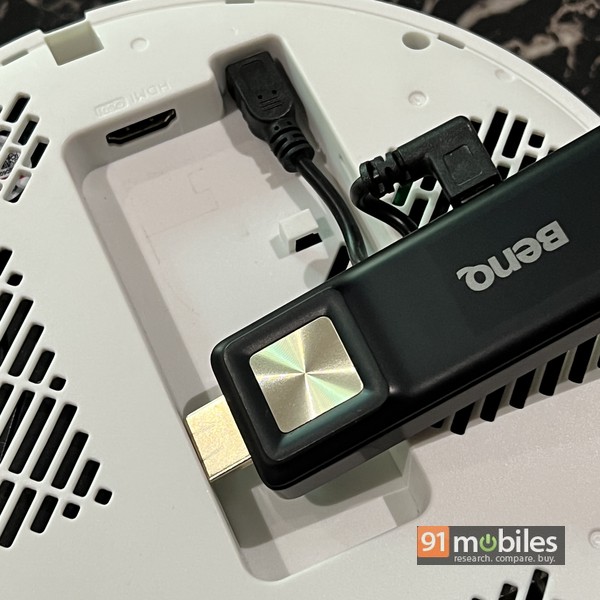 Fun fact: the groove inside the lid, the one which is occupied by the Android TV stick, can even accommodate an Amazon Fire TV Stick, so make of that what you will. Of course, I’m not suggesting you spend extra to buy a Fire TV Stick, but just in case you do have a spare one lying around, using that could take of the Netflix issue I mentioned earlier. And heck, you can connect the Fire TV Stick on the external HDMI port instead of prying the lid open anyway. 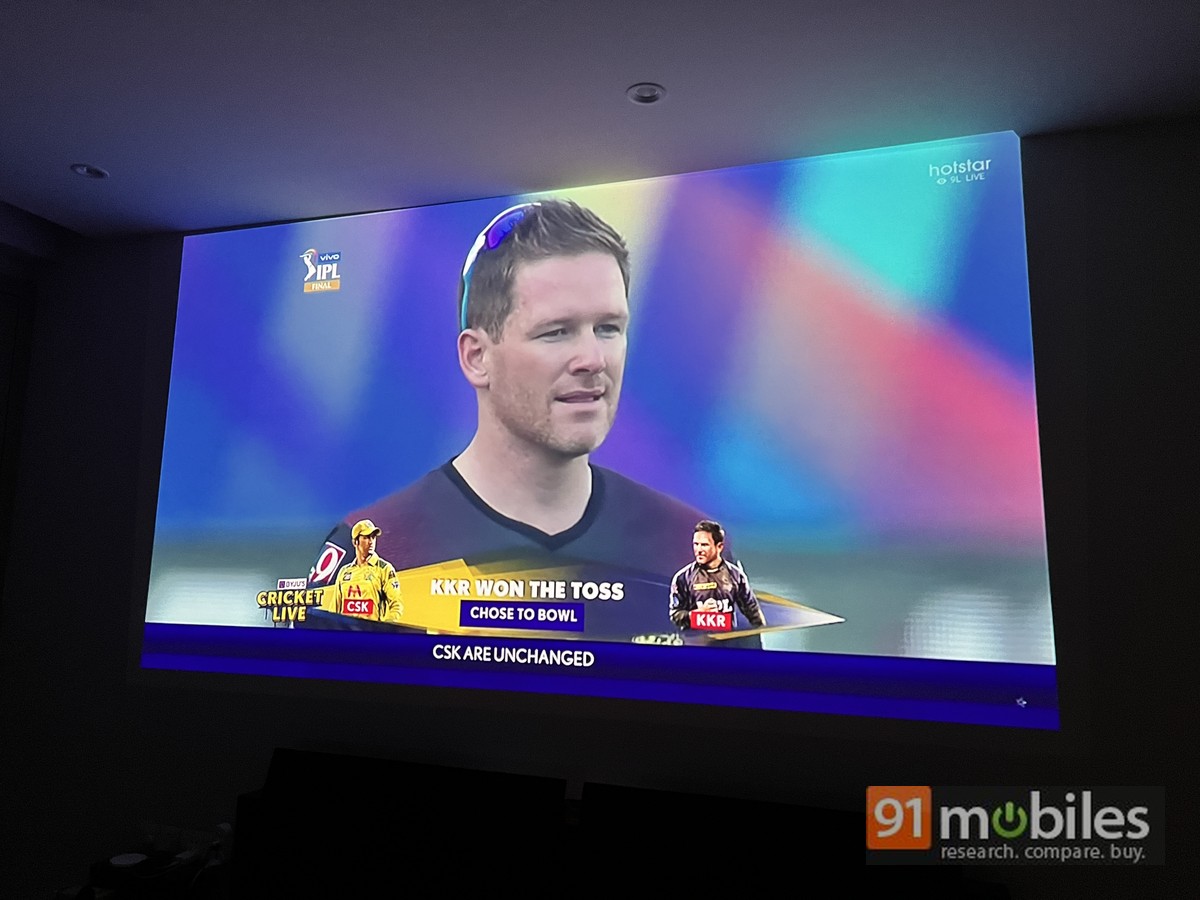 The BenQ GV30 can project image sizes ranging from 30-inch to 120-inch, though BenQ recommends keeping it within 80 to 100-inches. The resolution might be 720p, but in my usage, I found the display output quite good even with these large image sizes. The picture looked sharp, while the colours look vibrant too. You do need to ensure that the ambient light is dim enough to get an enjoyable experience, and the GV30 works best in a darkened room with the curtains drawn. Darkness however, is something most projectors play well in, unless you opt for a high-end one, preferably one that uses laser technology. Here’s a photo showing the GV30’s projection on a wall, with a 55-inch TV for comparison below… just to give you an idea. Well, size matters in this case. 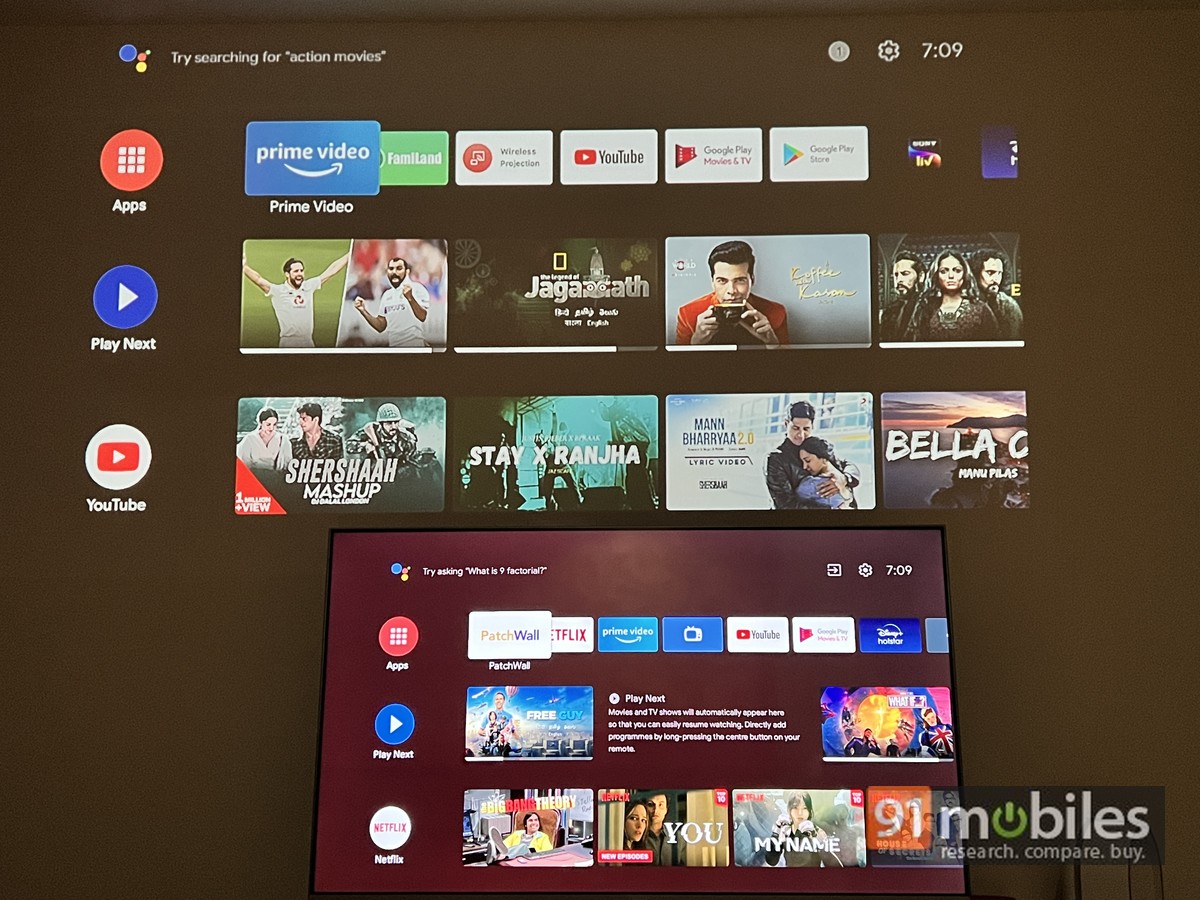 When it comes to sound, the GV30’s 2.1 speaker system outputs rich sound, packing reasonable punch for you to enjoy your movies. The GV30 works well as a music listening device too, especially when used for casual listening in a small room. However, it’s not powerful enough for a party, and there were some instances where I wished it was louder. That said, I think the GV30’s speaker system is an integral part of the device and is good enough to make it an all-rounder. And in any case, you do have enough options to connect external speakers or headphones if needed. A word on battery life too – the GV30 is rated for about 2.5 hours of continuous playback, but in my usage, I got closer to 1.5 hours, which is barely enough for a full movie. 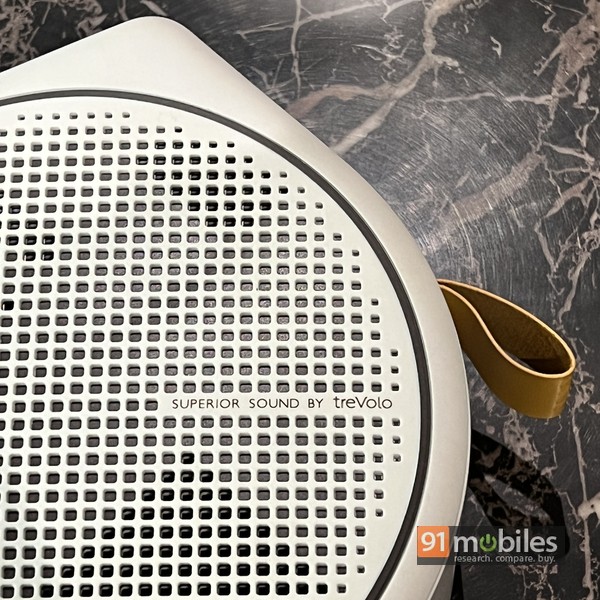 As I mentioned earlier, the BenQ GV30 presents an interesting take on entertainment, and given its asking price of Rs 54,990, isn’t too pricey either. While using a projector basically involves a dim room and the availability of a large white wall that doesn’t have any fittings or wall art, a smart TV doesn’t. That said, I think the flexibility and the all-round capabilities offered by the BenQ GV30 make it well worth a close, hard look as a potential alternative. 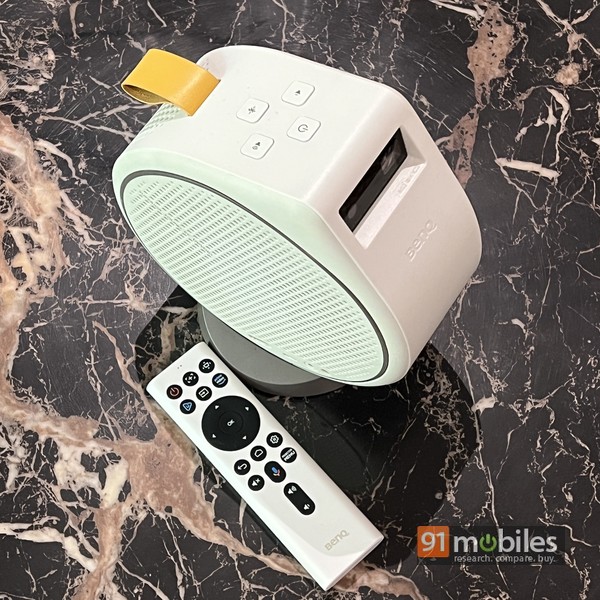 Unlike a smart TV, you can move it to any room that you want without hassle, carry it to a friend’s place, use it to project some background visuals at a terrace party, or use it for some serious work (like client presentations or inside a classroom)… the possibilities do seem endless. Did I mention it also comes with a very sturdy carry case?