Even during my early years of being a tech enthusiast and a casual gamer (I haven’t much progress on the latter if I’m being honest), I used to associate Alienware with the best heavy-duty PC gaming experience. Even today the brand commands respect in the world of intensive, graphically demanding titles, despite the fact that India’s high-end laptop market has seen penetration of other brands like ASUS’ ROG, Acer’s Predator, Lenovo’s Legion, and MSI’s Raider lineups. The Dell Alienware M15 R6 gaming laptop, which I’m reviewing here, is priced starting at Rs 1,59,990, making it an expensive purchase decision. My review unit is the specced out version which will set you back by Rs 2,39,990. 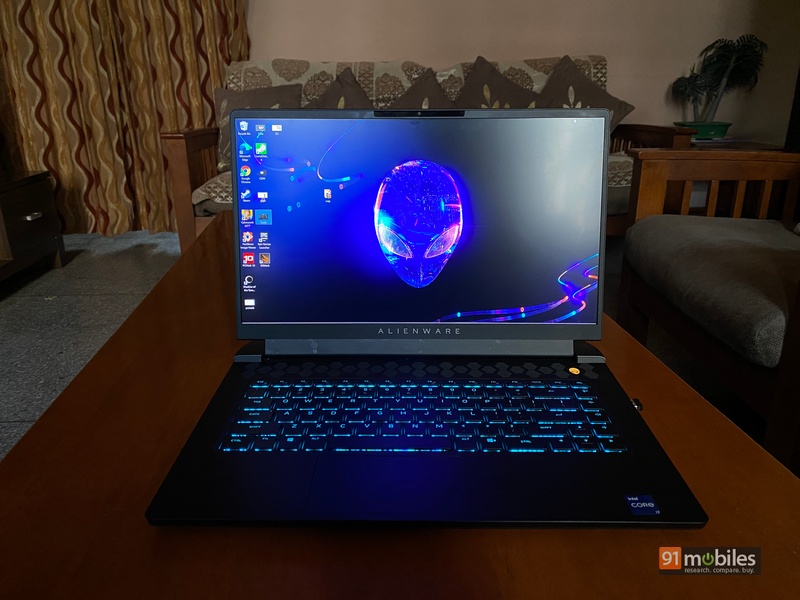 It’s quite clear that the M15, incidentally one of the most notable 15-inch laptop lineups in the world, is going to attract only the most exclusive gaming crowd. I had reviewed the M15 R3 back in 2020 and my verdict pointed towards a possible target audience that works in the creative domain (colour correction, video editing and the like) and not who’re into GPU-intensive gaming. It is imperative to know that the M15 R3 had a 4K OLED panel which is not very conducive to gaming, further compounded by the rather low 60Hz refresh rate. The M15 R6 gets an IPS LCD panel with QHD resolution and a 240Hz refresh rate. Let’s find out this review how good the laptop is and if it is worthy of the lofty price tag it carries. 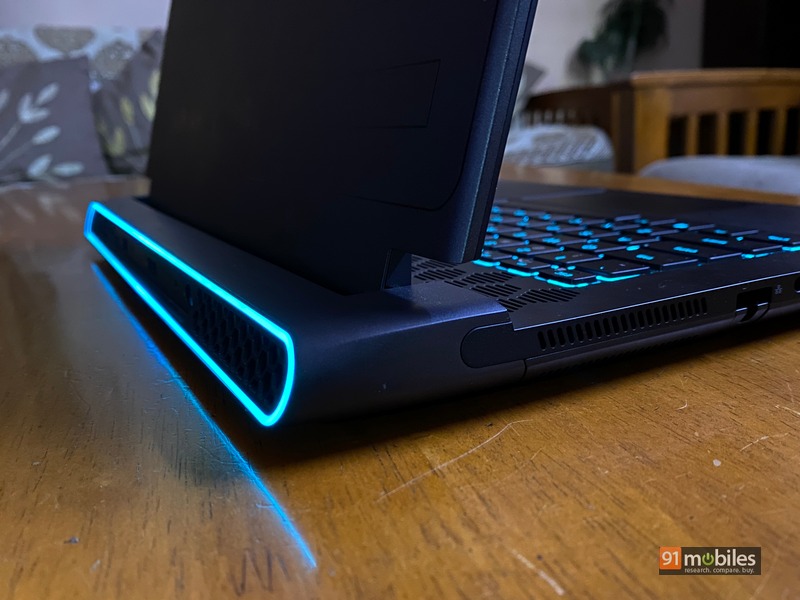 The Alienware M15 R6 comes in the matte-black colour combination which adds a touch of panache. Despite appearances, the M15 R6 is not a complete metal unibody design, featuring a plastic build on the hexagonal vents above as well as the slightly raised back edge of the chassis. The lid sits slightly in front and the hinge design, which has remained constant over the past couple of M15 iterations, gives the illusion that the screen is floating. For a gaming laptop, the R6 is actually not all that heavy at 2.48kg and I was able to slip it with reasonable ease in my backpack alongside the 240W adapter that comes with it. 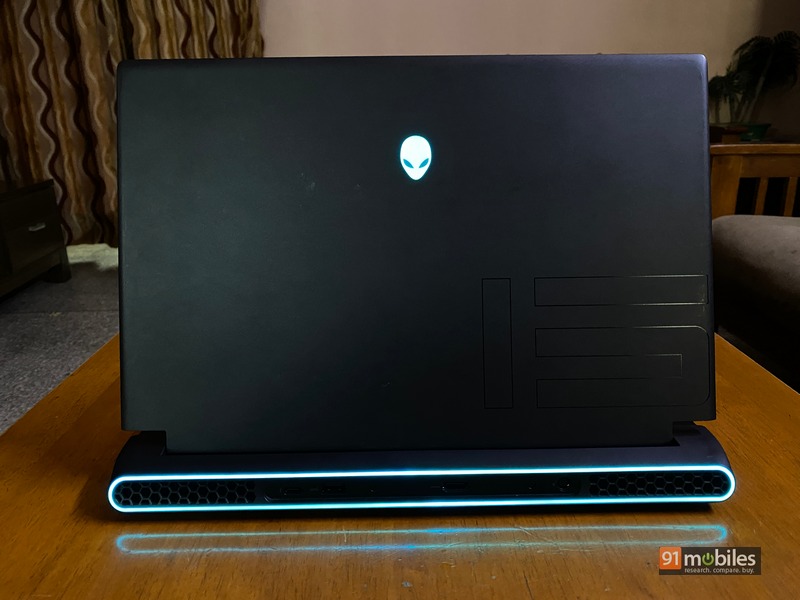 Alienware has always kept its devices a class apart in terms of design and the R6 further emphasis the brand’s appeal. The alien logo remains in its place at the back of the lid and keeps the RGB backlight illumination. On the front, the power button also retains the exact same look and it’s a pity that there is no fingerprint scanner embedded beneath. The speakers, which have been a bit of a thorn in the side for the brand, are on the bottom while a multitude of heating vents can be seen on the back and both the edges of the laptop. On the top bezel, there is a webcam. The chassis does have a tiny amount of flex which is mainly on the keyboard but otherwise, the build of the laptop is extremely sturdy. 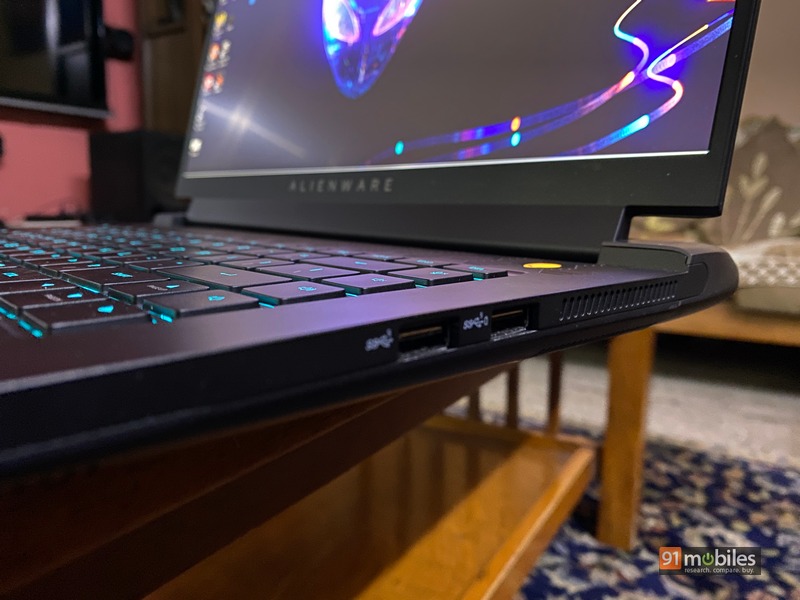 Connectivity options are decent enough on the M15 R6, which is a common theme on Alienware M series devices. The right side has two USB 3.2 Gen A ports while the left has an Ethernet slot along with a 3.5mm headphone and mic combo. At the back, there is yet another USB Gen A port, a USB C with Thunderbolt 4, Display Port 1.4, and 15W reverse wired charging capabilities, an HDMI 2.1 slot and a proprietary port for power delivery. For wireless connectivity the laptop packs in Bluetooth 5.1 and Wi-Fi 6 AX1650 (2×2) 802.11ax. 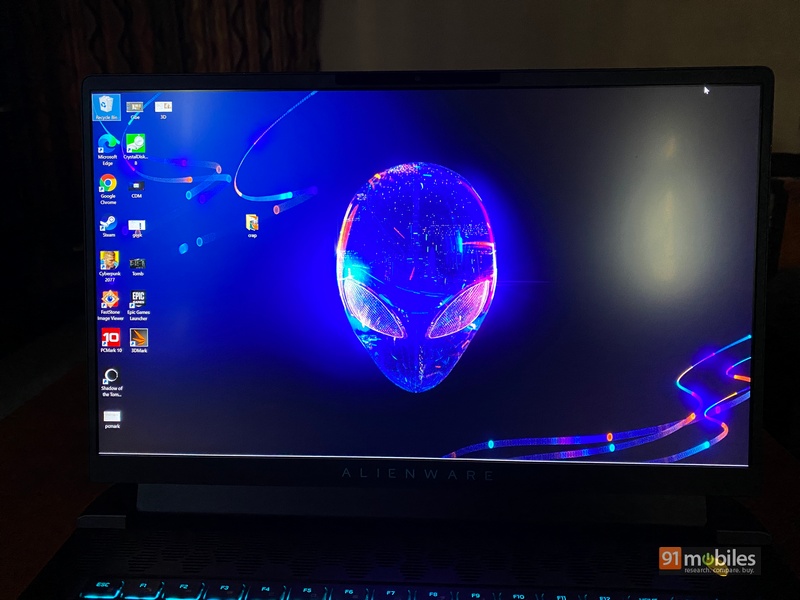 My previous interactions with Alienware displays have always been quite satisfying and the same feeling continues while viewing content on the M15 R6. Making use of an IPS LCD panel, the 15.4-inch screen packs in QHD resolution and a very impressive 240Hz refresh rate. The latter provides for more fluidity across the laptop’s general interface and browsing. However, its main benefit lies in gaming and combined with the display’s 2ms response time, the silky smooth visual experience is a treat for even the most hardcore of users. Of course, the real question is whether the laptop can sustain such high frame rates for long durations and I will answer that question later in the review. However, as a measure of the laptop’s raw display capabilities, you will find very little to complain about. The colours and dynamic range on the panel are very much up to mark and the off-axis shift is quite minimal. The brightness levels of the panel could use some improvement but then again I’m not taking this beast of a machine out in the park. In the overall scheme of things, the M15 R6 will certainly help a user with professional creative needs as much as it would satisfy the appetite of any gamer. 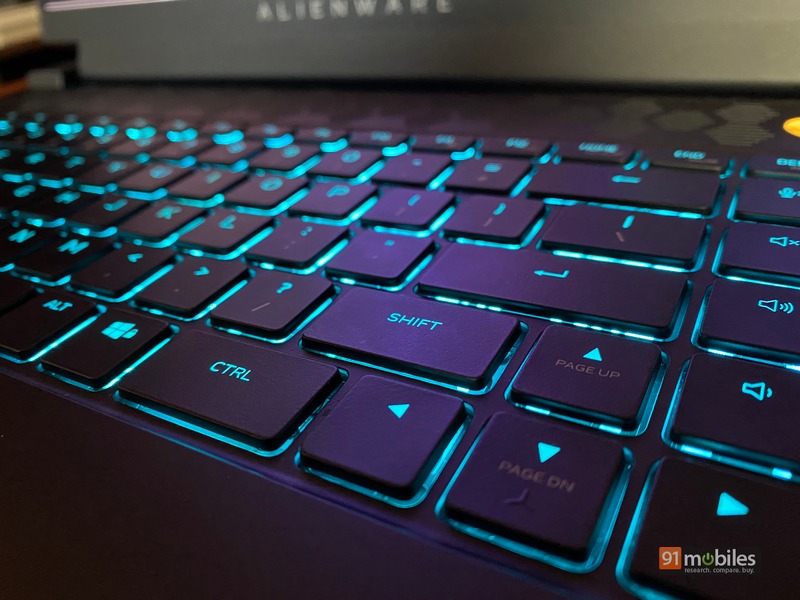 The six-row keyboard on the M15 R6 is spaced out for easy gaming and typing. Backlighting is customisable with various RGB combinations on the Alienware Command Centre app and the keys are amply illuminated for uninterrupted usage. I do like the dedicated volume control and microphone off keys on the side while the arrow keys are full-sized. The 1.8mm travel is excellent although typing can get quite noisy. There is no fingerprint sensor on the laptop but Windows Hello does enable facial authentication. The trackpad, although small for what a 15-inch laptop usually has, is quite responsive and has great haptics too. 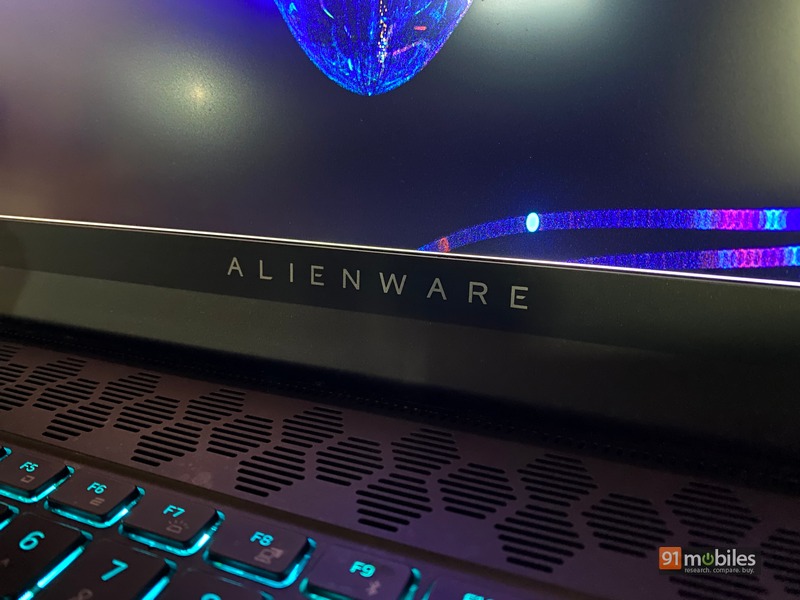 The meat of M15 R6’s sky-high price tag is the 11th-gen Intel i7-11800H CPU and NVIDIA’s RTX 3080 GPU. Both pieces of silicone are instruments of top-tier performance and pack in a plethora of power for the user to play around with. Alienware has placed thermal vents on all sides for better heat dissipation while the dual fans spin at full throttle and let out an exceedingly loud din. All this to say that as compared to the last couple of M15 iterations, which might not have kept up with competing products, the R6 is looking like a processing fiend. I did run a slew of synthetic benchmarks to get a better understanding and came away moderately impressed. For daily everyday workload, the laptop is obviously excellent with virtually nothing to complain about and that is demonstrated with the device’s PCMark 10 score of 6,561. On Cinebench R23, the multi-core score of 10,160 felt slightly lower for the chipset although the single-core performance was spot on at 1,442. The M15’s Geekbench 5 score, however, was pretty nice with 9,126 and 1,535 as its multi-core and single-core results respectively. When you are shelling out close to Rs 2,50,000 on a laptop, one would expect that the device would fly with regular tasks. Even so, on CrystalDiskMark, the 1TB M.2 PCIe NVMe SSD could only muster up sequential read and write speeds of 3,495MB/s and 3,354MB/s which is nowhere close to the 6GB/s  that I saw on the Lenovo Legion 5i (review). The M15 R6 version I have received also comes with 32GB of DDR5 RAM. As for the GPU’s capabilities in delivering high-octane gaming, I was not at all disappointed. Some of the graphically-intensive benchmarks like 3DMark’s Time Spy yielded a never-before-seen result of 10,985. The Shadow of the Tomb Raider benchmark, with display set at FHD and graphics at highest, returned a 95fps count. I tested out Cyberpunk 2077 with Ray Tracing at Ultra and got a consistent 60-65fps with a drop to about 50fps in areas of high texture output. NVIDIA’s G-Sync is available for a lag-free gaming experience and I was particularly impressed with how well Call of Duty: Cold War delivered close to 120fps with Ray Tracing enabled. Valorant and Counter Strike: Global Offensive also get the benefit of G-Sync and churned out 140fps while I had kept the resolution at QHD (1,440p). The GPU draws about 125W of power with an additional 10W of dynamic boost which does seem a bit low compared to some of the other 3080-powered laptops, but the R6’s thermal capabilities don’t let the temperatures flare up and as such, sustain high frame rates for longer times. 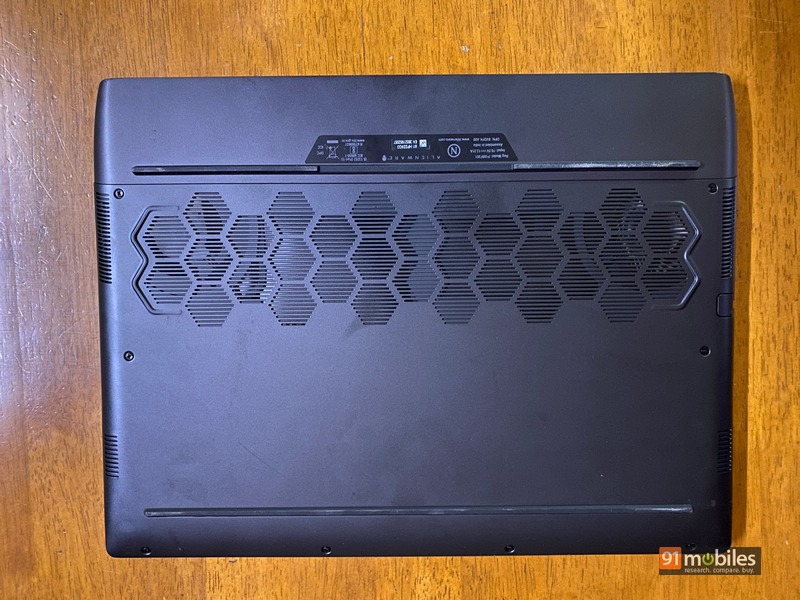 The speakers on either side of the chassis are quite loud but lack depth and bass, offering a flat sound signature. You might want to invest in a pair of good headphones for immersive gaming but for casual content consumption, the speakers are more than fine. As for the webcam quality, the 720p resolution is fairly good for Zoom calls but there is always scope for improvement. The battery life on the M15 R6 is nothing to shout about and it comes in as little surprise that the 86Wh battery only lasts about 3 hours on 60 percent screen brightness. While it is partly due to the display pushing out 240Hz refresh rate continuously, the heavy-duty internals draw a lot of power as well. The 240W charging adapter provided can take up to 2 hours to completely juice up the battery and I don’t think the target audience for the device will be using the laptop without it. 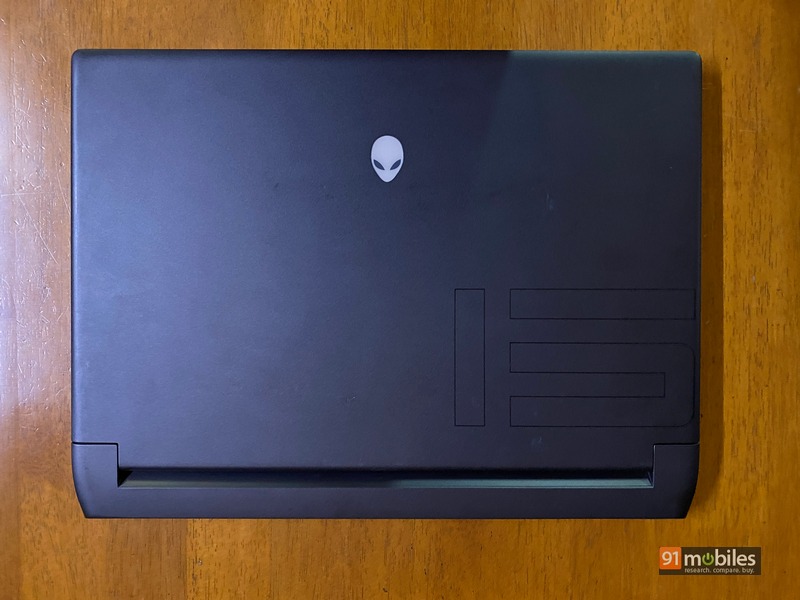 The Alienware M15 R6 is a laptop that had a lot to prove and it does so quite well. Heavy-duty gaming with sustained frame rates? Check. Excellent performance for day-to-day tasks? Check. Sumptuous visual quality? Check. Decent speakers? Check. A compelling keyboard layout? Check. The laptop has a very efficient thermal envelope that keeps the system cool and delivers quality gaming. My only gripe is the relatively low wattage draw of the RTX 3080 as compared to some other laptops which does kind of undermine the true potential of the GPU. And yeah, the screen can definitely be a shade brighter. By all means, if you are looking for a performance-centric laptop that handles graphical tasks with the utmost ease, then the Alienware M15 R6 is the machine for you.