The feeling of being truly wireless does invoke pleasant thoughts and a general feeling of freedom that’s hard to express. The TWS audio segment exemplifies that feeling, growing immensely in recent times. TWS earbuds are fun, convenient and are available across a variety of different price points, so you can get yourselves a pair (if you haven’t already) regardless of your budget. Google’s Pixel Buds A-Series land into this massively crowded arena carrying a sticker price of Rs 9,999, and like most things Google, bring some interesting features with them. 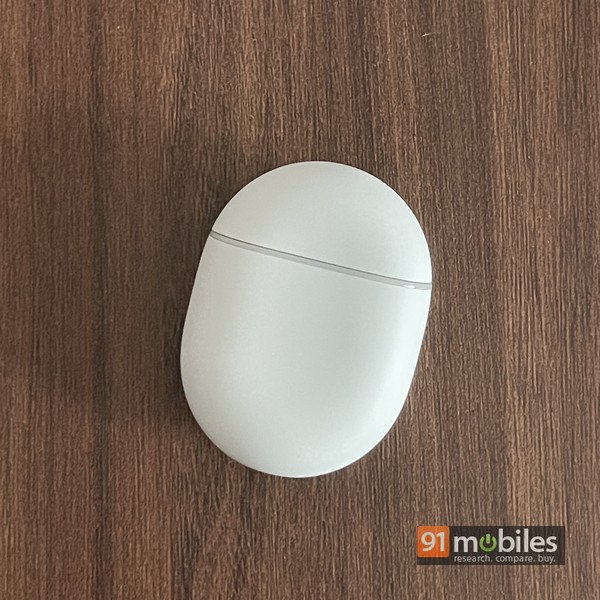 The pebble-shaped case in which the buds come ensconced feels smooth to the touch, and is quite compact too. At the bottom, you’ll find a Type-C port for charging, while a pairing button is located at the back. On the front, there’s an LED light that indicates status. Flip the lid open, and you’ll see the buds resting inside. The lid can be flipped open with one hand, and closes with a satisfying click too. The buds are held in place by magnets, and won’t fall out even if you turn the case upside down with the lid open. They feature IPX4 water resistance, so handling sweat shouldn’t be a problem. 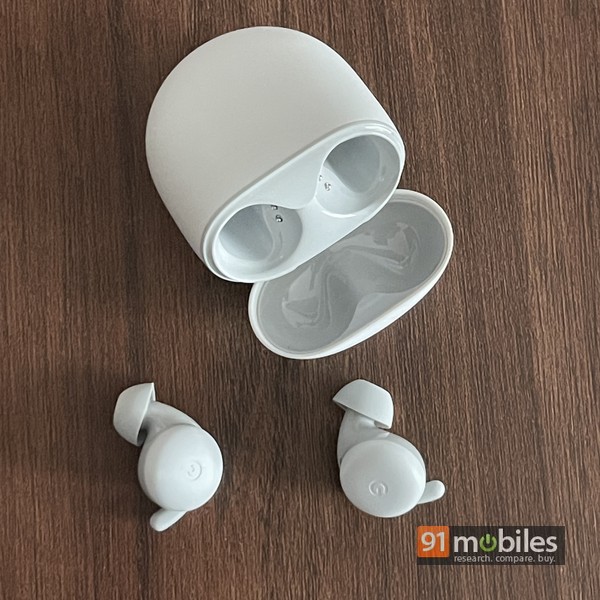 The buds themselves are small and lightweight, and feature a low-profile design that doesn’t protrude out much when you’re wearing them. Featuring a dual-tone look, the buds have a matte white finish on the outer portion, with the inner portion featuring a glossy grey finish. Each bud has a flexible, non-removable fin that provides added support while wearing. And based on my usage, I can say that the Pixel Buds A-Series offer an extremely stable fit, and are quite comfortable to wear over long periods too. However, one downside to the fins being non-removable is that they might not suit everyone, because of the simple fact that ears come in all shapes and sizes. 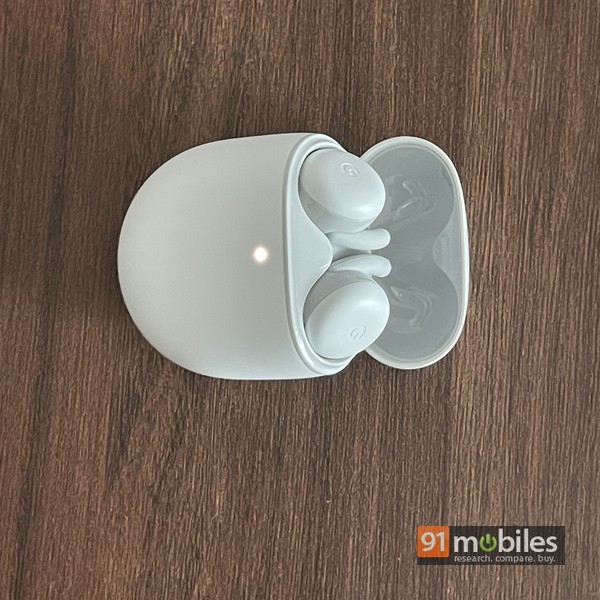 There’s no multi-device support, but you do get support for Google Fast Pair, which makes pairing the buds with supported devices a cinch. However, the first thing that’s immediately noticeable regarding the Pixel Buds A-Series is that they don’t feature active noise cancellation (ANC). This does seem a big miss, especially considering most TWS options in this price, and even lower, come with this feature. Passive isolation works reasonably well though. However, the Buds A-Series do have tons of other features in their repertoire. For one, they feature Adaptive Sound, which adjust volume spontaneously depending upon ambient sound levels, There’s extremely tight integration with the Google Assistant as well, and that can be summoned just by uttering the Hey Google trigger phrase. The flat surface on the outer portion of the buds is touch sensitive, and can be used to play/pause music, accept calls, or invoke the Assistant. There are no touch controls for adjusting volume though, and that can be achieved either from the paired device, or using voice commands issued to the Google Assistant. Using the Google Assistant’s capabilities, the Pixel Buds A-Series also enable language translation, and this works pretty well too. 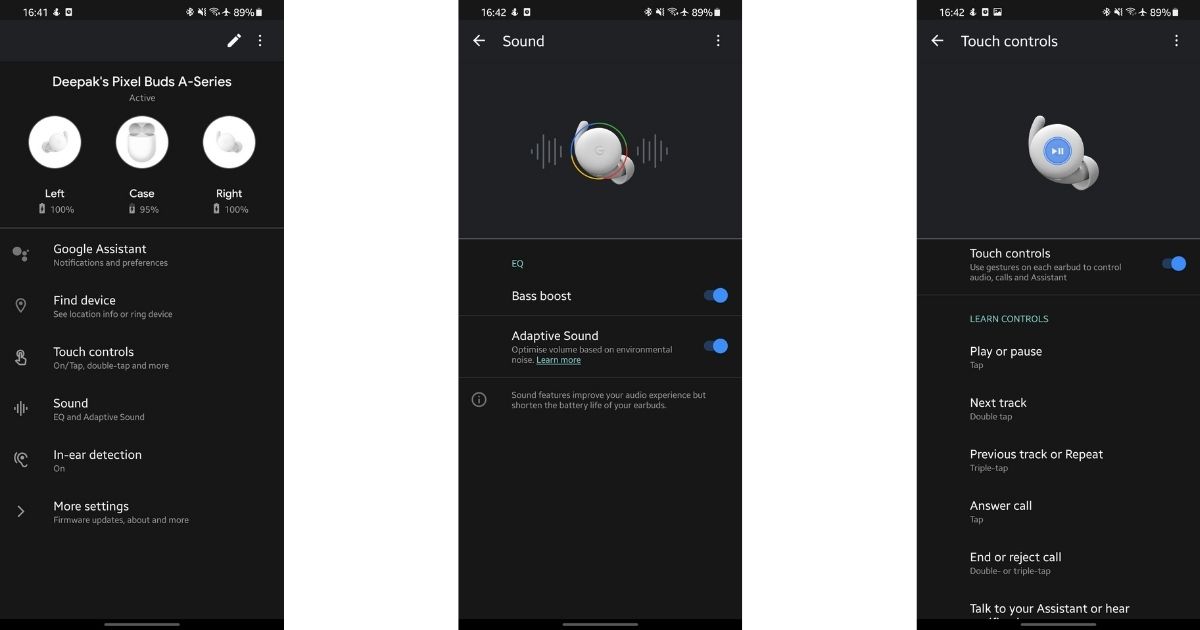 The Pixel Buds app, available on Android, lets you tweak a few settings. You can update firmware, toggle touch controls on or off, toggle Adaptive Sound, set Bass Boost on or off, and control in-ear detection. There’s no way to customise the touch controls however. Also note that the companion app is not available on iOS, so iPhone users can’t make use of these app-based options. 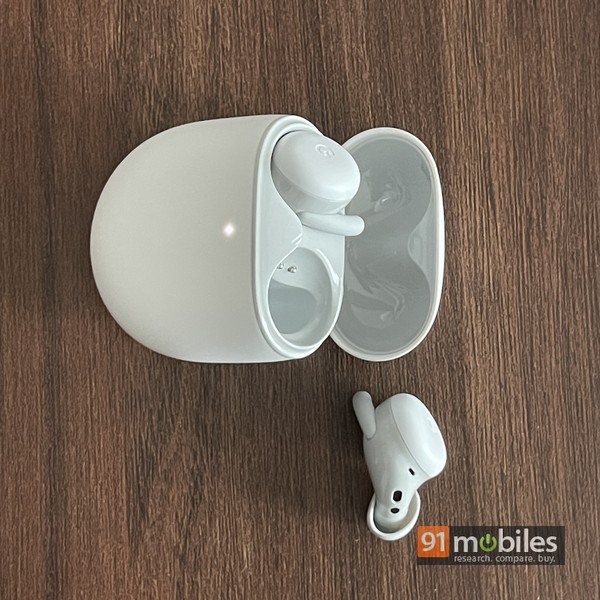 As far as the audio is concerned, the Pixel Buds A-Series are equipped with 12mm drivers, and feature support for SBC and AAC codecs. There’s no support for LDAC or aptX though. Overall, the sound signature is quite balanced, and works well in favour of vocals. The bass response is a bit muted, especially at the default EQ setting. Enabling the Bass Boost setting in the companion app could still leave you wanting for more if you’re looking punchiness and thump in your music. The mids and highs are fairly detailed though. Thanks to great audio for vocals and the dual beamforming mics, the Pixel Buds A-Series work especially well for handling calls. I actually used them for numerous calls over Google Meet and Zoom, and they handled the job extremely well.

As far as battery life is concerned, you can expect about 4 to 5 hours on a single charge, while the case should add another three to four charges. You’d need to use the Type-C port for juicing the Pixel Buds A-Series, since there’s no wireless charging. 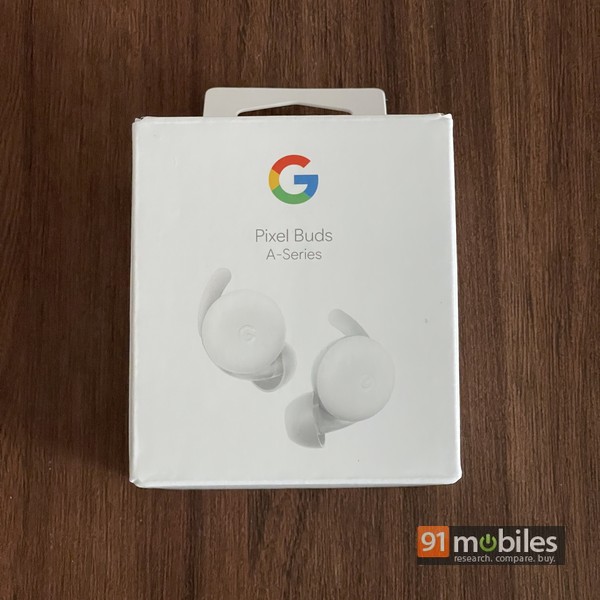 For their asking price of Rs 9,999, the Google Pixel Buds A-Series compete with the likes of the OPPO Enco X (review) and the OnePlus Buds Pro (review), both of which offer great sound quality and a generally more enjoyable sound signature. The Google Pixel Buds A-Series are worth considering for those who handle a lot of calls on a day-to-day basis, or listen to podcasts or vocals.