OnePlus’ smartphone portfolio might’ve raised a few eyebrows this year, but the company’s audio range is seemingly on an upward trajectory. In fact, CounterPoint research recently reported that the brand managed to retain the second spot in the hearables segment, thanks in no small part to the Buds Z (review), which was the best-selling model in Q1 2021. Well, striking when the iron is hot, the brand has announced yet another promising TWS dubbed the OnePlus Buds Pro. 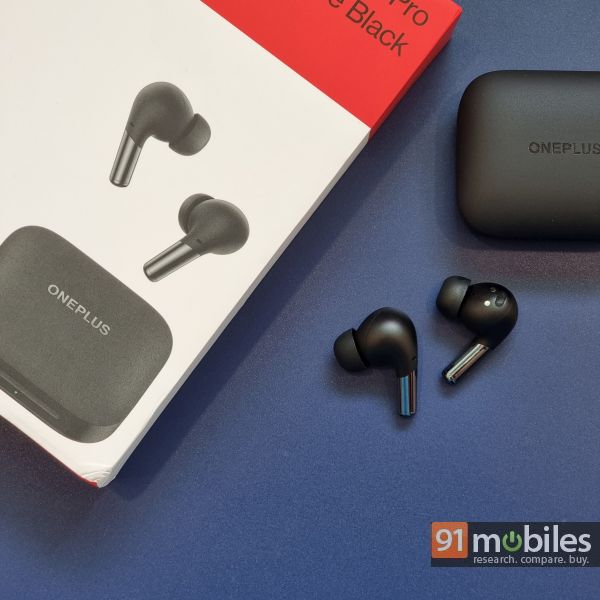 As its moniker suggests, the Buds Pro touts a slew of prosumer or enthusiast-grade features and as such, ships with a rather appealing specs sheet. But, how does that translate into real-world usage? Well, I’m glad you asked because after using the pair for a little over a week, I’m convinced that the Buds Pro outperforms most, if not all TWS headsets south of Rs 15K. Here’s why.

The OnePlus Buds Pro certainly cut a handsome package and the unit is available in two different hues, namely matte black, and glossy white. I was sent the matte-black colourway for review which, in hindsight, looks a lot less flashy, even with its shiny stem. That said, I like that the two-toned finish adds distinction to the design, and it highlights the point of contact for the Force controls as well (more on this later). 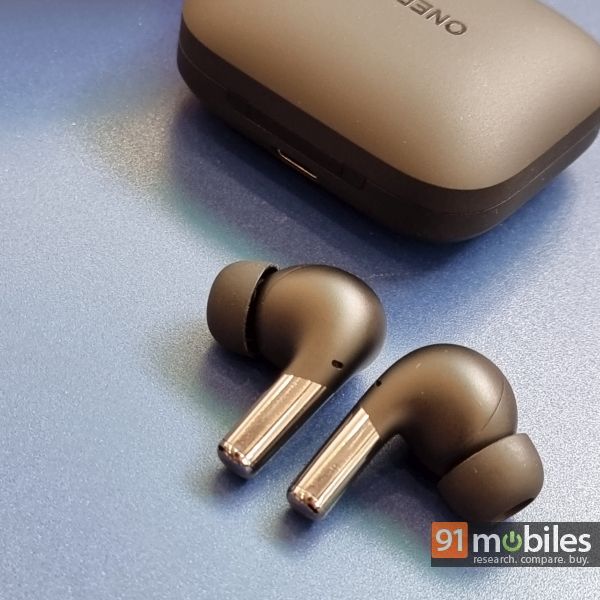 Now, the Buds Pro obviously can’t match up to the ear (1)’s translucent design which took the internet by a storm. However, having used both the earphones extensively, I can confirm that OnePlus’ offering is better equipped for day-to-day usage. In fact, you’d be hard-pressed to see any scuffs in the design shots of my review unit. The ear (1)’s casing, on the other hand, was replete with scratches and smudges by the time I got done with my review.

I’d also like to add that the OnePlus Buds Pro offers water resistance for both the case, as well as the individual earbuds. To that note, the case ships with IPX4 certification, whereas the buds tout IP55 rating. So, if you plan on using the pair in a gym, or when you’re out for a run, you will have one less thing to worry about. Speaking of which, the OnePlus Buds Pro is quite comfortable to wear too. The earpieces tip the scales at around 4.35g each, so they most certainly won’t weigh your ears down. I was quite content with the in-ear fit as well and the bundled silicone tips weren’t itchy or uncomfortable in the slightest. Rest assured, you should be able to wear the Buds Pro all day long without much hassle. 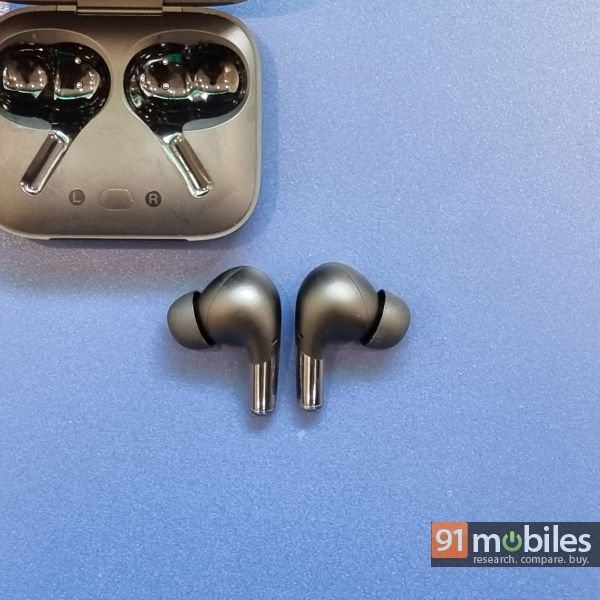 While all that’s hunky-dory, the Buds Pro’s music controls leave a tad to be desired. Now, most TWS headsets ship with touch controls wherein, the user can tap on the earbud’s stem or casing to invoke a command. The OnePlus Buds Pro, on the other hand, ships with Force controls that come into play when you squeeze the stem. Now, credit where credit’s due, the controls work well and offer excellent accuracy too. What’s more, you can remap the squeezes on the left and the right earbuds via the HeyMelody companion app as well. My only qualm with the interaction is that it mucks up the way the earphone sits in my ear and I have to constantly readjust the earpieces so they don’t fall out. 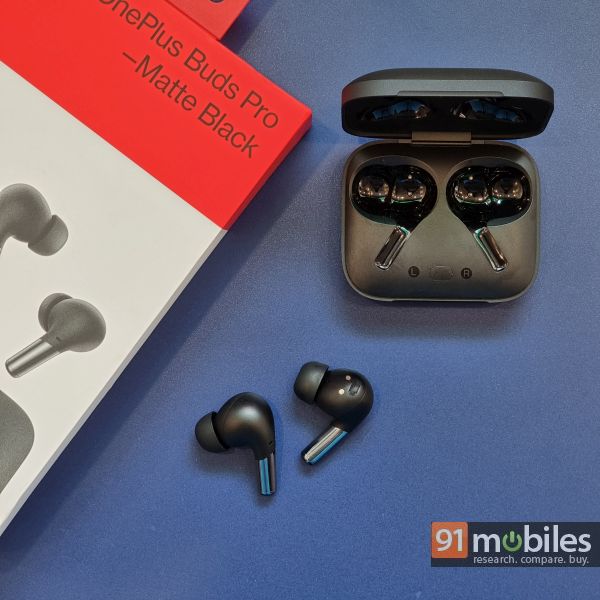 The case for the OnePlus Buds Pro offers a matte finish too, which keeps scratches and smudges at bay. The unit ships with a Type-C connector, and even supports wireless charging, which is always nice to see. That said, the hinge mechanism feels a bit loose and you can’t open the case with just one hand. More importantly, the unit doesn’t support Google’s fast pair tech either. So, the earbuds will only show a fast-pairing prompt if you’re using a OnePlus phone. If not, then you’ll have to connect your phone to the Buds Pro the old-fashioned way i.e, by going into the Bluetooth settings and selecting the Buds Pro from the list of available devices.

You can use the HeyMelody app to finetune the controls on your Buds Pro. The app also offers a slew of other features and will come in handy for when you want to upgrade the Buds’ firmware, etc. Of course, you can also switch between different ANC modes and take OnePlus’ Audio ID and earbud fit tests, which in theory, should help the earphones understand the way you hear different frequencies. Now, I didn’t find much use for the same as the earphones sounded brilliant from the get-go, though the feature is there for you to try.

You’ll also be able to download new soundtracks for the OnePlus Zen Air mode from within the HeyMelody app. For the uninitiated, the Zen Air mode offers a list of white noises that should alleviate stress and help you sleep better. I was quite excited to use the same until I unboxed the OnePlus Buds Pro. You see, the Buds Pro protrudes outwards quite a bit and therefore, I found the pair quite uncomfortable to wear to bed. But, if you do plan on using the feature, I’d recommend you try the Nighttime camping track, as it sounded the most relaxing. 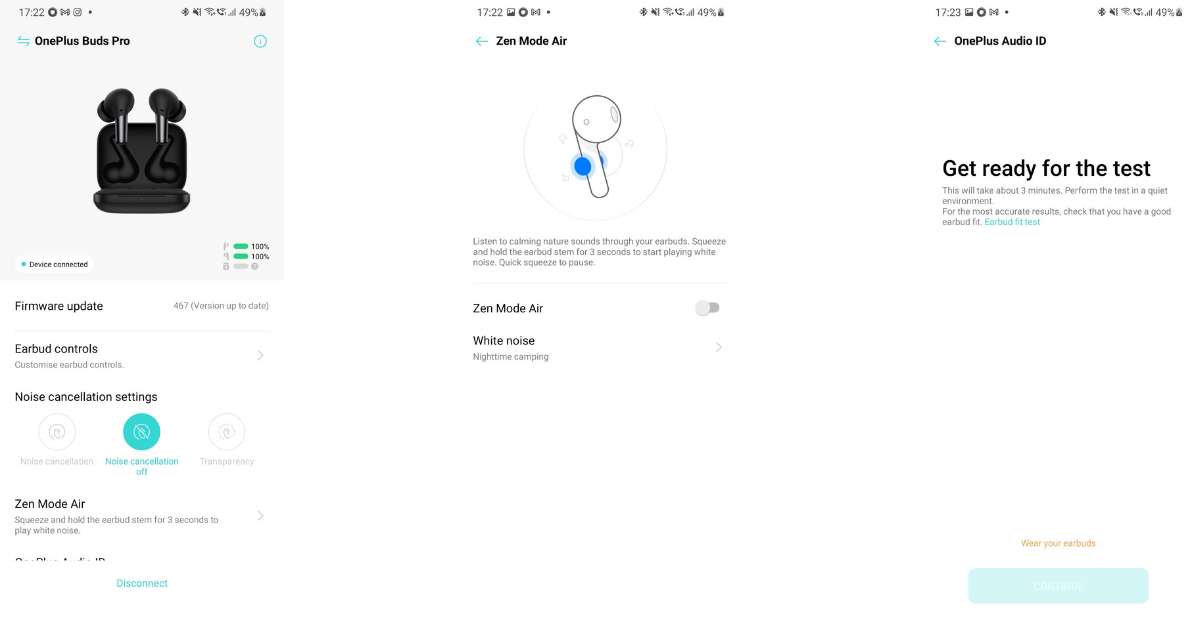 The Buds Pro can drown out a lot of noise and offer what I’d consider really good ANC, at least for the price. OnePlus even lets you variate the level of noise cancellation and you can choose between an Extreme mode (up to 40dB), or a Faint mode (up to 25dB). Or, if you’re like me and don’t want to constantly fiddle with the earbud’s stem, then you can simply turn on Smart ANC, which automatically varies the noise cancellation based on your surroundings. In my testing, I found the noise cancellation to be quite good and on par (if not better) than the competition, the likes of which include OPPO’s Enco X (review) and Jabra Elite 85T. In fact, the earphones had no trouble drowning out the noise of utensils being used in the kitchen or lessening the commotion in the living room, where my pet usually sits and barks all day long.

I didn’t stumble across any connectivity issues during my stint with the Buds Pro either and the unit retained a solid Bluetooth connection with my paired devices. What’s more, the Buds Pro is quite handy to take calls on the fly too and the mics do a serviceable job of relaying your voice over to the other end. I for one didn’t hear any complaints from folks over at the other end of the line.

Coming to the meat of the matter, the OnePlus Buds Pro ships with a pair of 11mm dynamic drivers positioned inside each earpiece. The earphones can operate across a frequency range of 20Hz-20KHz and support SBC, AAC, and LHDC audio codecs. 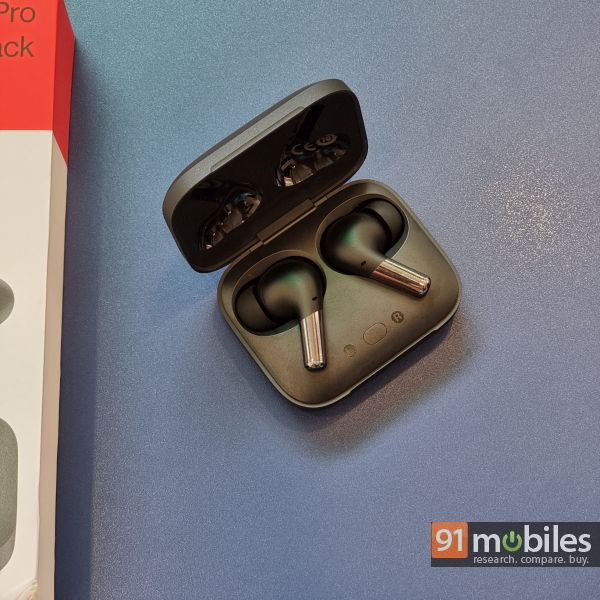 I won’t beat around the bush at all – OnePlus has really outdone itself this time around and the Buds Pro are among the best-sounding TWS headsets under Rs 10,000. Heck, the earphones can go head to head with some pricier offerings too. To give you some context, I swear by OPPO’s Enco X TWS headset which retails for the same price as OnePlus’ offering. Now, the Enco X earphone makes use of a dual-driver array, and the earphone’s sound signature sways in favour of highs, or the treble. The OnePlus Buds Pro’s sound signature, on the other hand, sways in favour of the low-end which makes it a tad more enjoyable to use. The icing on the cake is that the Buds Pro draws parallels to the Enco X in terms of clarity – so, unlike the herd of other bass-focussed TWS headsets, the OnePlus Buds Pro’s low-end doesn’t muddy the soundtrack, or cast a shadow over other frequencies. In other words, OnePlus has figured out a way to make discerning listeners enjoy bass, rather than loathe it. 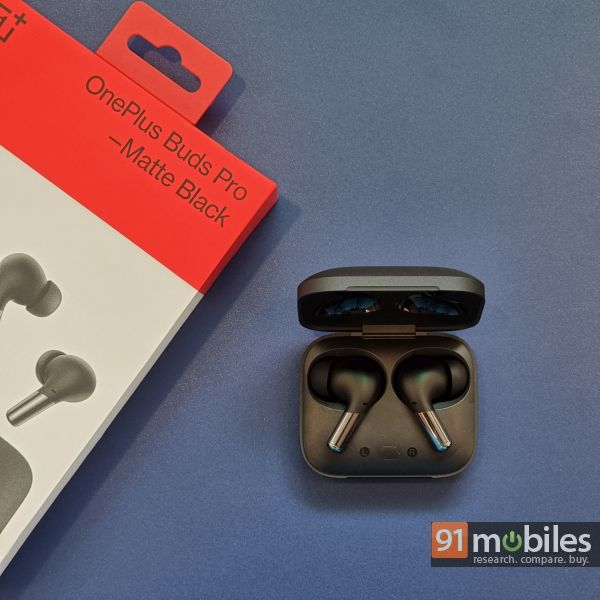 Take Lil Nas X’s Holiday, for instance, which kicks off with a powerful, punchy beat. Here, the OnePlus Buds Pro reciprocates the slam to a tee and the beat feels extremely tight. More importantly, the earphones don’t mask the vocals and the texture of the singer’s voice doesn’t change even when it’s being relayed alongside the beat. Turn the page over to a song with a lot of sub-bass like James Blake’s Limit To Your Love and here, the Buds Pro’s strengths become more apparent. Case in point, the beat drop after the second verse (at around the 55th second) which exemplifies the Buds Pro’s ability to not just output a powerful, thumping slam, but also highlights how well the pair transitions from one beat, to the next. In short, the Buds Pro offers minimal decay, thereby ensuring a beat doesn’t linger on forever. And, the bass extension here is nothing short of remarkable either. The sub-bass, for instance, kicks in at about the same time as the beat drop and EDM-heads will absolutely love how it rattles the Buds Pro against their ears.

The mids sound stellar too. In fact, if you’re a fan of acoustic-heavy tracks from artists like Tom Walker, then you’ll find plenty to like here. For one, the Buds Pro aren’t sibilant at all, so words ending in an ‘S’ won’t hiss or shriek in your ears. Moreover, the earphones map the entire vocal range of an artist too. So, be Gabbie Hanna’s steadily rising pitch in Honestly (Encore), or Leonard Cohen’s deep, low voice in First We Take Manhattan, the music being relayed to your ears will sound authentic and detailed. The highs, on the other hand, aren’t remotely as sparkly as what you’d experience with the Enco X. On the bright side (no pun intended), the unit’s imaging makes it so that rock songs don’t sound garbled or muddy. 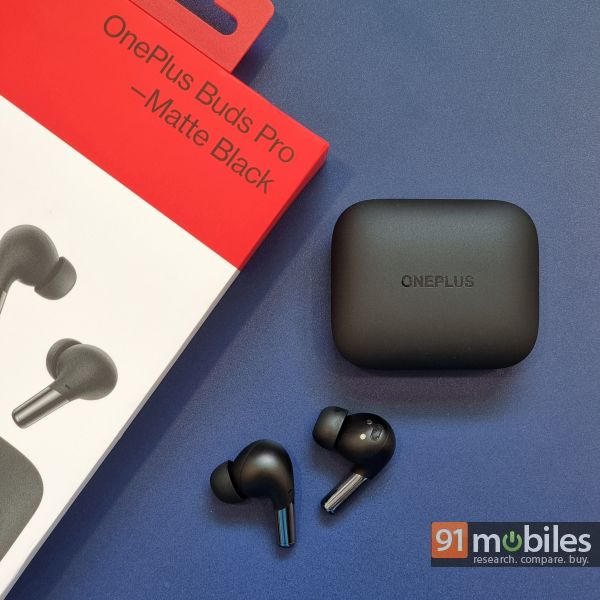 As good as the Buds Pro’s sound quality is, I should point out that the pair acts out when listening to music over the LHDC codec. To that note, the low-end goes for a toss and sounds quite echoey and boom-y. I tested the same on both, the Mi 11 Ultra, as well as the Realme GT, and my experience was the same on the two devices. That’s quite disappointing, as the LHDC codec does in fact, allow the Buds Pro to relay more information over to the ears. I hope OnePlus is working on a fix, as streaming over a higher-bandwidth codec would improve the Buds Pro’s sound quality tenfold.

As for the battery backup, the OnePlus Buds Pro managed to last me a little over five hours off a single charge. Do note that I wasn’t always using the Buds with the ANC turned on and even when I did toggle the feature, I had it set to faint mode. Regardless, the Buds Pro should offer a couple days worth of battery backup, which is great.

The OnePlus Buds Pro retail for Rs 9,990 in India and for the price, is a no-brainer for anyone looking for a pair of premium TWS earbuds. The earphones sound terrific and aren’t just a great option for those who enjoy thumping, voluminous bass, but also for listeners with an eye (or in this case, an ear) for detail. Simply put, the OnePlus Buds Pro strike the delicate balance between fun and analytical listening. The cherry on top is that the Buds Pro also offers impactful ANC, solid battery life, and a stylish design. So, unless you’re seeking a TWS headset with a more balanced sound output, you should pick up the OnePlus Buds Pro. Else, the OPPO Enco X is still the most well-rounded, balanced-sounding TWS headset under Rs 10K.