Over the last few years, Huawei has racked up a good chunk of the wearable business in India, and for good reason. After all, the company’s wearables offer scores of features and are priced rather competitively too. Take the company’s latest Huawei Watch Fit for instance, which ships with an AMOLED display, offers built-in GPS, is capable of SpO2 and heart-rate monitoring, and touts a boatload of fitness tracking features, all for Rs 8K. Understandably, the spec sheet, while good, might appear too good to be true, so in this review, let’s take a closer look at the device to see if it’s actually worth your bucks.

Huawei knows a thing or two about designing good-looking products and the company’s latest wearable is a head-turner too. Now, the Watch Fit is, for the most part, a slightly bigger Huawei Band 6 (review). To that note, the Watch Fit also ships with a rectangular dial that looks rather chic and classy on the wrist. Unfortunately, I was sent the version with black accents and straps. That said, the device is available in more colourful hues too, including an isle blue shade that – at least in the photos – looks particularly charming. 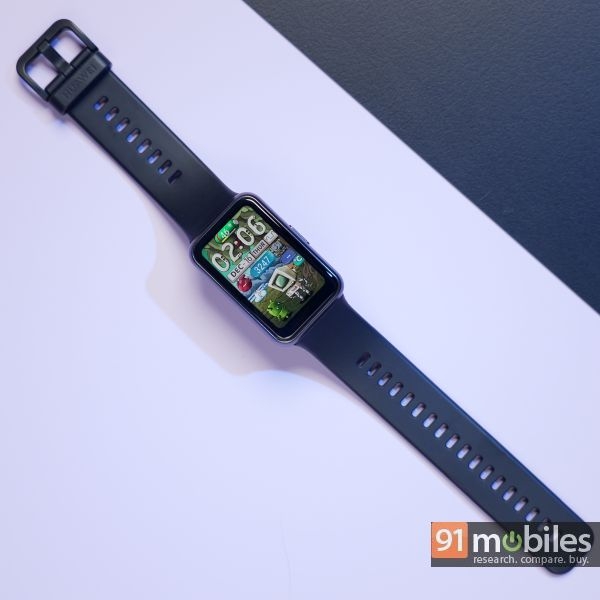 Thankfully, unlike the Fitbit Charge 5 I reviewed recently, the Watch Fit offers a physical toggle on its right-hand spine, ensuring you don’t have to resort to finicky touch controls to exit a workout or open up the app drawer. Moreover, unlike most smartwatches, the Huawei Watch Fit is featherlight and tips the scales at just 21 grams. Even if you add a couple of grams for the straps, the Watch Fit is still substantially lighter than most fitness wearables/smartwatches in the market. As a result, the device makes for a fantastic fitness tracker and I never faced any discomfort whilst wearing it day in and day out. Moreover, working out with the wearable strapped to my cuffs didn’t pose any issues either as the tracker’s chamfered edges and soft plastic back ensured the device didn’t bite or itch my wrists. And, fret not – the Watch Fit is IP rated up to 5ATM, so you shouldn’t worry about the tracker conking out when sweating it out at the gym.

The Huawei Watch Fit’s display is arguably its biggest selling point and the tracker ships with a 1.64-inch, AMOLED screen that packs in 456 x 280 pixels. The display is plenty sharp and offers wide viewing angles too. Consequently, the text from the notifications appears crisp and is legible off-axis as well. Moreover, unlike some rival fitness trackers, I didn’t find the display on the Watch Fit to be too cramped. 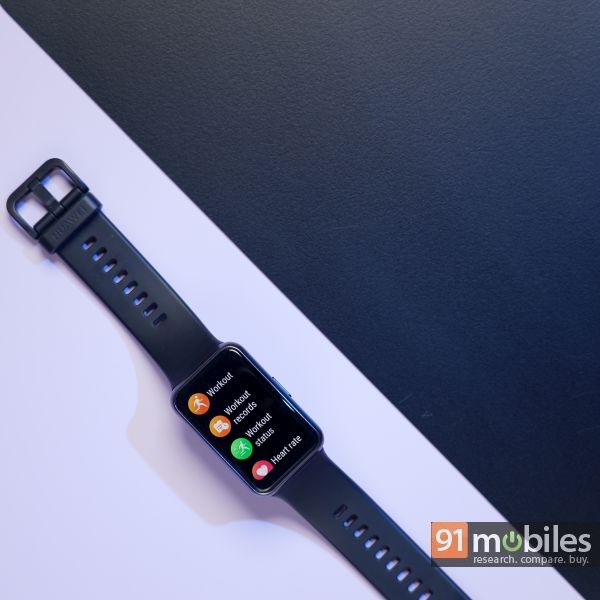 So, be it navigating around the UI, or scrolling through my notifications, the Watch Fit’s screen was plenty accommodating for my pudgy fingers. Moreover, the company has bundled a ton of colourful watch faces with the device that complements the unit’s OLED panel quite well. You even get the option to tweak the complications on select watch faces, which is neat. Moreover, the wearable also supports Always-on Displays, though using the same will take a good chunk out of your battery backup. Thankfully, the device’s ‘raise to wake’ feature worked rather admirably, thereby mitigating the need for an AoD, to begin with. 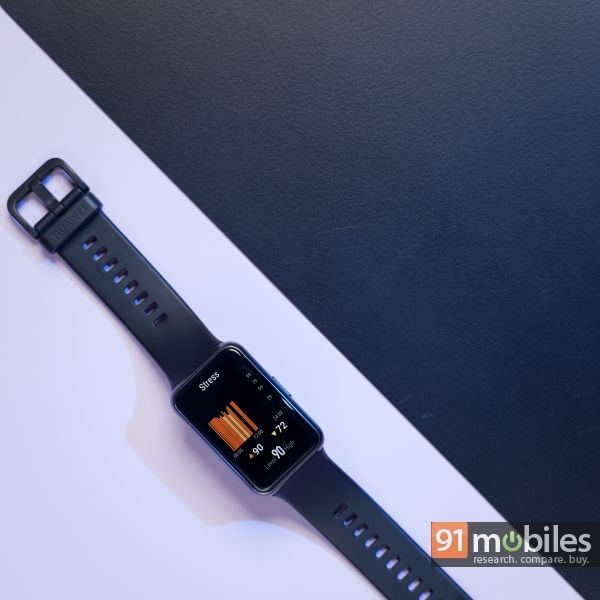 I’d like to add that the display gets plenty bright for outdoor usage too. Moreover, the screen is quite responsive as well, albeit the UI can feel a bit laggy at times. So, while the panel will pick up on your swipes and taps without any hassle, the animations appear quite stuttery. I do hope the company fixes the same with a software update, as it would dramatically improve the end-user experience.

The Huawei Watch Fit is a capable fitness tracker, although the wearable’s smart features leave something to be desired. But, before I get into that, you should know that the Watch Fit can work with both Android phones as well as iPhones. I, for one, paired the device to my iPhone 13 and I didn’t run into any connectivity issues whatsoever during my stint with the wearable. What’s more, the companion app offers a user-friendly UI and presents all your fitness stats in neat, spaced-out tiles. Tapping on a tile gives users a ton of data for their workouts, or sleep cycles. I quite like this approach as the wearable doesn’t bombard the user with random stats the second they open up the app. Instead, you can pick and choose facets of the Watch Fit’s tracking you’d like to gloss over or understand in more detail. 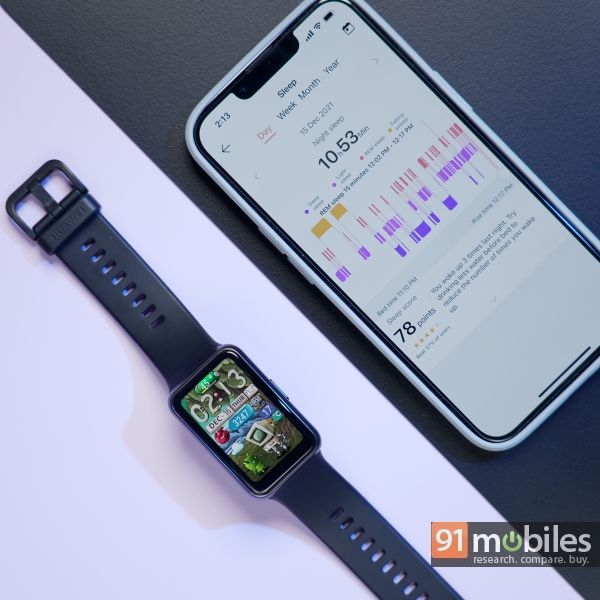 With that out of the way, let’s take a closer look at what the Watch Fit can and cannot do. First and foremost, the wearable can relay notifications from your phone to your wrist. Moreover, there was no delay to speak of either and the device would buzz my wrists the second I got a notification on my phone too. Unfortunately, select apps like Slack don’t have a custom notification app icon and instead, the watch uses a generic messaging app logo. More importantly, you cannot revert to any notification from the watch’s interface, which is a huge bummer, considering the wearable’s price. But, I digress. 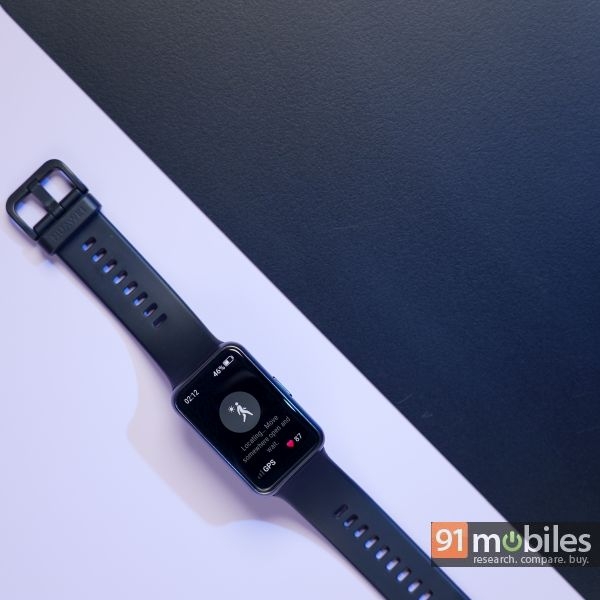 Other than that, the Watch Fit supports music playback for Android phones, but I couldn’t get the same working on my iPhone. The wearable also doesn’t ship with NFC for contactless payments. On the bright side, the unit’s fitness tracking capabilities were to my satisfaction. For one, the Watch Fit counts steps with reasonable accuracy. Moreover, the device doesn’t add ghost steps to the daily step count tally either, which is great. I’d also like to add that the Watch Fit ships with built-in GPS, thereby allowing users to map their runs without using a smartphone. Adding to the list of pros, the Watch Fit latches on to the GPS signal in a matter of seconds and the device mapped my daily outdoor walks with utmost precision too. 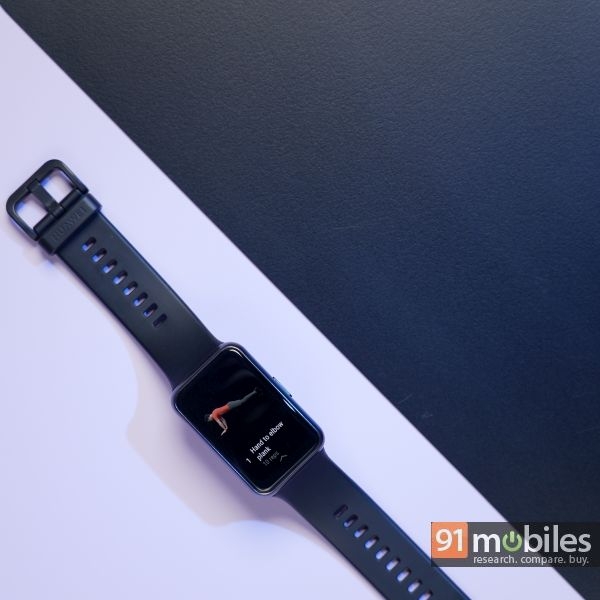 Interestingly, the wearable ships with a bunch of fitness courses (12, to be precise) with workout animations. You can tap on a fitness course of your liking and then refer to the on-screen visuals to understand the exercises better. I personally found the fitness and running courses to be a great addition to the Watch Fit’s arsenal. As someone who works out at home, I am always on the lookout for some new exercises and I found a couple in the advanced chest workout course which were quite helpful. So, if you do end up buying the Watch Fit, take some time out to explore all the different fitness courses – I’m sure you’ll learn something new. 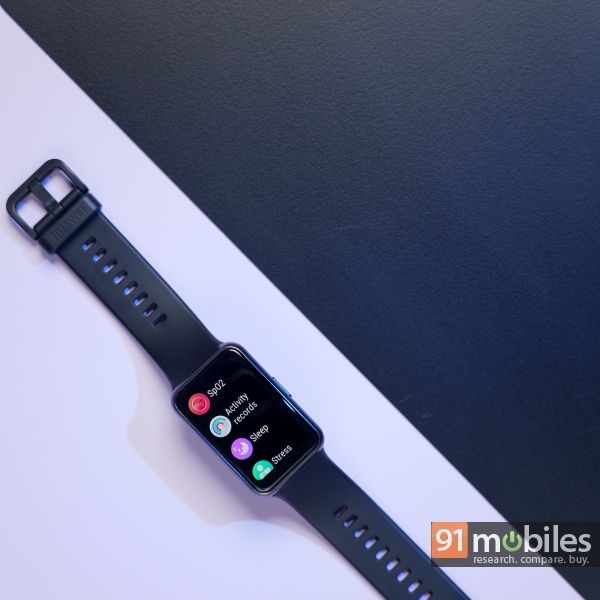 Moving on, the device also offers on-demand SpO2 and heart-rate tracking, the results for which were on par with other fitness trackers I had on hand. The wearable will also buzz your wrist with activity reminders, and you can even engage in breathing exercises from the watch itself, on the off chance you’re feeling stressed/agitated. Last but certainly not least, the Watch Fit does a commendable job at tracking the user’s sleep cycles. The sleep breakdown is divided into light, deep, and REM sleep and I found the data to be quite accurate, so no complaints here. 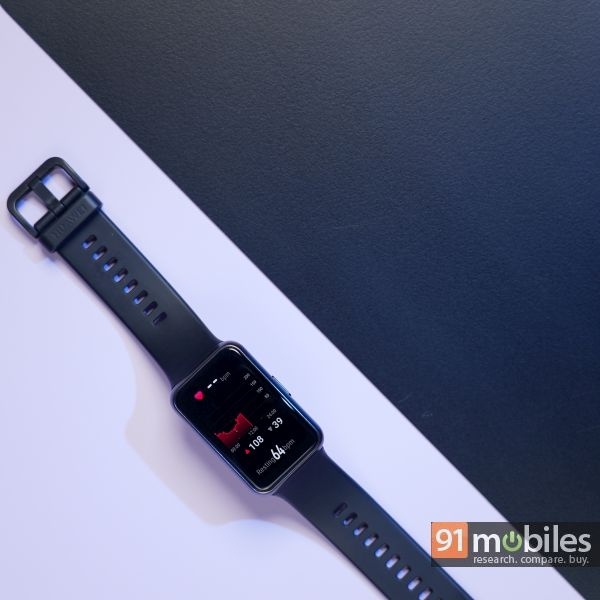 As for the battery backup, Huawei claims the Watch Fit can last up to 10 days off a single charge. In my testing, the wearable lasted me around four-five days and that’s with the screen brightness set to auto and notifications enabled. The icing on the cake is that the wearable takes less than an hour to refuel completely, which is great.

The Huawei Watch Fit retails for Rs 8,999 in India and for the price, has a lot going for it. To that note, the wearable offers a stylish, comfortable design along with a gorgeous AMOLED display. I was more than satisfied with the unit’s fitness tracking capabilities too and the Watch Fit’s battery backup was to my liking as well. Unfortunately, the wearable fails to impress with its smart features and I would’ve liked to see support for quick replies for select messaging apps like WhatsApp. 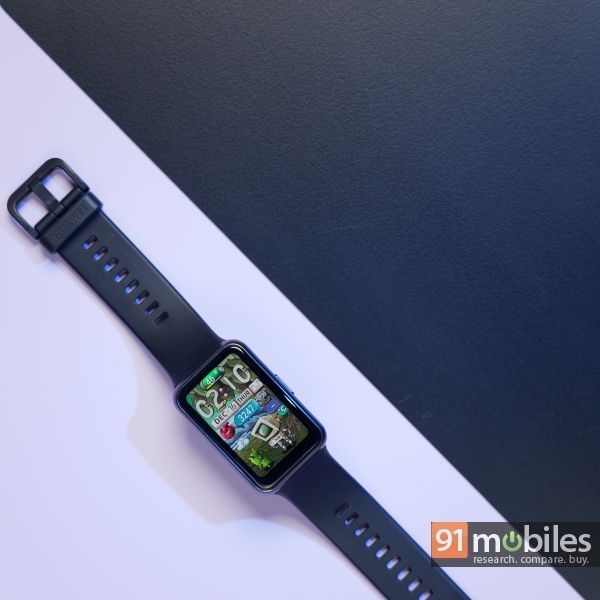 Furthermore, the company’s Band 6 can give the Watch Fit a run for its money too. In fact, barring a built-in GPS, the Band 6 offers the same features as the Watch Fit, albeit costs much less. Regardless, the Watch Fit hits more than it misses and is a solid fitness tracker to consider under Rs 10K.