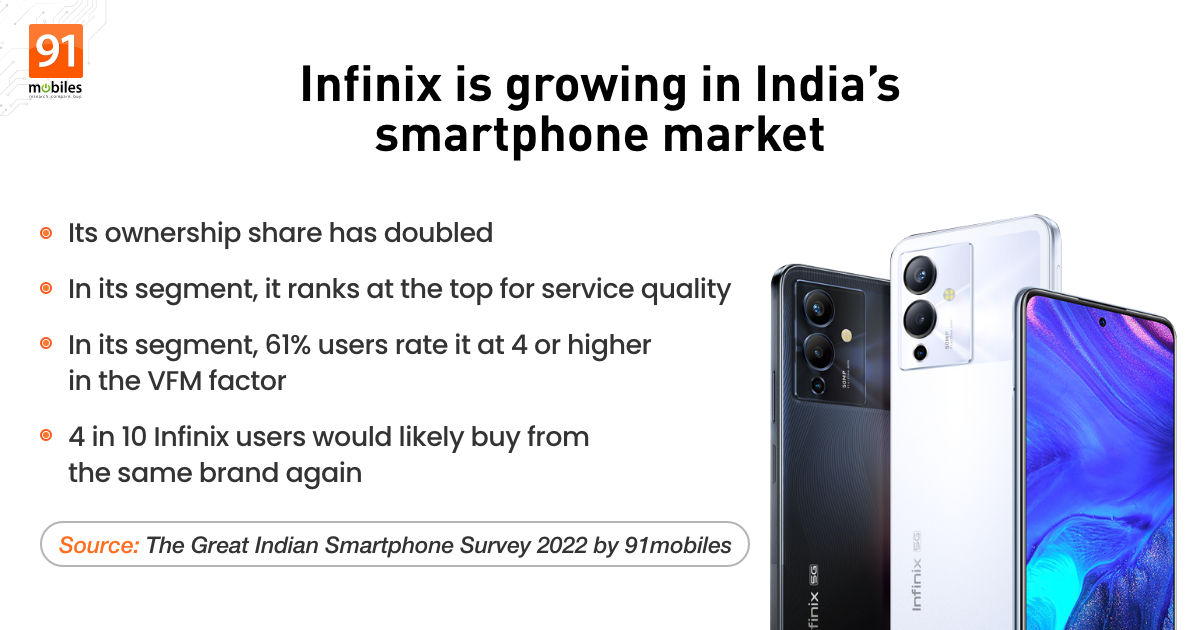 Our annual Great Indian Smartphone Survey gives us a macro view of the burgeoning handset market in the country. At the surface level, it may seem like the biggies such as Samsung, Xiaomi, Realme, OnePlus, and Apple are dominating India’s smartphone market. But it’s only when we look at the data, we realise how the ownership share of some of these phonemakers is declining, how consumers are responding to launches from other brands, and more. In fact, we recently highlighted how Motorola is managing to regain its market share after it has almost left the turf.

Today, we want to shed light on another brand that’s been steadily growing in the subcontinent – Infinix. What differentiates it from others is that it defies a lot of norms – it’s a Hong Kong-based brand, and focuses solely on the voluminous affordable segment. Let’s take a closer look at how the Transsion-owned Infinix is faring, as per the responses of 15,000+ users. 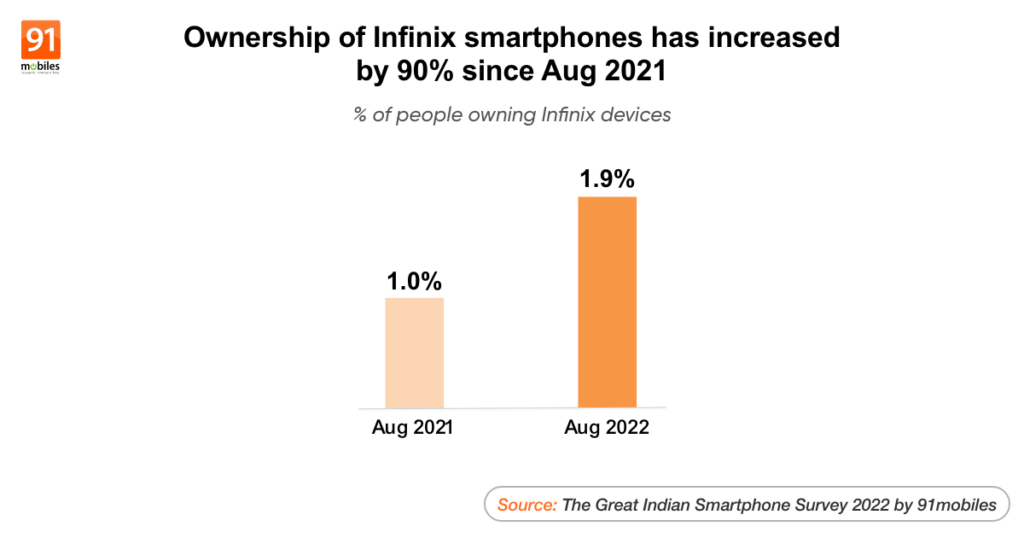 In August 2021, people who owned Infinix stood at 1 percent. Cut to this year, and that share has almost doubled to 1.9 percent. The fact that this is similar to the ownership share of Motorola, which has a huge legacy in India’s smartphone market shows that Infinix’s offerings are managing to strike a chord with consumers. 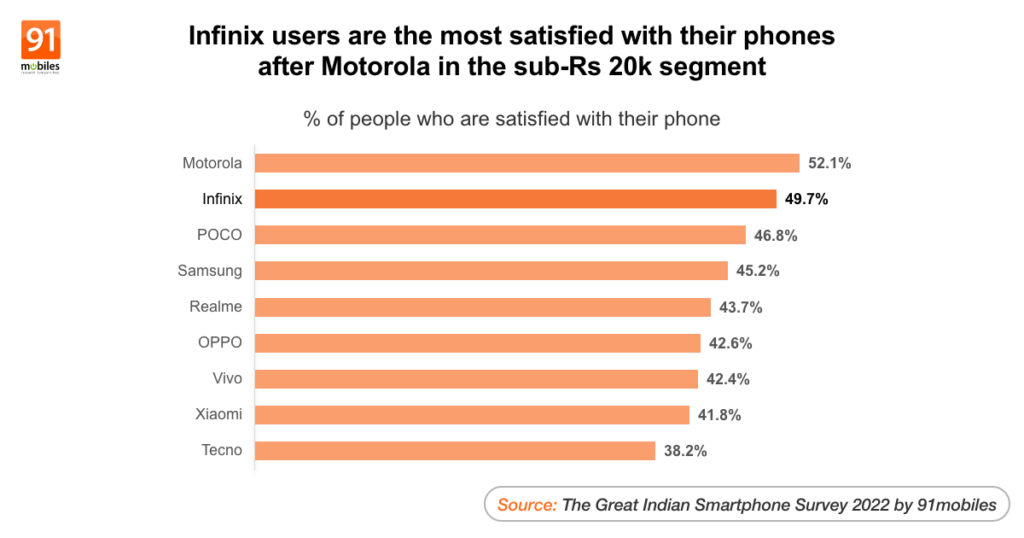 The Great Indian Smartphone Survey doesn’t just focus on ownership and how that might change in the future, but also uncovers users’ satisfaction with respect to the phones they own. This throws up some interesting results. 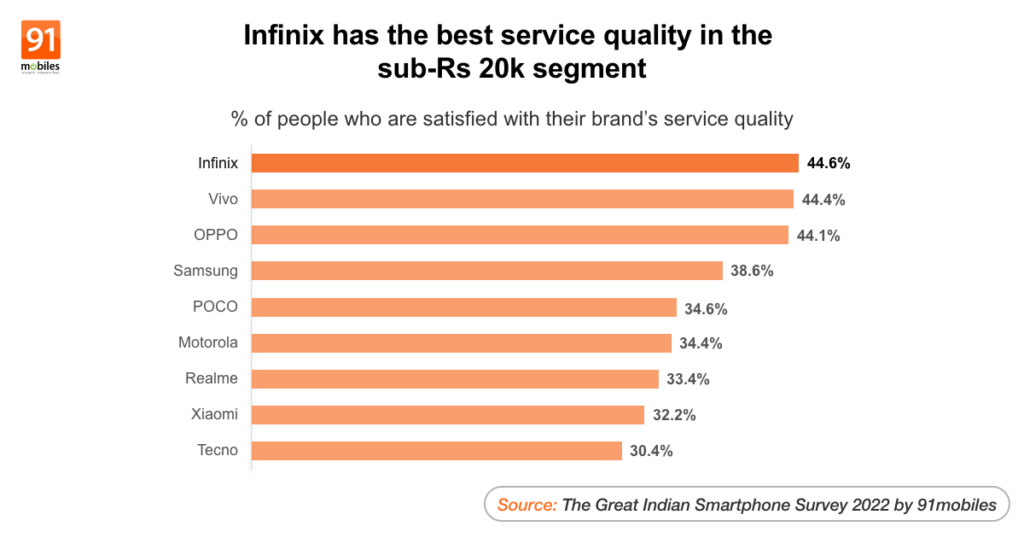 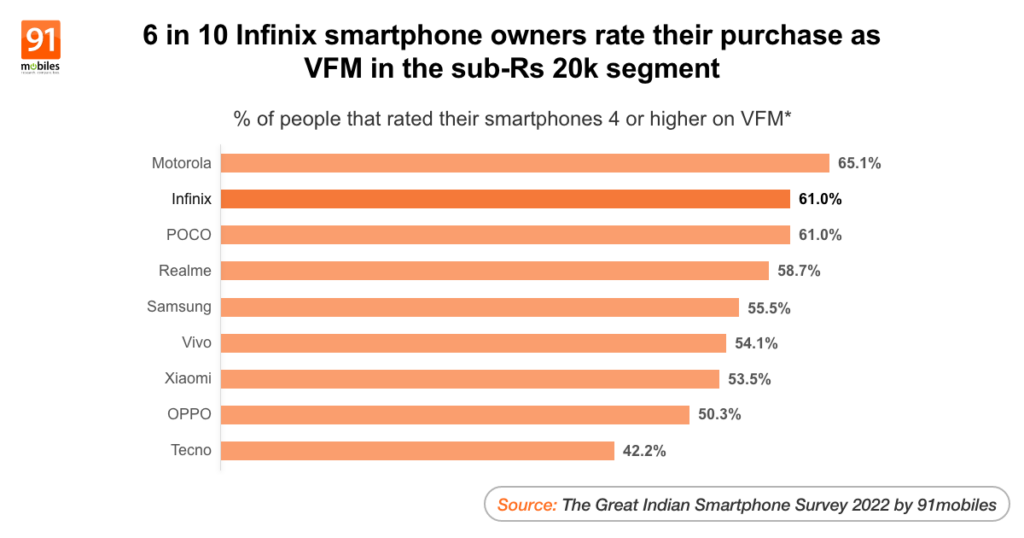 So what do the satisfaction levels mentioned in the previous section reflect? For one, it highlights that Infinix users are satisfied with the experience provided by the devices they own. But consumers should also vote with their wallets, which is why it’s interesting to see what percentage of people would likely buy from the same smartphone brand when they upgrade next. 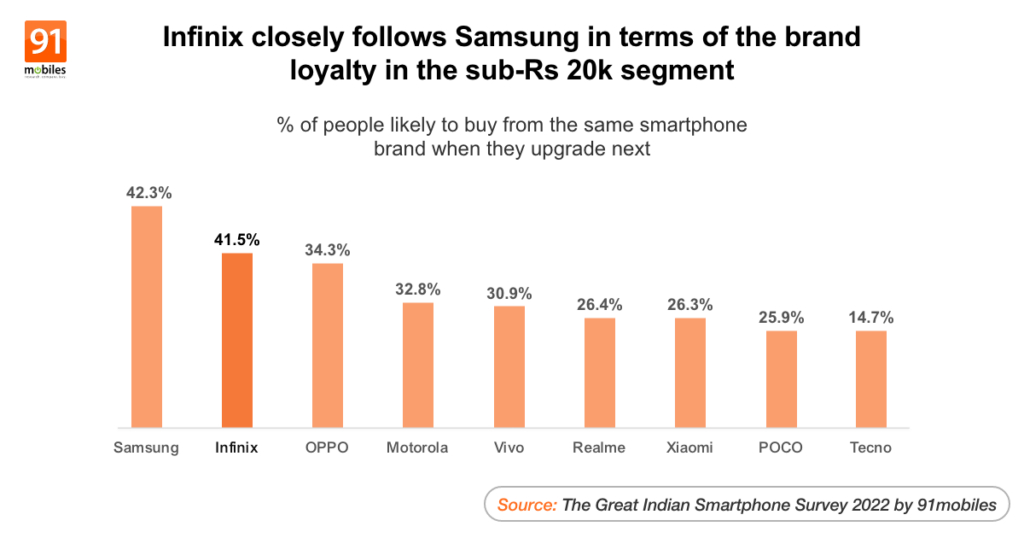 Unsurprisingly, 41.5 percent of Infinix owners will likely upgrade to a smartphone from the same brand, which is impressive as it’s second only to leading phonemaker Samsung.

Since 91mobiles is used by millions of prospective buyers every day to research the ideal device they could purchase, analysing that data also provides a lot of insights. And we wanted to see if that matches with the observations we made from the Great Indian Smartphone Survey. 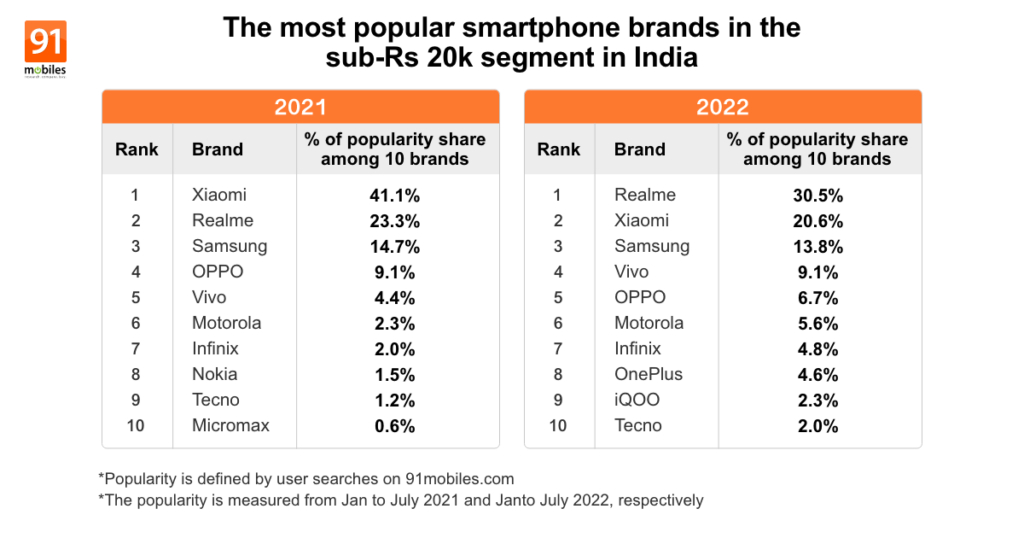 So the first thing we checked out was the popularity levels of smartphones under Rs 20,000 in 2021 and 2022 and whether Infinix has seen any growth. Well, the answer is yes. While Infinix continues to be at seventh position, its ownership share has increased ~2.5x to 4.8%. Interestingly, it’s placed just behind Motorola.

Considering how these two brands are closely matching each other across various factors, we foresee an exciting battle will be fought between them in the times to come.

#InfinixDhamakaContest: Answer 2 simple questions and get a chance to win exciting prizes each week!