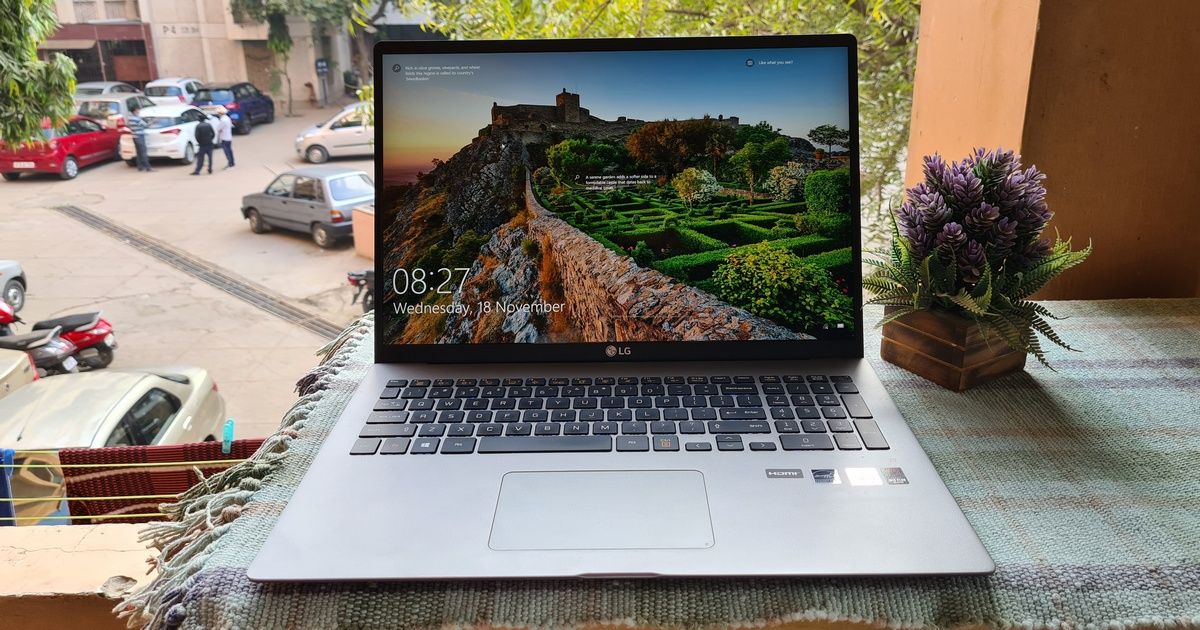 Steve Jobs sold the world the idea of a laptop that can fit inside an envelope, and it went on to become an iconic device. The PC world has tried to emulate the MacBook Air’s success with mixed results. It is hard to find the right combination of weight, portability, and performance packed inside a reasonable price tag. LG’s take on this comes in the form of the Gram. The new LG Gram 1 relies on a thin chassis and lighter build material to make for a more portable and ergonomic work machine. Now it may not have the fanciest of internals but you do get a 17-inch display, something that is as rare as it comes in the ultrabook world. Priced at Rs 1,40,000 the laptop faces stiff competition, not the least from the latest M1 MacBook Air. Here is my full review of the LG Gram. 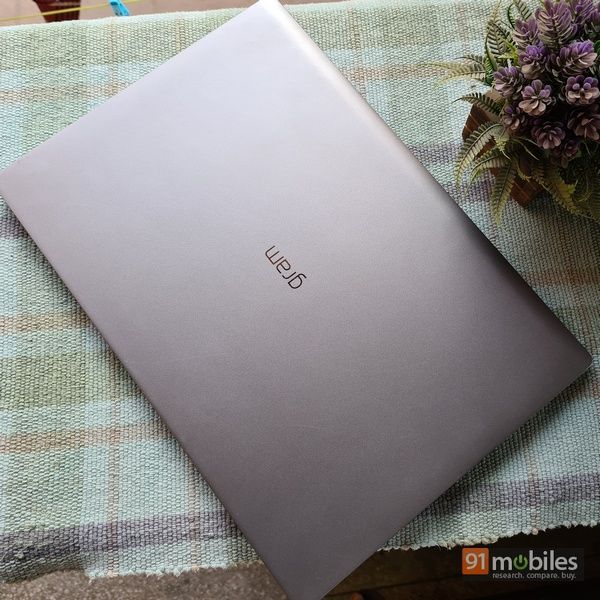 Right out of the box, the LG Gram looks like a much heavier device than your average ultrabook. The plastic unibody design doesn’t feel very robust, and this feeling carries over to the hinge. However, it’s this light plastic chassis that gives the LG Gram an incredible weight of just about 1.3kg. That is lighter than most laptops on the market, including the early 2020 MacBook Air. Even more amazing is the fact that LG has managed to cram a 17-inch display inside this ultralight design. The thin bezels allow the screen to occupy a smaller area but this is by no means a small machine. I did have some difficulty in properly placing the laptop in my bag due to its size. The Gram 17 may not be as slim as the MacBook Air or the Acer Swift 7, but its feather-like feel while carrying more than makes up for it. The Silver variant is the only option available for purchase and it is a little bland in my opinion. A fingerprint sensor is integrated into the power button. The tiny 1.5-watt stereo speakers are placed on the bottom, while the webcam is placed in the top bezel.

It is hard to stress just how light the LG Gram actually is. I can easily balance the entire machine on two fingers and a thumb. During these work from home times, it is a blessing to be able to carry your work station around the house with negligible effort. I mean you could very easily just carry the Gram to a nearby park to sunbathe on a cold winter afternoon without a second’s hesitation. The 17-inch screen allows you to open a lot more Chrome tabs and have more windows open at the same time. Unless you prop your laptop on a desk the entire time, the mobility you can get with something like the LG Gram is quite understated, that too with such massive screen real estate at your disposal. 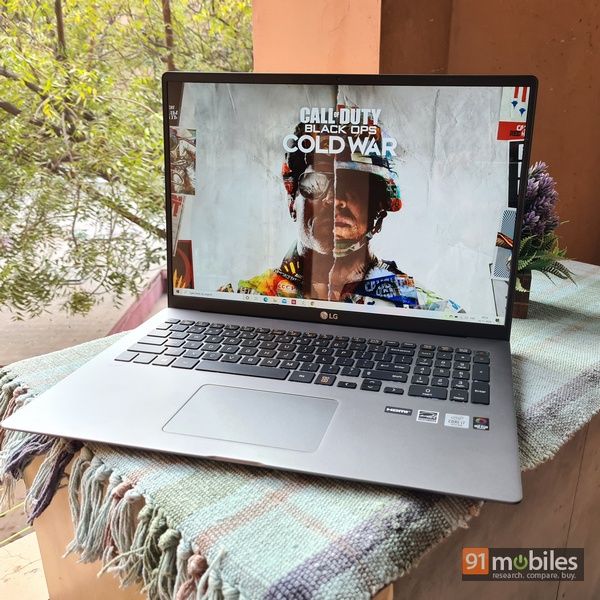 I haven’t used LG laptops before but I do have an LG smart TV which has one of the crispest panels I have seen. Therefore it comes as little surprise that the LG Gram has an extremely vivid and bright display of its own. It has a resolution of just above 2K at 2,560 x 1,600 and the panel is a regular IPS LCD which has very good viewing angles. There’s of course the fact that you get an expansive 17-inch viewing experience which is just delightful thanks to unintrusive bezels. Unfortunately, the display isn’t a touchscreen, which is pretty much a given for quite a few Windows ultrabooks in this price range. Brightness levels were never an issue on the LG Gram and the device was very consistent with colour accuracy. Overall an excellent machine for viewing content and some light photo editing as well. 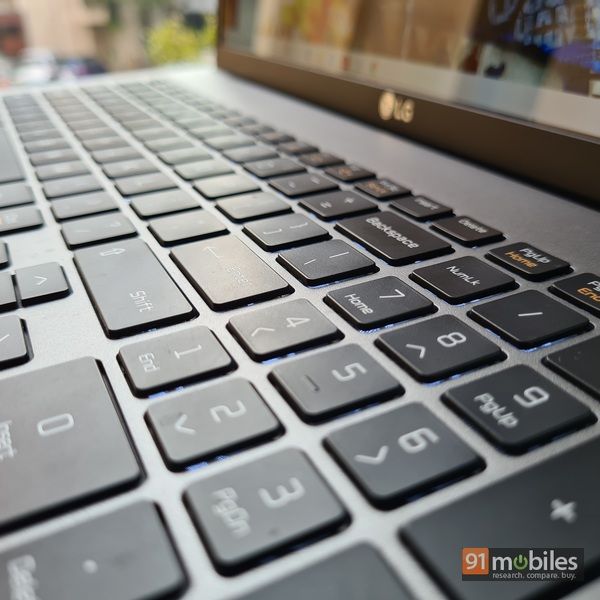 The keyboard is spaced out, includes a dedicated numpad, and has large-sized keys which translates into an easytyping experience. With any new keyboard there is a certain learning curve before your fingers naturally find the desired key. On the Gram, it was a short process partly due to the fast response and shallower travel on the keys. And yes, the keyboard does have a healthy amount of backlighting. One thing that did bug me was the sharp edge below the trackpad which kept cutting into my wrist. Apart from that, the keyboard was a joy to use and the firm chassis doesn’t flex while typing. The trackpad has a large surface area which is smooth allowing my finger to glide over. Latency response is as expected but the buttons underneath are slightly rigid. As for ports, the LG Gram has three USB 3.1 Gen 1 Type-A ports, a USB Type-C with Thunderbolt 3.0 connectivity, a 3.5mm headphone cum microphone jack, an HDMI port, and a microSD card reader. Wirelessly you can connect the LG Gram with the latest Wi-Fi 6 and Bluetooth 5.0. 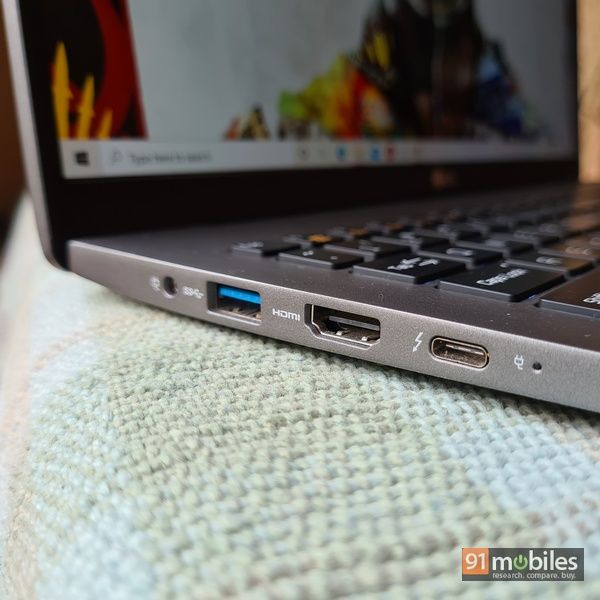 Most of the ultrabooks compromise on thermals and performance for their thin and light designs. This is more or less the case with the LG Gram as well, which uses the quad-core 10th-gen Intel i7-1065G7 CPU and integrated Intel Iris Plus graphics. With a base frequency of 1.30GHz, there is little doubt that similarly-priced Intel 10th-gen or 9th-gen H-series devices will outperform the LG Gram. However, the purpose of the Gram is to provide easy computing in an extremely light body. To that end, the laptop delivers and excels in most day-to-day jobs. I comfortably kept 20 Chrome tabs open while I was wirelessly mirroring the laptop to my smart TV and copying data on to an external flash drive. I kept switching between the different windows at random and not once did the system lag. Now obviously if you are planning to use Adobe suite of apps extensively, some amount of stutter could be expected. Also when you wake the LG Gram from sleep, any heavy tasks open at the time will pause for a few seconds before resuming. I did try to run Valorant but it is easy to see that this is not a machine meant for gaming. The thermal design will not allow sustained load for a long time. Below are a couple of benchmarks that I think should show the LG Gram as a decent workhorse. Also, the review unit I have features 512GB of fast SSD along with 8GB of RAM. A word in for the lightning-fast fingerprint sensor which is probably the fastest I have used on a laptop. None of the portability matters if the battery is not great. The LG Gram doesn’t shatter expectations in that respect, but it’s able to keep up with the competition. Standard usage puts the laptop in the 10-hour territory. More intensive tasks will be battery consuming and shorten the time to around 8 hours, which is still acceptable. The device comes with a 48W charger that will juice up the device in about 2 hours. 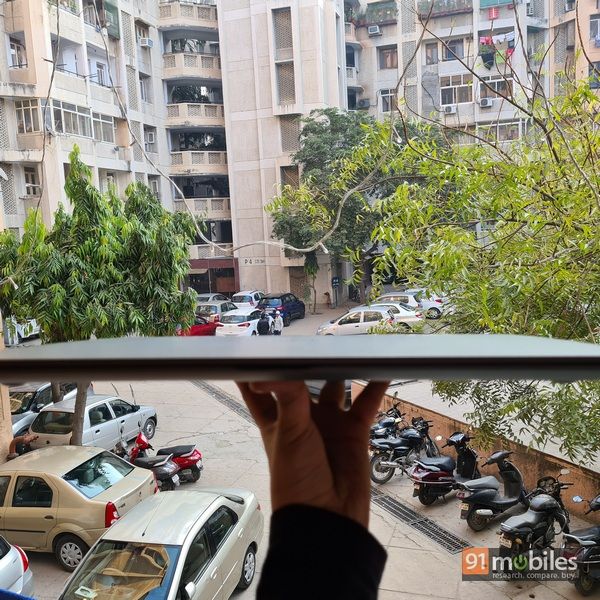 The LG Gram has been designed keeping in mind an ultralight machine that is more than capable of handling daily, moderate tasks. You will get a sizeable 17-inch panel which is quite colour accurate and offers a resolution slightly over 2K. Battery life is not impressive but is fine overall. It is just a question of whether anyone requires such a huge display in the first place. Some might be willing to trade it for better performance with some slight addition to the weight. The ASUS VivoBook 14 with Ryzen 5 is well worth a look. It is significantly cheaper, has better internals, and is not all that heavy. The LG Gram is apt for users who are sure that their need is a huge screen packed in a light body. On a side note, the LG Gram is shown as ‘Coming Soon’ on Flipkart for a Rs 99,990 price tag, which would make the laptop a substantially good deal. 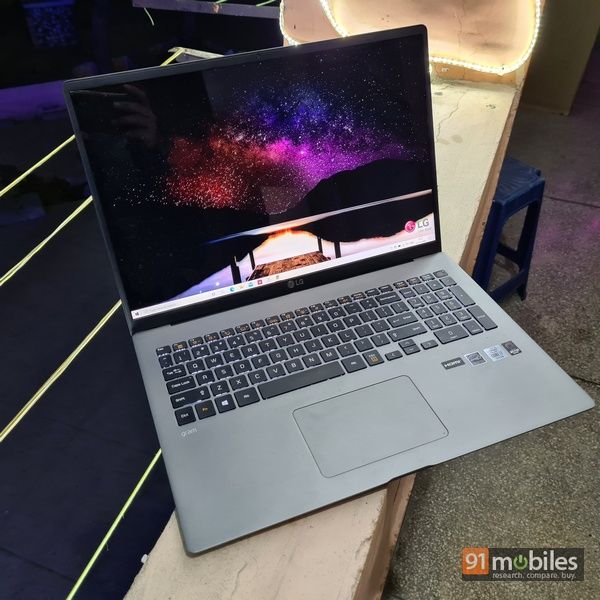