Sony’s PlayStation studios have been porting some of their top-selling games on the PlayStation 4 to PC, and the latest title to get that treatment is Marvel’s Spider-Man Remastered. The game was initially released for the PlayStation 4 in September 2018, and four years later, players who only own a PC can experience the game for the first time. However, simply providing a PC port of the same game would not be sufficient four years later, now that there is a remastered version of the game for the PlayStation 5. What makes the PC port of the remastered version compelling are the horde of customisable graphics options and peak performance that only PC players might be able to experience. Here’s how Insomniac Games’ PC version of Marvel’s Spider-Man fared in our testing.

Since Marvel’s Spider-Man Remastered is a re-release on the PC, there isn’t any new content for PC players to experience apart from a few new suits. But players who haven’t played the game or are going in blind can rest assured that it’s a brilliant superhero game. What makes this port special is that the game adds new features, so it doesn’t look dated in 2022. The latest PC version features improved shadows, raytracing, higher quality textures, better lighting, true 4K resolution and even has support for ultra-wide monitors. The PS4 and the PS5 version of Marvel’s Spider-Man already looks impressive considering the hardware it runs on, but the PC port is arguably the best way to experience the game in 2022. 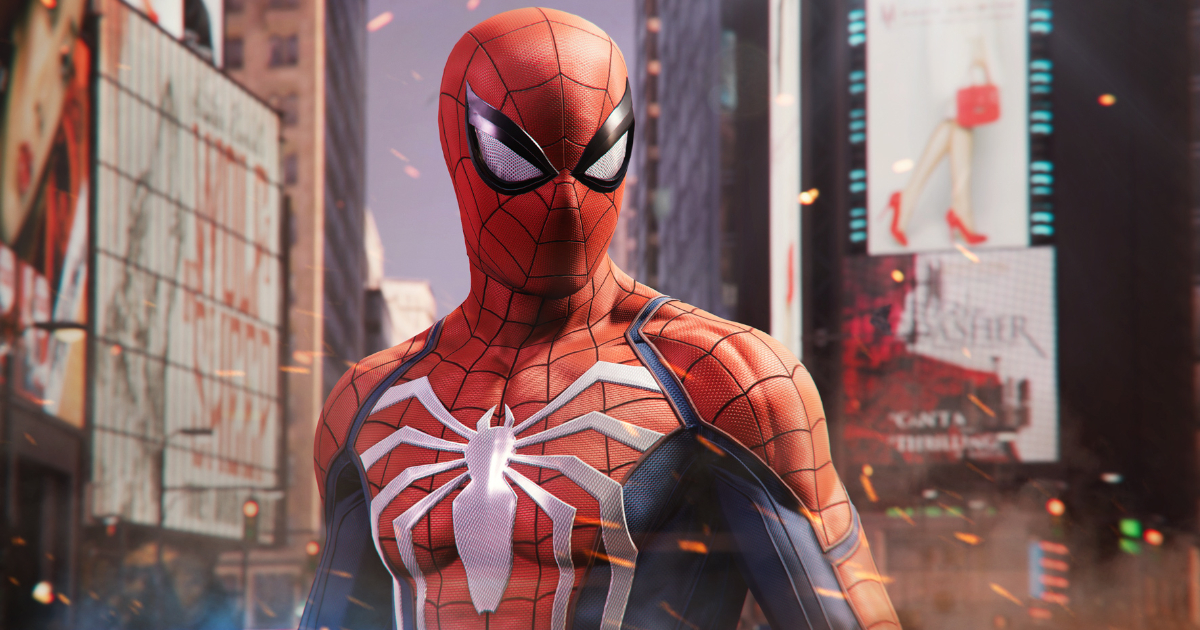 The PC port of Marvel’s Spider-Man Remastered adds an array of new customisations that players can play around with according to their rig and preferences. Features such as multiple raytracing settings, hair quality, shadow quality, texture quality and all the bells & whistles one can expect from a PC port of a game. These features are also aided with a performance boost in tandem with Nvidia’s DLSS optimisations and DLAA image quality enhancement. While the review build of Marvel’s Spider-Man was being constantly optimised, the game still ran with some impressive stats. In short, the PC version of Marvel’s Spider-Man looked crisper and more visually impressive than its console counterparts. Taking everything into consideration, the PC port is the game’s definitive version that is meant to leave players speechless.

In the real world, running Marvel’s Spider-Man Remastered on the highest of settings won’t be possible for every machine, which was the case for the PC rig this game was tested on as it did not have the latest RTX 30 series GPUs. So instead, the game was tested on a machine with a Zotac RTX 2080ti AMP Extreme core coupled with 32GB DDR4 RAM, an Intel i7-8700K CPU and a Samsung 970 EVO SSD. While this system couldn’t really deliver true 4K with very high raytracing settings, the game still performed exceptionally well at 1440p resolution. 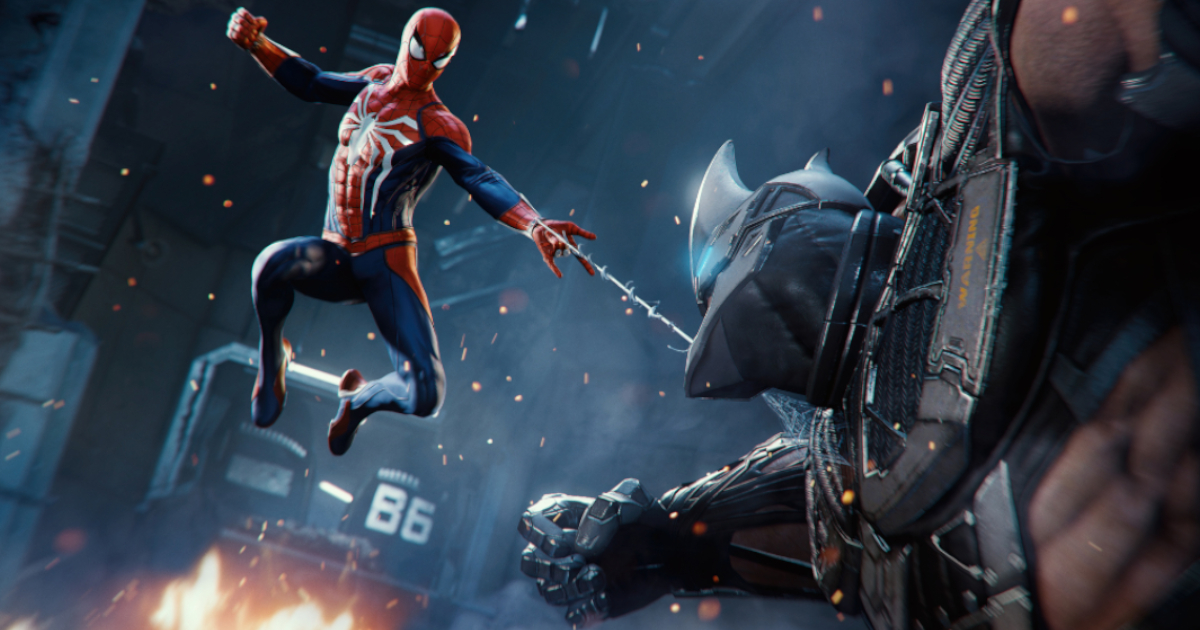 For example, when running the game with high textures and high raytracing settings, we were able to get around 80-88 FPS (depending on the situation) consistently. Similar, with very high textures, the game performed around 70-75 FPS with ease. Of course, this performance can be further improved with further tweaks in settings such as reducing Depth of Field, turning off motion blur and turning off Bloom. 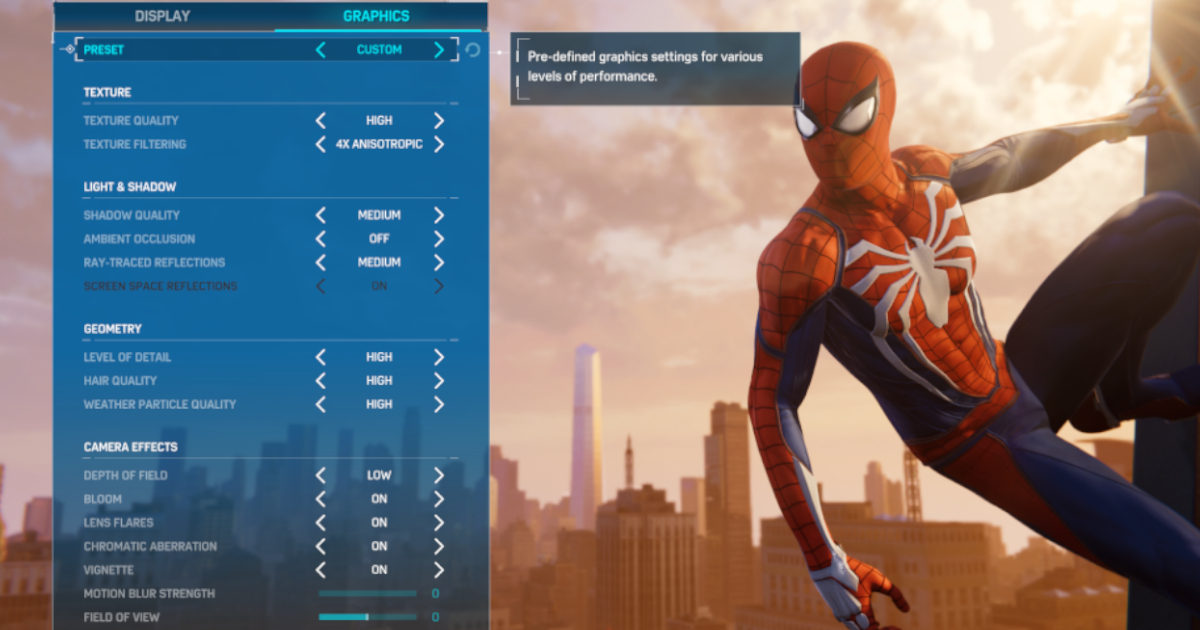 After messing around with the plethora of settings available to players, the best performance on the 2080ti with medium raytracing yielded about 120FPS to 126FPS. However, it is worth pointing out that many other settings, such as Shadow Quality, Hair Textures, and Weather Particle Quality, were set to a lower setting. If you have a rig capable of running games with 4K resolution and high raytracing settings, you will be quite satisfied, provided it has been outfitted with top-of-the-line hardware. Having said that, Insomniac Games recommends players not to use the Very High setting for Ray-traced reflections on GPUs with less than 10GB of video memory at the time of writing. While significant improvements have been made to reduce the memory improvement, by launch, Insomniac Games will be adding more options at launch and giving players more control in the raytracing department.

Marvel’s Spider-Man PC: Is It Worth Playing?

There is no doubt that Marvel’s Spider-Man on the PlayStation 4 and PlayStation 5 has already set a standard for superhero games. But if you’re looking to experience the game the best way possible, the PC port will be my recommendation. To keep things simple, the game’s PC version offers the same twenty-hour odd story with plenty of side missions to do. However, what makes this version of the game different is the performance and visual quality players will get to experience on a PC.

If you’ve already played Marvel’s Spider-Man and wanted to play the game again, the PC version warrants a second playthrough. The PC port takes the game to new heights, pushing the graphics to unprecedented levels. What’s neat is that players with a GTX 1060 can enjoy the game at 60FPS in 1080p resolution as well. Taking everything into consideration, the PC port leaves Marvel’s Spider-Man console version behind with flying colours and makes it accessible to almost every kind of PC player.