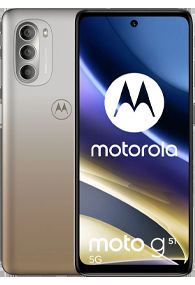 Motorola has unveiled a new smartphone in its popular G series lineup in the form of the Moto G51 5G. It is a budget-focused phone priced starting Rs 14,999, and it competes against a bunch of phones from Redmi, Realme, and POCO in the same range. The G51, on paper, sports some impressive specs such as a 120Hz FHD+ display, a 5,000mAh battery, and a clean stock Android experience. How well it comes out against its competition, is something I will discuss in this review of the device. 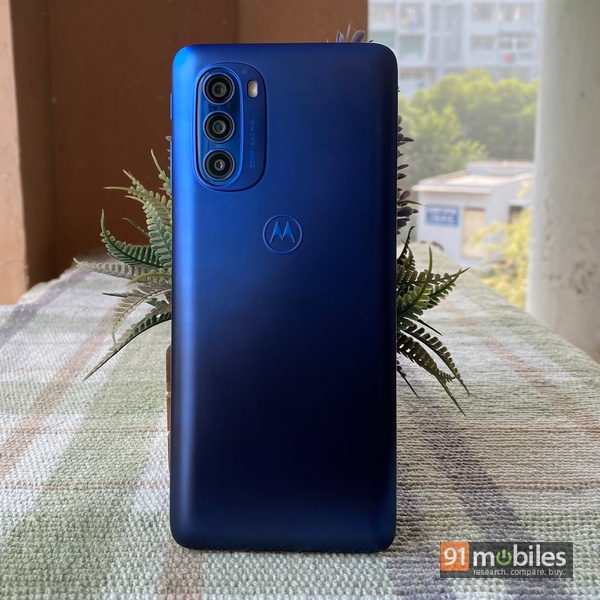 The Moto G51 doubles down on its stock Android mantra while offering a decent performance package with respectable battery life. However, it does lose a few points due to its low-light photography capabilities that need some improvement, a 120Hz display that appears to lag, and sub-par charging speeds. 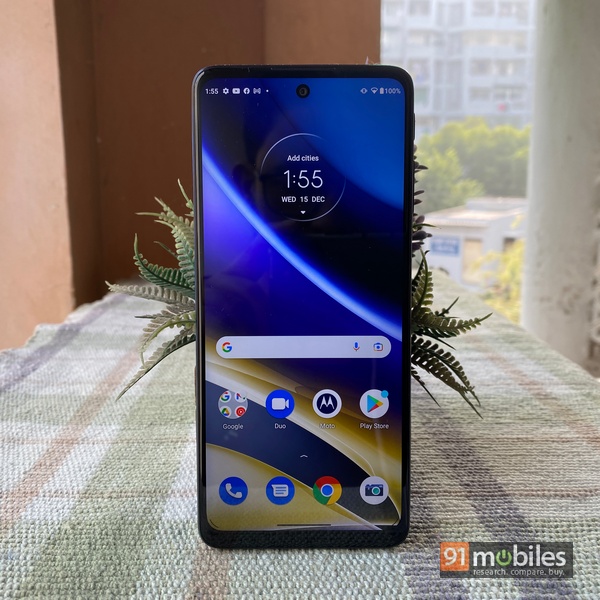 The Moto G51, like some previous Moto G series phones, is quite tall and comes with a narrow aspect ratio. However, due to its 6.8-inch screen, the phone’s utility with one hand is quite limited. The build quality of G51 conforms to the standards present in budget phones with a full unibody polycarbonate construction. I am quite partial to the matte-like finish provided on the device as it acts as a deterrent to fingerprints. Motorola’s logo is engraved in a traditional fashion near the top-centre of the phone, though this time it doesn’t double up as a fingerprint sensor. On the back, the G51 rocks a triple-camera set up in an ovular housing complete with a dual-LED flash unit. 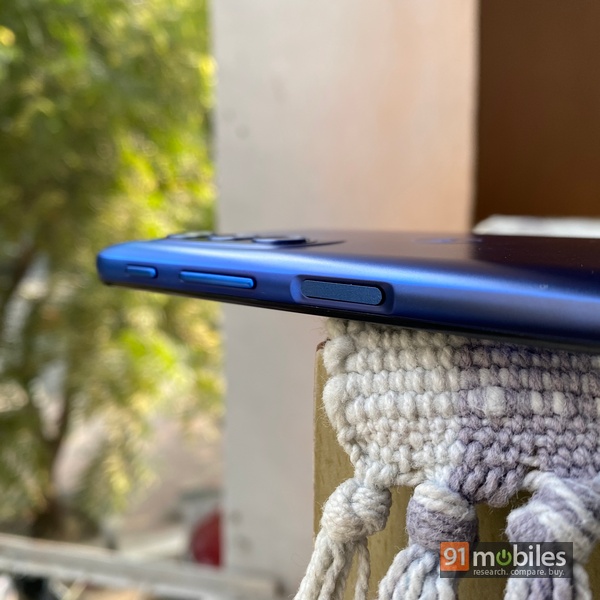 There is a dedicated Google Assitant button at the very top of the left edge but it’s not really easy to access. I do like the power button’s positioning near the centre of the edge while the volume rocker is placed quite high up too. On the bottom, there is a 3.5mm headphone jack, a USB C port, and a speaker grille. The Moto G51’s design is not as outlandish as perhaps the POCO M3 Pro (review) but its subtle looks will play well for users who are interested in the utility of a smartphone and not its flashiness. 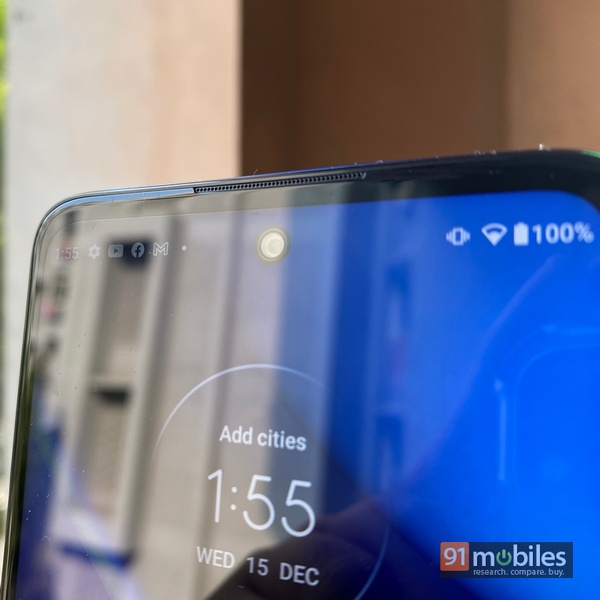 Coming to the display of the smartphone, as mentioned, the Moto G51 sports a large 6.8-inch panel of the LCD variety. It bears FHD+ resolution and 120Hz refresh rate which is certainly remarkable for the device’s price category. There are the obvious caveats that one associates with an IPS LCD display such as off-axis colour shift and a more contrasty look. While that may be true, Moto’s choice of colour calibration and saturation levels provide a pleasant visual experience. WideVine L1 certification is present, which provides for HD viewing on OTT platforms. Brightness levels on the G51 always felt quite adequate for outdoor usage and I’m quite surprised at how well the ambient light sensor works to adjust the brightness in varied lighting conditions. However, the 120Hz refresh rate can appear slightly jittery and erratic at times. There have been a few occasions during my review period, where I had to restart the phone so that the screen can revive its fluidity. 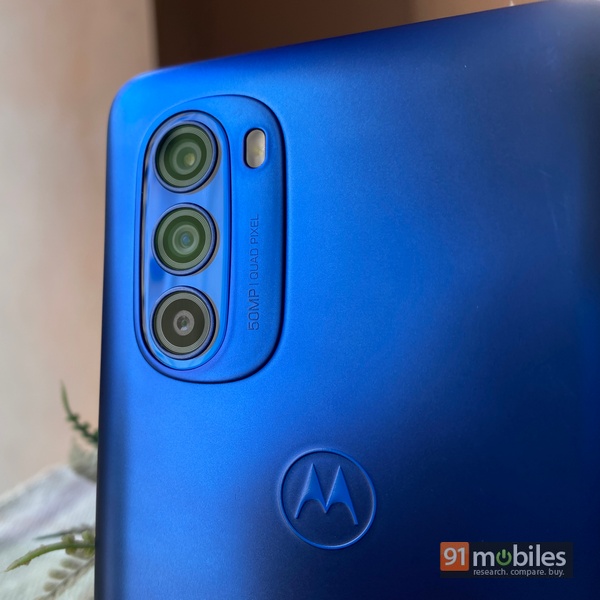 On the optics side of things, the phone has a 50MP OmniVision sensor which is paired with an 8MP ultra-wide shooter that also has depth capabilities, and a 2MP macro vision camera. Modern smartphones, in almost all price segments, have acquired an adequate understanding of colour science in brightly lit scenarios. In the case of the Moto G51, the primary shooter gets you crisp images with average dynamic range but very good colour reproduction. Detailing is quite sharp across the frame and I am happy with how well the exposure is handled in the darker areas of the shots. However, during the night, the primary camera introduces too much light and gives the images a rather artificial look. There is also a lot of noise being generated in the night sky. I think there is scope for improvement in the Moto G51’s low-light photo capabilities. Detailing remains largely absent and the colours are rather skewed. On the other hand, the ultra-wide shooter is much more adept at getting a larger field of view while keeping the elements of the scene in place. The colour temperatures match up with the primary lens and the warping along the edges is quite minimal. As for the macro sensor, its ability to shoot with reasonably good detail is very much up for debate. The selfie camera on the front maintains skin tones and facial features. The Qualcomm Snapdragon 480+ chipset being used on the device might impart a wrong impression about the phone’s real-life performance. Some believe that the 400 series of chipsets are reserved for the lower echelons of the smartphone world. However, the 480+ can be easily be put in the same category as a Snapdragon 720G or even a 732G. Long story short, the Moto G51 keeps up with all its competitors in terms of raw performance and graphical use. Moreover, it can sustain this performance for a longer time as well. The phone rarely ever overheated or buckled under lengthy BGMI sessions. However, I do believe the 4GB RAM for the base variant is too low. The 64GB internal storage can be expanded, but it comes at the cost of sacrificing one of the dual-SIM slots. Speaking of which, the phone does have 5G support and it actually supports a lot more bands than most competitors. However, the advent of 5G is still some time away for the country. 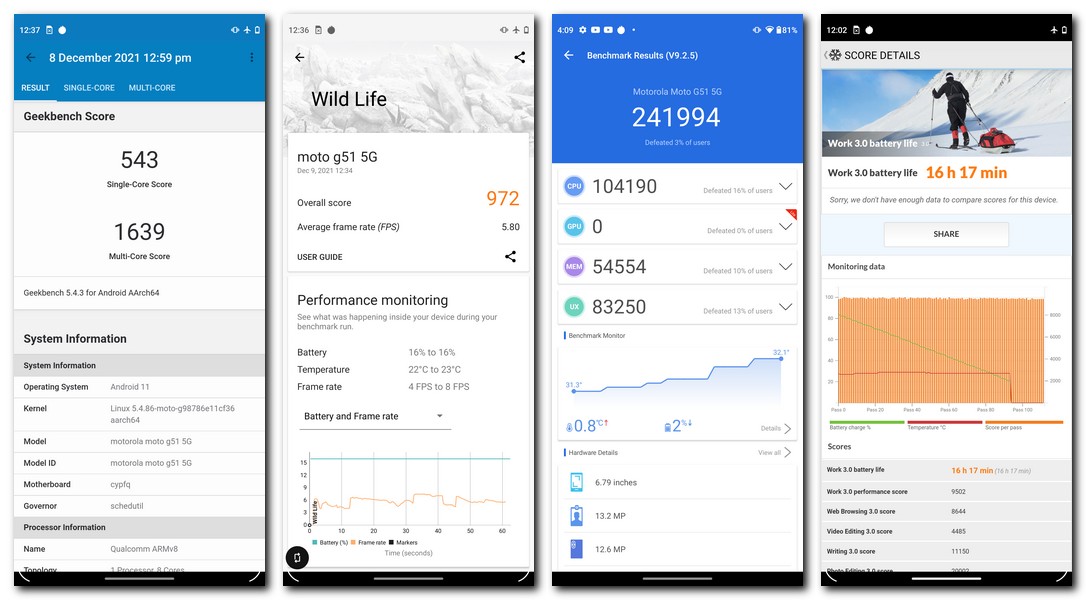 Talking about some of the phone’s other features, the fingerprint sensor is very snappy, while the face detection is average at best. The single bottom-firing speaker is rather tinny sounding and lacks depth in terms of the audio experience. There are several phones in the same price range now that support good stereo output. However, the G51 does boast of Dolby Atmos support which doesn’t make a lot of difference on the loudspeaker but does fine-tune the experience through a pair of wired/wireless earphones. Motorola’s stock Android implementation is always a pleasure to use and I’m a fan of the nearly zero bloatware policy by the company. In addition to that Motorola is guaranteeing at least three years worth of software updates on the device which includes an upgrade to Android 12. 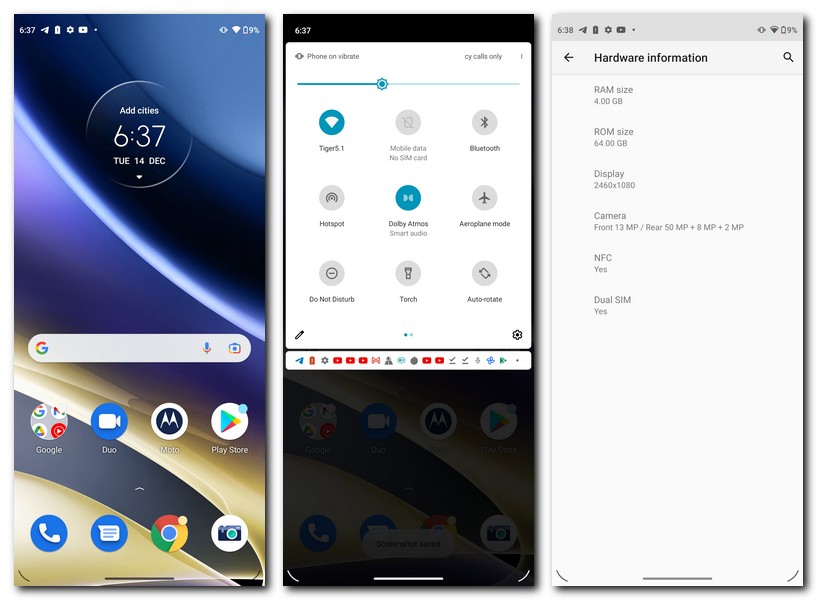 Motorola has provided a 5,000mAh cell on the G51 which I believe has become quite standard on affordable phones nowadays. My experience with Moto’s device entailed a lot of YouTube and Facebook usage. I managed a very easy 6 hours of screen-on time which is more than decent for a 5,000mAh cell. However, I was disappointed with just a 20W charger being provided as it took more than 2 hours to completely juice up the phone. 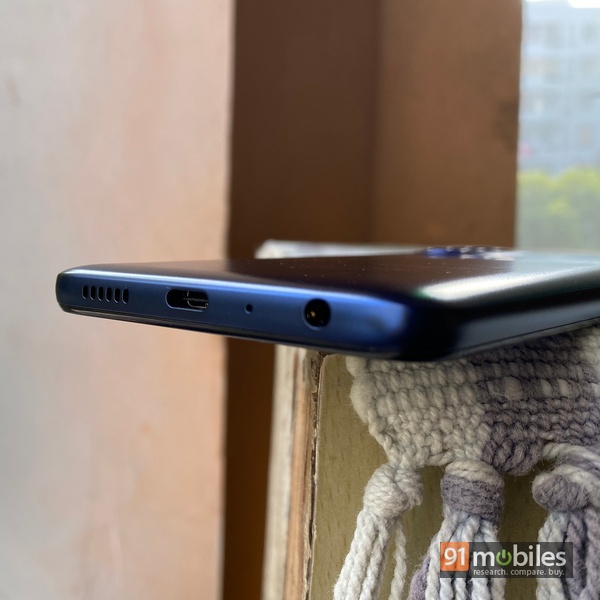 There are question marks about the phone’s low-light camera performance, the stuttering 120Hz screen, along with slow charging speeds. However, I believe that the Moto G51 is definitely a phone worthy of consideration. It offers a clean software experience that isn’t bogged down by unnecessary bloatware and themes, and Motorola has a good history of sending updates on its Moto G series phones regularly as well. The Qualcomm Snapdragon 480+ chipset appears to offer a competitive level of performance and the battery life is excellent. In the overall scheme of things, the Moto G51 appears as a new and reasonably compelling choice in the affordable segment. 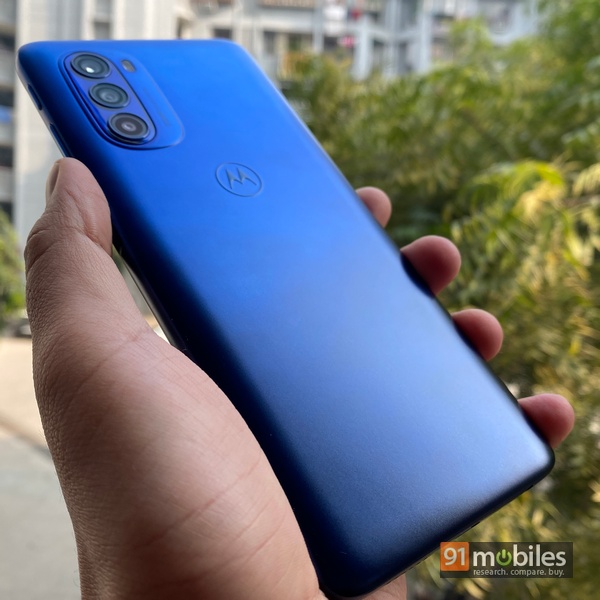