After establishing a compelling mid-range portfolio in 2020, POCO is back to its disruptive roots in 2021. Case in point, the POCO X3 Pro (review) which launched a while ago and is, in my books, the fastest performing handset south of Rs 25K. Building on the momentum, the company now hopes to wow the audience with a capable 5G phone that doesn’t break the bank. To that note, the brand recently took the wraps off the POCO M3 Pro 5G which promises to deliver rapid download and upload speeds as and when the latest networks are deployed in the country. But, is there more to the phone than just its 5G capabilities? Read on to find out.

The POCO M3 Pro 5G gets some things right, offering reliable performance and a good-looking design. What’s more, the smartphone is among the most affordable handsets that are 5G enabled. However, the device’s camera performance leaves something to be desired.

It’s no secret that POCO often incorporates inspiration from Redmi’s Note range in the design of its products. The POCO M2 Pro (review), for instance, was a rebranded Redmi Note 9 Pro with slightly tweaked specs. The same goes for the company’s latest handset, which looks eerily similar to the Redmi Note 10 series of phones launched in China. Thankfully, POCO has fine-tuned the aesthetics of the phone to a point where the M3 Pro 5G looks fairly distinctive. On that note, the POCO M3 Pro features a two-toned finish towards the back and offers three colours, including Power Black, POCO Yellow, and Cool Blue. 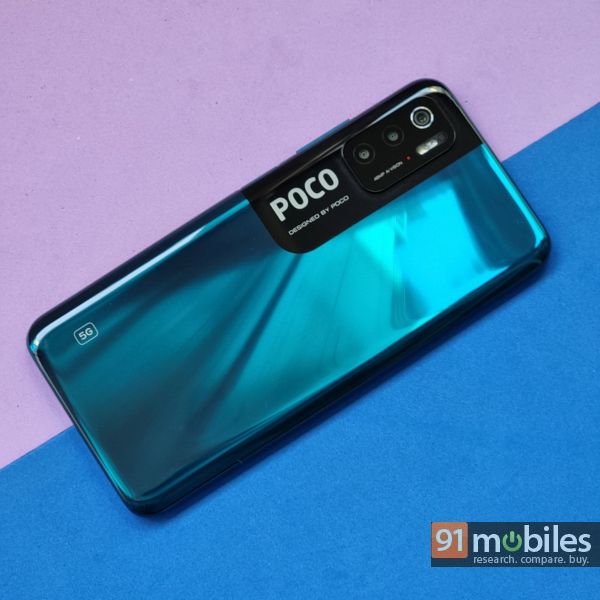 All three shades gel well with the secondary black hue which envelopes the smartphone’s camera module and houses the company’s branding too. The mix and match between the colours jazzes up the phone’s aesthetics quite a bit, and I wouldn’t be surprised if you wanted to flaunt your POCO M3 Pro 5G – the phone undoubtedly cuts a handsome package, and the bright Blue and Yellow hues don’t appear gaudy either. If anything, I would’ve liked to see the phone sport a matte finish towards the back because as things stand, my review unit of the POCO M3 Pro 5G smudges quite easily. Regardless, buyers opting for the phone shouldn’t have many complaints with the design on offer here. 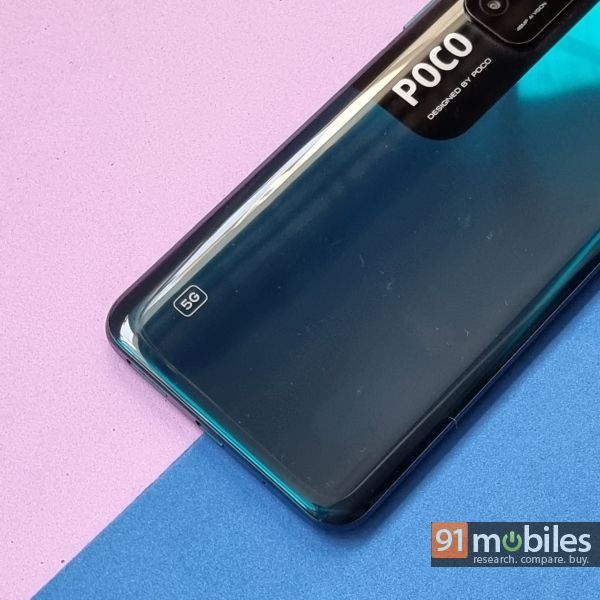 We use our phones day in and day out, necessitating an ergonomic build. Thankfully, the M3 Pro 5G doesn’t disappoint here either. While the handset is a bit heavy at 190g, the smartphone’s curvy back and chamfered frame lend the device a comfortable in-hand grip. What’s more, the device’s side-mounted capacitive fingerprint sensor has been positioned towards the middle of the frame, making it that much easier to reach and use. The performance of the sensor was to my liking as well, and the handset’s facial unlock tech didn’t disappoint me either. 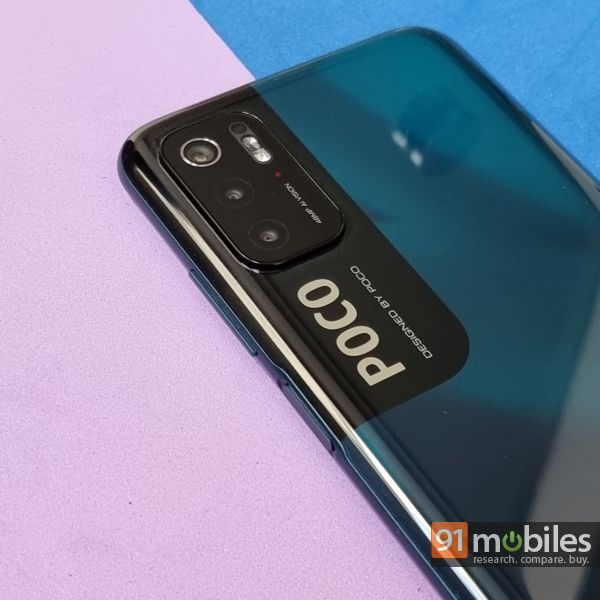 Much like most other mid-range phones, the M3 Pro 5G doesn’t feature any IP rating. However, you do get a layer of Corning’s Gorilla Glass v3 on the front, which should prevent the screen from getting scuffed to a certain degree. Furthermore, seeing how the phone has been primarily constructed out of polycarbonate, it should come out unscathed if you drop it too.

It’s tricky to strike the delicate balance between the display technologies and refresh rate, especially in the affordable segment. While some would prefer a 60Hz AMOLED screen, others might be willing to trade in the AMOLED goodness for an LCD panel with a 90Hz or 120Hz refresh rate, if it comes to a tradeoff between the two. In the case of the POCO M3 Pro, the company has decided to furnish the smartphone with a 90Hz LCD screen, which will surely upset some prospective buyers. That said, the panel on the phone isn’t all that bad and offers a satisfying viewing experience. 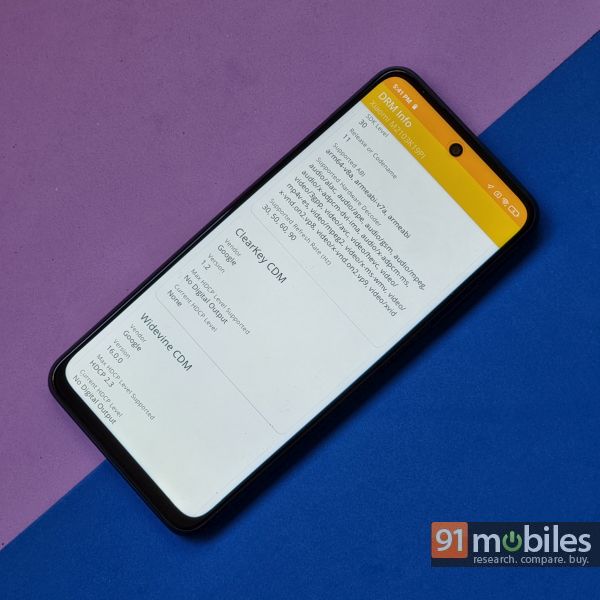 You’ll not only be greeted to wide viewing angles but the handset can, in fact, stream content in HD from OTT services like Netflix as well. The punch-hole notch positioned dead in the centre doesn’t exhibit any backlit spillage either, and the panel’s touch response rate of 180Hz was to my liking as well. Of course, the 90Hz refresh rate paves way for smooth visuals too, and be it scrolling through my social media apps, or navigating through the phone’s UI, the POCO M3 Pro 5G seldom gave me an impression that I was using a sub Rs 15K phone. 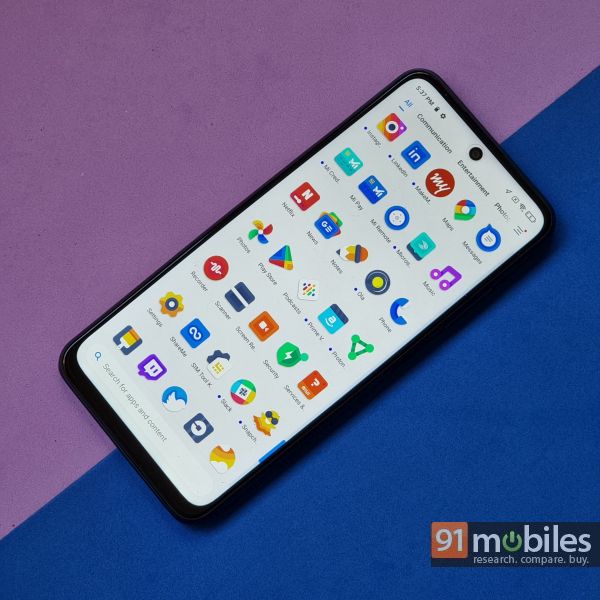 Unfortunately, the screen’s 400nits peak brightness leaves a little to be desired and I found myself squinting my eyes to read the content on the display when I was out and about. What’s more, unlike some competing handsets, the POCO M3 Pro 5G cannot relay content in HDR either. Add to that the phone’s single bottom-firing speaker and movie buffs might be a little disappointed with the POCO M3 Pro 5G.

On to the smartphone’s imaging prowess and here, the POCO M3 Pro 5G features a rather substandard triple camera setup at the back comprising a 48MP main sensor which works alongside a 2MP macro shooter and a 2MP depth sensor. For selfies, the handset gets an 8MP shooter up front. I’ve summed up my experience with the phone’s camera setup below.

The POCO M3 Pro 5G is the latest handset to employ MediaTek’s Dimensity 700 SoC. The chipset makes use of a Mali-G57 MC2 GPU and works alongside either 4GB or 6GB of LPDDR4X memory. Correspondingly, you’ll get either 64GB or 128GB of built-in, user-expandable UFS 2.2 storage. So, how does the phone perform? Well, I have some good news, and some bad news. Let’s start with the good news first and here, the M3 Pro 5G outputs stellar scores in benchmarking apps like Antutu, GeekBench, and AndroBench. 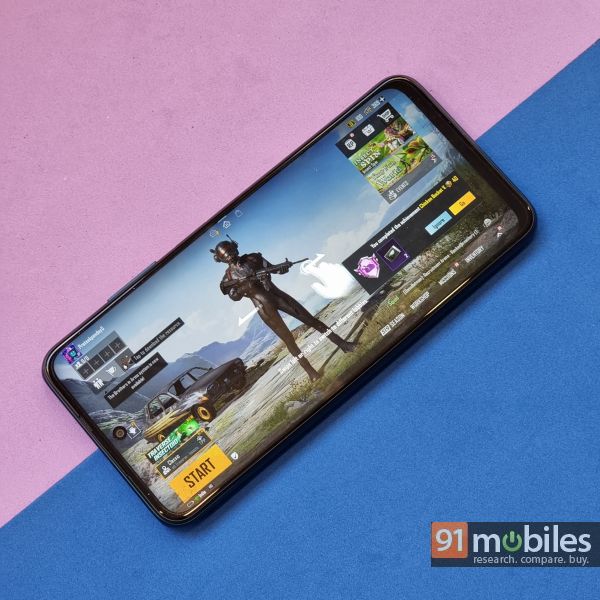 What’s more, I was quite satisfied with the phone’s day-to-day performance too, and I rarely ran into any instances of lag or stutter whilst using the phone as my daily driver. Multitasking was fluid too, and app load times were cut down thanks to the phone’s speedy storage. In a nutshell, despite its modest price tag, the POCO M3 Pro 5G feels quite responsive, more so than, say, the Redmi Note 10S I reviewed a while ago.

That said, the device’s gaming performance could’ve been better. While I didn’t run into any major performance hiccups whilst running graphically intensive titles on the phone, the handset’s GPU is quite limiting and it struggled to push the graphics beyond the medium preset in Call of Duty Mobile, and HD in Battlegrounds. Moreover, I noticed that the smartphone did drop frames every once in a while, especially if I was gaming for extended periods on the phone. The same was evident when I ran the CPU Throttle test on the phone wherein, the device throttled to 80 percent of its peak performance over a period of 30 minutes. Thankfully, the M3 Pro 5G handles thermals quite well and I didn’t notice the device heat up even after 45 minutes of gaming, which is great.

As for the software, the POCO M3 Pro 5G ships with MIUI v12 on top of Android 11. Now, despite being a POCO-branded phone, the M3 Pro 5G comes bundled with Xiaomi’s GetApps utility which will send unnecessary notifications your way. You also get a slew of other apps from Xiaomi’s suite, including Mi Pay, Mi Credit, and the works. Thankfully, you can uninstall most, if not all of the clutter from the M3 Pro 5G and even disable or limit system apps from littering your notifications tray. Of course, you also lots of other utilities with the custom skin, including a built-in dark mode, an app locker, a feature-rich theme store, and much more. 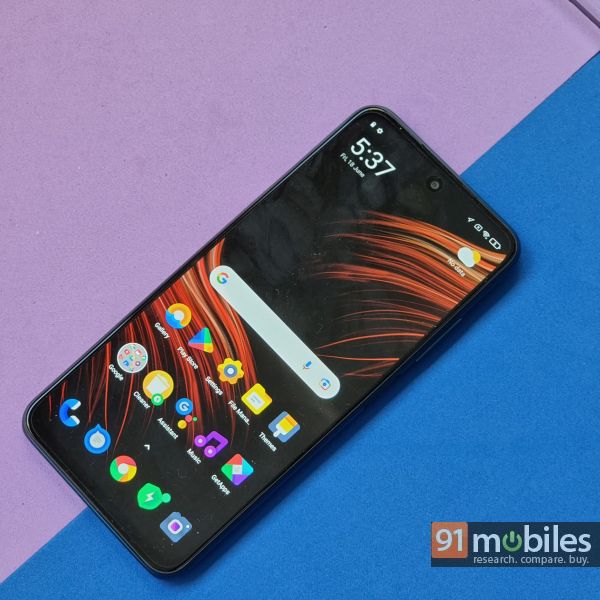 However, the standout feature in my books that sets the M3 Pro 5G apart from other devices under Xiaomi’s umbrella is that the device allows buyers to use third-party icon packs as well. Consequently, you won’t have to install a custom launcher on the phone, which by the way, limits gesture-based navigation on devices running MIUI v12. On the whole, the POCO M3 Pro 5G brings much-needed refinements to MIUI and consequently, offers a satisfying software experience.

The POCO M3 Pro 5G ships with a 5,000mAh battery which saw me through the end of a heavy work day easily. What’s more, much like the similarly-specced Realme 8 5G, the device also ships with an 18W fast-charging brick which charges the phone completely in a little under 1.5 hours. 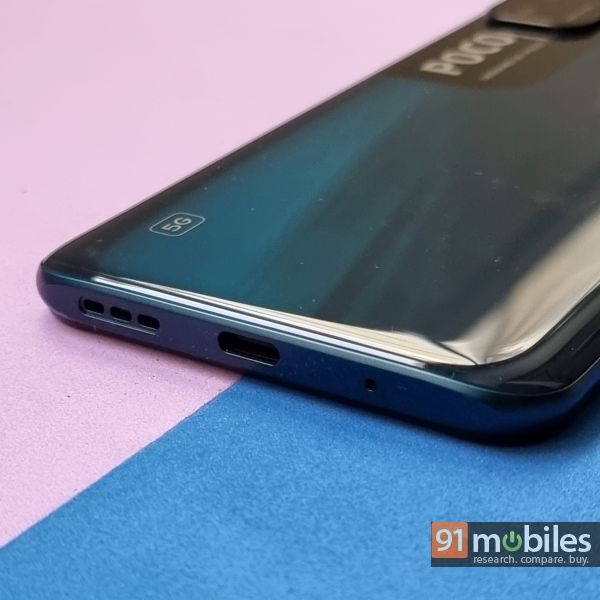 Connectivity-wise, the handset offers support for a handful of sub-6GHz 5G bands including n77 & n78, which is great. Furthermore, I didn’t run into any networking issues on my Airtel Postpaid SIM with the phone, and the device supports both, 2.4GHz and 5GHz Wi-Fi bands as well. I’d also like to add that the M3 Pro 5G’s earpiece relayed the voice of callers over to my ears clearly, so if you’re the type to make a lot of phone calls, the smartphone will not let you down.

The POCO M3 Pro 5G retails for Rs 13,999 for the 4GB RAM variant, and those eyeing the 6GB RAM variant will have to set aside Rs 16K for the phone. Now, the M3 Pro 5G has a couple of things going for it and in my testing, I found the device’s performance to be superior to similarly-priced handsets, such as the Redmi Note 10S. What’s more, the handset is 5G-ready and features a good-looking design as well. That being said, the smartphone’s camera performance isn’t the best and the device’s LCD screen might sway prospective buyers over to the competition’s doorsteps.

Of course, the sub Rs 15K segment is all about making the right compromises, so if you find yourself second-guessing the M3 Pro 5G’s purchase, ask yourself how important is it for you to futureproof your purchase with 5G chops. If you don’t mind opting for a 4G phone, then you should also keep an eye out for the upcoming Samsung Galaxy M32, which on paper, features a better display and a mightier camera setup. All things considered, the POCO M3 Pro 5G is an enticing option in the sub Rs 15K segment, but one that’s not void of competition.