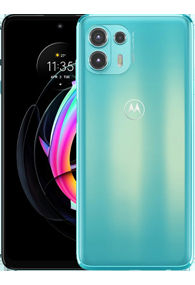 Motorola recently announced its new lineup of mid-range smartphones in the form of the Motorola Edge 20 and Edge 20 Fusion. For those keeping track of the Lenovo-owned smartphone giant which was once one of the most dominant brands in the Indian space, the Edge series was introduced as Motorola’s flagship lineup last year. Now, Motorola is trying a new price bracket of sub-Rs 30,000 for the Edge 20 series to increase its user base. I have my hands on the new Edge 20 Fusion which starts at Rs 21,499, with its biggest highlight being the massive 108MP sensor it harbours on the back. With several smartphones already crowding the mid-range market, let’s take a look at how good the Moto Edge 20 Fusion’s claim to the top spot is in this detailed review. 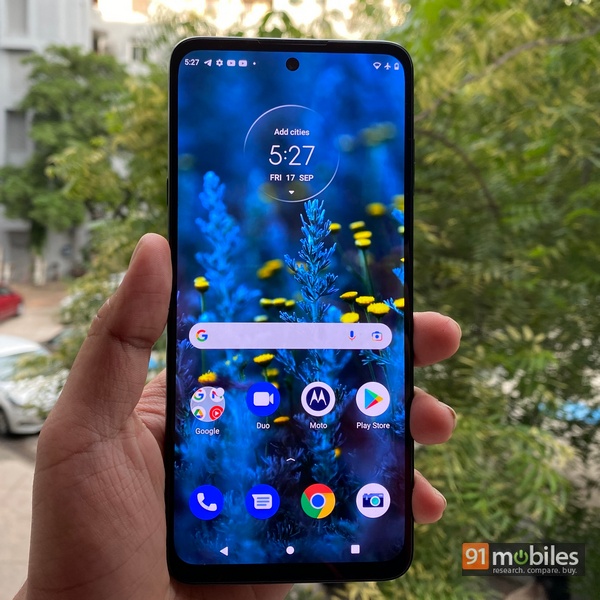 The Moto Edge 20 Fusion is a capable phone in nearly all regards, be it the cameras, display or performance. The device can handle almost anything thrown at it with the kind of grace that can be expected from a mid-range offering. My concerns lie only with the phone’s handling of low-light photography and the absence of dual speakers. 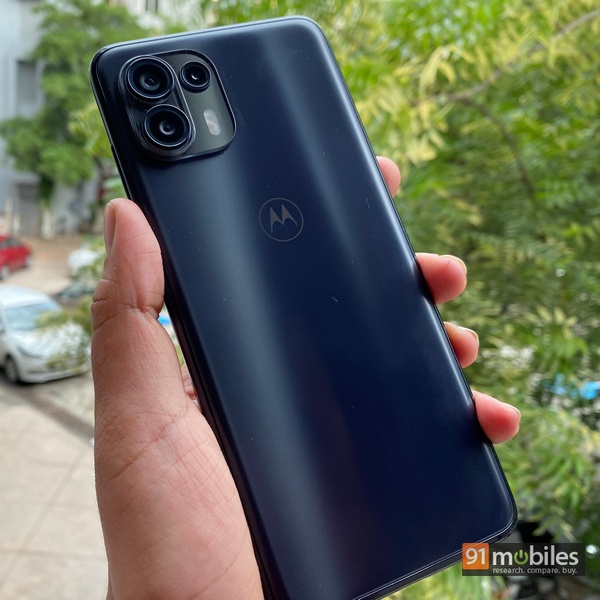 The Moto Edge 20 Fusion makes use of a plastic unibody design with a standard curved back and reasonably thin chassis. There is some weight to the device owing to its rather large size, but the narrow aspect ratio compensates for the in-hand feel. The back has a matte-like finish to it which surprisingly does very little to impede smudges and fingerprint marks. In trademark Motorola fashion, there is a dedicated Google Assistant button, but its placement at the very top on the left edge makes it hard to reach. Thankfully the fingerprint scanner hasn’t been built into the Motorola logo at the back this time, and instead, you get one in a much more reasonable position on the side integrated with the power button. The 3.5mm headphone jack, speaker grille, and USB C port can be found at the bottom. Called Electric Graphite, this particular variant that sports a slight purple-ish hue over the matte finish does give a very nuanced look to the phone’s back which I appreciate. An iPhone 11-esque square camera bump surrounds three lenses, of which two protrude out quite prominently. The device is also IP52 certified which protects it from light splashes but is definitely not meant for submerging in water. 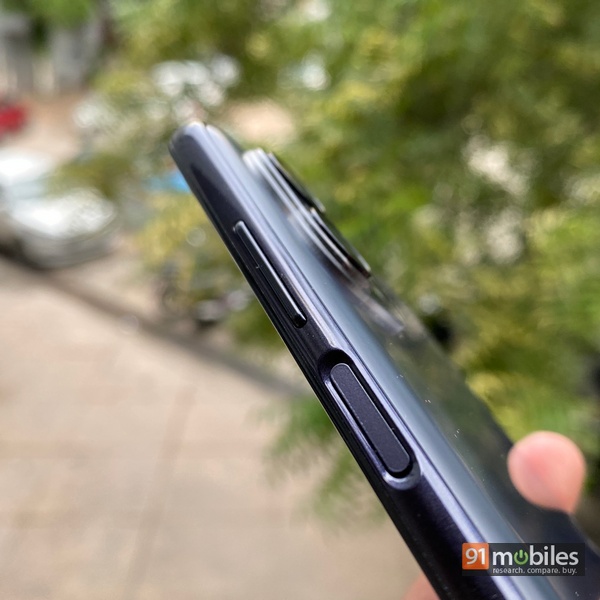 Coming to the display, Motorola has included a 90Hz AMOLED panel which measures about 6.7-inches diagonally and has a punch-hole for the selfie shooter. The original Edge was criticised for its rather extreme curves on the display’s edges, so this time Motorola has gone with a flat design on the front. Being an AMOLED panel, the contrast ratios and viewing angles were top-notch, as expected. The 90Hz refresh rate also lent a touch of fluidity to the interface and was very responsive. Brightness levels were not the best since I had a bit of trouble reading under sunny conditions and the adaptive brightness sensors seemed a bit iffy. The display profile is customisable in terms of changing the colour temperature and there’s a very handy feature called Attentative display that tracks your eye movements so that the screen doesn’t go dim when you’re looking at it. HDR10 support is supported and helps provide a visually appealing experience on OTT platforms. Apart from that, there are the usual toggles for enabling dark mode and adjusting the refresh rate. 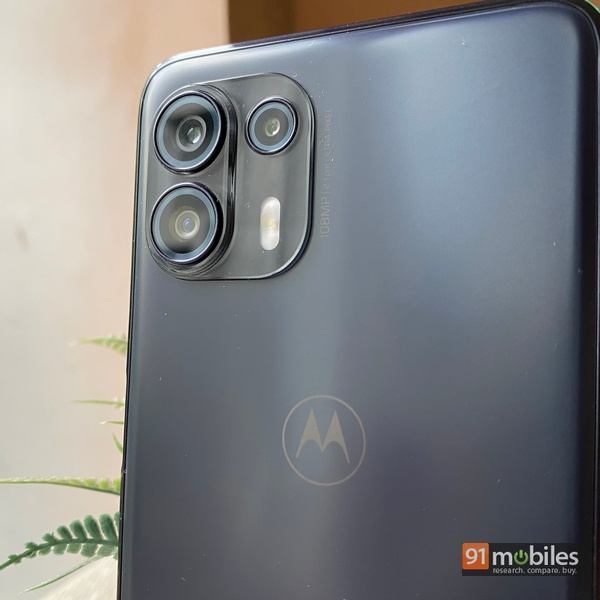 In the camera department, the Moto Edge 20 Fusion makes use of a 108MP sensor which happens to be identical to the one used in the Redmi Note 10 Pro Max (review). There is also an 8MP ultra-wide shooter which can double up as a macro camera as well for subjects up to 4cm. The 2MP depth sensor completes the triple-camera ensemble on the back while on the front you get a 32MP selfie shooter. My impressions of the cameras on the Moto Edge 20 Fusion are largely positive. The large 1/1.5″ sensor allows for a significant amount of detailing and exposure to seep into shots while blending it with a natural bokeh owing to the sensor’s shallow depth of field. Resolution-wise Motorola recommends using the 12MP pixel-binned shots with Ultra Pixel technology which provides a healthier dynamic range. There is also a quad-pixel 32MP mode that has a more contrasty appeal to it and the High-resolution 108MP mode for scourging more details in the same shot. Shutter speeds are slightly slow as is the autofocus, but overall the images look sharp and have a balanced colour tone. The ultra-wide sensor’s warping at the edges is very minimal and the colour temperatures are quite in line with the primary shooter. Focus generally is sharp across the plane with minimal oversharpening of details. The macro capabilities are similar and I appreciate Moto’s efforts to not camera pad the phone and integrate it within the ultra-wide sensor. In low light, the primary shooter does like to bring up the noise to get in more exposure but the images have a slightly soft focus overall. Shadows and highlights feature less prominently than when you have the dedicated Night mode turned on. Overall there is scope for improvement in the low-light photography department which can possibly be remedied through future software updates. The 32MP selfie shooter is nothing exceptional but it gets a good amount of facial details accurately. 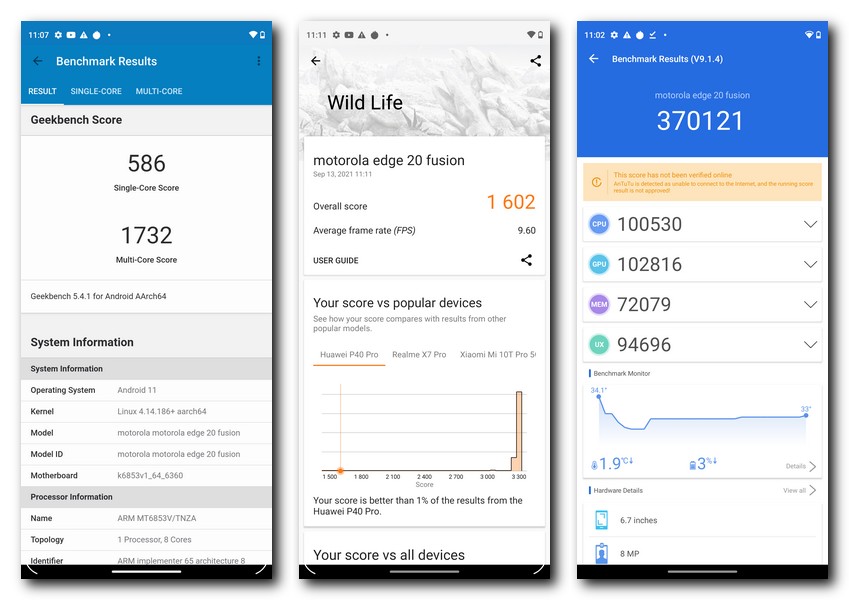 The processing on the Moto Edge 20 Fusion is handled by the Dimensity 800u 5G chipset and I have some details on its relative performance here. Basically it boils down to the fact that getting through moderate to easy tasks on your phone will never be a problem. The Edge 20 Fusion didn’t show any lag during my usage and I really put the device through its paces. Motorola’s bare-bones, stripped-down skin running over Android is basically the closest you will get to stock Android, which prevents the processor from getting too overwhelmed. With benchmark numbers such as the overall score of 370,121 on Antutu as testimony, I can say that performance will not be an issue on the Moto Edge 20 Fusion. Of course, if you are looking for better GPU capabilities, the POCO X3 Pro (review) running the Snapdragon 860 could better serve your purposes. I’m not saying that the Moto Edge 20 Fusion is not adept at heavy graphical tasks, but you do have the option to run the demanding BGMI at Extreme frame rate option of 60fps on the X3 Pro as compared to the Ultra 45 fps on the Edge 20 Fusion. 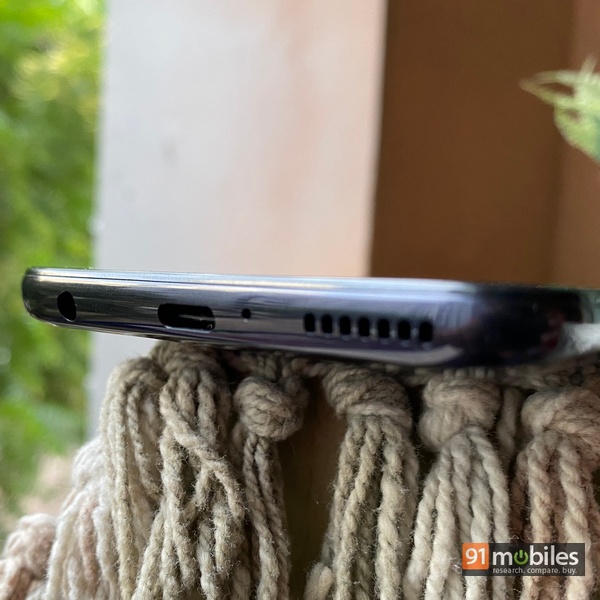 You get 6GB of LPDDR4 RAM in the base version of the device and it can go up to 8GB while storage remains non-expandable at 128GB. The lack of stereo speakers does trouble me as their inclusion has become quite standard on mid-range devices. Haptic feedback on the phone isn’t great, and Motorola can do well to take cues from Redmi in this regard. 5G is present on the device, but since there is no current 5G infrastructure in India to test it out, my opinion on the technology is of limited value. Let’s hope that changes by the end of this year. I faced no issues with the phone’s 4G LTE service on Noida’s Jio network while the earpiece and microphone worked as advertised. The fingerprint sensor wasn’t the snappiest but it got the job done without repeated attempts required. As mentioned before the MyUX skin running on the device is very light and free of bloatware while Motorola has sprinkled in a few user-friendly customisations as well. The company is generally very reliable with software updates so you should see the upgrade to Android 12 pretty soon. 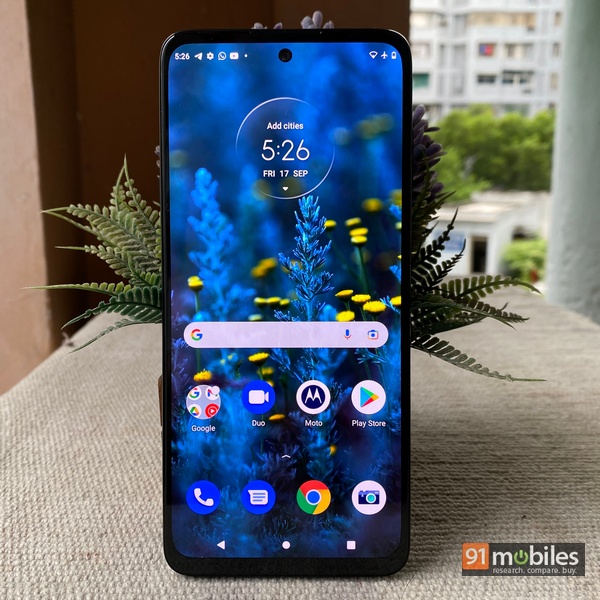 The Motorola Edge 20 Fusion packs in a 5,000mAh cell under the hood which is pretty much a standard-issue these days. I looped a 720p movie at half brightness and volume and the phone ran out after playing it back for nearly 28 hours, which is quite good. In terms of real-time usage, the phone didn’t die out on me during the day even with extensive YouTube and BGMI I threw at it and the screen-on time being about six hours. Motorola claims up to 2 days of battery backup but in my opinion, your usage would have to be very light to achieve that. In any case, the Moto Edge 20 Fusion comes with 30W fast charging that juices up the phone in a little over an hour. 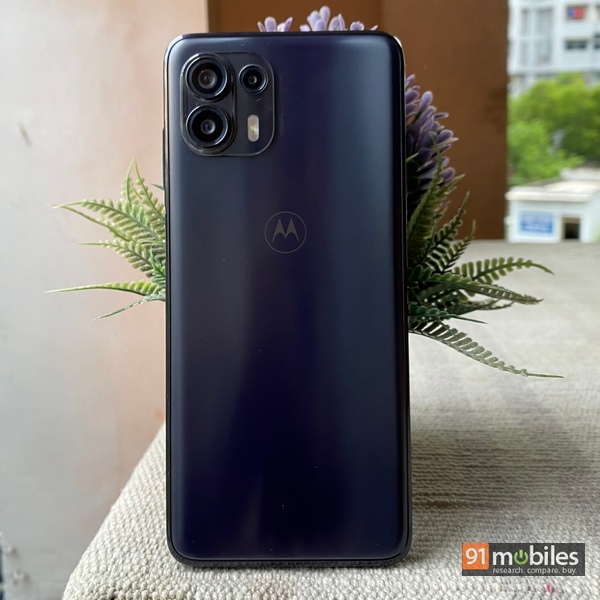 Does the Motorola Edge 20 Fusion have the oomph factor to edge out the competition? I am of the opinion that the device does make an impressive statement with the specs on board. It certainly bodes well for Motorola as a value-for-money proposition. There is no denying that the Edge 20 Fusion has a reasonably good design, a decent AMOLED display, cameras that speak for themselves in daylight, decent performance, clean software, and a lasting battery. Could improvements have been made for better low-light shooting? Definitely. Is the lack of stereo speakers an issue? I think so. Can the screen be brighter? I would’ve liked it. These are minor roadblocks over an otherwise impressive mid-range attempt by Motorola and I’ve no problem in recommending the device to users who would like a clean software experience while not compromising on vital aspects of a smartphone experience.