The ongoing pandemic has undoubtedly bolstered the sales of fitness trackers in the country. That said, amidst a sea of offerings, Noise has managed to create a convincing portfolio of value-oriented trackers that don’t just look good, but perform well too. Recently, the company introduced a wallet-friendly fitness watch in the market in the form of the Noise ColorFit Caliber. I managed to get my hands on a unit and here’s what I make of it.

Noise has an exhaustive portfolio of affordable trackers and over the years, the company has honed its expertise to design stylish and trendy products. Take the Colorfit Caliber, for instance, which is up for grabs in a variety of stylish colours, including the sea green hue sent to me for review. Consequently, despite donning the appearance of a conventional fitness tracker, the Colorfit Caliber manages to stand out from the herd of other affordable wearables in the market. 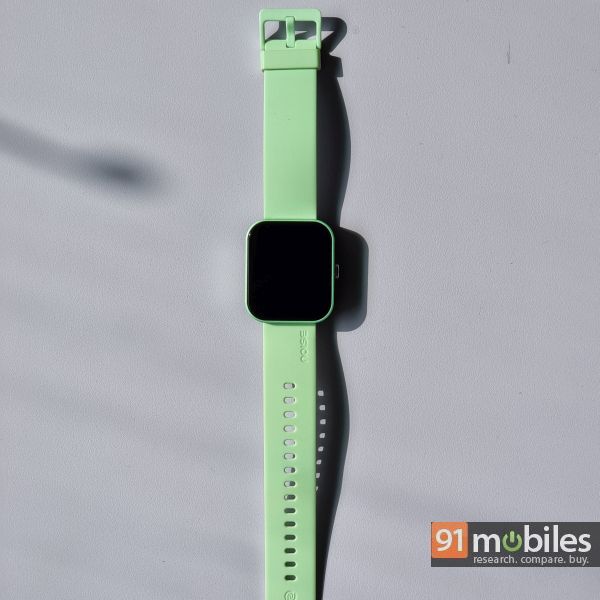 Peppy colours aside, the company has spruced up the wearable’s design to give it more character too. The rubberised strap, for instance, features a subtle ‘Noise’ logo. Moreover, the wearable’s frame, albeit plastic, matches the colour of the straps and consequently, maintains uniformity with the unit’s design ethos. Speaking of which, the straps feature quick-release pins too, thereby allowing users to change the wearable’s looks on the fly. That’s not all, as the watch is extremely comfortable to wear day in and day out and tips the scales at just 37 grams. 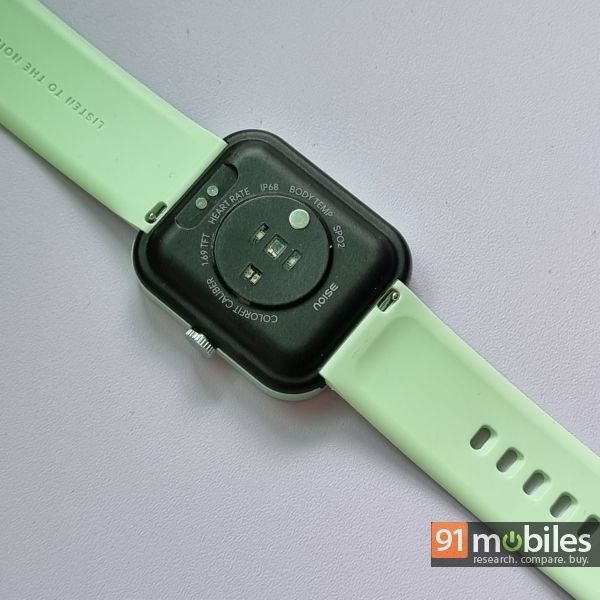 With that said, I ended up pressing the wearable’s physical crown accidentally on more than one occasion. Now, if you find yourself in a similar pickle, then I’d advise you to strap the device an inch above your wrist. In doing so, you won’t serendipitously trigger a command when your wrist is at an angle, say when you’re doing push-ups. And, since we’re on the subject of workouts, you should know that the ColorFit Caliber is IP68 certified, so you can sweat it out in the gym without worrying about damaging the device. 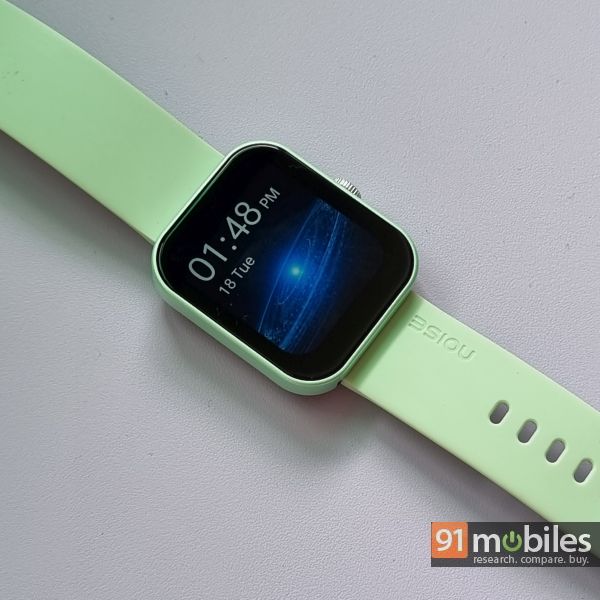 Display-wise, the Noise ColorFit Caliber features a 1.69-inch, IPS LCD screen with a resolution of 240 x 280 pixels. The display offers pleasant viewing angles and is plenty bright at 450 nits. So, you won’t struggle using the wearable outdoors, under the sun. Other than that, the screen is plenty responsive and picked up on all my swipes and gestures just fine. The wearable also offers a generous touch surface which was plenty accommodating for my pudgy fingers. Moreover, while the ColorFit Caliber doesn’t ship with support for Always-On display functionality, the watch does come bundled with ‘lift to wake the screen’ feature, which works quite well.

Don’t let the Noise ColorFit Caliber’s wallet-friendly price fool you – the wearable is loaded to the brim with fitness-tracking features and smart utilities. But, before I dissect the unit’s performance, you should know that the device can pair with both an Android as well as an iPhone. To connect the watch to your phone, you’ll need to download the company’s NoiseFit app. The utility offers a neat interface, although could do without the brand’s e-Store positioned dead in the centre. 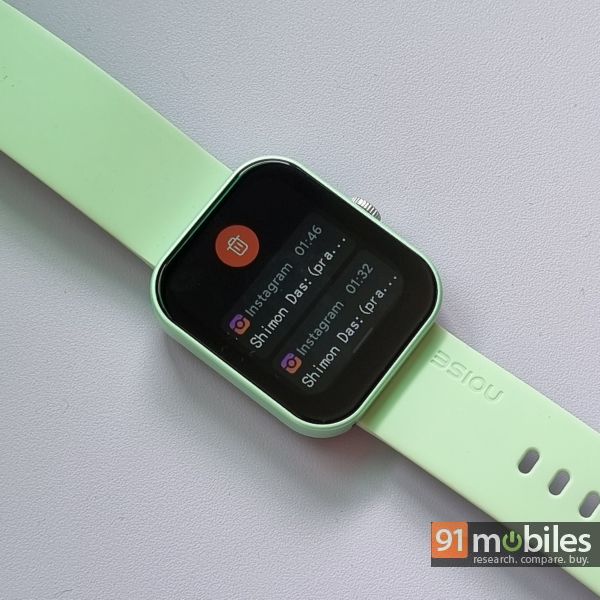 I’d also like to point out that you’ll have to use the app to enable certain features of the watch, including updating the firmware, setting alarms or reminders, and mapping running / walking routes. Additionally, the wearable offers quick replies for select messaging services like SMS on Android. You can edit the replies in the company’s companion app and the watch can store up to five quick replies at a time. Speaking of which, you should know that the Noise ColorFit Caliber can relay notifications over to your wrist from a myriad of apps, however, you’ll have to use your phone to read the message / email in its entirety. 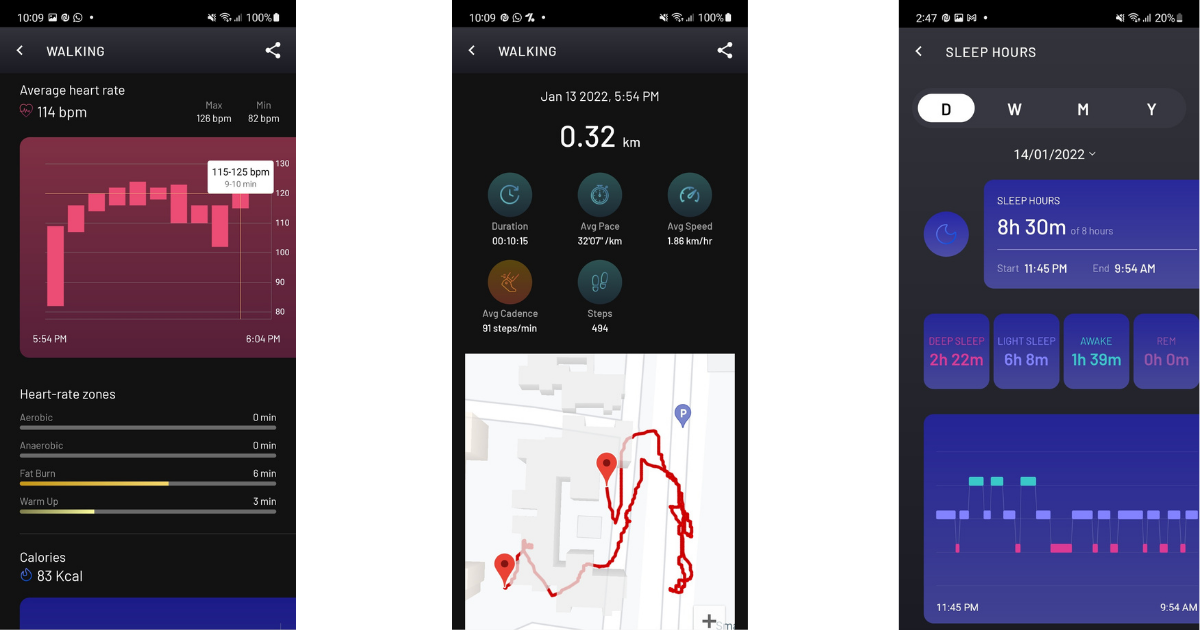 As for fitness tracking, the Noise ColorFit Caliber can track steps with reasonable accuracy. During my stint with the device, I noticed that the watch would add 8-10 additional steps to the overall tally, which is well within the margin of error. That’s not all, the wearable can also map walks and runs quite well. That said, you will have to carry your phone as the device doesn’t ship with a built-in GPS. Other than that, the wearable offers idle alerts or sedentary reminders too, that can be enabled and tweaked by accessing the device’s companion app. I’d also like to add that the wearable can track the calories burnt across a myriad of different activities, the likes of which include cycling, Zumba, boxing, etc. 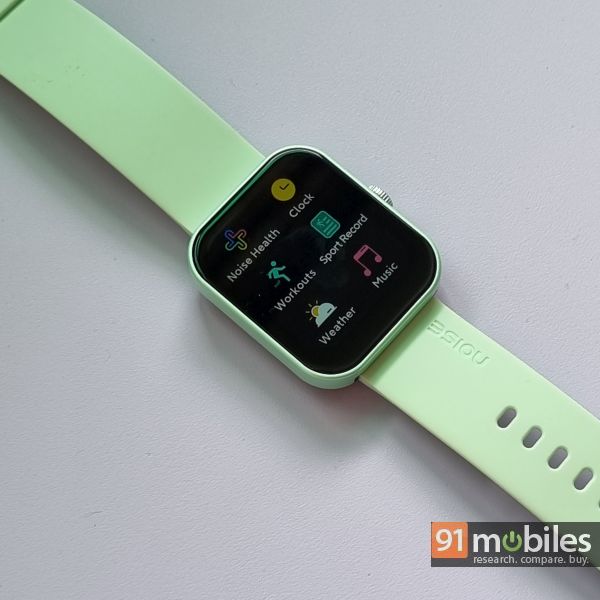 Moving on, the wearable offers on-demand SpO2 and heart rate measurements too, the readings for which were on par with a pulse oximeter. Interestingly, the wearable can also measure a user’s body temperature, which is somewhat of a rarity in this sub Rs 2K price segment. I did test the measurements against a digital thermometer and much to my surprise, the wearable outputted similar readings. I’d also like to add that the watch can track a user’s sleep cycles too. To wit, I found the wearable’s sleep tracking fairly accurate. That being said, the ColorFit Caliber can only share insights on deep and light sleeping patterns, so if you were looking for a fitness tracker that can share insights on your REM sleep, you’ll have to look elsewhere. 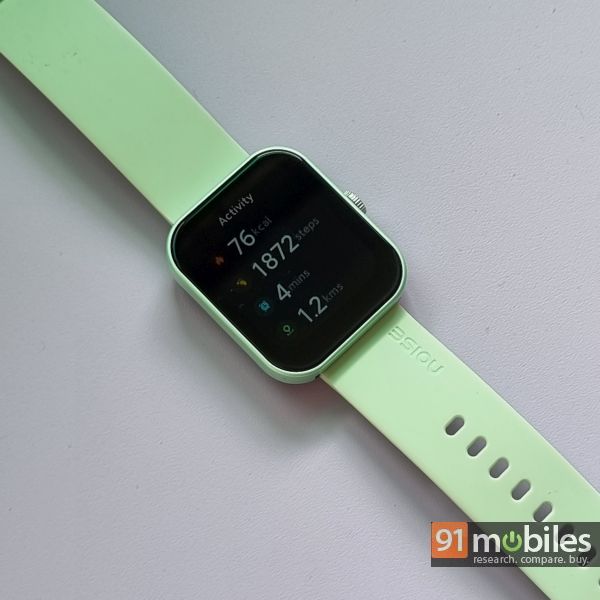 As for the battery backup, Noise claims the ColorFit Caliber can last up to 15 days on a single charge. Truth be told, I wasn’t able to deplete the unit’s battery completely during my stint with the device. In fact, after spending a week with the watch, I was able to get the battery down to about 45 percent, which is great. Rest assured, buyers opting for the ColorFit Caliber will rarely get battery anxiety.

The Noise ColorFit Caliber retails for Rs 2,499 in India and for the price, ticks most, if not all the right boxes. For one, the wearable offers a stylish design with interchangeable straps and even touts an IP68 rating. Moreover, the unit can track a user’s workouts and sleep cycles accurately too. Rest assured, if you were in the market for an affordable fitness-first smartwatch, then you’ll feel right at home with the Noise ColorFit Caliber.