OnePlus has undoubtedly cemented its position in the Indian smartphone market, though the company still has to fend and prove its expertise in the TWS space. Thankfully, OnePlus seems to have its ducks in a row as the company’s premium TWS headset – the OnePlus Buds Pro (review) – struck a chord with fans and critics alike. I was elated with the unit’s audio chops too and naturally, was looking forward to what the brand comes up with next. 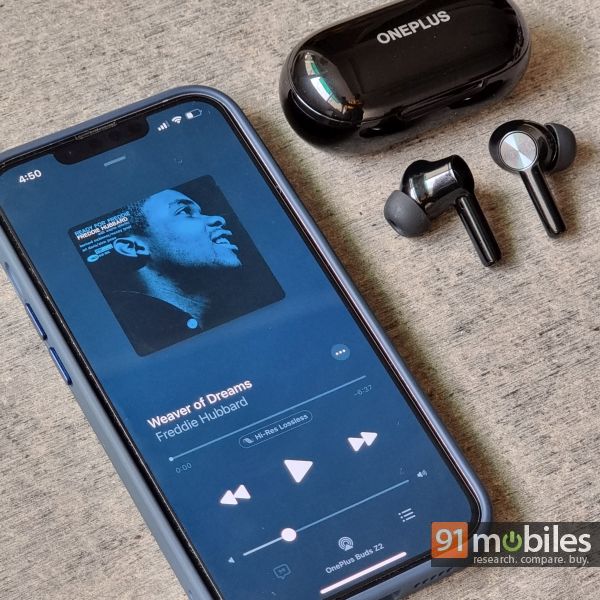 Enter, the OnePlus Buds Z2, an affordable TWS headset that costs Rs 4,999 in India. The earphones come as the successor to the OnePlus Buds Z (review) and offer premium features like ANC or Active Noise Cancellation, among other things. I managed to get my hands on a unit so, let’s take a closer listen and see if the OnePlus Buds Z2 is worth your hard-earned bucks.

OnePlus stuck with the “If it ain’t broke” mantra whilst designing the Buds Z2. In fact, from a distance, it’s impossible to tell the Buds Z2 from their predecessors – that is, unless you buy the Buds Z2 in its exclusive Obsidian Black avatar. I was sent the black colourway of the earphones for review too and sure enough, the pair looks exquisite decked out in a darker trim. On the flip side, the Buds Z2 sport a glossy finish that attracts smudges like moths to a flame. Consequently, if you want to save yourself the trouble of cleaning the earphones day in and day out, you might want to pick up the unit in the Pearl White colourway. 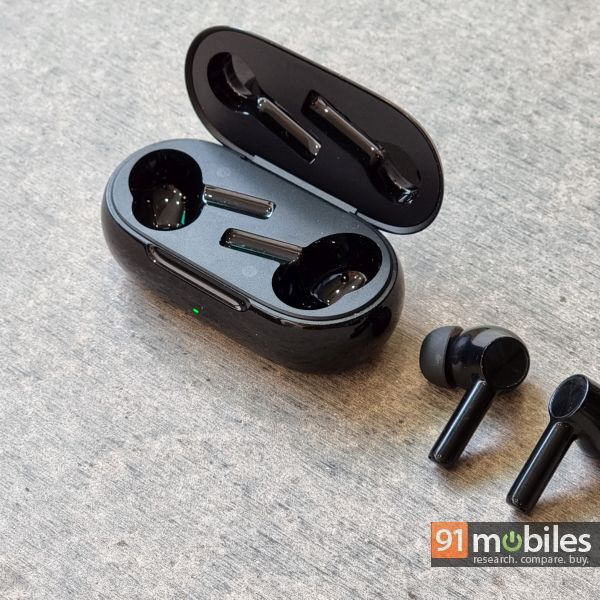 Now, despite adding ANC to the mix, the Buds Z2 offers a shorter stem than its predecessor. What’s more, the device retains Buds Z’s IP rating too. As such, the earphones are IP55 rated and consequently, are impervious to damage from moisture or sweat. What’s more, the Z2 is superbly comfortable to wear over extended periods too. In fact, each earbud weighs just 4.5 grams and the docking case is extremely sleek too. Pool everything together and the OnePlus Buds Z2 makes for an excellent set of earphones to take to the gym, or when you’re out for a run. 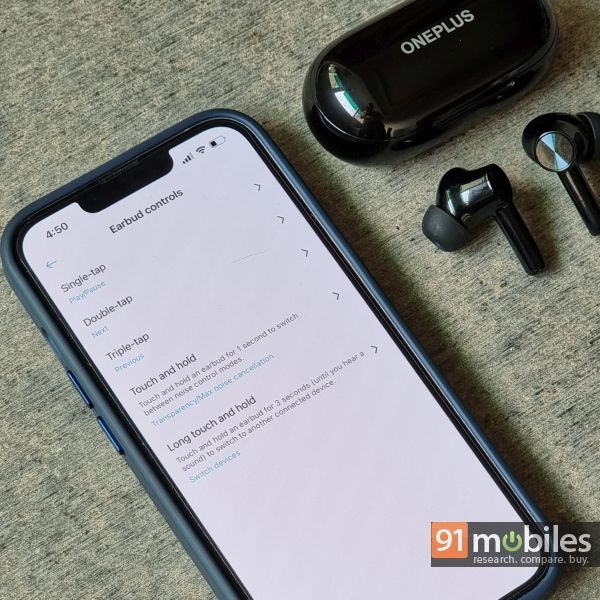 You’ll also get touch controls with the Buds Z2 which you can use to control the music playback, flip between ANC and Hearthrough modes, and answer or reject calls. The touch panels are positioned above the stems, underneath the circular bits and they pick up the user’s inputs like a charm. To wit, you can tap on either bud up to three times to toggle a command. What’s more, the earphones also allow users to customise the controls via the companion HeyMelody app. That’s not all, as the Buds Z2 also comes with support for automatic hear detection. Consequently, the buds will pause the music playback the second you remove an earpiece. Interestingly, the Buds Z2 is among the rare breed of TWS earphones that can pair with two devices simultaneously. That said, the process of switching between paired devices could be a tad more seamless. As things stand, you’ll have to hold the left or the right earbud for five seconds to switch to a different device. Regardless, OnePlus deserves a pat on the back for bringing some of the most sought-after features to its wallet-friendly earphones. 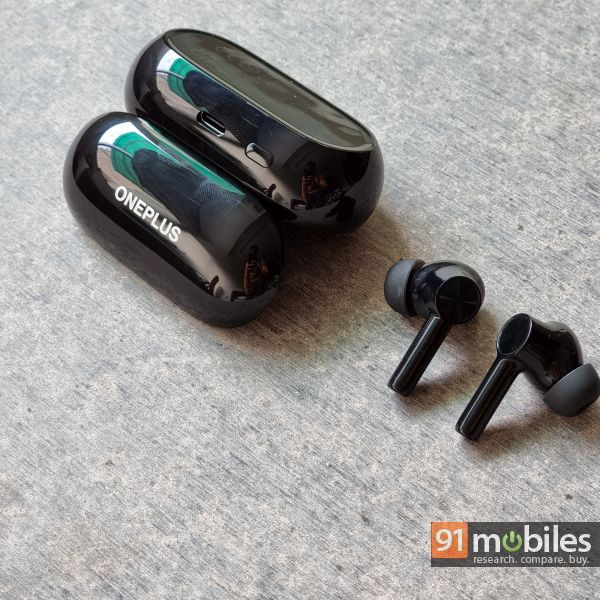 As prefaced previously, you can finetune certain aspects of the Buds Z2 via the HeyMelody companion app, including tweaking the earphone’s touch controls and updating the pair’s firmware. The app is available for both iOS, as well as Android devices, and features a tidy interface. That said, the utility doesn’t ship with a custom EQ and correspondingly, you won’t be able to change the Buds Z2’s sound output. That’s quite a bummer, as most competing products allow users to variate the sound signature via custom EQ presets. But, I digress.

The OnePlus Buds Z2 is backed by a pair of 11mm drivers positioned inside each earpiece. Now, per the brand, OnePlus is using the same 11mm drivers as found on the company’s flagship hearable – the OnePlus Buds Pro. As for the rest of the tech specs, the earphones connect to compatible devices via Bluetooth v5.2 and can operate across a frequency range of 20Hz – 20KHz.

The OnePlus Buds Z2 offers a typical U-shaped sound signature that puts a lot of emphasis on the low-end, as well as the highs. The mids, on the other hand, sound a tad recessed. Case in point, Red Hot Chili Peppers’ Californication wherein, the strums from the guitar as well as the kick drums subdue the vocals by quite a bit. What’s more, I noticed that the unit’s bass output, albeit replete with texture and depth, was quite boomy. Consequently, you’ll notice that the beats eat into the rest of the frequency spectrum and overpower the mids consistently. 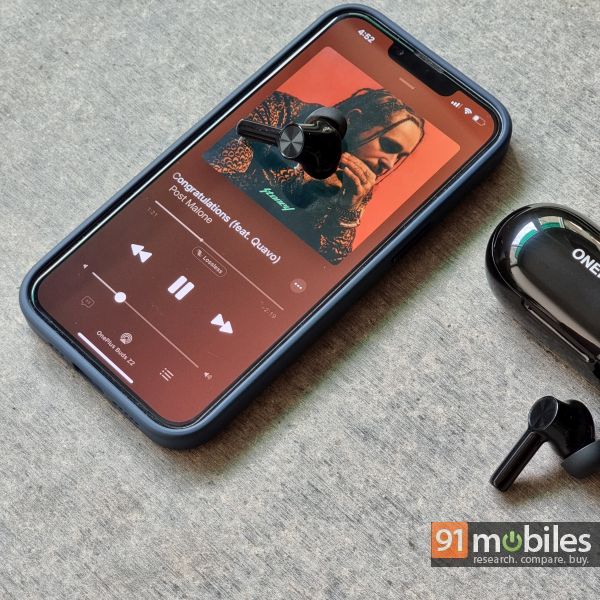 Here’s another example – if you listen to the first verse of Paradise by Bazzi, then you’ll undoubtedly get carried away by the singer’s melodious voice, as well as the soothing key tabs from the piano. That said, during the chorus, the beats don’t just sound echoey, but they overshadow the notes from the piano quite a bit too. Don’t get me wrong – the Buds Z2 doesn’t sound inherently bad. In fact, if you’re in the market for a pair of TWS buds that offer thumping bass, then you’ll find plenty to like here. Be that as it may, the Buds Z2’s affinity to the low end might not resonate well with those who like to listen to a lot of acoustic blues. That’s not all, as buyers looking for a bite in songs from the rock genre will be left wanting for more from the pair too. In fact, unlike the similarly-priced Nothing Ear (1) (review), the Buds Z2 sounds a tad relaxed. On the bright side, the earphones offer satisfactory imaging and consequently, you should be able to make out the different instruments playing in a song seamlessly. 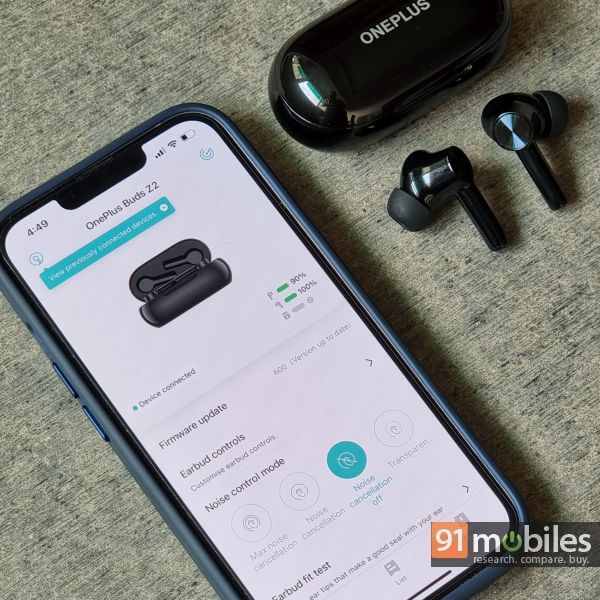 Now, if you own a OnePlus phone, then you can leverage the capabilities of the Buds Z2 even better. Particularly, the earphones can breathe new life into tracks and media encoded in Dolby Atmos. The earphones also ship with a low-latency gaming mode of sorts that reportedly brings down in-game audio latency to 94ms. Quite frankly, I use wired earphones to play games on the fly as it allows me to hone down on my enemy’s footsteps quicker. That said, the Buds Z2 should offer a good experience for casual / story-based games. Moving on, I was quite happy with the pair’s ANC chops too and the earphones can tune out a good chunk of environmental noise. Interestingly, Buds Z2’s companion app offers two ANC modes with different noise-cancelling strengths. That said, I couldn’t tell the difference between the two, and for the most part, I used the earphones with the ANC set to max. 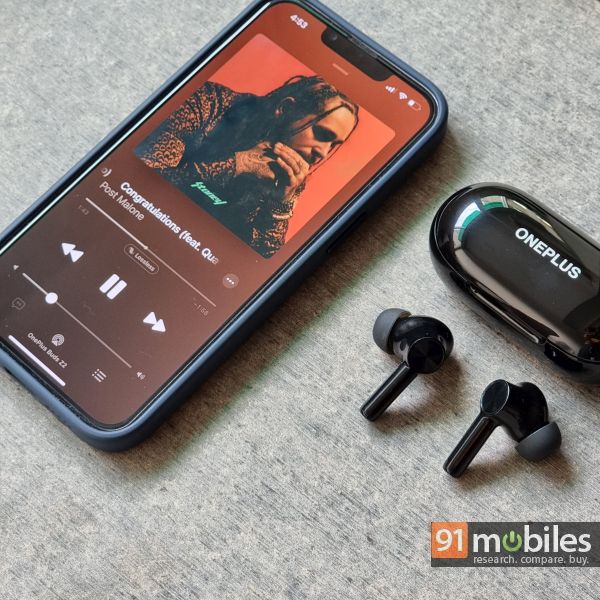 The Buds Z2 lasted me around four-five hours off a single charge and that’s with the ANC enabled. The bundled case adds around four charge cycles too, so you needn’t worry about the Buds Z2’s battery backup. I should also add that the earphones support Google’s Fast Pair service and consequently, should show up on your Android phone the second you open the case’s lid.

The OnePlus Buds Z2 retail for Rs 4,999 in India and for the price, get a couple of things right. For one, the pair are superbly comfortable and can even be used for workouts, thanks to their IP55 rating. Furthermore, the Buds Z2 has been positioned quite competitively too and despite that, the pair doesn’t forego premium features like ANC, support for Google’s Fast Pairing, and the works. That said, the earphones’ sound signature leaves something to be desired and buyers looking for a pair of TWS buds with a tighter, more refined low-end can instead pick up the Nothing Ear (1) as well. Do let us know in the comments below which TWS earphones would you buy and for everything tech, stay tuned to our blog.