I firmly believe that 2018 was the most innovative year for smartphone designs. You see, in a quest to achieve bezel-less utopia, smartphone manufacturers experimented with numerous designs to see what would stick to the board. 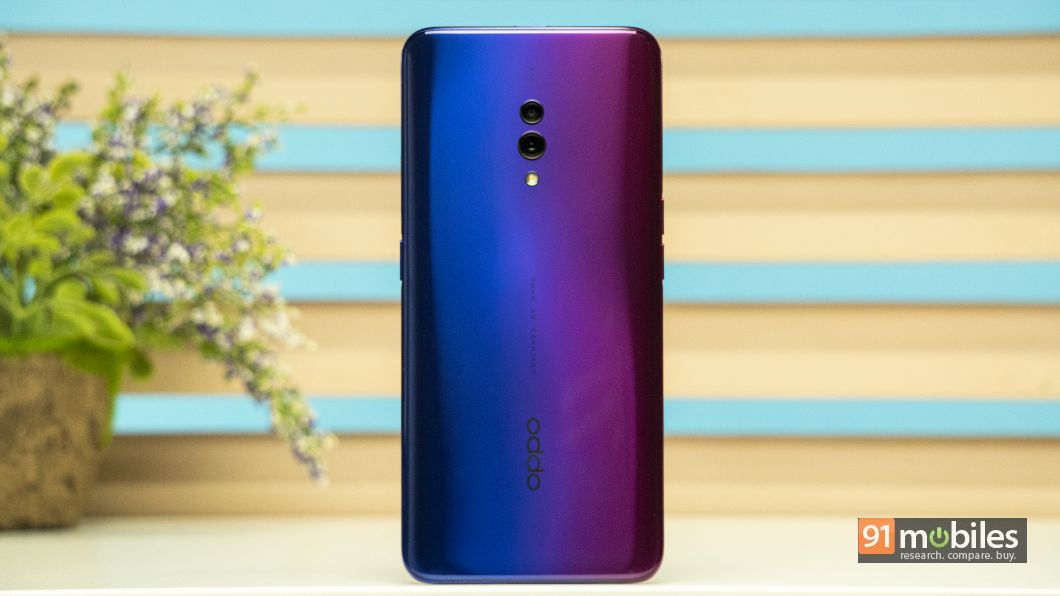 And, if the recent phone launches are anything to go by, then it seems that OEMs have found a liking for phones with a pop-up selfie camera. From the Vivo Z1 Pro (review) to the Realme X (review) and even the Redmi K20 duo (review), smartphones with a motorised selfie camera can be found willy-nilly. Now, Chinese tech giant OPPO has a new contender in this space in the form of the OPPO K3. I managed to get my hands on a unit and after putting it through its paces, here’s what I make of it.

What you need to know

The OPPO K3 isn’t a unique proposition and for the price, offers more or less the same features as the competition. Therefore, I thought it’d be fun to pit the phone against the other similarly-priced handsets as it’ll help you understand the smartphone’s strengths and flaws better. 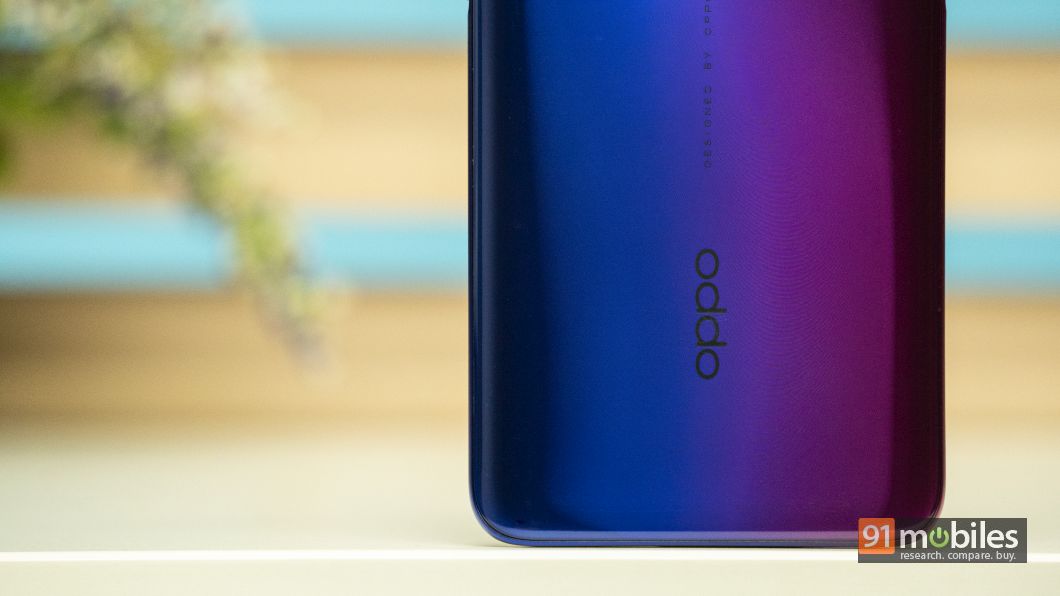 Alright, let’s start with the design of the phone. Now, the OPPO K3 looks exactly like the Realme X, albeit comes in fancier colours. I was sent the Aurora Blue unit of the device for review and let me tell you – the handset is a head-turner. The gradient finish towards the back of the phone looks slick, and it draws people like moths to a flame. Furthermore, thanks to its subtly curved edges and the use of plastic in its construction, the K3 is quite grippy, which in turn bodes well for one-handed usage. 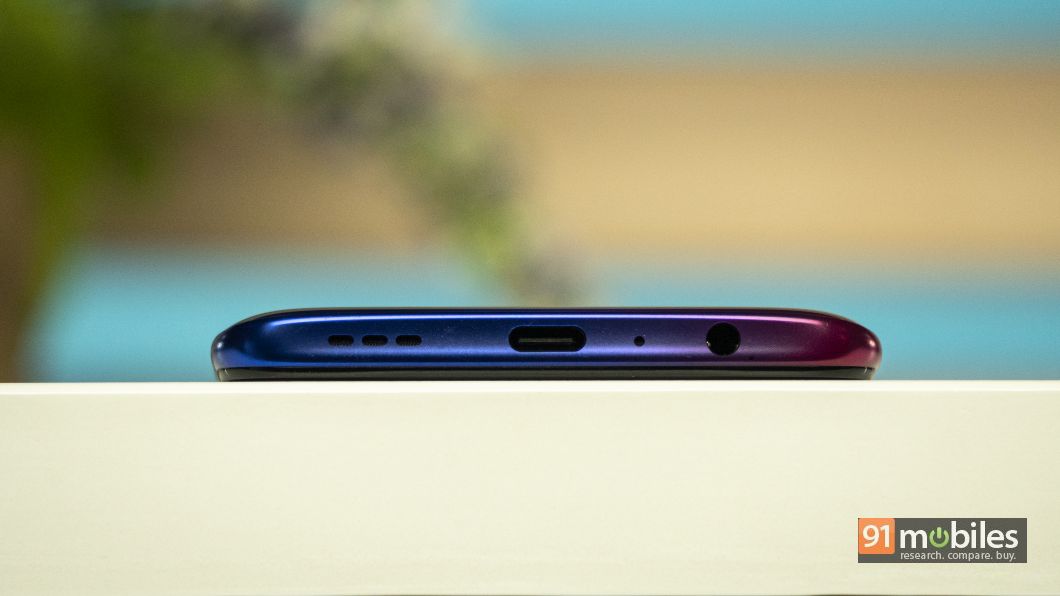 When compared to the Vivo Z1 Pro, the OPPO K3 edges in front comfortably. Here’s why –

1 – The OPPO K3 offers an immersive, full-view display which is void of bezels or punch holes.

2 – The OPPO K3 features the newer USB Type-C port, as opposed to the micro-USB connector on the Vivo Z1 Pro.

Now, the Vivo Z1 Pro does offer a more reliable capacitive fingerprint sensor towards the back, but the K3’s in-display fingerprint sensor is no joke either. While it does take some getting used to, I didn’t face any issues unlocking the phone after using it for a day or so. I’d also like to point out that the K3 comes with face unlock too, which worked well during the day. The selfie camera popped up quickly, scanned my face and promptly unlocked the phone. However, at night, the handset struggled to identify my face correctly, which resulted in a significantly higher failure rate. 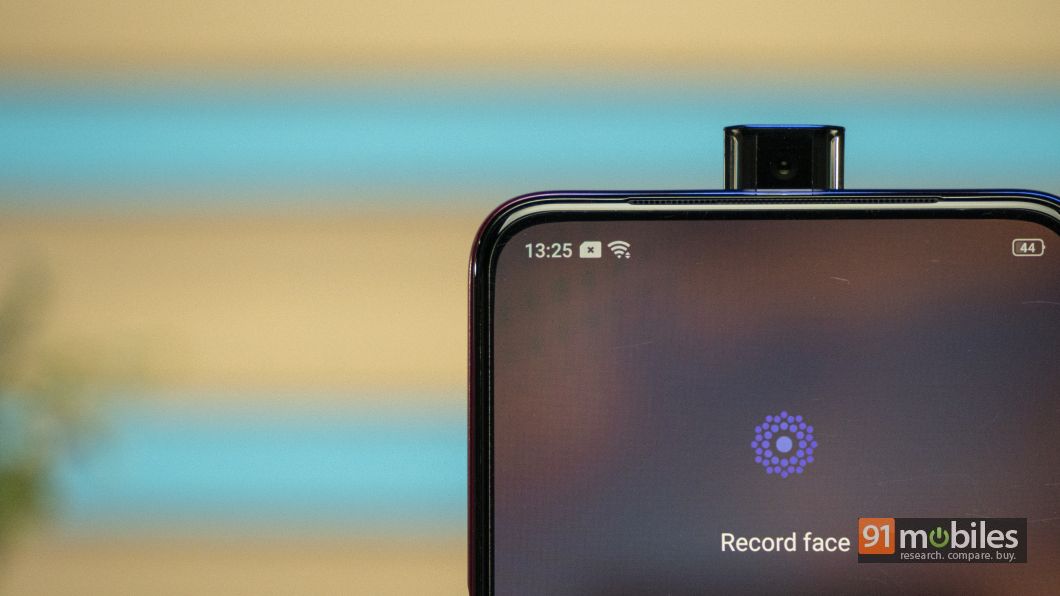 Now, fret not as I face similar issues with other devices too. In fact, barring the iPhone X and the XS duo (which uses an IR sensor in conjunction with the selfie camera), most, if not all smartphones face the same fate. 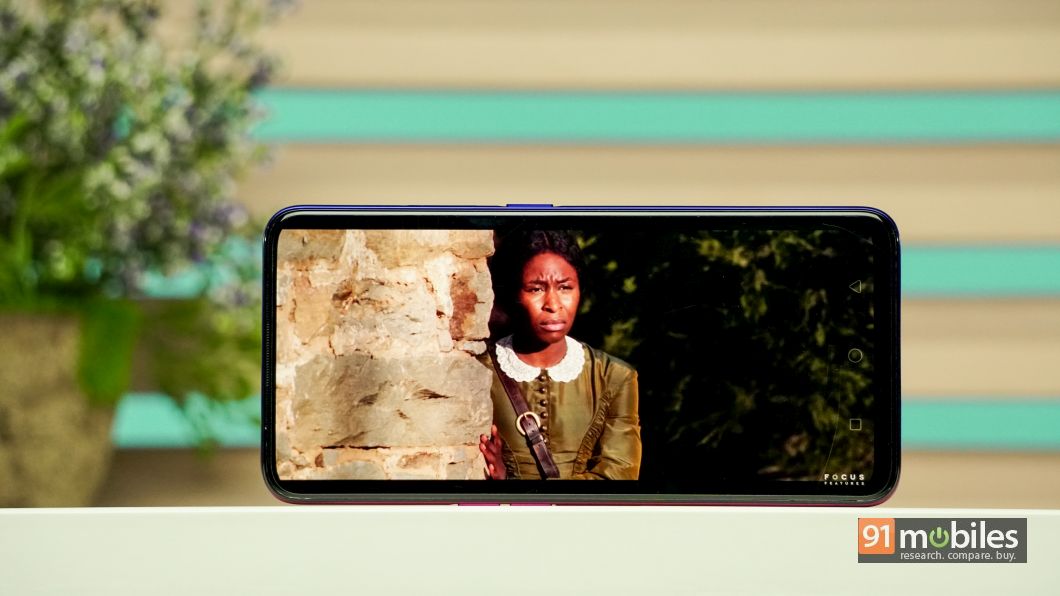 Coming to the display, the OPPO K3 ships with a 6.5-inch, Super AMOLED, FHD+ panel which, once again, offers punchier colours and more vibrancy than Vivo Z1 Pro’s IPS display. Moreover, as I mentioned, the K3’s screen ships with no cutouts whatsoever and therefore, you’ll be able to enjoy your favourite movies and shows on the display to the fullest. The panel gets adequately bright too, so using the K3 under scorching Delhi sun didn’t pose any problems either. 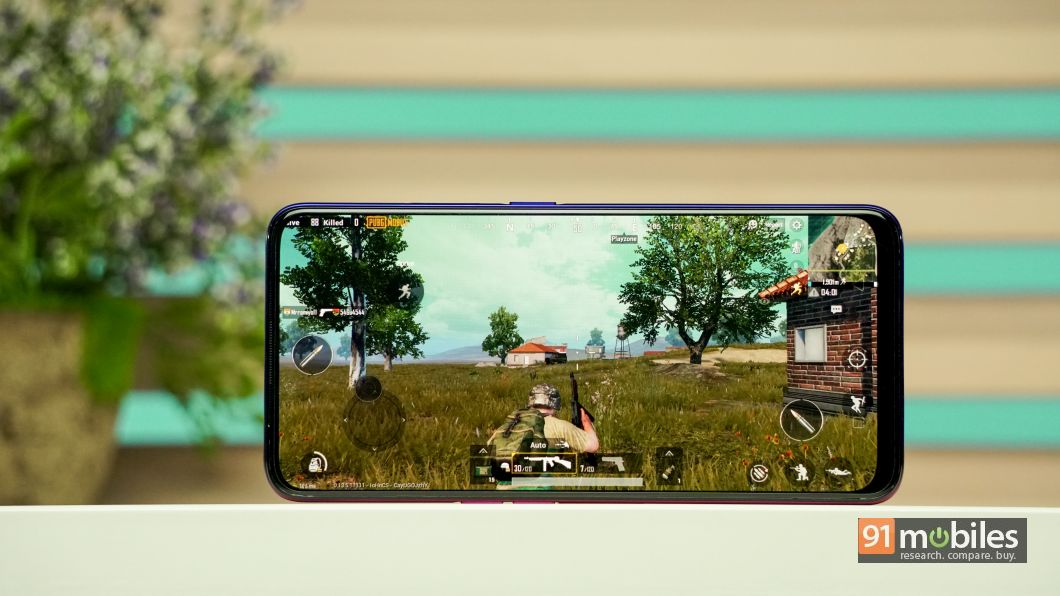 Much like most of you reading this review, I play a lot of PUBG too. To that extent, the Snapdragon 710 processor powering the OPPO K3 didn’t disappoint me as I could comfortably game on the phone with the graphics set to HD. Now, compared to the competition, the Vivo Z1 Pro should offer slightly better frame rates owing to its marginally faster Snapdragon 712 processor. However, during my testing, I didn’t see any noticeable difference in the performance of the two phones. What’s more, if you were dillydallying between the Realme X and the K3, then you should know that OPPO’s offering ships with more RAM (6GB as opposed to 4GB) for the base variant. Therefore, while both devices should perform the same, the OPPO K3 will have an edge when it comes to multitasking and holding apps in memory. 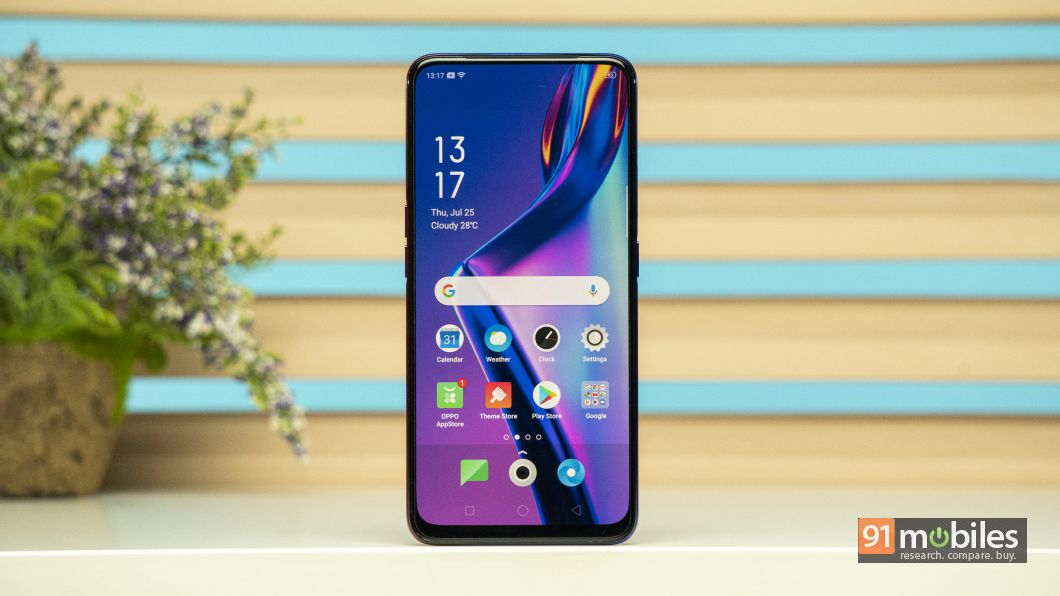 During my time with the OPPO K3, I rarely ever yearned for more horsepower. Applications opened swiftly, games ran as smooth as butter and there was nary any hiccup whilst jumping from one app to the other. If you’re getting a sense of déjà vu, then I don’t blame you. Much like Qualcomm’s Snapdragon 625 processor, the newer SD 710 chip has been widely used in a lot of devices too. The octa-core processor is quite capable and can hold its own when it comes to intensive gaming or managing resource-hungry workloads. 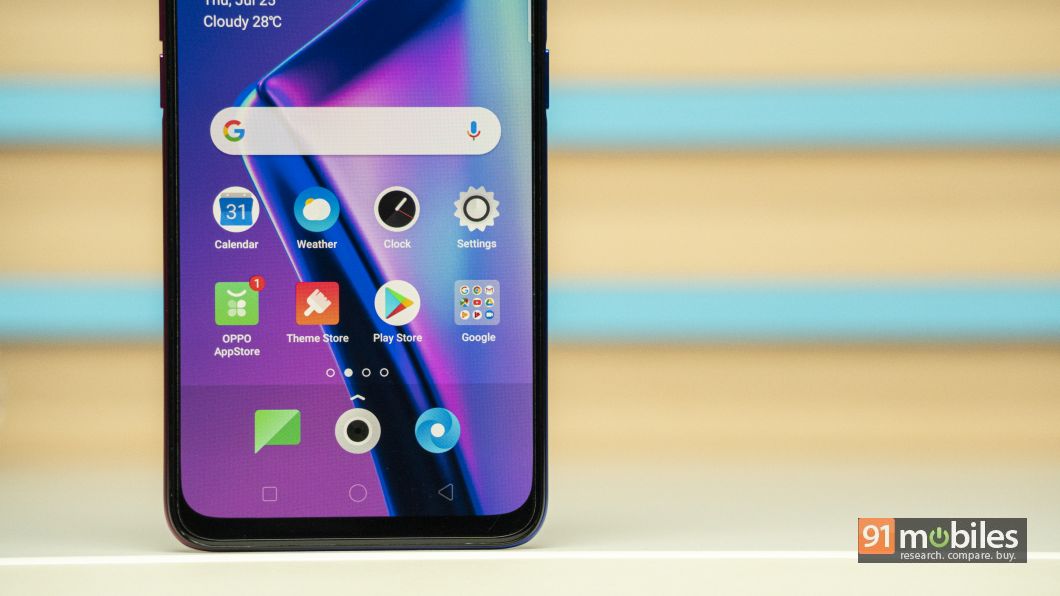 As for software, the OPPO K3 boots the company’s ColorOS v6 on top of Android Pie. Interestingly, the Realme X also utilises the same overlay and therefore, you can head over to my colleague’s review of the phone if you’d like to learn more about the custom skin. For everyone else, here’s the TL;DR –

1. The OPPO K3 comes bundled with a ton of bloatware, however, most of it can be removed manually.

2. The custom skin adds a ton of interesting features, albeit sucks a lot of system resources. In fact, I never had over 4GB of memory available for use out of the allotted six gigs during my stint with the phone.

3. There is no system-wide dark theme, but you do get support for gesture-based navigation on the phone. The gestures don’t require a steep learning curve and you should get acclimated to them in a jiffy. 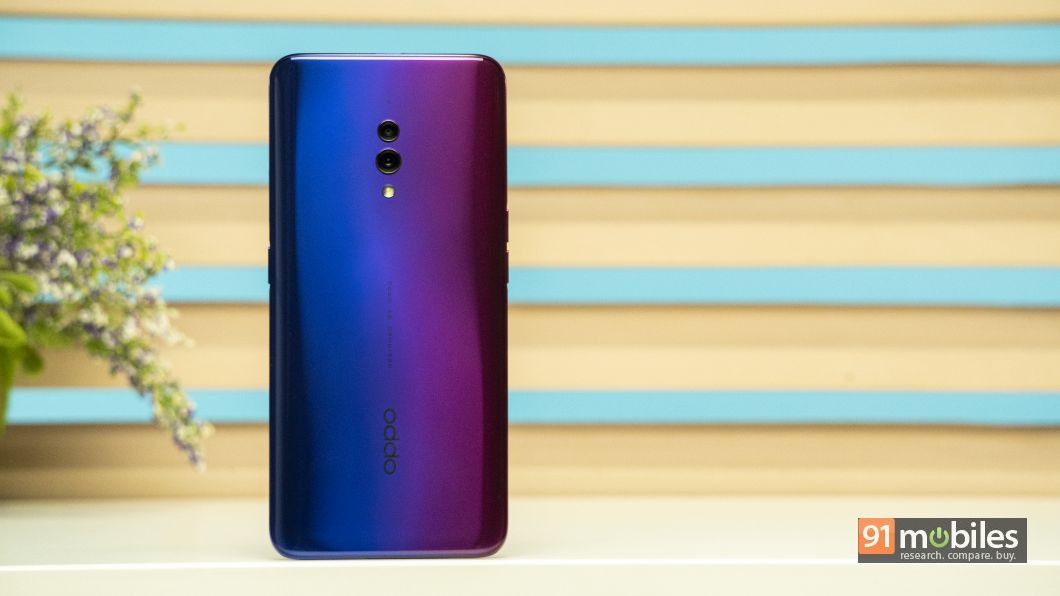 The OPPO K3 also shares the same battery as its distant cousin, the Realme X. Both the devices are fuelled by a 3,765mAh cell which lasts a good chunk of time. You’ll still have to plug in the phone every night but for what it’s worth, I never felt any battery anxiety during my time with the K3. To give you a better picture, the OPPO K3 lasted a whopping 16.5 hours in our battery loop test, which is a fantastic figure. 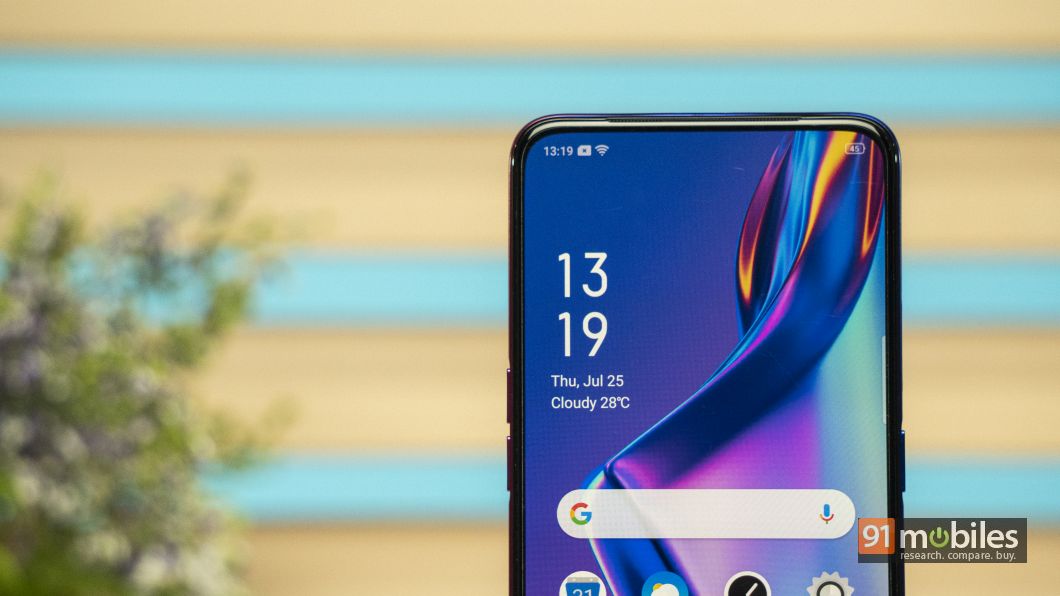 In the camera department, the OPPO K3 ships with dual 16MP and 2MP sensors towards the back, along with a 16MP selfie shooter upfront. Now, on paper, the Realme X undoubtedly wins the bout owing to its 48MP sensor. However, in practice, the K3 clicks equally pleasing photos. Allow me to explain: 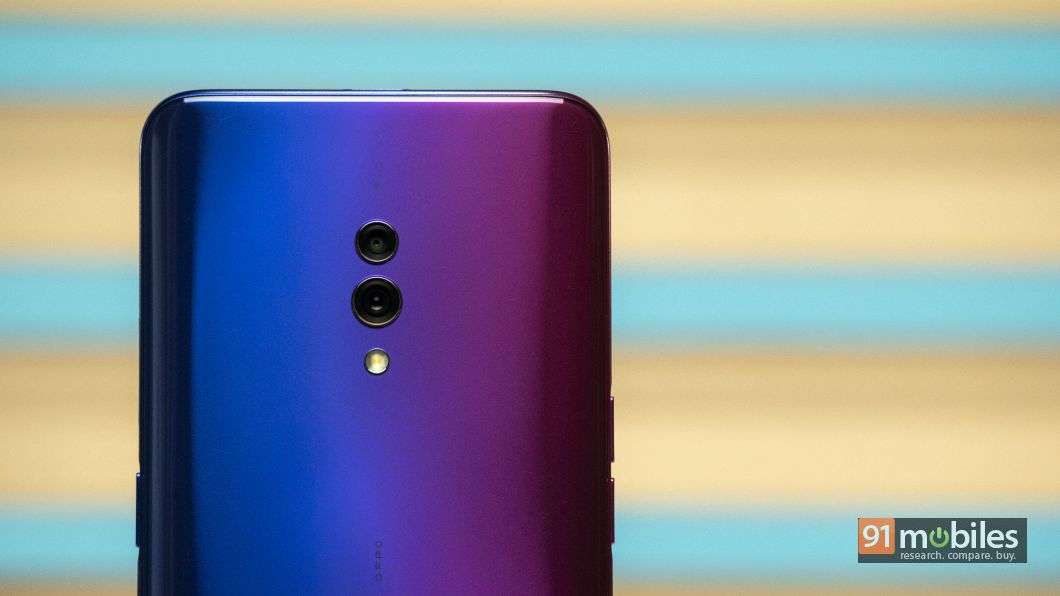 1. Compared to the Vivo Z1 Pro, both the Realme X as well as the OPPO K3 click more vibrant and dramatic photos. Now, my taste aligns with the colour science of the K3 as well as the Realme X which is why, I find shots from the two devices more appealing than the ones from the Z1 Pro. However, if you want more realism in your pictures, then the Z1 Pro will serve you better. 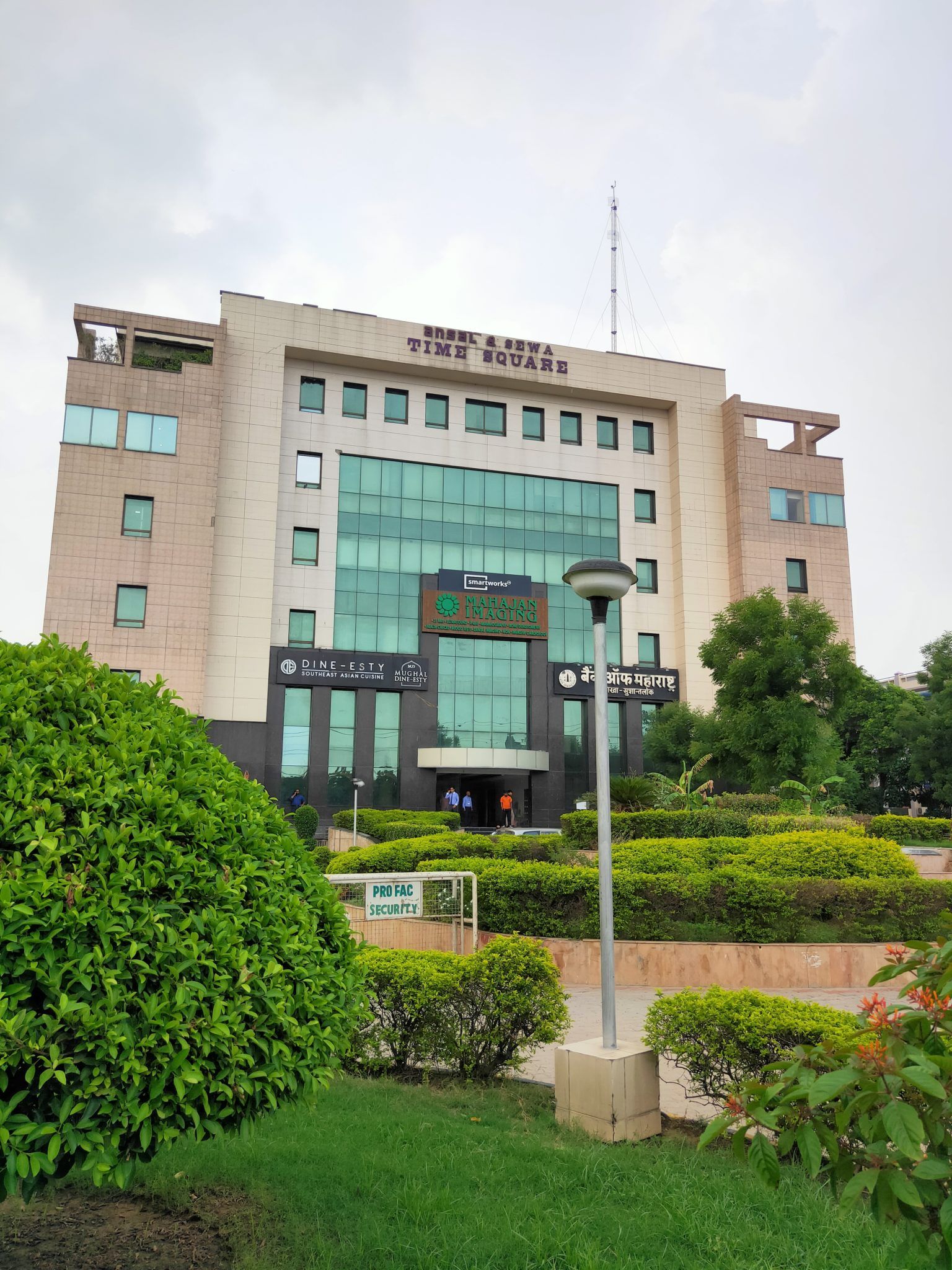 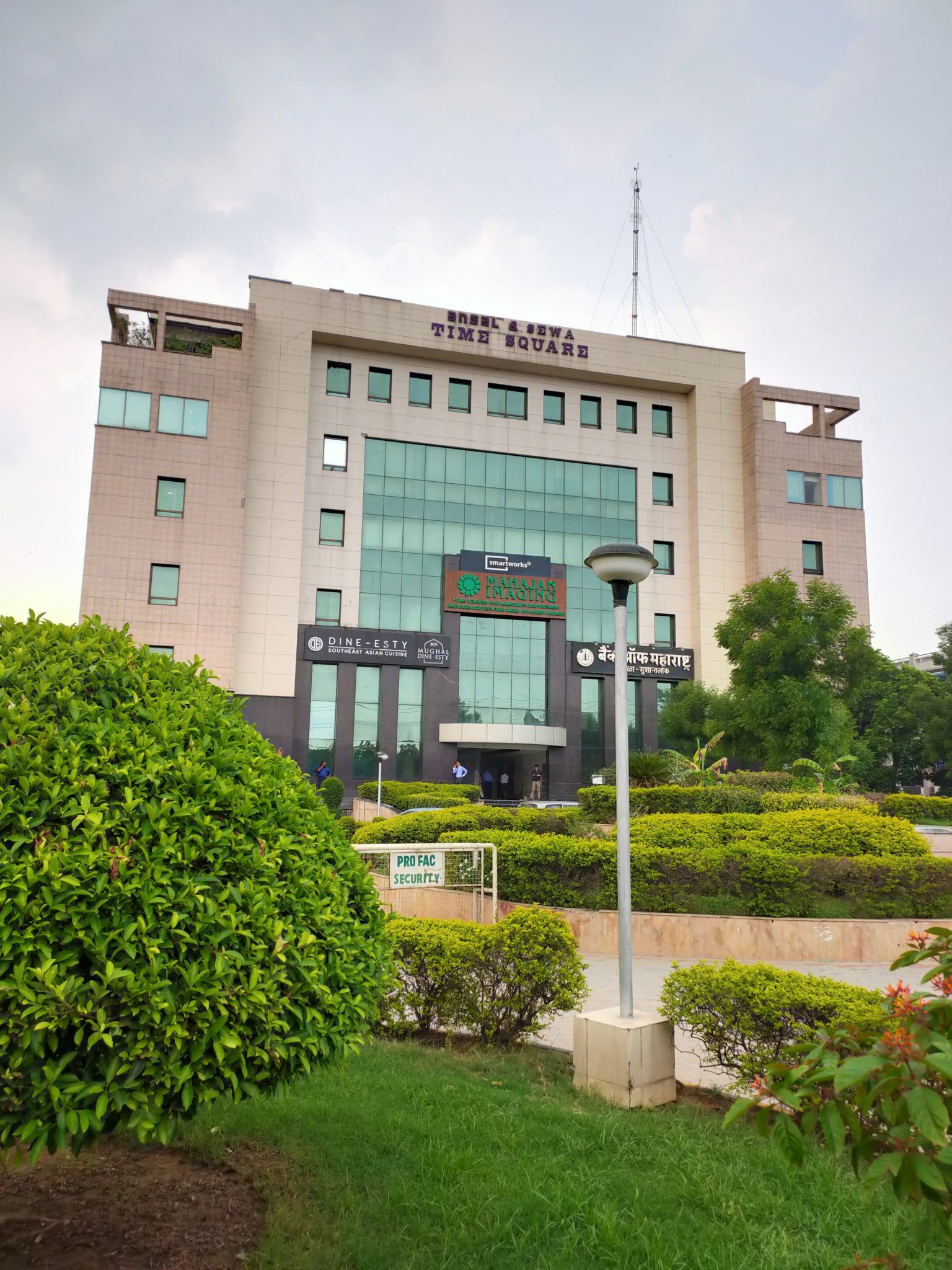 2. Between the K3 and the Realme X, I preferred photos from the K3 owing to a greater amount of details in the handset’s shots. Take for instance, the snap of my office building. Now, on face value, the two photos are indistinguishable but upon zooming in, you can clearly see that the antenna at the top of the building, along with the bushes towards my immediate left are better defined on the K3. Now, you could just click a picture with the Realme X in 48MP mode and get away with more details, which works great when you’re shooting landscapes. But, if you’re looking to capture a moment, then you’ll be better served with a device’s auto mode and that’s where the K3 shines brighter.

3. When it comes to selfies, both, the Realme X as well as the OPPO K3 are neck and neck. While I liked the sharpness from Realme X’s selfie shot, the photo from the K3 was more evenly exposed. Correspondingly, if you’re an avid selfie-taker, then you can’t go wrong with any of the two phones. That said, the OPPO K3 exhibits weird artefacts along the edges of the subject when shooting photos in portrait mode with the front camera. The effect isn’t as pronounced when you’re looking at the photo on the phone’s screen but it’s quite evident upon zooming in. On the contrary, the Realme X’s front camera wasn’t held back by this shortcoming. 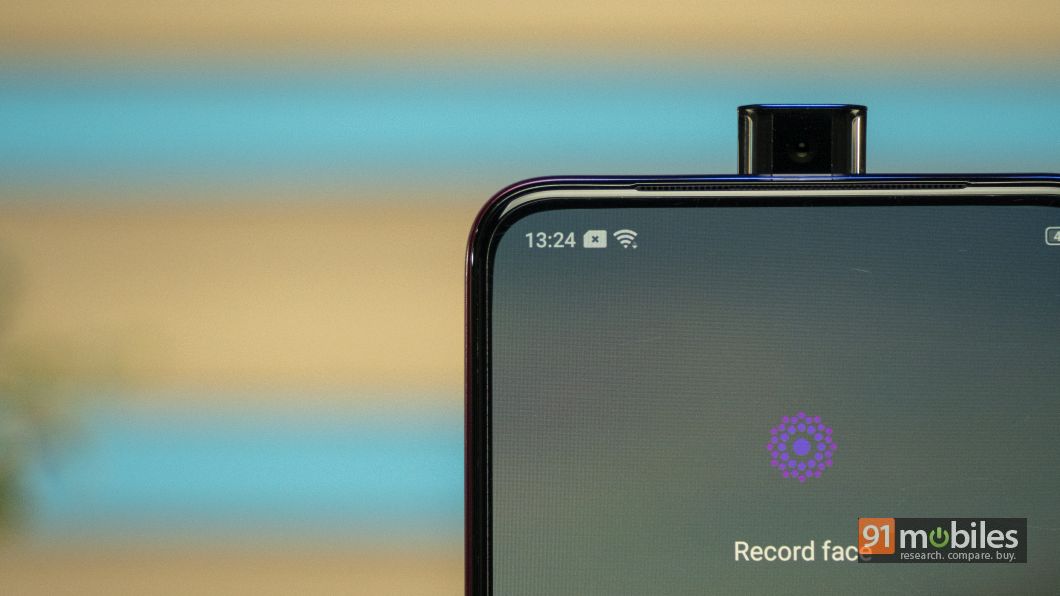 4. The Realme X gets my vote when it comes to shooting portrait photos from the rear-facing camera. While the OPPO K3 clicks good portrait shots too, photos from the Realme X’s sensor had a more convincing blur effect. What’s more, while the highlights were a bit blown out on the K3’s shot, the Realme X exposed the entire scene properly.

5. As is the case with most smartphones, the OPPO K3 struggles with reds too. Case in point, the macros of flowers I’ve posted wherein, it feels as if the petals have merged in the photos. 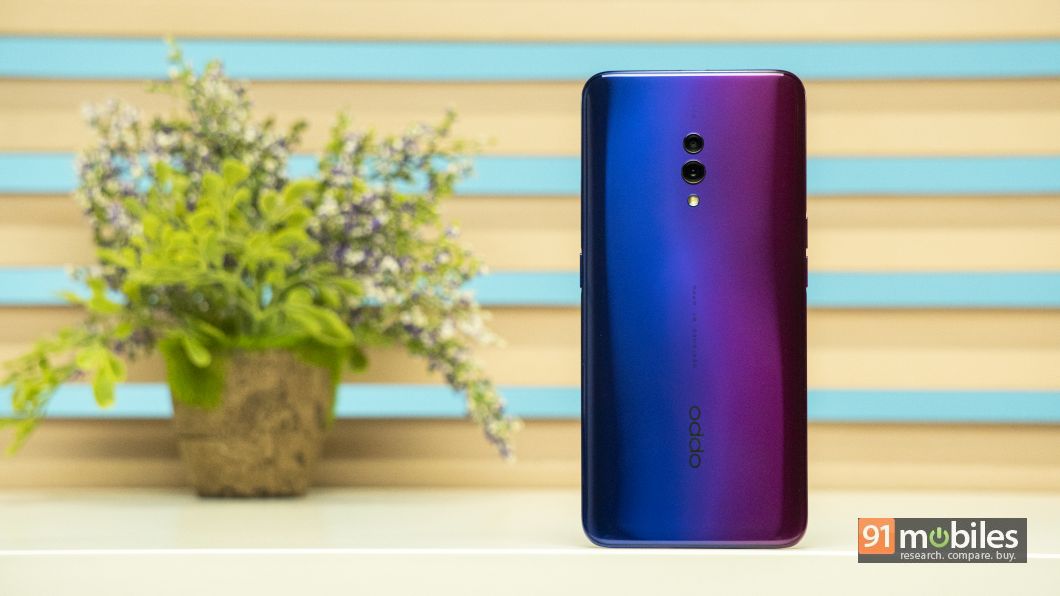 6. Everything considered, the OPPO K3 is a fantastic pocket camera, and is on par (and at times even better) than the competition. The handset’s rear-facing cameras clicked fantastic photos during the day with stellar dynamic range and punchy colours. The front snapper clicks detailed selfies too, and the camera setup didn’t disappoint me after the sun had set either.

So, should you buy the OPPO K3? Well, the handset starts at Rs 16,990 and for the price, is a great deal. The phone performs well, clicks stellar photos, lasts a good while and it looks the part of a premium product too. Consequently, when pit against the Vivo Z1 Pro, the handset comes across as a clear winner. Unfortunately for OPPO, the Realme X is hot on its tail and it costs exactly the same as the company’s latest offering. Now, choosing between the two phones is no easy feat but, if you’re a performance head, then you’ll appreciate more RAM on the K3’s base model. Moreover, as part of an introductory offer, buyers opting for the K3 will also get Rs 1K cashback on Amazon, which makes the smartphone seem even more enticing than it already is. 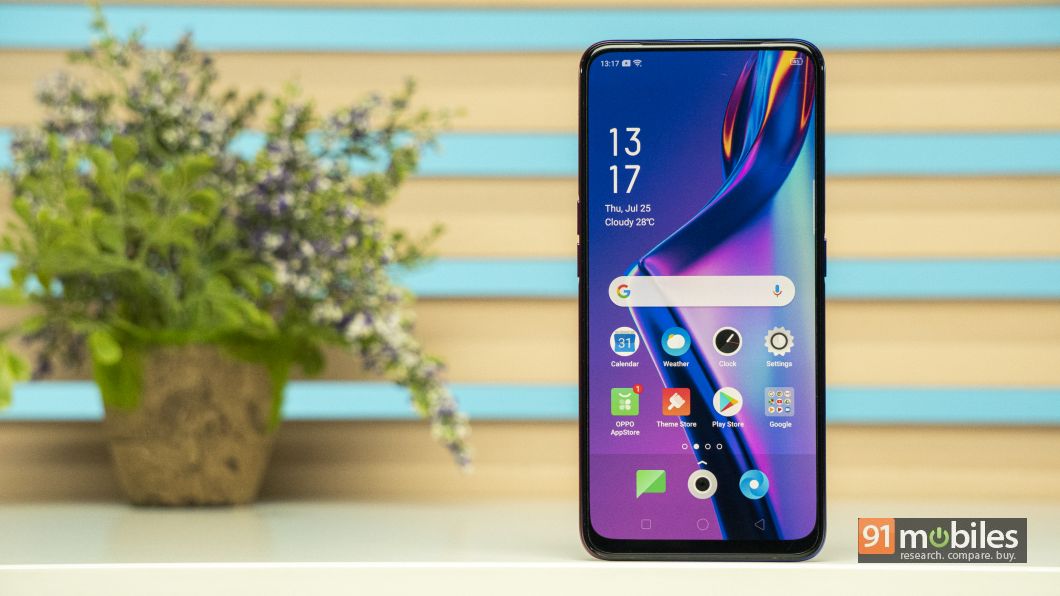 On the flip side, if you have a penchant for photography, then the Realme X’s 48MP shooter will sway you to the brand’s doorsteps. All in all, the K3 has undoubtedly spiced things yet again in the affordable segment and it’ll be interesting to see what these brand wars entail for the future.