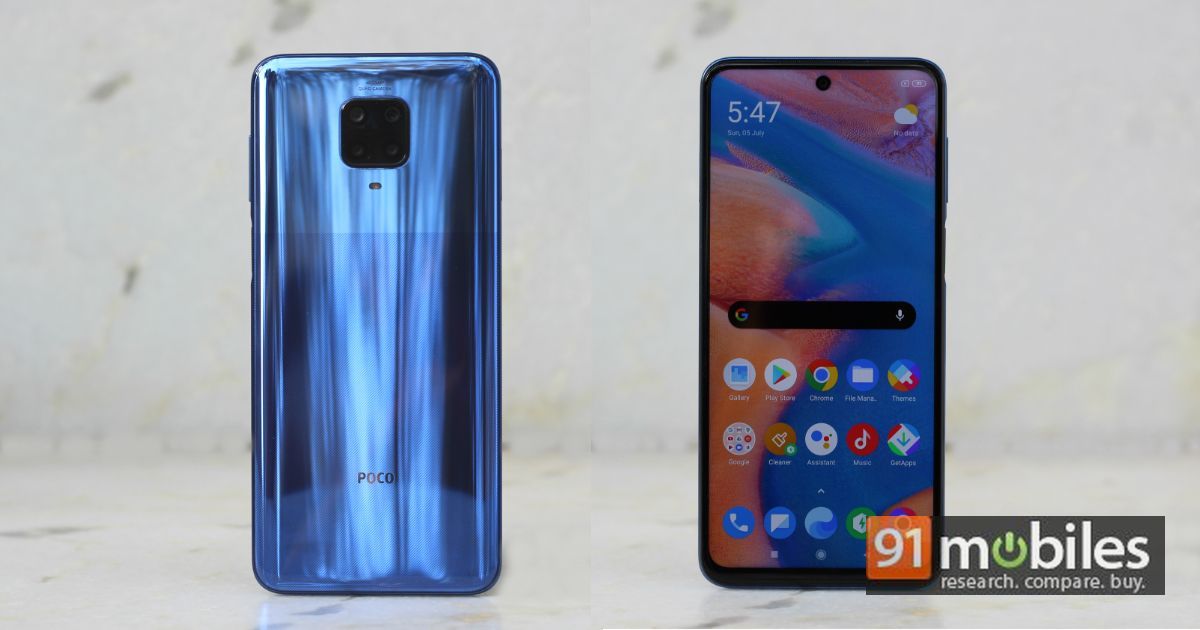 POCO has been present in India for two years now and surprisingly the brand had only two phones in the market until a few moments ago – the wildly popular POCO F1 (Review) and the sub-Rs 20,000 POCO X2 (Review). Both of these smartphones made enough of an impact to make POCO a brand to watch out for. The company has been a bit of a disruptor, launching powerful phones at really affordable prices. And now, POCO has launched its third phone in India, called the POCO M2 Pro. But is it just as disruptive as previous phones from the brand?

The POCO M2 Pro is part of a new series from the brand. It is the company’s most affordable phone yet, priced under Rs 15,000. For its price, the POCO M2 Pro boasts respectable specifications, including the Snapdragon 720G chipset, 48MP quad cameras, FHD+ display, and 33W fast charging support, among other things. Yes, a lot of these features are shared by the Redmi Note 9 Pro, which Xiaomi launched in India a little while ago. In our POCO M2 Pro review, we try to find out just how different the phone is from the Redmi Note 9 Pro or if it’s all a deja vu.

The POCO M2 Pro is a mix of the Redmi Note 9 Pro and Redmi Note 9 Pro Max, which means it’s a familiar phone that offers little in terms of uniqueness. That being said, if you’re able to move beyond the similarities, there isn’t too much to complain about the smartphone. The POCO M2 Pro is a powerful device for its price and offers an attractive display, although its speaker and cameras may leave you wanting for more. 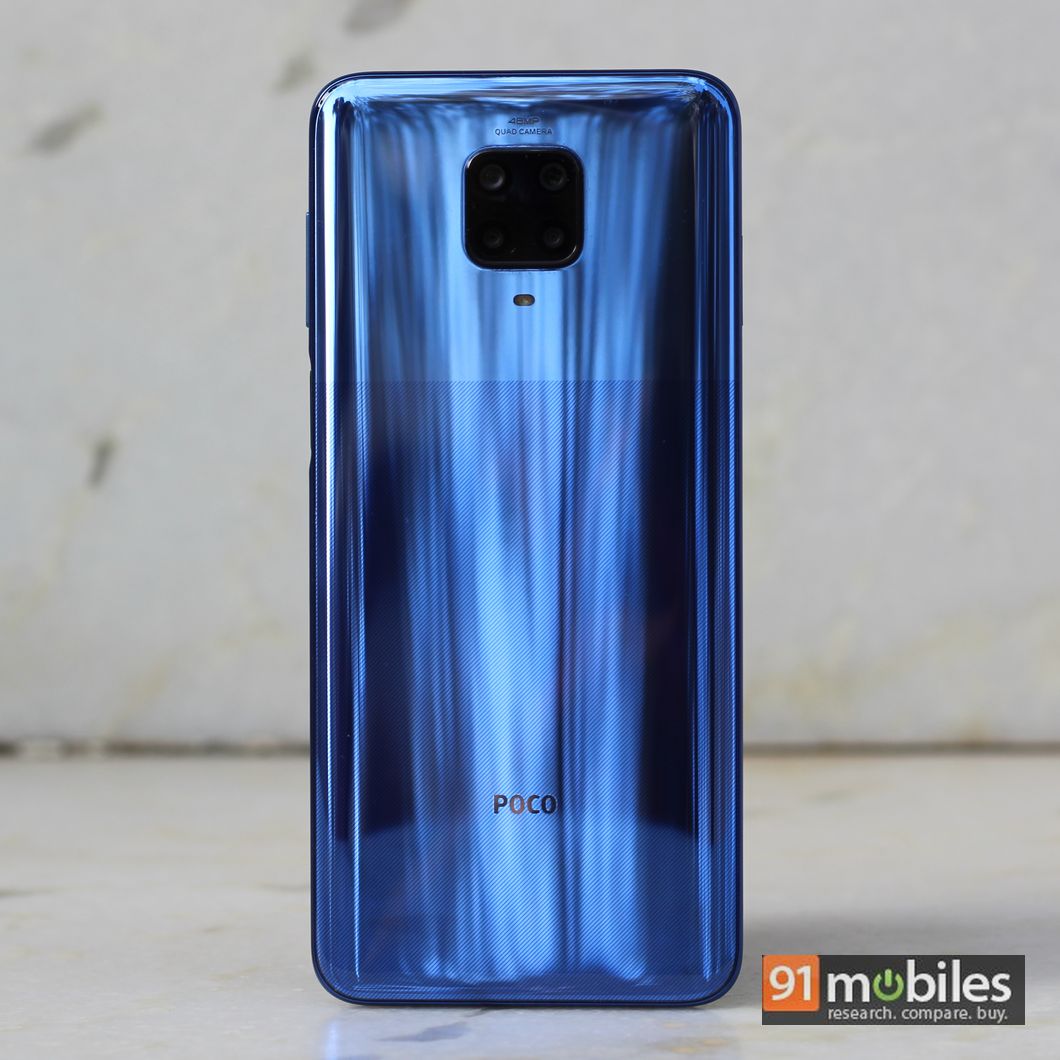 If you’ve seen the Redmi Note 9 Pro, then you’ve seen the POCO M2 Pro. The design is identical to the budget Redmi phone, specifically the global variant. The front sees a large display with a centre-aligned punch-hole cutout for the selfie camera. The back has a curved glass panel that is glossy and reflective. There’s a square-shaped camera module on the top center that houses four camera sensors. The rear panel has a dual-tone finish with two-thirds having a pattern of slanted lines. We have seen a similar dual-tone finish on the global Redmi Note 9 Pro Tropical Green variant. The POCO M2 Pro, however, comes in ‘Out of the Blue’ and ‘Two Shades of Black’ colour options.

The Out of the Blue variant that we received for review looks good under light, but is a major fingerprint and dust magnet. You’ll be spending a lot of time cleaning the back unless you have a cover on and thankfully, you do get a silicone case in the box. 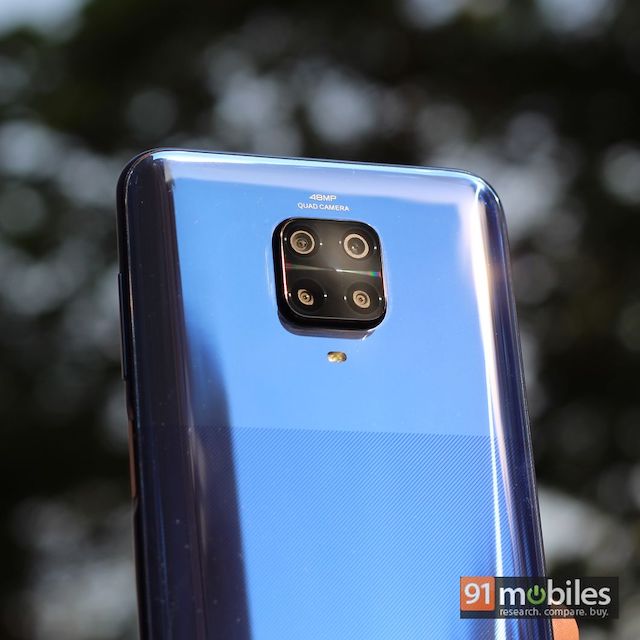 The POCO M2 Pro comes with a side-mounted fingerprint sensor. The placement of it is good, but we would have liked it to be more defined. We would often miss the fingerprint in the first attempt as the recess isn’t well defined. The button also doesn’t offer a good tactile feel when pressing it. Just above the fingerprint sensor is the volume control. There’s a triple card slot on the left side that can hold two nano SIM cards and a microSD card. The bottom holds a 3.5mm headphone jack, a Type-C port and a speaker grille. 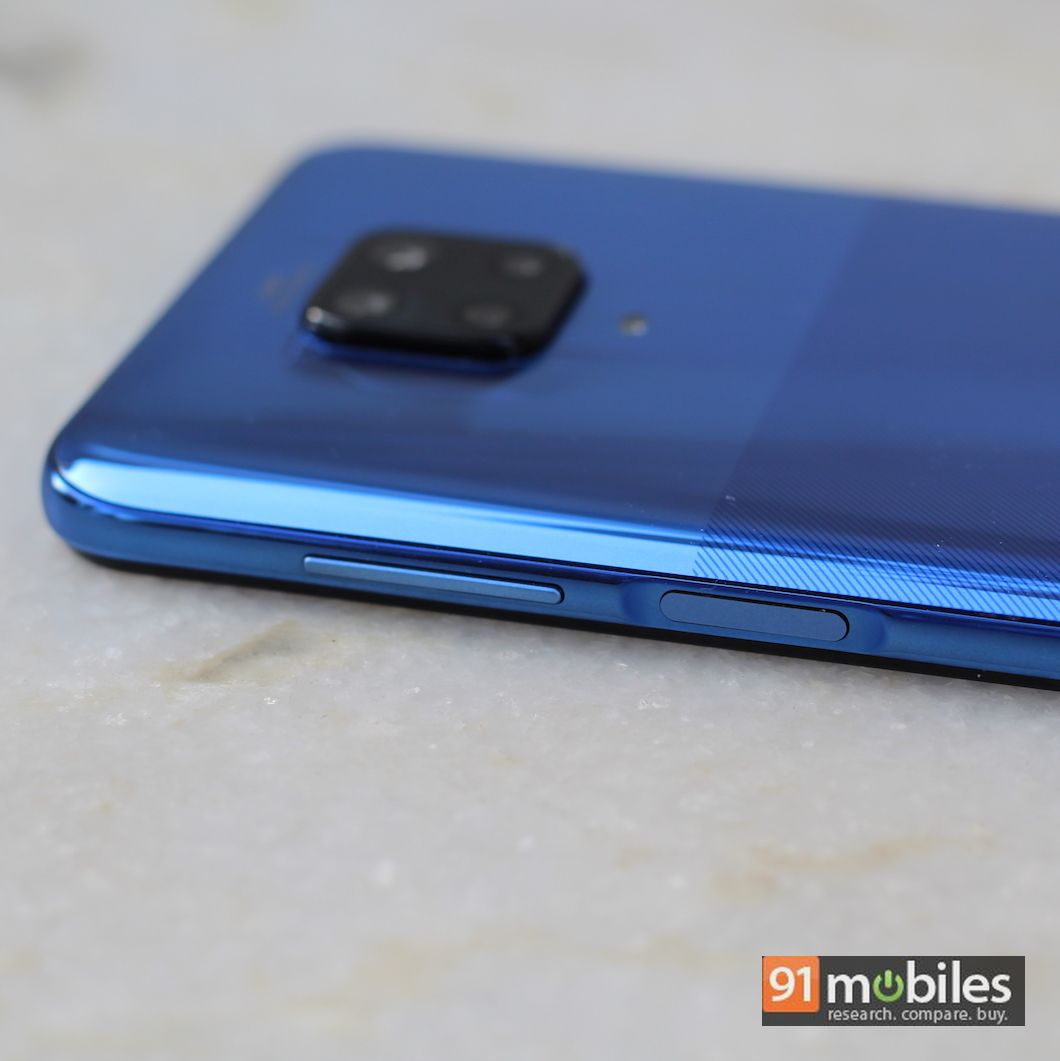 Overall, the design is quite familiar and doesn’t offer anything new or unique. However, there is no denying that it is a premium-looking phone for its price. Additionally, it also comes with a P2i coating for splash resistant, which consumers will appreciate.

Coming to the display, the POCO F2 Pro sports a 6.67-inch screen that we found to be pretty easy to use with one hand. The screen delivers full HD+ resolution and a standard 60Hz refresh rate instead of a higher 90Hz or 120Hz display. This may disappoint fans who were expecting a high refresh rate, especially since phones with high refresh rate displays do exist in this segment (such as the Realme 6 that has a 90Hz screen). 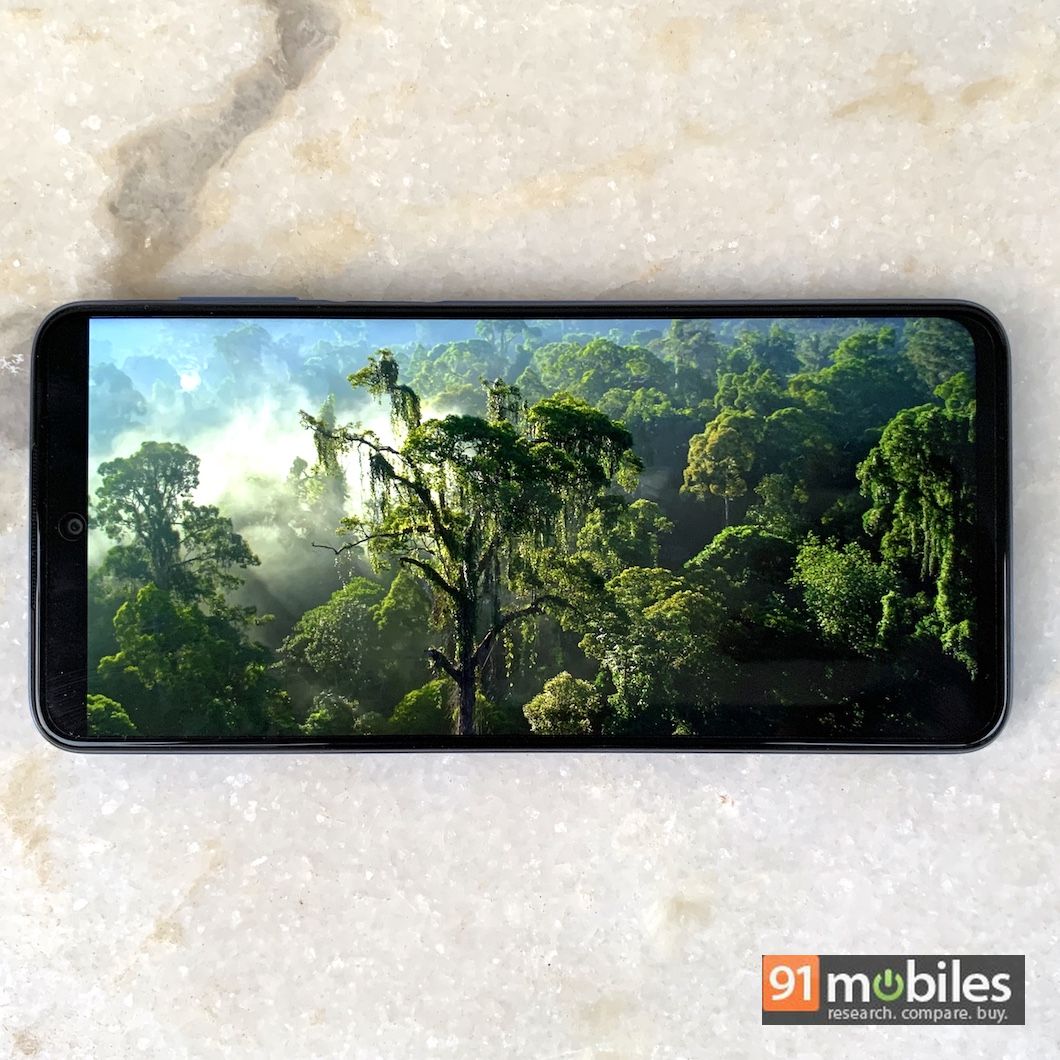 We found the display to be bright and vibrant with punchy colours that may look a little too oversaturated for some. You can adjust the colour saturation in settings. The brightness levels were good indoors but it can be a little difficult to view the display under sunlight due to the reflective nature of the screen. The punch hole can be distracting on a light-coloured background, and we feel a corner cutout would have been easier on the eyes while playing games or watching content.

The POCO M2 Pro’s display delivers good sharpness and colour reproduction while watching content in 1080p resolution. The phone comes with Widevine L1 certification, which means you’ll be able to stream content on platforms like Netflix and Amazon Prime Video in full HD resolution. We checked out Our Planet on Netflix and liked the rich colours and dynamic range.

The POCO M2 Pro also gets the exact same camera setup as the Redmi Note 9 Pro. The 48MP primary camera uses the Samsung GM2 sensor, which will get you some bright and clear photos in daylight. Colours look rich and vibrant even with Pro Colour mode disabled. With the feature enabled, colours tend to look quite saturated to the point of being unnatural at times and we rarely found the need to use it. In tricky backlit scenarios, the dynamic range impressed us. You have the ability to shoot in raw 48MP mode for better detailing, but it lacks HDR support and images typically look duller compared to the default pixel binned shots. 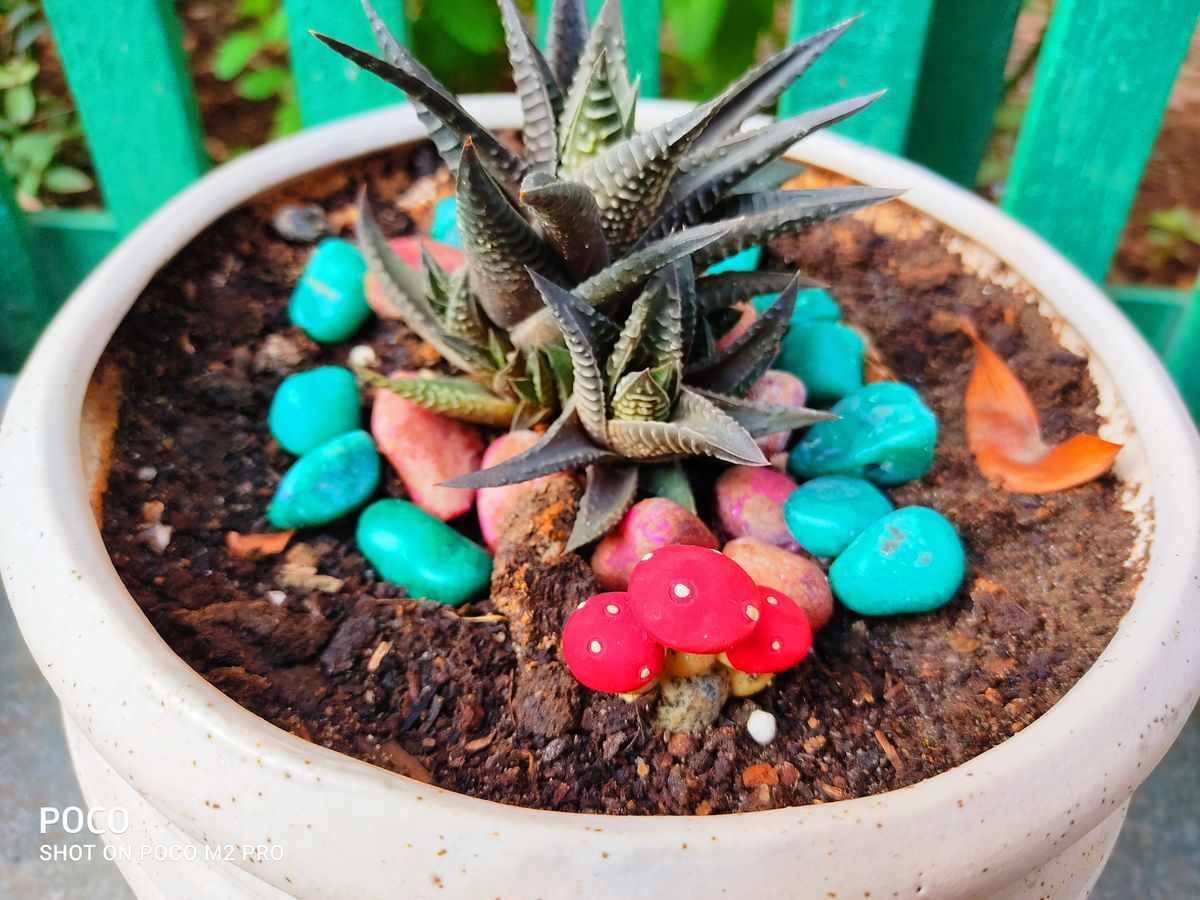 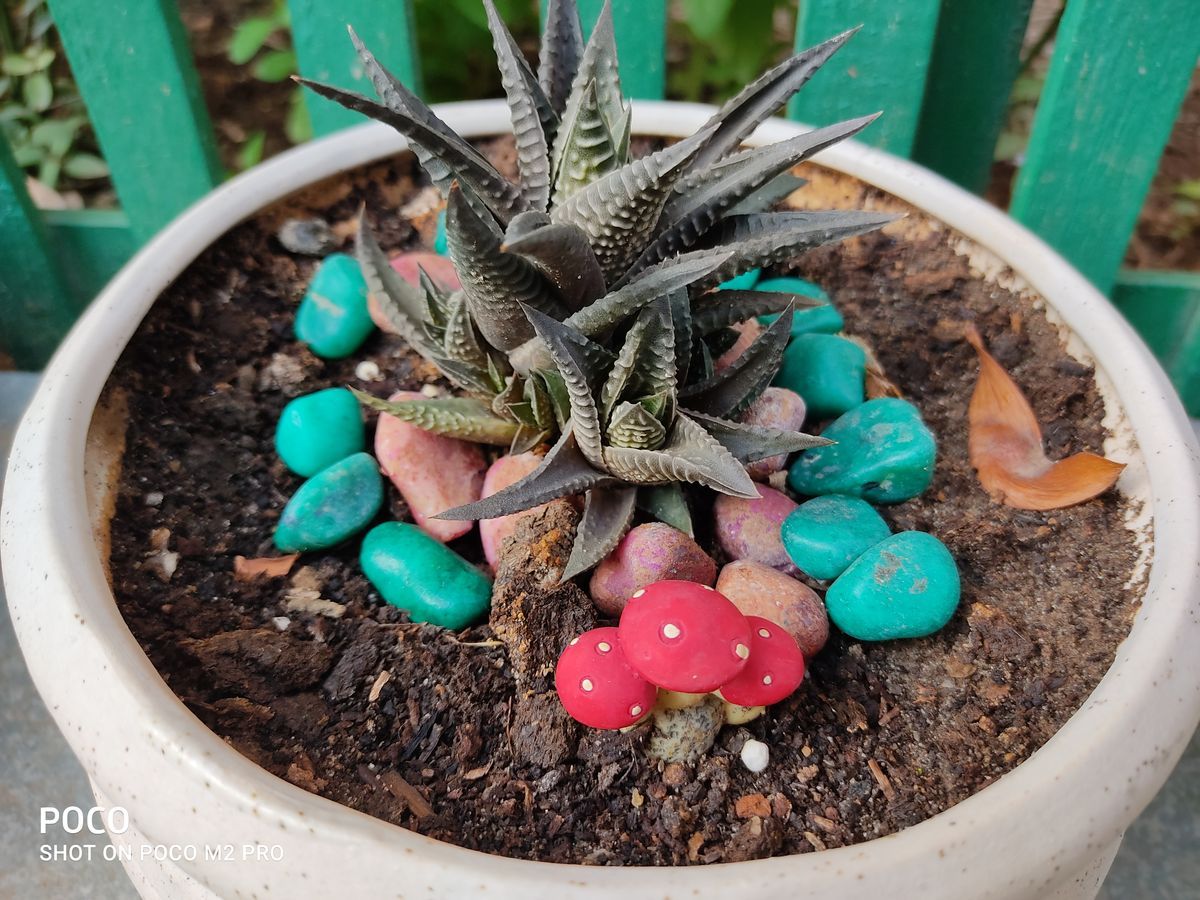 The 8MP wide-angle lens manages to keep colour tones close to what you get with the main sensor, but details take a hit. Meanwhile, the 5MP macro camera will capture some nice close up shots in daylight, but we noticed a drastic change in colour tone that made photos look washed out. 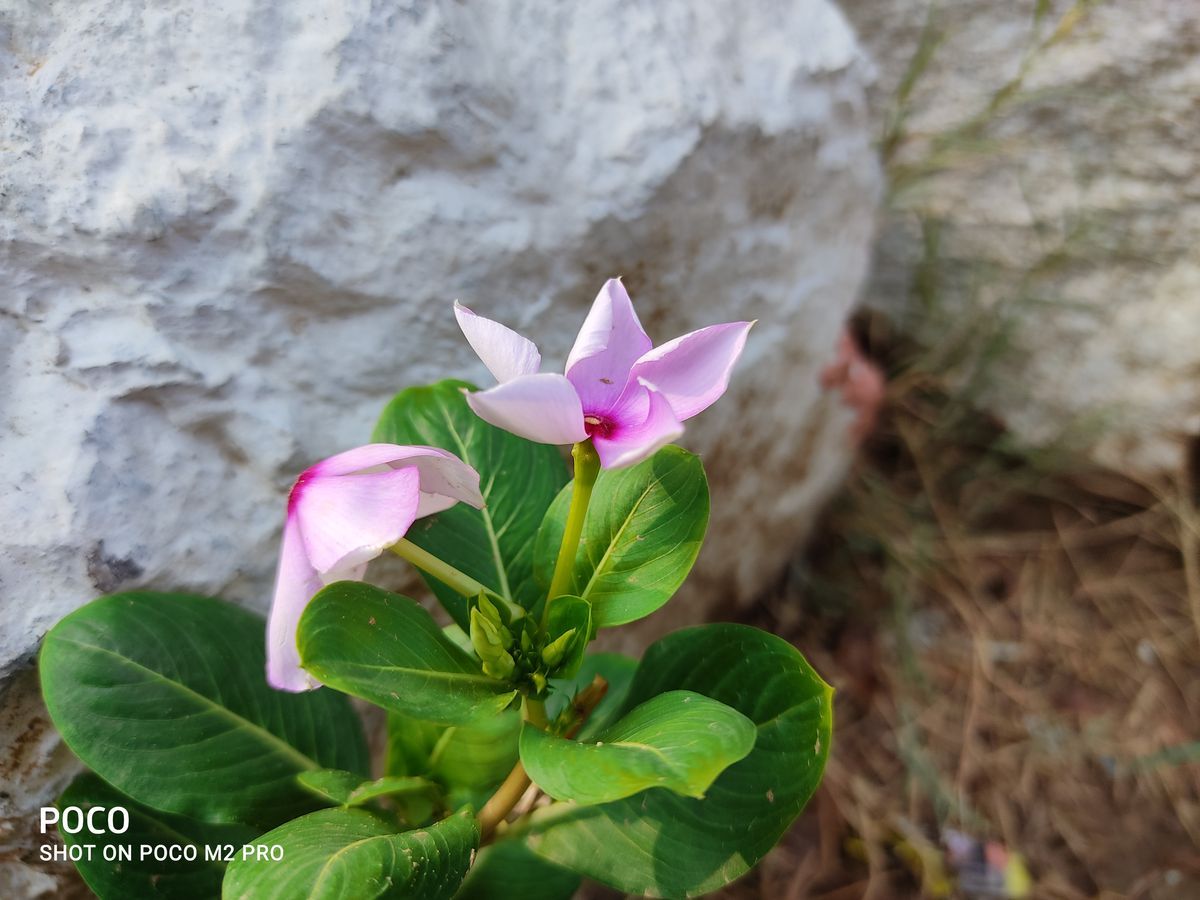 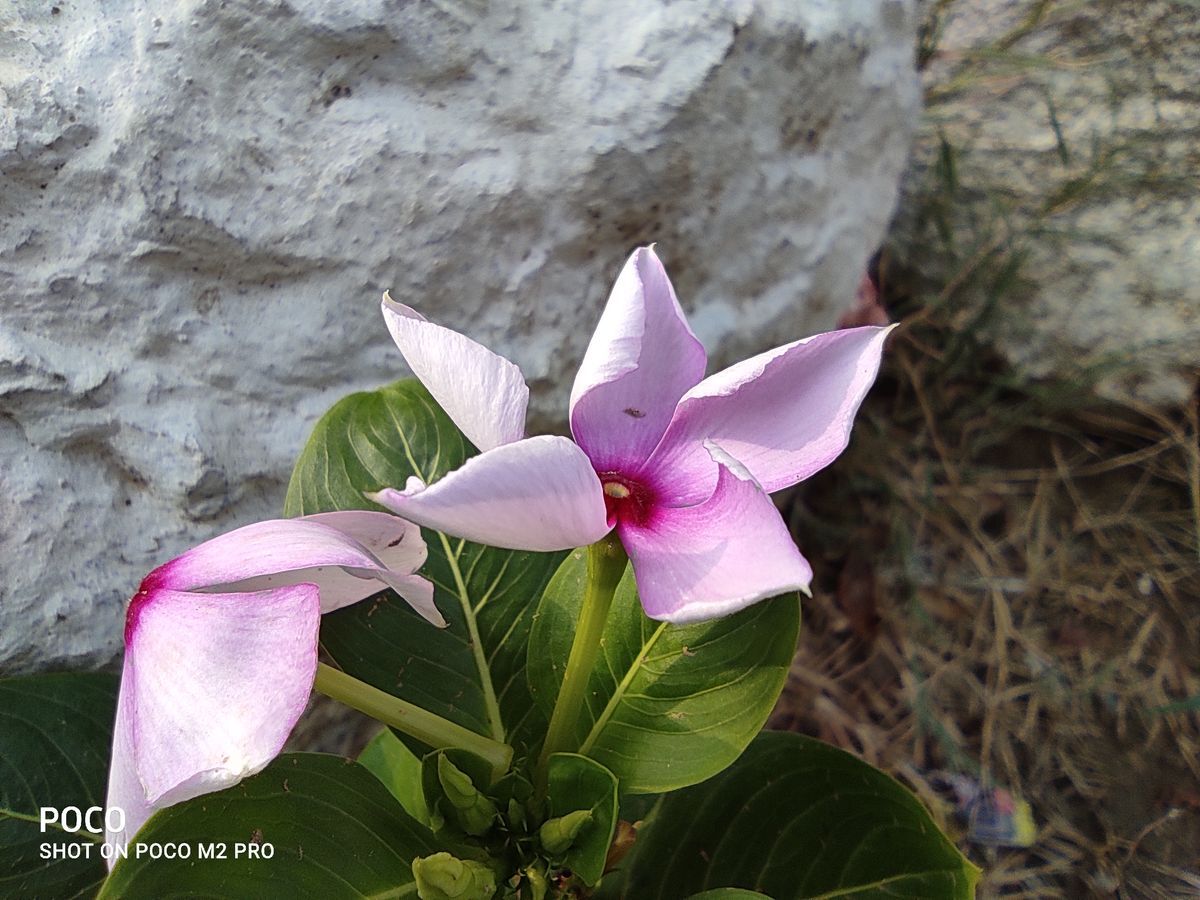 The dedicated Night mode allows you to take slightly brighter and clearer photos in low light conditions. It only works with the main camera and the results we got were about average. You shouldn’t expect dramatically brighter and sharper pictures. The feature is able to reveal some details and balance exposure, but we wouldn’t depend on this phone for low-light photography. The 16MP front camera can capture pleasing and accurate selfies in daylight provided the beauty effect is turned off. We were happy with the exposure and colour reproduction of skin tones and hair. The selfie portrait mode was also able decent bokeh shots. The front camera also supports night mode, which is supposed to capture brighter and clearer selfies in low-light, but we weren’t impressed with the results. Overall, you get a decent set of quad cameras on the POCO M2 Pro that work best in daylight and brightly lit conditions.

The POCO M2 Pro is powered by the Snapdragon 720G, which is the same processor inside the Redmi Note 9 Pro and Redmi Note 9 Pro Max. We’ve already seen how the chipset performs on the two Redmi phones and you will get the same experience on the POCO phone as well. This is a powerful processor that performs quite well in benchmarks. The phone scored 276,927 on AnTuTu and managed scores of 552 and 1807 in Geekbench 5.2.0 single-core and multi-core, respectively. 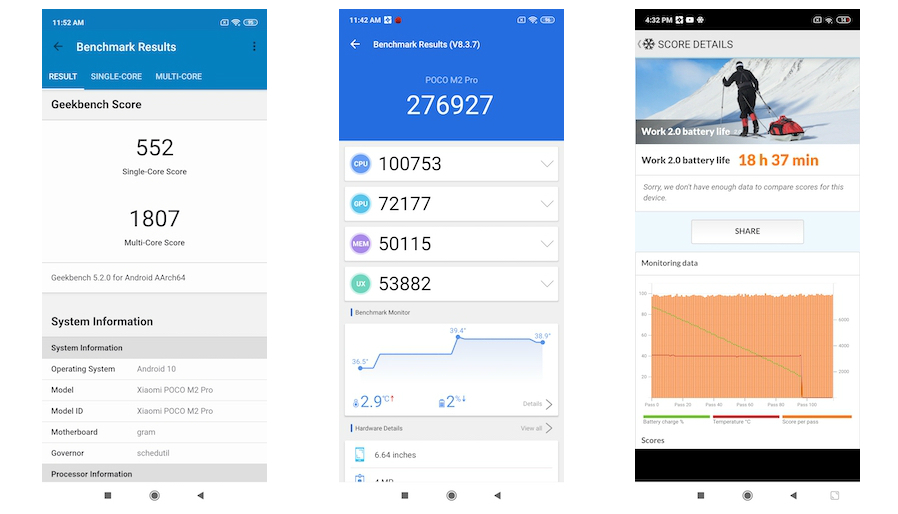 Benchmarks aside, the Snapdragon 720G is a superb mid-range processor that handles real-world day-to-day tasks with ease. The phone breezes through most apps without any hiccups and multitasking was smooth as well on the 6GB RAM variant that we received. The 4GB RAM option may show some lag if you have too many apps running in the background.

After reviewing phones with 90Hz and 120Hz refresh rates, the POCO M2 Pro does feel sluggish when scrolling through apps like Instagram and Twitter. You won’t feel this if you’ve never used a high refresh rate display, but we feel POCO could have offered a 90Hz screen to set the phone apart from its Redmi counterpart. 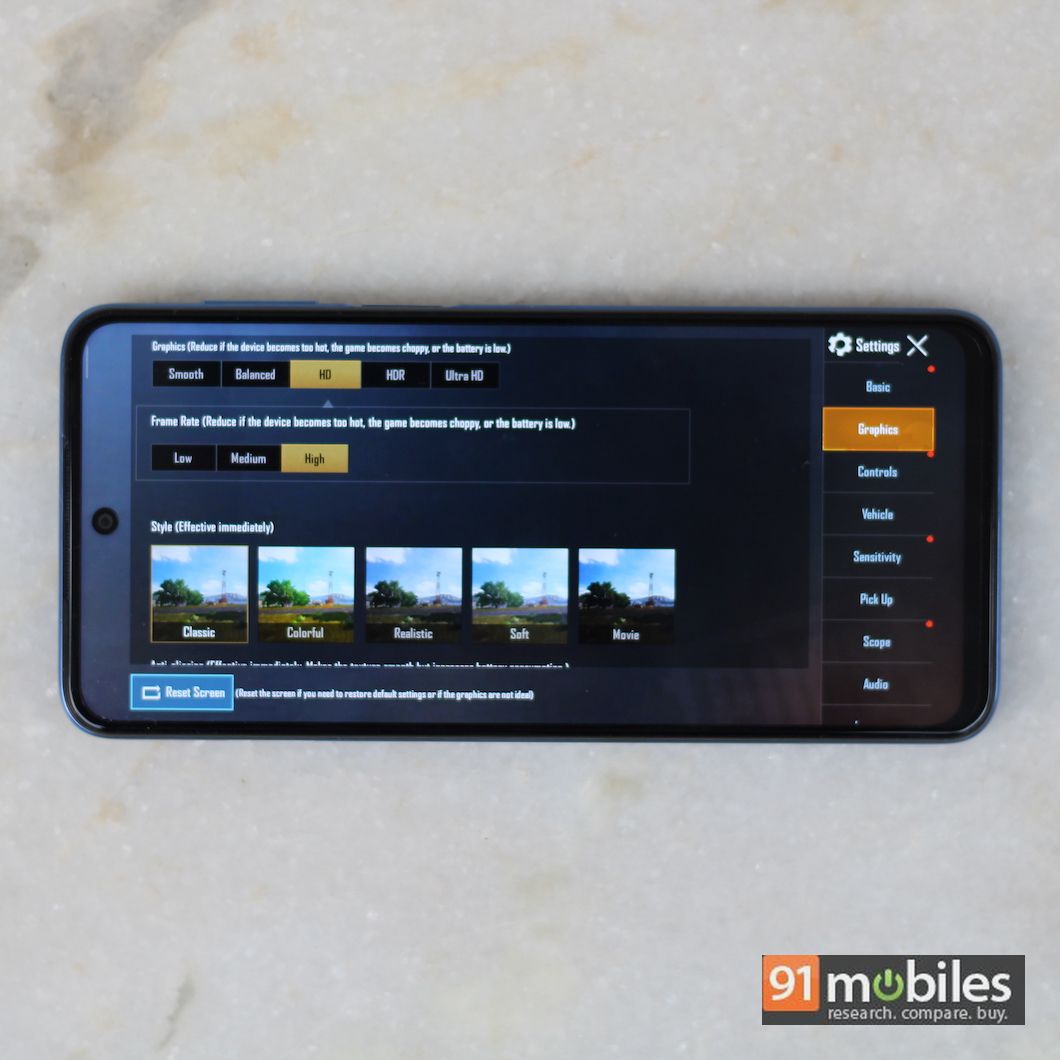 The Snapdragon 720G handles graphic-intensive games quite well. It can run PUBG on HD + High graphics settings, which looks pretty good. Throughout a 30-minute session, we did not notice any stutters and the touch response was good. The phone gets slightly warm during gaming, but it ever got uncomfortable to hold. After a half an hour session, the battery dropped by 6 to 7 percent, which is pretty decent. 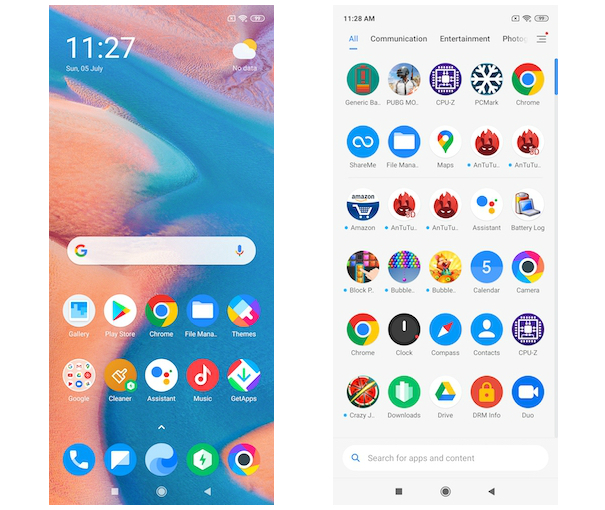 The POCO M2 Pro ships with Android 10 with MIUI 11 on top. It also gets the POCO launcher, which is quite popular among fans mainly because it offers an app drawer which MIUI 11 otherwise does not. Some pre-loaded apps do show ads, but they weren’t as pervasive as we’re used to seeing on MIUI. There are a bunch of third-party apps such as LinkedIn and Xiaomi’s own Mi Credit and Mi Pay. Helo is still present, but it won’t work as it has been banned in India. Additionally, there are a few redundant apps as well, including Xiaomi’s own app store, calendar etc.

Talking about some other aspects about the phone, we found that the single bottom-firing speaker to be quite poor while watching movies and shows on Netflix and other streaming platforms. Even at its max volume level, the speaker is just not loud and we were unable to hear the dialogues even in the confines of our room with the air-conditioning on. So, while we enjoyed the visuals of shows like Our Planet, the poor-sounding speakers ruined our experience. The side fingerprint sensor is reliable and quick and we never really found ourselves using the face unlock. The POCO M2 Pro was able to consistently latch on to a network and we did not encounter any drops in connectivity while playing games nor did we experience any call drops.

The POCO M2 Pro houses a 5,000mAh battery, which is only marginally smaller than the 5,020mAh on the Redmi Note 9 Pro. It delivers a solid day and a half worth of battery life on a single charge with typical usage. By “typical” we mean general messaging, a few hours of social media browsing and watching some content on YouTube. With more intensive usage that involves playing a few hours of graphic-intensive games, the phone will last a full day before needing to be charged. In our PCMark battery drain test, the phone lasted 18 hours and 37 minutes, which is a pretty solid result. 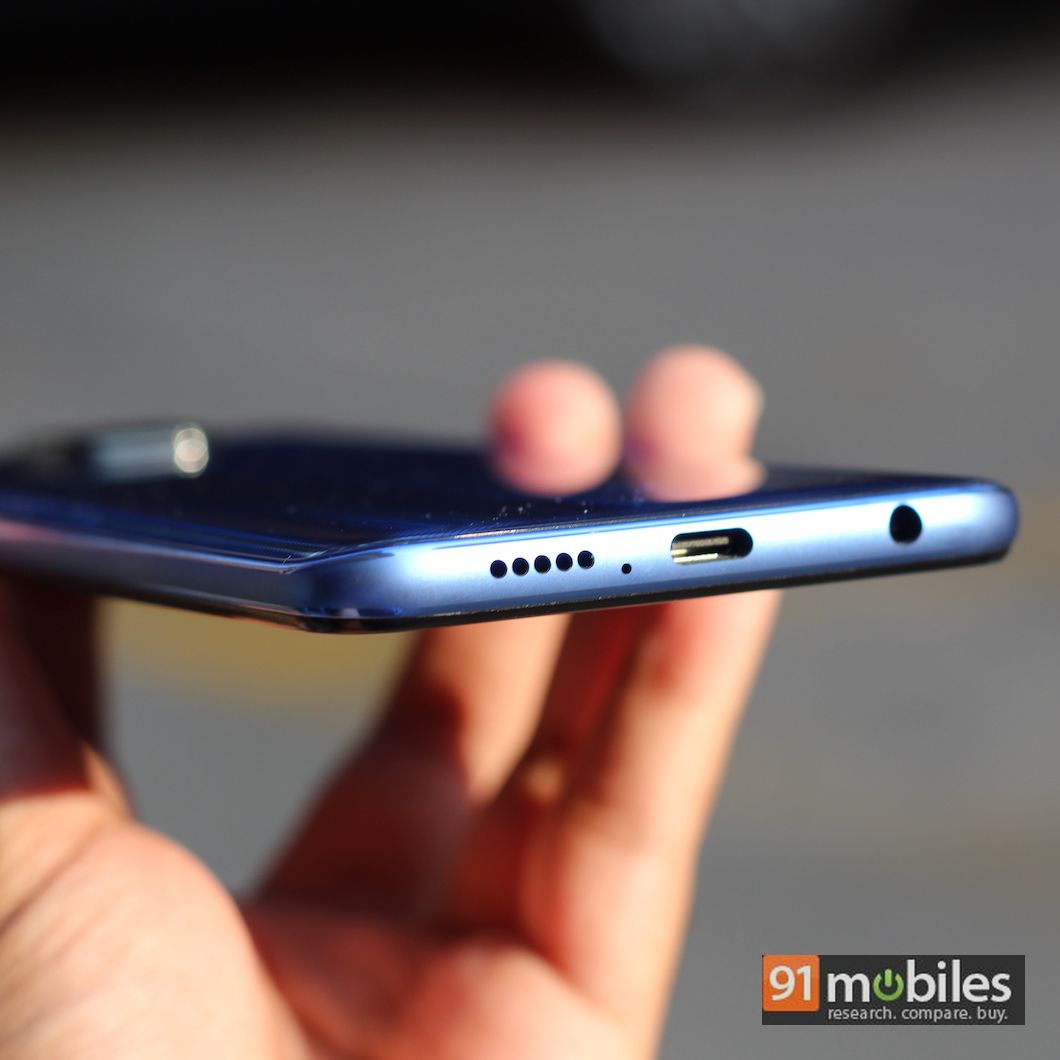 POCO M2 Pro supports 33W fast charging, which is the only feature that is different from the Redmi Note 9 Pro as the latter supports 18W fast charging. The POCO M2 Pro comes with a 33W charger in the box that charges the phone from from zero to 100 percent in about 85 minutes, which is considerably faster than the time it takes for the Redmi Note 9 Pro to fully charge.

The POCO F1 was successful as there was no other phone like it in its segment back in 2018. The POCO X2 was also able to shine because Xiaomi did not launch the Redmi K30 in India. But the POCO M2 Pro comes at a time when the Redmi Note 9 Pro  (Review) and Note 9 Pro Max already exist in the Indian market. This is why the POCO M2 Pro does not look unique nor does it feel like it’s bringing anything new to the table. The POCO M2 Pro obviously competes against the Redmi Note 9 Pro and the only edge the former has over the latter is a faster charging support. The Realme 6 (review), which offers a higher refresh rate and better cameras, is also worth considering.

All said and done, the POCO M2 Pro might not have a distinct identity of its own, but it does have quite a few things going for it. The fast charging support is a plus point as is the POCO launcher. Overall, it’s a solid budget smartphone that will impress you with its performance, premium design, and display.