The Realme 10 Pro+, a new addition to the brand’s signature number series, has been officially launched in India. It seems clear from the smartphone’s starting price of Rs 24,999 that the lineup has taken a departure from its budget roots and ventured into the realm of mid-range handsets. The 10 Pro+ does offer a set of enticing specs and is the first phone in the country to be powered by the MediaTek Dimensity 1080 SoC. Branded as a near flagship experience packaged in an affordable price tag, it’s time to find out if the Realme 10 Pro+ really comes as advertised via this full review. 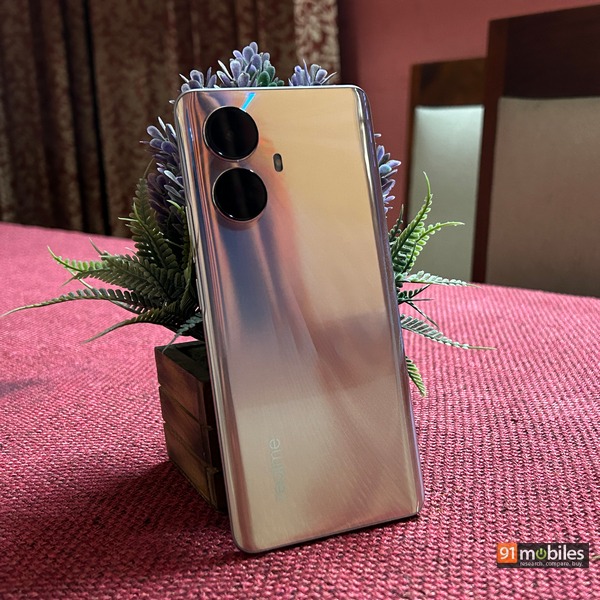 Just from a design and display perspective, the Realme 10 Pro+ shatters the boundaries of what a mid-range smartphone experience should be like. The phone is also supported by a more than decent primary camera and harbours latent low-light photography capabilities. Holding it down is the ultra-wide shooter and a bloatware-laden UI, but if one was to put those aside, the Realme 10 Pro+ shapes up to be a compelling offering under Rs 30,000. 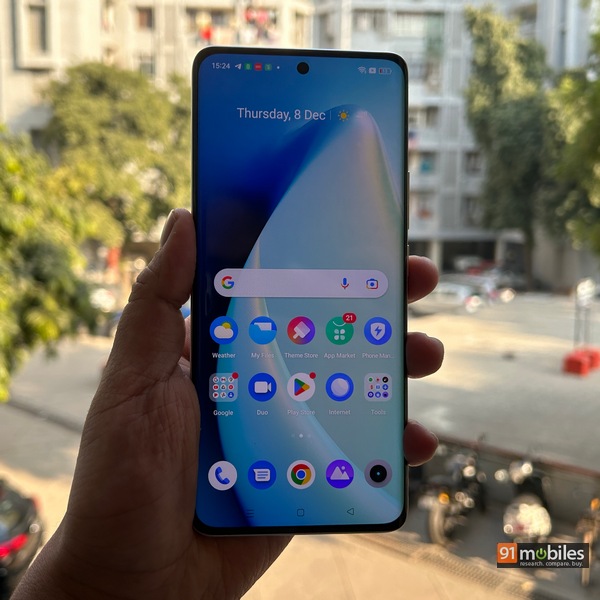 The Realme 10 Pro+ certainly does turn a few heads with its design language. While I’m not really a fan of the Hyperspace colour variant’s glittering glossy back, I do appreciate the patterns emanating from the camera lens when looked at from different angles. Also with a weight of just 173g and a thickness of less than 7.8mm, the device is one of the thinnest and lightest smartphones on the market. This fact is further accentuated when you realise the Realme 10 Pro+ also houses a 5,000mAh battery on the inside. The volume rocker and power buttons on the side are quite slim and follow the general outlook of the device. Other elements include a USB Type-C port, a speaker grille, and a dual-SIM slot at the bottom. 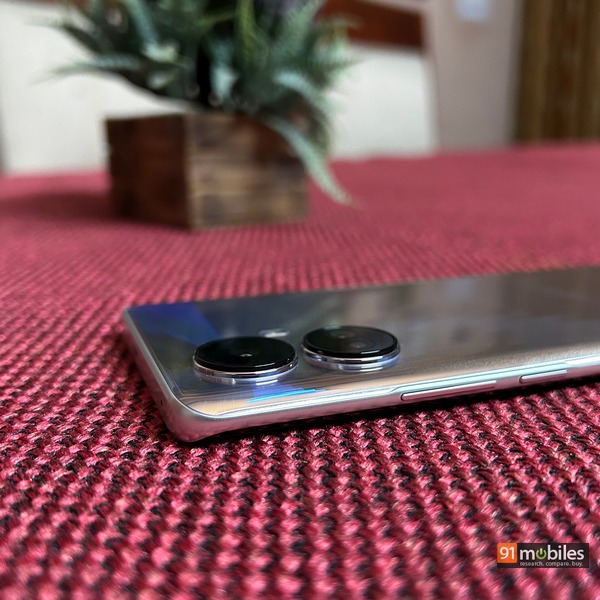 The phone has a stereo sound setup with the earpiece facilitating this functionality. There is no distinct camera housing to enclose the 10 Pro+’s optical setup, but instead, two massive rings jut out from the back, creating a false impression about the size of the sensors. Even so, the entire phone has a svelte look to it and is quite pleasing to use aesthetically.

Coming now to the Realme 10 Pro+ display, and I have to say that the company has not disappointed at all. The front of the device sees a curved AMOLED panel, a first in this segment, adding to the phone’s premium look. Also, the display is capable of refreshing at 120Hz, which is always nice to see and offers FHD+ resolution. Realme has tried to maximise the screen real estate without increasing the device’s footprint, resulting in extremely slim bezels. 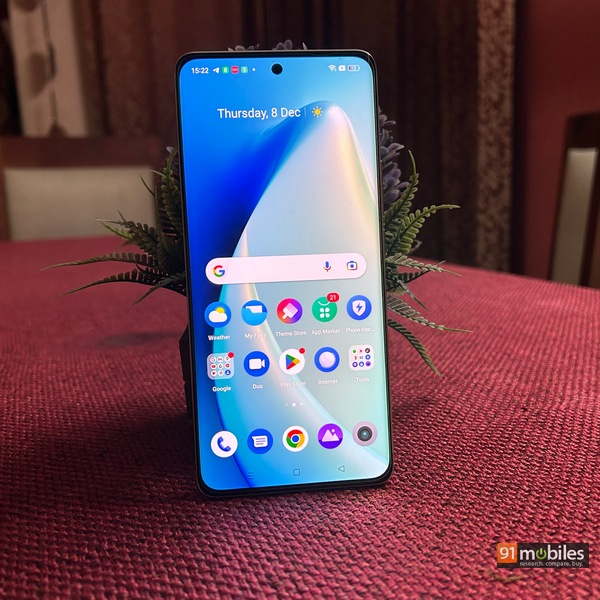 The screen itself is tuned for your viewing pleasure with features like HDR10+ certification, 5,000,000:1 contrast ratio, and 950 nits of peak brightness. I binged Netflix’s 1899 on the device and was quite enthralled by the detail, dynamic range, and accurate colours on offer. Suffice it to say, the Realme 10 Pro+’s display is one of its strongest suits. There are also a few industry-first traits that Realme has bragged about on the device.

The first is a 2160Hz PWM dimming mode that supposedly maintains more accurate colours at lower brightness levels. Quantitatively, I can provide no metric to measure this but I can say that at night, I find the Realme 10 Pro+ quite easy to use without being a burden on my eyes. The second is an X-touch Anti-mistouch Algorithm which, in the company’s own words, has been intelligently optimised to reduce mistouches across the panel. A curved screen does introduce accidental touches but during my usage of the Realme 10 Pro+, they were quite minimal.

At the back, the Realme 10 Pro+ sports a triple-lens setup with the primary shooter having a 108MP sensor. This is supported by an 8MP ultra-wide and 2MP macro shooter, while up front is a 16MP selfie camera. I have already talked in detail about the 10 Pro+’s camera performance in a comparison with the iQOO Z6 Pro (review). You can read about it in the link below but the overall gist is that I was quite impressed with Realme’s image-taking capabilities.

Daylight shots are handled well by the sensor and most phones in the mid-range segment can pull off a good shot in those conditions. The Realme 10 Pro+ is no different with crisp and detailed photos on offer but there is some highlight clipping in very sunny conditions. Dynamic range remains optimum and I was surprised at how well the phone replicated real-life colours. Focusing and shutter speeds were never an issue on the device and I also liked the exposure control on the primary shooter. The ultra-wide sensor remained a bit spotty in terms of detailing. It also favours a much warmer colour tone and doesn’t compensate very well for sunlight. On the positive side, there is very minimal warping around the edges, a drawback prevalent on several competing phones. As for the macro shooter, you can take halfway decent shots that get in good colours and details but with 2MP resolution, the image can only look satisfactory on a mobile screen. 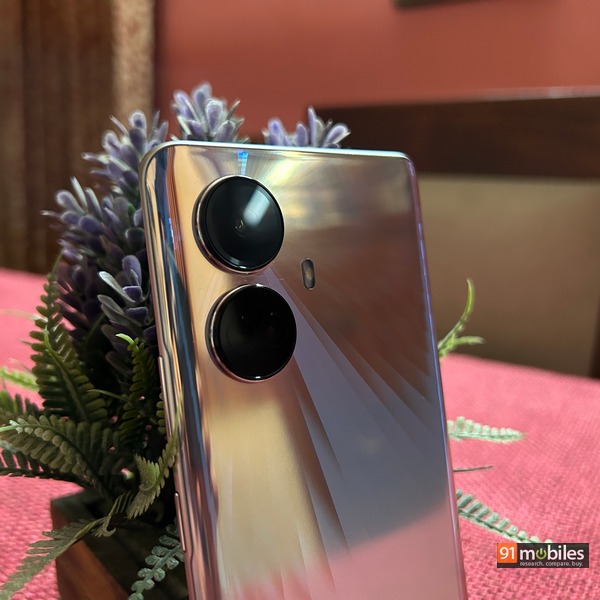 The night photography capabilities on the device certainly impressed me a lot. Most of my shots were in the presence of ambient lighting around the subject but the phone’s final output looked quite appealing. The extra exposure was adjusted, the colours maintained, the lens flare reduced and details not overprocessed. These qualities were amplified with the dedicated Night mode which also added more details in the shadows. Finally for the selfie camera, facial oversharpening remained an issue but apart from that, the device churned out respectable shots.

Running under the hood is MediaTek’s Dimensity 1080 SoC which is based on a 6nm manufacturing process. Technically the chipset is only a slight bump up from the Dimensity 1000 present on devices last year, but it still makes for a reasonably good processing powerhouse. I ran several benchmarks to gauge its ability and also how well it performed under sustained load. On Antutu the device delivered an overall score of 514,042 while Geekbench 5’s multi-core result is 2,370. 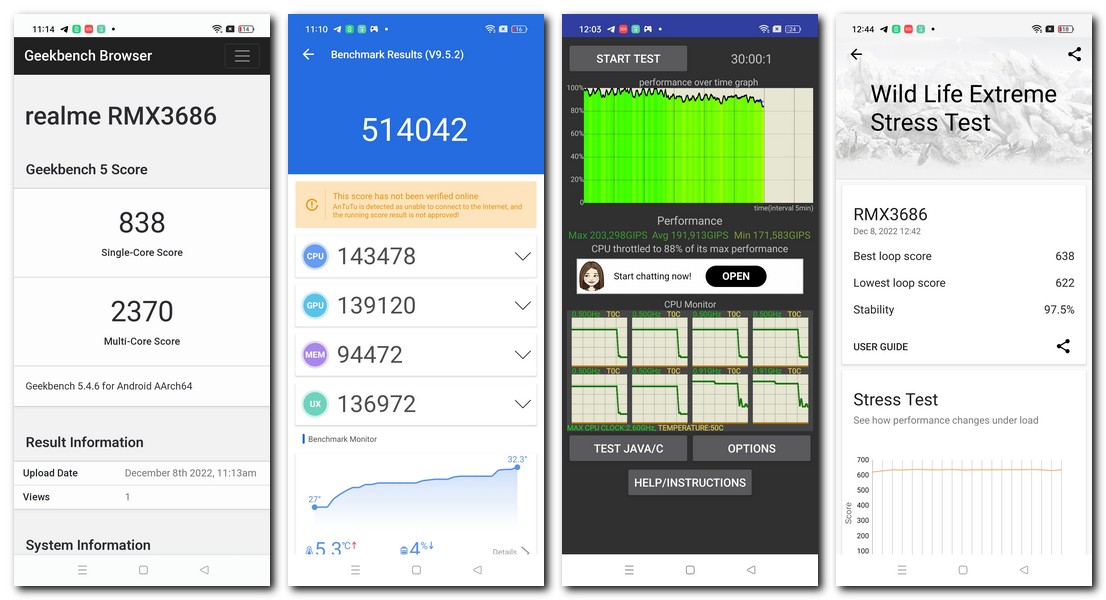 Now these results are not the best in the segment, but for regular users, the Realme 10 Pro+ packs more than enough grunt. Also, the device maintains an impressive 88 percent of its peak performance under sustained loads, which is a big plus in my book. For gaming, I ran PUBG: New State and the title ran at 60fps at Ultra graphics without any major stuttering after prolonged usage. I would, however, lower the graphics for a more seamless experience. The phone also has up to 8GB of LPDDR4X RAM with an additional 8GB available via virtual swap memory with the 256GB of UFS 2.1 internal storage. 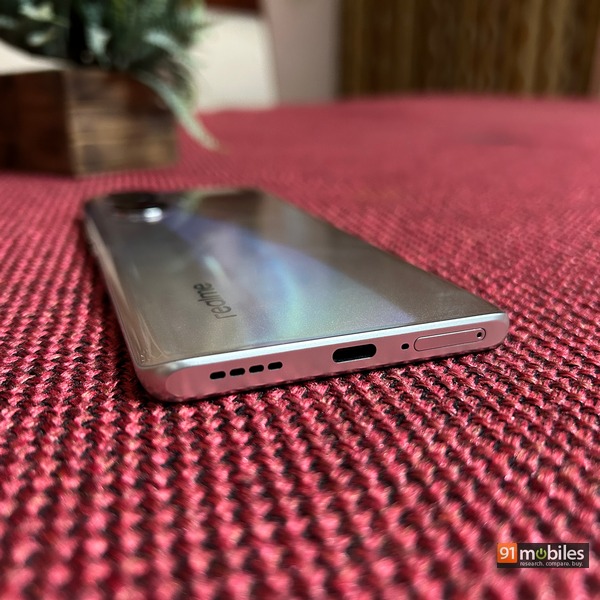 Coming to some of the other features on the device, there is an in-display fingerprint sensor that works as advertised. 5G capabilities are present on the device with support for both SA and NSA bands whenever the service becomes available in your city. I also like how good the stereo speakers sound especially the depth being offered in the audio while not crackling at higher volumes. 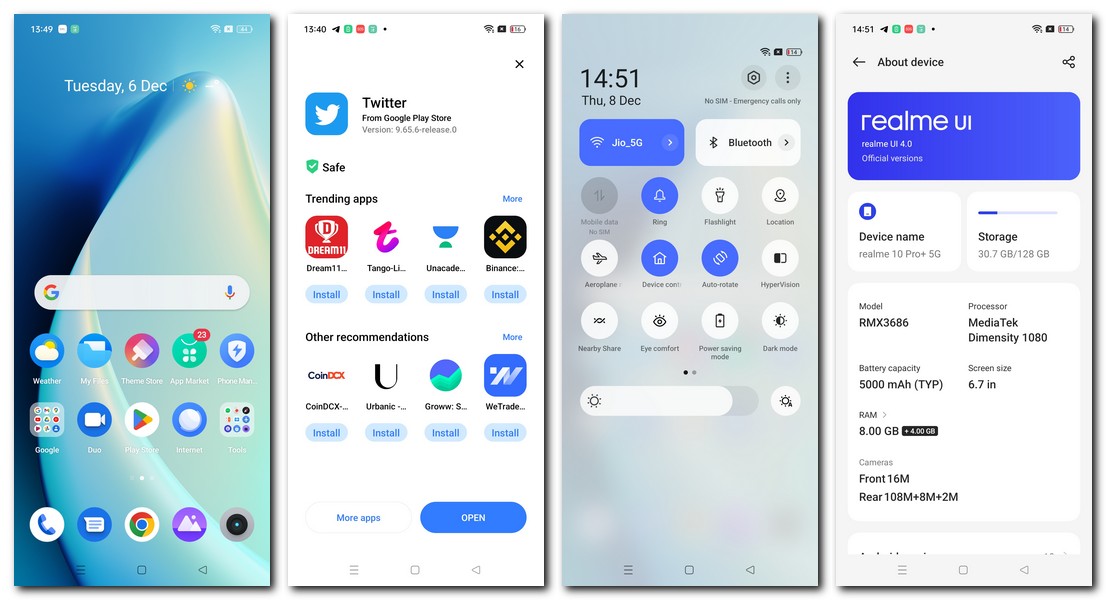 RealmeUI 4.0, based on Android 13, is running on the device, making it the first Realme phone to run the latest Android version out of the box. Most UI elements are not unlike Android 12 such as the drop-down menu and quick settings. However, there are a few additions like audio control and recommendation on the always-on display while playing from Spotify. The interface is not exactly clean, with a ton of Realme apps populating the home screen and app drawer. There is also an annoying window which pops up every time you download an app and recommends similar or trending apps like it. Other than that, RealmeUI 4.0 is intuitive, customisable and relatively easy to use. 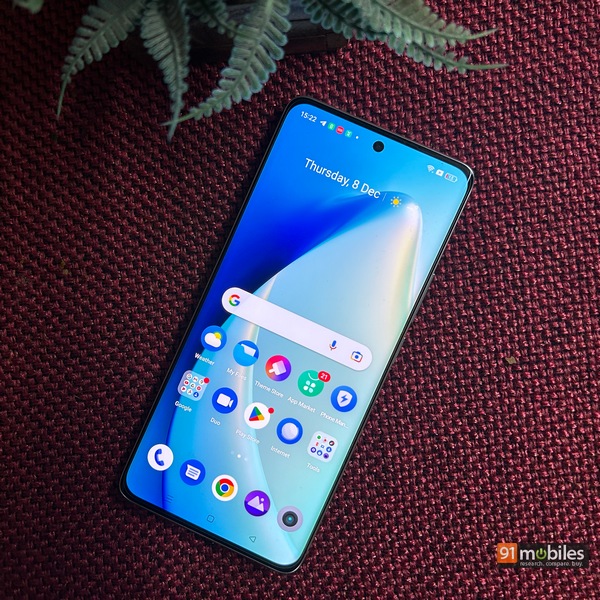 The phone comes with a 5,000mAh battery housed inside that super-slim chassis. In terms of usage, I got around six hours out of the Realme 10 Pro+ and this included nearly three hours of Netflix and about an hour of PUBG: New State. I can safely say that the device will easily last you the full day and then some with moderate usage such as using social media and Chrome browsing. However, if you do require an early top-up, the 67W charging facility has got your back. It can juice up the phone from 0 to 100 percent in less than 45 minutes.

I think that within this price bracket of Rs 20,000 to Rs 30,000, no other phone captures the imagination like the Realme 10 Pro+. Aspects like the curved AMOLED screen definitely punch above the device’s weight. I also enjoy how it feels in the hand, like an elegant piece of hardware not normally associated with anything in the mid-range category. 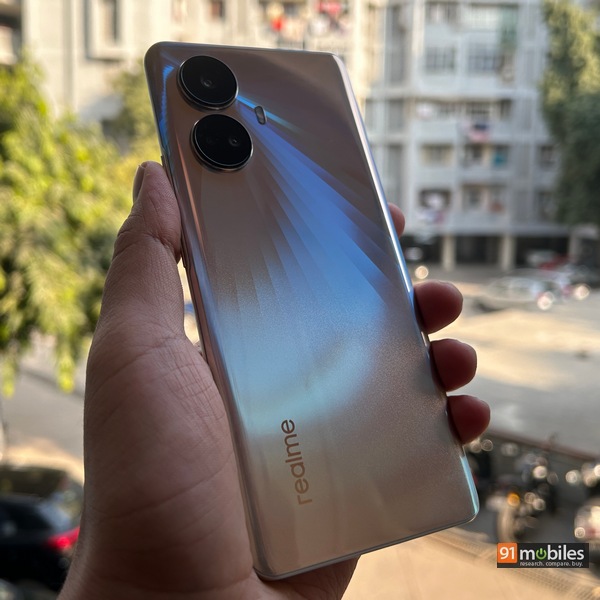 Does it have a few flaws? Of course. No device is perfect and I feel that Realme could’ve utilised a better ultra-wide shooter and made the UI cleaner. Hardcore performance enthusiasts will obviously find more solace in options like the Redmi K50i (review). However, as an overall device, the Realme 10 Pro+ really offers a holistic smartphone experience which will not disappoint its target audience.