Realme has been a strong and noteworthy player in India’s smartphone market for a while now and more recently it has started to penetrate the affordable TWS (truly wireless earphones) segment as well. Under its belt is a bevvy of quality audio products that have started to make an impact on the country’s audio market. While Boat, according to last year’s Counterpoint report, continues to be the market leader in terms of TWS shipments, Realme’s Air Buds series is likely to give the company a run for its money. The latest from the former OPPO sub-brand’s stable are the Realme Air Buds 3, priced very competitively at Rs 3,999. They come with ANC (active noise cancellation) and are rated for up to 30 hours of music playback on a full charge. Let’s find out in this review if the Buds Air 3 are the budget TWS for you. 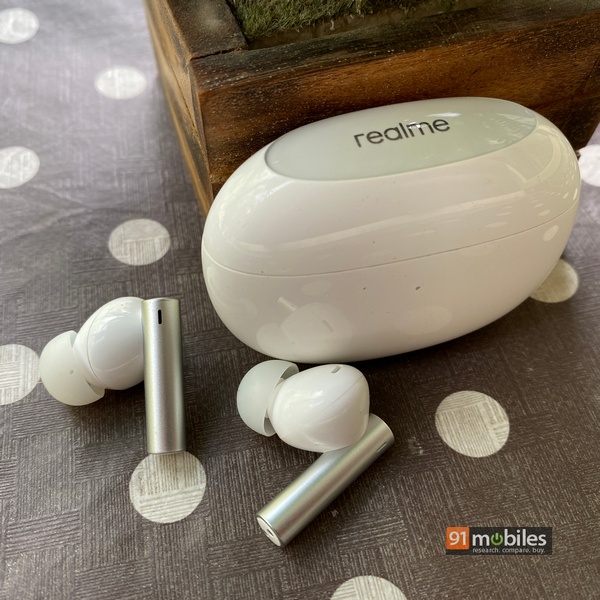 The Buds Air 3 definitely have a plain look to them with a glossy white finish across the case and a transparent plastic top through which the Realme branding is clearly visible. Construction-wise, the device has a robust build with the lid on the case opening quite smoothly and slamming firmly shut via magnets. However, the case happens to be extremely susceptible to scratches. The dimensions are not particularly big but you will have a bit of a problem placing it in a tight jeans pocket. On the bottom, a USB C port is present for charging purposes and a single physical button is on the side to help with the pairing process. The earbuds’ stems are coated in a metallic finish which provides a rather unique look. Each earbud comes with a silicon ear tip pre-installed and if they don’t fit properly, Realme is gracious enough to provide three more sets that should seal the deal. I took the Buds Air 3 out for a jog, perfectly positioned in my ear canal, and even a violent shake of my head was not enough to dislodge the buds. 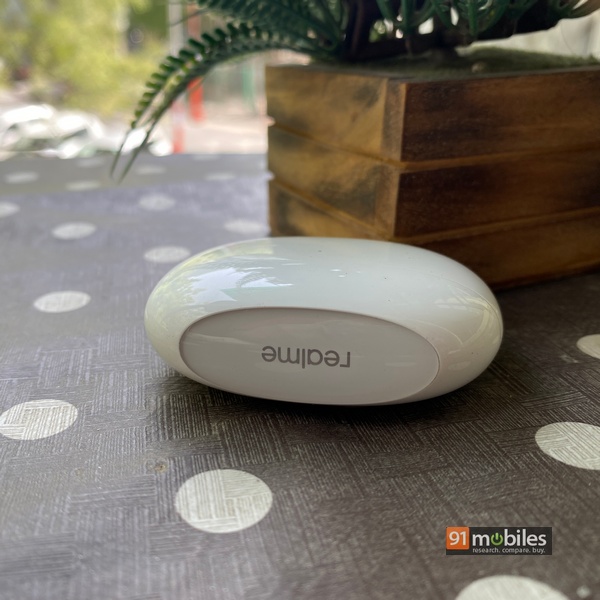 In terms of features, the earbuds have motion sensors that sense when either of the earbuds are removed and pause the media playing on your paired device. There are also capacitive controls on the earbuds wherein two taps pause music/reject incoming calls, three taps play the next/previous song, and a long press on either earbud cycles between ANC, and transparency mode. However, the controls are quite hard to execute and sometimes don’t work altogether. The Air Buds 3 are also IPX5 water-resistant and can be used during sweaty workouts or light rain. The Realme Link app is loaded with a variety of customisation options for the earbuds. For starters, the pairing process is extremely easy with only a three-second hold required on the case’s physical button and the app automatically detects the earbuds. Inside the app are options for ANC control, Dolby Atmos, EQ customisation, Earbud fit test, and more. I do like the Custom Audio tuning feature which effectively optimises the sound quality according to your hearing capabilities. Apart from that the app also displays the battery levels in each earbud and also allows you to connect to two devices simultaneously. Lastly, the TWS has something called Game mode which, when enabled, provided up to 88ms of latency for a near-zero lag between audio and video. 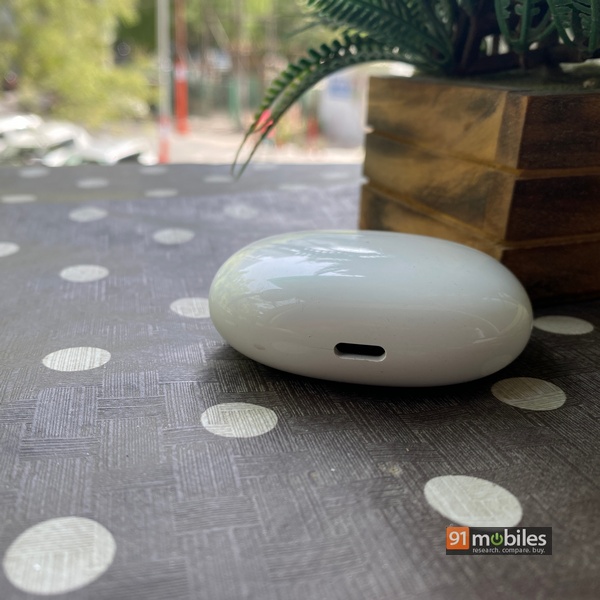 For their asking price of Rs 3,999, the Realme Buds Air 3 sound quite good, which is saying something since the previous iteration of the device were already considered the best in the business, at least in the budget segment. The ANC provided by the earbuds surprised me with how the ambient noise outside was muffled effortlessly. Of course, the quality of the noise cancellation should be considered in line with the price of the product. Nonetheless, both the transparency and ANC modes are more than adequate for my daily needs. Inside the buds are 10mm Dynamic Bass Boost drivers which amplify the lows on the earbuds adding a touch of depth to the audio being consumed. There’s a separate Base Boost setting option inside the Realme Link app which pumps up the bass while distortions of vocals and beats were minimal. I prefer listening to a lot of EDM and Techno music for which the Air Buds 3 were quite optimum with pronounced highs. Of course, any audiophile will be able to dissect the narrow soundstage and sub-par instrument separation while playing classic rock songs. However, for the average consumer of this product, the audio quality is going to be more than sufficient. 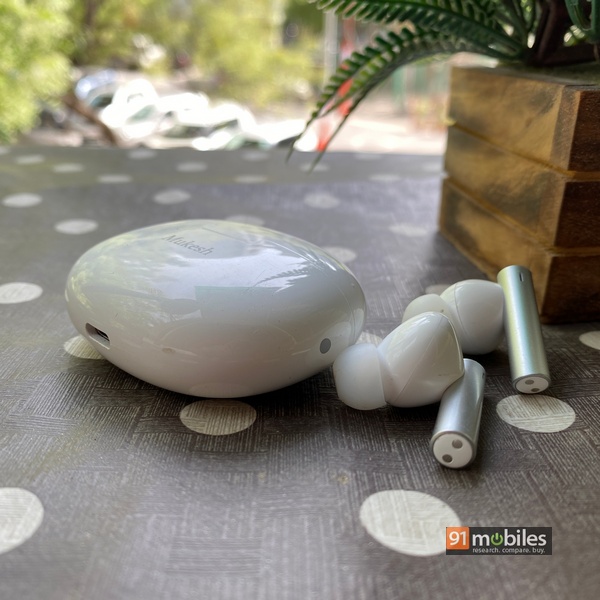 As for the battery life, Realme has said that the case along with the earbuds can provide up to 30 hours of music playback time. However, with ANC on for most of my review period, I got somewhere around 18-20 hours out of the Buds Air 3. During the week I have had to charge the device only once after about 2-3 hours of usage every day, which is definitely saying something in the TWS space. 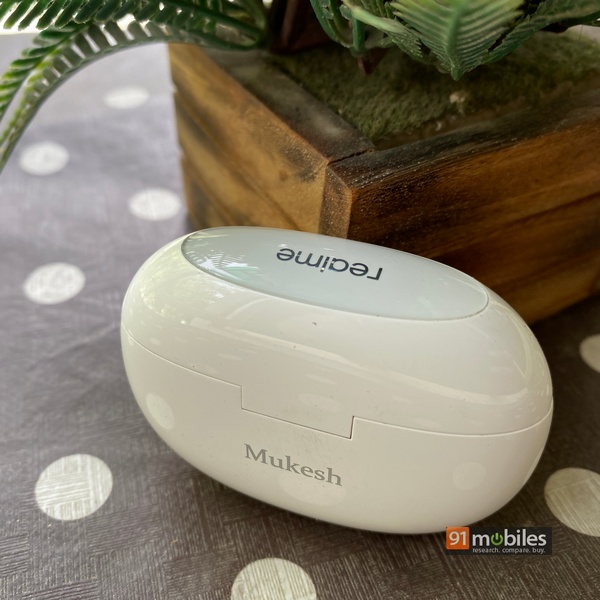 It’s easy to recommend the Realme Air Buds 3 to users who are on a tight budget, are not super concerned about audio quality, and want a sturdy pair of earbuds that also accomplish decent noise cancellation. There are a few other products that also stand out in this price range, namely the Jabra Elite 2 and the Noise Air Buds Pro, but neither have the Air Buds 3’s long battery life even with ANC on. For users that like working out, and like just enough noise cancellation to drown out the wind while not having to worry about charging every now and then, the Realme Air Buds 3 are a great option.