91mobiles.com
Home Mobiles Realme Narzo 50 review: a decent daily driver for those on a... 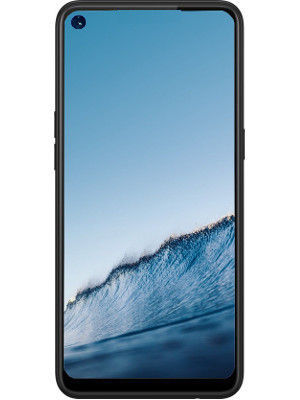 Realme appears to be continuing its strategy from last year by bombarding the Indian smartphone space with new launches at short intervals. The company has already unveiled three smartphones under the Realme 9 series this year so far, and we’re barely into March. Now we are going to see a new device as part of the budget Narzo lineup. I remember reviewing the Realme Narzo 50a (review) back in September of last year and after a gap of nearly 5 months, the former OPPO sub-brand is making additions to the series. I have with me the Realme Narzo 50 which is priced starting at Rs 12,999 for the base 4GB RAM + 64GB storage variant. The overlapping of Realme’s signature number and Narzo series’ is nothing new, so it falls upon us reviewers to differentiate the two product lineups on the basis of value for money. Is it wise to spend money on the Narzo 50 or are there better alternatives from the stables of Xiaomi, POCO, and even Realme itself? I will try and answer these questions in this full review of the device. 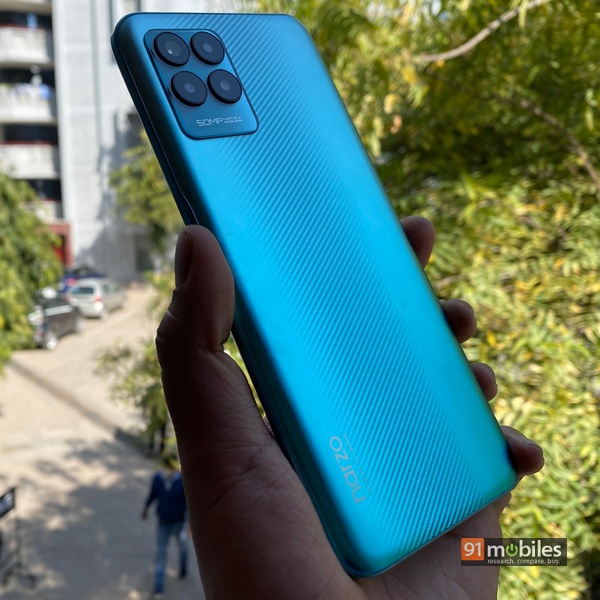 The Narzo 50 is priced well according to the specs on offer. It misses out on an OLED panel and an ultra-wide shooter but it makes up with its capable performance and relatively user-friendly software experience. 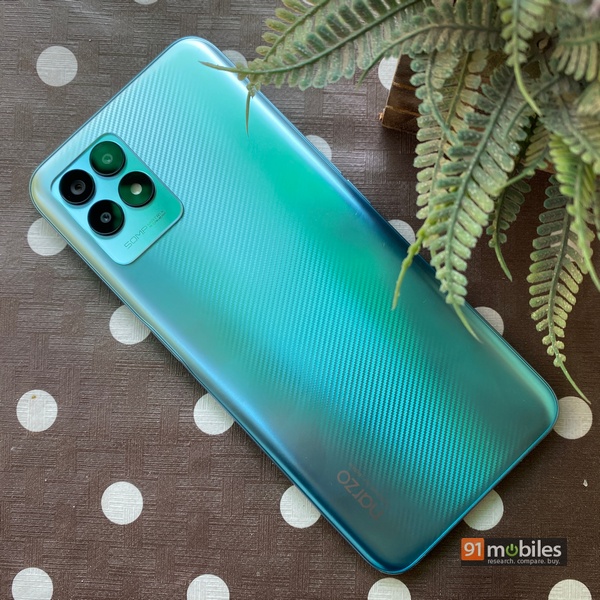 The Narzo 50’s exterior construction matches that of the usual assortment of budget phones in the market. Innovation in that regard has largely remained stagnant with a few notable exceptions. A full unibody polycarbonate construction greets my hands with a smooth, matte-like feel that doesn’t impede fingerprints all that well. There’s a carbon fibre-like pattern inscribed on the back which does look cool under sunlight. As for the rest of the design, it is largely the same as previous Narzo phones. There’s a side-mounted power button cum fingerprint sensor, along with the USB C, 3.5mm headphone jack, and a speaker grille that are placed on the bottom. The volume rocker and SIM card slot sit on the right. The triple cameras and LED flash module are arranged in a matrix format while the housing is mostly flush with the chassis. In terms of weight, I found the phone’s 194g mass distributed evenly across the device making it quite comfortable to hold, a fact aided by the smooth curves on the back which meet the rails. On the whole, the Narzo 50’s design does not leave me thoroughly impressed but given the pricing, it would be foolish to ask for more. 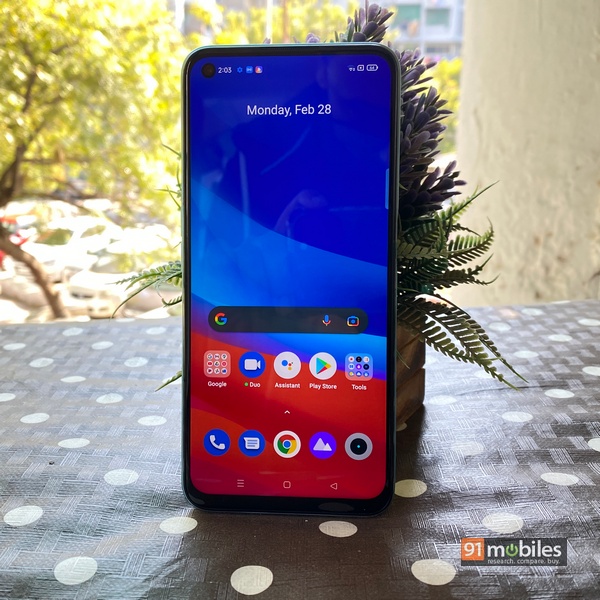 Coming now to the display, Realme has included a 6.6-inch IPS LCD panel with FHD+ resolution, sizeable bezels, a large but mostly unobtrusive punch hole at the top-right, and up to 120Hz refresh rate. Since it’s an LCD screen, the viewing angles are not that great and colour profiles tend to be undersaturated than typical OLED displays. However, as far as the Narzo 50 is concerned, the overall viewing experience is just fine. The WideVine L1 certification, something lacking on the Narzo 50a, is present and ensures HD content on OTT platforms. There are a bunch of display customisations that can fine-tune the screen to the user’s preferences. Backlight bleeding around the punch-hole is visible but isn’t a cause for concern. I was pretty satisfied with the phone’s ability to maintain the full 120Hz refresh rate across supported apps and the interface in general. Brightness levels appeared to be satisfactory for indoor usage although I did face a bit of difficulty reading the screen on sunny afternoons. 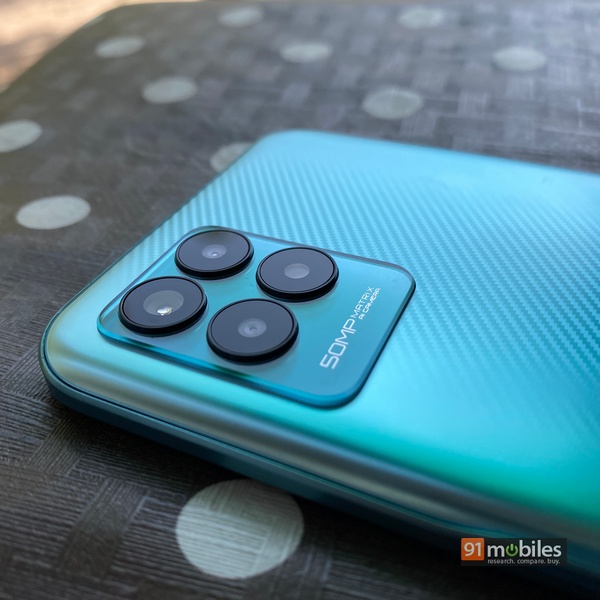 The triple cameras on the device are heralded by a 50MP primary sensor along with the usual macro and depth shooters, while the front of the phone has a 16MP selfie shooter. The affordable segment has slowly been getting a better grip on computational photography such that in bright sunlight, it is easy to get a more than a decent picture. I do have my reservations about the exclusion of an ultra-wide shooter in place for the highly overused and, in my opinion, unnecessary depth sensor. However, the general daylight performance from the main camera was adequate in my opinion. The dynamic range is not the best with some shadowy areas not exposed correctly but the images are serviceable enough. Detailing is good enough on the regular 12.5MP pixel-binned shots that I generally found no need for using the full 50MP mode. Hints of overprocessing were visible in a few scenarios, most of which had low lighting. Night-time photography is not one of Narzo 50’s strong suits but that shouldn’t really come across as surprising. With the exception of a few phones, low light image-taking capabilities still need to be worked upon in the affordable segment. Mostly my issues were centred around focusing speeds and the overexposure of areas with assisted lighting. The dedicated Night mode worked quickly but was faulty in processing details correctly. All this to say that the low-light camera experience is not bad, but there are areas that could do with improvement. The macro and depth sensors seemed to have a superficial use case while I was testing the Narzo 50. I think the former does have a better potential for usage as compared to the latter. HDR kicked in automatically in various shooting conditions and I kept the AI Color Enhancement switched off to stop the colour saturation from going haywire. The phone can record a maximum of 1080p video at 30fps even at Ultra-steady stabilisation which uses EIS. On the front, the 16MP selfie camera clicks detailed selfies with skin tones that were largely accurate, though there’s a fair bit of overprocessing.

In terms of processing, the MediaTek Helio G96 is the choice of silicone on the Narzo 50, as it is on so many other smartphones in this category. Basically, the Narzo 50 won’t lag or stutter under moderate to low workloads. What I mean by that is your usual smartphone usage revolving around jumping between apps, using multiple tabs in Chrome, and social media browsing is unlikely to be hampered. The phone has 6GB RAM that can expand by another 5GB using virtual RAM via internal storage. Having 11GB of memory to play around with is always nice, albeit a bit of an overkill, on smartphones though. The 128GB UFS 2.1 storage can be increased by up to 1TB using a microSD card. Of course, gaming, especially BGMI, will not be a hugely exciting endeavour with a maximum of 45fps being achieved on the device on balanced graphics. 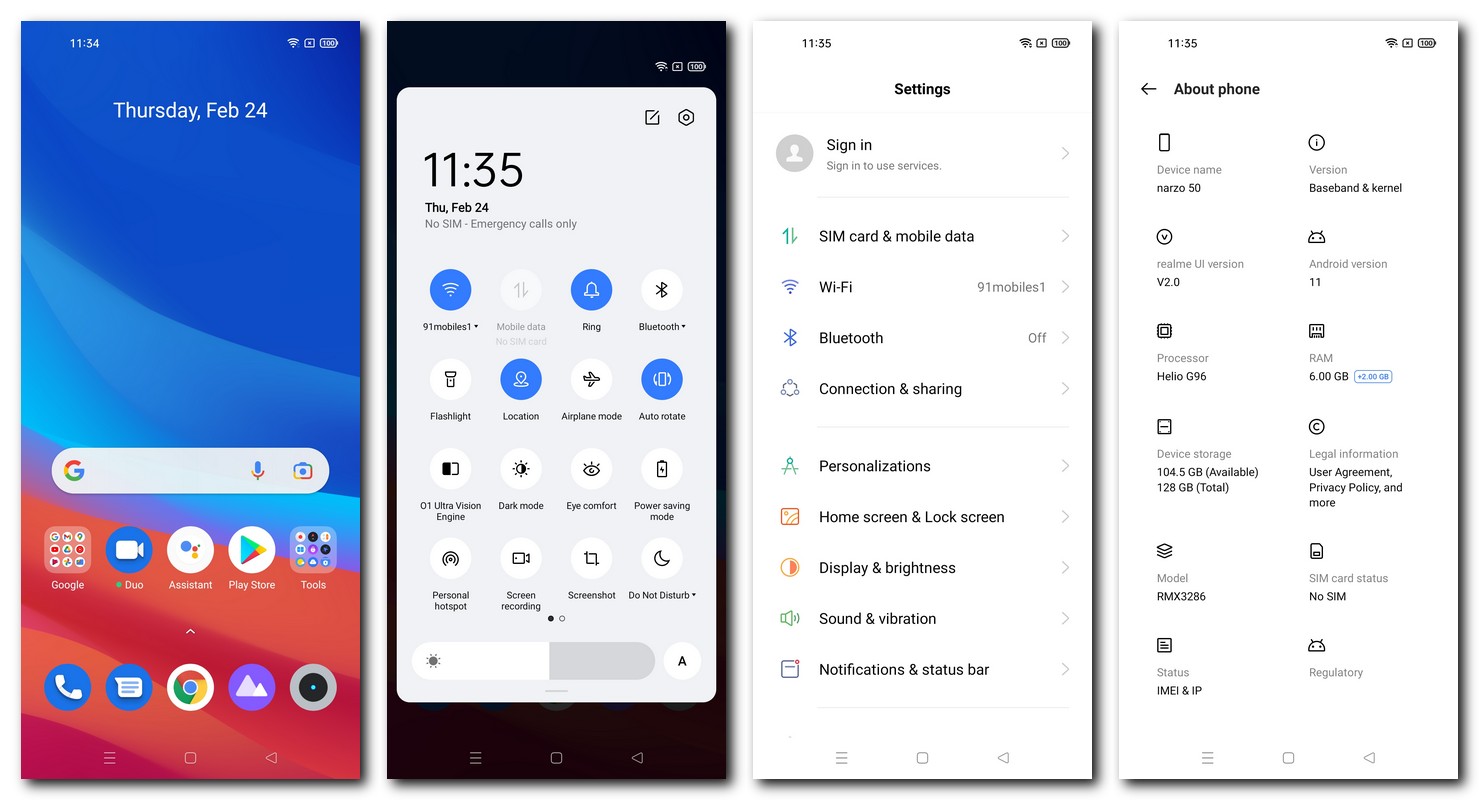 A single bottom-firing speaker unit is present on the device which gets plenty loud but also crackles a bit. The fingerprint sensor is fast and works effectively. There is no 5G on the Narzo 50 though I’m sure that Realme will be looking to launch a 5G specific variant of the phone. The 4G speeds are good enough as is the connectivity on Noida’s Jio network. As for software features, the phone runs Realme UI 2.0, based on Android 11. As I have mentioned in previous reviews of Realme phones, the company’s implementation of an Android skin has improved quite a bit over time. The short story here is that, except for a lot of bloatware, most of which can be uninstalled, RealmeUI is intuitive and user-friendly. However, the lack of Android 12 when Android 13 is on the horizon is a sour spot for me. Glance is integrated into the phone’s lockscreen and you can customise it to see content you like, including news and sports updates, games, and more. The best part – Glance doesn’t consume data when not in use.

The Realme Narzo 50 has a 5,000mAh battery integrated inside, with 33W charging support. This is a pretty standard capacity cell at this price point and works as expected. During my time with the device, I was mostly finishing the day with up to 40 percent juice still in the tank. Granted my day was not spent gaming on the device but I don’t think the users will find too much pleasure in GPU-intensive tasks anyway. As for the 33W charging, it took about 90 minutes or so to take the battery from 0 to 100 percent via the USB C port. 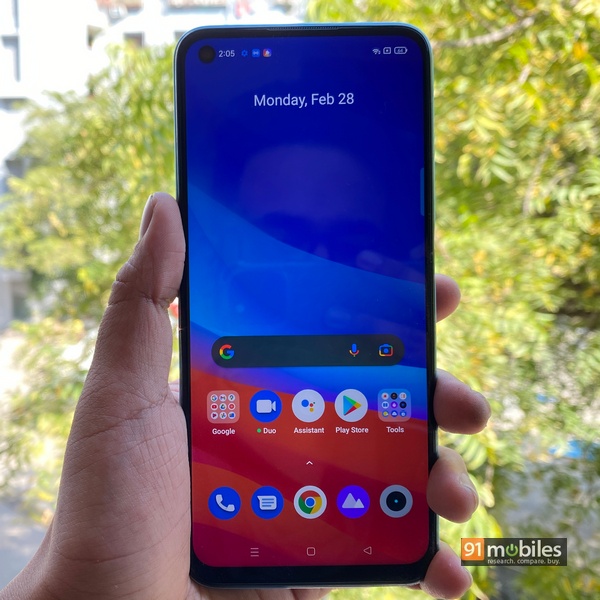 In terms of overall value-for-money, I think that you are getting exactly what you are paying for, barring an OLED panel or an ultra-wide sensor. The pertinent question is whether you should drop an extra Rs 500 and buy the Redmi Note 11 (review) for Rs 13,499. I think the answer is yes, especially if you prefer a better display, better overall design, and a camera experience that doesn’t skimp on details. However, if its performance and clean UI appeal to you, then the Narzo 50 is the way to go.

Realme Narzo 50 India launch event today: time, how to watch live-stream, and what to expect

Realme Narzo 50 confirmed to launch in India on February 24th