91mobiles.com
Home Reviews Realme Narzo 50a review: all about that camera? 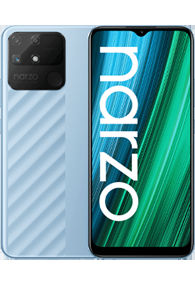 The ever-expanding Narzo series by Realme just got a new addition in the form of the Narzo 50a. The smartphone has been priced starting at Rs 11,499 for the 4GB + 64GB version and competes with a few other devices in the budget segment which has already become very crowded. At the helm of the Narzo 50a is the MediaTek Helio G85 chipset while the primary camera has a 50MP sensor that was seen recently on the Redmi 10 Prime (review). Can the Narzo 50a make for a reasonable choice in the under Rs 15,000 mobile segment? Let’s find out in this full review of the device. 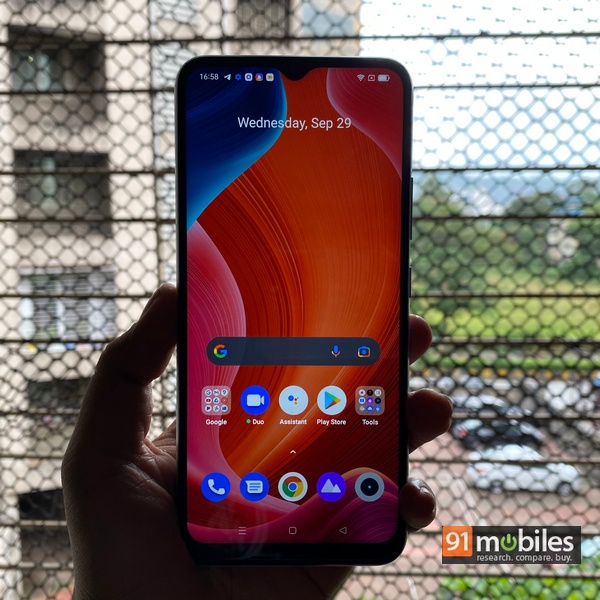 The Realme Narzo 50a is a decent phone, especially with regards to its battery life and daylight camera performance. However, it does lack certain display metrics like WideVine L1 certification and a high refresh rate which could make prospective buyers gravitate towards other devices. 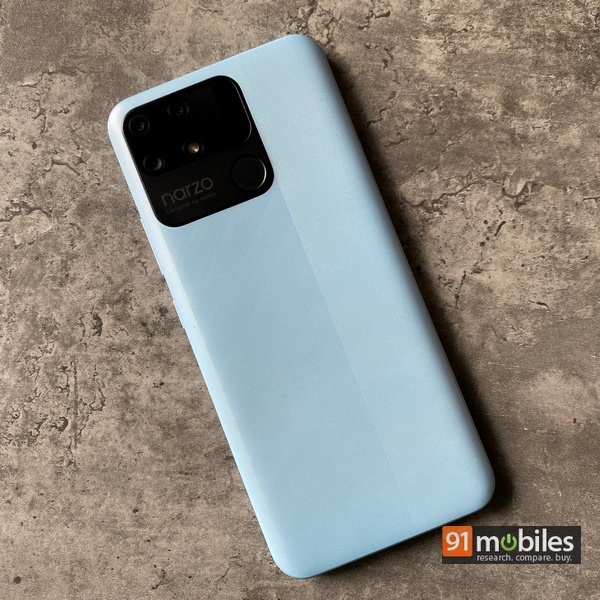 The Narzo 50a has a unibody polycarbonate design with a textured look that has been around on the Narzo lineup since its inception. That said, the camera bump looks different. I am slightly befuddled with the fingerprint sensor placement which has been put right on the bottom edge of the massive camera housing. While the look is unique to the device, the sensor’s utility could have been better served on the side. The phone’s bottom has a USB C port along with a 3.5mm headphone jack and a speaker grille. The device’s 6,000mAh battery makes the chassis slightly thick but the weight of the device feels quite balanced in my hand. The volume rocker button feels slightly flimsy although the overall device build happens to be very rigid and firm. 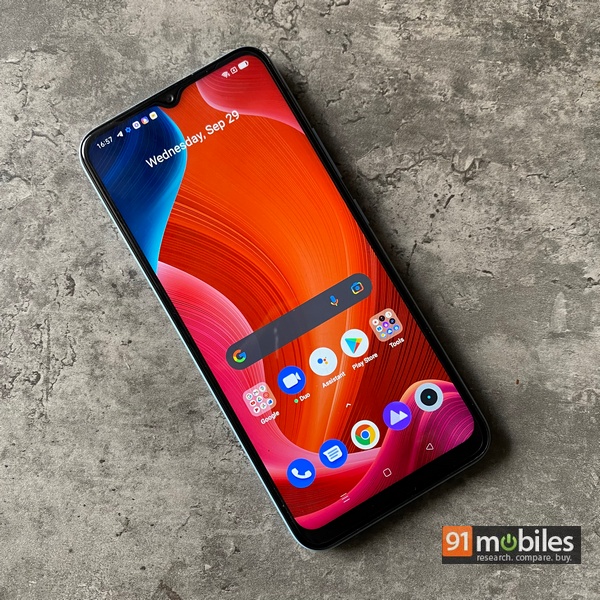 The display is a 6.5-inch HD+ panel of the IPS LCD variety, with 60Hz refresh rate. A waterdrop-notch, which has fallen slightly out of fashion, is present on the top while the display is surrounded by reasonably big bezels. The displays on Realme’s Narzo series have been mostly decent for the price but I was not very impressed by what the Narzo 50a has to offer. There was a slight off-axis colour shift as is normal on an LCD panel and in terms of display calibration only the option to change the colour temperature is available. Unfortunately, the phone does not have WideVine L1 certification for viewing HD content on OTT platforms which seems like a big miss. The brightness levels are average and the ambient light sensor that adjusts them automatically iffy as well. Not adding higher refresh rate also seems to be a big miss from Realme. 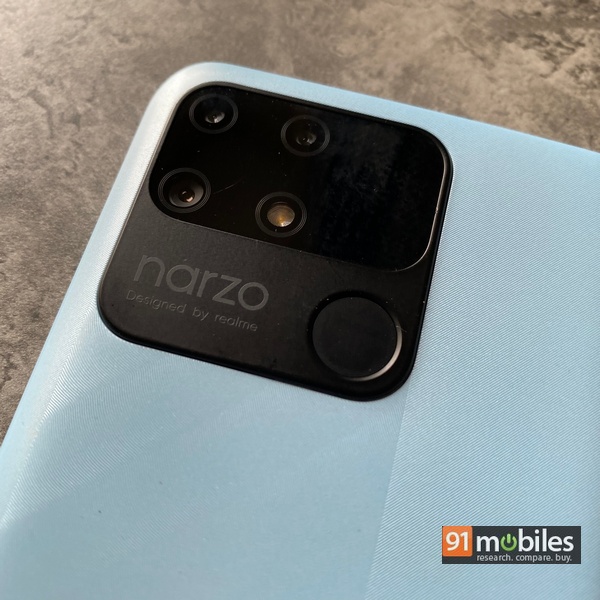 On the camera front, there is a 50MP primary sensor which is supported by two secondary depth and macro sensors, while the selfie shooter has an 8MP resolution. Here’s a gist of how the device fares in terms of photography. 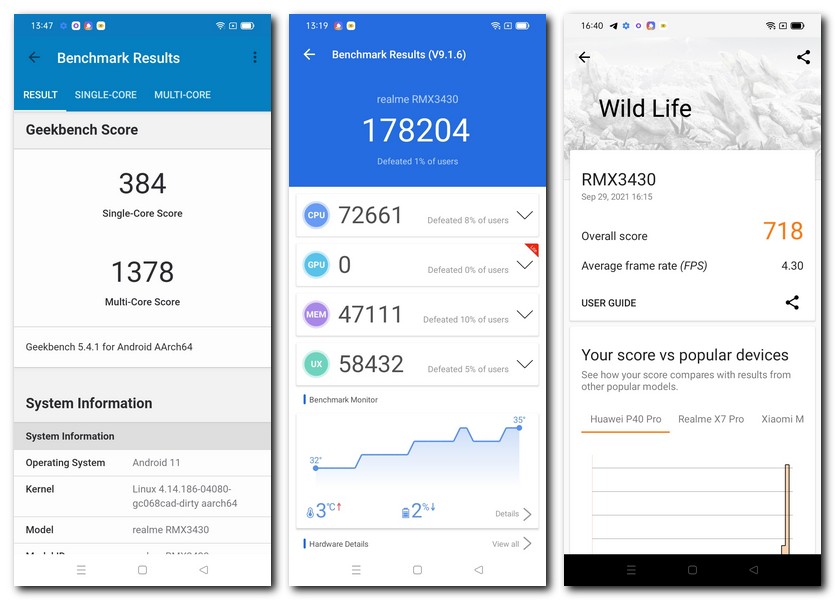 The processing capabilities are being handled by the MediaTek G85 SoC which has become quite a staple for several smartphones in the budget space. There are no performance-related issues, as I was able to get through all my daily tasks without any lag. Opening several Chrome tabs and switching between heavy apps like Instagram or Spotify is also quite snappy. For GPU intensive tasks like playing BGMI you are limited to lower graphics and a slightly choppy frame rate. However, the device is able to sustain the gameplay without heating up too much. The phone comes with 4GB of RAM with up to 128GB of internal storage that can later be upgraded to 256GB using a microSD card. 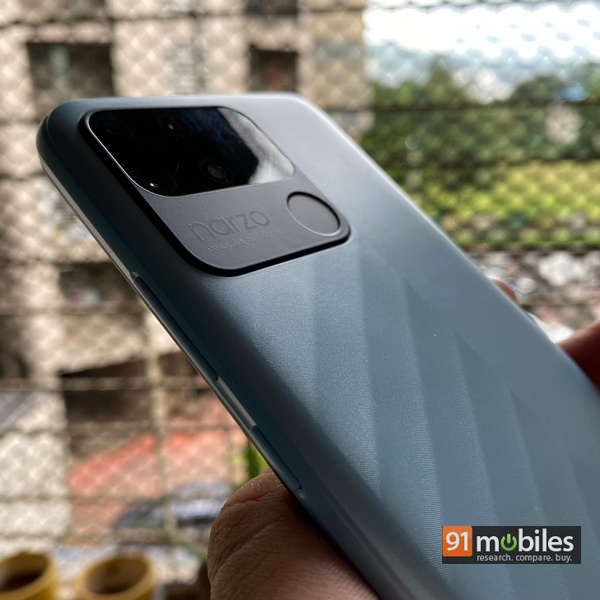 Authentication-wise the fingerprint sensor works fast and without any issue, although reaching it at the top is a cumbersome task for my index finger. The single bottom-firing speaker is not very loud but has decent sound quality. The 4G LTE speeds on Jio’s Noida network work without issues as do the microphone and earpiece. In terms of software, Realme employs its RealmeUI 2.0 skin which is based on Android 11 and is one of the nicer Android UI skins in the market. Bloatware is a problem which still persists but otherwise, the skin is quite user-friendly with regular software updates on offer. 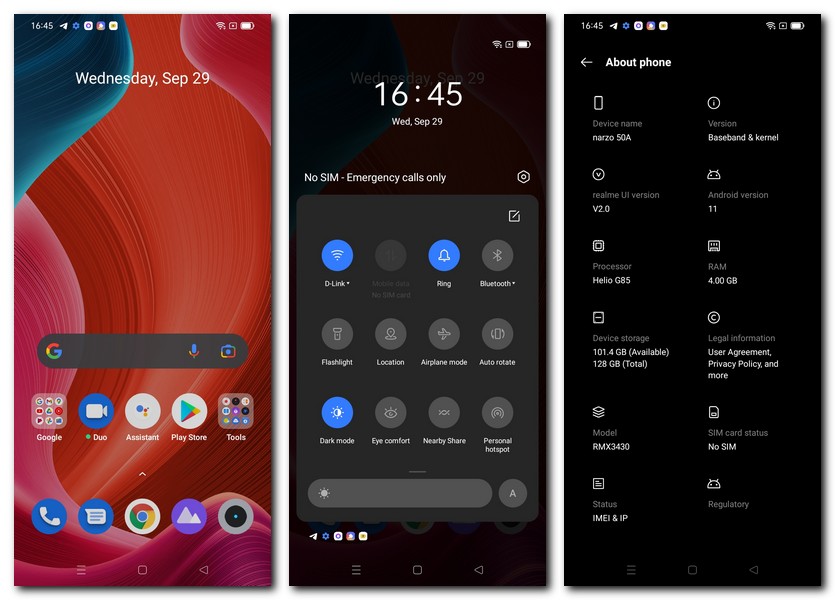 The battery on the device is a massive 6,000mAh cell that has the capability to push the phone easily through two days of normal usage. I generally used the phone to browse my social media accounts, watch YouTube videos, play an hour or two of BGMI and I ended the day with close to 40 percent battery. There is an 18W charger provided with the box that takes over 2 hours  to juice up the phone, which is pretty average.

The Realme Narzo 50a relies on its camera as a driving point in the face of intense competition from the likes of Xiaomi and Infinix. You do get pretty decent shots from the device but the other aspects of the Narzo 50a are not exceptional in any way. As a matter of fact, the lack of a higher refresh rate panel and absence of WideVine L1 certification can be deal-breakers for some. That said, it deserves a recommendation for its rather good camera performance in daylight scenarios, satisfactory performance, and long battery life…. and that, for many, should suffice anyway, 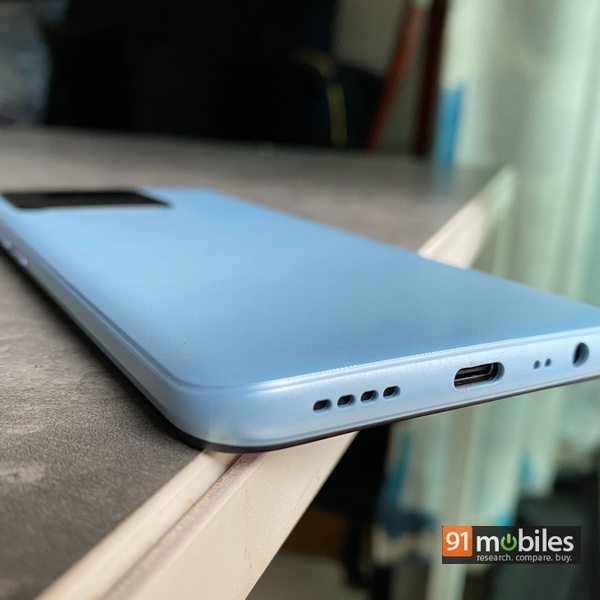