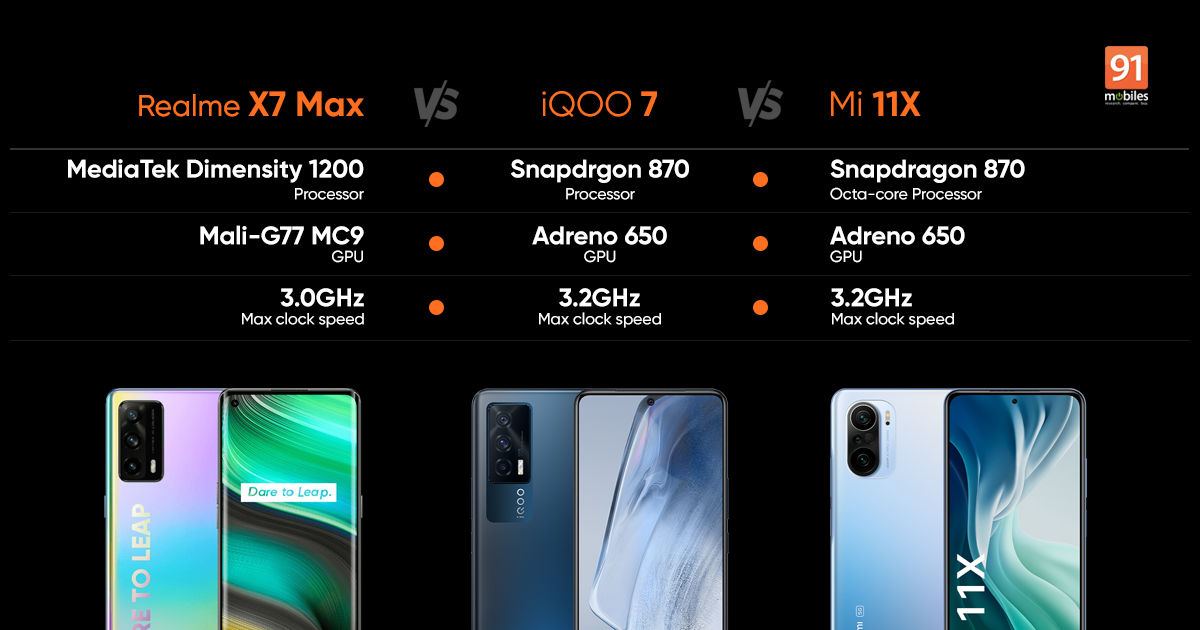 Realme has been on a launch spree this year, and it’s latest comes in the form of the Realme X7 Max. The new handset is part of the company’s mid-range X7 series and joins the Realme X7 (review) and X7 Pro (review) smartphones that have the new MediaTek Dimensity chipsets powering them. The Realme X7 Max debuts with the Taiwanese semiconductor giant’s new Dimensity 1200 chipset. This SoC can be considered MediaTek’s flagship chipset and shows how serious the company is to compete with Samsung and Qualcomm at the highest levels of mobile computing. In this performance comparison, let’s pit the Realme X7 Max against its closest competitors, which are the IQOO 7 (review) and Mi 11X (review), both powered by the Qualcomm Snapdragon 870 chipset. 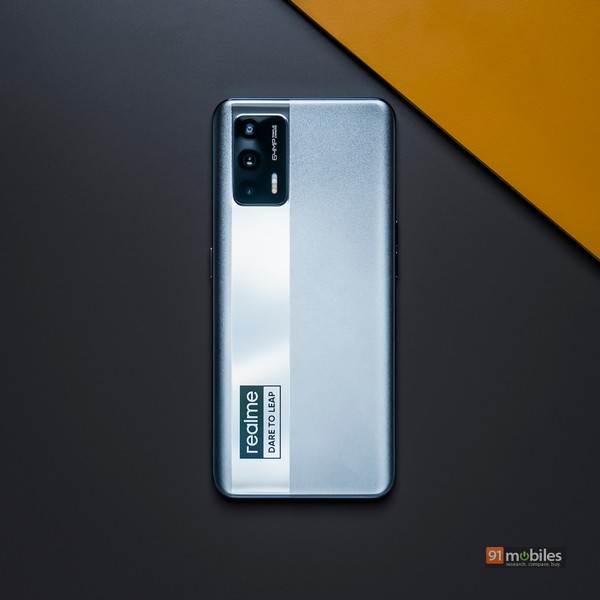 The Dimensity 1200 5G chipset has been made using a 6nm fabrication process and has eight cores. There is one Cortex A78 Ultra core clocked at 3.0GHz and three supporting performance Cortex A78s clocked at 2.6GHz. The efficiency cores are your standard Cortex A55 cores clocked at 2GHz. As for the graphics, they’re handled by the Mali-G77 MC9. In comparison, the Snapdragon 870 has one Cortex A77 clocked at 3.2GHz paired with three others that have 2.42GHz clock speed. The efficiency Cortex A55 cores spin at 1.8GHz and the graphics are handled by the Adreno 650 GPU. One way to get an idea about the processing capabilities of a smartphone is to run it through a bunch of synthetic benchmarks. The most popular ones on the Play Store are Geekbench 5, Antutu V9, 3DMark, and GFXBench. Let’s see how the three smartphones stack up.

On Geekbench, you will be getting a single-core and multi-core score to assess how good the chipset actually is. On the Realme X7 Max, I got a score of 968 and 3,327 respectively. The Mi 11X saw a comparative score of 994 and 3,297 while the IQOO 7 scored 1,005 and 3,348. From these scores, it is quite clear that there is very little that separates the three phones in terms of pure performance, even though the Dimensity 1200 has a slightly better Cortex A78 for performance-related tasks.

For a more overall approach to smartphone performance with factors such as UI, Memory, and GPU usage, Antutu V9 gives the best results. The Realme X7 Max got an overall score of 708,871 which is the highest amongst the three devices but not by much. The IQOO 7 scored 703,644 while Mi 11X was the lowest at 675,463. One thing to note here is that the Realme X7 Max lost only two percent of its battery and gained about 5 degrees in temperature. The Mi 11X ran hot with a 7.5 degree gain in temperature and dropped 5 percent battery during the test.

This GPU-intensive benchmark runs a bunch of intensive simulations on the device and returns an fps count. Here the Realme X7 Max and IQOO 7 got 60 fps on the both T-Rex and Manhattan tests, but the IQOO 7 shattered both devices with scores of 113 fps and 119 fps on the tests respectively. Even on Manhattan 3.1 the IQOO 7 got a much higher score of 84 fps as compared to the 59 and 60 fps seen on the Mi 11X and X7 Max respectively. This could be due to the IQOO 7’s Game frame rate interpolation feature that upscales the fps count to match the screen’s frame rate.

More clarity can be gathered from the 3DMark benchmark’s WildLife Extreme and WildLife test. Here the IQOO 7’s lead is not as significant as before and it scored 4,243 on WildLife while the Realme X7 Max and Mi 11X returned scores of 4,169 and 4,186 respectively. The more stressful Extreme test saw the IQOO 7 marginally falling behind the Realme X7 Max with a score of 1,234 while the latter showed 1,284. The Mi 11X consistently came last with a 1,221 score. However, it should be noted that such small differences in scores are negligible in the context of real-world usage.

The release of Battlegrounds India, which is just PUBG Mobile repurposed for the Indian audience, is going to be announced soon and should become my main source for testing a device’s graphical endurance. For now, the use of Call of Duty Mobile should suffice.

For this test, I ran CoDM on all three phones at the maximum Frame Rate (FR) and Graphic Quality (GQ) settings that the devices allowed. In the case of the Realme X7 Max, the device offered the Max FR option only when the GQ was set at High instead of Very High. Both the IQOO 7 and Mi 11X can run the game at Very High GQ and Max FR. To be fair, the difference between the two GQ options is minimal but still something to keep in mind if you are a mobile game purist.

Running the title for 30 minutes I saw the battery on the Realme X7 Max drop by about 9 percent while the maximum temp gained was about 4 degrees before things started to cool down. IQOO 7 also saw a battery drop of about 9 percent while the max temp gained was about 4.5 degrees… with the phone showing no sign of cooling down in between. The Mi 11X had a 9 percent decrease in battery, but gained the most temperature at nearly 8 degrees. Seems like the X7 Max has a better cooling system amongst the three devices and it’s likely that the device can sustain better frame rates over longer durations.

From these tests, I can say that among these smartphones, the choice for gaming is a tie between the IQOO 7 and Realme X7 Max from a benchmarks standpoint. However, the former features Game frame rate interpolation so I would recommend the IQOO 7 as the default gaming device between the three. The only niggle I have is with the Mi 11X’s lack of cooling during intensive graphical tasks which could affect the frame rate after a period of time, but other than that, the three devices seem pretty evenly matched in terms of pure performance.