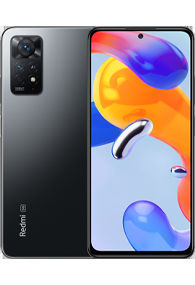 Xiaomi recently revealed its latest series of devices in its signature Redmi Note lineup, which has been for some time, the benchmark against which affordable smartphones are compared. There are three new phones from that company that are making the rounds in the market currently ie. the Redmi Note 11, Note 11T (review), and Note 11S. All phones, at least in terms of the specs on offer, highlight Xiaomi’s seriousness towards creating ripples in the affordable space. I have the Redmi Note 11S with me, which is a 4G phone that harbours good enough hardware to warrant a second look. I suspect the 5G version of the device is not too far off with almost all OEMs joining in the 5G race, but for the here and now I’m reviewing the regular Redmi Note 11S, priced starting at Rs 16,499. Let’s see how well it holds up against the competition. 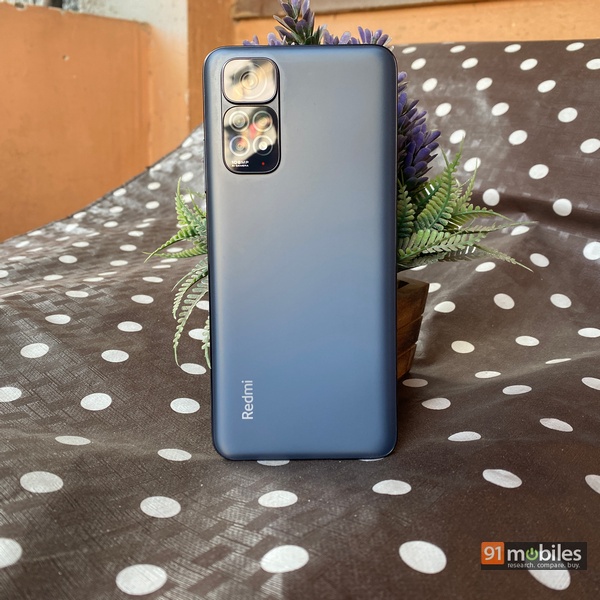 Redmi’s knack for crafting handsets that are easy on the eye is well known in the industry. In fact, I was most infatuated with the previous Redmi Note 10 (review) series in terms of in-hand feel along with the general aesthetic appeal. The Note 11S borrows the choicest of design choices from its predecessor including the all-matte finish on the back. The edges slope gently downwards to meet the rails which are also coated with the same matte look and provide my palm with an easy grip. There’s nothing outwardly flashy about the Note 11S’ appearance which is just how I like it, clean and minimalistic, though this is clearly a matter of personal choice. There are three colour options to choose from which are Polar White, Horizon Blue and Space Black. The back panel is uninterrupted save for the sizeable camera module on the top-right which retains the vestiges of previous Note 10 smartphones. 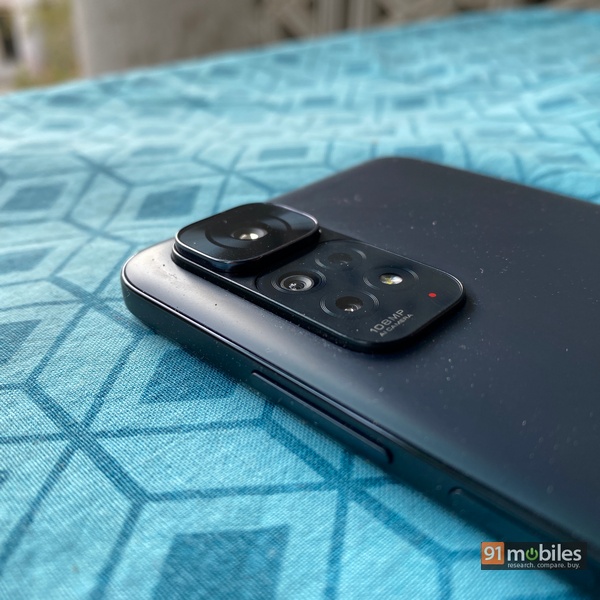 A massive primary sensor dominates the housing below which includes three smaller cameras and a flash unit. Astoundingly, even with a 5,000mAh battery inside, the Note 11S is super lightweight at 179g, with an even distribution of its weight across the chassis. Xiaomi is still choosing to place the 3.5mm headphone jack on the top of the phone, which is a rather unconventional location. Speaking of which, the trusty IR blaster is also present on the top of the phone, while on the bottom you get a USB C port and a speaker grille which doubles up with the earpiece for stereo sound. The fingerprint sensor has been integrated with the power button on the side and the tactile volume rocker button is placed slightly above it. 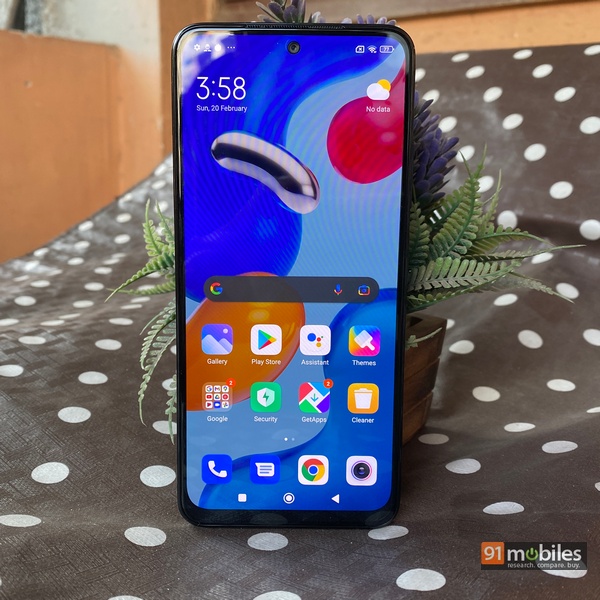 On the front, the Redmi Note 11S packs in a 6.43-inch AMOLED panel with a 90Hz refresh rate and 180Hz touch sampling rate. Xiaomi has been at the forefront of creating affordable OLED packing smartphones, a tradition it is continuing with the Redmi Note 11S. Even to the eyes of a novice, the Note 11S’ panel is calibrated to display a wide variety of colours and is more vivid than any LCD panel in the price range. Apart from that, the visual palette can be easily customised to the user’s convenience and the 90Hz panel doesn’t miss a beat as far as smoothness is concerned. At 1000nits of peak brightness, the Redmi Note 11S’ display won’t be a problem when viewed under harsh sunlight. Unlike the Redmi Note 10, the Note 11S does not support HDR10 but has to contend with a regular WideVine L1 certification for HD content on OTT platforms. Lastly, there is a minuscule punch-hole at the top which does not interfere with the display proceedings although the chin at the panel’s bottom is noticeably wide. 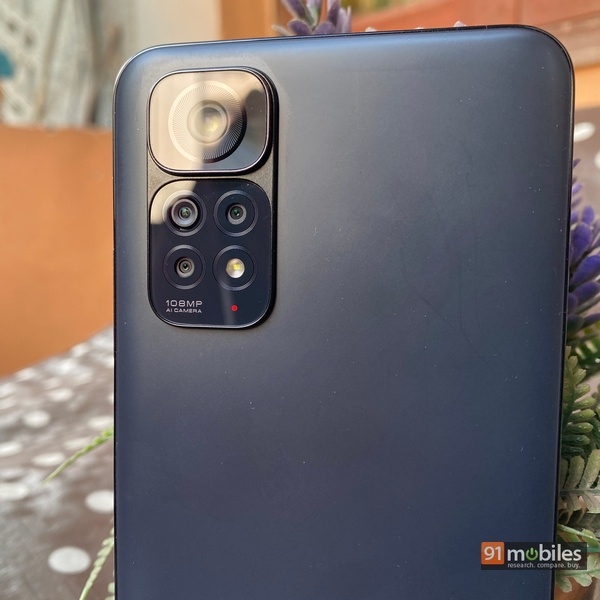 Cameras on Redmi Note series phones have seen an exponential improvement in the last couple of years, and the Note 11S flaunts a 108MP primary sensor to do most of its image capturing work. Like most phones, the Note 11S is proficient in good daylight conditions capturing ample details and delivering a wide dynamic range. While the device tends to overexpose shadowy areas of the frame with mixed results, it manages to keep the exposure in check during bright sunlight. However, the colour temperatures favour a cooler look than natural. Grainy-ness in details is almost imperceptible, but you do find some irregularities in high texture backgrounds. The AI camera features make the colours look oversaturated. The regular images are pixel-binned down to 12MP, but you can get more detailed shots with 108MP UHD mode. This does need a long time for processing though. In low light, the sensor falters while trying to get details of the subject and in the process, the exposure goes haywire. There is also a substantial shutter lag while taking shots that tends to introduce a bit of blurring. I also noticed the focus is not always locked when using the dedicated night mode. Ultra-wide shots, for the most part, are warped around the edges but have a much more neutral colour temperature as compared to the regular wide-angle sensor. The other two sensors are a 2MP macro shooter and a 2MP depth camera, both of which are not too great when the light surrounding the subject is less than ideal. Finally, there is the selfie shooter on the front, which has a resolution of 16MP. I did find the images clicked by it laced with a bit of facial oversharpening and skin tones happen to be a bit fairer than usual, but otherwise, the selfies are quite good. 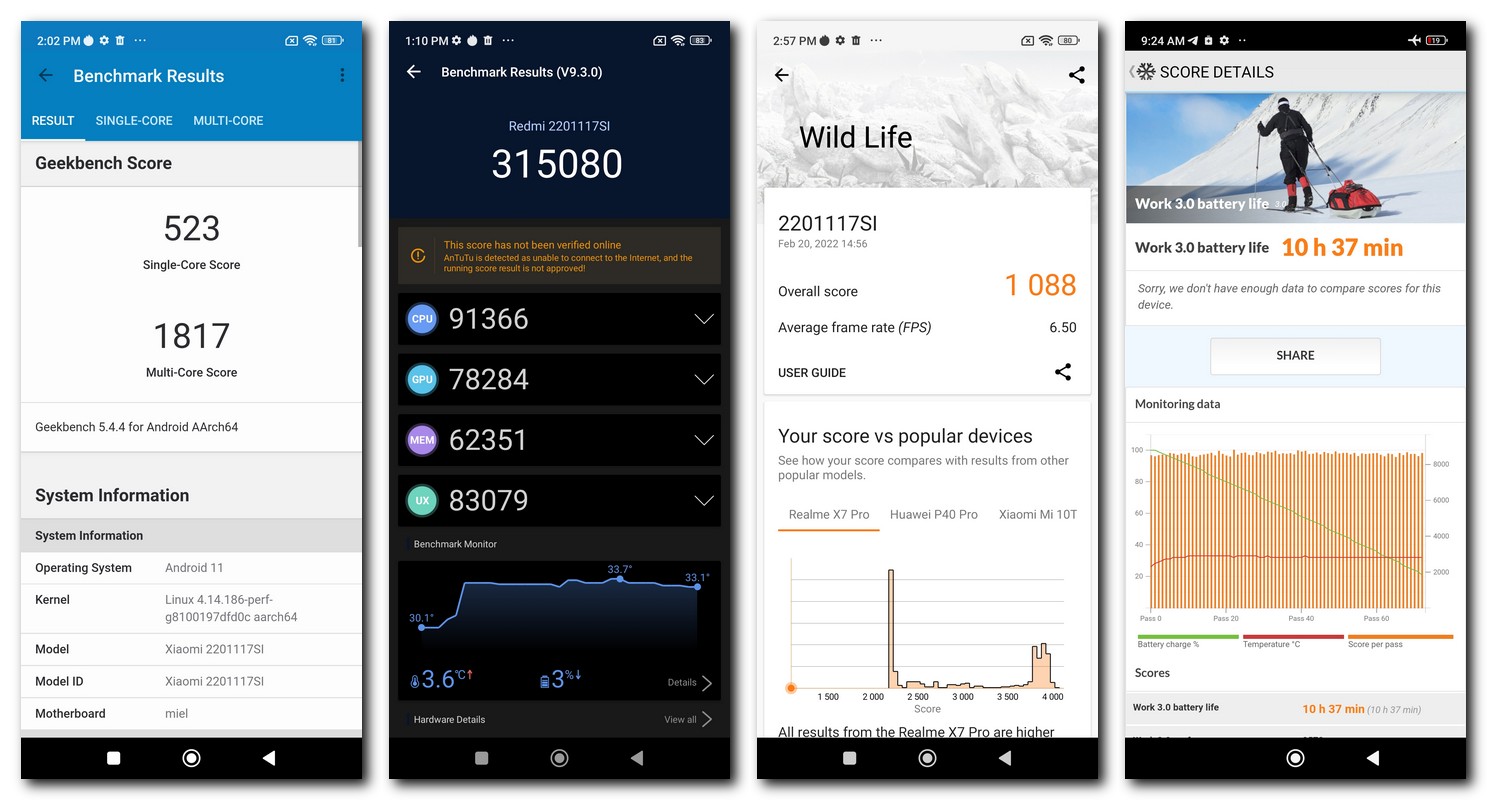 The processing needs of the device are taken care of by the trusty MediaTek G96 SoC. At Rs 16,499, there are a few contenders that can offer better performance, such as the Dimensity 810-powered Redmi Note 11T, priced about the same. That said, the Note 11S is not going to disappoint you as far a regular day-to-day tasks are concerned. In more taxing jobs like BGMI, the phone does manage the Ultra (45fps) setting that works with a maximum of Balanced graphics. I wouldn’t, however, stress the phone’s capability beyond that. As for RAM and storage requirements, the variant I have comes with 6GB of LPDDR4X RAM which can borrow 2GB from the 128GB of UFS 2.2 internal storage of the device. Apart from that the phone also has an external microSD card slot which can support up to 1TB of extra storage. 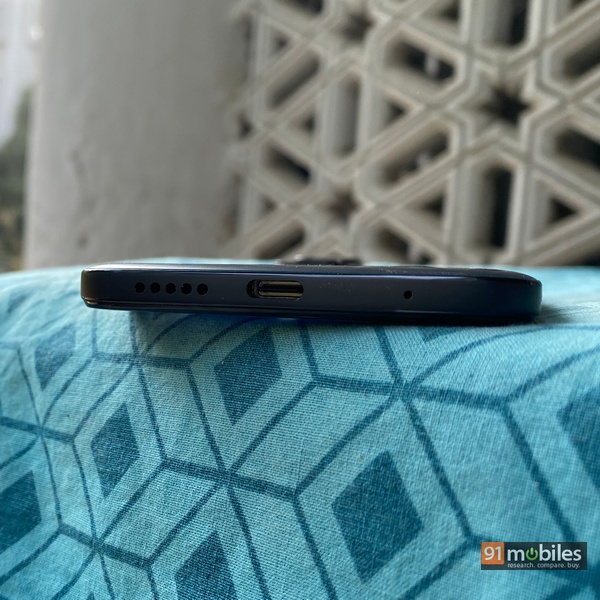 Redmi has equipped the Note 11S with a stereo speaker setup that sounds wonderful and is easily audible across a noisy room. Even the 3.5mm headphone jack has Hi-res audio certification for compatible wired earphones/headphones. The fingerprint sensor is as fast as ever while facial recognition needs some fine-tuning for low lighting. 4G LTE speeds were largely respectable enough on the device while on Noida’s Jio network and the microphone and earpiece worked as expected. 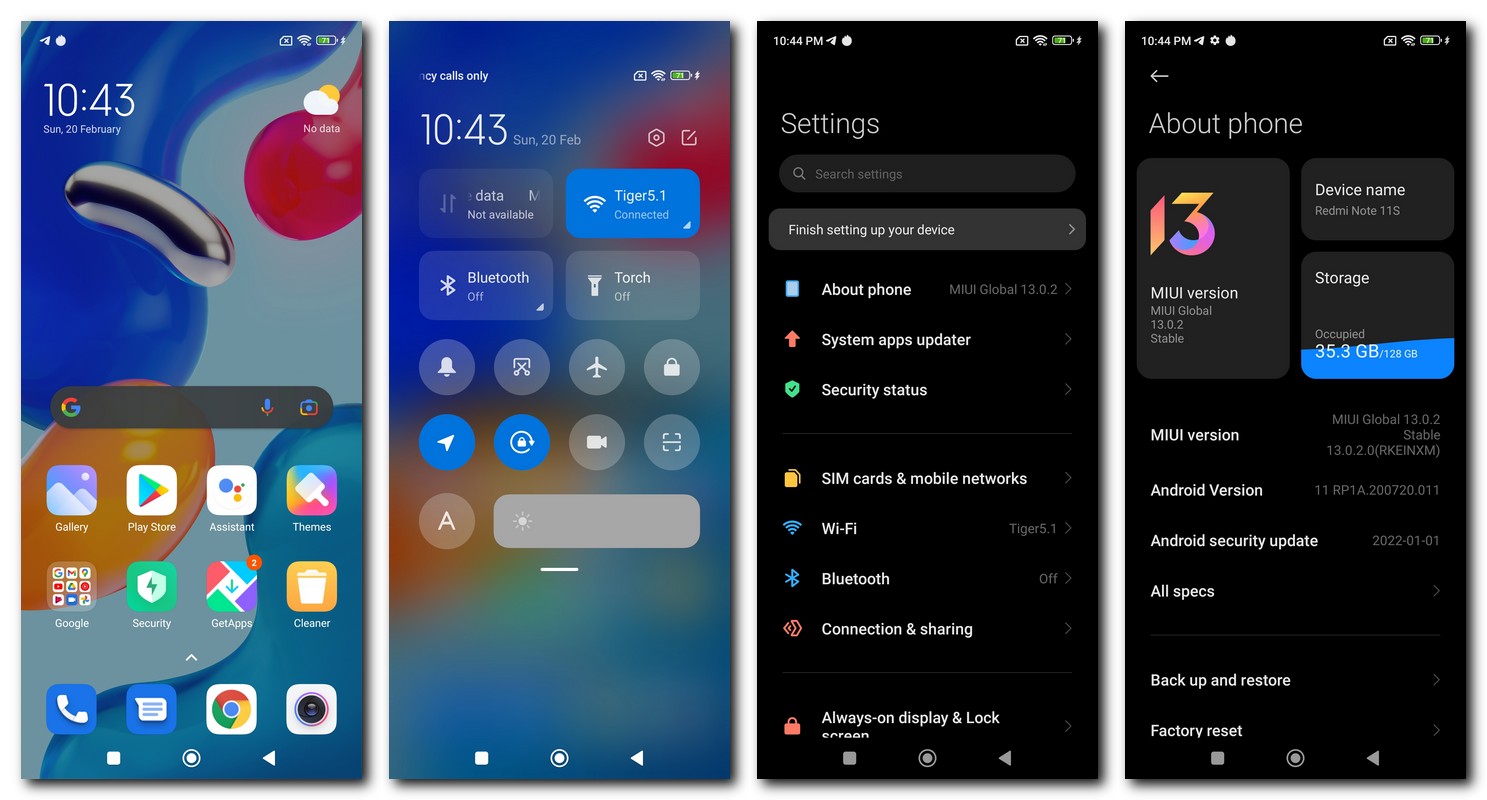 Talking about the software implementation, the Redmi Note 11S is running MIUI 13.0.5 which is based on Android 11. I do expect Xiaomi to release an Android 12 update soon. In the current interface, I noticed that the app switching happens vertically instead of horizontal, which takes a bit of getting used to. There is the familiar clutter of bloatware, but thankfully, most of it can be uninstalled. Apart from that, the UI is quite intuitive and fun to play around with, especially if you are the type of person who likes customisability in terms of themes, icons and more. As for utility usage, MIUI 13 has a sidebar that can be pulled up with a single swipe and contains a list of apps that can be quickly launched. The control panel also sees a new redesign with larger icons and a better grouping of notifications. You can switch to the old version as well with some tweaks in the settings menu. Glance is integrated into the device lock screen, and can be customised to show you live content, news and sports updates, and more. Of course, it doesn’t consume data when not being used. 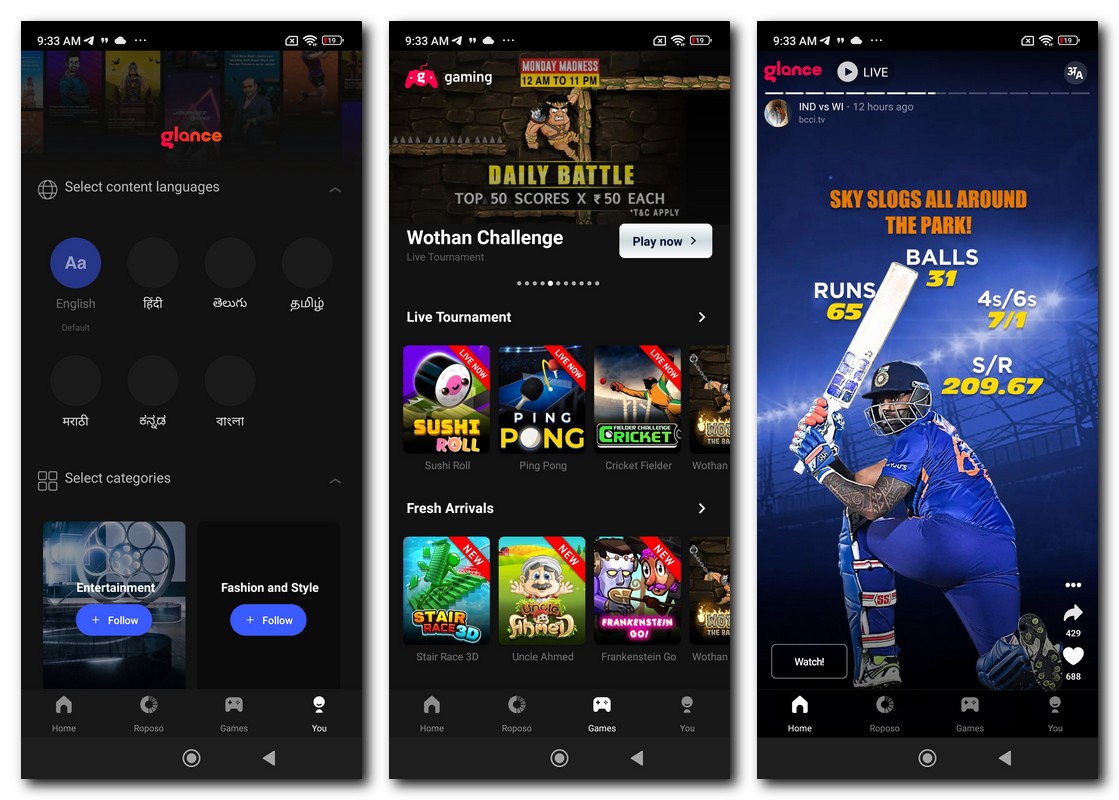 Inside the Redmi Note 11S is a 5,000mAh battery that withstands a day of heavy usage with some juice to spare for the next day. This is by no means a very long-lasting device but it will get the job done on a single charge. In any case, the 33W charger provided inside the box can boost the battery up to 100 percent in just about 90 minutes. 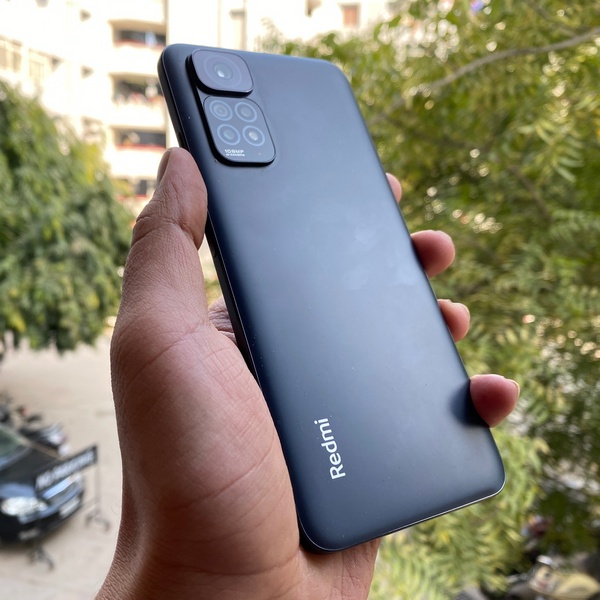 The Redmi Note 11S is a compelling offering and I feel that it certainly does its bit to justify the Rs 16,499 price tag. The design is slick, the display is awesome and the performance is decent. I do, however, strongly feel that Redmi should have tweaked its photography algorithms to get better low light shots. Also, the UI has some bloatware in the form of Mi-branded apps, and the phone still runs on the old Android 11. I feel that if you are willing to overlook these few drawbacks and aren’t inclined towards heavy gaming, the Redmi Note 11S can be a very good option.

5 features Redmi Note 11S does not offer but its rivals do: 5G, 120Hz display, and more