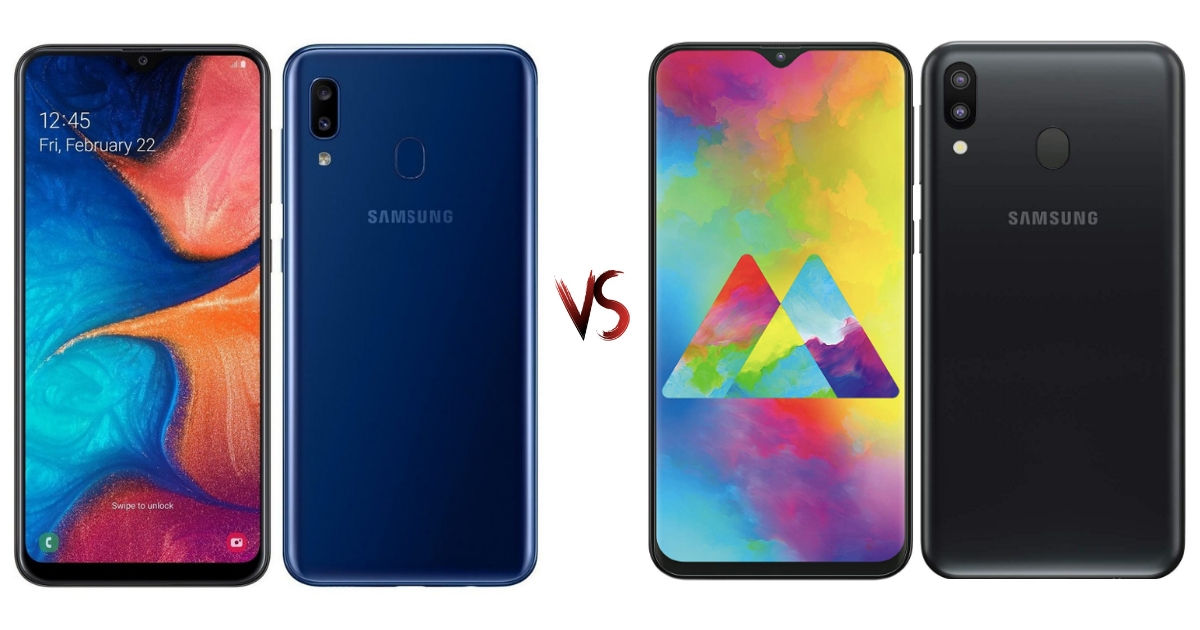 Samsung has launched yet another A series smartphone in India. The new Galaxy A20 is the latest in the A series line-up that brings good features at an affordable price point. The A series and the M series smartphones will compete with the budget mid-range offerings from Xiaomi, OPPO, Vivo, and other Chinese companies. The new Galaxy A20 is well priced and shares some features and design cues with the Galaxy M20 (review). In this post, we will be looking at the differences between the two phones to find out which is a better buy.

Samsung Galaxy A20 vs Galaxy M20 price in India

Both of these Samsung phones are budget offerings and come with a reasonable price tag. The Galaxy A20 price in India, set at Rs 12,490, is higher than that of the Galaxy M20. The handset comes in a single configuration, with 3GB RAM and 32GB of onboard storage. The phone will be available in Black, Blue and Red colour options and will go on sale on April 8th. It will be available for purchase at most online and offline retailers.

Meanwhile, the Galaxy M20 is available in two variants. The base version comes with 3GB RAM and 32GB of internal storage. This variant is priced at Rs 10,990. The higher variant, which comes with 4GB RAM and 64GB storage, will cost you Rs 12,990. It is available in two colour options – Charcoal Black and Ocean Blue. Looking at the prices, the Galaxy M20 looks like a better deal as you will get a phone with more RAM and storage. Nevertheless, let us look at the differences in specifications.

The Galaxy A20, as mentioned earlier, is only available in a single version. The design is very similar to that of the Galaxy M20. From the back, both devices look identical to each other, with the only difference being the Red colour option. Samsung has used plastic on both phones and the design is pretty boring. On the front though, the phones look quite modern thanks to small U-shaped notch at the top.

On the front, the Galaxy A20 comes with a 6.4-inch Super AMOLED Infinity V display with an HD+ resolution. Compared to this, the Galaxy M20 offers a higher resolution full-HD+ panel with a screen real-estate of 6.3-inches. However, this panel is of the TFT type, so it may not be as good as the AMOLED screen.

Coming to the internals, both phones are powered by Samsung-made Exynos chipsets. The Galaxy A20 sports the Exynos 7884 processor, while the Galaxy M20 has a slightly newer Exynos 7904 processor. Both are decent mid-range chipsets, but don’t expect them to outperform Snapdragon counterparts. As mentioned in the beginning, the former comes with only 3GB RAM and 32GB storage, whereas the latter can be had with up to 4GB RAM and 64GB storage. Both devices feature a microSD card slot for storage expansion.

The Galaxy A20 features a 4,000mAh battery with support for 15W fast charging, but the Galaxy M20 is a clear winner here. It comes with a beefier 5,000mAh cell that also supports fast charging via a USB Type-C port. Even the Galaxy A20 gets a USB Type-C port. Both phones feature an oval fingerprint scanner mounted at the back and also get the 3.5mm headphone jack. The Galaxy A20 features the newer One UI and runs Android 9.0 Pie out of the box. On the contrary, the Galaxy M20 runs on Android 8.1 Oreo with Experience UI.

As for cameras, both the phones feature a vertical dual-camera setup at the back with similar sensors. Both get a primary 13-megapixel sensor with a secondary 5-megapixel depth sensing unit. For selfies, an 8-megapixel fixed focus camera is available on both devices.

In conclusion, the Galaxy M20 seems to be a better option as it has a bigger battery, higher resolution display, and more RAM and storage.