If there’s one smartphone maker which has its finger in all the pies, it’s undoubtedly Samsung. The company is behind some of the grandest Android phones launched every year. At the same time, the brand offers a slurry of affordable Android handsets under its Galaxy M range. Finally, the Galaxy A series of devices cater to those who want a flagship experience at a stomachable price point. Case in point, the all-new Galaxy A53 5G, which offers an IP rating and a brand-new 5nm SoC for just under Rs 35K. So then, should you opt for Samsung’s latest? Well, let’s find out.

The Samsung Galaxy A53 5G might not be the fastest phone out there, but the handset still brings a lot to the table, including a versatile set of cameras, a good-looking design and a longevous software update roadmap. Coupled with its sturdy, polycarbonate, weatherproof chassis, the device could be the one for you. 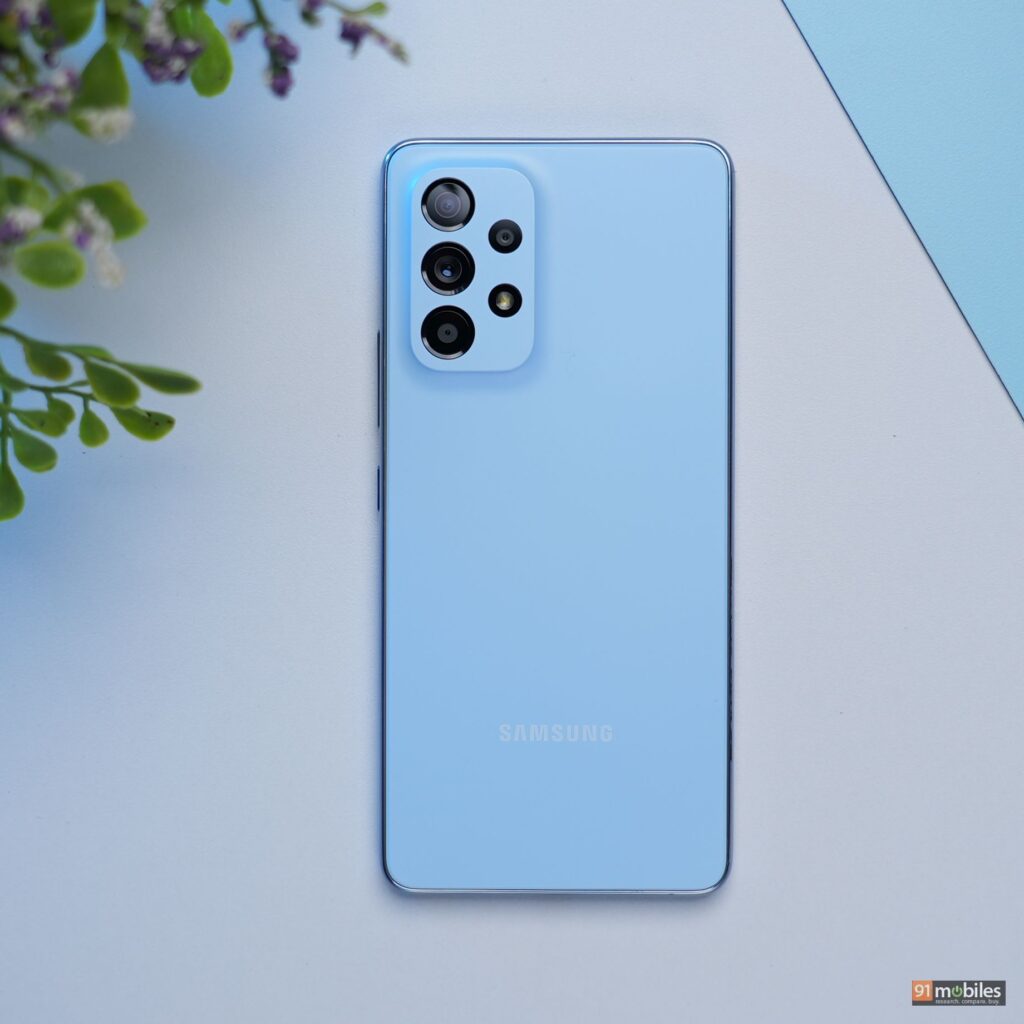 But, to get you up to speed, the handset employs a polycarbonate build and is available in a slew of peppy hues. I was sent the Light Blue colourway of the phone for review and to cut a long story short, the device looks downright stunning. Now, I could be preaching to a choir here but I am particularly fond of the Galaxy A-series’ pastel colourways – the shade makes the phone stand out that much more. What’s more, the device employs a matte finish at the back, which keeps smudges and stains at bay too. Now, the handset doesn’t impart a luxurious in-hand feel but, at the same time, the device doesn’t feel cheap either. Thankfully, much like last year’s model, the Galaxy A53 5G is also IP67 certified, meaning the phone can survive a drop in the pool or your bathtub. 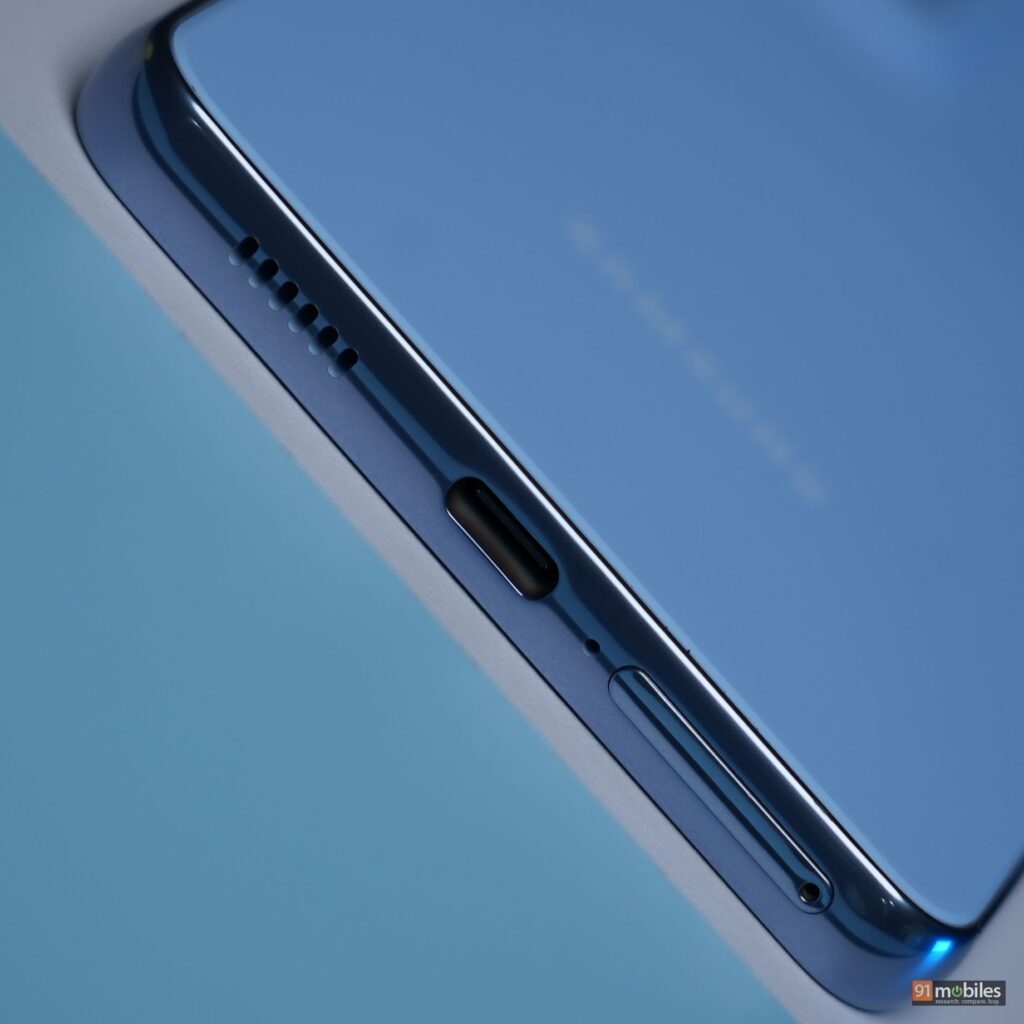 On the flip side, the smartphone doesn’t ship with a headphone jack, which is a bit disappointing. Be that as it may, the handset’s stereo speaker setup gets quite loud for watching movies and videos on the go. What’s more, the phone’s capacitive fingerprint sensor is extremely snappy too, although the device’s facial recognition tech can be optimised to perform a tad better in lowlight scenarios. As things stand, the unit takes a hot minute to scan a user’s face in dimly lit environments. 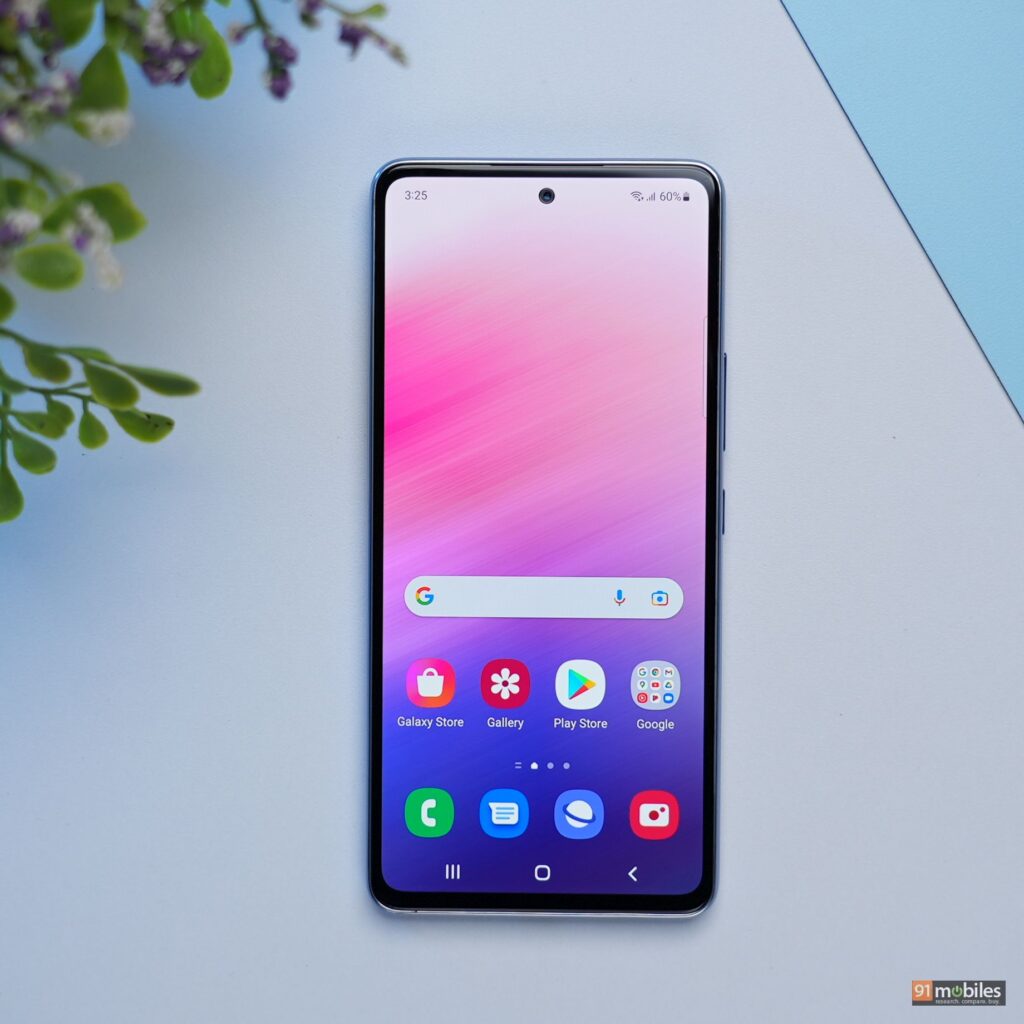 As for the display, the Galaxy A53 5G utilises the same 6.5-inch, FHD+, Super AMOLED screen as seen on the Galaxy A52s from last year. To the brand’s credit, the A53 5G’s screen is a feast for the eyes and buyers opting for the set will be greeted with vibrant hues. What’s more, the display refreshes at 120Hz as well and touts fantastic viewing angles too. Coupled with the panel’s tiny punch hole notch, you could make the argument that the Galaxy A53 5G is among the better phones to binge through your favourite TV shows or movies. 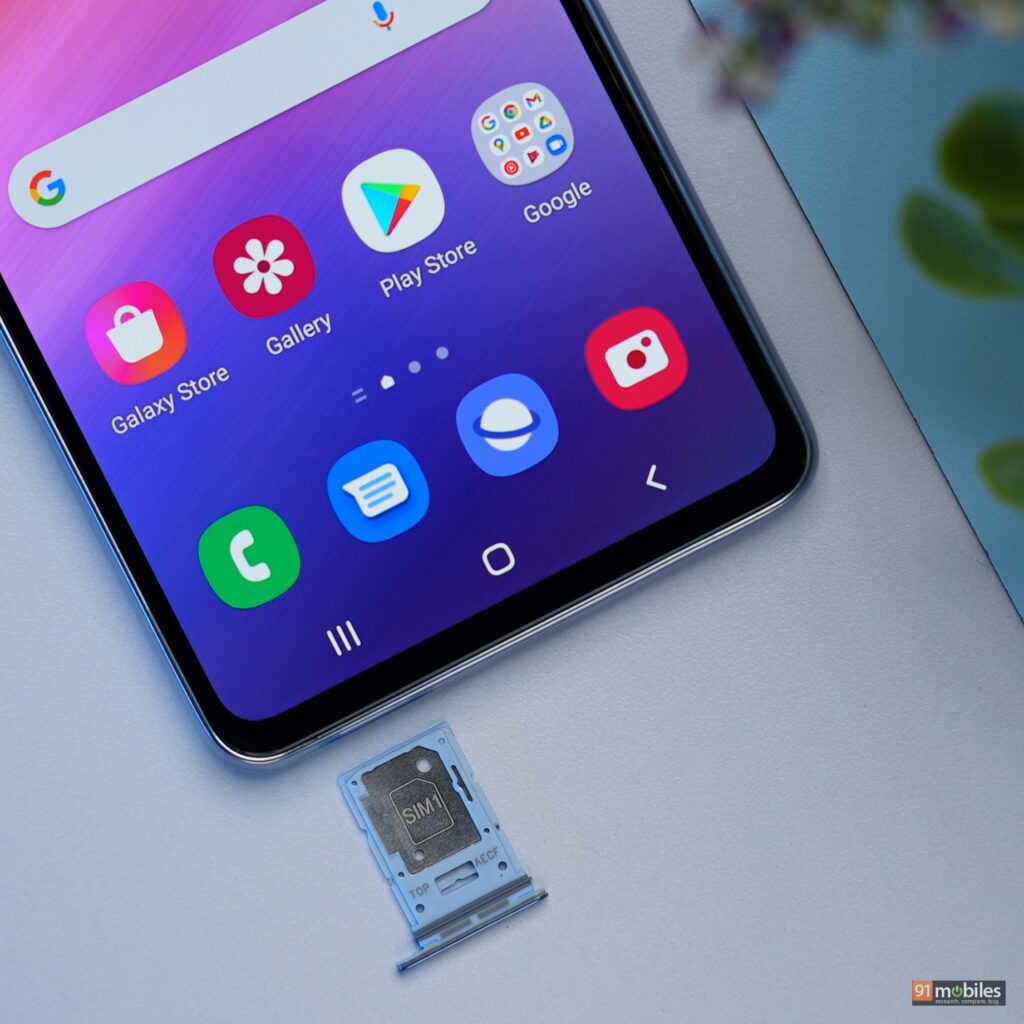 Unfortunately, much like its predecessor, the handset cannot stream HDR content from OTT services like Netflix. That’s quite disappointing, seeing how phones priced much less can relay HDR media seamlessly. On the bright side (no pun intended), the display offers a satisfactory peak brightness level of 800 nits, thereby ensuring prospective buyers can comfortably use the phone, even under the sun. 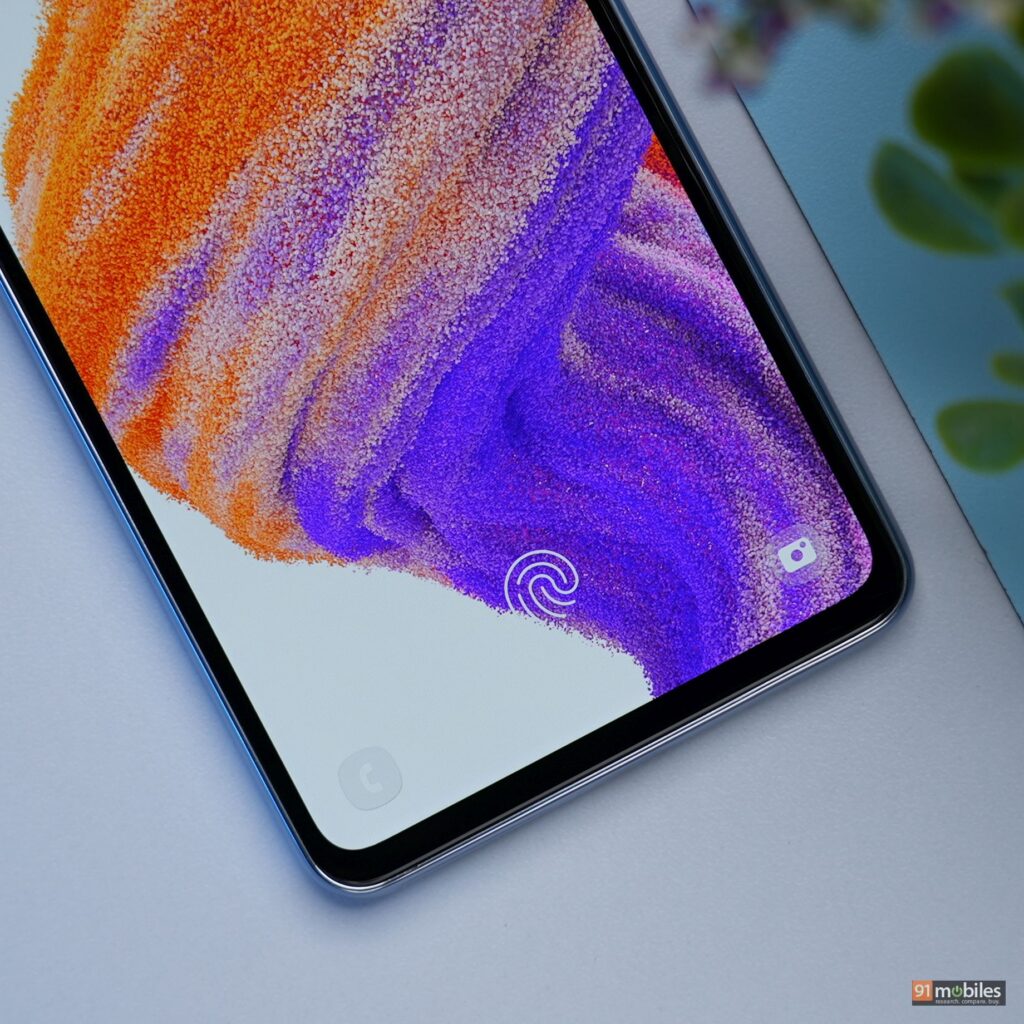 Coming to the meat of the matter, the Samsung Galaxy A53 5G is the first phone in the country to employ Samsung’s brand-new Exynos 1280 octa-core processor. Now, the Galaxy A53 5G is a capable performer and the handset is more than adept at handling day to day tasks like surfing the web or browsing through various social media apps. That said, the smartphone’s performance is inferior to the Galaxy A52s launched a while ago. To wit, the A52s, which, by the way, is backed by Qualcomm’s Snapdragon 778G processor, benched higher in numerous synthetic testing apps like Antutu and GeekBench. Furthermore, the device could run graphically intensive titles at better graphics and FPS settings too. As an example, in BGMI, the Galaxy A53 5G capped out at HD graphics and High FPS. Making matters worse, the smartphone cannot run the game at Ultra or Extreme FPS preset even with the graphics set to the ‘Smooth’ quality.

On the other hand, the Galaxy A52s can run the game at HDR and Ultra or Smooth and Extreme FPS settings respectively. Now, credit where credit’s due, the Exynos 1280 SoC powering the Galaxy A53 5G doesn’t throttle, which is evident by the phone’s CPU Throttling test result as well. That said, buyers looking for a performance-focussed device will find no shortage of better-equipped devices in the market. In fact, the iQOO 9 SE, which retails for around the same price, can offer much better performance thanks to its Snapdragon 888 processor. As for the battery backup, the Galaxy A53 5G’s 5,000mAh cell will easily last users a full day off a single charge. That said, Samsung is no longer furnishing a wall charger with its affordable devices, so you will have to purchase a fast-charging brick separately. 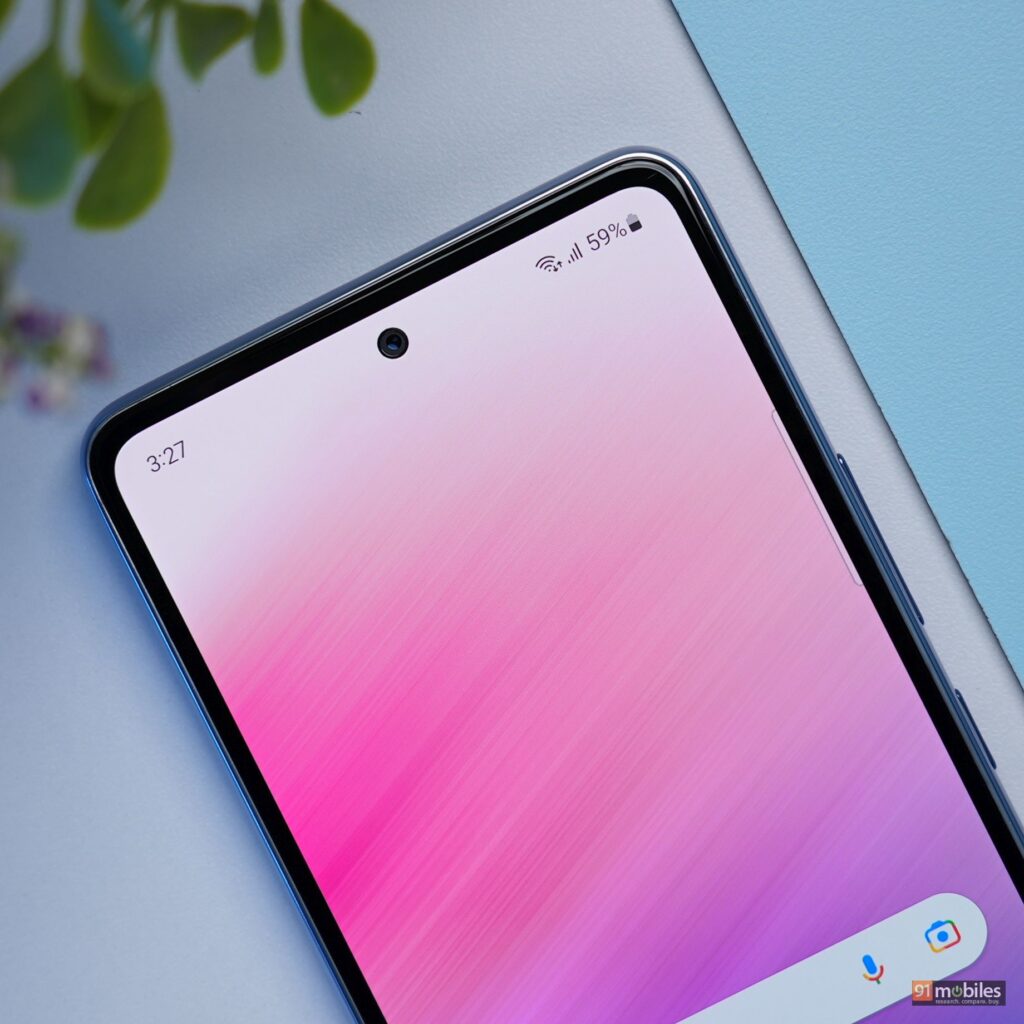 Thankfully, the Galaxy A53 5G is among the rare breed of smartphones to boot Android 12 from the word go. Now, I’ve covered the phone’s custom skin in-depth in my full review of the Galaxy A52s, so do check it out if you want more insights on the firmware. Interestingly, Samsung is guaranteeing four major OS updates with the device, so you will be able to experience the best from Android for years to come. 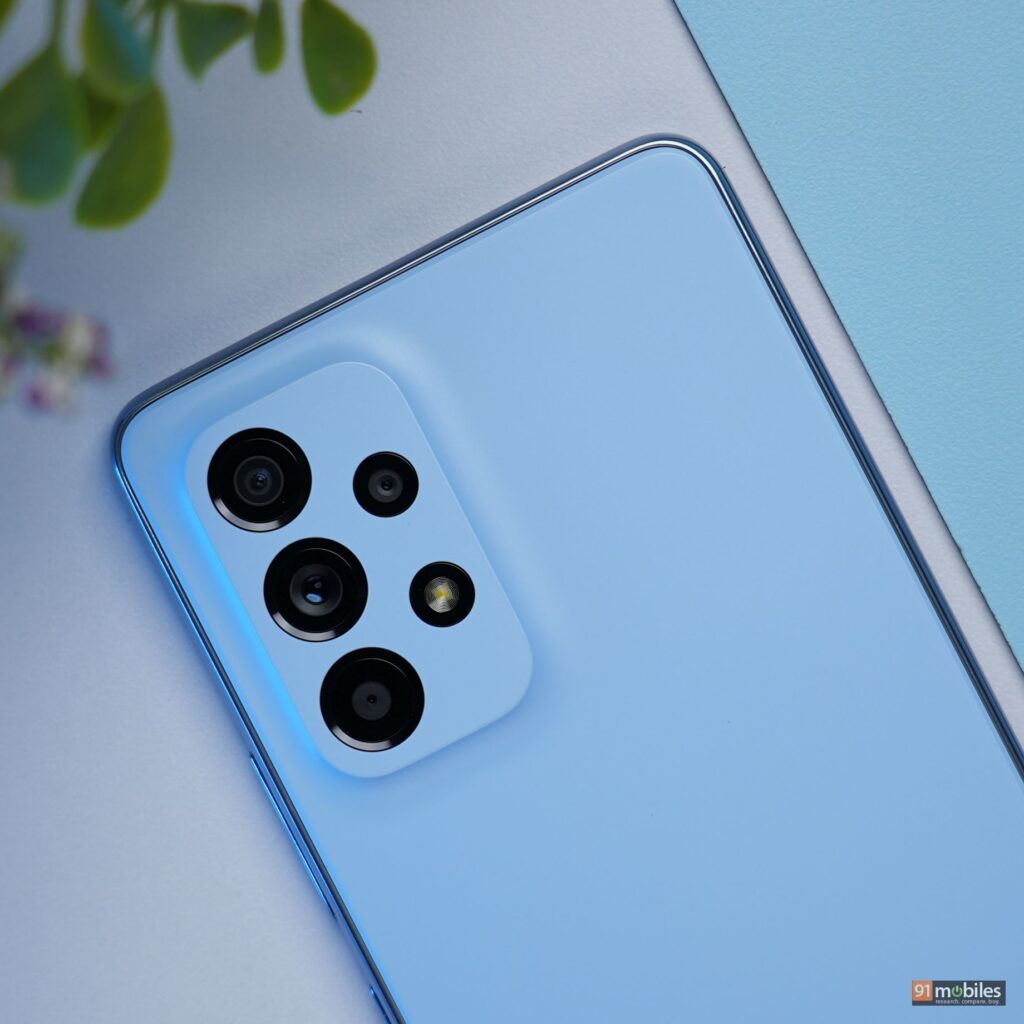 Camera-wise, the Galaxy A53 5G uses the same stack that you might’ve seen on the Galaxy A52s 5G. In particular, the smartphone features a 64MP main sensor that works alongside a 12MP ultra wide-angle lens, a 5MP macro sensor and a 5MP depth sensor. For selfies, the device gets a 32MP snapper up front. 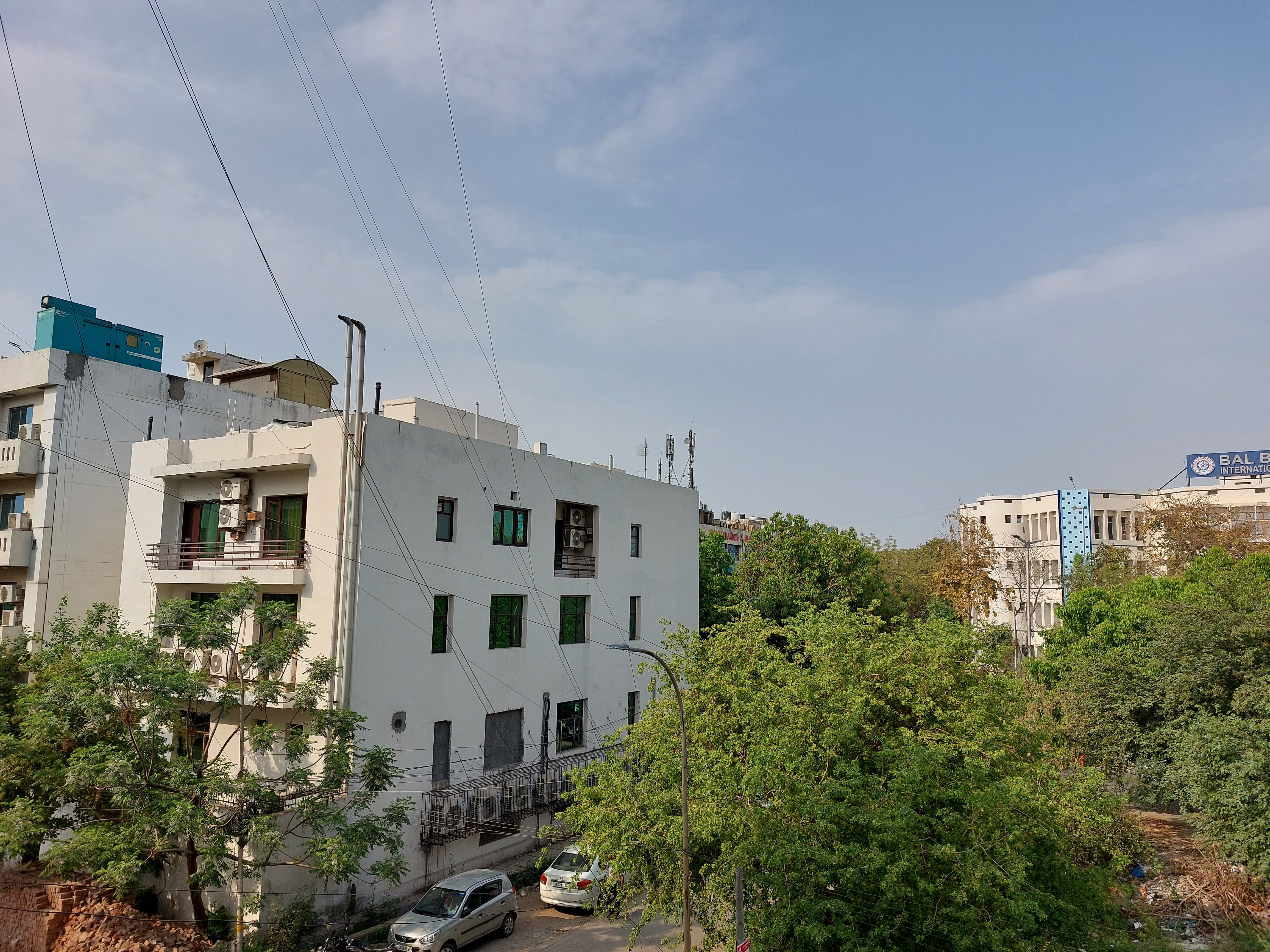 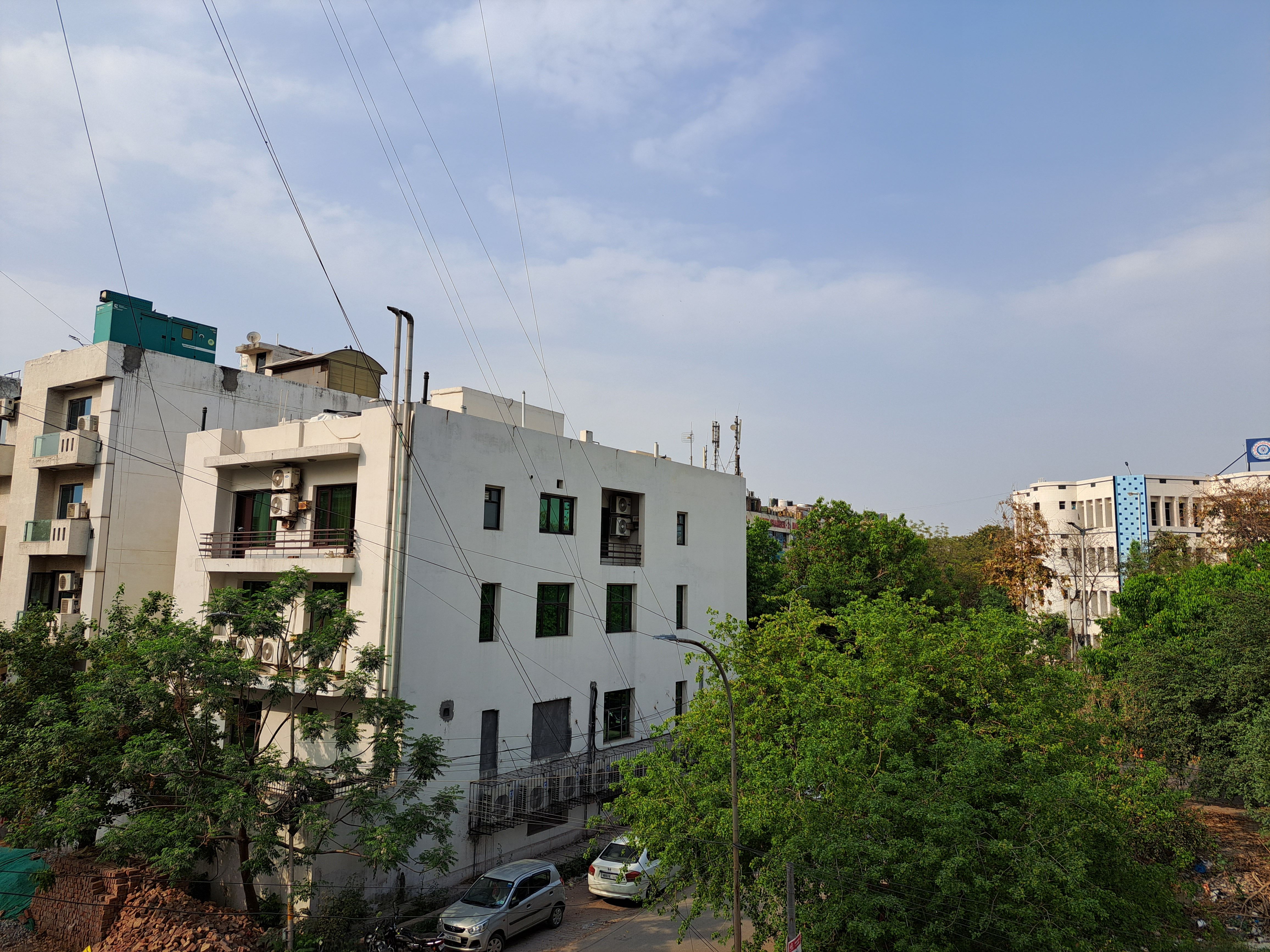 Unsurprisingly, the Samsung Galaxy A53 5G clicks very similar photos to the Galaxy A52s 5G. That said, I found the output from the latter a bit more to my liking. As an example, if you take a look at the slider attached above then here, the Galaxy A52s has reciprocated the scene more accurately. The Galaxy A53’s image, while just as detailed, offers slightly saturated tones. The same is evident if you look at the leaves in the frame, which appear more punchy in the A53’s shot. Other than that, though, the images are neck and neck. 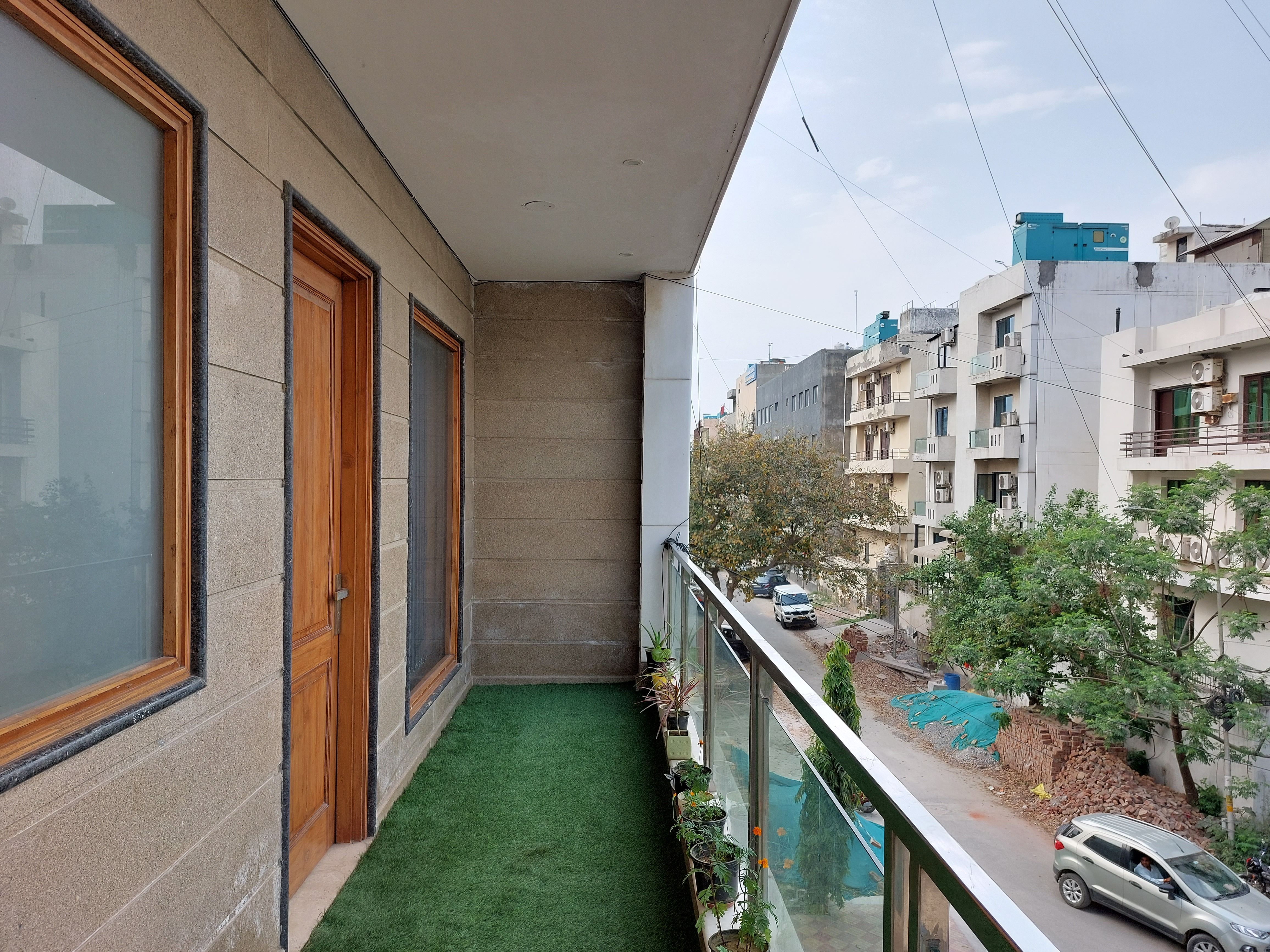 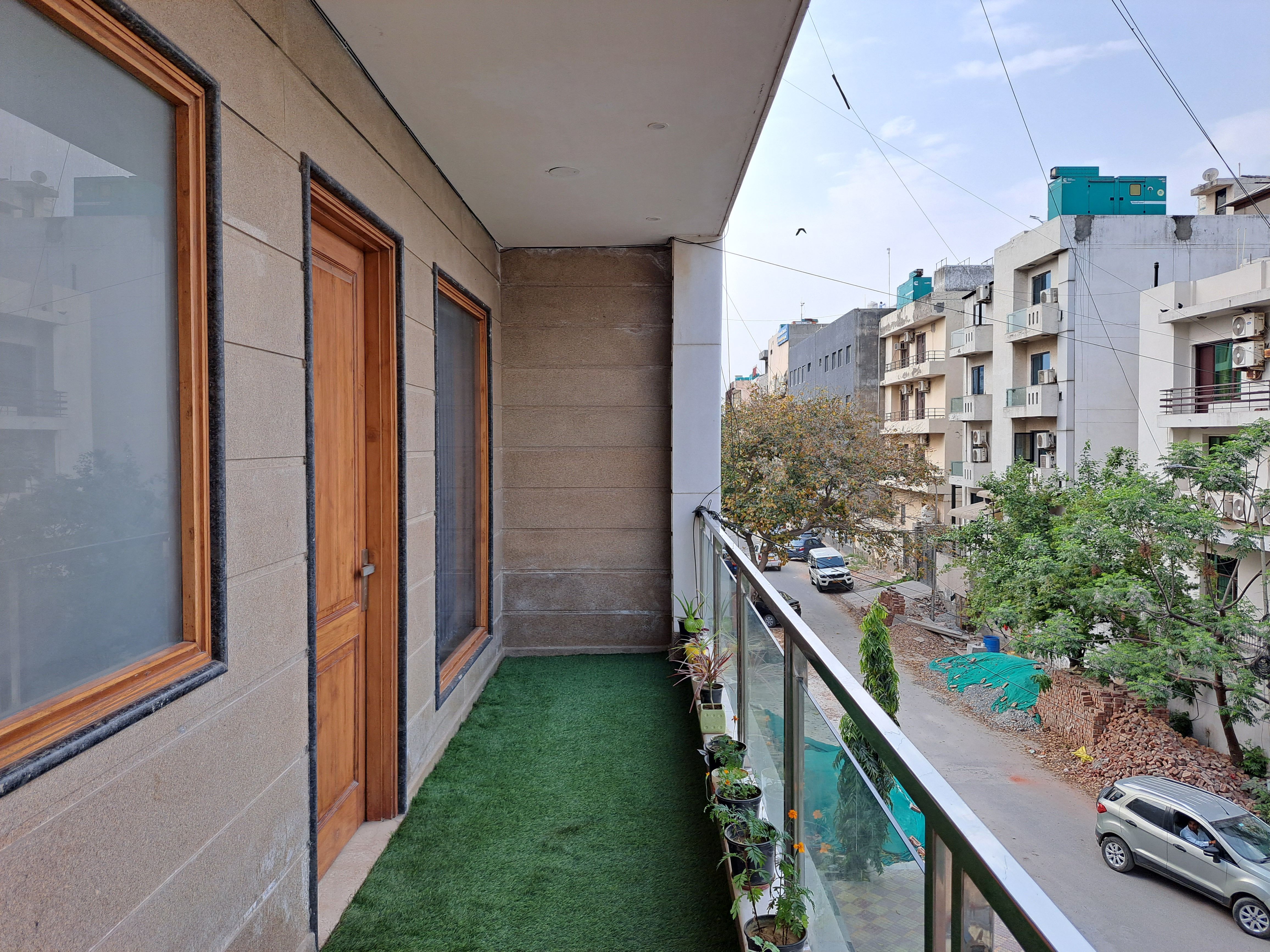 Here’s another example – in this next HDR shot of the apartment complex adjacent to our office, you can tell that the red colour of the bricks appears more natural in A52s’ photo. Barring that, however, both the phones have outputted a detail-laden scene with excellent dynamic range. 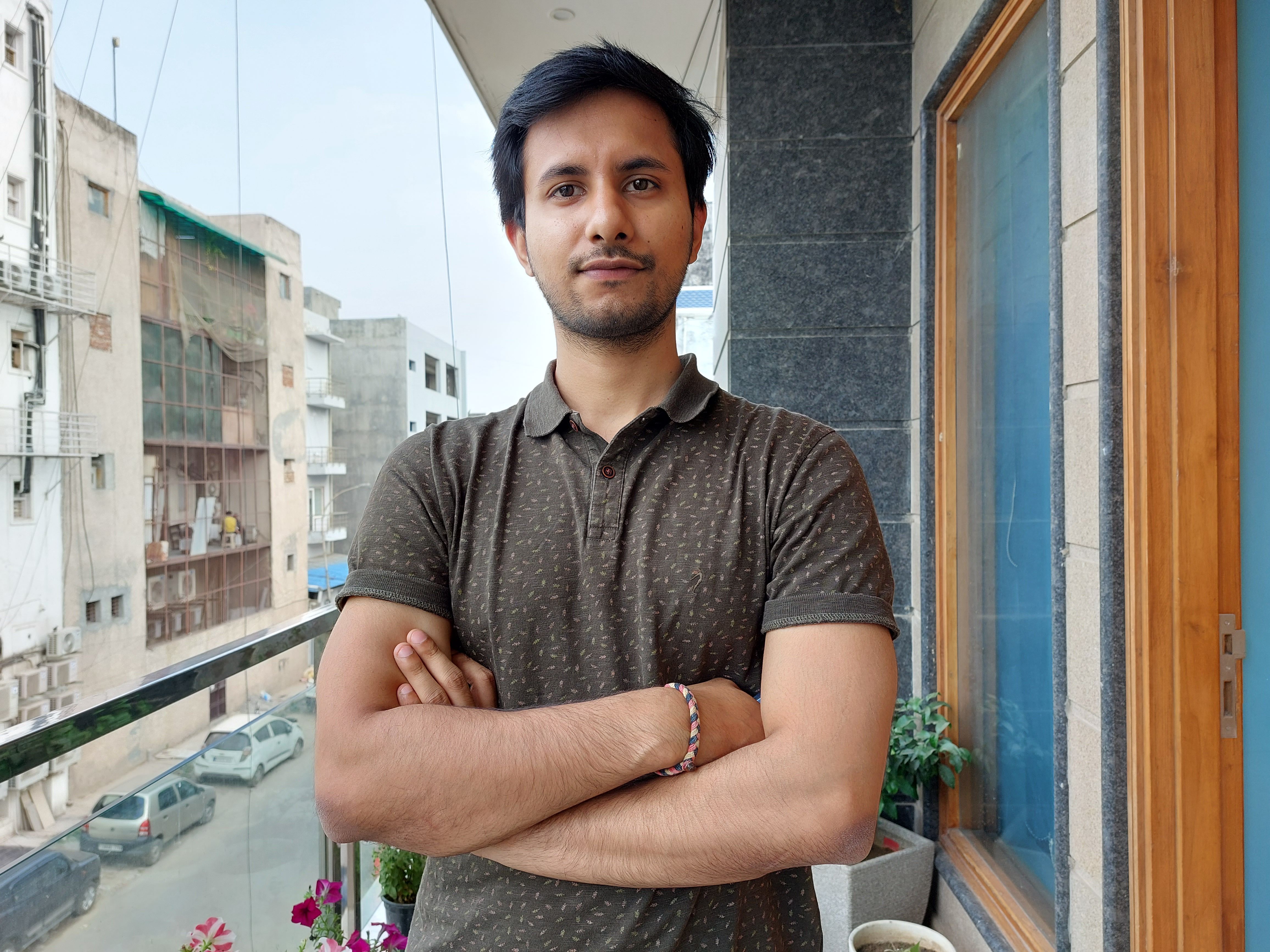 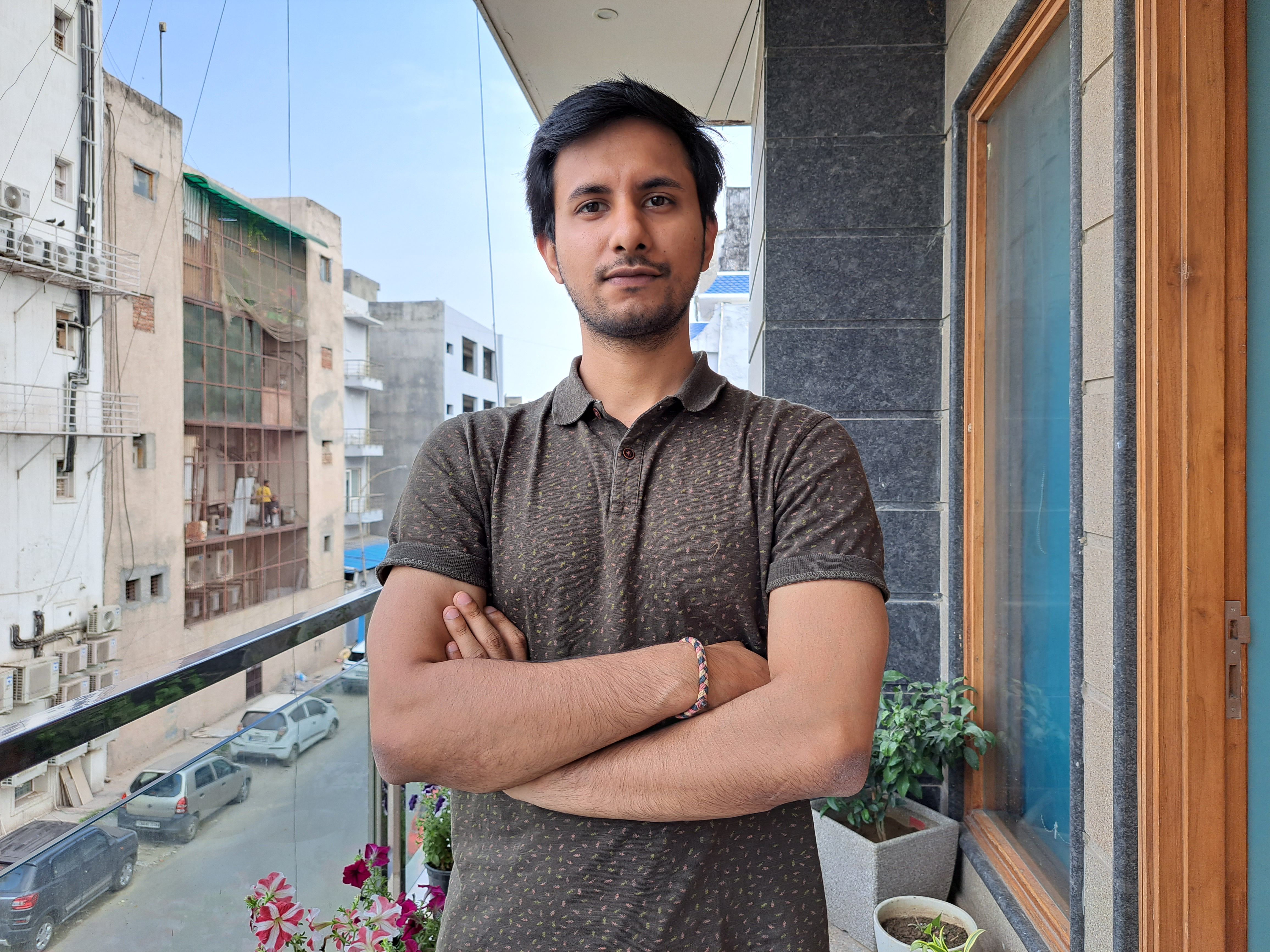 The scenery remains unchanged for human subjects too. In fact, if you pay attention to the slider attached above then here, you can tell that my skin tone looks more authentic in the A52s’ shot. The A53’s composition has rendered my face and arms slightly orangish. On the bright side, both the phones have lit up the subject reasonably well, and that’s despite clicking the photos against the source of light. Furthermore, the handsets have retained a significant amount of detail in the background too, which is great. 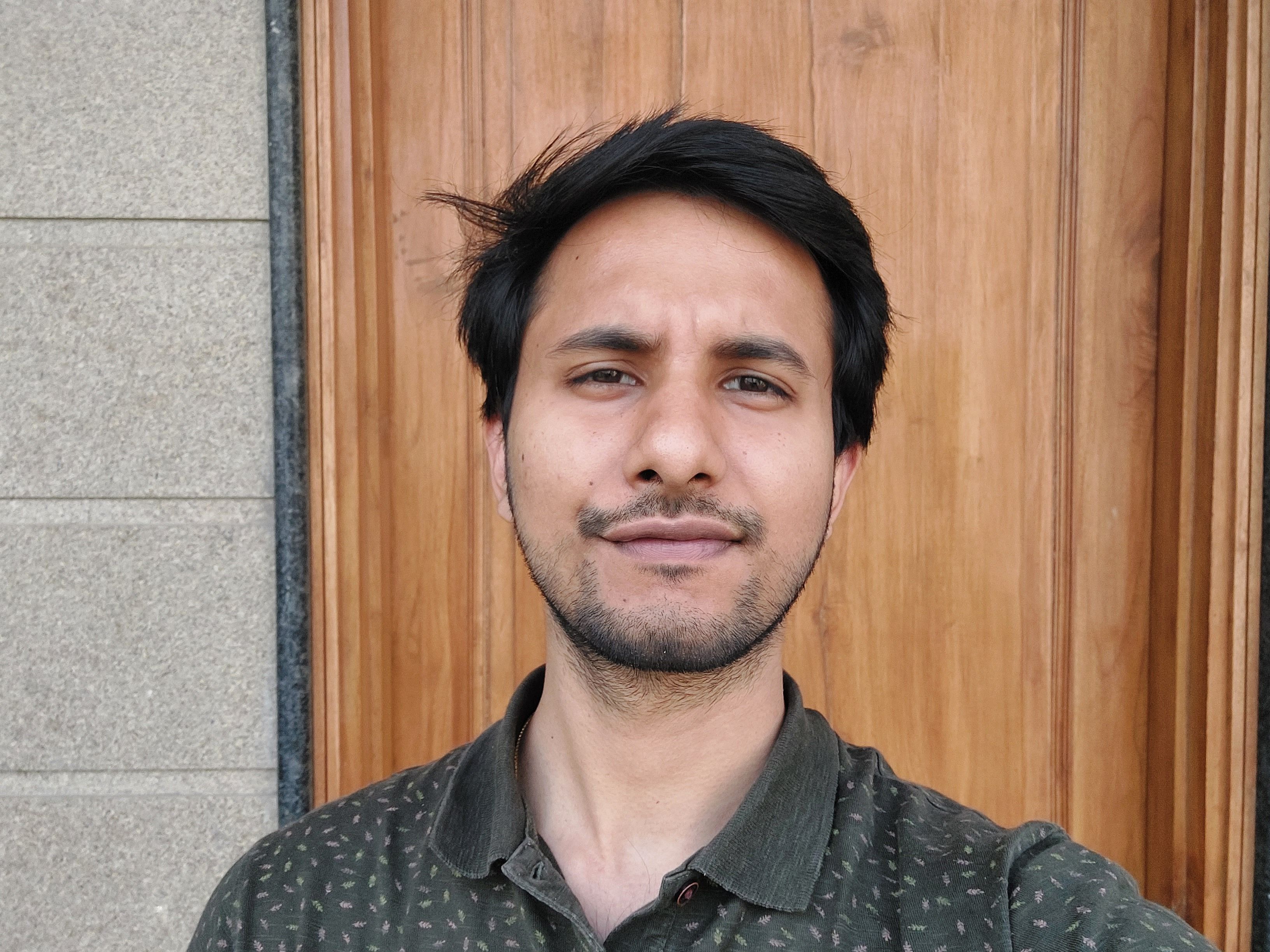 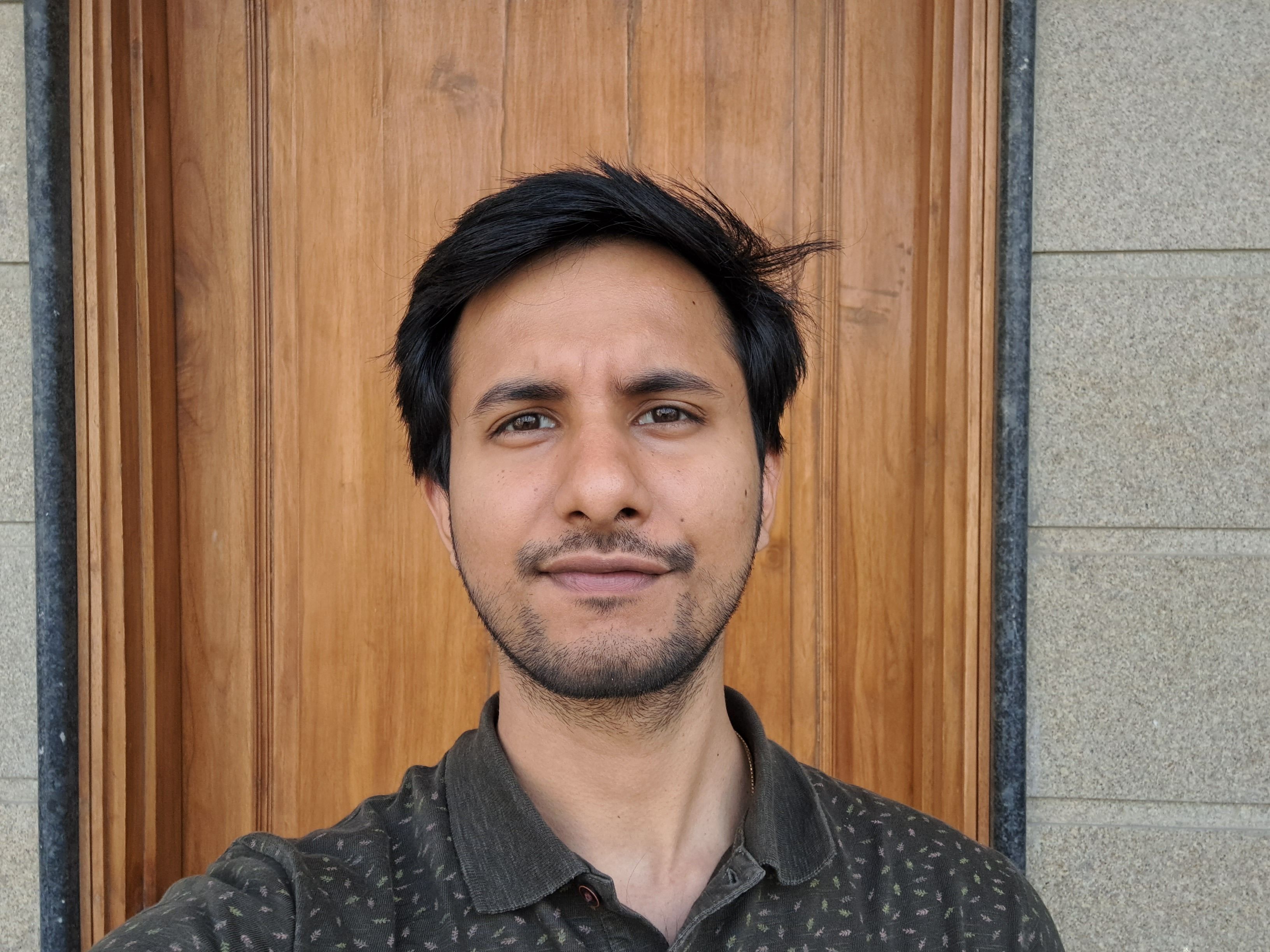 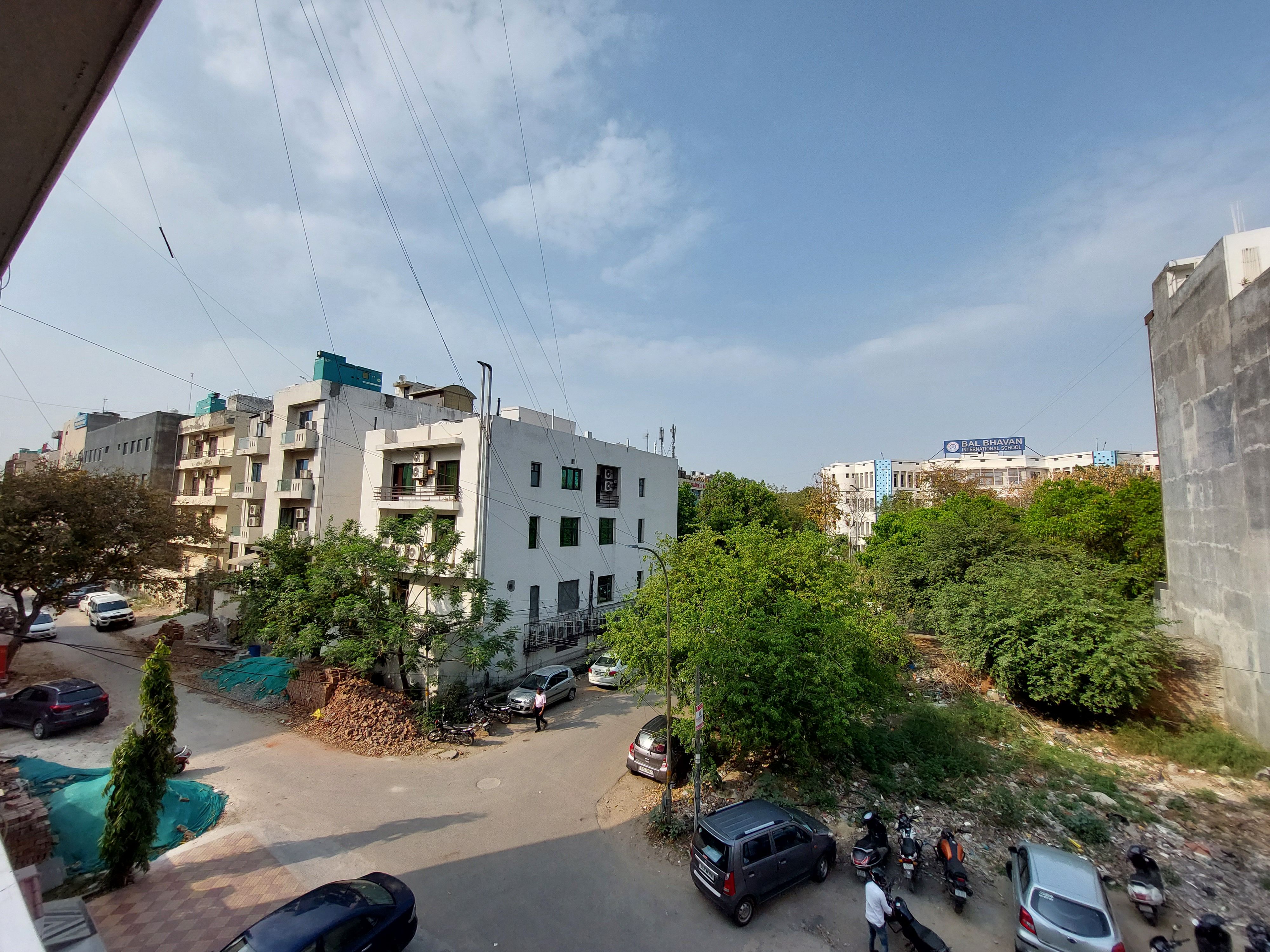 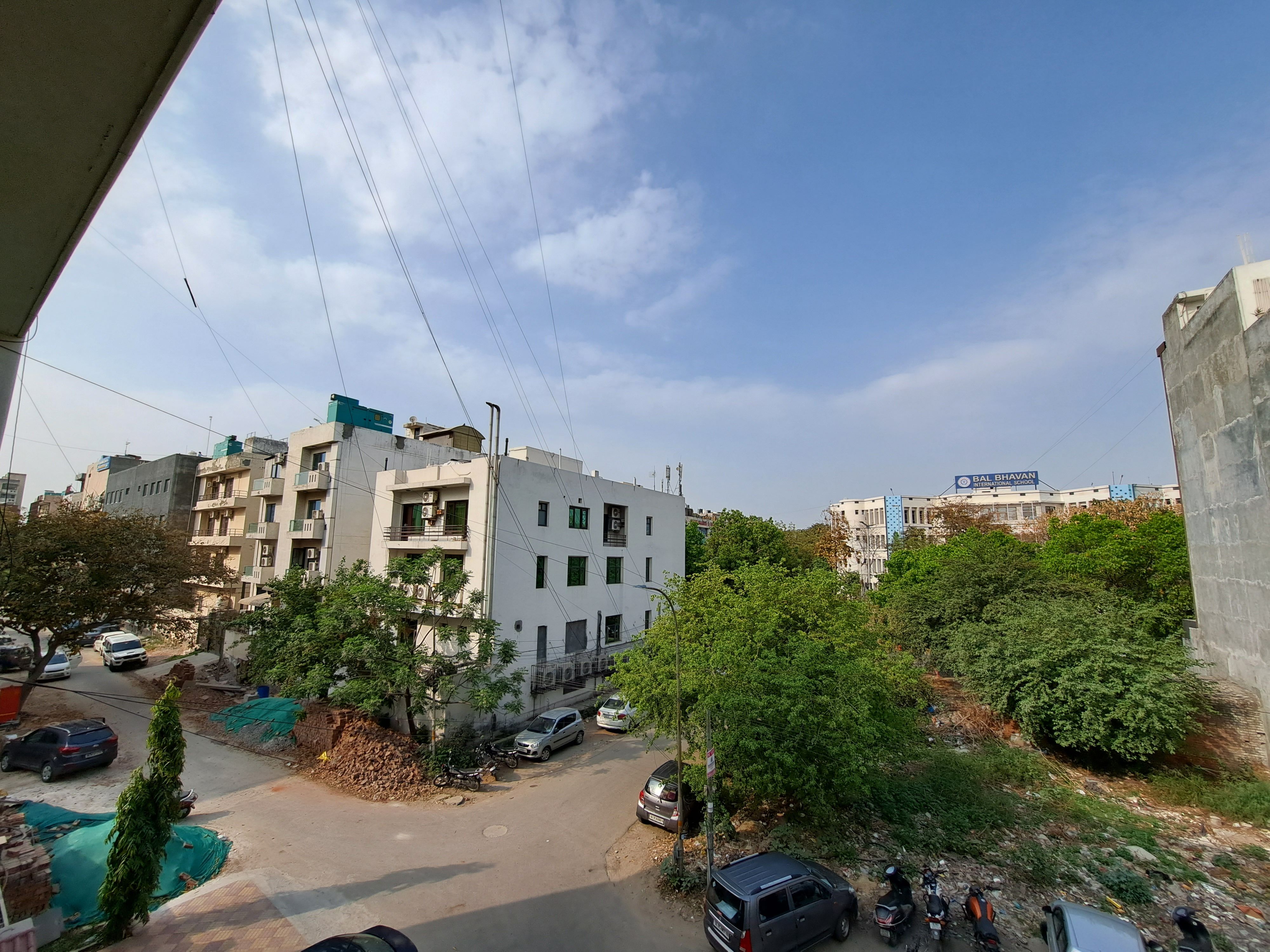 The same goes for the wide-angle images from the two phones too, which offer identical corner details and sharpness around the centre of the frame. You can refer to the slider attached below to get a clearer picture (pun intended). 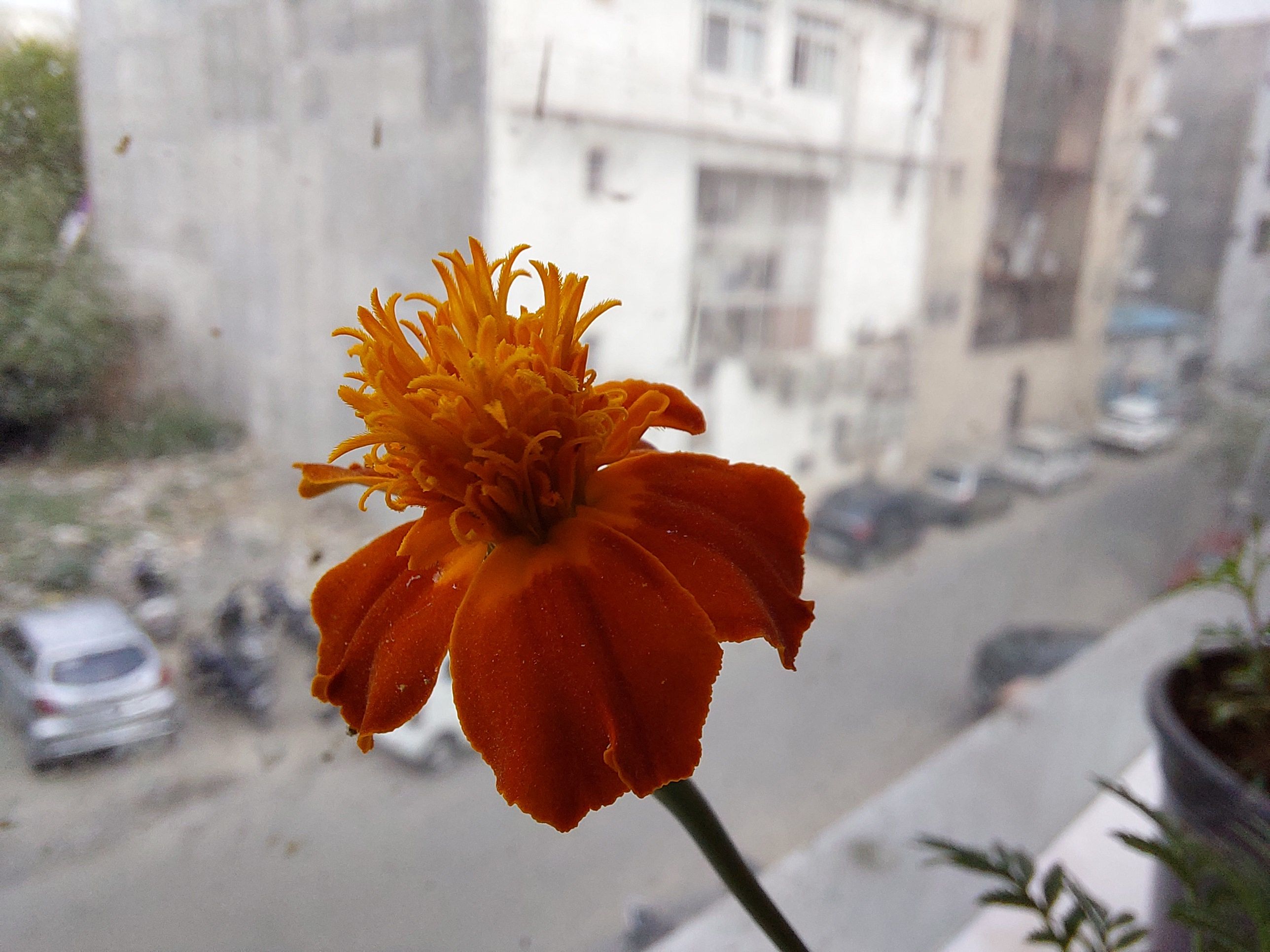 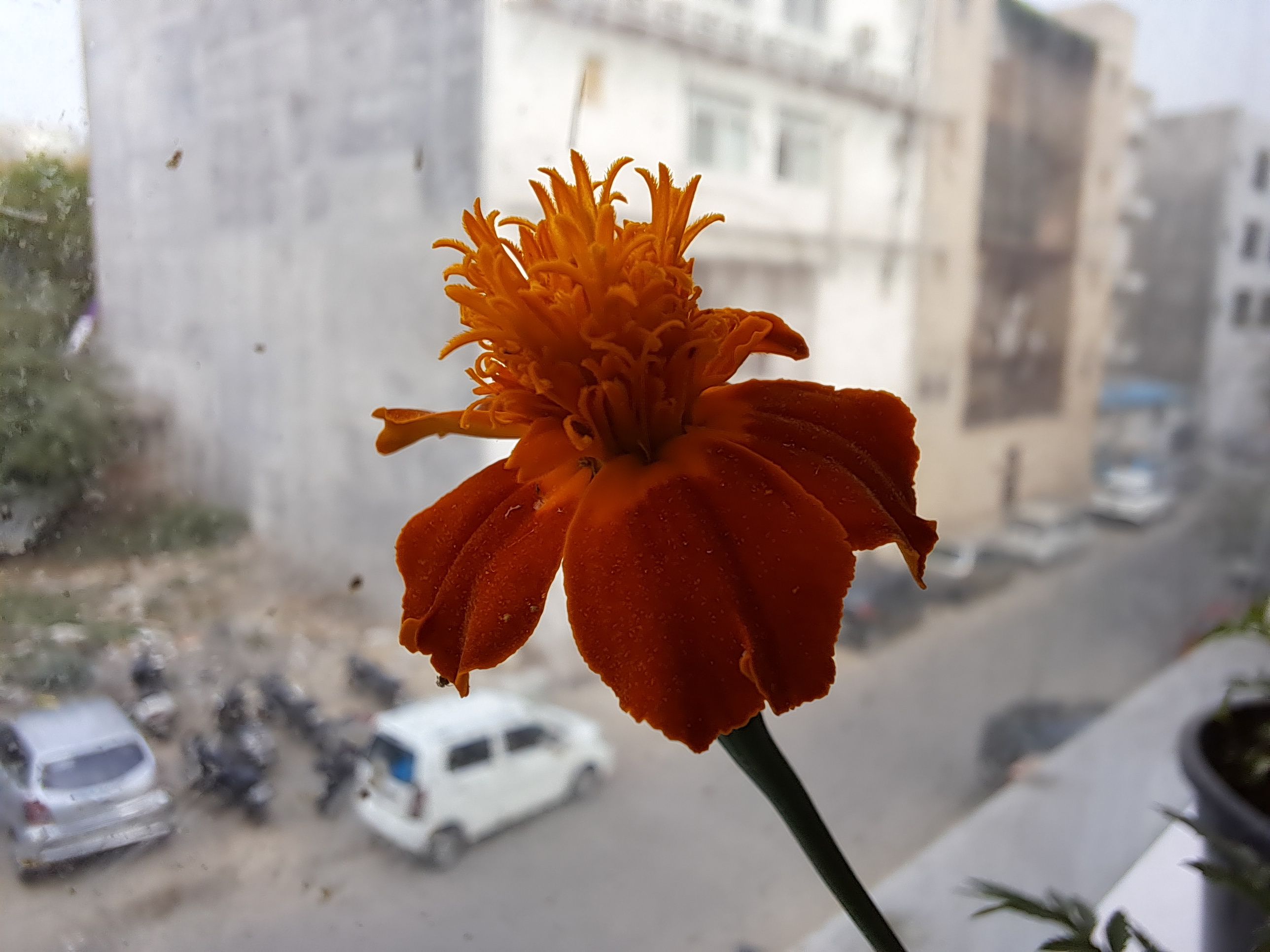 As for macros, I found the Samsung Galaxy A52s’ image slightly better. You see, both the phones are equally quick to latch focus on to the subject, however, I noticed that the A52s could squeeze a bit more details out of the shot. For instance, in the slider above, you’ll notice that the centre of the flower offers a better definition in the A52s’ photo. 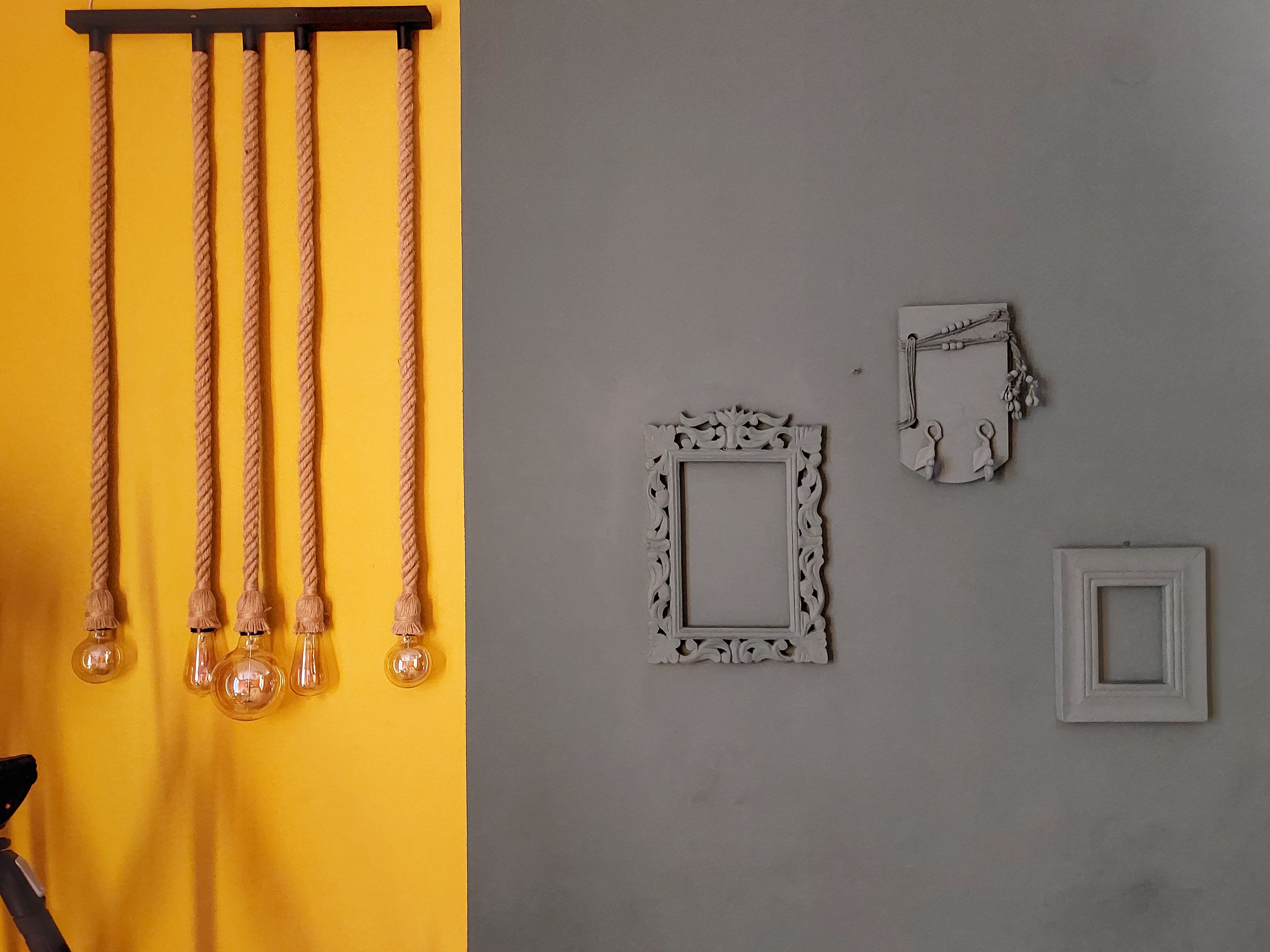 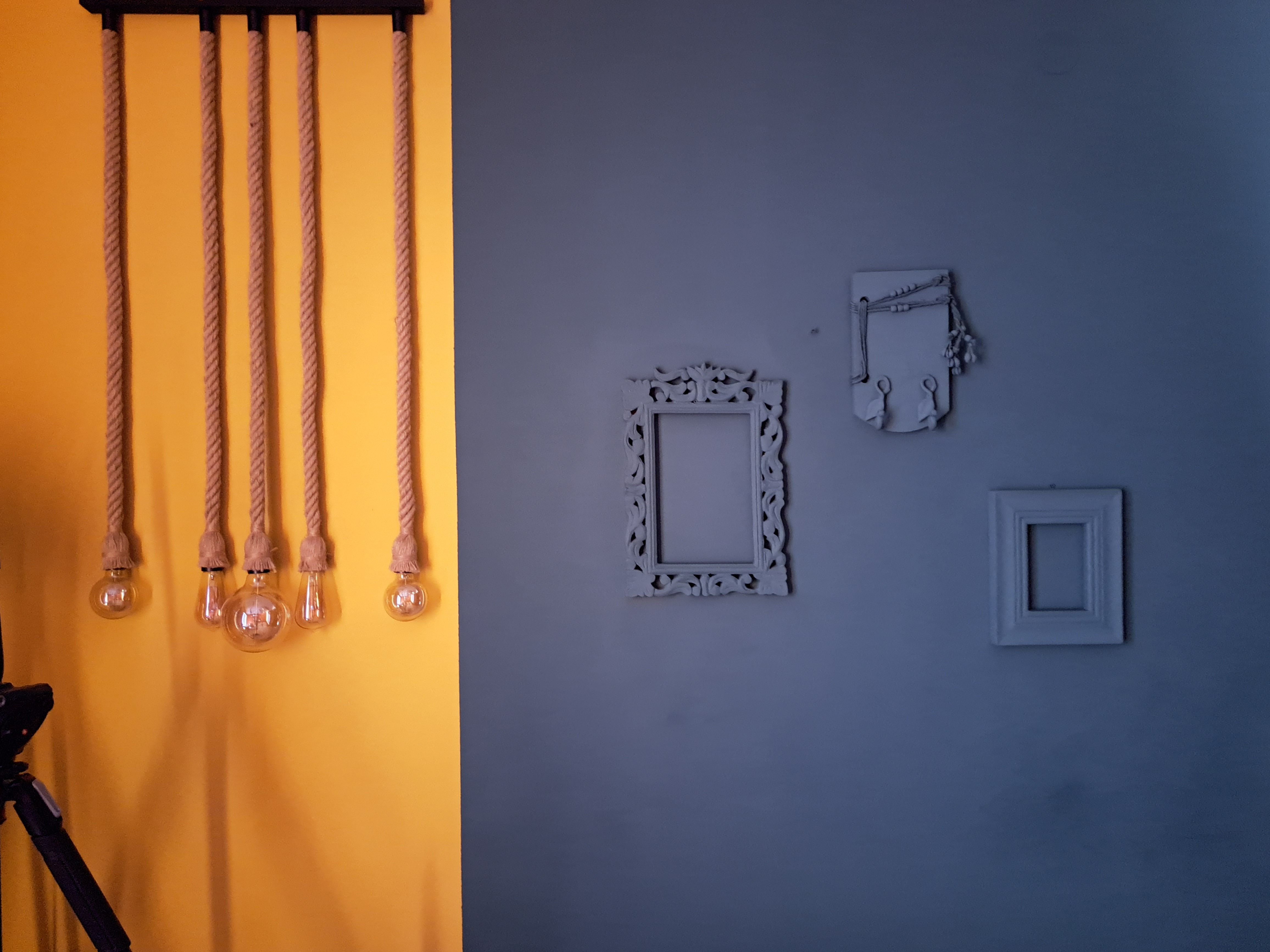 Lastly, let’s take a look at the night mode shots from the duo. Here, both the phones output a serviceable image, however, the colours are reproduced much better through the A52s’ lens. Case in point, the grey backdrop in our studio appears blue in the Galaxy A53 5G’s image. What’s more, objects in the frame appear sharper in the A52s’ snap too. On the whole, the Samsung Galaxy A53 5G will undoubtedly impress you with its photography chops. That said, the Galaxy A52s is still a commendable camera phone months after its launch and the device can give Samsung’s latest a run for its money.

The Samsung Galaxy A53 5G retails for Rs 34,499 in India and for the price, brings a handful of compelling features to the table. For one, the phone offers a capable set of cameras that can click delightful pictures come night or day. The unit performs well too, and the smartphone’s beefy cell can outlast a user’s longest binge sessions as well. With that said, everything the Galaxy A53 5G can do, the Galaxy A52s 5G does better. What’s more, the market is flush with high-performance devices that’ll be better suited to those who tend to game a lot on their phone as well. Be that as it may, buyers looking for a good-looking mid-ranger that will run the latest version of Android for years to come can bank on the Galaxy A53 5G.