The Samsung Galaxy A80 (first impressions) is a strange beast. On one hand, it seems pretty innovative with its pop-up and twist cameras, and being part of the A series, follows the strategy the brand has devised. On the other, its real-world capabilities and pricing seem perplexing, for want of a better word. Join me as I try to figure out what the Galaxy A80 is, and what it could have been. 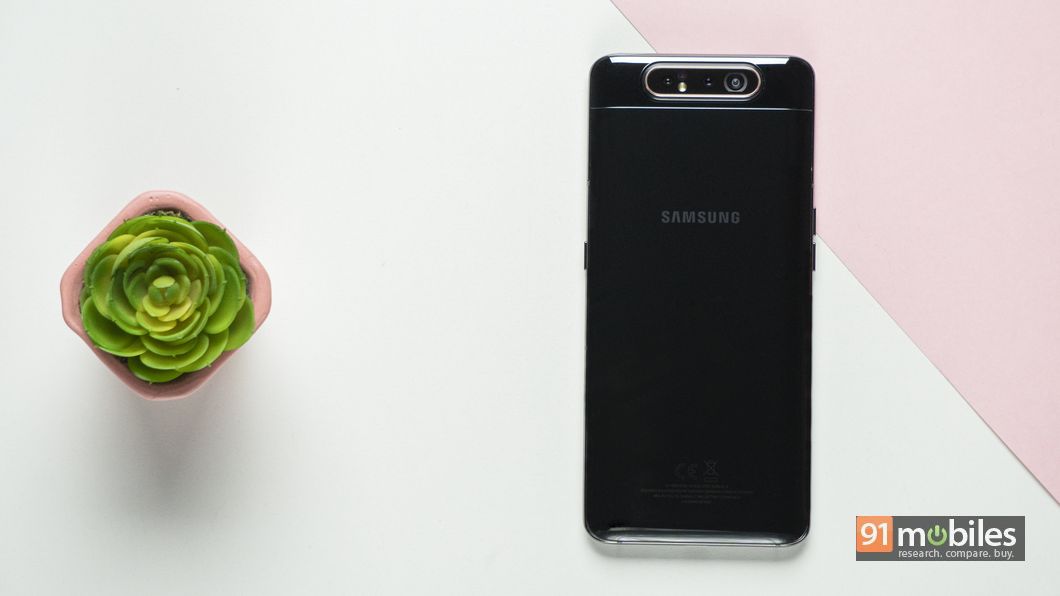 The Galaxy A80 is pretty unique, all thanks to its triple cameras that pop up and rotate to face the front, effectively making the rear shooters double up as selfie snappers too. So far, we’ve seen Samsung shave off bezels from its smartphones by taking the notched display route, with its Infinity V and Infinity O implementations. The Galaxy A80 takes a different route though, and offers what Samsung calls the New Infinity Display, promising a distraction-free usage experience without resorting to a notch. 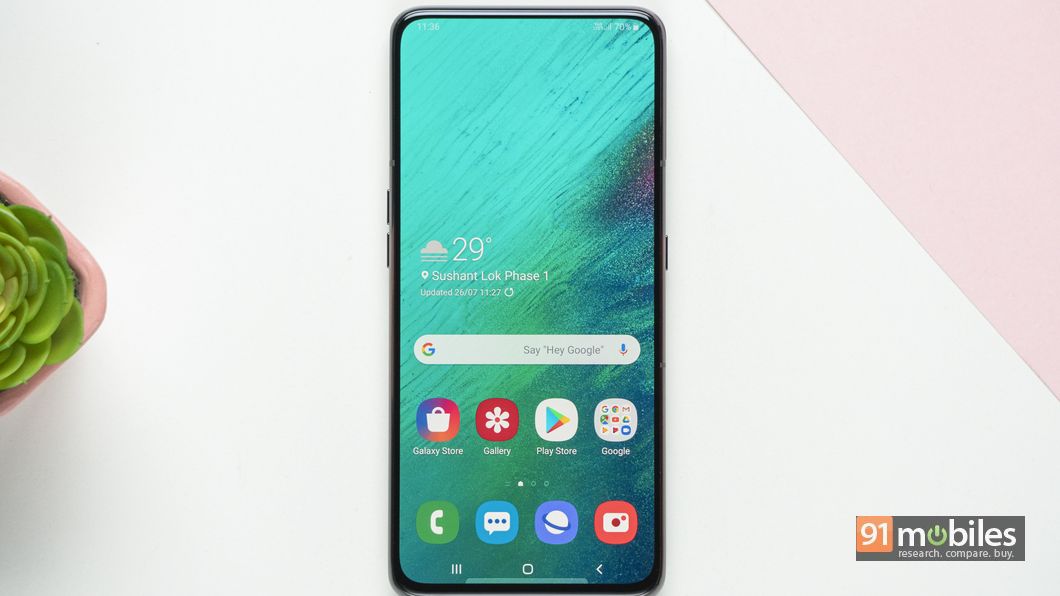 The glass-clad phone is certainly quite large and heavy, with the 6.7-inch FHD+ display taking centerstage at front. The Super AMOLED display with 20:9 aspect ratio is very capable too, offering vivid colours, deep blacks, ample brightness levels and wide viewing angles. The immersive experience is further accentuated by the fact that there’s no earpiece either. The phone uses screen sound tech to relay call audio, with the result that callers tend to sound a tad hollow and the volume seems low as compared to phones with regular earpieces. There’s an in-display fingerprint sensor, with the power key placed on the right spine and volume keys on the left.

The top of the phone is barren, while the bottom holds the dual-SIM tray, a USB Type-C port, and the speaker. Switch to the rear, and all you’ll see is the Samsung branding and the large camera module on top. Worth mentioning that the Galaxy A80 doesn’t offer a memory expansion slot, so you’re stuck with the 128GB storage built in. There’s no 3.5mm audio jack either, and while you don’t get a Type-C to 3.5mm dongle in the box, you do a pair of wired earphones that feature a Type-C connector. 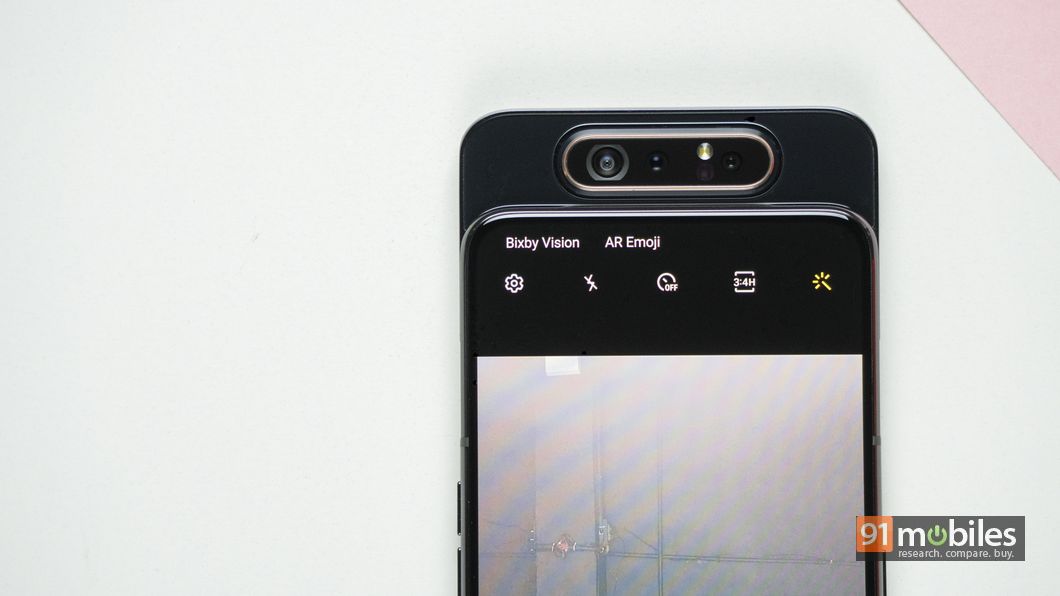 Coming to its headlining feature, the Galaxy A80 boasts a special mechanism for its pop-up cameras. The camera module utilises an innovative teeth, rail and hook mechanism that requires only one motor. So when you switch to the front shooter in the camera app, a small portion of the phone’s back panel holding the camera module slides up, and the oval-shaped module rotates to face the front in one seamless motion. While the movement isn’t really the fastest we’ve seen till date, it’s not agonisingly slow either. Disappointingly though, the phone doesn’t offer a face unlock feature, so you’re stuck with the in-display fingerprint scanner for authentication. Moreover, said fingerprint scanner is a tad iffy too, and not the most accurate or fastest out there.

The triple rear camera setup, which is also the triple front camera setup in the Galaxy A80’s case, comprises a 48MP f/2.0 Sony IMX 586 sensor, along with an 8MP ultra-wide f/2.2 sensor and a 3D depth ToF sensor. Available shooting modes include Live focus (for bokeh), Pro, Night, slow-mo and hyperlapse, among others. There’s a super slow-mo mode as well, and the shooter can record 4K videos as well. There’s an HDR option hidden inside camera settings, and you also get Scene Optimiser for automatic optimisation of shots based on the scene.

On paper, these specs and features look great, especially when you consider that the same setup can be used for regular photography as well as for capturing selfies. And the Galaxy A80 does deliver, especially in daylight shots. Images captured in daylight look good across different shooting scenarios, including landscapes, close-ups etc. That said, there’s visible loss of detail when images are zoomed in, and subjects like foliage, when shot from a distance, occasionally appear mushy. The live focus mode churns out decent images though, and even allows you to change the level of background blur, and post shooting, add various effects. Having a wide-angle option can be really useful, but there’s distortion visible on the sides. And when it comes to low light, the results are acceptable, but again, the detail seems to be missing. Using the night mode does help to some extent, but you need to keep your hand really steady to avoid blurry images.

Samsung Galaxy A80 camera samples
1 of 16

In theory, the same analysis should apply to selfies too, since the same camera setup handles shooting at the front as well. Inexplicably, Samsung chose to disable the autofocus when the camera flips to the front initially. However, a recent software update has enabled autofocus for the selfie mode, and post that, the output quality for shots captured with the snapper facing the front has improved. You get both live focus as well as wide-angle options for selfies, and again, the images look good as far as the light conditions are good, but fail to impress in low light. In yet another baffling move, the Galaxy A80 takes the screen flash route to illuminate selfies (if you’ve enabled the flash), and ignores the LED flash which is part of the same camera module that twists to face the front.

As far as the software is concerned, you get Samsung’s OneUI with Android Pie, complete with the usual frills such as Bixby, Samsung Pay, support for themes, and Digital wellbeing. The set of preloaded apps also sticks to the norms, with apps from Samsung, Microsoft and the standard fare from Google, along with others like Spotify and Netflix. I won’t go into too many details here, but it’s worth mentioning that Samsung’s ecosystem of apps and services is quite nice, once you get into it properly, and apps like Samsung Pay, Samsung Pass and Samsung Health are handy. 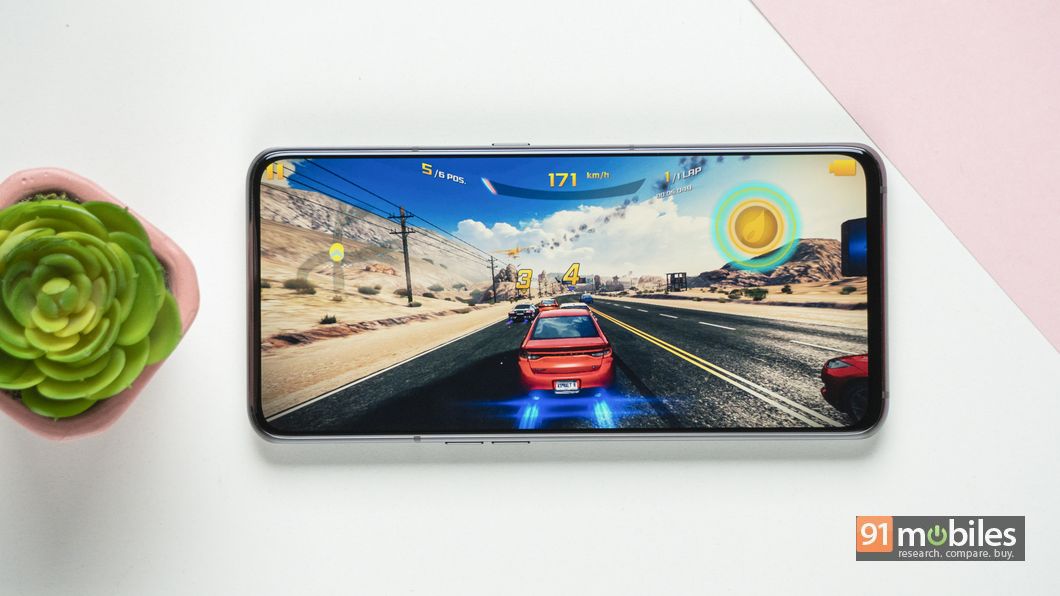 Performance is taken care of by the new Snapdragon 730G chipset, which is mated to 8 gigs of RAM and 128GB non-expandable storage. In fact, the Galaxy A80 is the very first phone in India to come with this chipset. The Snapdragon 730G is the tweaked version of the SD 730 chip we first saw in the Redmi K20, and features improved graphics. No wonder then that the A80 can handle intensive gaming with relative ease, and games like PUBG run smoothly even on high graphics settings. Day-to-day tasks and multitasking isn’t a problem, and usage remains smooth.

The 3,700mAh battery may not sound as powerful as the higher rated ones many phones come with these days, but provides enough juice for you to eke out a full working day with medium usage. As always, your mileage could vary depending upon use, but based on real-life usage and the PCMark battery test result of 8 hours 37 minutes, I can vouch for the phone’s solid battery life. The battery supports 25W fast charging, so can be juiced up pretty quickly too. 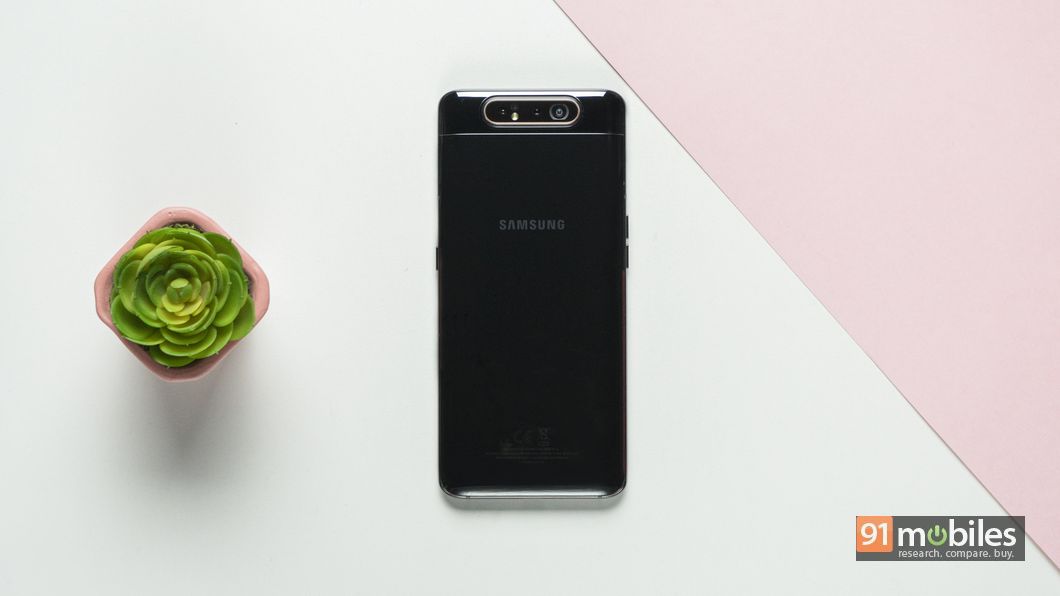 Did I mention that the Galaxy A80 is a strange beast? Stranger things (pun intended) have happened in the smartphone world before, no doubt, but the price tag of Rs 47,990 for this device certainly seems baffling. You see, that pricing puts it into premium territory and takes it very close to Samsung’s own S series range of flagship smartphones. Sure, the pop-up twist camera is a twist in the tale, but this innovation alone may not be enough to justify the A80’s high price tag, especially if you look at other innovative smartphones such as the ASUS 6Z (review) and the OPPO Reno 10x Zoom Edition (review). Both these devices have their own unique take on camera-related and bezel-less display innovation, sport the more powerful Snapdragon 855 chipset, and in general, offer more bang for the buck. Speaking of bang for the buck, the OnePlus 7 Pro (review) is also a very worthy option in the same price range as the Galaxy A80. Basically, the Galaxy A80 needs improvement in its shooting capabilities and a price cut for it to appear as a compelling option. That said, those pop-twist shooters are great conversation starters, if that’s something that rocks your boat…