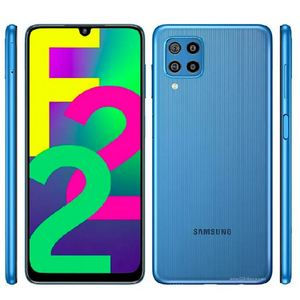 Samsung has revealed its latest smartphone called the Galaxy F23 which has a starting price tag of Rs 15,999 for the base 4GB RAM and 128GB storage version. You might remember the F series as a strong budget and mid-range lineup from Samsung to counter the Chinese dominance in the segment. I have reviewed several Galaxy F smartphones and feel that the South Korean giant has almost got the correct formula for success, ‘almost’ being the operative word here. The Galaxy F23 is directly challenging the Realme 9 5G (review) and the Redmi Note 11S (review). Is the Samsung brand name along with specs on offer strong enough to sway users toward the F23? Let’s get to it in this full review of the device. 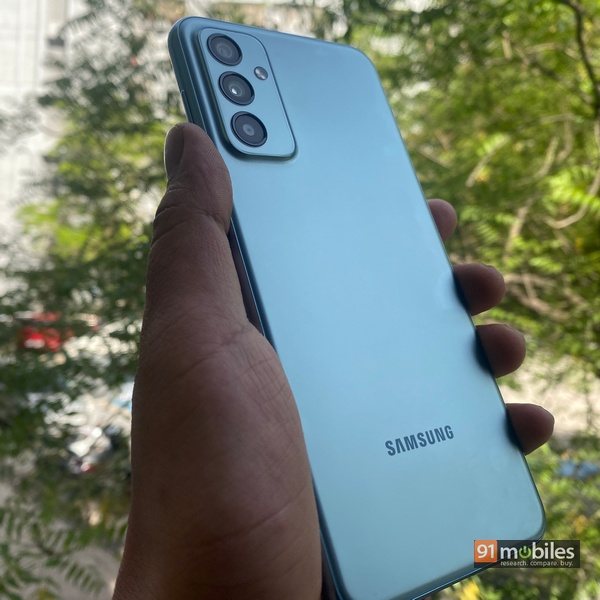 The Samsung Galaxy F23 is a well-rounded smartphone in terms of its display, software and processing capabilities. The battery life is above average and the cameras work well under ample sunlight. It’s the night photography that needs improvement, and the rather archaic look of the phone’s waterdrop-notch doesn’t help. 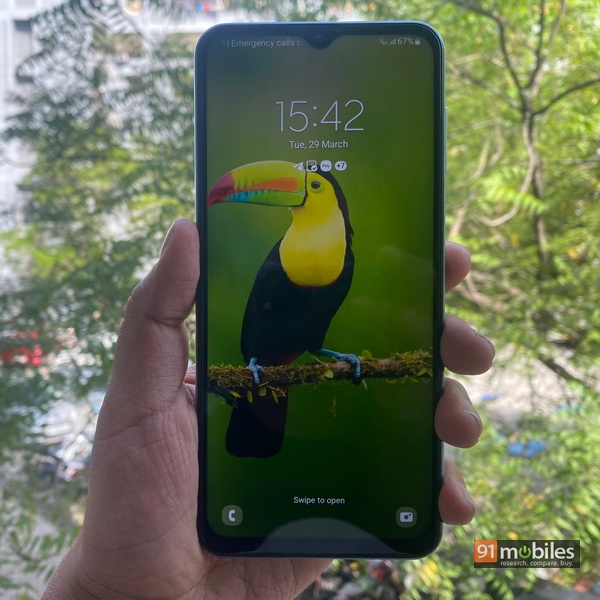 I really love the new matte-finish colour scheme being employed by OEMs in the affordable range. It provides a premium in-hand feel to the device while looking great. The Galaxy F23’s Aqua Blue variant I have received has a gorgeous light blue coating that shimmers under the light and mostly impedes fingerprints. As for the triple-camera housing on the top-right, it is slightly raised from the chassis and retains the same finish. The phone definitely does feel a bit heavy in the hand which is surprising since the weight doesn’t even cross 200g although the thickness of 8.4mm is a bit more than I would’ve liked. The bottom edge holds the 3.5mm headphone jack, a USB C port, and a speaker grille. Unfortunately, the earpiece up top does not marry the bottom-firing speaker for stereo sound, a feature almost all OEMs are providing at this point. Lastly, the power button on the side doubles up as the fingerprint sensor while the volume rocker, with a regular tactile feel, is present just above it. 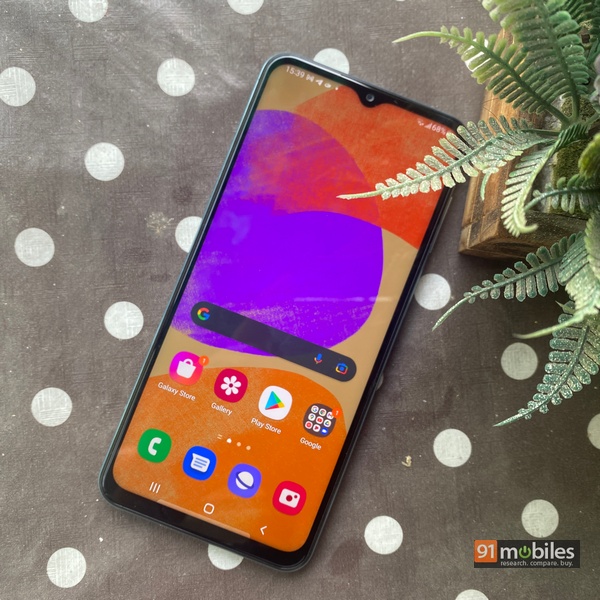 Samsung has equipped the Galaxy F23 with an IPS LCD panel that measures 6.6-inches in size and has an FHD+ resolution. It offers 120Hz refresh rate and I believe that anything less would’ve been a tough pill to swallow for an LCD toting device costing more than Rs 15,000. However, Samsung’s insistence on using the rather dated waterdrop-style notch and unusually thick bezels around the display doesn’t go down too well with me. The overall viewing experience on the F23 5G is more than satisfactory although the viewing angles, understandably, are not the best. The screen has decent brightness levels that Samsung hasn’t specified but doesn’t cause too much problem in sunny outdoor conditions. The refresh rate on the F23, like other Samsung phones, is adaptive which means that you can’t set it permanently at 120Hz and it is intelligently switched on in apps that support it. It seems that the screen is HDR10+ capable but neither Netflix nor Amazon Prime supports this standard on the device. I did notice that colour palette changes were not possible on the F23 with only the usual toggles of Eye comfort shield, Font size, and Dark mode present in the display customisation settings. Even so, the overall visual vibrancy of any content on the device was quite obvious and made the experience rather enjoyable. 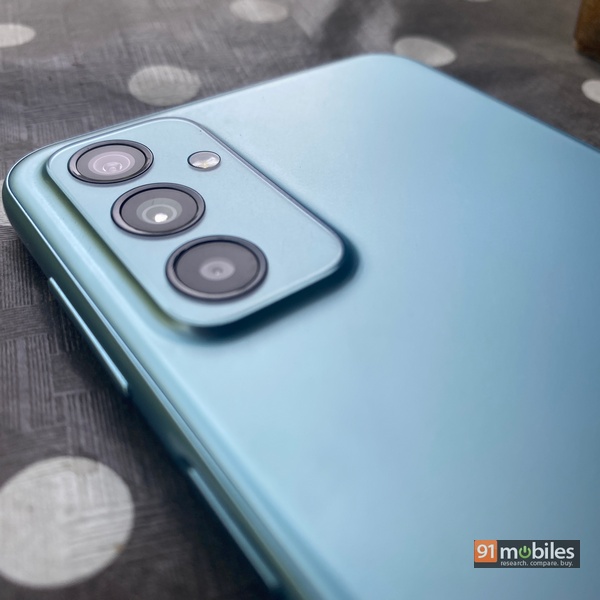 As for the cameras, Samsung is using a 50MP primary sensor with an f/1.8 aperture while the supporting ensemble consists of an 8MP ultra-wide, a 2MP macro, and an 8MP selfie shooter. Talking first about the primary sensor’s daylight photography capabilities, the F23 is able to churn out excellent shots that are full of colour and high dynamic range. Focusing speeds are quick as is the shutter speed and combined they deliver crisp shots with good exposure control. The sensor is capable enough to not blow up the highlights in the background while gathering substantial details from shadows. There are a bunch of filters baked inside the camera app to get more spunky looking shots but I prefer more natural-looking tones. The ultra-wide sensor adds a lot more into the frame, as you would expect, while also keeping a sharp focus across the frame. Detailing was not the best but it did keep colour temperatures in check, something I’ve seen is lacking in several phones of this price range. The edge detection on portrait mode is not the best although I do like the subtle blur that is brought out in the background and it goes easy on the eye. Lastly, the macro sensor, while being just 2MP in resolution, did take some great shots but only when the lighting was ample. Most of my issues with the camera lay in the night photography capabilities of the device which, for the lack of a better word, are below average. The device tends to overprocess photos and robs them of their natural detailing while introducing noise. Even with the dedicated night mode, the exposure levels are iffy in many cases while lens flare from nearby street lighting is also an issue. The colours are quite dull and the focus speeds are not great as well. Definitely an area of improvement for the Galaxy F23. However, when it comes to the selfie camera, I am more than satisfied with the results. My facial hair and features are taken in sharp prominence while maintaining accurate skin tones. Even in low light the focus and sharpness are ample for my needs. 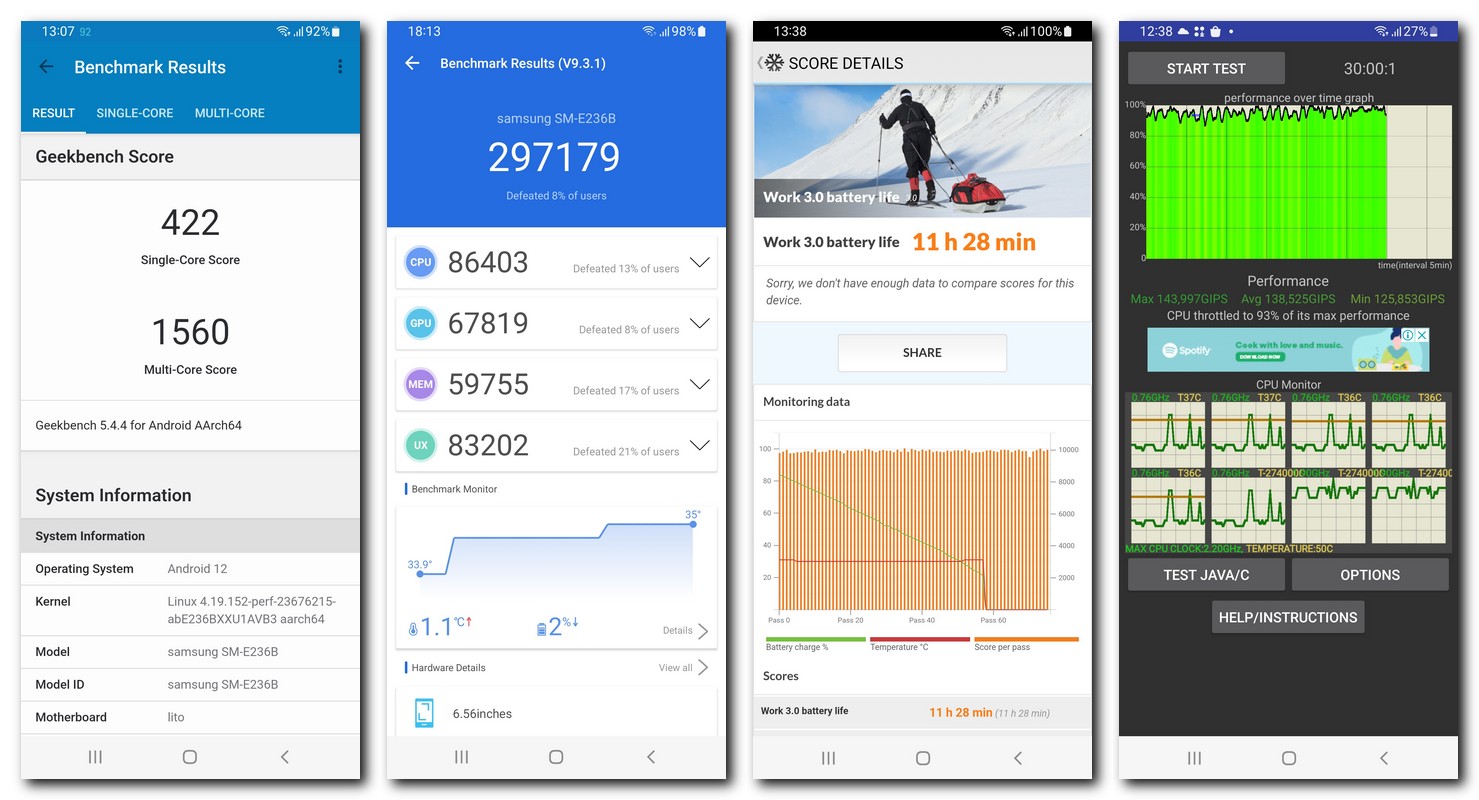 Moving now to performance, the Galaxy F23 is the first phone in Samsung’s F series lineup to feature a Qualcomm Snapdragon SoC. Specifically, the device harbours the Snapdragon 750G chipset, popular in the mid-range segment two years back. Now in an affordable phone, the 750G can’t be considered underwhelming, as my usual daily needs on the F23 were accomplished without a hitch. What I mean by that is normal tasks like app switching, media surfing or internet browsing on Chrome will not be problematic. I do have concerns, however, about the 4GB LPDDR4 RAM which feels slightly inadequate for today’s needs and you might have to shell out that extra Rs 1,000 for the 6GB version. Internal storage remains at 128GB UFS 2.1 across both versions. The device doesn’t heat up during CPU intensive tasks and the CPU Throttle benchmark showed that the SoC was able to maintain 93 percent of its peak capacity during the 30-minute run. Benchmark numbers are not as promising, however, with a Geekbench 5 multi-core score of 1,560 and an Antutu V9.1.3 result not even crossing the 300,000 mark. Talking about BGMI, the device is capable of sustaining Ultra (45fps) frame rate at Balanced graphics, which is about what most phones in the price range can accomplish. 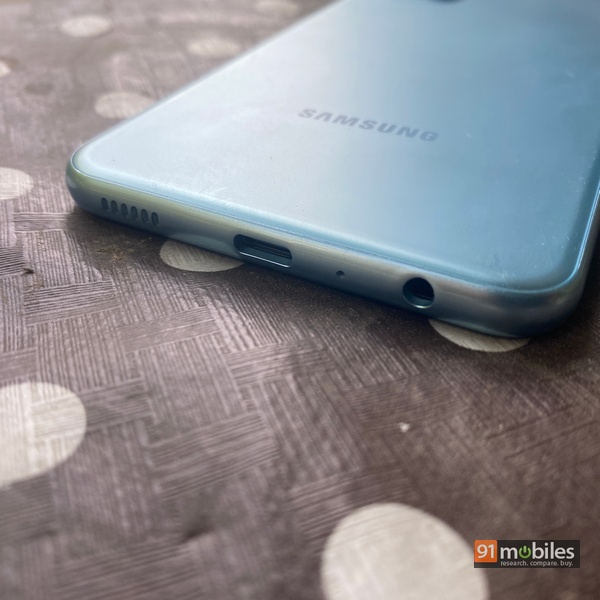 As mentioned earlier, the Galaxy F23 has only a bottom-firing speaker which can get muffled when holding the phone. Thankfully the 3.5mm headphone jack can appease the few of us who like to satisfy our audio hunger through wired means. 5G is also an aspect to take notice of although it’s unlikely India’s telecom infrastructure will get ready to support it soon. The side-mounted fingerprint sensor isn’t the best that I’ve seen but it gets the job done without too much hassle. Apart from that, I faced no issues, either call or mobile data related, on Jio’s 4G LTE Noida network. 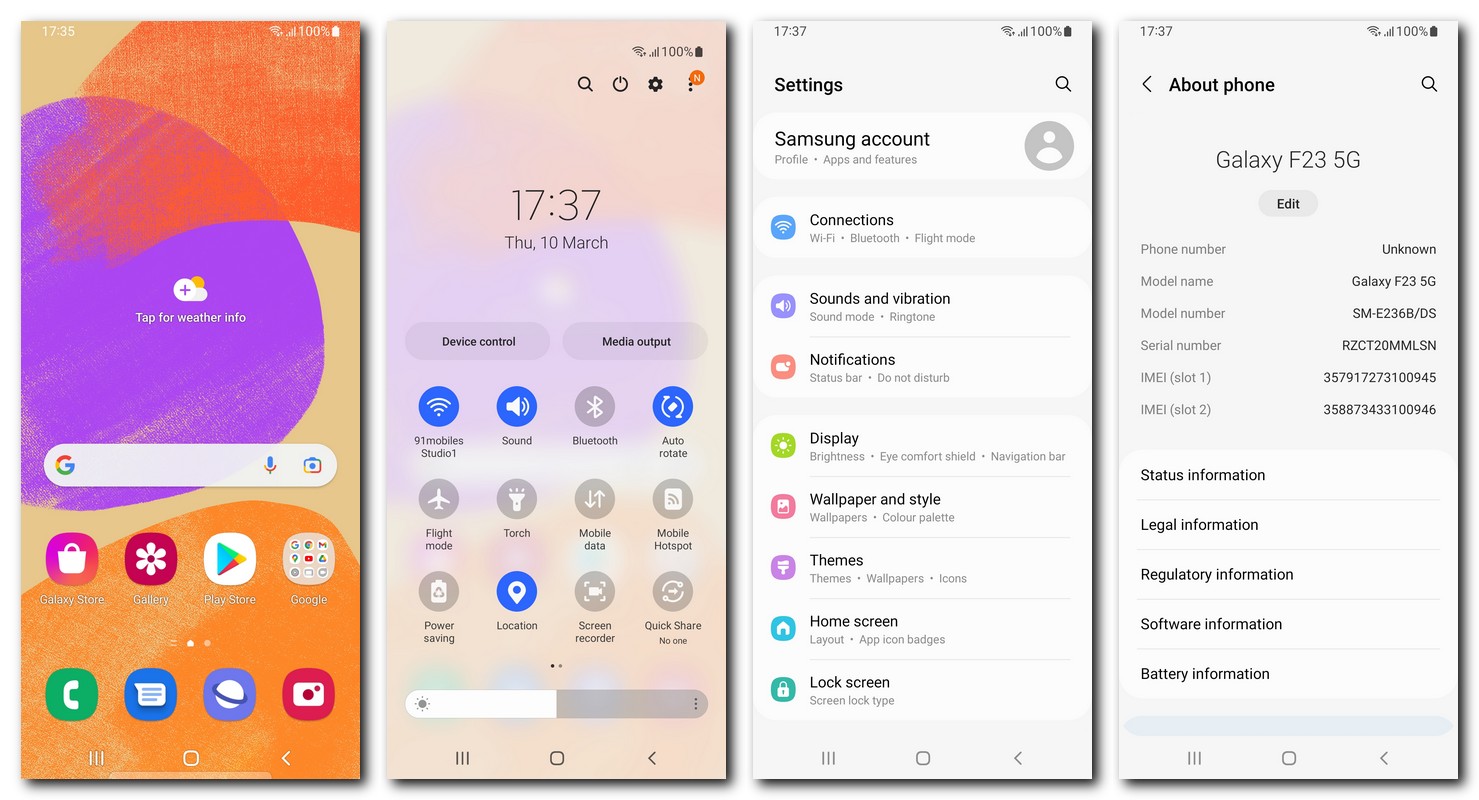 Software-wise, the Galaxy F23 is running on Android 12 which is based on Samsung’s OneUI 4.1 skin. My opinion on the company’s recent UI escapades has been largely positive with a few drawbacks here and there. I have been a fan of how OneUI has become more organised and cleaner while retaining the high customisability that Samsung is known for. What’s more, security patches on the F23 are also up to date which was not the case on earlier Galaxy phones. For a more detailed understanding of OneUI 4.1, you can read my Galaxy S22 and S22 Plus review. 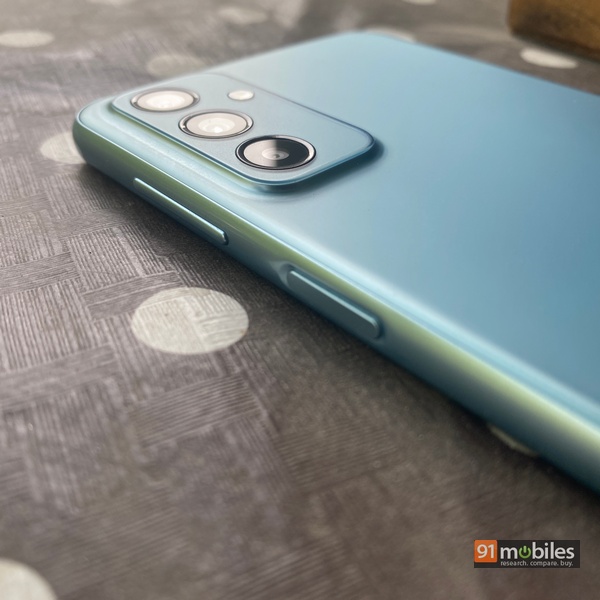 The battery capacity on the Galaxy F23 is pretty standard, i.e. a 5,000mAh cell capable of being charged at 25W. You do get phones with up to 6,000mAh batteries but for all intents and purposes, the F23’s cell is capable enough to easily push past the one day limit on normal usage. I generally didn’t put the phone through hardcore GPU usage and used it for light Chrome browsing along with binging Modern Family on Hotstar. I was seeing about 25-30 percent left in the bank when I was about to go to sleep, which I think is pretty reasonable. However, I do feel that the 25W charging speeds could be bumped up to 30W or more as it takes about 100 minutes to completely juice up the phone. 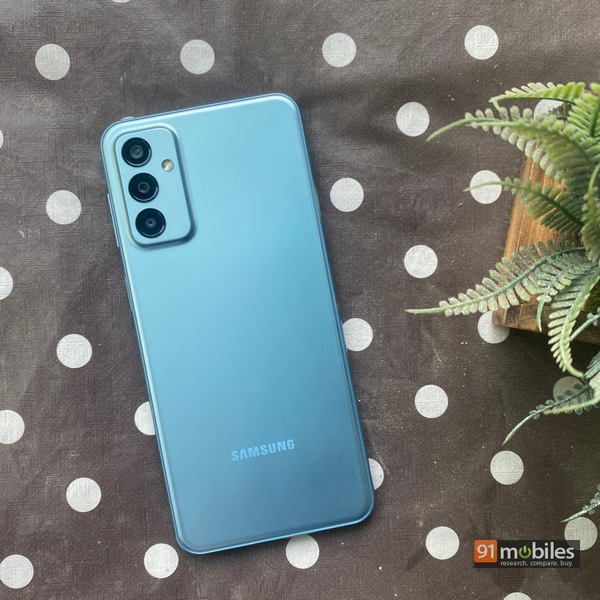 The Samsung Galaxy F23 5G ticks most of the boxes that make it a worthwhile offering in this space. Its design is sturdy, robust and provides a great in-hand feel. Although the display could have been AMOLED, the 120Hz colour accurate LCD panel makes up for it and the daylight camera performance is more than satisfactory. Apart from that, the phone comes with Android 12 out of the box, which is something I cannot say for most of the competing devices. However, the front of the phone looks rather ancient with the waterdrop notch and the low-light photography from the camera is nothing to write home about. If these two drawbacks don’t factor into your decision-making process, the Galaxy F23 is a phone worth consideration.