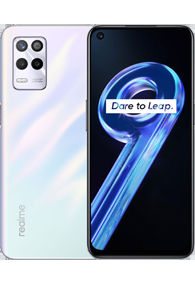 Chinese smartphone giant Realme has unveiled new additions to its signature number series in the form of the Realme 9 5G and Realme 9 SE 5G. As things stand, the company has unveiled a grand total of six phones in the span of three odd months, which is mind-boggling, to say the least. But, more to the point, the Realme 9 5G is the direct successor of the Realme 8 5G (review) from last year. The device is priced at Rs 14,999 and competes with a few phones from Realme’s own stables, including the Narzo 50 (review) and Realme 9i (review). Apart from that, the handset hopes to cause an upset to the Redmi Note 11 (review) as well, which, albeit a tad more expensive, retails in the same price bracket. So, today, let’s take a closer look at the Realme 9 5G and see if it can stand its own amidst the hotly contested budget segment. 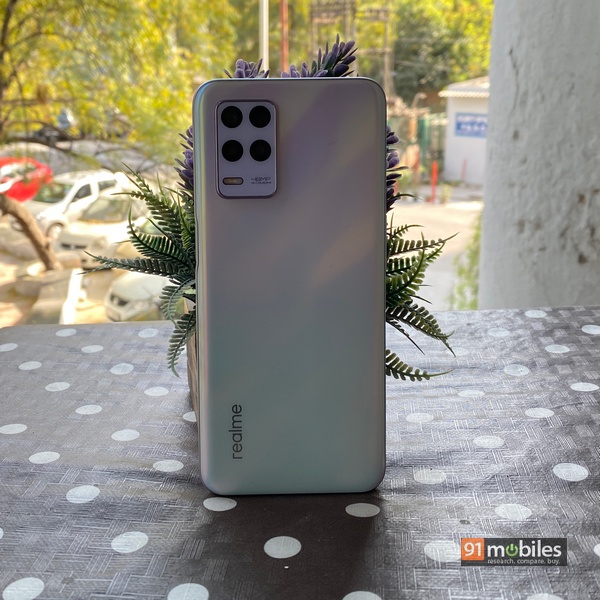 The Realme 9 5G has all the makings of an adequate budget phone. That said, the device could’ve benefitted from a more capable camera stack, along with a dual speaker setup.

Design innovation usually takes a backseat as far as affordable devices are concerned, with companies focusing more on a phone’s internals to cater to the spec-heads. Case in point, Realme, which is guilty of reusing the same design ethos to stylise its contenders in the affordable segment. In fact, the Realme 9 5G looks a lot like the Narzo 50 too, albeit features a more polished finish on the back panel. The handset makes use of a unibody polycarbonate construction which, might not feel as premium, however, is undeniably more resistant to accidental drops. And, for what it’s worth, the handset even ships with a gradient finish on the back which looks good, although can be found on any run-of-the-mill Android phone as well. Dubbed the ‘Ripple Holographic Design’, the back of the phone changes its hue as light impacts the surface at various angles.  Furthermore, the device feels reasonably light in the hand, which is saying something, since the phone is packing a chunky 5,000mAh cell. What’s more, the unit’s curvy back lends users a better grip as well. As for the I/O, the handset ships with a USB Type-C connector, a 3.5mm headphone jack, and a speaker grille located on the bottom. The phone’s volume rocker is positioned on the side, alongside its power toggle which, by the way, also doubles up as a fingerprint scanner. On the whole, the Realme 9 5G offers a robust design, which is a plus point for anyone looking to buy a phone on a budget. That said, I would’ve liked to see a bit more flair in the design department. As things stand, the Realme 9 5G’s aesthetic is – for the lack of a better word – fairly utilitarian. 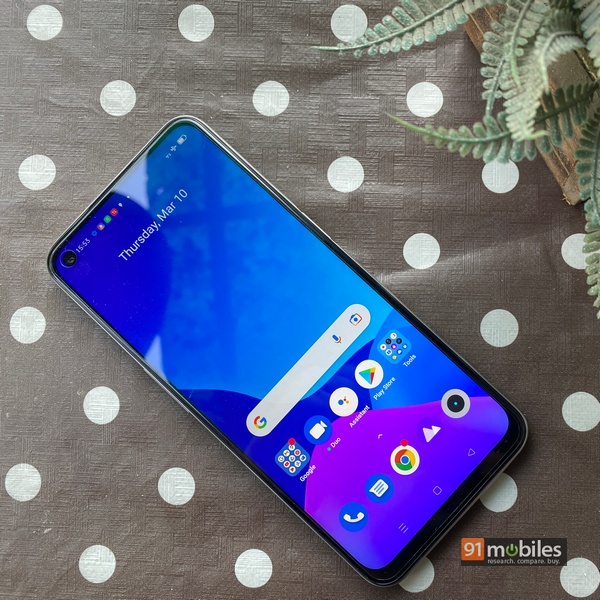 In terms of the display, the Realme 9 5G comes equipped with a FHD+ LCD panel that measures 6.5-inches and offers a 90Hz refresh rate. The panel features a punch-hole positioned towards the top-left, which shows traces of backlight bleeding, a common theme among LCD screens. The same goes for the screen’s viewing experience too, with the panel offering adequate colour accuracy and narrow viewing angles. With that said, I was satisfied with the fluidity of the display, and the unit’s 90Hz refresh rate keeps jitteriness whilst navigating at bay. On the flip side, the display’s peak brightness could’ve been better, as I had to squint a bit while glancing at the screen under Delhi’s blistering afternoon sun. As for OTT content, Realme has equipped the phone with WideVine L1 certification and correspondingly, you can enjoy your favourite TV shows and movies on OTT services like Netflix in HD quality. 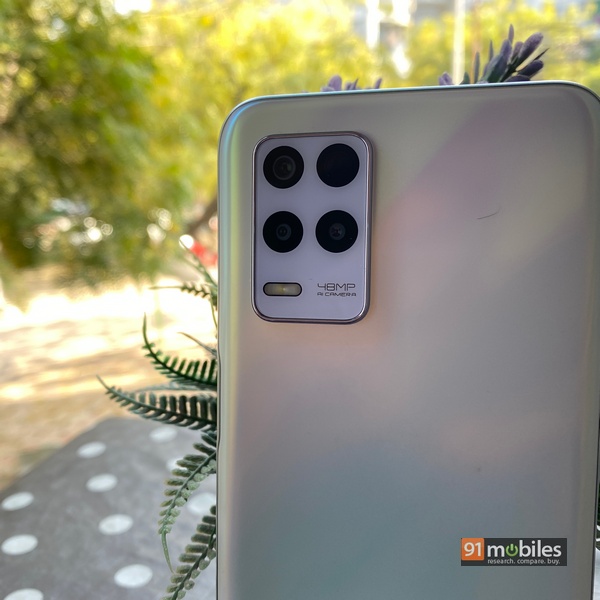 A smartphone’s camera specs are usually plastered front and centre in the promotional material, and for good reason. With the advent of social media services, buyers opting for a new handset require a capable camera stack that can click serviceable, share-worthy snaps. To that note, the Realme 9 5G employs a 48MP main sensor that works alongside a 2MP macro camera and a 2MP depth camera. So, are the sensors any good? Well, photos snapped during the day offer crisp details and an above-average dynamic range. The main sensor’s focusing speed, however, is a bit slower than I had expected. In fact, I had to tap the shutter button a few times to click a photo on some occassions. To the company’s credit, it could be a standalone issue with my unit, however, I hope the brand looks into it nonetheless. Moving on, the sensor’s exposure control was average, at best, with the unit making subjects overly bright when the sun was shining right above them. Unfortunately, the handset’s night-time photography leaves a lot to be desired. In fact, even with assisted street lighting, the device struggled to latch focus on the subjects. Truth be told, without tapping on the viewfinder, the sensor hunts for focus in the frame and the resultant shot appears quite hazy. Even with proper focus, there were traces of oversharpening being employed in areas of less light and the dedicated Night mode didn’t do much to rectify the situation. As for the macro sensor, the unit is a bit overzealous with colours, however, you can get away with some creative shots for your social media handles if you use the sensor well. What’s more, the handset’s 2MP depth shooter can take good monochrome portrait shots too, however, it is entirely possible to reciprocate the same via some filters on IG. Quite frankly, I feel that the handset would’ve benefitted more from a wide-angle or telephoto lens.

Finally, there is the 16MP selfie camera housed inside the punch-hole which has all the traits previously seen on Realme devices. Sharp facial oversharpening, reasonably matching skin tones, and slightly wayward exposure control behind my head sum up the selfie camera’s capabilities. 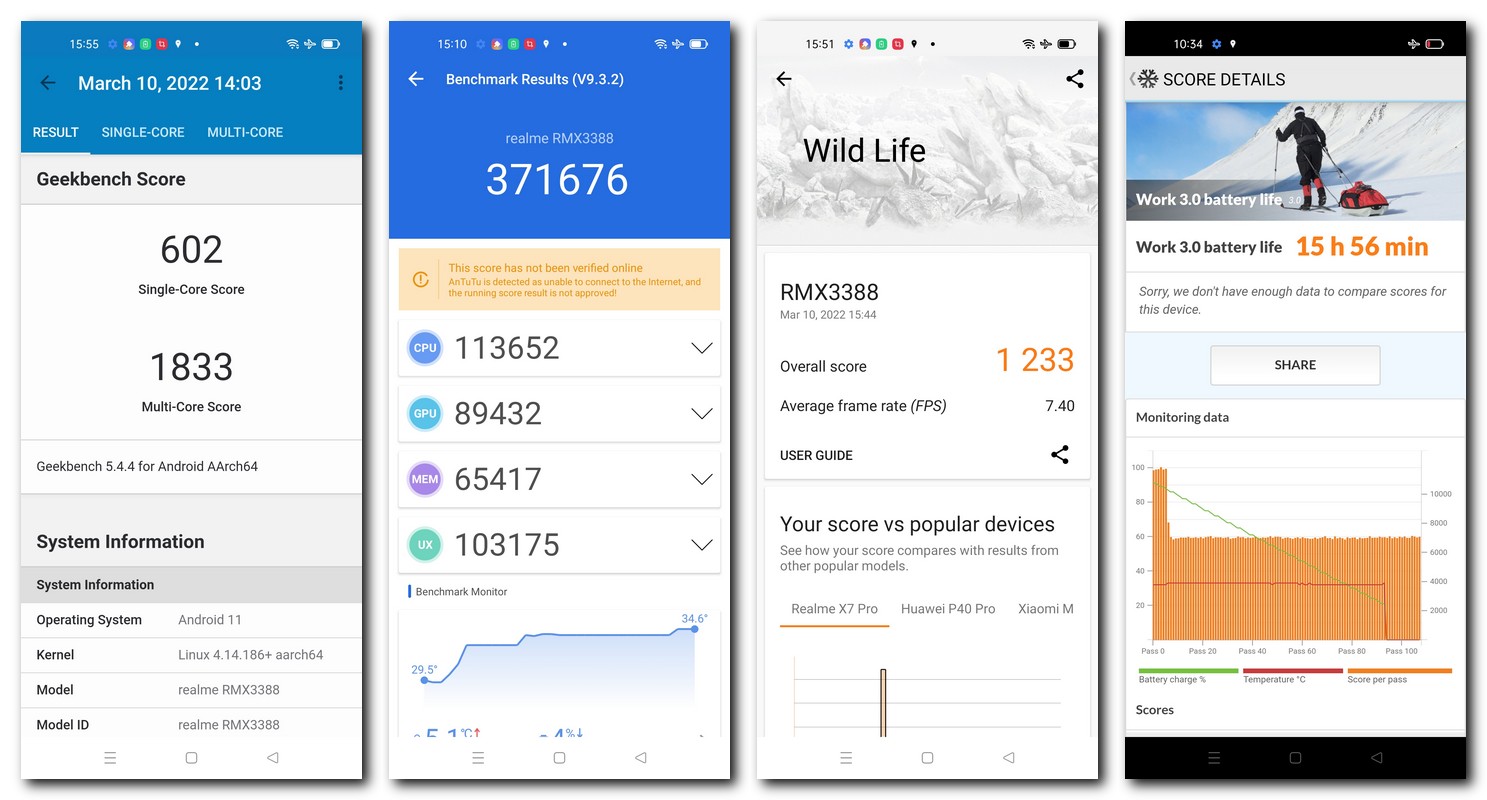 The Realme 9 5G is backed by the MediaTek Dimensity 810 SoC. Now, I won’t beat around the bush at all – the Realme 9 5G is a handy daily driver and the smartphone’s performance only falters whilst running GPU-intensive titles like BGMI. In fact, I was more than satisfied with the unit’s multitasking capabilities and the device could comfortably juggle a handful of resource-hungry apps like Instagram, Snapchat, and Chrome. Now, the SoC was boggled down when I tried editing a Reel on Instagram, but otherwise, the device felt quite snappy. Talking about a few benchmark numbers, Geekbench 5’s multi-core score was 1,833 while the overall result on Antutu V9.3.2 was 371,676 points, both of which are optimal for the pricepoint. The smartphone supports up to 6GB of LPDDR4X dual-channel RAM which is paired with 128GB of UFS 2.1 internal storage. Thankfully, the unit features a microSD card slot, meaning buyers opting for the set can increase the phone’s storage by up to 1TB. Realme also offers the ability to virtually expand the RAM by up to 5GB by borrowing a partition from the handset’s internal storage. As far as gaming goes, the device runs BGMI at Balanced graphics and the Ultra (45fps) frame rate presets. During my stint with the phone,  I didn’t notice any significant heating issues whilst gaming on the handset. As a matter of fact, the game ran as smoothly as it can for about an hour before incurring frame drops, which is great. 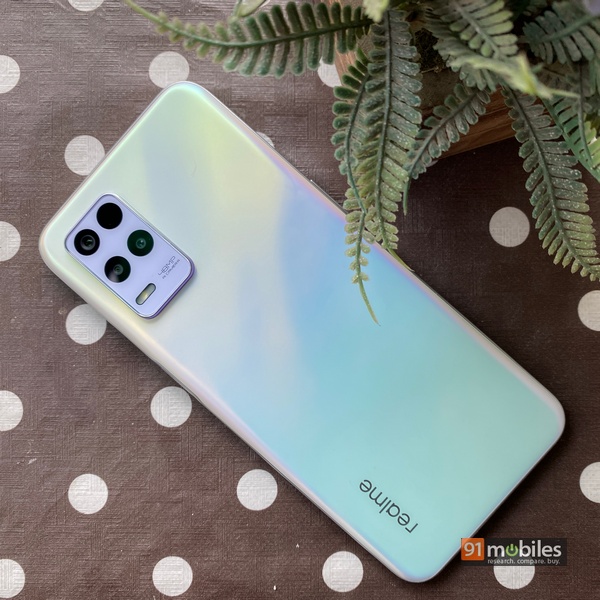 For audio, the device ships with a mono speaker at the bottom which sounds as good as you can expect from a budget phone. Thankfully, the unit touts a 3.5mm headphone jack that offers a static-free audio experience when relaying media via a pair of wired earphones. What’s more, the handset is 5G ready, so you might be able to utilise uber-fast internet speeds on the phone down the line. For now, though, you can use 4G LTE services with the Realme 9 5G which worked adequately. I’d also like to add that the authentication speeds from the side-mounted fingerprint sensor were to my liking, however, the unit’s facial recognition is a bit touch and go. 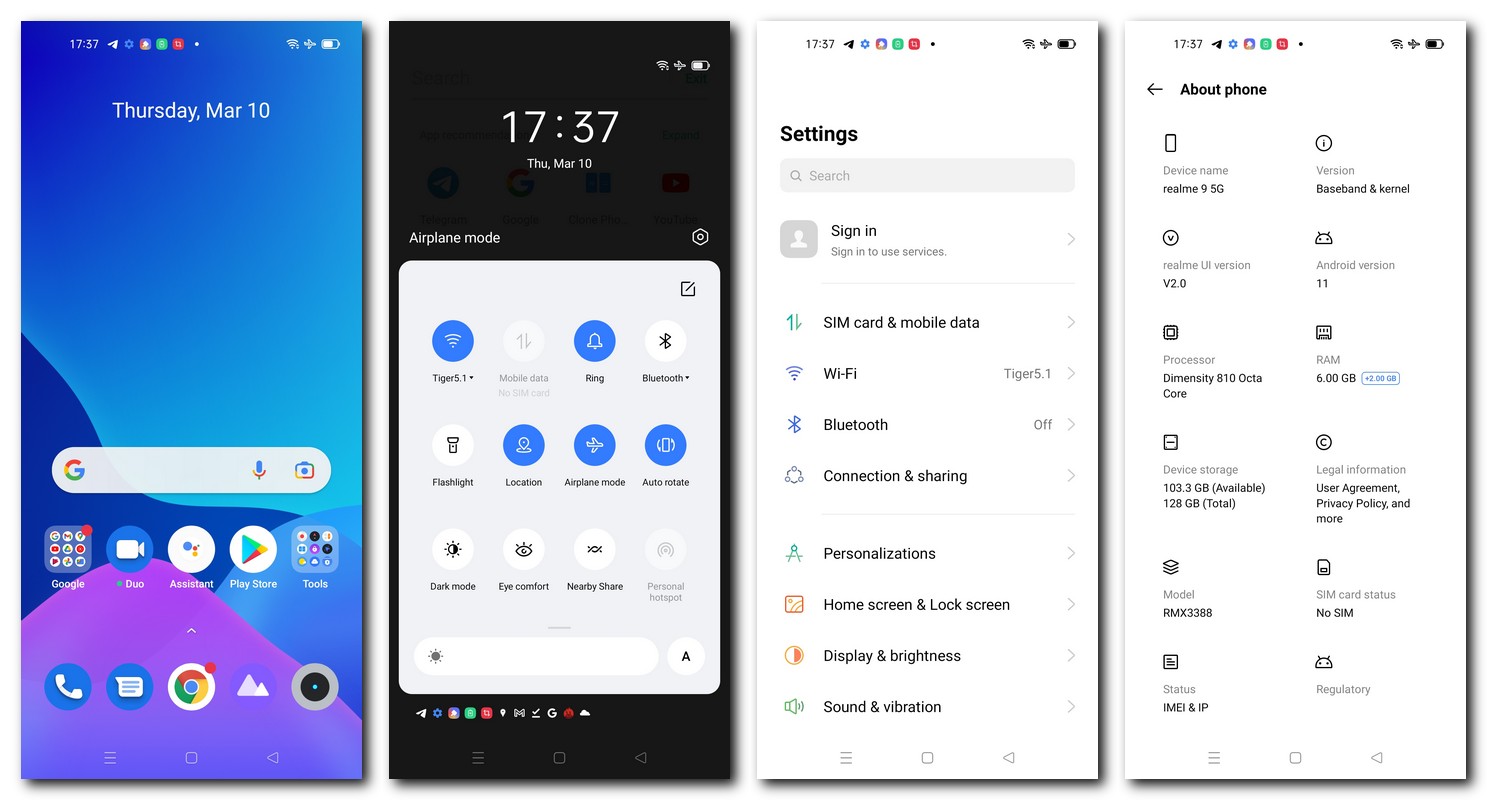 Software-wise, Realme is running its proprietary RealmeUI 2.0 skin which is based on Android 11. I have covered multiple phones from the company running the same skin and to cut a long story short, Realme UI offers oodles of customisability, however, the interface could do with lesser bloatware. If anything, I hope the company updates the phone to Android 12 soon.

The battery life on the device is nothing out of the ordinary. The 5,000mAh cell is a staple for most, if not all budget phones. That said, the handset’s 18W charging speed pales in comparison to the competition. Be that as it may, the device lasted nearly 16 hours in PCMark’s Battery 3.0 test and consequently, the handset should last users a full day off a single charge. To give you a better picture, I was netting around 5-6 hours of screen on time with the device, with my usage comprising browsing social media handles and watching a handful of 40-minute episodes on Netflix. Unfortunately, the device takes a while to charge completely and you will have to stay tethered to the wall outlet for about two hours to completely refuel the phone. 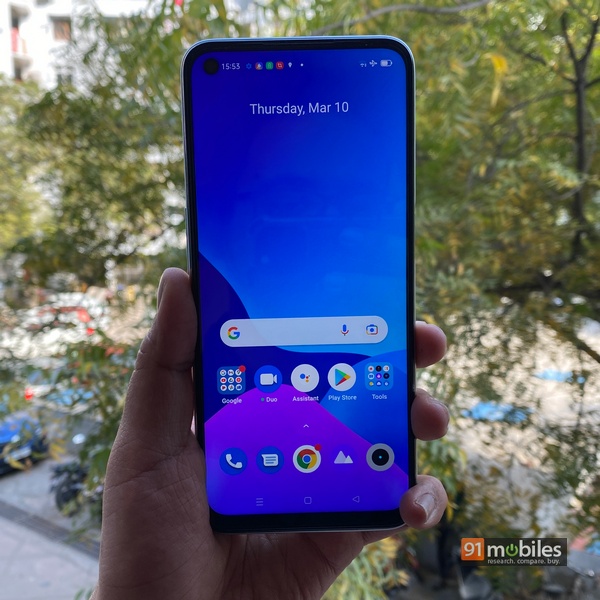 Realme has made a safe bet with its latest contender, the Realme 9 5G. In fact, the handset’s specs are nothing to write home about but despite that, the handset is still a viable contender in the budget segment. While I would’ve liked to see a more capable camera array as well as a fancier design, users opting for the phone will find the Realme 9 5G’s performance, display quality, and software experience up to the required standard. It remains to be seen how well Xiaomi and POCO respond to Realme’s continuous bombardment of products below the Rs 15,000 mark. Do let us know in the comments below of what you make of Realme’s latest and for everything tech, stay tuned to our blog.