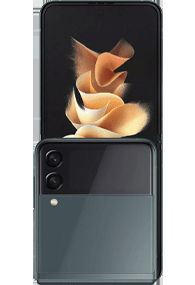 The foldable smartphone segment is in the news again, all thanks to Samsung which has just announced the launch of its Galaxy Z Fold3 and Galaxy Z Flip3 foldables. The two siblings might bear the same branding and boast foldable innovation, but they’re very different beasts. The Z Flip3 features the iconic clamshell design that was popular many moons ago and comes as the successor to the Z Flip that was launched last year. And interestingly, the device comes in at a lower price point than its predecessor, despite the upgrades and new additions. But, is it for you? 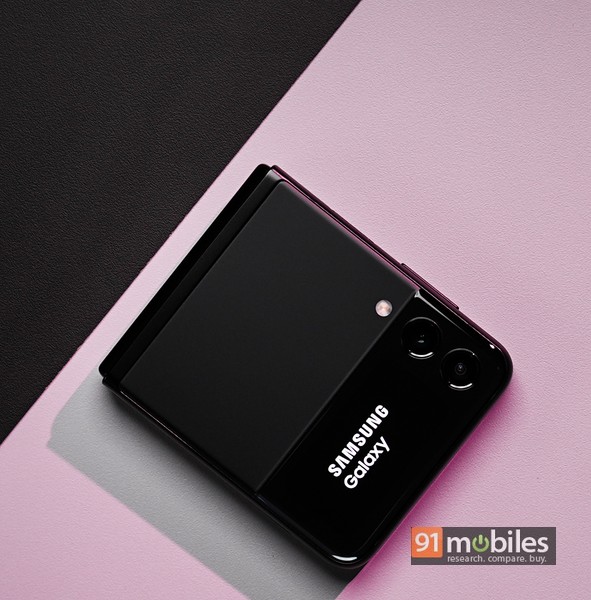 The Galaxy Z Flip3 is a stylish smartphone that, thanks to its special screen, can be folded into a compact and highly portable device. The cameras aren’t amazing, while the battery life leaves a bit to be desired too, but if you can live with those niggles, the Z Flip3 offers smooth performance, useful software tweaks, and a form factor that racks up lots of points on style. 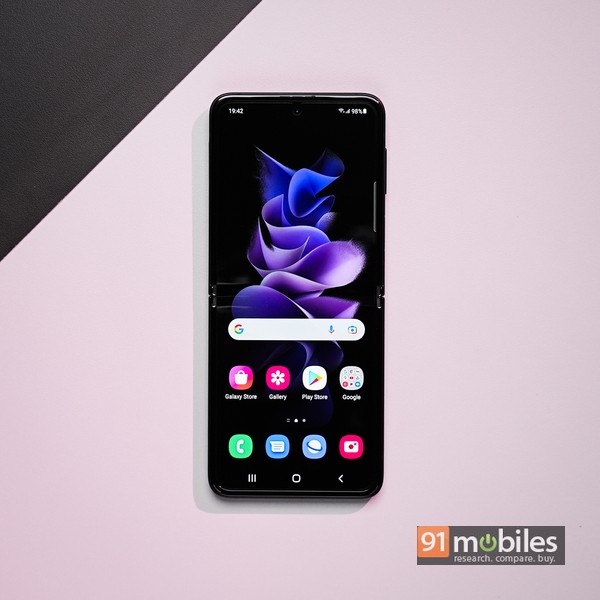 While the Z Fold3 is more about productivity and entertainment, the Z Flip3 is more about style and convenience. You see, the Galaxy Z Flip3 is actually a regular phone (sort of), that can be folded in half to make it more compact. The result is a small slab of glass and metal that disappears into bags and pockets. When you remove it from its retail box (which only contains a Type-C to Type-C cable and no charger), you’ll see a slim phone which is quite lightweight. The controls and port placement look almost standard too, with the rear of the phone sporting a pair of cameras placed inside a shiny panel on top. The joint in the middle of the chassis gives things away though, and when you fold the device, it shrinks into a compact slab measuring 4.2-inches diagonally. The aforementioned shiny panel lights up to reveal a 1.9-inch external display, which Samsung refers to as the Cover Screen. The main screen inside is foldable, and enables the Z Flip3’s cool design. 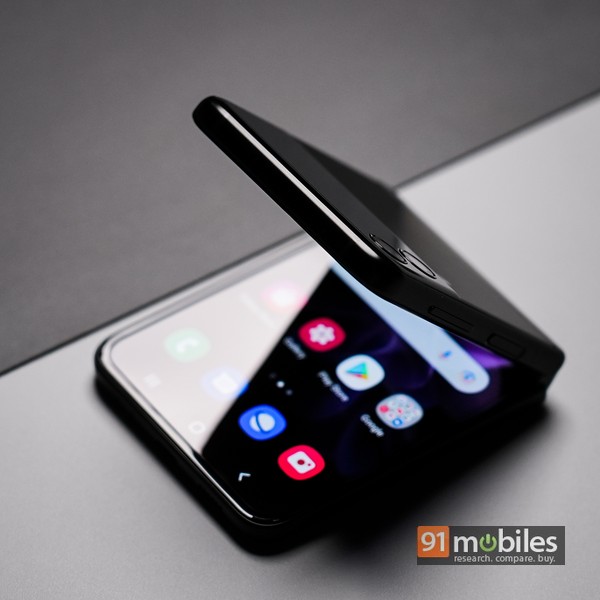 The bad news is that there’s no spring-loaded mechanism to flip the phone open, and you’d need to use both your hands to unfold it. The good news, however, is that the sturdy hinge can keep the phone open at any angle in the middle before it opens up fully, effectively giving you a kickstand that can keep the phone propped up on a flat surface without needing a tripod. This allows for interesting use cases, such as being able to shoot pictures and videos with the phone propped up in front. 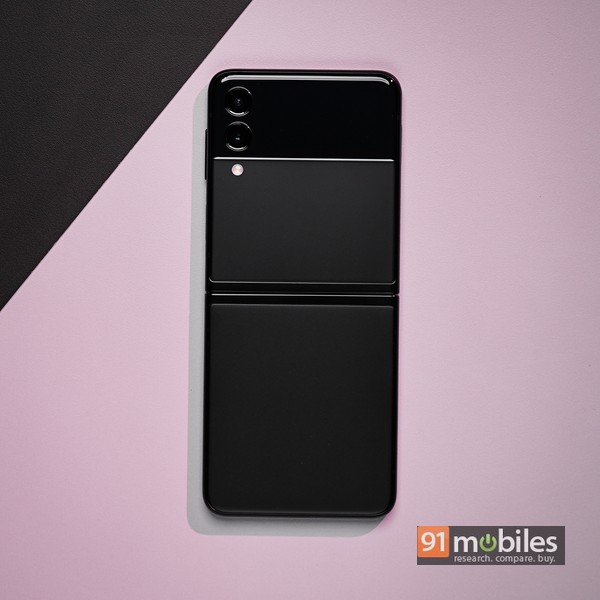 Samsung has also added quite a few durability enhancements to boost the confidence of prospective buyers. First, there’s the IPX8 rating which makes the device water-resistant. Samsung also says that the Armor Aluminium used in the frame and the hinge make the phone much sturdier as compared to its predecessor. Then there’s the Gorilla Glass Victus protection on the back, plus the protective layer on top of the main screen that adds to the build quality. 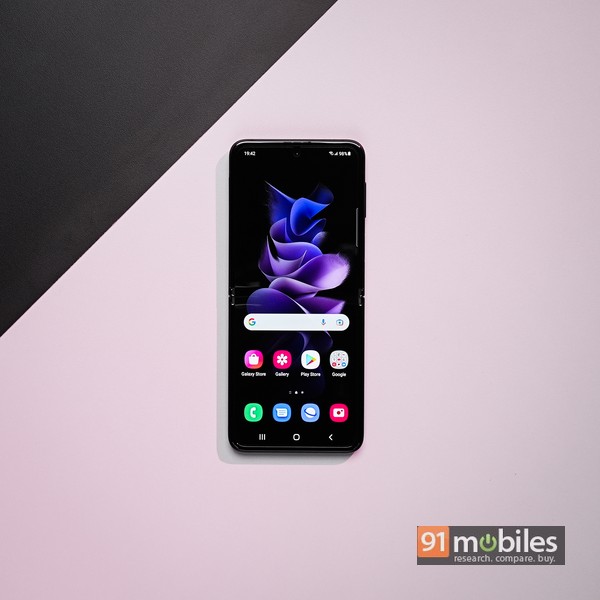 Just like its larger foldable cousin, the Z Flip3 boasts two screens. The 6.7-inch main screen is what you’d probably end up using the most. Unfortunately, the crease in the middle is still there, but other than that, the 120Hz, 1,080 x 2,640 pixel AMOLED display is a beauty and supports HDR10+ too. The Cover screen is where things get more interesting. Samsung has bumped up the Cover screen size to 1.9-inches as compared to the 1.1-inch on its predecessor. The Z Flip3’s bigger Cover display allows for more information to be shown, and in fact, you can actually accomplish a few things using this screen without needing to unfold the device. 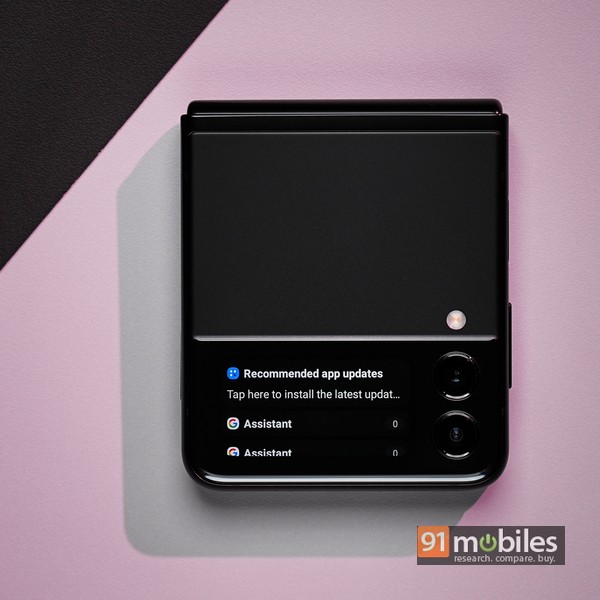 The Cover screen basically shows the time, battery level, and date. But, by double-tapping the power button, you can turn on the camera and use this display as a viewfinder, with the primary cameras on the device handling shooting responsibilities. You can shoot both stills and video this way. By swiping on the Cover display, you can even view notifications from apps, and view content like messages and emails as well. However, you’d still need to open the device to reply or do something more with those, other than viewing them. Swiping further on the Cover screen shows widgets like weather, music player, alarms, voice recorder etc, and you can customise the ones you want displayed via the display settings too. What’s more, incoming calls can be answered or rejected using the Cover screen too. Accepting a call that pops up on it switches the phone speaker on, so you can hold a conversation with the caller. 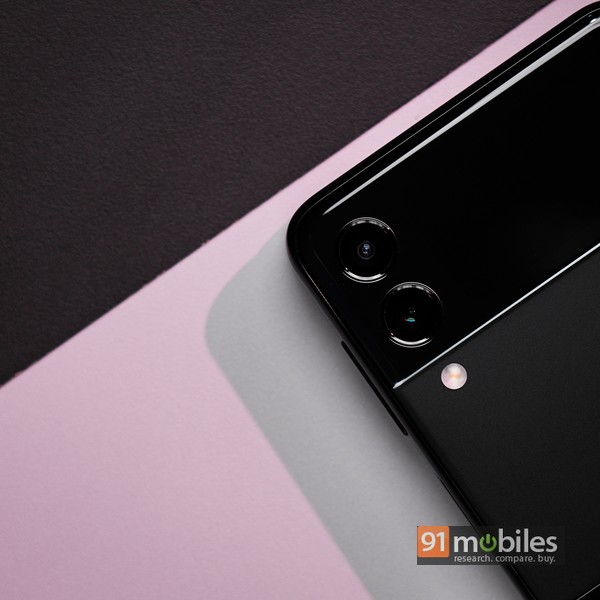 Now this is where things get slightly tricky for the Z Flip3, since it can’t really boast a full-fledged camera setup unlike most premium flagships, despite commanding a premium price. The main display features a 10MP selfie camera, while the primary setup comprises dual 12MP sensors, including an f/1.8 wide with dual pixel PDAF and OIS, along with an f/2.2 ultrawide with 123-degree FOV. 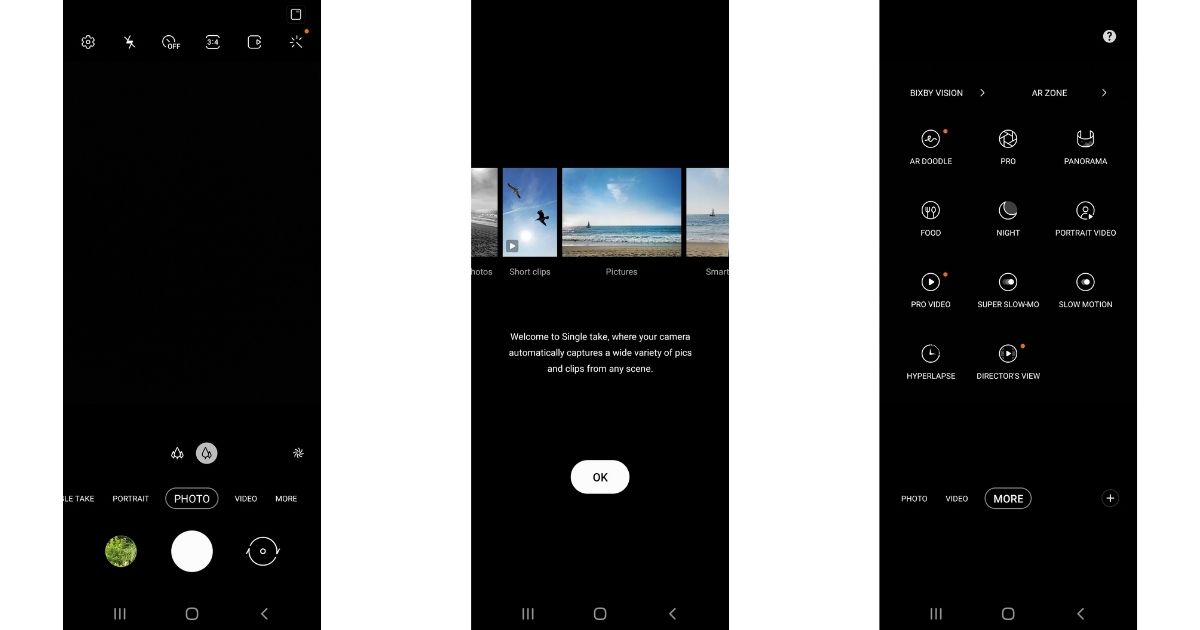 The camera app has all the usual features too, including Single Take. The selfie camera does its job well for the most part. The primary cameras do a good job as well, and in most cases, you should be pleased with the results. Daylight shots turn out crisp and nicely saturated, while low light shots are decent as well. It’s a good camera set up to have at your disposal, though the results might not amaze you, especially when you compare the images with Samsung’s own S series smartphones present in this price range, or others. The low-light images do leave something to be desired. That said, if you’re not extremely picky, the Galaxy Z Flip3’s camera shouldn’t give you many reasons to complain. 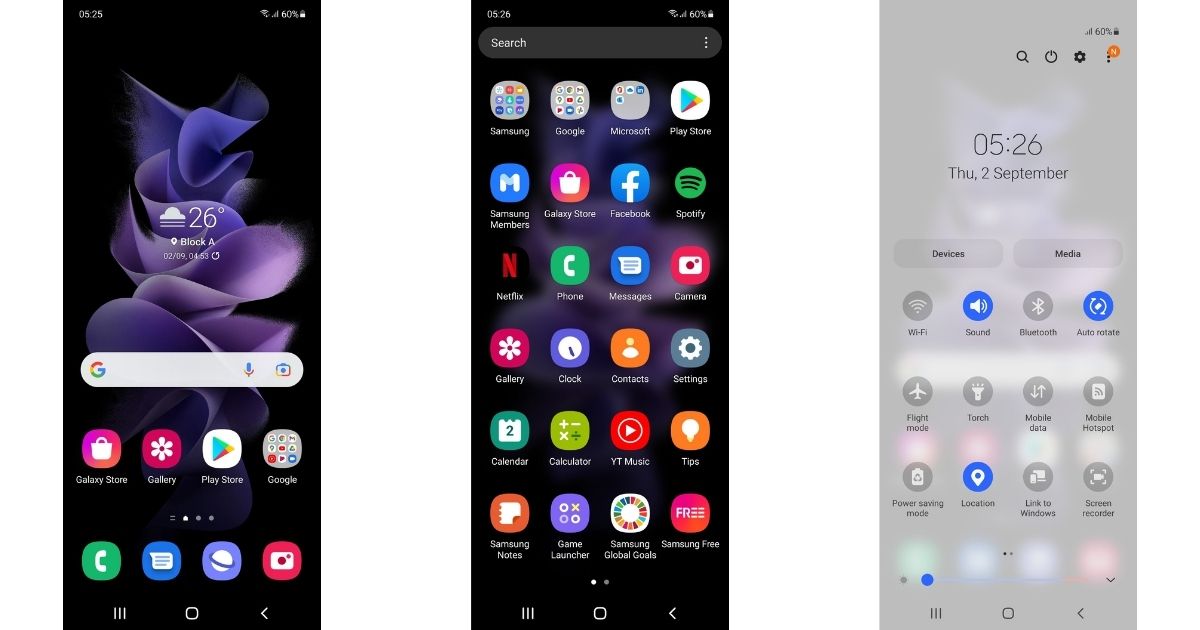 On the software side of things, Android 11 with One UI 3.1.1 is on board, complete with all the usual Samsung goodies like Secure Folder, Samsung Pay, Bixby, and more. Do note that unlike its bigger foldable sibling, the Z Flip3 doesn’t offer DeX, but that’s understandable since this device isn’t specifically positioned as a productivity-centric smartphone anyway. You can however, multitask and run multiple apps together in split-screen and pop-up view modes, and there’s Flex mode as well. 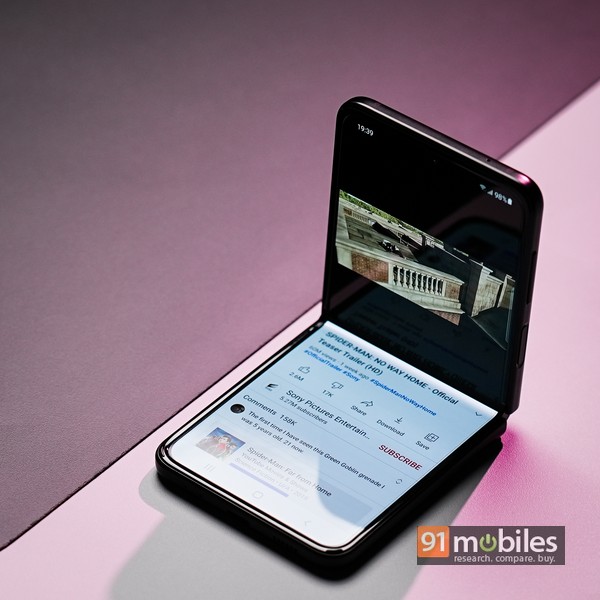 Courtesy its design and form factor, the Z Flip3 can be propped up half open, with the bottom half of the device acting as a kickstand. And apps that support Flex Mode can offer additional functionality when the phone is folded halfway. YouTube for example, is one of the apps that support Flex Mode, and with the phone open hallway, plays your video up top while showing you extra content on the bottom half of the display. T 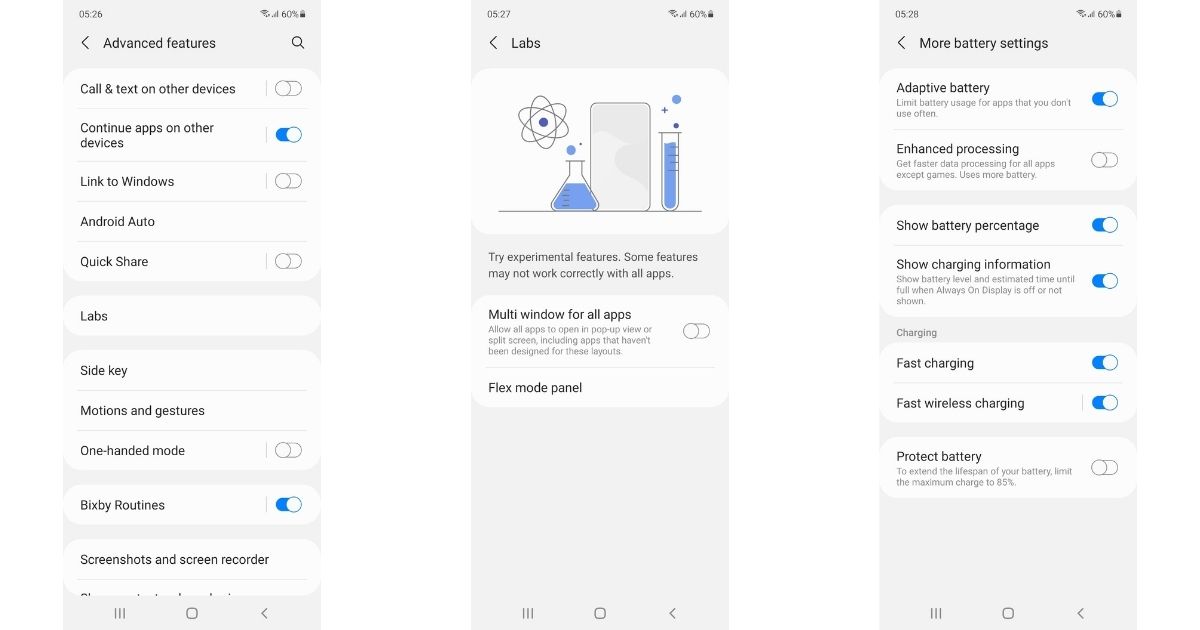 he camera app too, can take advantage of the Flex Mode, giving you a preview of the viewfinder on the Cover display and letting you shoot pictures or videos with the device standing on a stable surface. Also worth mentioning is a new battery setting, that pauses charging when the battery levels reach 85 percent, thereby prolonging its lifespan. 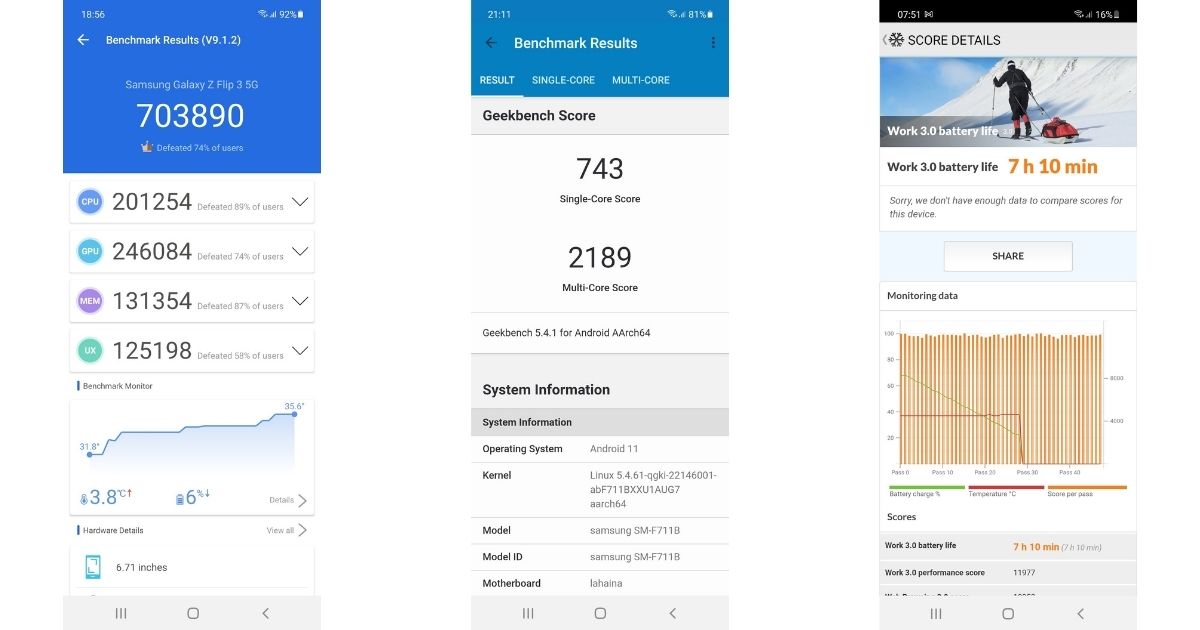 With the Snapdragon 888 SoC handling number crunching, mated to 8 gigs of RAM, and up to 256 gigs of UFS 3.1 storage, the Galaxy Z Flip3 is plenty fast in day-to-day usage. Of course, it isn’t really meant to be a gaming phone, but you can run intensive titles easily if you want. The phone does heat up a bit when stressed though. Performance is smooth in other aspects too, with both face unlock and the side-mounted fingerprint scanner working speedily and accurately. The stereo speakers output rich sound, while call quality etc is fine as well. I certainly didn’t face any issues when I tried it out on the Jio network in south Delhi. 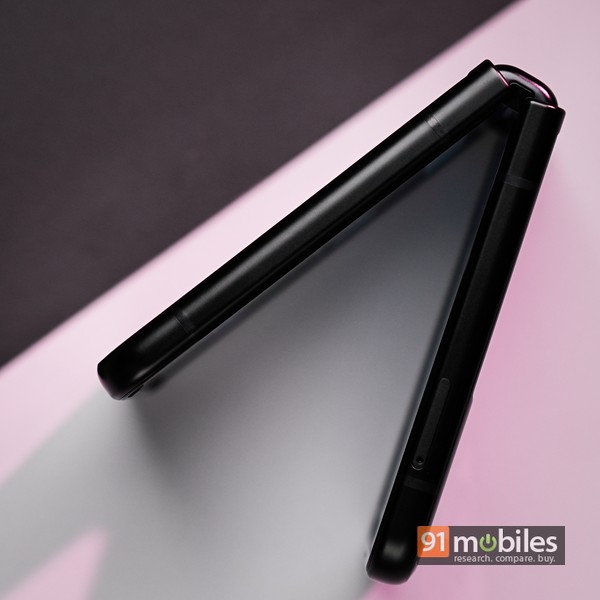 The Galaxy Z Flip3 packs in a 3,300mAh battery, and that’s really is its Achilles heel if you ask me. You see, it doesn’t really last the full day, and even with moderate usage, you’re likely to see a low battery notification by evening or so. Of course, you have the option of making use of various battery-saving modes that are at your disposal, or limit the screen refresh rate to 60Hz to prolong usage on a single charge. However, the 15W charging support isn’t impressive either, and acts as a double whammy for the phone when it comes to the battery department. You can expect a full charge in a little under 2 hours. You do get support for wireless charging, and there’s reverse wireless charging as well that lets you juice up your TWS buds and the like in an emergency. 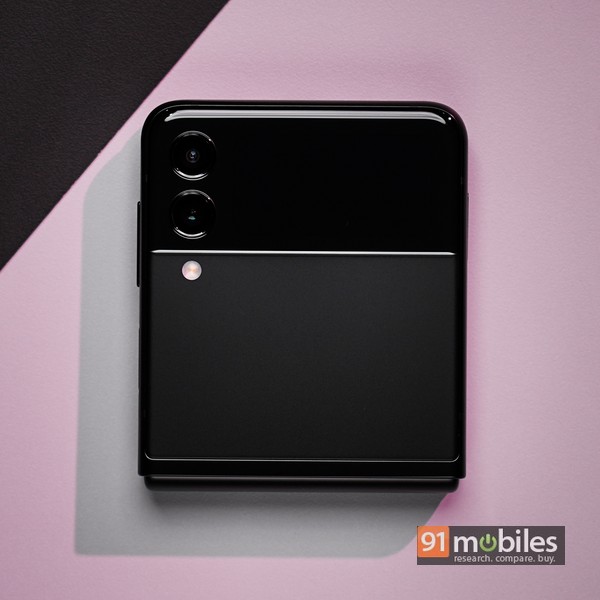 The Samsung Galaxy Z Flip3 waltzes into the Indian market carrying a sticker price of Rs 84,999. This puts it squarely in the premium flagship category, but the price doesn’t seem too high considering its predecessor was launched at Rs 1,10,000 last year. The Z Flip3 in that sense is a much more accessible proposition. However, it can’t really match other flagships in its price range, especially when factors like cameras and battery life are considered. The Galaxy S21+ (review) for example, is a more capable option to consider at this price point if camera quality and battery life are important for you. And so is the Mi 11 Ultra (review). That said, these devices can’t match the Z Flip3 in terms of style and convenience. The Moto Razr 5G can (being the closest rival in terms of the folding clamshell design), but then, it can’t match the Z Flip3’s pricing or specs. The Z Flip3’s diminutive size when folded, its innovative folding screen, smoother performance, and its overall flaunt value as an uber-cool device give it an extra level of oomph that could attract quite a few takers. At the end of the day, it’s a stylish device that’s a lot of fun to use, and that’s reason enough.