Apple’s MagSafe charging tech was announced for iPhones back in 2020, making its debut alongside the iPhone 12 series. And right from the get-go, it was clear that apart from fast charging, the Cupertino giant was aiming to make convenience the key selling point for the new tech. A bunch of MagSafe-compatible accessories popped up like mushrooms very quickly, with the range including chargers and mounting solutions designed for the desk and the car. 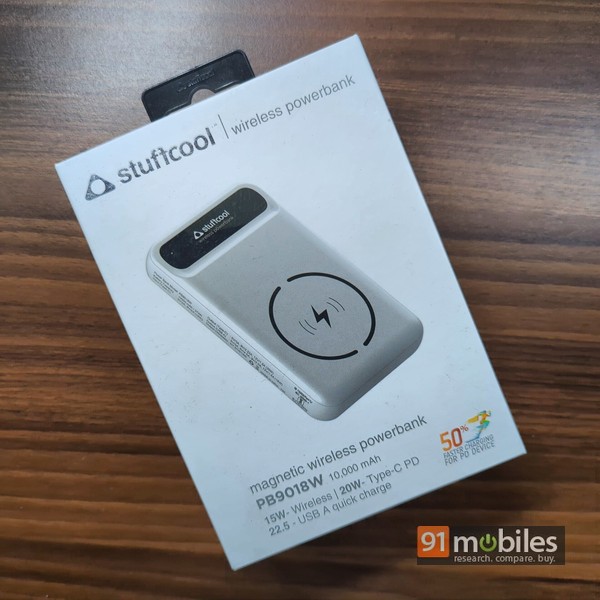 MagSafe-compatible power banks are another segment that emerged, and that’s exactly the topic I’m addressing here. You see, I have with me the StuffCool PB9018W Wireless Powerbank that’s designed to work with MagSafe, and if you’re an iPhone user, getting one of these makes a lot of sense. Here’s why I think so. 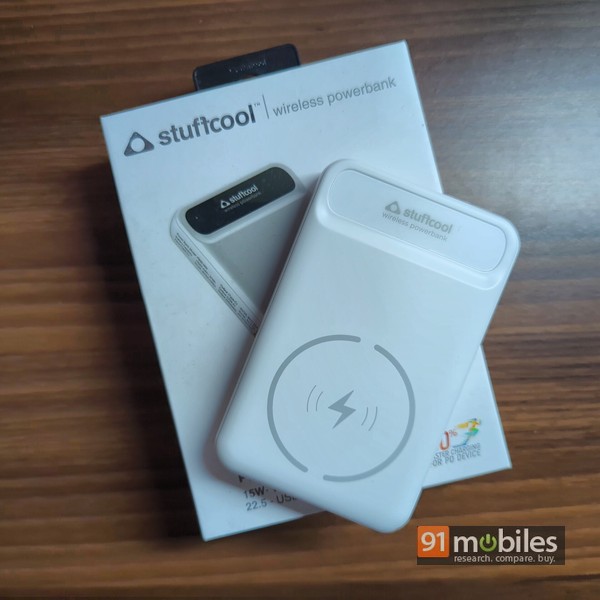 First up, the basics. This power bank holds a 10,000mAh battery pack, and yet, is extremely compact. You can get it in either white or blue, and the design is quite minimalistic. It’s a smooth slab of plastic, and one end of the block tapers off and becomes slightly thinner as compared to the rest of the body. This is where you’ll see a mirror-finished strip that holds a small display that indicates the power bank’s battery level when it’s turned on. For turning it on, there’s a small button on the end, right next to a Type-C and a Type-A port. 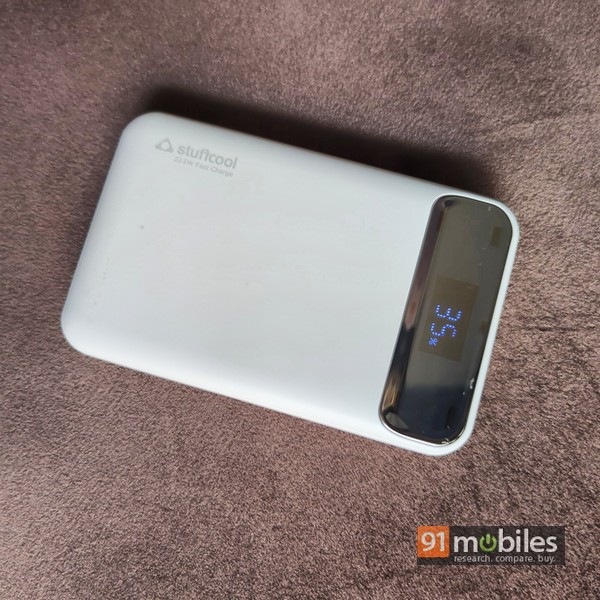 Flip the device over and you’ll see a circle with a lightning bolt in the middle — indicating the wireless charging area. This aligns with the magnets on the back of MagSafe-compatible iPhones, i.e., iPhone 12 onwards. I tried it out with an iPhone 14 Pro Max, and the power bank latched onto the back magnetically. The magnetic force is quite strong, but do note that you should either have your iPhone ensconced inside a MagSafe case or use the power bank on an iPhone sans any case for the best results. The power bank does work with non-MagSafe cases too, but it won’t attach well and will slip/fall off quite easily. 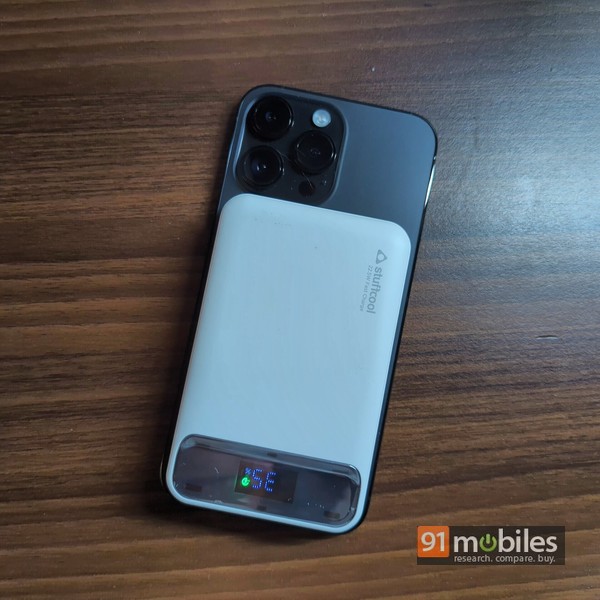 The Stuffcool Magnetic Wireless Powerbank took an hour and 15 minutes to charge the iPhone 14 Pro Max to 50 percent, with the power bank’s battery draining to 56 percent level in the process. The iPhone battery touched 80 percent in 2 hours 15 minutes, and was fully juiced up in a little over 3 hours, with 18 percent power still left in the tank. Of course, since Qi wireless charging is supported, the power bank works as a regular wireless charger for all compatible devices (15W max), and apart from smartphones that have this feature, can juice up accessories like the AirPods Pro sans cables as well. 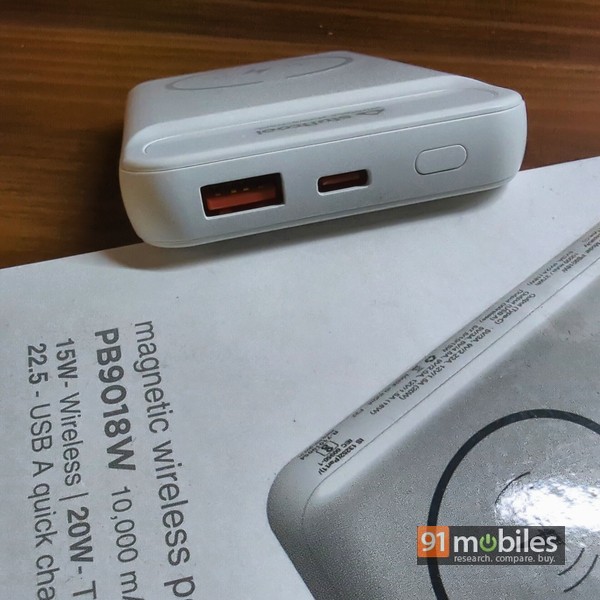 When it comes to wired charging, the StuffCool Magnetic Wireless Powerbank delivers up to 22.5W QC3.0+ via its Type-A port, and PD20W fast charging via its Type-C port. Samsung’s PPS super fast charging isn’t supported though. Do note that the same Type-C port works for input too, and the power bank can be fully juiced up in about 3 hours. If you want, you can charge your devices with it while it’s being juiced up. 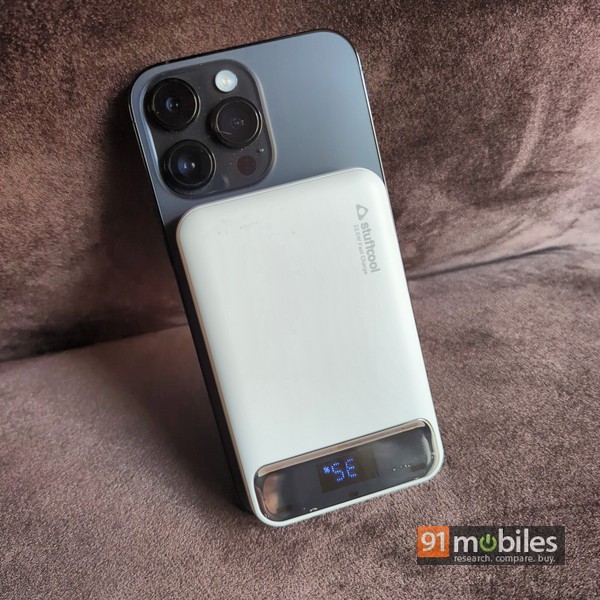 The Stuffcool Magnetic Wireless Powerbank carries a price tag of Rs 4,999, and does seem priced on the higher side when compared to others. But then again, it’s made in India, claims to have built-in safety protocols, and carries the Stuffcool promise as well. If you’re quick, you could avail of the special. limited-period Black Friday deal on it and snag it for Rs 4,241. The device does look like it could be prone to scratches and scruffs with regular use — the blue one could possibly fare better in this regard, but it’s tough to keep that mirror-finished strip clean.

In sum, it’s a compact, capable power bank that’s easy to carry and super convenient to use… and well worth a buy, especially if you’re an iPhone user.