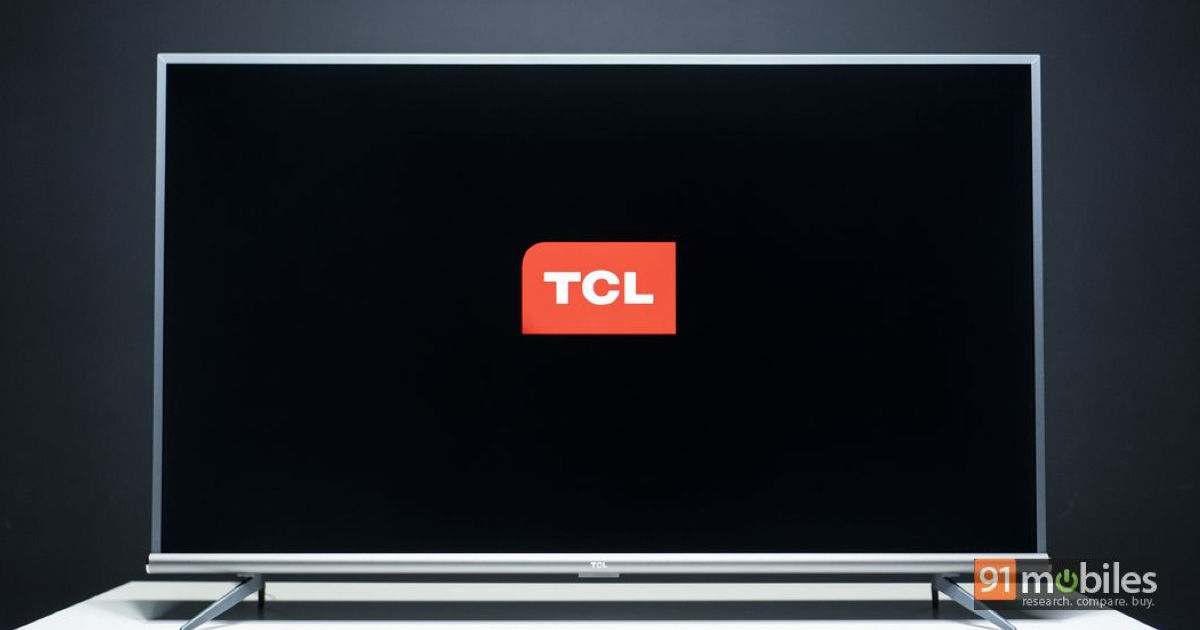 Say what you will about Xiaomi, but the company knows how to keep the competition on its toes. You see, the smart TV space was dominated by big-name brands until Xiaomi showed up with its reasonably-priced sets. Other OEMs followed into the footsteps of the company too and today, you can buy good quality 4K TVs without burning a hole in your wallet. Case in point, TCL’s P8E 43-inch panel, which comes loaded to the brim with compelling features and costs a hair shy of Rs 30K. I’ve been using the TV for a month and here’s why I think it should be your next buy. 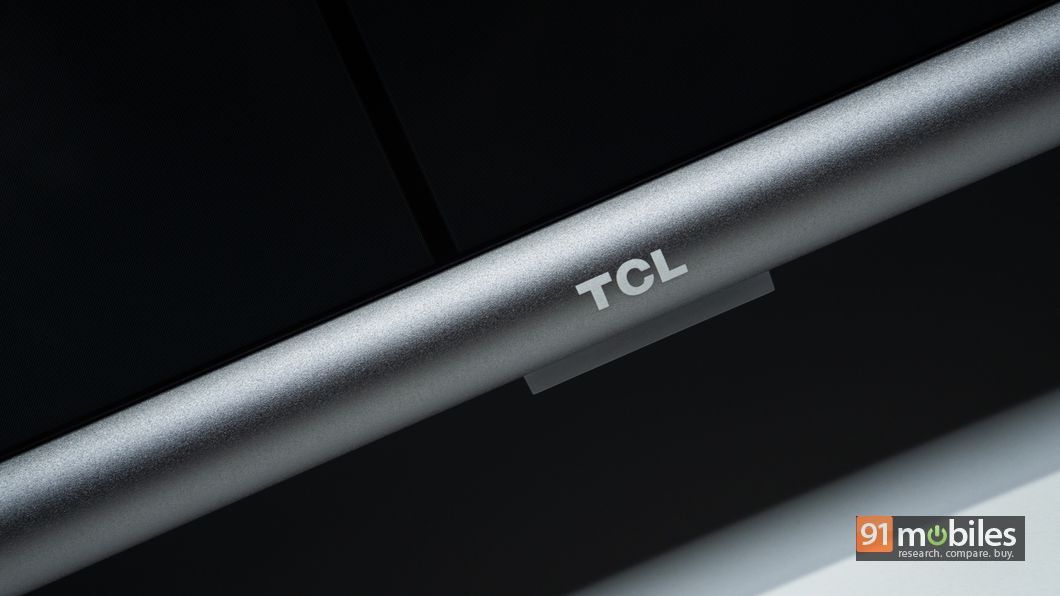 The TCL 43P8E cuts a handsome package and features a silver trim which canvases the edges of the display, lending the unit an elegant aesthetic. The 43P8E features a plastic back which, for the most part, offers a solid frame thereby reducing flex to a minimum. As a fringe benefit, it also keeps the 43P8E’s weight down too, thereby letting you mount/transport the TV on your own. Furthermore, while you will be spending the majority of time looking at the display, the 43P8E is quite sleek from the sides which adds to the unit’s overall look and appeal. 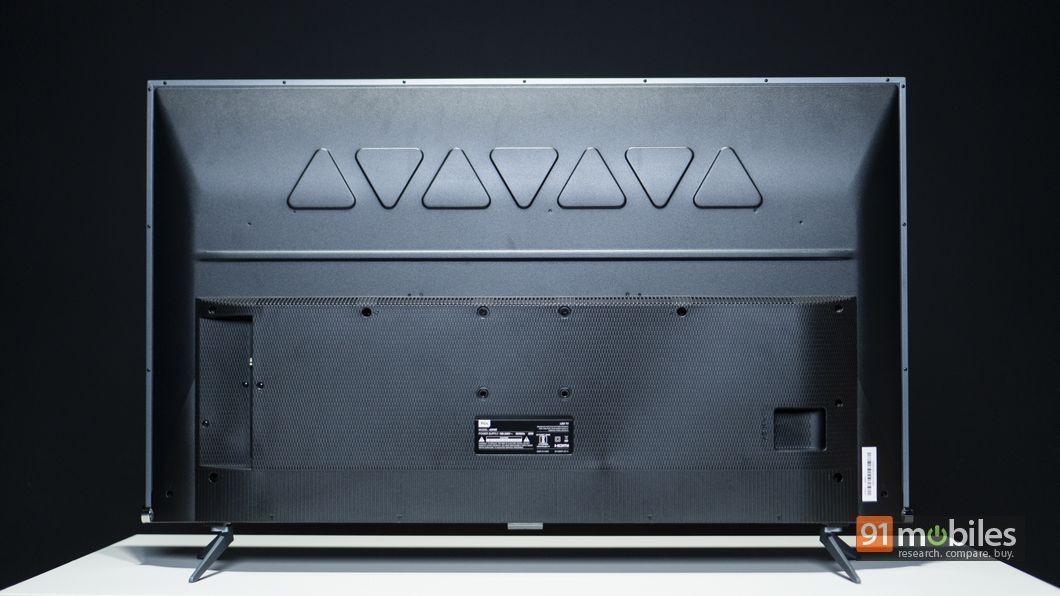 Interestingly, the TCL 43P8E doesn’t ship with any buttons on the unit itself and therefore, you’ll be interacting with the unit via the bundled remote. Now, before you sound the alarm, TCL does offer a fantastic mobile app dubbed the T-cast, which allows your smartphone to double-up as a secondary remote. Correspondingly, on the off chance you do misplace the original remote, you won’t have to sit and stare at a blank screen or cough up more money for a replacement. 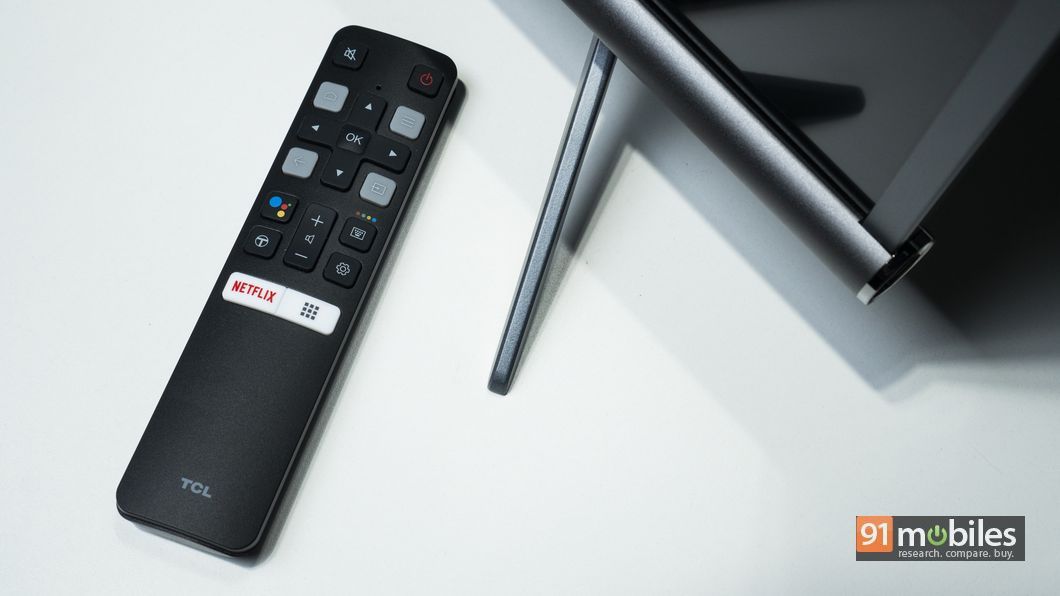 While we’re on the subject, allow me to briefly talk about the TV’s remote. Unlike traditional remotes, TCL’s 43P8E features a minimalistic controller with only a few buttons. Of those, I interacted the most with the d-pad to navigate through the system’s UI, the dedicated Netflix hotkey, toggles to increase/decrease the volume and the Google Assistant button, which allowed voice-based communication to the 43P8E. The buttons felt adequately tactile and since the remote connected to the TV via Bluetooth, I didn’t have to point it in the set’s general direction for my commands to be registered. 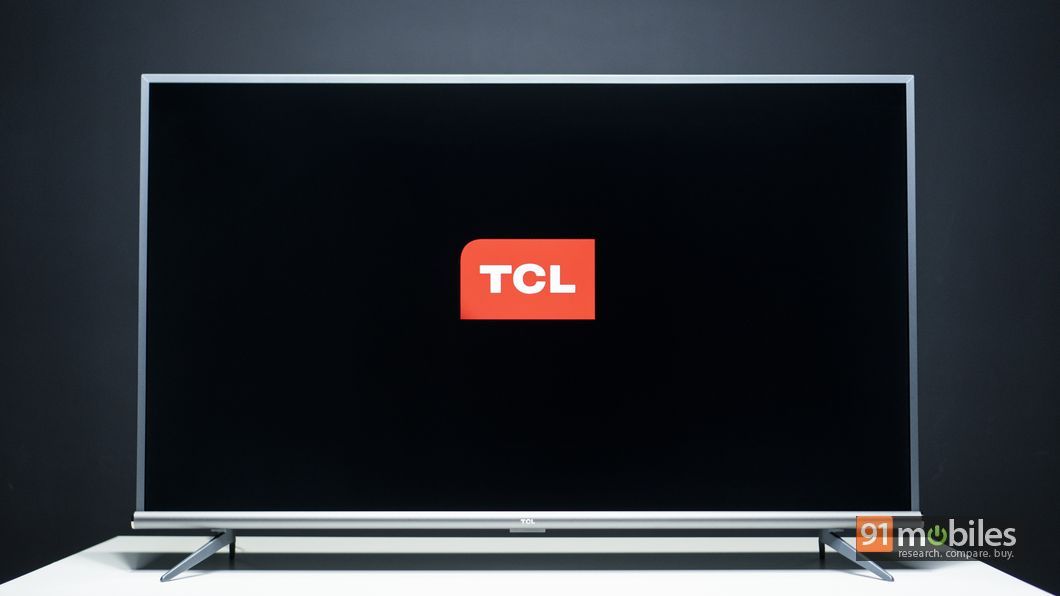 I’d also like to add that the model sent to me for review reportedly comes with support for far-field tech which enables hands-free controls. However, from what I can tell, the feature requires a separate dongle to work which didn’t come bundled with the TV set. Moreover, try as I might, I can’t find it listed online either so take TCL’s fancy marketing with a pinch of salt. 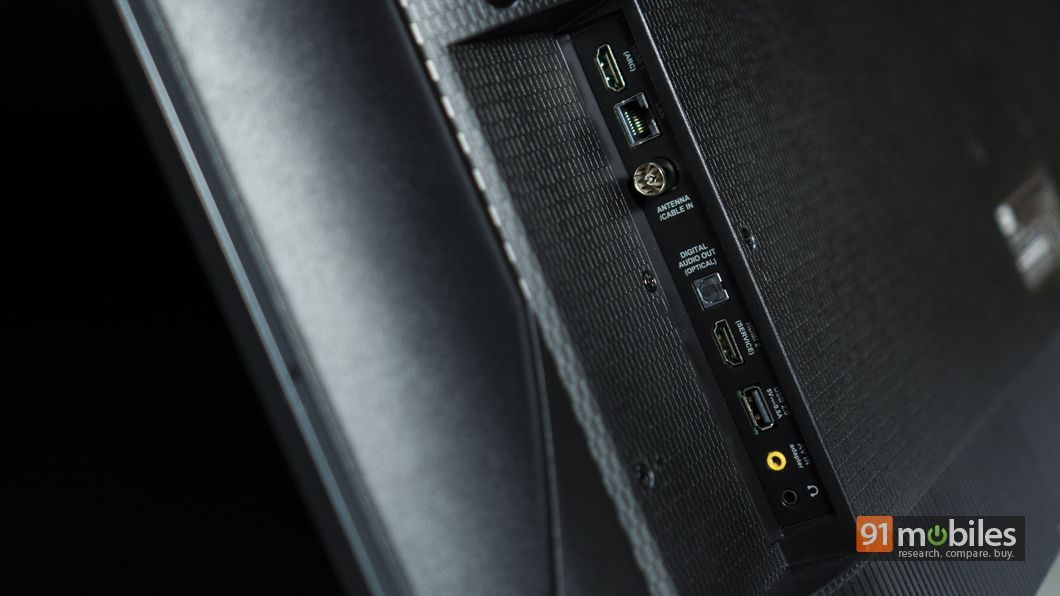 With that out of the way, let’s talk about ports. The TCL 43P8E features a slurry of connectors neatly tucked away towards the back including three HDMI ports, two USB Type-A ports, an AV-in slot, an Ethernet port, a Digital Audio port and a headphone jack. Thankfully, you do get an HDMI ARC port with the set and therefore, you’ll be dealing with fewer wires if you plan to say, route your console’s audio output to a soundbar paired with the TV. 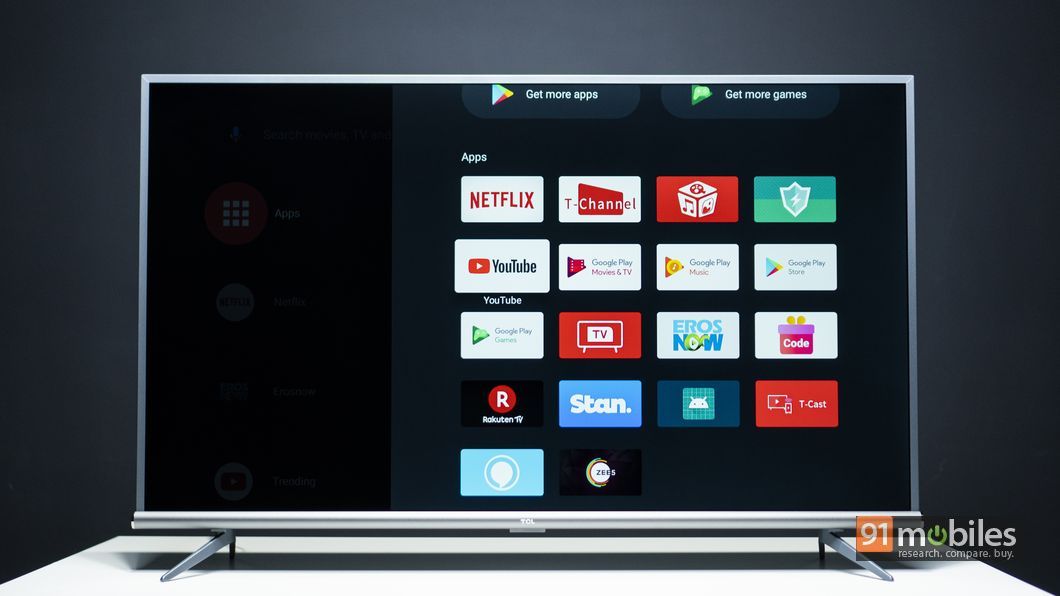 In the end, what sold me on the TCL 43P8E was its picture quality. To be clear, the TV’s 43-inch panel is not a game changer but, for its asking price, it gets most things right. The display is LED in nature, although under dimly lit scenarios, you will notice significant backlit bleeding creep in from the edges. However, that doesn’t mar the viewing experience all that much as it was only noticeable when I was navigating through the TV’s dark UI. 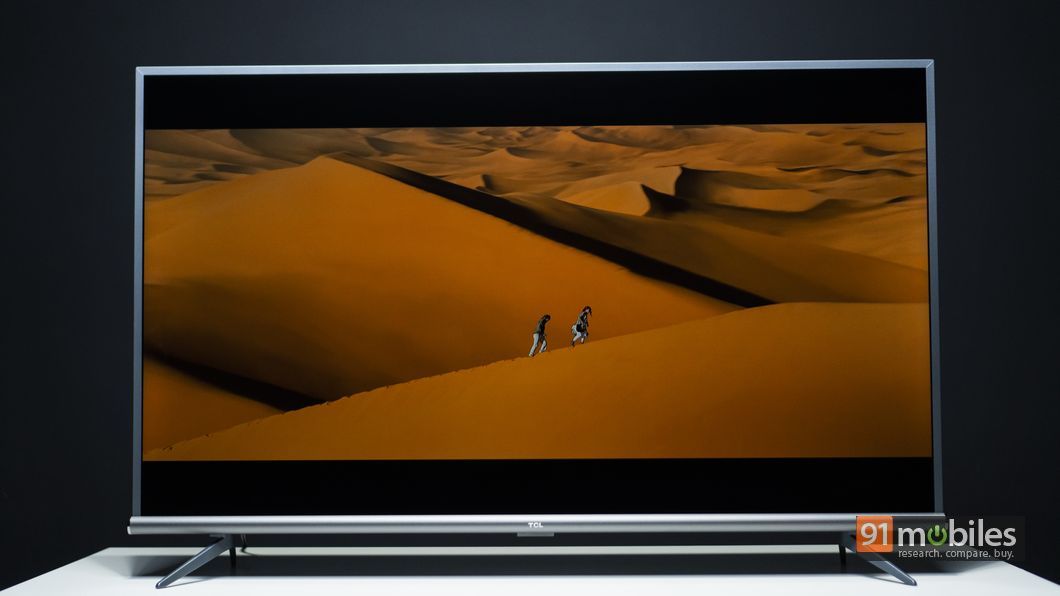 Apart from that, I can’t pinpoint any flaws with the panel – the display’s 4K resolution offers oodles of details, the viewing angles are solid and thanks to its HDR10 certification, you can feast your eyes to striking contrast on supported content. What’s more, while the company’s P8S series of flagship TVs are touted to ship with a bezel-less design, the 43P8E isn’t that far off either and the unit offered an immersive media consumption experience too. 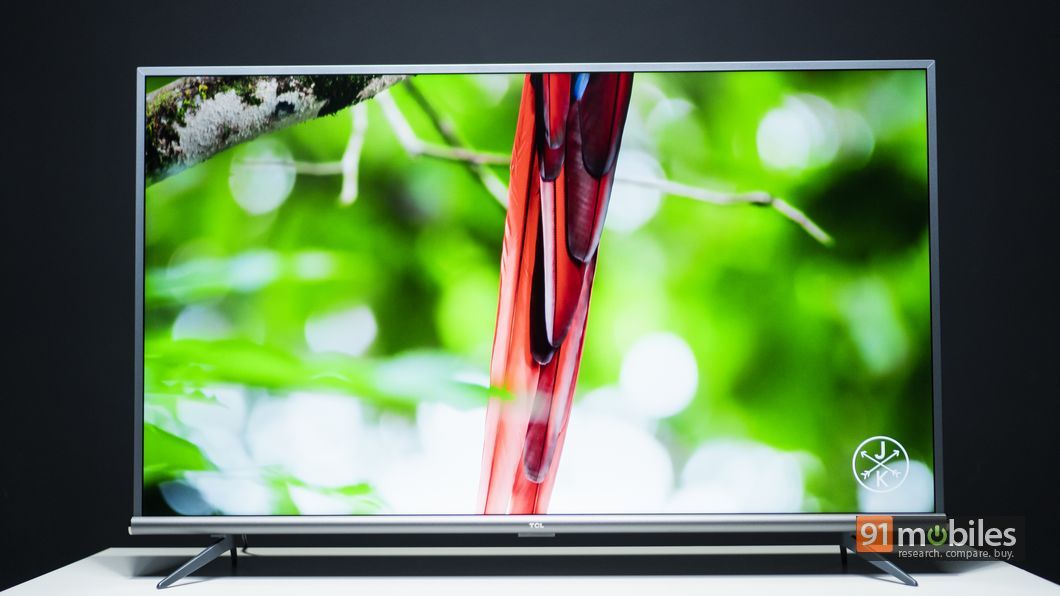 Despite offering a modest 20W audio output, the speakers on the TCL 43P8E get reasonably loud. More importantly, the audio output doesn’t falter at higher volume levels and at no time did I feel that the sound coming out of the speakers was distorted. On the flip side, the speakers don’t offer a lot of oomph in the low-end so you might have to invest in a soundbar to get the most out of your EDM playlist. 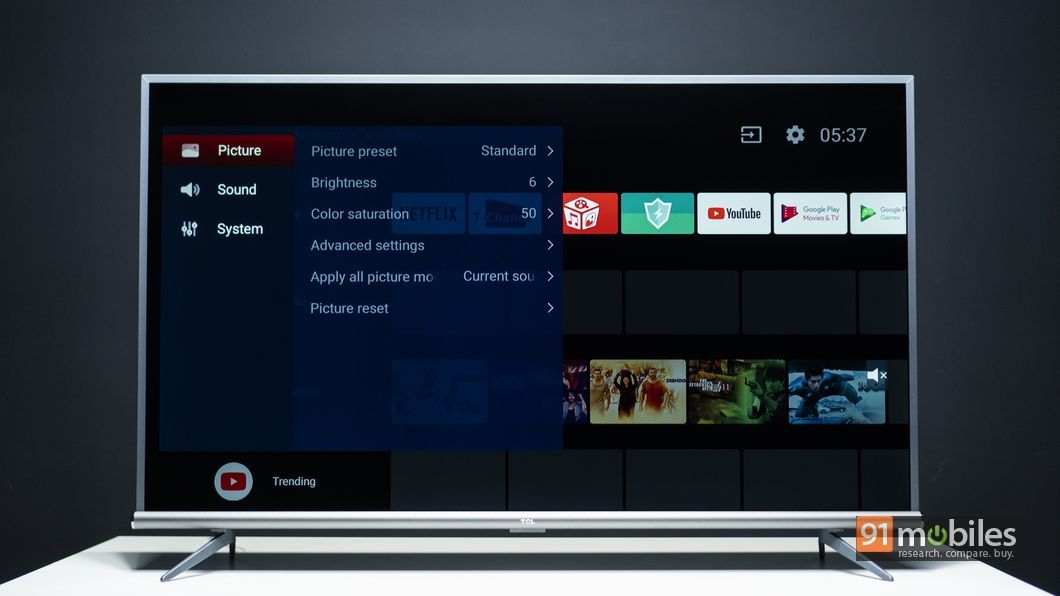 Driving the smarts on the TCL 43P8E is a quad-core processor that has been paired with Mali’s 470 GPU, 2GB of RAM and 16GB of built-in storage. The specs translate into a smooth end-user experience and the TV rarely ever stuttered whilst transitioning from one app to the other. As for the UI, the device boots Android TV and ships with official Google services like Play Store from the word go. Correspondingly, you won’t be locked to an iffy third-party app store and will be able to download a plethora of applications and games on the TCL 43P8E.

The TCL 43P8E retails for Rs 27,999 and for the price, offers an elegant design and a good panel. Furthermore, the TV comes with support for popular streaming services like Netflix and Amazon Prime and correspondingly, makes for a good buy for anyone looking to step into the world of 4K smart TVs. 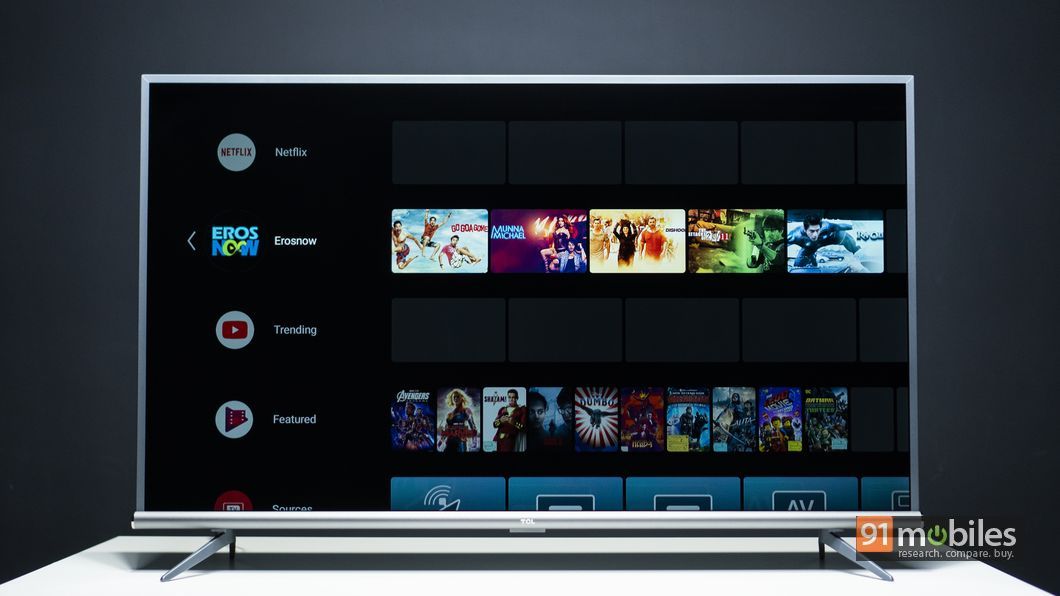 That said, buyers looking to save some cash can also look at VU’s latest Pixelight 4K TV, which costs Rs 2K less and offers more or less the same features albeit ships with a dated design. Regardless, if you were on the fence about buying the TCL 43P8E, then go ahead as you will not be disappointed.