TCL is a legacy electronics company that has been manufacturing and selling televisions, ACs, washing machines, refrigerators, and other devices for many decades now. Today, TCL is a household brand that is widely known around the world. The company is known in India as well, but it might not be as much in the spotlight as some of the other brands, especially in the television segment. TCL wants its products to speak for themselves and that’s what the brand is hoping for with the TCL C825 4K Mini LED 4K TV. The series comes in 55-inch and 65-inch sizes and we are reviewing the former today.

The TCL C825 4K Mini LED Android TV is a feature-rich TV that comes at an affordable price tag as far as premium TVs are concerned. The 55-inch model that we reviewed is priced at Rs 1,05,000 and it features a Mini LED QLED panel, up to 120Hz MEMC, 50W sound output from Onkyo that includes a 20W subwoofer, Android 11 OS, and more.

The TCL C825 Mini LED 4K TV is a great alternative to premium 4K TVs from Sony and LG. The TCL TV checks pretty much all the boxes as it delivers a great picture quality, bass-heavy sound, and smooth performance. With a price tag of Rs 1,05,000, it isn’t the most affordable, but you get your money’s worth. 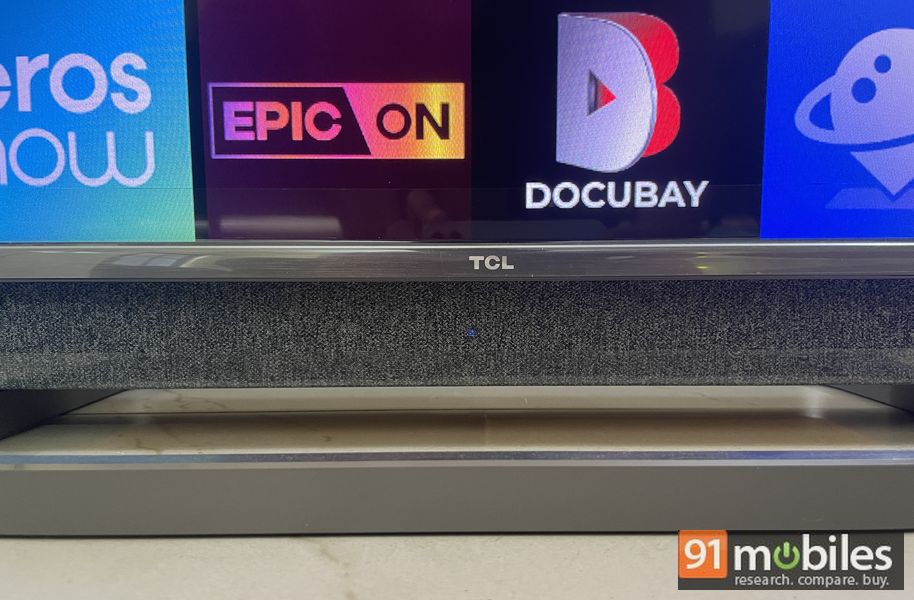 If we talk about the design first, the TCL C825 Mini LED 4K Android TV screams premium the moment you take it out of the box. It is a fairly heavy 55-inch TV that will require an extra pair of hands to help you move it around the house. The weight of the TV is also due to premium materials used like metal for the frame and for the solid rectangular stand. Just below the display, you get a large strip of front-firing speakers from Onkyo covered in a grey fabric that adds the overall premium-ness of the design.

Around the back, there’s a mound on the middle on top of which lies an Onkyo subwoofer to give you that punchy bass. The right and left side of the rear panel is flush with a glossy finish. There’s an indent on the top of the frame for an attachable camera that comes in the box. The bezels around the display are pretty slim, which means you’ll get an immersive viewing experience. 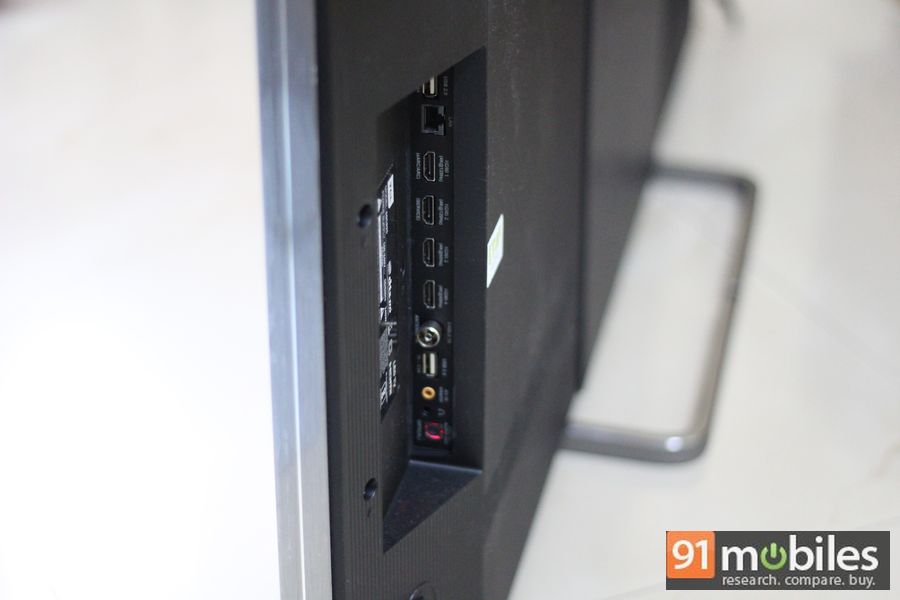 Connectivity options on the TCL C825 include four HDMI ports out of which two are HDMI 2.1, two USB 2.0 ports, an ethernet port, AV input, and audio output, among others.

The TCL C825 offers a Mini LED panel, which means it features thousands of pixel-sized LED backlights that allow for better brightness, contrast, and deeper black levels. The technology is seen on several high-end TVs and Apple has also used it on its new MacBook Pro and iPad models as well. Mini LED tech ensures that the backlight bleed that is often seen on LCD screens is minimised. 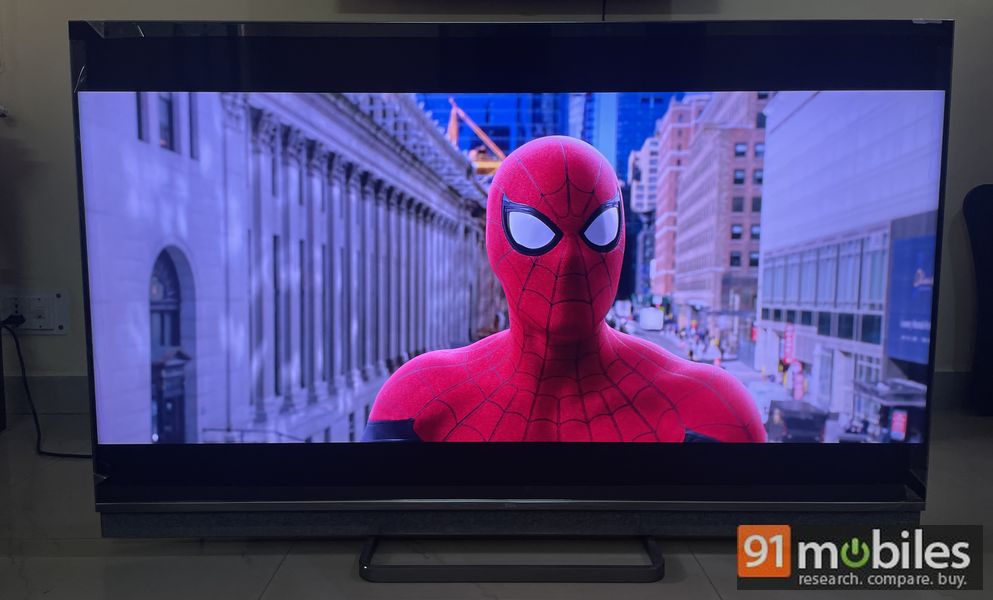 Suffice it to say that the Mini LED panel on the TCL C825 means you will see stunning picture quality when watching 4K content. Whether it is on Netflix, Prime Video, or Hotstar, the television delivers crisp video with plenty of brightness and contrast. Dolby Vision content like Spider-Man: Far From Home or Shang-Chi and The Legend of The Ten Rings were a delight to watch. You can work with several presets or go into advanced custom settings to choose the right display calibration for you.

The TV is capable of upscaling HD content, but it doesn’t do an exceptional job at it as I found plenty of noise when watching some of my favorite old shows like House MD or Seinfeld. The TV also supports up to 120Hz MEMC, which reduces motion blur. It works great for sports content, not so much for movies. 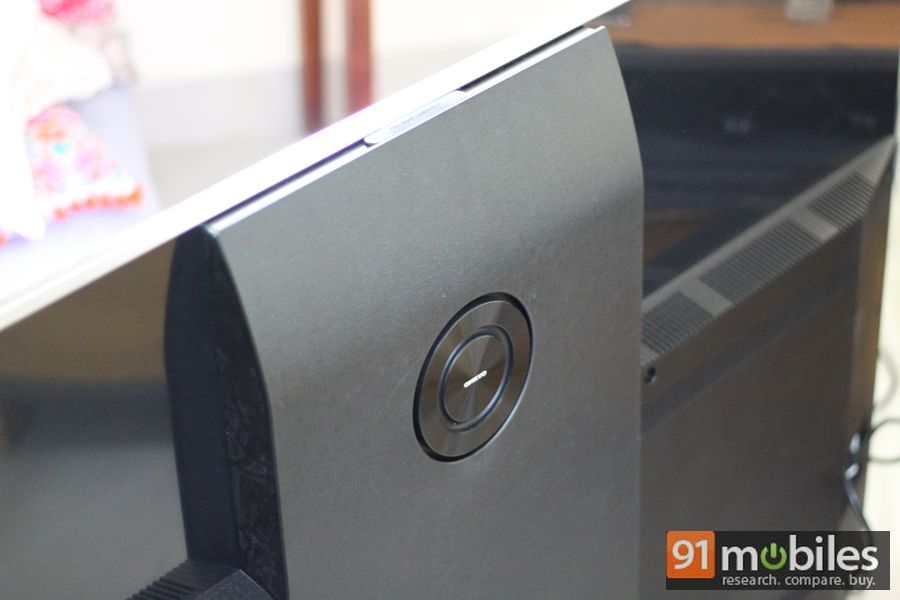 This is a terrific TV for gaming. I hooked up my PS4 Pro and instantly felt depressed that I did not own a PS5 with ray tracing to really take advantage of the TV’s display. Still, swinging around as Spider-Man never looked so good and the stellar bass while playing Call of Duty was thoroughly satisfying.

However, the picture quality is only half the picture (heh). What really completed the experience of watching Shang-Chi and its terrific soundtrack was the sound system on the TCL C825 provided by Onkyo. The fight scene on the bus was spectacular to watch and experience with the song ‘Run It’ thumping loud and hard from the TV’s subwoofer. The subwoofer does offer that kick you need when watching action movies but it can overpower the vocals often. You have several sound modes to choose between to find the right output for the kind of content you’re watching. 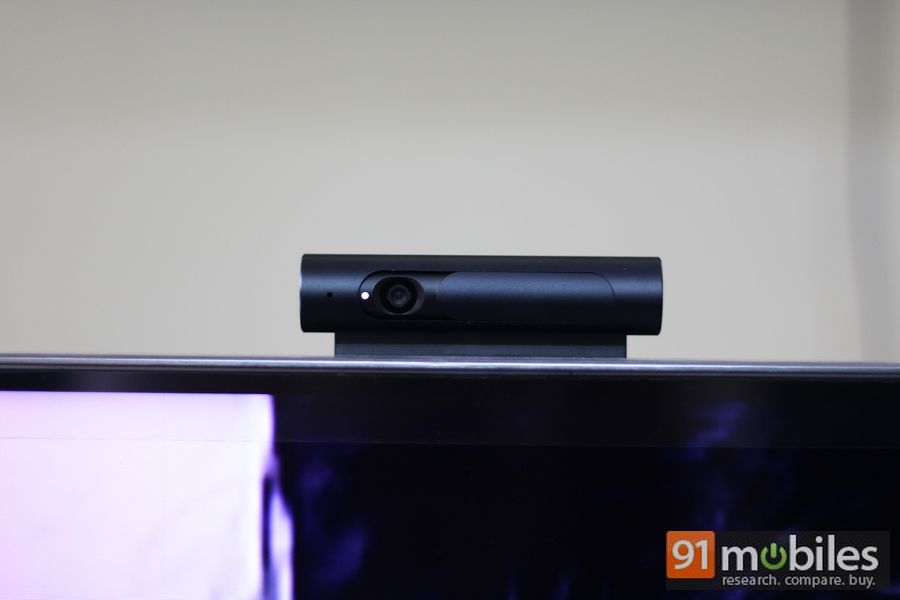 If I haven’t made it abundantly clear already, this is an Android TV! It runs on Android 11 out of the box and the interface is quite friendly. It is a stock UI interface with access to popular OTT apps and Google Play Store from where you can download even more apps. The TV supports Chromecast built-in as well. 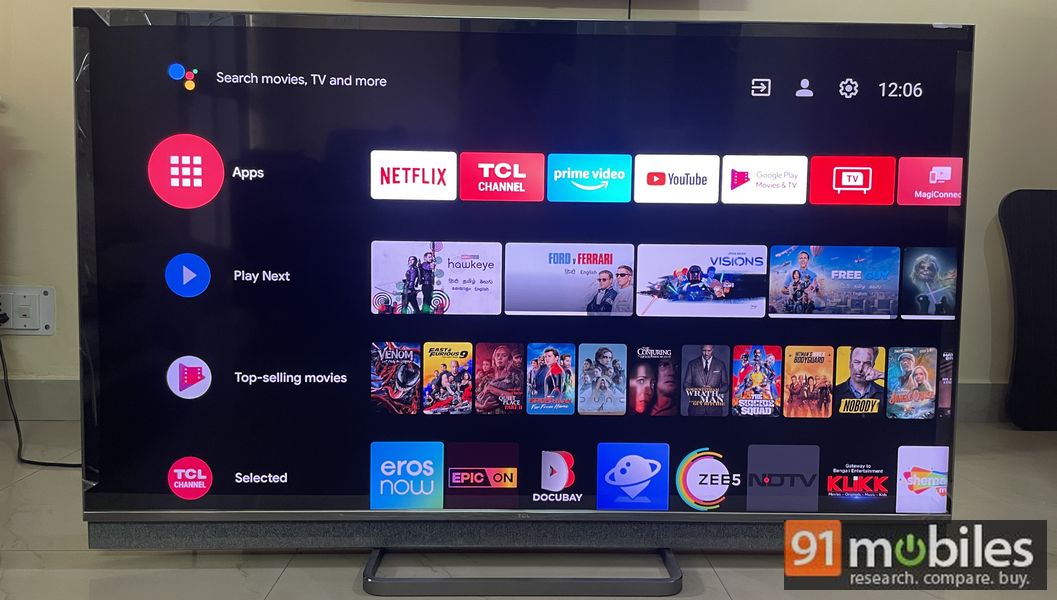 Thanks to the quad-core MediaTek chipset with four A73 cores paired with 3GB of RAM, the TCL C825 Mini LED 4K TV runs like a breeze. During the review, the TV didn’t show any lag, and browsing through the UI felt swift and smooth. With enough RAM onboard, apps stay open in the background longer so switching on the TV and running an app felt extremely quick. The remote for the TCL C825 Mini LED 4K TV is pretty tall, which means all the buttons aren’t easily reachable without adjusting your grip. Aside from the number keys, power button, volume control, and directional keys, the remote also comes with dedicated buttons for Netflix, Zee5, Prime Video, and TCL Channel. There is also a Google Assistant button for voice search.

The TCL C825 Mini LED 4K TV ticks all the right boxes and offers you everything you could need from a high-end 4K television, and more. At Rs 1,05,000, you get a brilliant Mini LED display that is bright and offers excellent contrast. You also get solid 50W speakers, including a subwoofer from Onkyo, so you won’t need a separate soundbar. The TV also looks the part of a premium TV and it delivers a smooth, lag-free performance.

That said, the sound output leans towards bass and it can overpower vocals often. If you’re looking for a premium TV with more balanced sound output, you might want to consider something from Sony or LG. The TCL TV also does an average job of upscaling SD content and it doesn’t do a great job with skin tones and colour saturation. But these are minor issues for what is otherwise an excellent TV that gives you your money’s worth.