If I hand you an unnamed smartphone right now, chances are you’ll open the camera app first and base your initial impressions of the phone by what you see on the viewfinder. The smartphone in question could be powered by the speediest chip or have the best display in the business, but you’d still be drawn towards the camera specs of the phone like a moth to a flame. 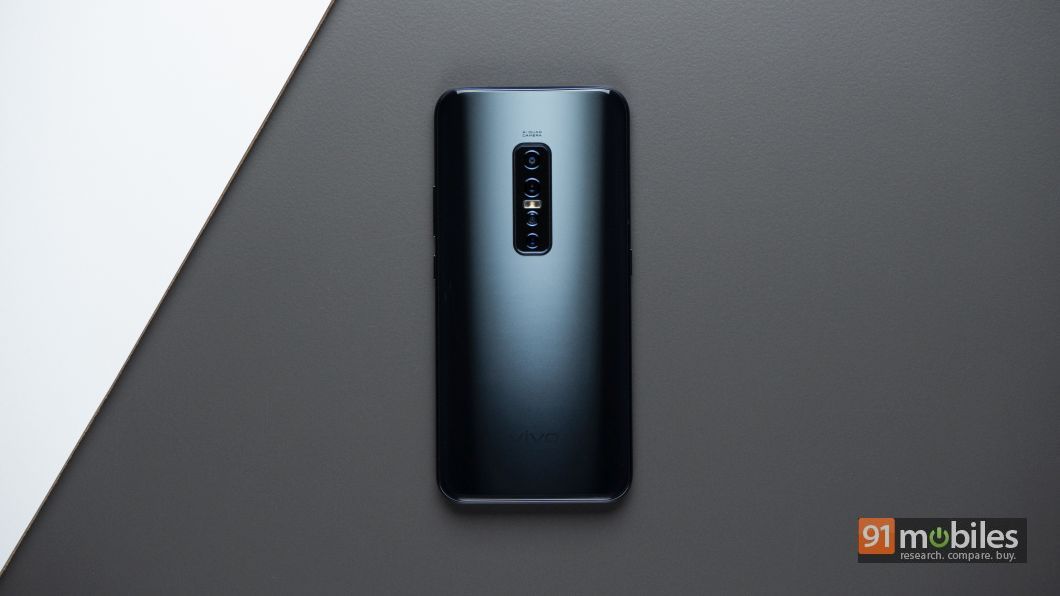 To capitalise on a consumer’s need for a good camera phone, smartphone brands have started offering devices with multiple cameras which can shoot across a variety of scenarios. The latest device to boast such versatility comes from Vivo’s stables in the form of the V17 Pro, which features a quad-camera setup at the back along with a dual pop-up selfie camera up front. So, the question remains – just how good are the cameras? And how does the phone fare in general? Let’s find out in this full review of the V17 Pro.

The Vivo V17 Pro is first and foremost, a chunky phone. In fact, at over 200 grams, the handset is among the heaviest devices I’ve reviewed in a while. Now, the added heft of the device can be accredited to its beefy battery and its pop-up selfie-camera mechanism, but rest assured, you’ll feel the handset in your pockets when you’re out and about. Thankfully, the phone is quite ergonomic and its curvy back ensured that I never had to worry about dropping the phone. Be that as it may, if you’re still concerned about making a dent on the phone, then Vivo does bundle a protective case with the device. The case is an all-plastic affair and adds a few grams to the phone’s heft, but, it will most assuredly put your mind at ease when handling the V17 Pro.

That said, the case is extremely hard to take off, so you’ll have to be patient when you’re removing it. Coming back to the design of the handset, the V17 Pro is available in two colours, including a Glacier Ice and Midnight Ocean. Now, I can’t attest to the former, but my review unit is a huge fingerprint magnet and I was struggling to keep the device in pristine condition. I’d also like to add that unlike most devices in its price range, the display of the phone doesn’t merge seamlessly into the frame and instead, rests on a separate trim. All in all, the design of the phone didn’t quite leave me with a smile until I used the smartphone’s front-facing camera. 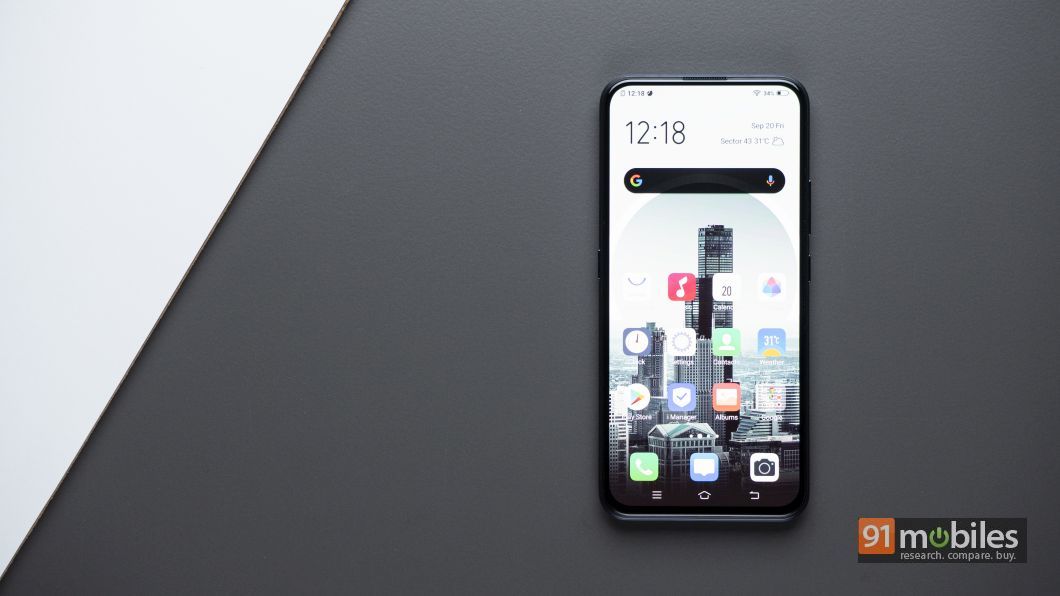 You see, the V17 Pro’s claim to fame is its dual front-facing pop-up cameras, which take up space on a wide slate rising from inside the smartphone’s chassis. Unlike other elevating camera modules, the one on the V17 Pro is oddly captivating and it feels remarkably sturdy too. The mechanism is quite stiff and correspondingly, there’s no flex on it either. The only downside of the V17 Pro’s selfie-camera mechanism is that you can’t use it for face unlock. 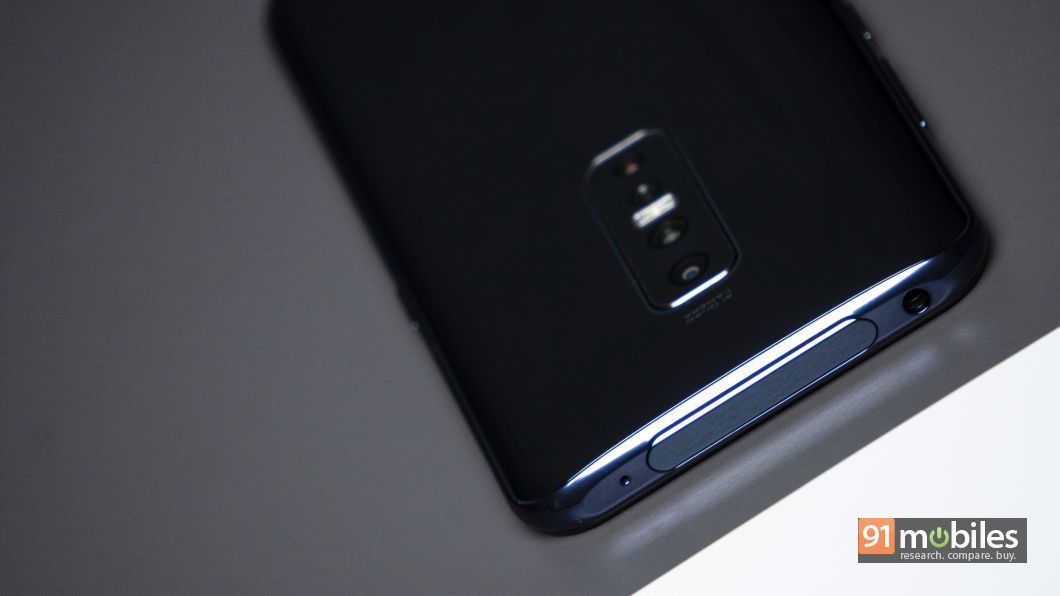 Instead, the company offers something called an ‘assistive facial recognition’ with the device, which kicks in should the smartphone fail to recognise your fingerprints thrice in a row. Now, whether that’s been done to preserve the module’s longevity is anyone’s guess. However, I never had any use for the feature as the in-display fingerprint sensor did its job well – the scanner was quick to recognise my fingerprints and rarely ever faltered during my testing. 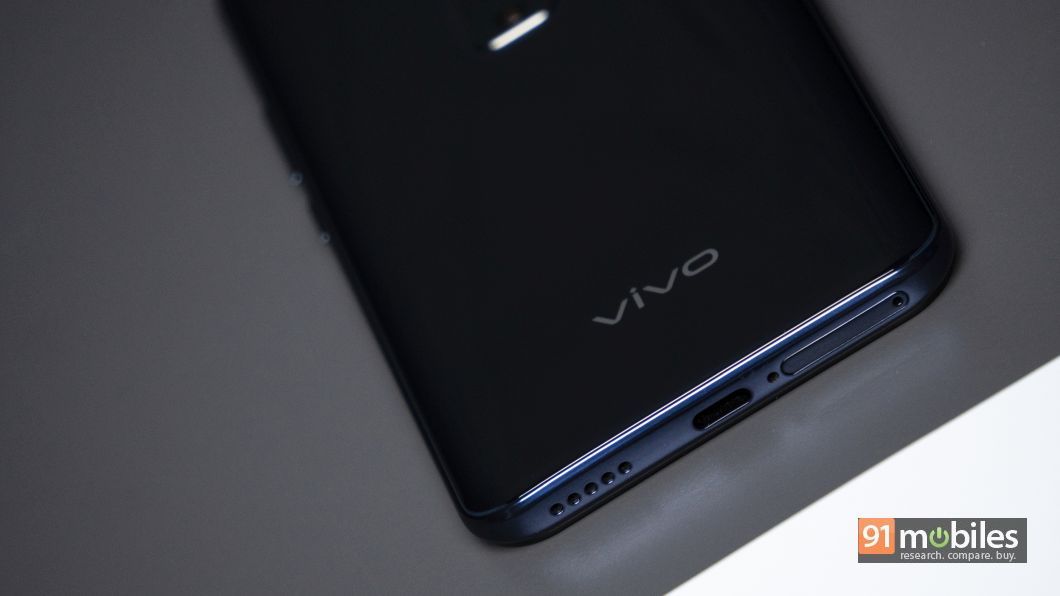 Vivo is among the dwindling breed of manufacturers which still offer a headphone jack with their devices and the V17 Pro is no different. Moreover, buyers opting for the phone will also get a pair of 3.5mm earphones in the retail packaging, which is great. I’d also like to mention that the smartphone ships with a USB Type-C port at the bottom, which is compliant with the brand’s 18W fast-charging standard. Lastly, the phone features a dedicated button to bring up Google Assistant on its left fascia, which you may or may not find useful. Unfortunately, you cannot reprogram the key to open a different app, which is a bummer. 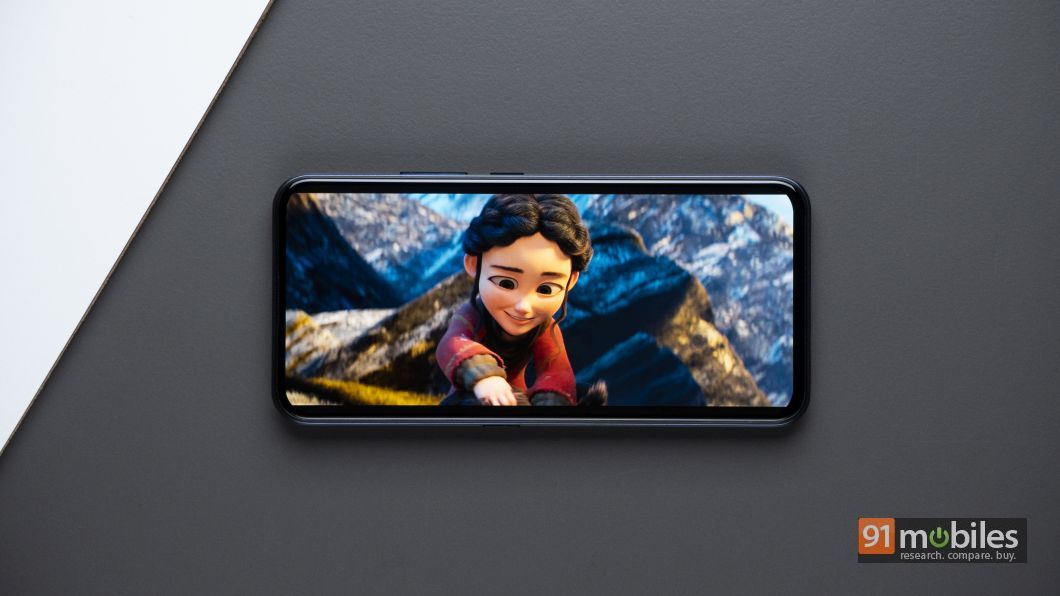 Coming to the display, the Vivo V17 Pro features a 6.44-inch panel with an immersive 20:9 aspect ratio. The display is backed by Super AMOLED tech and packs in a FHD+ resolution. And before you ask, yes, the panel does come with WideVine L1 certification, meaning you will be able to stream hi-res content from services like Netflix.

As for the quality of the display, it’s about as good as it gets – the colours appear vibrant, the viewing angles are wide enough to use the screen as a portable theatre when you want to watch a movie with friends and the panel gets adequately bright and dim too.

The V17 Pro’s USP is its cameras, and the handset ships with not one, not two but a total of six imaging sensors. You’ll find four of those six positioned towards the device’s back, aligned neatly in a vertical column whereas the rest of the two shooters take up space on the elevating selfie-camera mechanism. Spec-wise, the smartphone’s rear camera setup comprises a 48MP Sony IMX 582 sensor, an 8MP wide-angle lens, a 13MP telephoto lens with 2x optical zoom and 10x digital zoom capabilities and a 2MP depth sensor. For selfies, the device utilises a 32MP main selfie camera which is assisted by an 8MP wide-angle shooter. Interestingly, both, the front as well as the rear camera setups ship with their separate flash modules. I’ve been testing the smartphone’s cameras for the better part of a week and for the most part, the V17 Pro doesn’t disappoint in the imaging department. I’ve summed up my experience in the form of bullet points below, so take a gander –

1 – The Vivo V17 Pro is a phenomenal pocket camera and I managed to click some brilliant shots with the device during my review period. The smartphone performed well across a wide variety of scenarios and long story short, will rarely ever disappoint you once you’ve clicked the shutter button.

2 – Daylight shots on the phone look beautiful, and I particularly liked pictures from the 48MP sensor. The main shooter clicks images which are true to life and therefore, the greens in my garden actually looked green for a change. What’s more, you can boost up the details in the photos by shooting images in the full 48MP resolution, however, the caveat is that you won’t be able to club other modes like HDR and AI scene detection on top of it.

3 – The V17 Pro’s wide-angle lens is, once again, a thing of beauty. In fact, I liked the colour science of the wide-angle lens just as much, despite its tendency to dramatise a shot. Moreover, shots from the sensor didn’t distort towards the edges and there was minimal fisheye effect in the photos too. 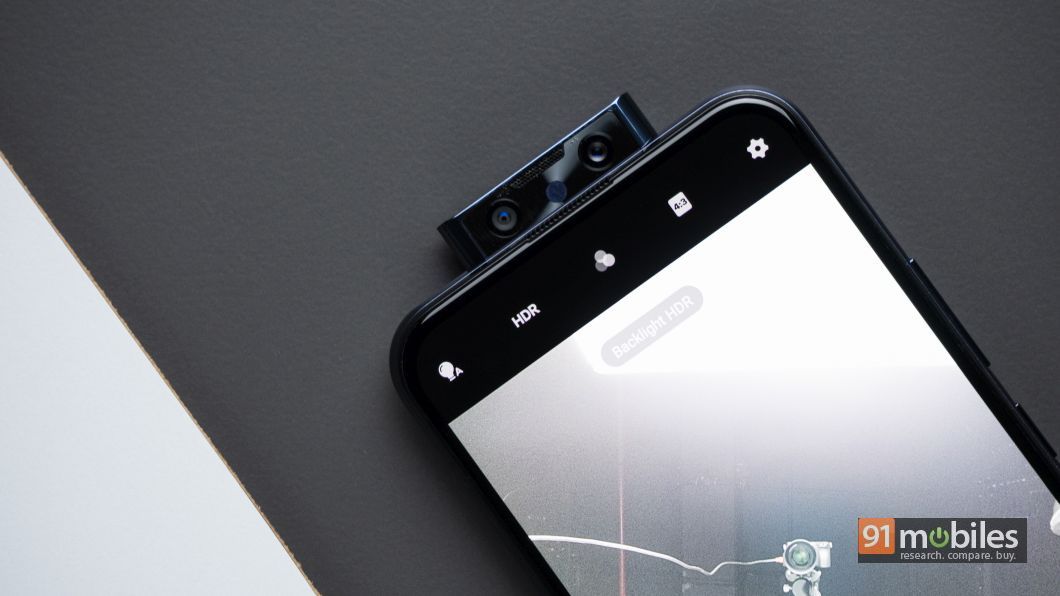 4 – As for lowlight images, the V17 Pro is as good as it gets. I recently took the phone with me to a restaurant at night and even without the night mode enabled, the phone managed to squeeze out the details from the shadows of the surrounding areas. With night mode turned on, the phone didn’t blow up the highlights from light sources like a lamp and brightened the entire scene in a way which looked pleasing and not heavily edited to the eyes.

5 – I click a lot of selfies on a day to day basis and I can tell you that the V17 Pro’s dual-selfie cameras are quite possibly, the best in the business. The cameras take excellent photos which are rich in details, offer pleasing colour tones and are always properly exposed too. What’s more, the selfie-camera apparatus features a dedicated LED flash module too, so you’ll be able to getaway with a stunning selfie at all times during the day.

6 – The V17 Pro also features a macro lens, which to be fair, is better than the ones I’ve tested on devices from Honor’s stables. However, the lower resolution of the shooter makes it so that the images blur the instant you zoom in. Regardless, the sensor comfortably locked focus on tiny objects and if anything, is a cool feature to flaunt.

You can drool over the camera specs all you want but at the end of the day, your smartphone isn’t just a replacement for your ageing point and shoot camera. You’d be doing a multitude of things on your new phone, including playing games, watching movies and running various apps at the same time. Now, to ensure everything’s working smoothly, you’ll need a powerful CPU and a healthy amount of memory. On that note, the V17 Pro is backed by Qualcomm’s Snapdragon 675 processor which has been mated to 8GB of RAM and 128GB of built-in, user-expandable storage. 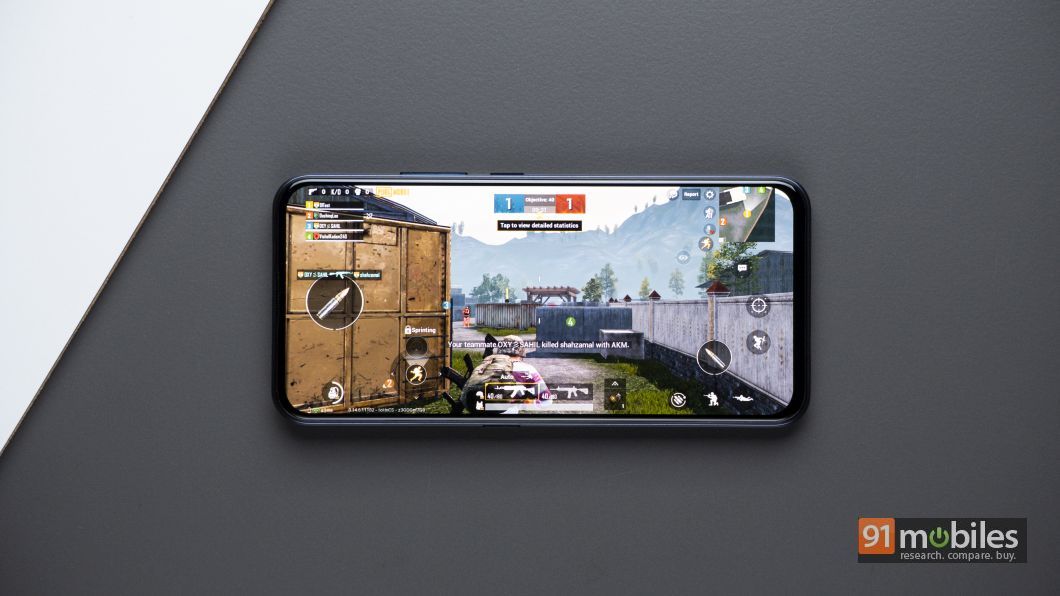 Now, while the Snapdragon 675 is a fairly capable processor, I feel that the company should’ve at least opted for a 7-series chip from Qualcomm’s stables to better justify the V17 Pro’s asking price. In fact, for Rs 1K less, you can instead get your hands on the Redmi K20 Pro, which offers the industry-leading Snapdragon 855 chip. 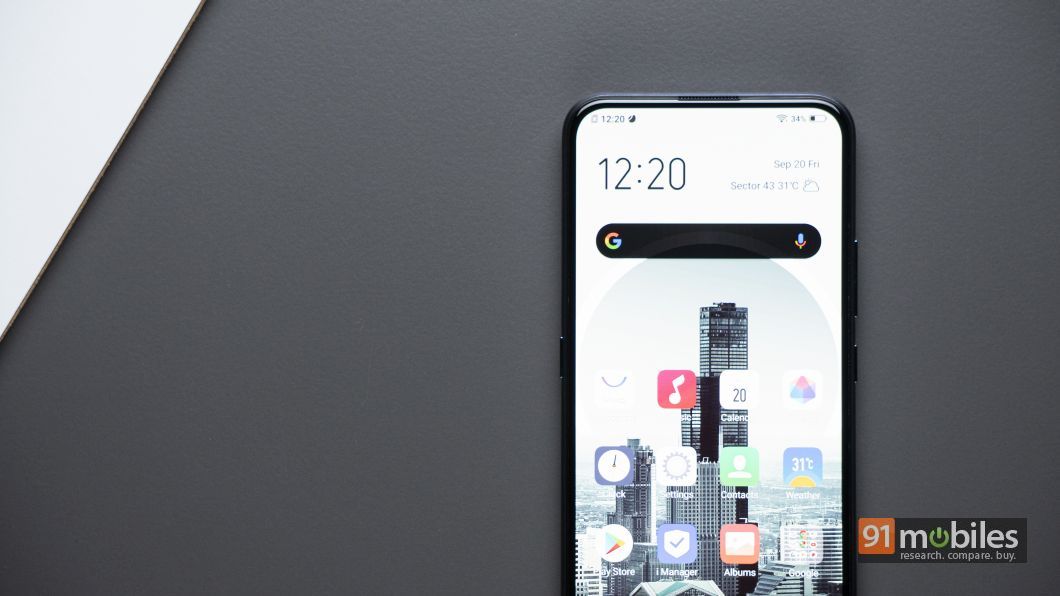 I’ll reiterate, the Snapdragon 675 processor isn’t shabby either and during my time with the V17 Pro, it held up well – apps opened relatively quickly, multitasking was lag-free and I could even play games like PUBG smoothly on the phone by lowering the graphics settings a bit. But, opting for a higher-tier CPU would’ve increased the handset’s longevity and would have improved its imaging prowess too. How, you might ask? 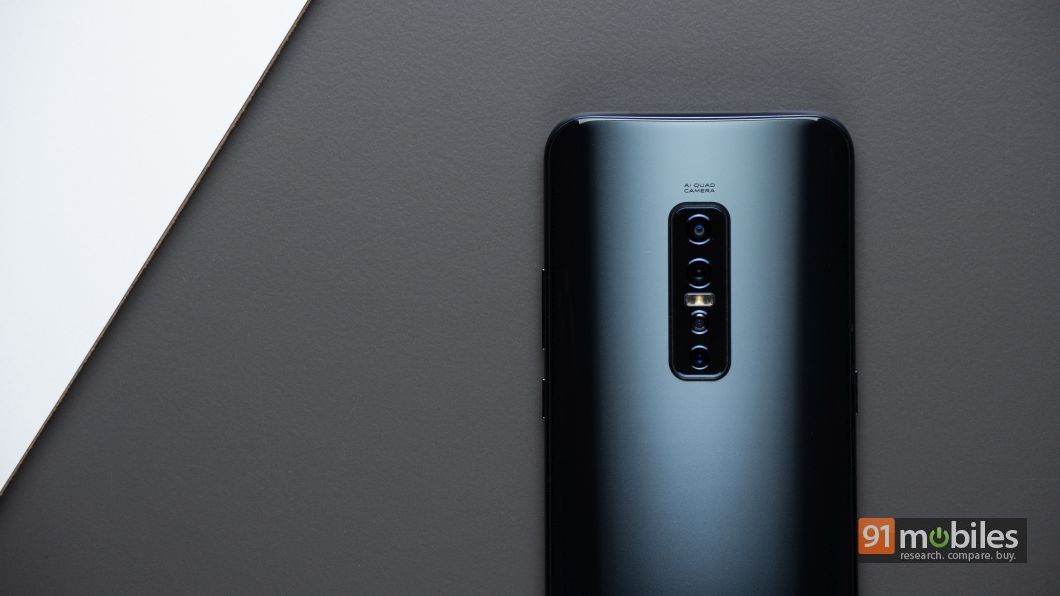 Well, each SoC ships with an ISP or an Image Signal Processor which varies in capabilities depending upon the class / tier of the accompanying processor. Therefore, while the Spectra 250L ISP can record 4K videos at 30fps on the V17 Pro, the Spectra 380 ISP backed Snapdragon 855 processor can up the framerate to 60fps on devices like the Redmi K20 Pro. For a camera-focussed phone such as the V17 Pro, I hoped the company would do better. 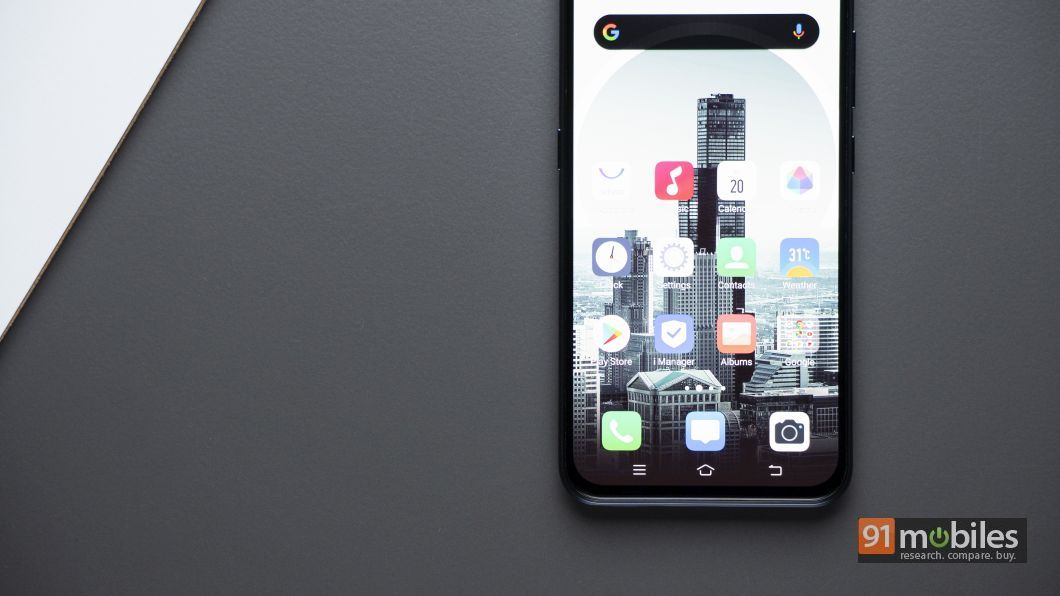 As for software, the V17 Pro ships with FunTouch OS v9.1 on top of Android Pie. I’ve already covered the software features in detail when I reviewed the company’s Z1X so make sure to check that out. To summarise, you can look forward to a heavily-themed skin with custom icons, support for themes, a dedicated dark mode, gesture-based navigation and a wealth of other features including more on-screen gestures to take a screenshot or turn on the flashlight and a motorbike mode. 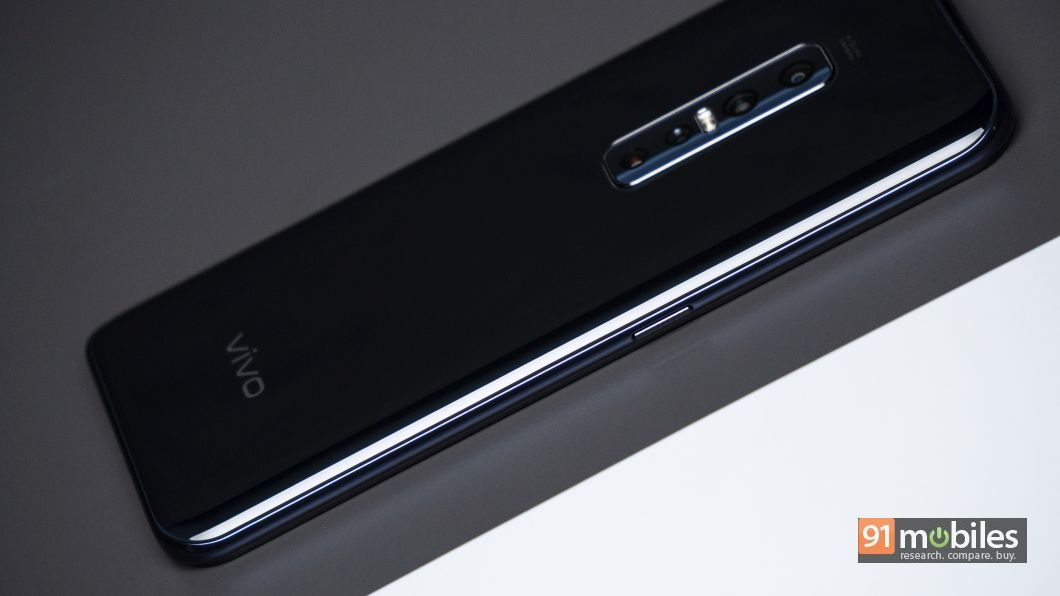 On the bright side, the V17 Pro is a tough device to drain. The handset is fuelled by a 4,100mAh battery which comfortably lasted me through the end of a heavy work day. This could be in part due to the battery-efficient chip powering the phone, but regardless, I always hit the bed with at least 20-30 percent juice still in the tank. To give you a better picture, the handset lasted 20 hours in the battery loop test, which is fantastic.

The Vivo V17 Pro is a great phone, but at Rs 29,990, not a practical buy. While I thoroughly enjoyed testing the phone’s cameras and not having to worry about the battery running low during the middle of the day, it’s hard to look past the smartphone’s sub-par performance. What’s more, for Rs 1K less, you can instead opt for the Redmi K20 Pro (review), which offers better rear cameras, similar battery life, a subjectively better design and much superior performance to boot. 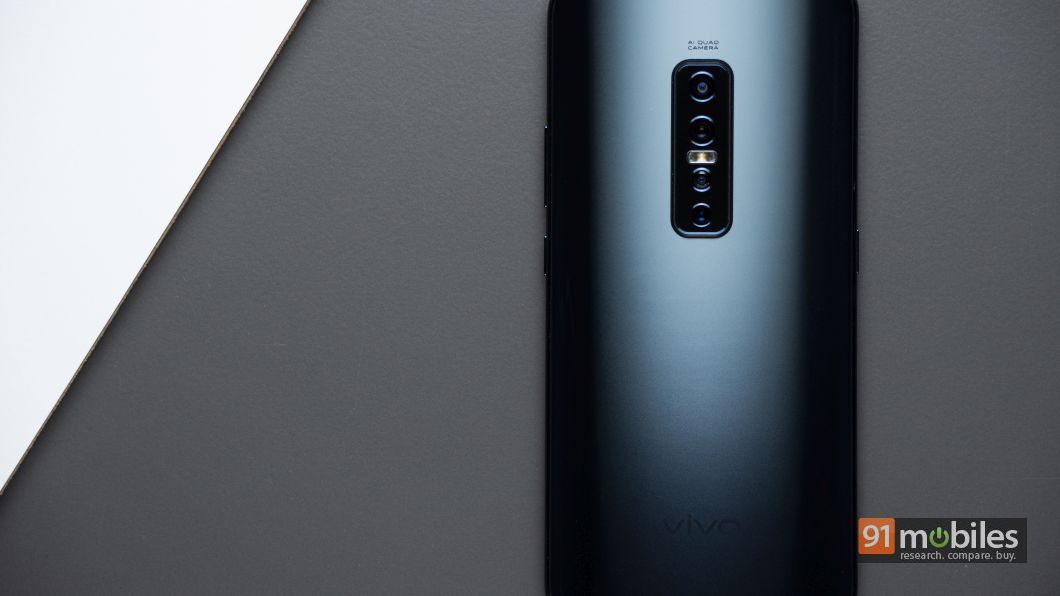 Correspondingly, I feel that the price of the V17 Pro is letting it down and should the company had priced the phone around the Rs 22K mark, it would’ve been a no-brainer. But, as things stand, the V17 Pro’s quirky dual-camera pop-up design isn’t enough to justify its asking price.