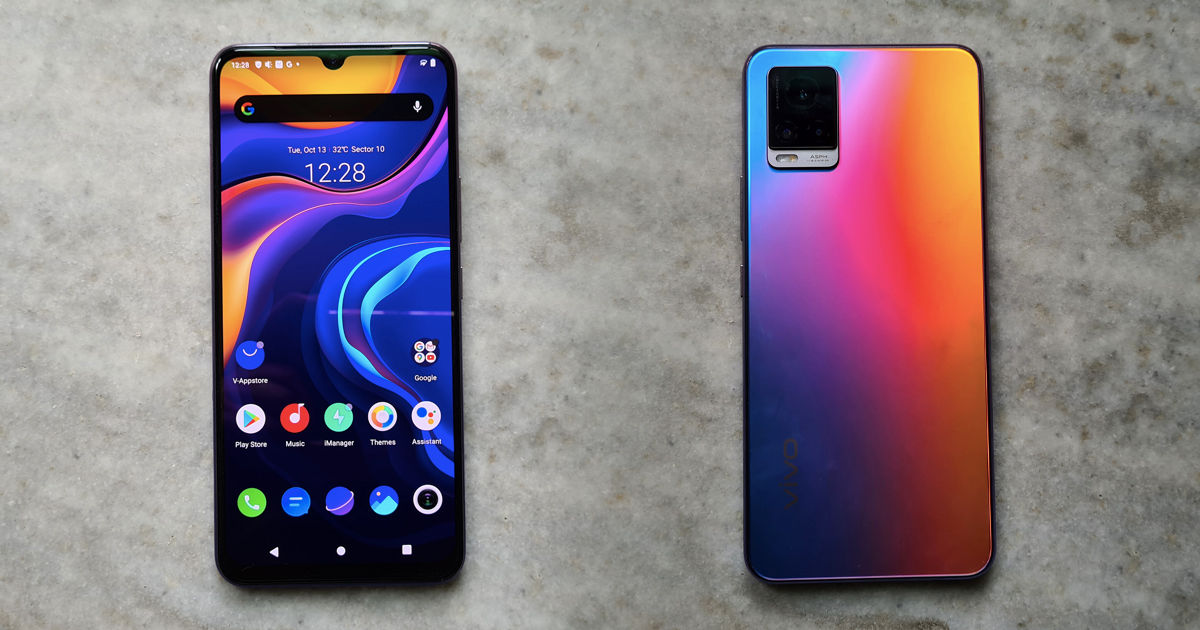 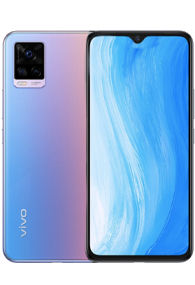 Vivo has just announced its latest smartphone in the mid-range segment called the Vivo V20 in India, with the pricing starting at Rs 24,990. The device takes over from the Vivo V19 (review) launched about 5 months back and as usual the company’s focus area is the camera department. Specifically, the V20 packs in a huge primary sensor and has some nifty features on the front snapper as well. Over time the mid-range market for smartphones has become a battleground to deliver somewhat flagship-level hardware at affordable price points. While at first glance, the Vivo V20 doesn’t appear anything out of the ordinary, the device is definitely worth a second look. 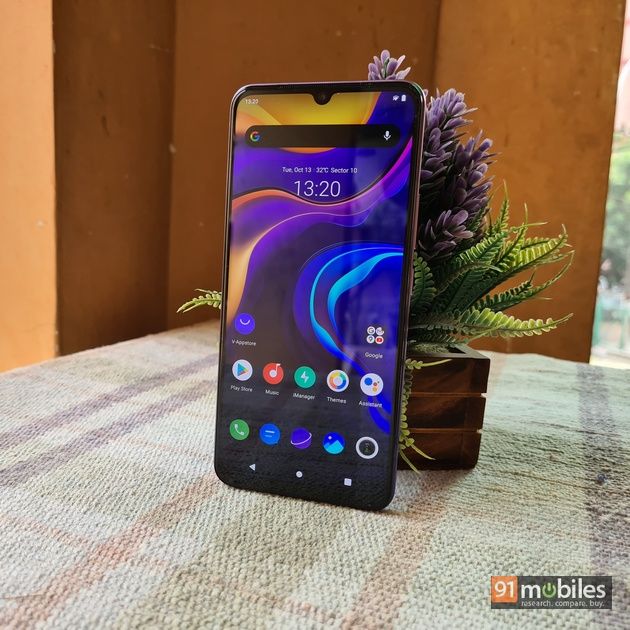 The Vivo V20 is easily one of the slimmest phones in the market right now, with 7.38mm of thickness. Apart from the very slight protrusion of the camera housing, the V20 is a seamless slab of glass. Vivo calls this the AG Matte Glass finish, which is something that was also seen on the more expensive Vivo X50 (review) series as well. I have received the Sunset Jazz colour option which is a delightful mixture of orange and blue colour gradients, giving an impression of a sunset over the horizon. Along with a slim design, the device weighs in at 170g which provides it with an easy in-hand feel. The frame of the phone gets a matching finish as the glass back but the former is made from a glossy polycarbonate material. It is refreshing to see a 3.5mm headphone jack being accommodated despite the thin chassis. Apart from that, on the bottom, there is also your standard Type-C port and speaker grille. On the side are a textured power button and a polished volume rocker while the dual-SIM + microSD slot is on the left. 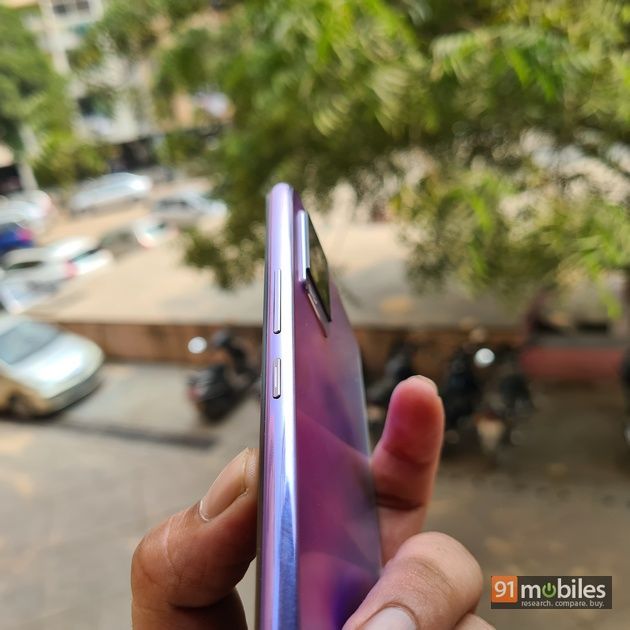 On the front is something that went out of fashion a while back. I’m talking about the waterdrop notch on the Vivo V20, which feels strange when its compatriots, even its own predecessor, had adopted a punch hole for the selfie camera. The notch is surrounded on all sides by sizeable bezels, especially at the bottom which does not give the phone a good screen-to-body ratio. Redemption does come in the form of the gorgeous AMOLED panel which measures 6.44-inches and offers FHD+ resolution along with a 20:9 aspect ratio. Thanks to the OLED nature of the display, contrast ratios, pronounced blacks, viewing angles and colour accuracy are all quite good. The display also gets substantially bright and dim for helping to read in varied lighting conditions. You can adjust the colour scheme from a colourful and contrasty Bright mode to a more natural tone of Standard. To pick out something to complain, one can see the lack of a high refresh rate display which is admittedly harder to pull off on an OLED panel. It will be a feature that is sorely missed by users coming from 90Hz panels, available at much lower costs than the V20, but for others, you will definitely get a stellar viewing experience. 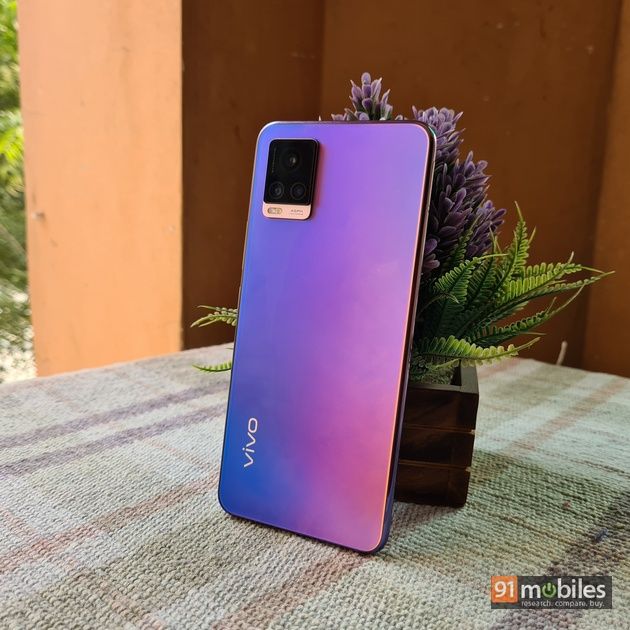 As for the triple-lens setup, the V20 is actually a slight downgrade in terms of the number of cameras from the V19 which had a quad-camera setup. The V20 gets an upgraded 64MP primary camera along with an 8MP ultra-wide sensor that doubles up as the macro sensor as well and lastly, there is the 2MP monochrome lens. On the front, you get a high-res 44MP selfie shooter. Talking about daylight shots, there is hardly anything to complain about. The primary lens makes for extremely detailed pixel-binned shots that are colour rich and slightly contrasty. Oversharpening can be a problem sometimes in slightly underexposed lighting conditions but HDR and shadows are almost always on point. The ultra-wide lens, even though having a lower resolution, churns out surprisingly detailed shots and I’m happy to say that the macro functionality is well worth using, better than other dedicated macro lenses I’ve seen. As for the mono lens, the usage seems limited but it does a decent job of clicking social media-worthy B&W photos. 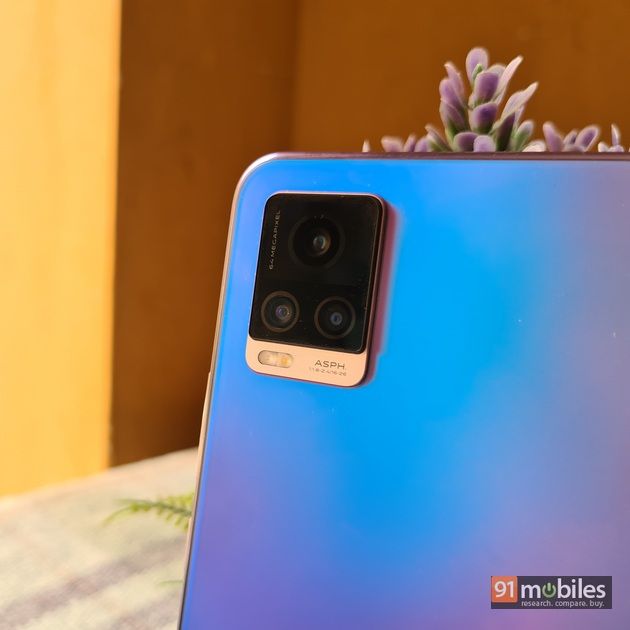 At night, the dedicated Super Night Mode can be kicked in to bring out a lot of details that might otherwise be lost. However, I did notice that where there was very little lighting, the camera had a hard time getting the shot exposed. Even so, when there are external sources of light such as a street lamp, the camera performs decently. 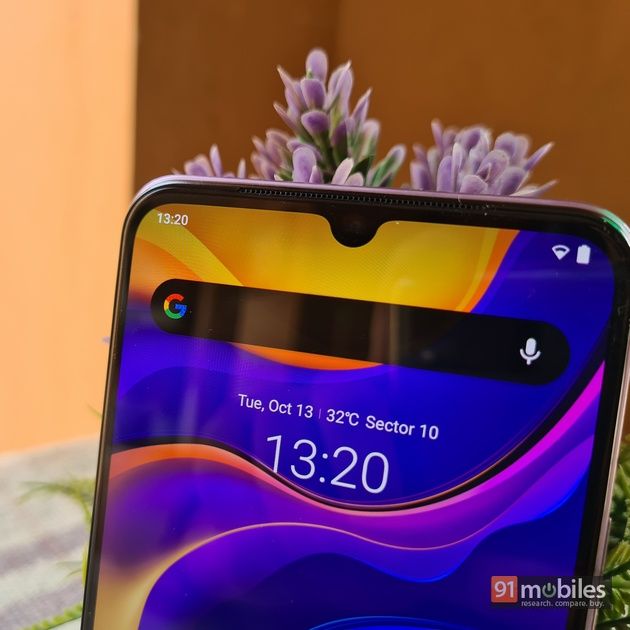 On the video part of things, Vivo has included some nifty features that might worth exploring. Art portrait mode allows you to keep yourself in coloured focus while the background is B&W. Motion autofocus will lock on your focus on a moving object while Smart Zoom will execute a series of cinematic pans on a moving object to keep them in the centre of the frame.

Finally, there is the 44MP selfie shooter which happens to be one of the highest resolution front-facing cameras in the segment. It does excellent front portraits and night shots while the usual selfies are quite good. There is, of course, the usual Vivo-branded face smoothening which tends to be unavoidable. Vivo has been talking about an industry-first feature on the front-facing camera called Eye Autofocus technology which basically tracks your eyes and adjusts the focus accordingly in your video. While on paper this sounds like a wonderful idea, the final execution seems slightly jittery. I will admit that this technology, earlier available only for DSLR cameras, is a big step above fixed-focus selfie shooters that are unable to grab details when the face moves out of the fixed plane of focus. However, while eye-tracking does let you constantly change focus as you move about while shooting a selfie video, it doesn’t do so smoothly. The focus shifts jerkily, and there is a slight lag while the selfie shooter tracks your eye movement, something which is noticeable when you view the video shot and even more so when the lighting at the back changes. I believe this is a good attempt by Vivo to bring this kind of technology to bloggers who are using selfie cameras but there is still some scope for improvements via a software update. 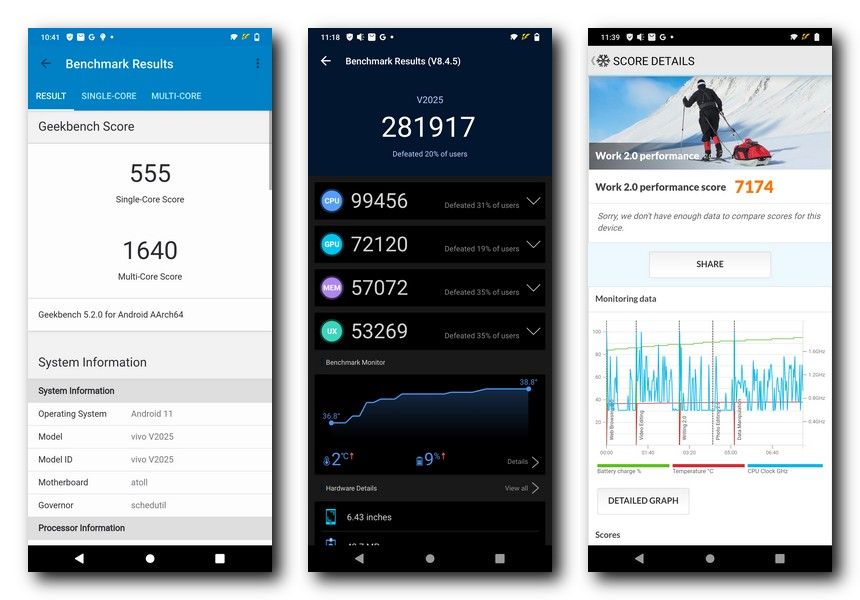 Powering the Vivo V20 is a Snapdragon 720G SoC, a step-up from the earlier Snapdragon 712 being used on the Vivo V19. Right off the bat, it is clear that the V20 is not going to be a performance powerhouse. For its price, the OnePlus Nord (review) will give you a much more powerful Snapdragon 765G chipset while the Realme X3 will go a step further and provide last year’s flagship Snapdragon 855+ SoC. What this means is that the Vivo V20 will not be very proficient at graphically intensive tasks as much as its competitors. Even so, running day-to-day tasks will not be an issue as the 720G deals with those perfectly. Apart from that, you will also be getting up to 8GB of RAM and 256GB of internal storage with an option to expand to a further 256GB using a microSD card. That should take care of your multitasking and storage needs for a long time. 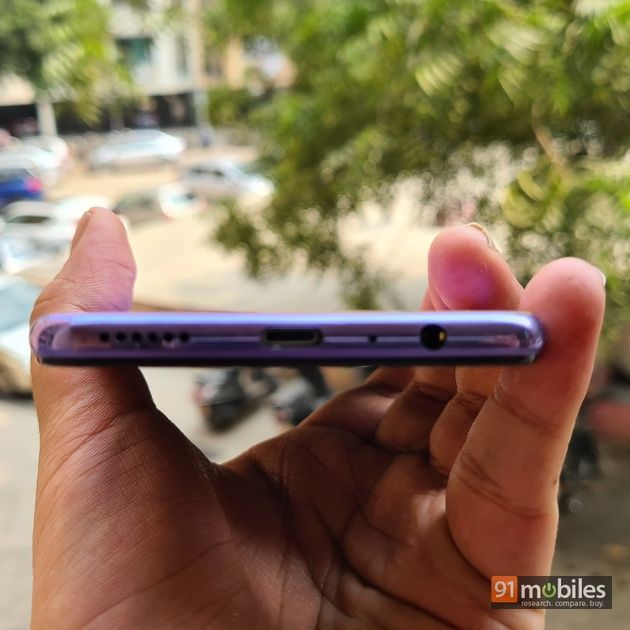 For authentication purposes, the Vivo V20 has an in-display fingerprint reader which works about as well as any other optical sensor in the mid-range segment. It’s prone to errors, not very fast at recognition, and hurts your eyes at night. The bottom-firing speaker gets exceptionally loud at times but can get crackly at a max volume which is why I am thankful for the headphone jack. Call and microphone quality are up to the mark. 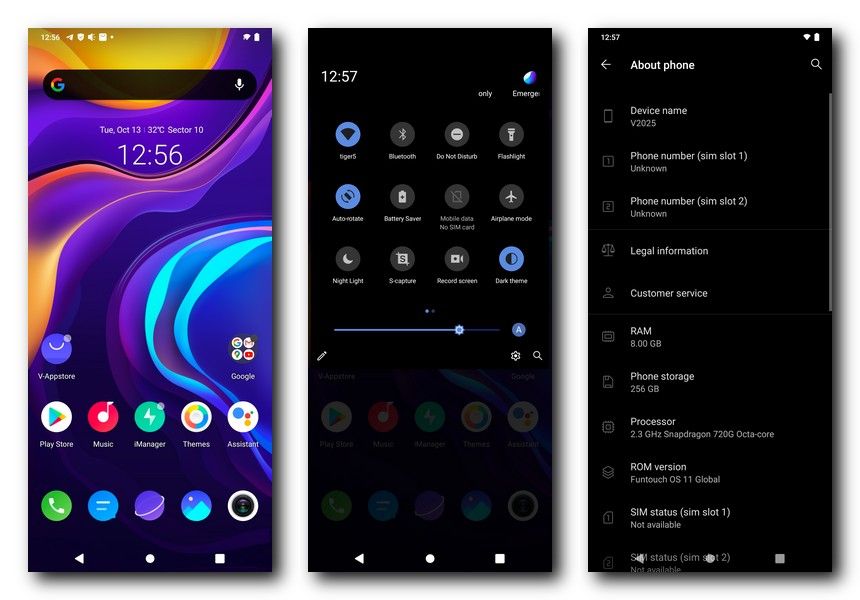 The Vivo V20 runs the latest FunTouch OS 11 which is based on Android 11, making it one of the first phones from Vivo to run Google’s latest platform straight out of the box. With the new FunTouch skin, Vivo has more or less completely shed its former bloatware-loaded, iOS clone and has instead made the interface much more akin to stock Android. This includes new navigation buttons, a simplified notifications tray, a more accessible settings menu and overall reduced bloatware. In the battery department, you will get a 4,000mAh unit that will last you the entire day but not more than that. Thankfully, the phone does come with 33W FlashCharge technology which is said to juice up your device in about 60 minutes and 50 percent is done in about 25 minutes. Sans heavy gaming, you are easily looking at about 5 hours and 30 minutes of screen-on time, which can be considered above average in this segment. 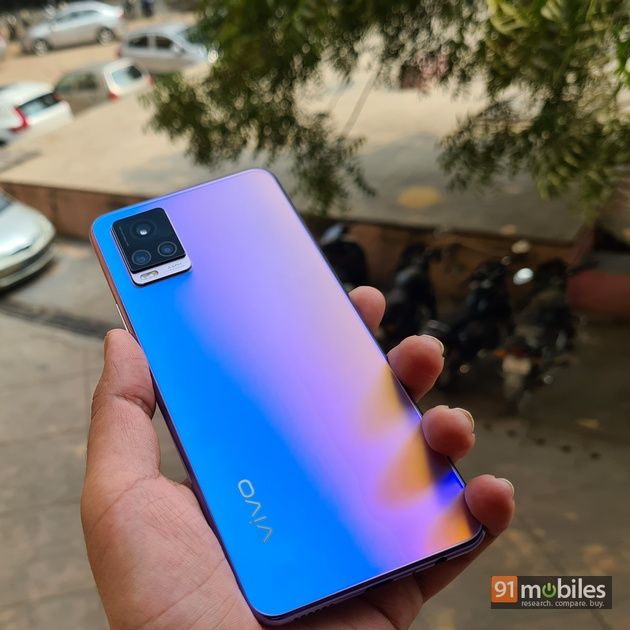 The Vivo V20 is a stunning phone and a delight to hold in the hand. Its design is nearly flawless and the colours, especially the Sunset Jazz, are mesmerising. The phone can pull off some of the most detailed selfies in the segment and its daylight photos are some of the best you can get. Running Android 11 out of the box guarantees the latest features and also a substantial amount of software updates for the future. However, the phone can take a beating in the performance sector where most of its competition is likely to leave it behind. If gaming, high performance or a faster refresh rate display are not important to you, then the Vivo V20 is just about as a good as you can get for its price. 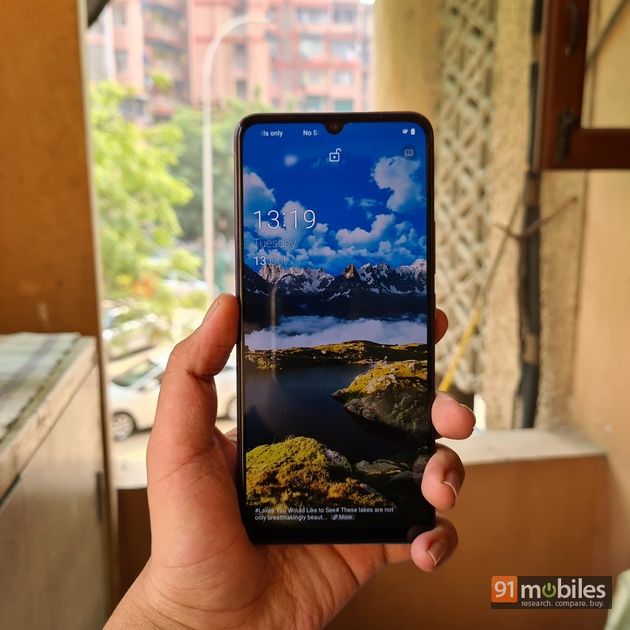