“The Vivo V9 offers a gorgeous display and impressive specs”

Smartphones with bezel-less designs are here to stay, though manufacturers still need to engineer a way to relocate the selfie camera and other sensors for a truly bezel-less appearance. So far, the closest we’ve come to a truly bezel-less smartphone has been the Apex concept phone demoed by Chinese tech giant Vivo at its MWC press conference this year. However, it still might be a while until the Apex concept phone sees light of day. A more mainstream approach we’ve seen in this department is by the Cupertino giant Apple and its iPhone X (review). The company has managed to make all but the top of the smartphone bezel-less and has housed all the necessary sensors and components inside a notch at the very top.

Nowadays, more and more Android manufacturers are following Apple’s footsteps and the most recent smartphone to ship with a notch is the Vivo V9. In fact, the Vivo V9 is the first notch-toting Android phone to land in India. So, is the device yet another affordable iPhone X clone or is there more to it than meets the eye? Let’s find out in this review of the Vivo V9. 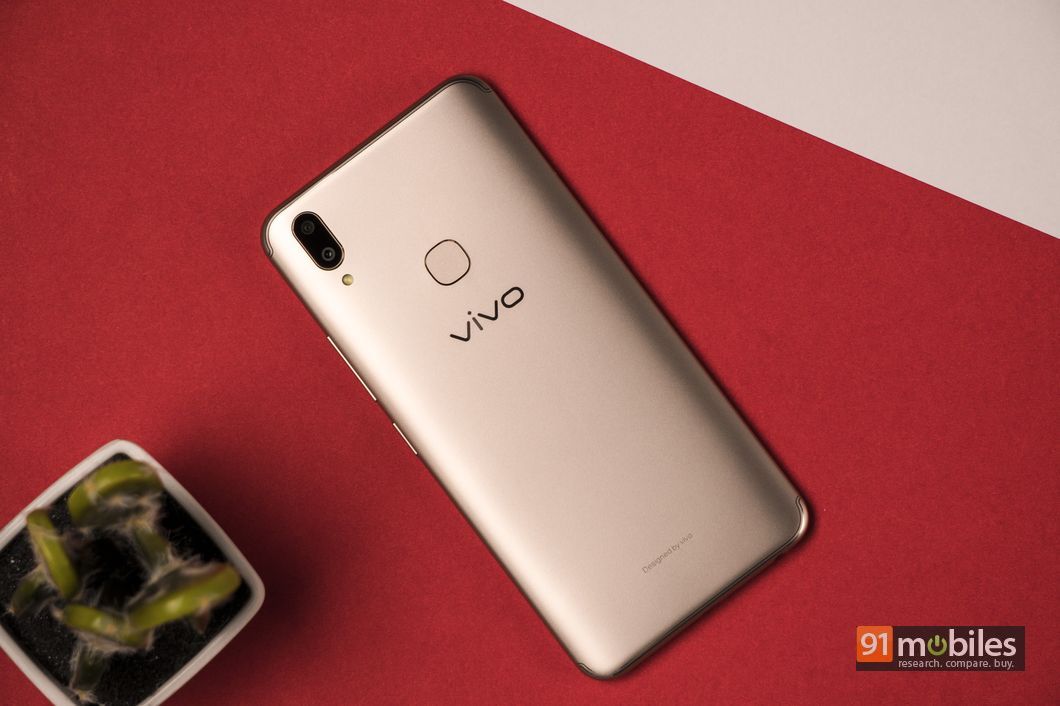 There’s no denying the fact that the V9’s design is heavily influenced by the iPhone X. However, once you look past that, you’ll have what is essentially a well built and a rather good-looking smartphone. As far as the materials used in the construction are concerned, the V9 is fashioned out of plastic, and the back of the device features a glossy finish, which is a treat to look at. The experience doesn’t last all that long though since the back of the smartphone is a fingerprint magnet and smudges really easily. I’d also like to mention that the device is a tad bit slippery, but thanks to Vivo’s excellent weight distribution, the V9 doesn’t feel unwieldy in the hand. On the contrary, the smartphone offers excellent ergonomics and one-handed usability which is a rarity, considering the smartphone’s rather large display. 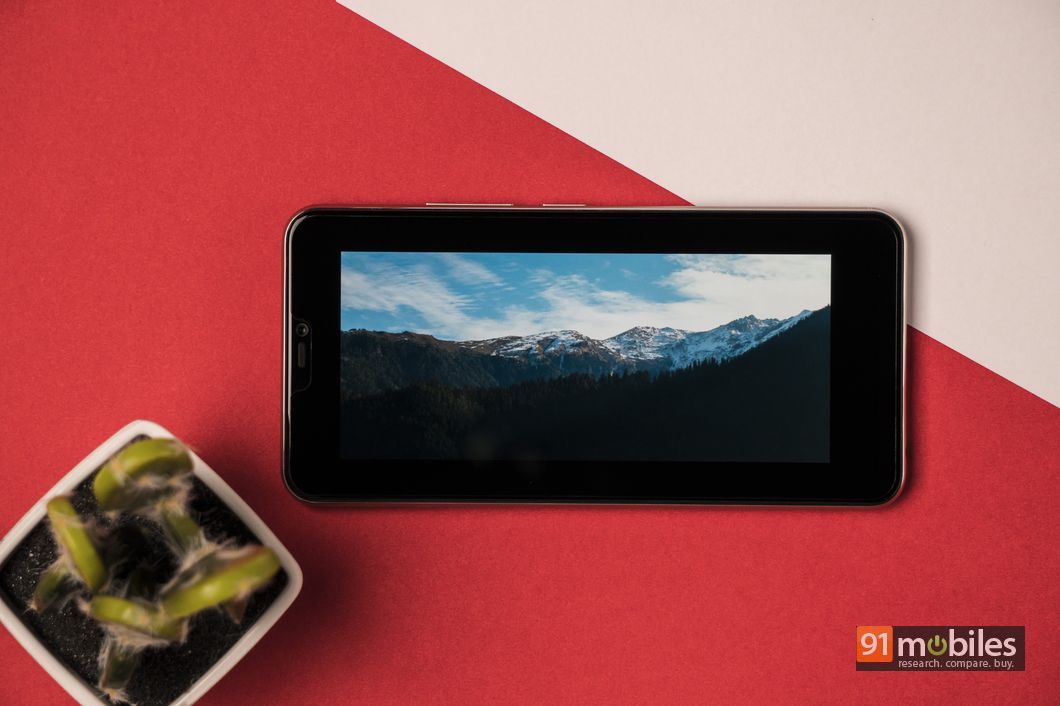 Speaking of which, the Vivo V9 ships with a 6.3-inch FHD+ IPS display which simply put, feels other-worldly. The combination of a nearly bezel-less panel, solid viewing angles, and accurate colours make the display of the V9 arguably its best feature and over the course of my review, I found myself using the smartphone more over my laptop to watch movies and stream videos. The display boasts adequate peak and minimum brightness levels too and even ships with a built-in blue light filter software to reduce the strain on your eyes, which is bound to happen since you’ll spend the better part of your day staring at the smartphone’s gorgeous display. 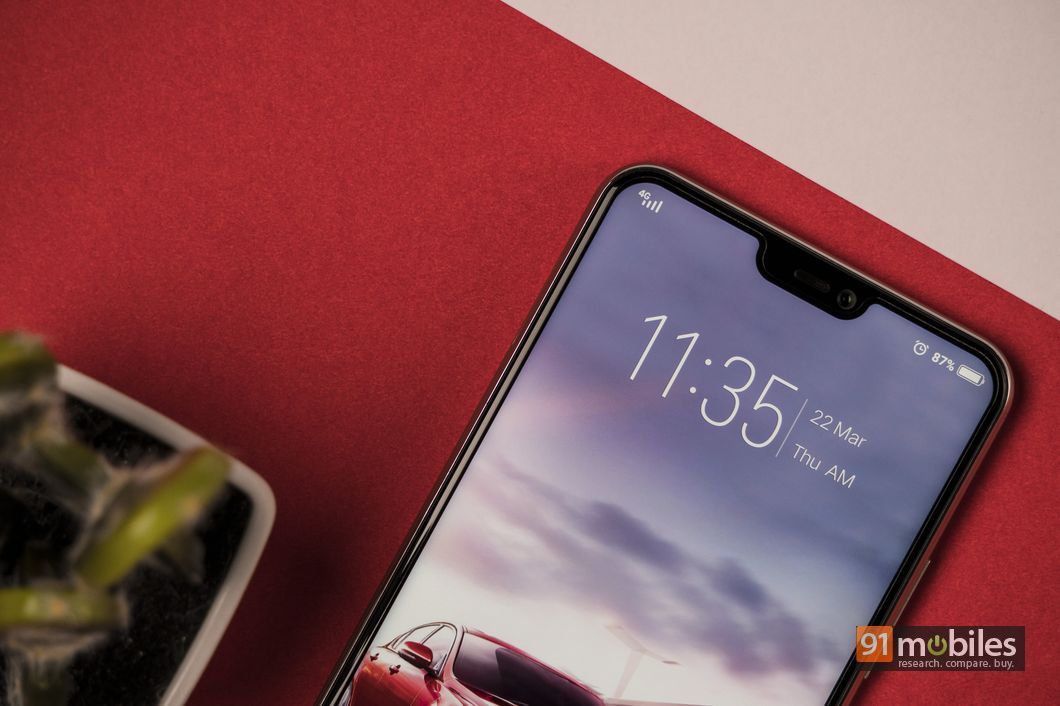 Oh, and the notch? Well, I barely noticed it after setting up the smartphone and playing with it for a few hours. To me, the added screen real-estate and a superior screen-to-body ratio offer a lot more value. Moreover, even though most applications don’t leverage the smartphone’s full display right now, the scenery will change in the future since the next iteration of Android dubbed Android P allows developers to program apps specifically for notch-based smartphones. As it stands, the unique 19:9 aspect ratio of the display makes it so that the majority of the content when viewed on the screen gets cropped. Therefore, you’ll be gaming and watching videos on a significantly smaller screen which is a bummer, though that’s a compromise you’ll have to make with almost every notch-based Android smartphone in the market. 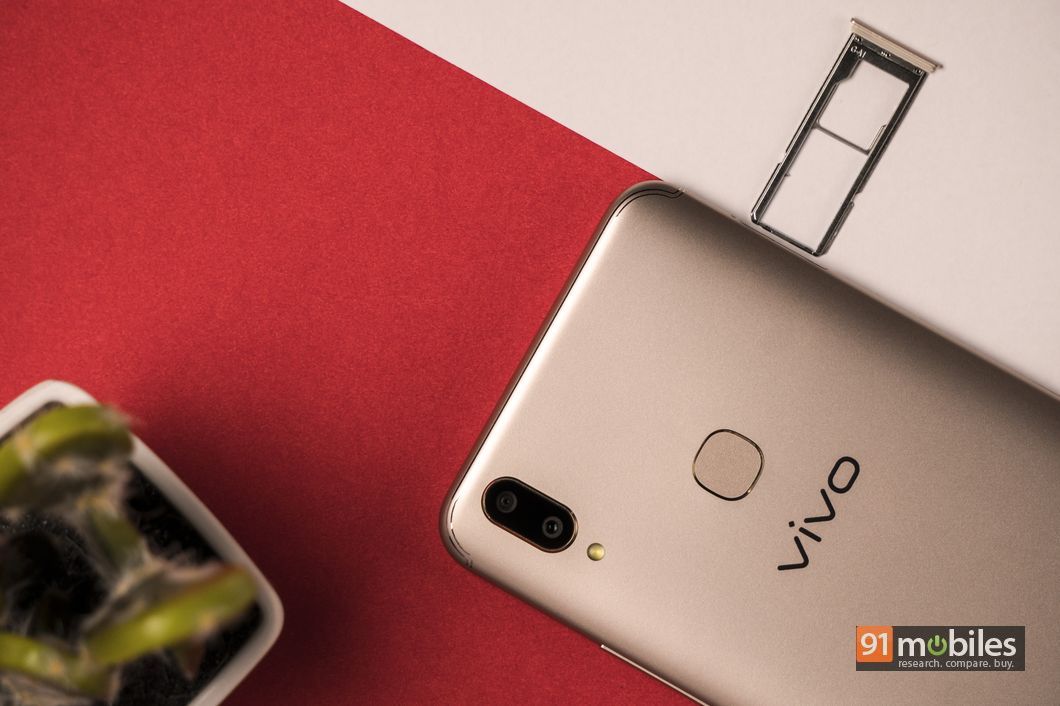 One key difference between the design of the Vivo V9 and the iPhone X is that the former ships with a fingerprint sensor for biometric authentication whereas the latter does not. In traditional Vivo fashion, the fingerprint sensor on the V9 is extremely accurate and it unlocks the smartphone in the blink of an eye. Moreover, the smartphone also comes with face unlock too, which works well in a well-lit room, albeit is a bit iffy when there’s not sufficient light around. 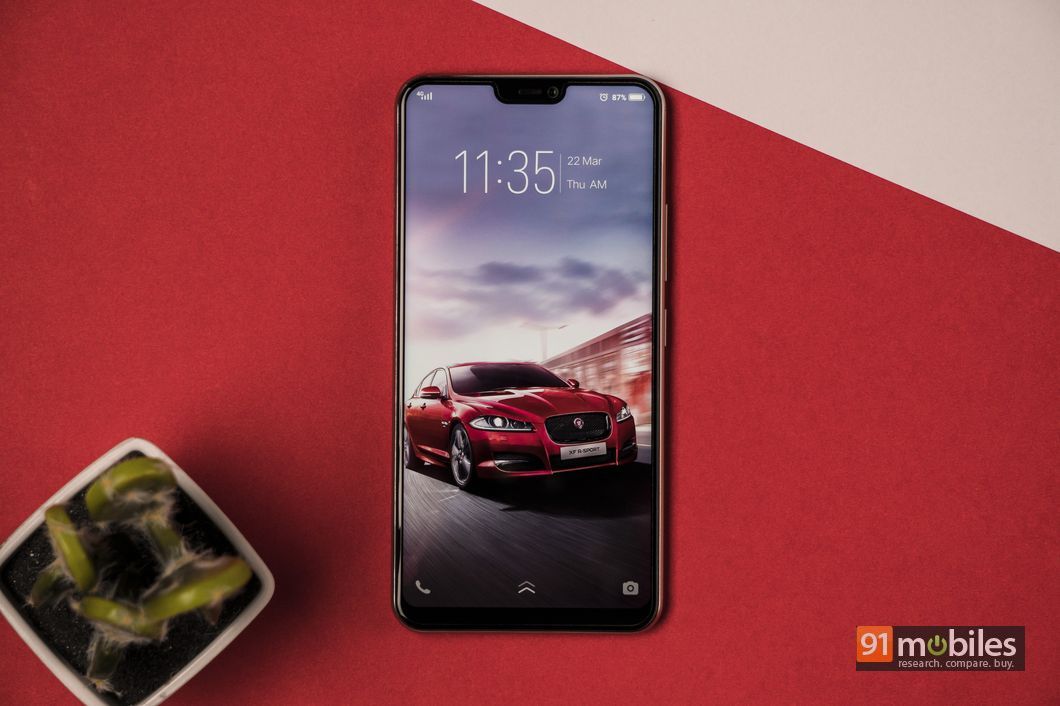 All in all, Vivo has managed to knock the ball out of the park with the design and the display of the V9. Despite using plastic, the smartphone easily matches up to some other high-end offerings in terms of the in-hand feel and the display is just really pretty to look at. The only flaw I can think of is that the display doesn’t merge seamlessly with the back of the smartphone and instead, rests on top of a plastic trim. However, I didn’t give much thought to it after using the smartphone for a day or two. 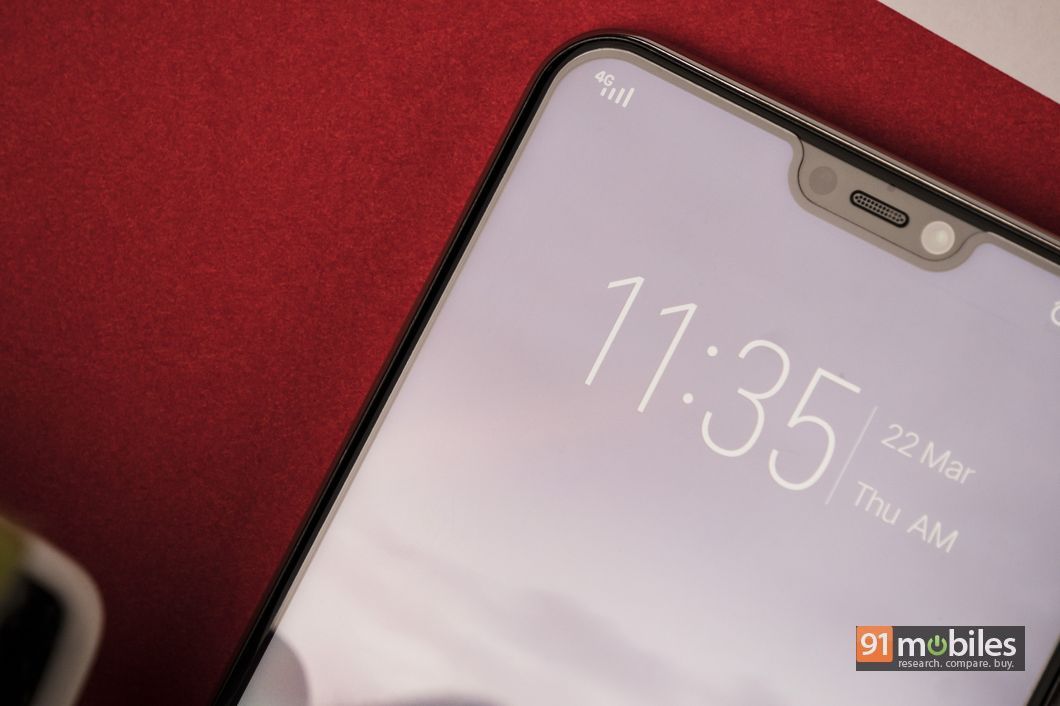 Let’s get the obvious out of the way first – the 24MP selfie camera on the Vivo V9 is incredible. If you like to look at all the blemishes on your face at a microscopic level, then the V9 is the phone for you. In all seriousness, the smartphone captures some of the most detailed selfies I’ve ever seen, which coupled with its built-in beauty mode ensures that you never have to go to a salon for a makeover ever again. While the smartphone doesn’t feature an LED flash module upfront, you do get the option of turning on the screen flash which lights up the smartphone’s 6.3-inch display to give you some good-looking night-time selfies. You also get the option of clicking selfies in Bokeh mode, which was absent on the V7+ I reviewed a while back. As far as the quality of the portraits is concerned, the smartphone manages to separate the subject from the background really well, but the edges turned out a tad bit soft. 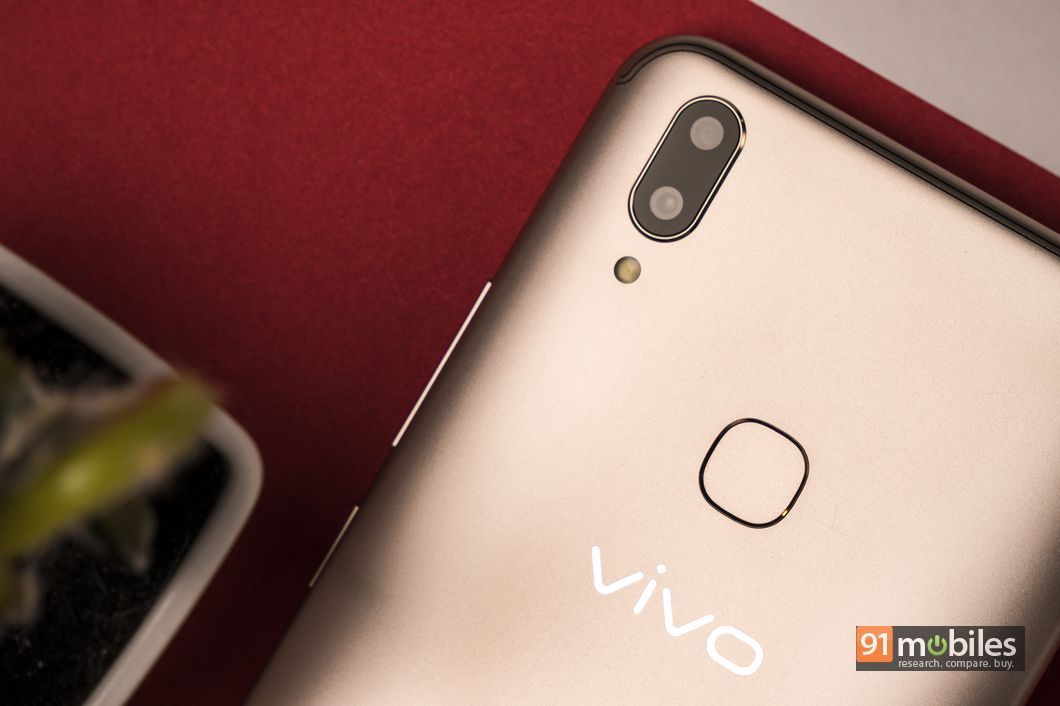 As far as the specs of the rear camera are concerned, the Vivo V9 ships with a pair of 16MP and 5MP sensors at the back with f/2.0 and f/2.4 aperture respectively. In terms of quality, I must say, the V9 might be one of the best affordable smartphones I’ve used for casual photography. If you don’t like to play with complicated camera settings just want a smartphone which clicks nice photos, then the Vivo V9 is a solid option which doesn’t break the bank. Over the course of my review period, I clicked a bunch of photos with the smartphone and was amazed by the handset’s built-in HDR mode.

As can be seen from the sample images, the details in photos with the HDR setting turned on are significantly better, the colours look more natural and the shadows and the highlights in a scene pop out as well. Moreover, the V9’s rear camera managed to retain a lot of details even when I clicked pictures in lowlight. You also get the option of clicking pictures in bokeh mode owing to the presence of two sensors at the back. Much like the selfie-bokeh shots I took with the smartphone, the rear bokeh shots also turn out well, albeit have soft edges. Last but not the least, the smartphone also ships with an ‘AR stickers’ mode which overlays funky stickers on the subject.

The good news? The Vivo V9 ships with Android Oreo v8.1 out of the box. The bad news? The heavy custom skin on top of Android Oreo is a far cry from stock Android. Now, depending on how you like your dessert served, you might fancy the makeover Vivo has given to Android Oreo. Unfortunately, I am not a big fan of the skin and during my review, I noticed that the UI transitions got significantly better once I switched to Nova launcher. In terms of features, the smartphone has an edge over the competition’s Android Nougat offerings since the V9 supports functions like Picture-in-Picture mode which are specific to Android Oreo. Other than that, most of the software features are same across previous Vivo smartphones, including support for theming, smart split and a game mode which enhances a user’s gaming experience by giving them the option to automatically block/take calls and messages while gaming.

Spec-heads will be delighted to hear that the V9 is powered by a Snapdragon 626 processor which works alongside 4GB of RAM. For the uninitiated, the SD626 chip comes as the successor to the Snapdragon 625 processor and offers a 10 percent bump in performance. Moreover, similar to its predecessor, the SD626 processor strikes a good balance between performance and battery life too, which I’ll talk more about in a later part of this review. In terms of daily usage, the Vivo V9 managed to surpass my expectations and didn’t stumble even when I was juggling between a plethora of applications. That said, I did notice a bit of lag when I was browsing through the feed on some demanding applications like Facebook and Snapchat. 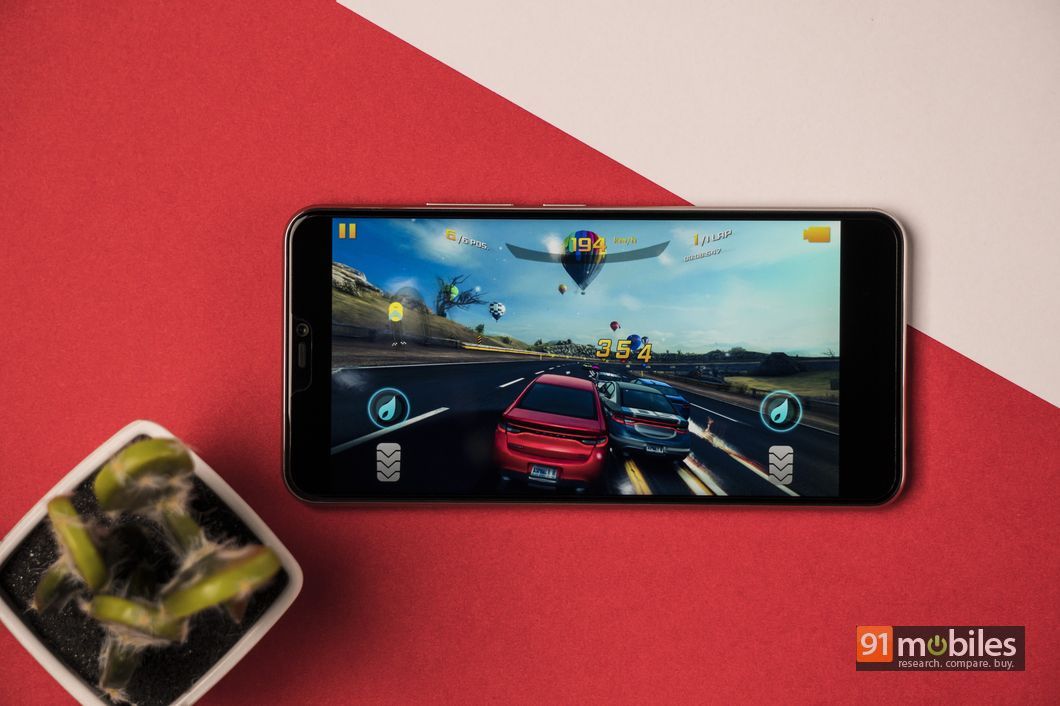 On the flip side, cranking up the graphics settings to max on games like Unkilled and Respawnables didn’t result in any frame drops and the smartphone managed to keep the temperature under control too. Moreover, thanks to the smartphone’s 64GB of built-in, user-expandable memory, you can download all the apps you’d like and not risk running out of storage anytime soon. Unfortunately, the positioning of the speaker is a bit of a letdown and makes it almost impossible to enjoy in-game audio.

In the battery department, the Vivo V9 ships with a non-removable 3,260mAh cell which thanks to the smartphone’s battery-efficient processor, easily saw me through the end of a day. The only downside is that the smartphone doesn’t feature quick charging and therefore, you’ll have to plug the device overnight to ensure you wake up to 100 percent charge levels in the morning.

Priced at Rs 22,990, the Vivo V9 is a solid smartphone which brings a lot of interesting features to the table, including a gorgeous display, impressive battery life, good performance and capable cameras on both, the front as well as the back. However, the smartphone market, especially the affordable segment at that has become extremely competitive over the years and for almost Rs 5K less, you can get your hands on the Xiaomi Redmi Note 5 Pro (review) which offers significantly better performance, a better build owing to its unibody metal design, a beefier battery and a comparable if not better rear camera. 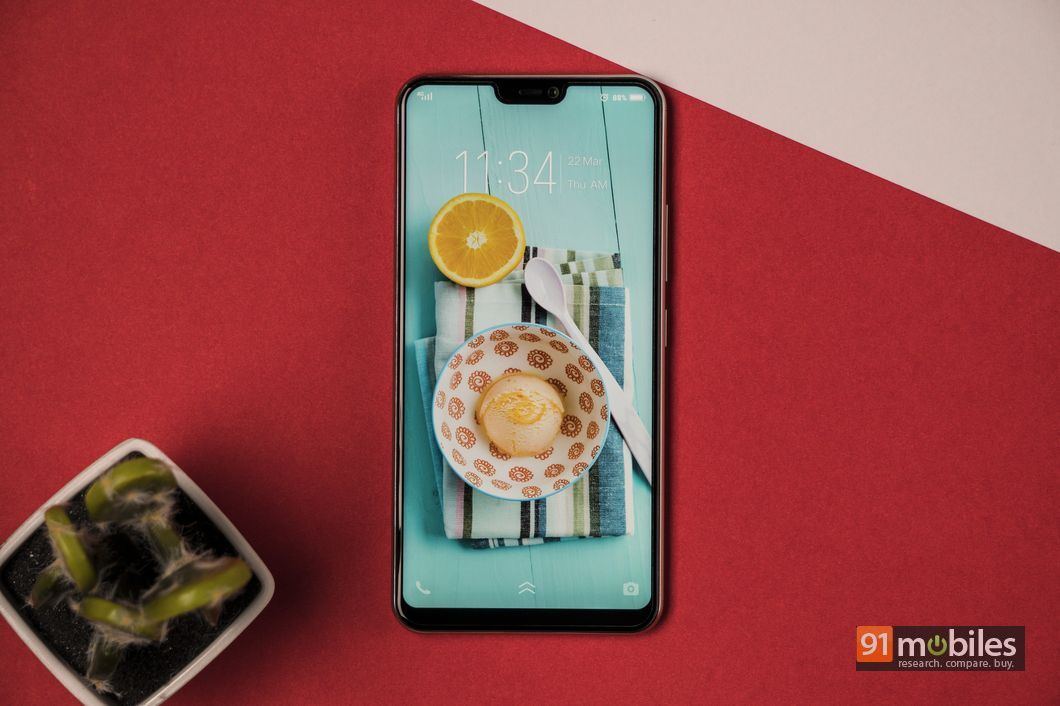 With that said, the fact that the Vivo V9 ships with Android Oreo out of the box is a huge plus and I’m certain that the smartphone’s front camera is also slightly better than what you get with the Redmi Note 5 Pro. Moreover, it’s a lot easier to get your hands on the V9 over the Redmi Note 5 Pro, which is almost always out of stock. Had Vivo priced its offering more competitively, I would’ve given my recommendation to the V9. However, as it stands, I feel that the Redmi Note 5 Pro offers a much better value for your money.