As the adage goes, it only takes a spark to light a fire… and soon after LG came up with the near-bezeless G6 (review), other manufacturers followed suit, bringing the 18:9 screen aspect ratio to the mainstream. Be it the upcoming Apple iPhone X or the recently unveiled Xiaomi Mi Mix 2 (review), going bezel-free has become the new norm and it was only a matter of time before manufacturers figured out a way to bring this feature to the affordable segment. We’ve already seen some affordable smartphones such as the LG Q6 (review) and the Micromax Canvas Infinity (review) parading this feature. The latest addition comes from Chinese tech giant Vivo in the form of the V7+ (first impressions). As is the case with most smartphones from the company, the V7+ is a selfie-centric smartphone, but can a nearly bezel-less design and a good front camera help it keep up with the competition? Stay with me to find out.

Specs at a Glance 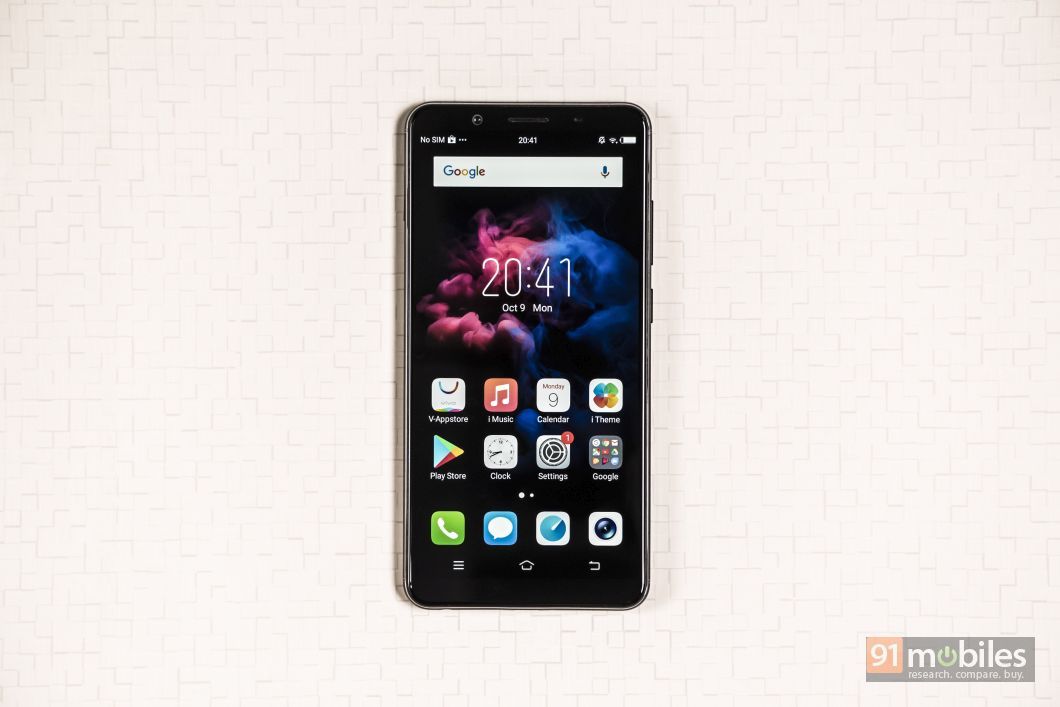 Why has the bezel-free trend caught on like wildfire? Well, simply put, a bigger screen equates to a more immersive media consumption experience. However, in the race for bigger screens, the overall bulk of a smartphone is increased as well and therefore, manufacturers decided to cut down the bezels to make the handsets more manageable. Now, having used the Vivo V7+ for almost a week, I can tell you first hand (pun intended), that the device is not meant for one-handed usage, despite its high screen-to-body ratio. While Vivo did manage to fit a 6-inch panel inside the shell of a 5.5-incher, the smartphone feels awkward when you hold it with one hand and tends to slip as well. That said, the overall design of the smartphone is prepossessing and from a distance, you can easily mistake the V7+ for a premium smartphone offering. In fact, based on the design shots, I am willing to bet that you thought that the V7+ was constructed out of metal. However, the smartphone employs plastic in its construction which is a slight let-down considering the asking price of the device. I would like to reiterate that the phone doesn’t look bad per se, however, a little metal in the smartphone’s construction would’ve seen it age better.

On the bright side, if your current mobile phone is weighing you down, then you should definitely consider upgrading to the V7+. Thanks to its plastic shell and a slim waistline of 7.7mm, the V7+ is feather-light. Matter of fact, I forgot that the smartphone was in my pocket more than once and had mild panic attacks. You’ll also get plenty of curves at the back of the smartphone which enhances the in-hand grip and adds a bit of flair to the smartphone’s design. My only gripe here is that the 2.5D curved glass up top doesn’t merge seamlessly into the curved back and instead, rests on an extended plastic rim. While it doesn’t make much of a difference when you look at the smartphone from the front, it feels as if the display popped out after a fall when you glance at it from the sides.

Much like most other smartphones by the company, the fingerprint sensor on the V7+ is top notch too. Not only is it blazingly fast and extremely accurate, but it has been positioned in such a way that my index finger aligned with the sensor as soon as I picked the phone up. Take notes, Samsung. 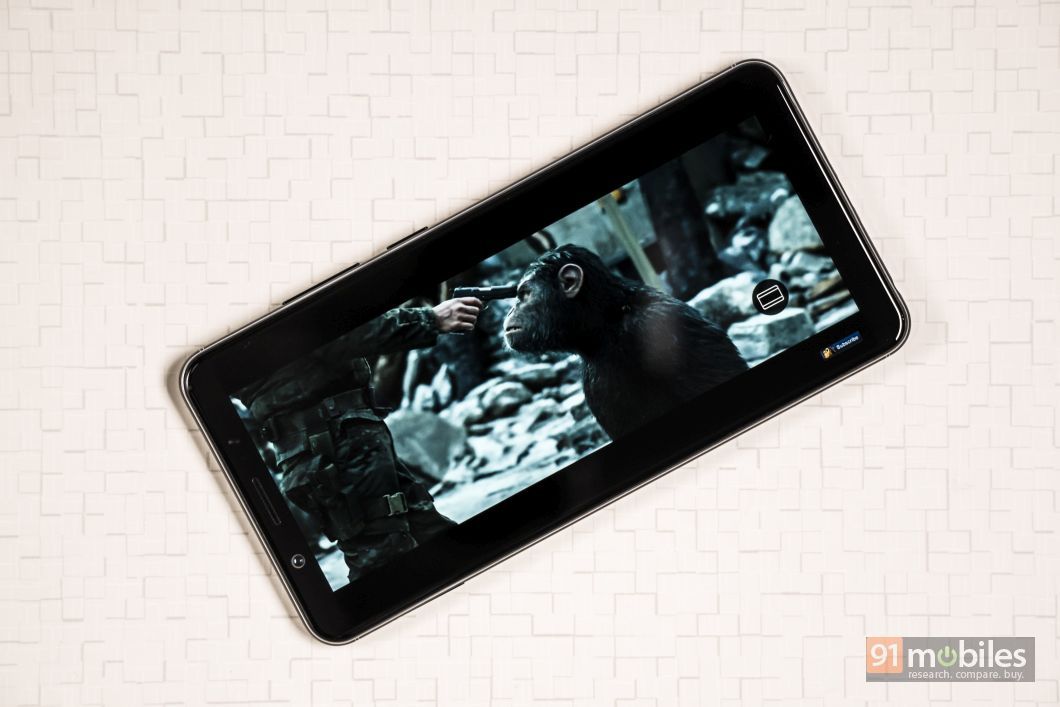 Let’s talk about one of the smartphone’s USPs, which is its 5.99-inch, 18:9 aspect ratio, HD+ display. Now, when you’re shelling out upwards of Rs 20K on a smartphone, you expect to be greeted by a full HD screen. The display has decent viewing angles and good colour reproduction but it’s not as crisp as say, a full HD+ display toting LG Q6, which by the way, also employs the 18:9 aspect ratio. Naturally, media consumption takes a hit and the V7+ doesn’t offer the ‘groundbreaking visual experience’ which the company claims it would. That said, the smartphone gets sufficiently bright outdoors and I have no complaints with the handset’s sunlight legibility. 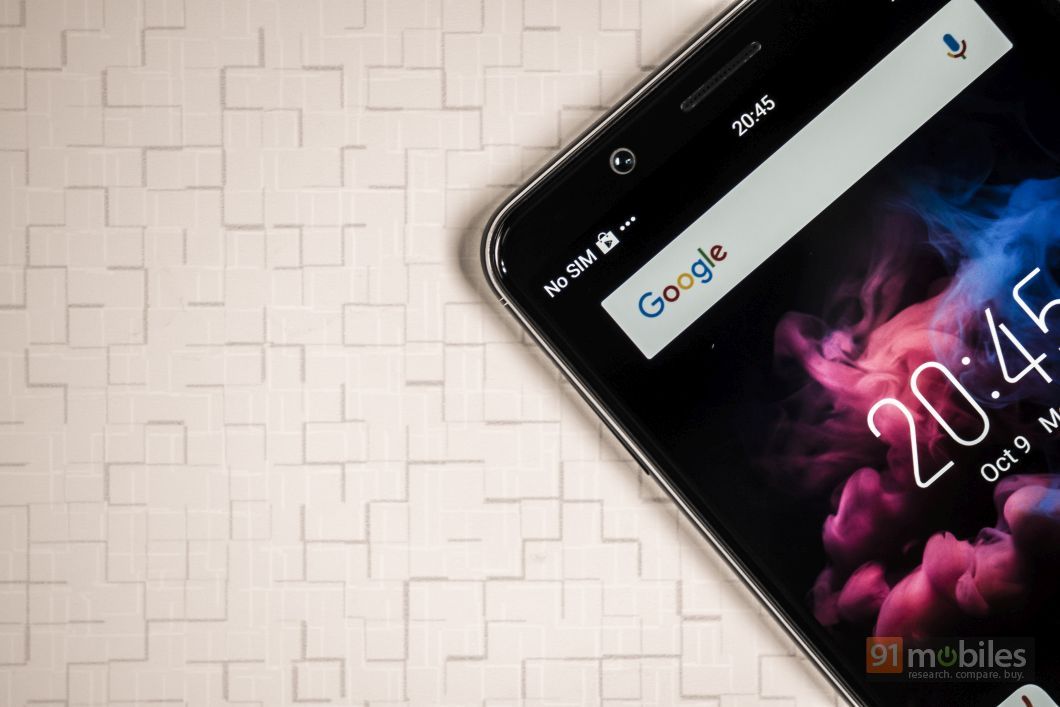 Over the years, one of the most prominent trends in the smartphone industry has been the rise of the selfie camera and brands like OPPO and Vivo have been at the forefront of the selfie revolution. Both aforementioned brands have created a niche category of selfie-centric smartphones and are amongst the best when it comes to portrait photography. So much so, when I was first greeted with the Vivo V7+, I jumped into the camera application and clicked a few selfies, without even knowing or caring about the specifications of the camera. I just knew that the selfies would turn out great and to the company’s credit, they did. But don’t just take my word for it. The camera department of the V7+ comprises a pair of 24MP and 16MP sensors on the front and the back respectively, with each camera aided by a dedicated LED flash module to assist with lowlight photography. Both the camera modules feature f2.0 aperture sensors and the front-facing shooter can even shoot live selfies, the likes of which you might have seen on Apple’s iPhones. Now, if the spec sheet doesn’t have you convinced, I do have some sample shots attached below as well but before we dissect the smartphone’s camera performance, let me give you a tour of the built-in camera application. 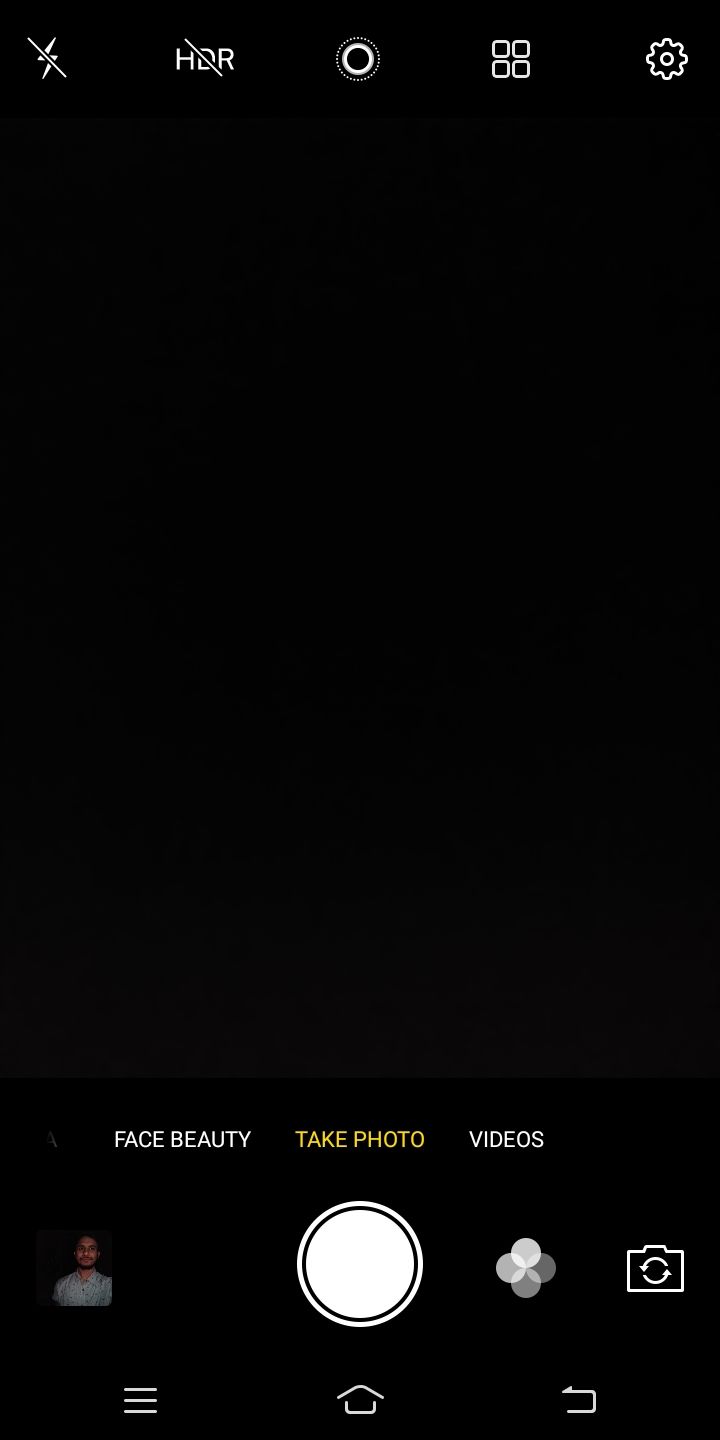 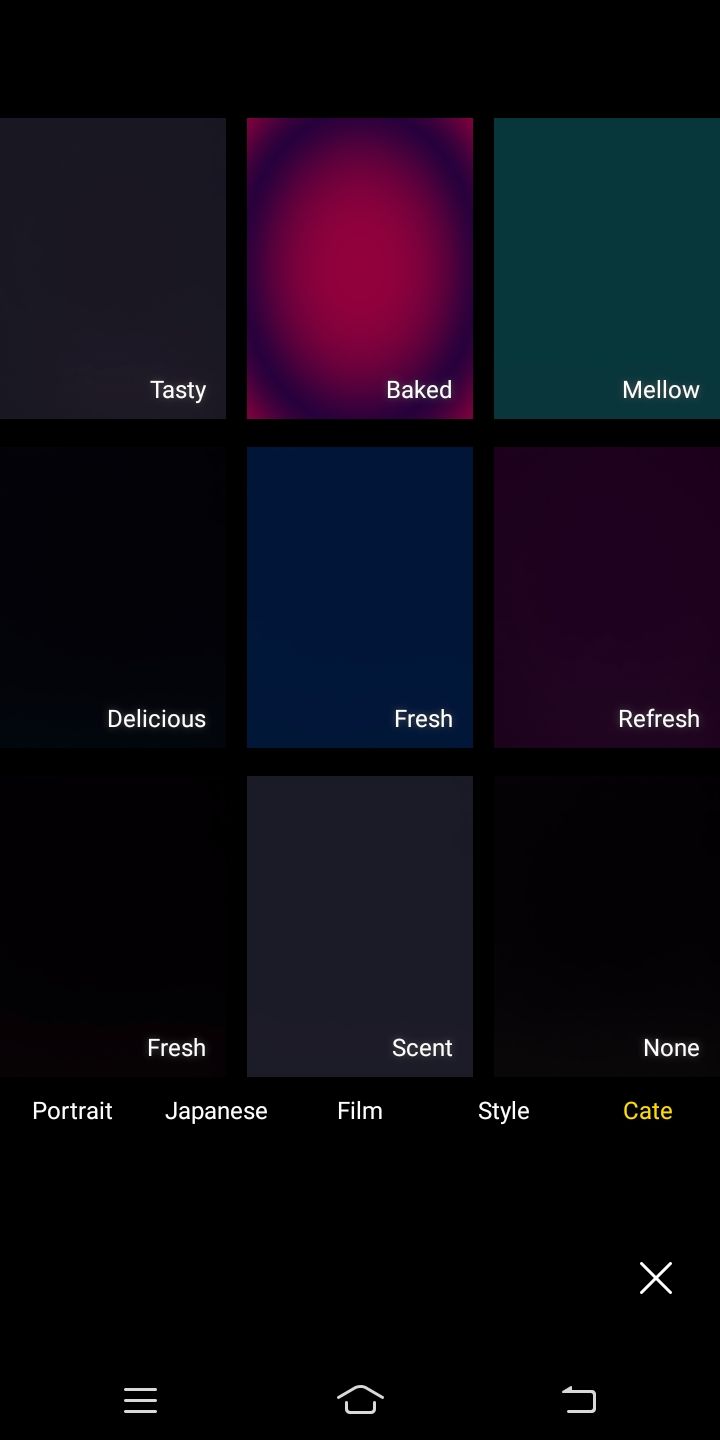 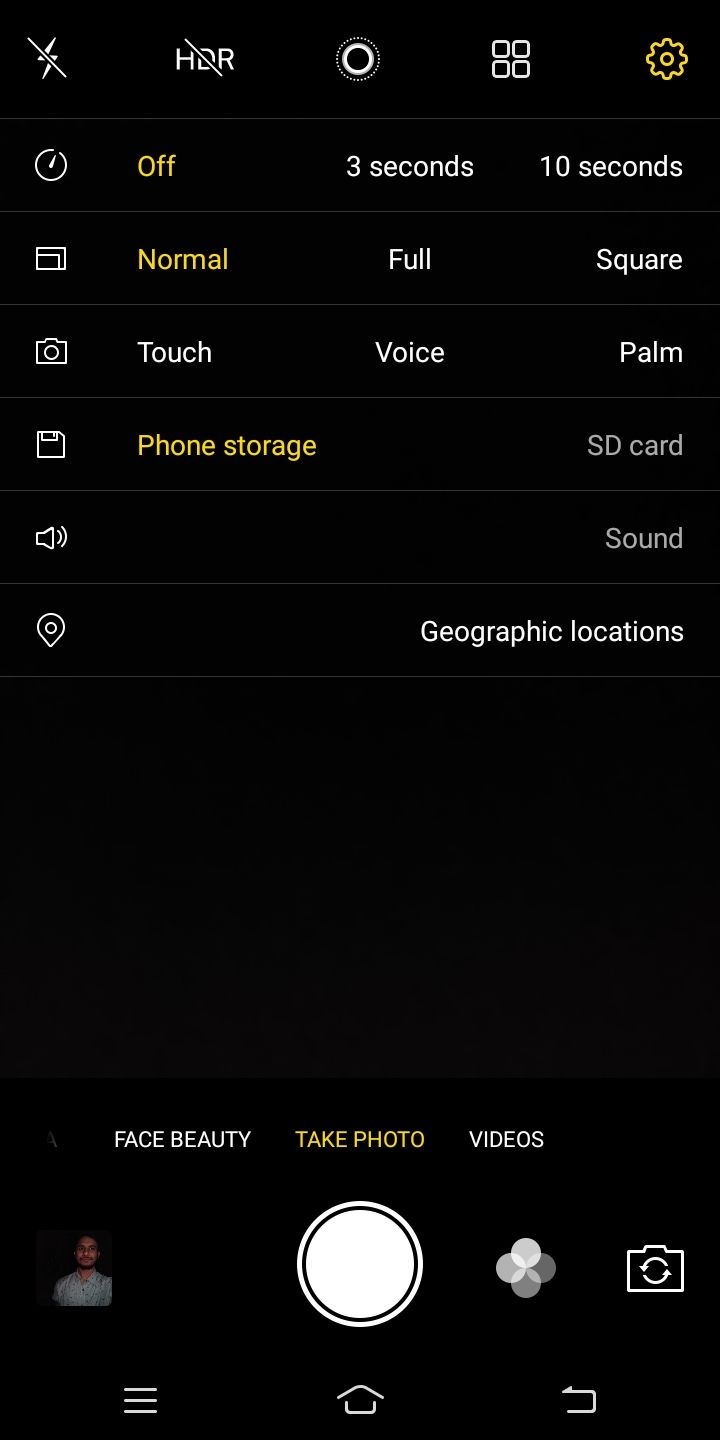 The camera application of the V7+ has a fairly minimal design albeit is loaded with features. When you first open the camera app, you’ll be greeted by the viewfinder which is flanked by a bunch of camera toggles, allowing you to turn the flash on or off, switch between normal or HDR modes, enable the live photos feature as well as tweak with some more settings. Towards the bottom, you’ll find the shutter button sandwiched between a shortcut for the gallery app and a toggle to switch the cameras. You can also switch between different modes such as beautify and video by swiping left or right on the viewfinder. Now that we’ve got that out of the way, let’s take a closer look at the smartphone’s camera performance. 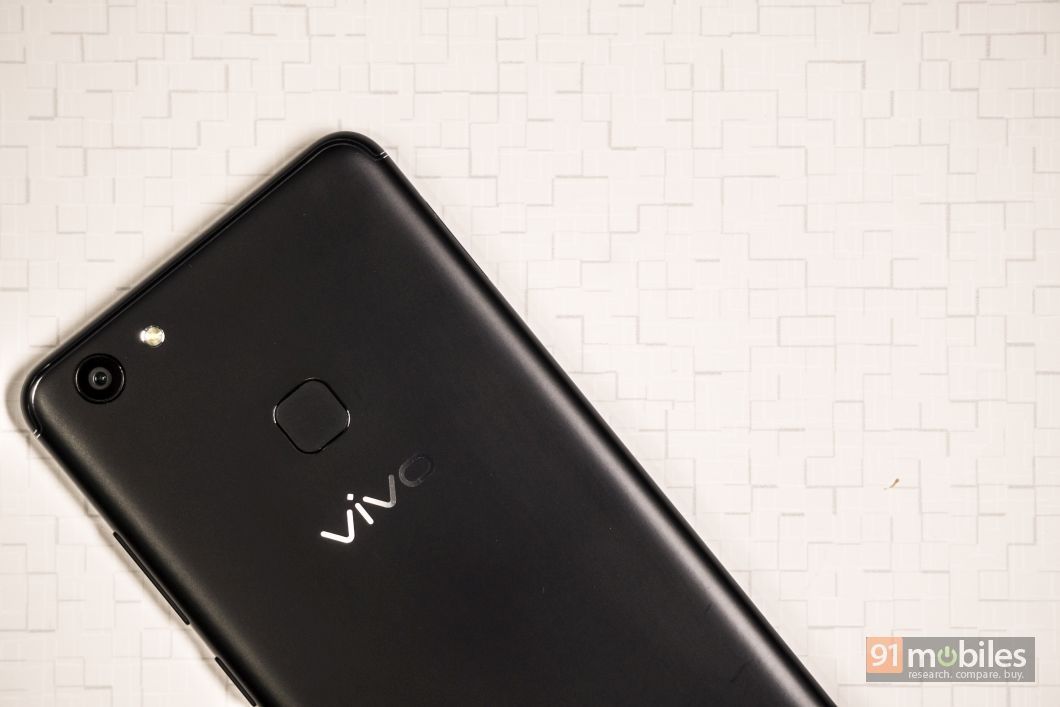 The rear camera of the smartphone clicks some great pictures in broad daylight which are rich in colour. The camera manages to capture a good amount of details too and blurs the backgrounds of the macros relatively well. There’s sufficient dynamic range as well and you can give it a further boost by turning on the built-in HDR mode. The mode doesn’t make the scene look unnatural and only slightly tweaks the image, which is nice. Lowlight photography on the V7 Plus isn’t the best I’ve seen in this range, but it’s not the worst either. The camera manages to capture a decent amount of details at night, however, the abundance of grain might make you hit delete more than share on most occasions.

The front camera, on the other hand, is downright excellent when shooting with ample lighting conditions; maybe a little too good for selfies as you’ll be easily able to make out all the blemishes on your face. The low-light performance doesn’t take a major hit either as the camera comes with a selfie flash, brightening up the dimmest corners of a street and clicking a selfie which is passable by social media standards. Lastly, there’s a group selfie feature too however, since the smartphone doesn’t ship with a secondary shooter up front, you’ll have to trace the entire canvas like you would whilst clicking a panorama. All in all, the Vivo V7+ is definitely the one to buy if you are a selfie fanatic or just enthusiastic about photography in general.

Buyers familiar with Chinese OEMs know what to expect here – a heavily themed skin running on Android Nougat which lacks an app drawer and lays all of your apps on the homescreen. Now, since it’s powered by a Snapdragon 450 chip, I would have preferred the smartphone to run stock Android as it would have given the performance a slight boost. However, to Vivo’s credit, the smartphone flew through the custom skin without any hiccups. 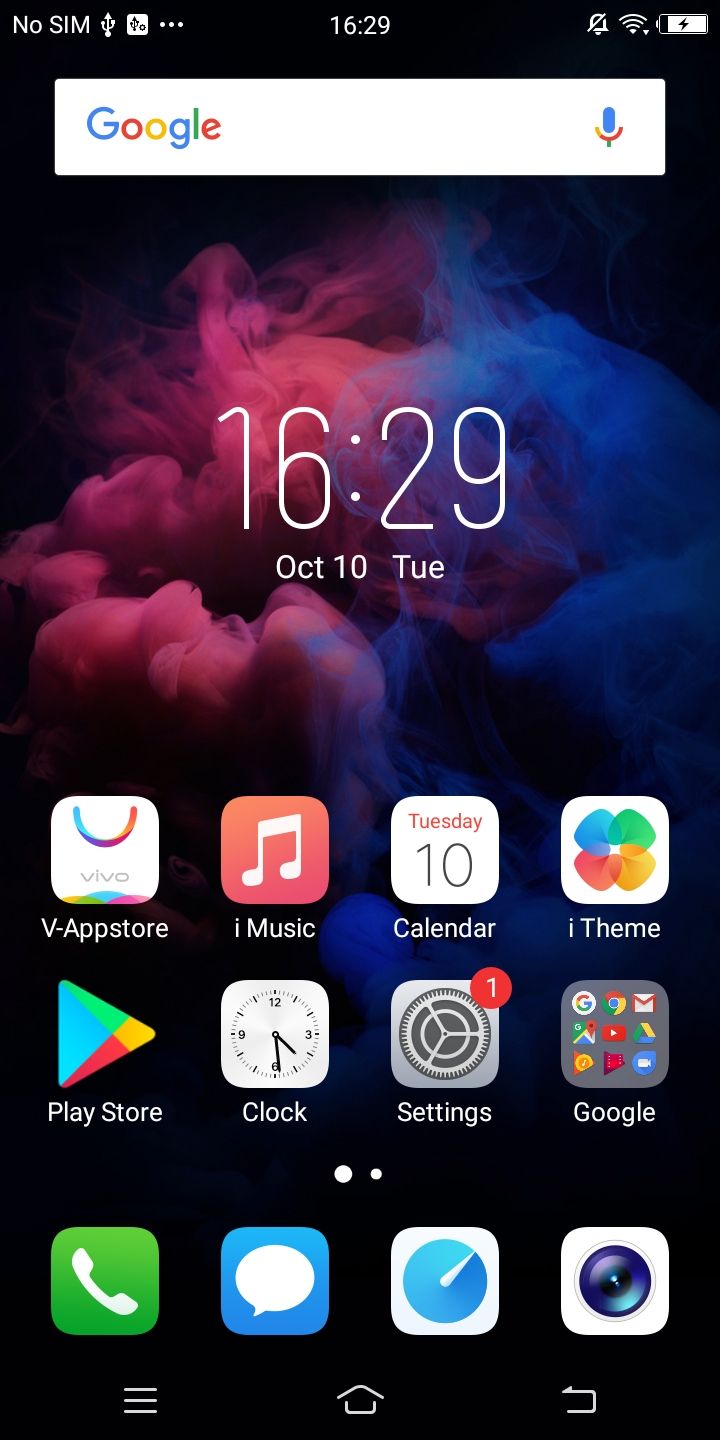 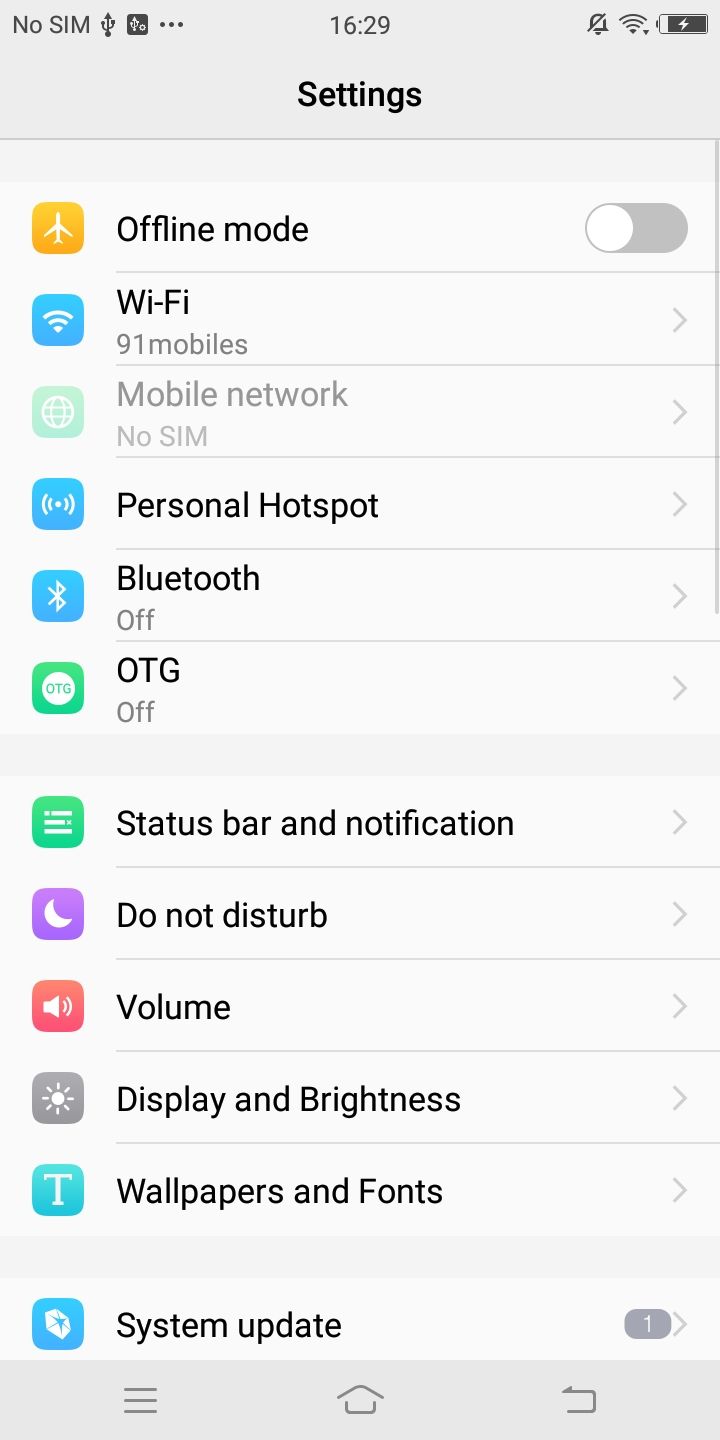 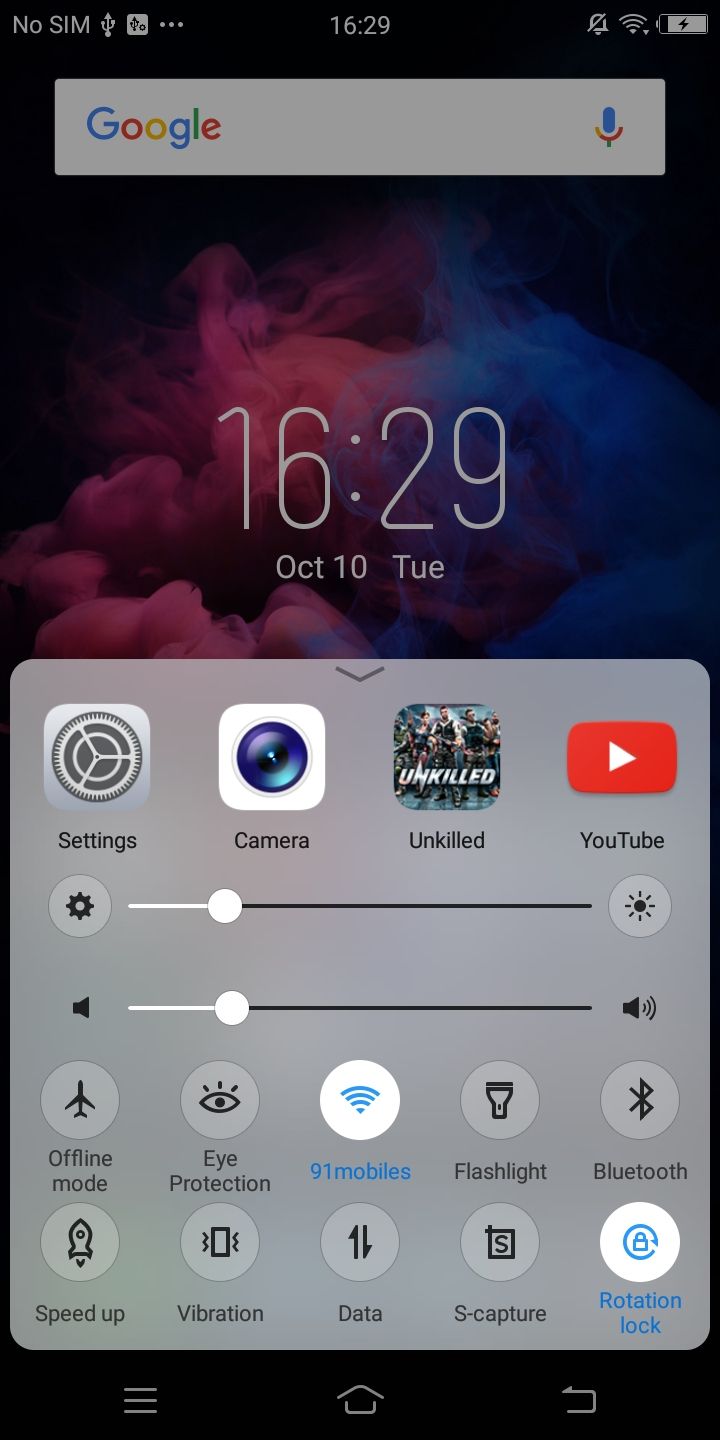 The animations rendered smoothly and the company has done a good job at aping some of iOS’s best features. For instance, swiping up from the bottom brings up the notification centre which gives you quick access to features like the Wi-Fi, recently opened apps and flashlight. Moreover, since the smartphone isn’t one-hand friendly, you won’t have to reach the top of the display to say, turn on mobile data. All in all, the software onboard the Vivo V7+ is functional, if unoriginal. 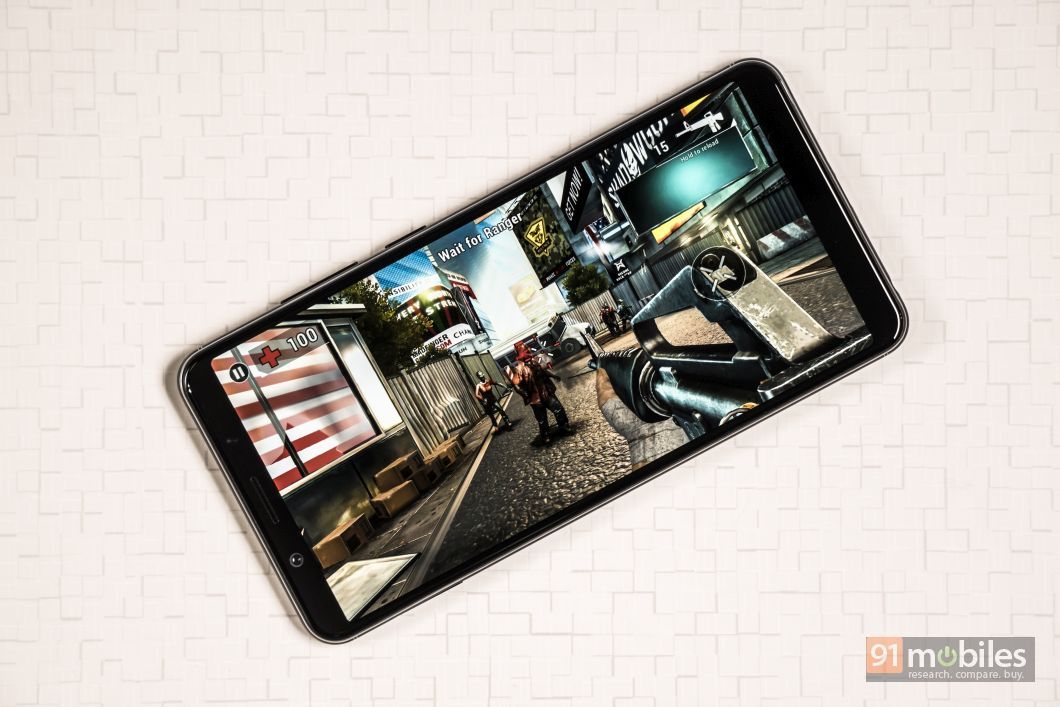 Driving the cores underneath the V7 Plus’s plastic chassis is a Snapdragon 450 octa-core processor which works with 4GB of RAM and 64GB of expandable storage. Like most of you reading this review, I was apprehensive about the smartphone’s performance too, especially when you consider that the competition is offering a 6-series Snapdragon chip for much cheaper. However, to the company’s credit, the device wasn’t a complete lag-fest and the V7+ managed to handle its own when it came to everyday tasks. Thanks to its low-res display and 4 gigs of RAM, jumping in and out of applications or navigating through the smartphone’s UI was buttery smooth. There were some minor hiccups when I jumped back into Chrome and had too many tabs open however, it wasn’t prominent enough and occurred occasionally. The smartphone managed to retain most of my applications in memory too, which made multitasking a breeze as well.

Unfortunately, if you’re a hardcore mobile gamer then you will be left wanting for more with the V7+. While the smartphone is perfectly capable of running any title from the Play Store, intensive games like Asphalt 8 will require you to tone down the graphics settings. Moreover, I faced scaling issues with some games and certain elements were often cut-out on the V7 Plus. For instance, the in-game menu was cut from the sides when I played Clash Royale on the smartphone, which is a huge red flag in my books. Having said that, the smartphone manages thermals well and despite not having a metal back, the chassis stayed cool after playing a mix of games for a period of 40-45 minutes. 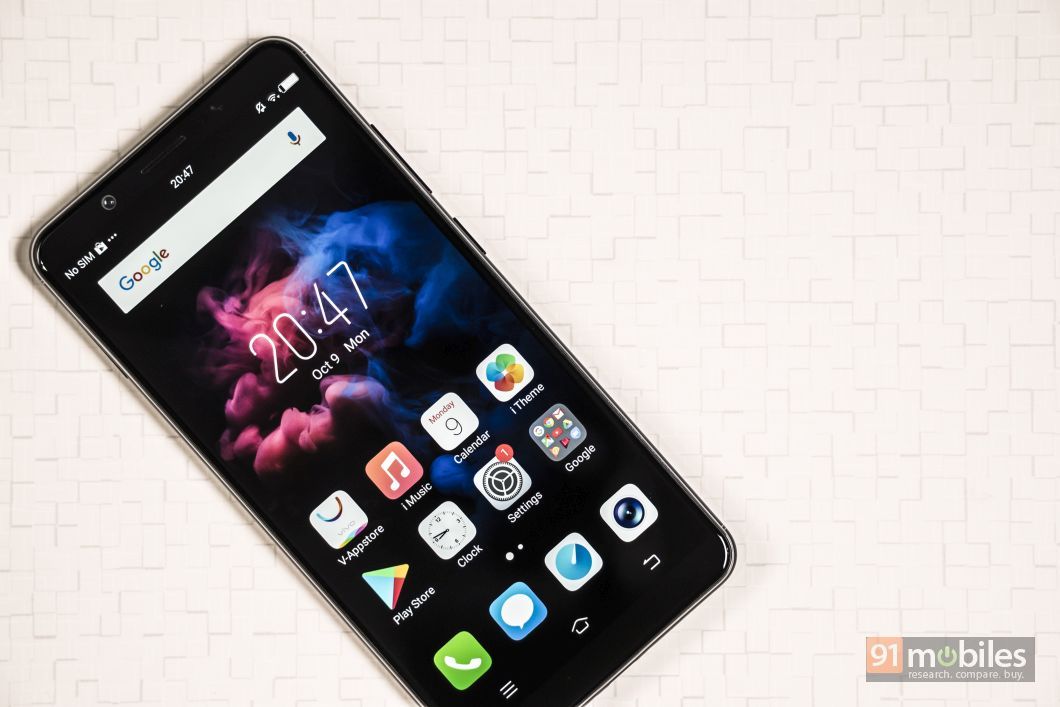 Retailing for Rs 21,990, the Vivo V7 Plus is a tough sell. While I do applaud the company for adopting the 18:9 aspect ratio and bringing it in an affordable package, the display isn’t crisp enough. Therefore, the company completely misses the point of having an elongated display in the first place, which is to have a more immersive media consumption experience. Despite its excellent cameras, I feel that the V7+ misses more than it hits and for the asking price of Rs 22K, you could get a more well-rounded option elsewhere. If you don’t mind stretching your budget a bit, then the OPPO F3 Plus (review) is not a bad shout, as it will give you better overall performance minus the bezel-less design. The recently launched Honor 9i (first impressions) is a solid competitor too, as it comes with a total of four cameras and a vivid display.