91mobiles.com
Home Reviews Xiaomi Redmi Note 5 Pro review: the complete package
Expert Rating
4.5/5
Design
★★★★★
★★★★★
Display
★★★★★
★★★★★
Software
★★★★★
★★★★★
Camera
★★★★★
★★★★★
Performance
★★★★★
★★★★★
Battery
★★★★★
★★★★★
ProsCons
Xiaomi is proudly claiming to be the number one smartphone brand in India, and understandably, Samsung doesn’t agree. While I’m not one to take sides, the fact that Xiaomi has even come close to challenging the Chaebol, a company which has been topping the charts in the country for a very long time, is no mean feat. And that too within just four years of entering the subcontinent. While there are quite a few reasons for Xiaomi’s phenomenal growth, its affordable range of smartphones that offer great value for money have contributed significantly of course. That said, Xiaomi hasn’t really been fast enough when it comes to following global trends. Till yesterday, it only had one phone with dual cameras and none with an 18:9 display in India. Also, it didn’t really have a single phone in its portfolio that could be called a complete package in the true sense. That changes with the new Redmi Note 5 Pro. This baby rocks dual cameras and an 18:9 display, apart from offering solid specs, a powerful selfie shooter and a capacious battery, and on the face of it, doesn’t look like it misses out on any of the essential features. Not only is the Redmi Note 5 Pro the first phone from Xiaomi that brings dual cameras and a near bezel-less display, it’s also the strongest selfie smartphone from the brand yet. 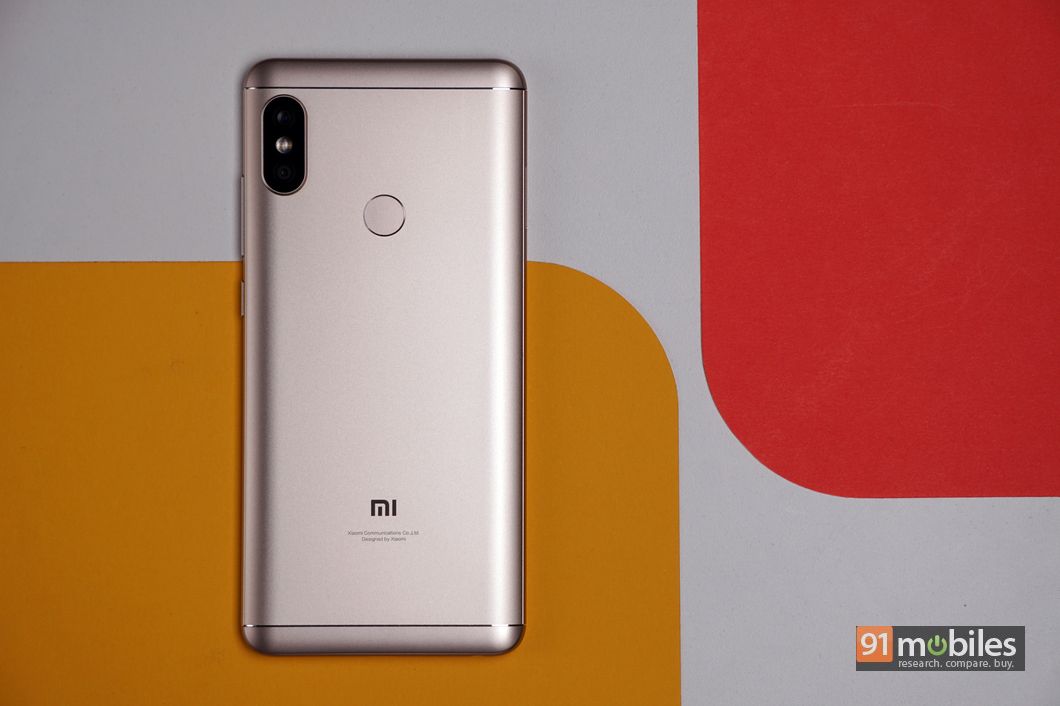 The Redmi Note 5 Pro comes as a souped-up variant of the Redmi Note 5, a smartphone that was announced for India on the same stage. While the Redmi Note 5 is basically the Redmi 5 Plus that was launched in China earlier, the Note 5 Pro is actually a global launch, going on sale for the very first time in India. This is one of the things that make it special, but I’m just getting started…

The Redmi Note 5 Pro ticks all the right boxes in terms of the most coveted features, follows global trends and more importantly, delivers on almost everything that it promises. It’s not without its share of quirks though. Despite that however, it comes across as one of the most compelling smartphones priced south of Rs 20,000. Interested in knowing more? Read on. 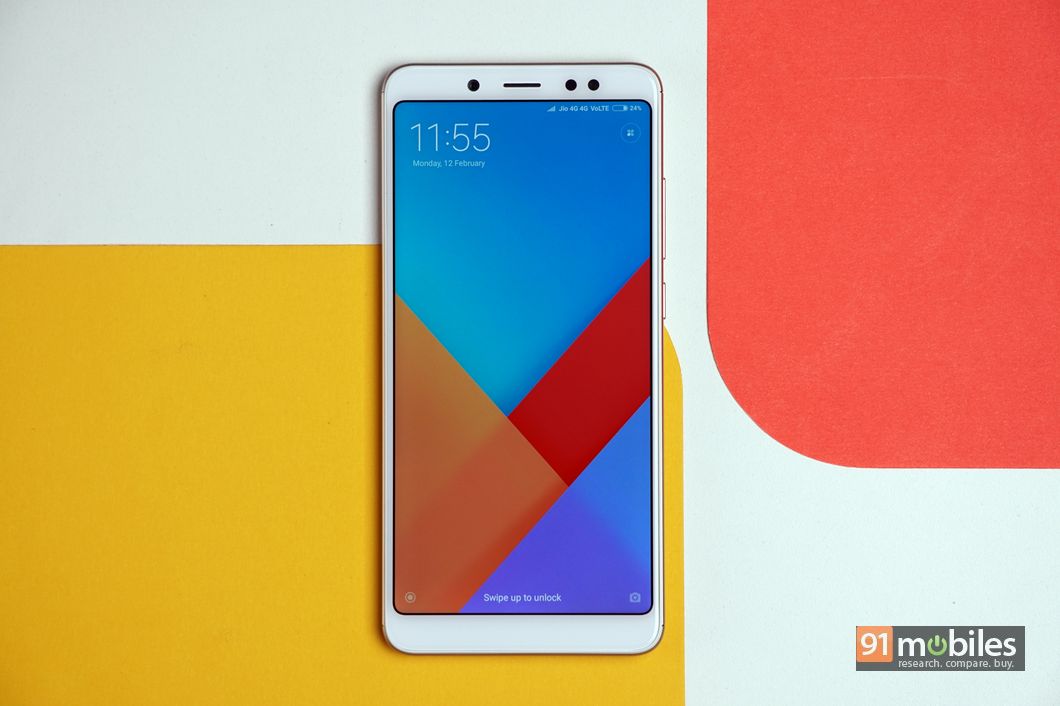 While the Pro model shares its dimensions, screen specs and design language with its Redmi Note 5 sibling, the two are actually as different as chalk and cheese. For one, the Note 5 Pro comes powered by the octa-core Snapdragon 636 chipset, in comparison to the Note 5 that utilises the SD625 SoC. Next, the Pro model also has a 6GB RAM variant, unlike the Note 5. Also, the cameras on the two phones are quite different – the Pro gets a dual camera setup (comprising 12MP + 5MP sensors) and a 20MP front cam with a selfie light. In comparison, the Redmi Note 5 sports a single 12MP camera at the back, and a basic 5-meg shooter at front, each with its own flash.

Up front is a 5.99-inch display, with the slimmest bezels you have ever seen on a Xiaomi phone. The screen’s 18:9 aspect ratio means the front is almost all screen, and the overall device size is akin to a conventional 5.5-inch phone. While the front looks good because of the slim bezels and the dual cameras add a bit of character to the back, the Note 5 Pro may not turn heads for its looks. The metal unibody feels quite sturdy though. Because of the camera bump containing the vertically-arranged dual shooters at the back, the phone wobbles slightly when kept on a flat surface.

With nicely rounded edges, the phone nestles well in the palm, and doesn’t feel too heavy or unwieldy. One interesting design difference between the Redmi Note 5 Pro and the Note 5 is that in the former, the 3.5mm headset socket has been placed at the bottom. The IR blaster can be found on its usual place at the top though. Also, unfortunately, the Pro (and its sibling) stick to the older micro-USB port and miss out on USB Type-C. 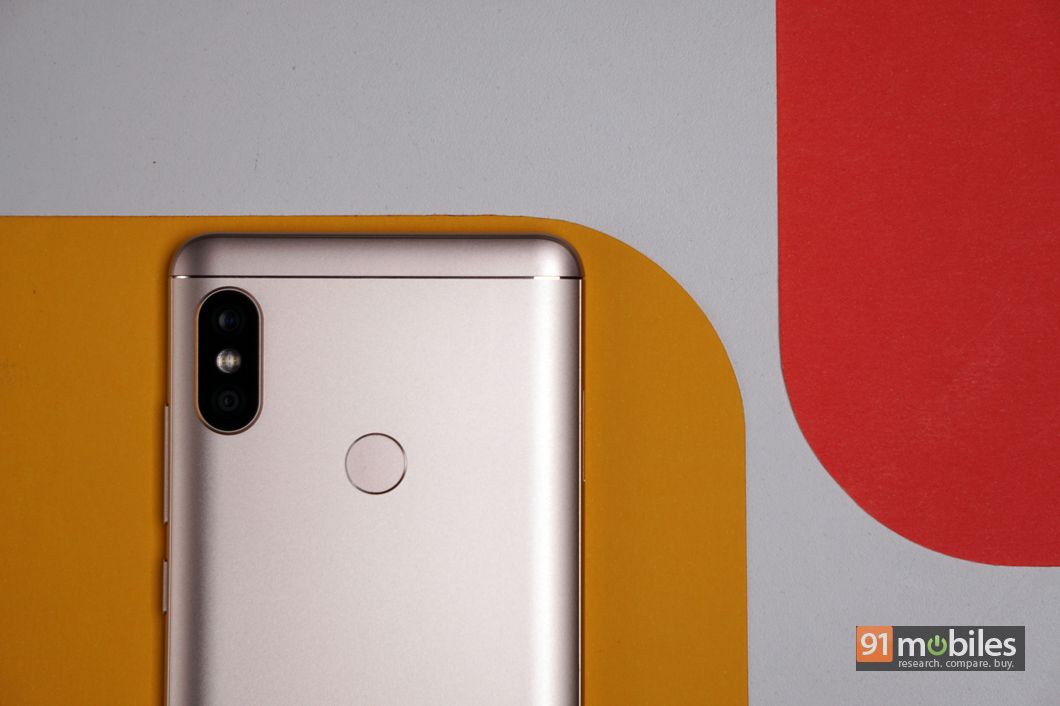 I don’t really need to tell you how important smartphone cameras are in this day and age, and the Redmi Note 5 Pro comes packed in this regard. The 20MP front camera comes with its own selfie flash, and in terms of resolution, is pretty much the most powerful seen on a Xiaomi phone yet. It comes armed with a software-based depth mode as well, and can take good selfies. The dual camera setup at the rear comprises a 12MP main sensor with 1.25 micron pixel size, aided by a 5MP depth sensor. And thanks to this implementation, it offers a portrait mode that can do bokeh. 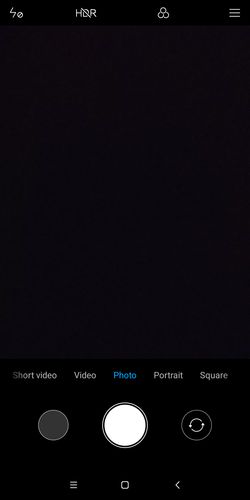 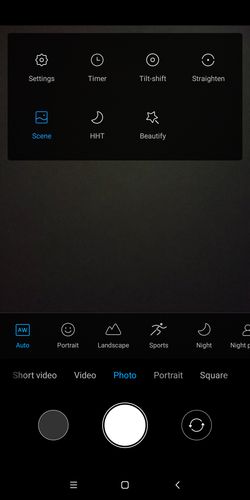 Overall, the rear cameras offer solid results across different shooting conditions. The images turn out crisp and natural, and you also get an HDR mode which is quite effective, without being too obtrusive or making the images look artificial. Low-light shots turned out quite good too, and don’t show too much noise. On the flip side, the default camera app on the Redmi Note 5 Pro doesn’t offer an option to shoot video at 4K, and this is surprising considering the chipset supports it. I wouldn’t really hold this against the Pro though. Here are some images shot using the Redmi Note 5 Pro.

In terms of software, the Redmi Note 5 Pro runs MIUI 9 with Android Nougat as base. Expect the usual MIUI goodies, including complete customisability with themes, dual apps, second space for those who want to keep work and play (or wife and girlfriend) separate, a full-fledged security manager, permissions manager, a reading mode for the display, etc. I especially love the subtle features – such as the Copy OTP feature in messages and the option to turn off just one instance of a recurring alarm, useful for when there’s a mid-week holiday. 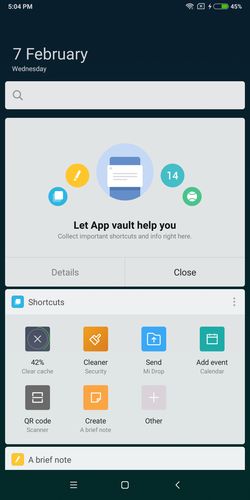 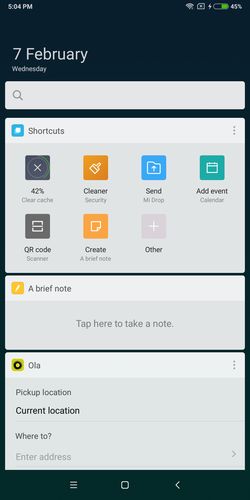 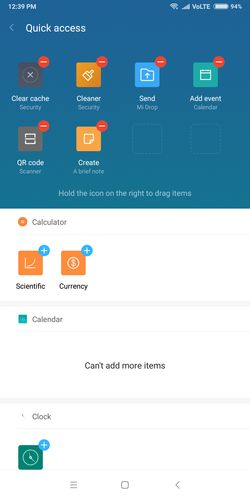 One new feature worth mentioning is App Vault, which gets its own dedicated panel that pops out when you swipe right from the main home screen. App Vault gives you a bunch of customisable cards, which include shortcuts to apps and tasks, notes, cricket scores, and calendar. It even integrates Ola, allowing you to book cabs directly without needing the Ola app.

Thanks to AI capabilities, the device will also get face unlock capabilities via an OTA update, which will be rolled out in March.

The Note 5 Pro holds the distinction of being the first phone in India to come powered by the new Snapdragon 636 chipset. The octa-core Kyro CPU setup is clocked at 1.8GHz, and comes with Adreno 509 graphics. In real-life usage, it churns out a solid and smooth performance, without any overheating issues even when stressed. It’s mated to 4 gigs of RAM in my review unit, but there’s a 6GB RAM variant available too, suitable in case you feel you’re a power user and need better multitasking capabilities. That said, I found the 4GB RAM model to be quite zippy overall. Out of the built in 64GB storage, around 53 gigs is available to use out of the box. 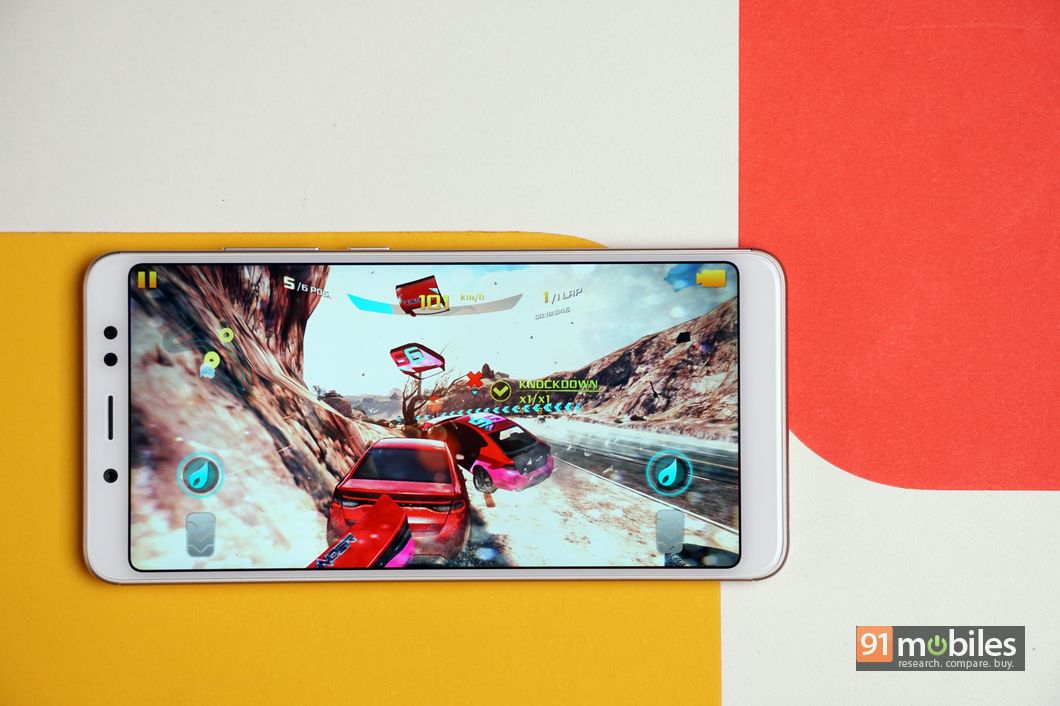 Connectivity options on the dual-SIM hybrid phone are fairly standard, and include dual-band Wi-Fi, 4G with VoLTE, and GPS, apart from the aforementioned IR blaster that works hand in hand with the preloaded Mi Remote app to convert your phone into a universal remote.

The 4,000mAh battery delivers on its promise of offering all-day battery life, and therefore, you probably won’t need to hunt for a power source during the day, unless your usage is really quite heavy. The 91mobiles video loop test ran for nearly 21 hours before the battery died, so that should give you an idea of the kind of battery life this phone offers. 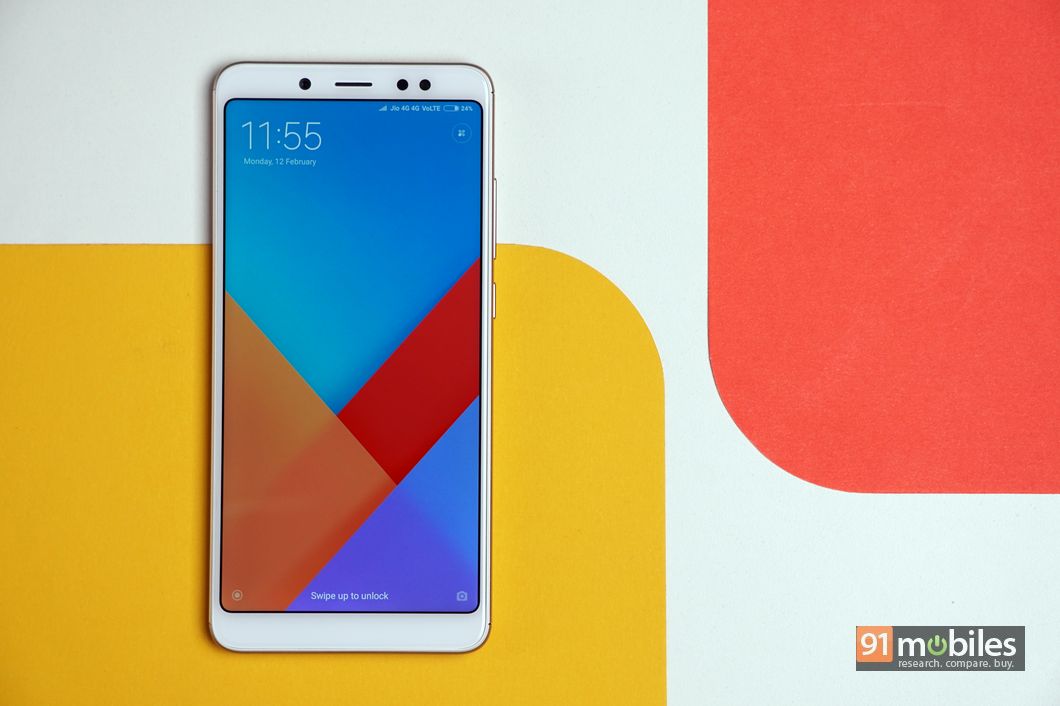 As I mentioned at the beginning of this review, the Redmi Note 5 Pro barely misses out on any feature. If I were to nitpick, I would list the lack of 4K video recording and the use of a micro-USB port instead of the newer USB Type-C as cons. In reality though, the only thing I’d really count as a negative is the missing support for fast charging. If you consider the competition, the Honor 9i (review), the Moto G5S Plus (review), the Infinix Zero 5 (review) and Xiaomi’s own Mi A1 (review) come to mind, but nothing really comes close to the Redmi Note 5 Pro when it comes to offering everything in terms of dual cameras, 18:9 display, performance and battery life. At the end of the day, it boils down to the question – which phone offers the complete package. And I’d say that the Xiaomi Redmi Note 5 Pro comes very, very close.