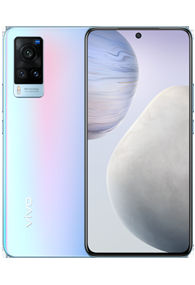 You might have guessed by now what we’re referring to. Smartphone brands partnering with famous cameramakers to improve the photography chops on their smartphones (the partnership between Nokia and Zeiss is the most popular) isn’t a new concept, and it seems more phone brands are taking this route now. Huawei and Leica have been working with each other for the Chinese giant’s P and Mate series, whereas OnePlus recently joined hands with Hasselblad for helping finetune the cameras on the OnePlus 9 series. 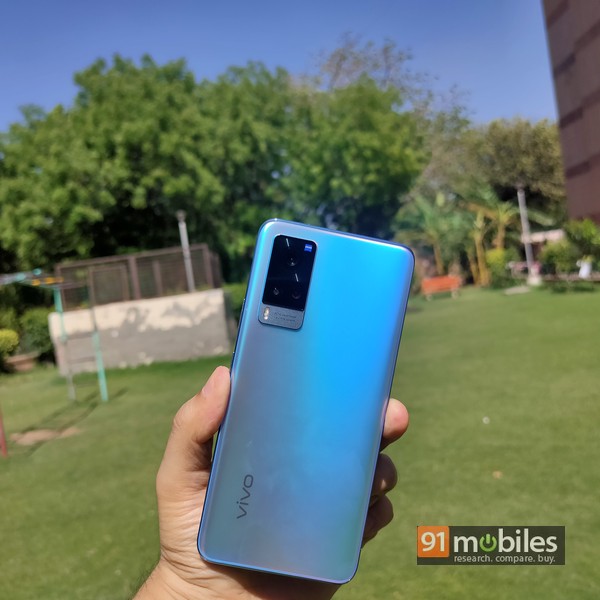 In the same vein, Vivo has partnered with Zeiss for the first time for its X60 series. Vivo has been working towards improving its photography capabilities for a while now, with last year’s X50 series (review) being a surprise package. Thanks to this new partnership with Zeiss, Vivo is ensuring we’re well and truly aware of the camera prowess of the X50 series’ successors from the get-go. The higher-end X60 Pro (review) and X60 Pro+ (review) have already gone through our review grind, and now it’s time to take a look at the most affordable offering in the range – the Vivo X60. I’ve been using it for almost a week to bring you the Vivo X60 review. Without any further ado, let’s dive in.

One thing that’s evident about the X60 is that you shouldn’t consider it from the lens of this being a Vivo smartphone. The reason is simple; the X60 trio looks a class apart from the other offerings from the brand’s stables. The base model in the series – the Vivo X60 – features an attractive design, powerful hardware, impressive cameras, and a battery that doesn’t know how to give up… all at an enticing, flagship killer pricing of Rs 37,999.

That’s not to say that the Vivo X60 doesn’t have any cons. But if you’re in the market for a capable flagship-grade smartphone in the sub-Rs 40k segment, then the Vivo X60 simply can’t be ignored.

We’ve already reviewed the Vivo X60’s more accomplished siblings, and therefore, wouldn’t want to repeat the same points. In fact, if you take a look at the spec sheet of the Vivo X60 and X60 Pro, you’d notice that the handsets are eerily similar. Hence, I’d be focusing on the common attributes briefly, and then talk about the specific distinguishing factors of the X60. 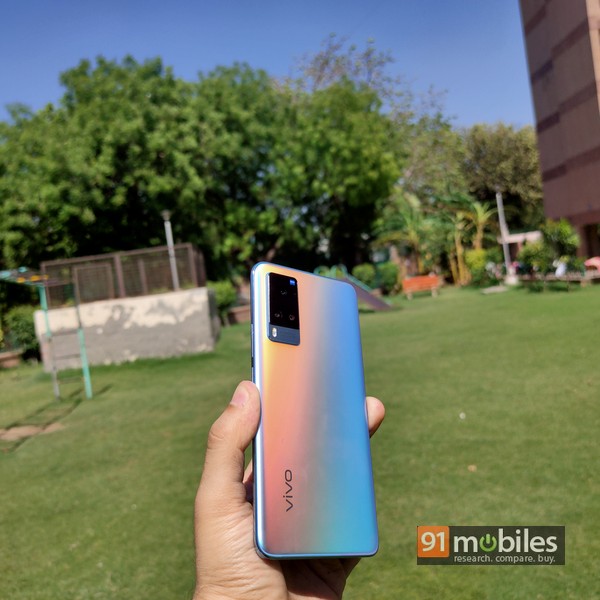 From the outside, both the Vivo X60 and X60 Pro are twins. And that means the X60 immediately grabs your attention with its unique gradient finish. We’ve seen a fair share of phones with gradient patterns, and yet Vivo has been able to make the X60’s panel look quite appealing. Available in Midnight Black and Shimmer Blue hues, I got the latter, and it was an instant conversation starter with anyone who laid their eyes on it. 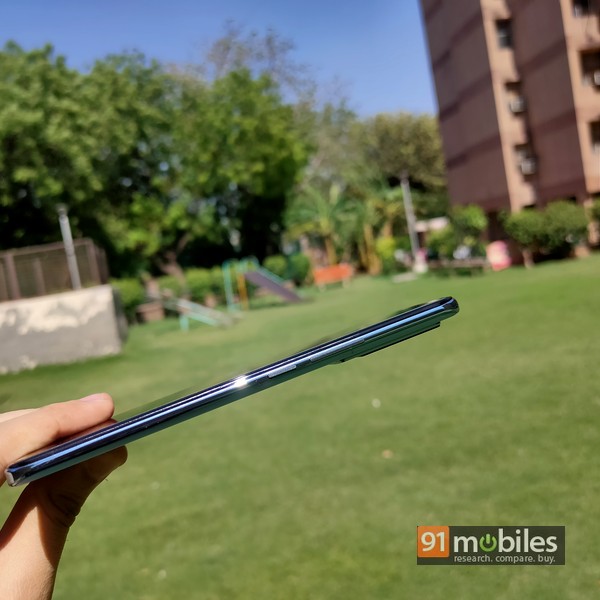 Despite its weight of 176g, it feels quite lightweight, and is sleek too, measuring just 7.3mm around its waist. Despite its enticing looks, however, I had to use the phone with the bundled transparent case, for its back cover is quite slippery. And now that the summers are here, hands turn sweaty within minutes of using the device. Not to mention the fact that the camera module on the X60 juts out quite a bit. While the button and port placement are bog-standard (one can’t even lament about the missing headphone socket anymore), I did like the textured pattern on the power toggle, making it easier to locate by feel alone. 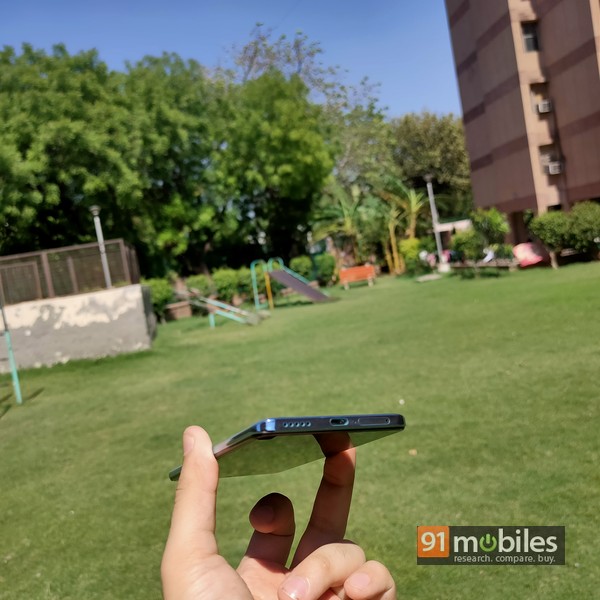 The fascia is dominated by a 6.56-inch AMOLED screen with full HD+ resolution. As expected of 2021’s flagships, the screen features HDR 10+ support and offers a refresh rate of 120Hz. The punch hole isn’t too distracting either, and doesn’t take anything away from the immersive experience provided by the display. I loved making use of my YouTube premium subscription to binge-watch movies after a long day at work. That said, the edge detection isn’t up to the mark as I had to hold the phone in a certain manner to ensure that the screen doesn’t register any inadvertent touches. 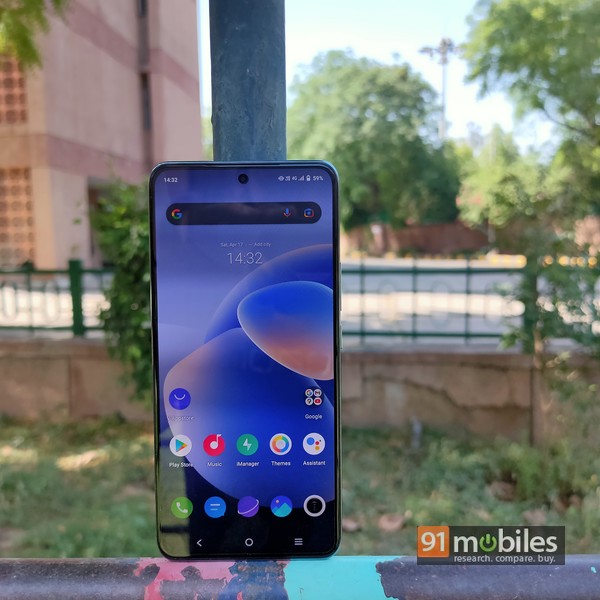 Apart from the outer appearance, the X60 shares a lot of similarities with the Vivo X60 Pro’s innards too. The smartphone draws power from the Qualcomm Snapdragon 870 chipset, a souped-up iteration of last year’s Snapdragon 865 SoC. The 5G-enabled octa-core silicon ensures that the device can handle anything thrown at it like a champ. During my week-long usage, I didn’t find any sort of lag or stutters despite using multiple apps. Switching between them was instantaneous too, thanks to the meaty 8 gigs of RAM. There’s 3 gigs of virtual RAM as well that allows the device to borrow space from the storage to allot to RAM. In fact, the brand claims that up to 20 apps can be cached on the handset by combining virtual RAM with the RAM on board. 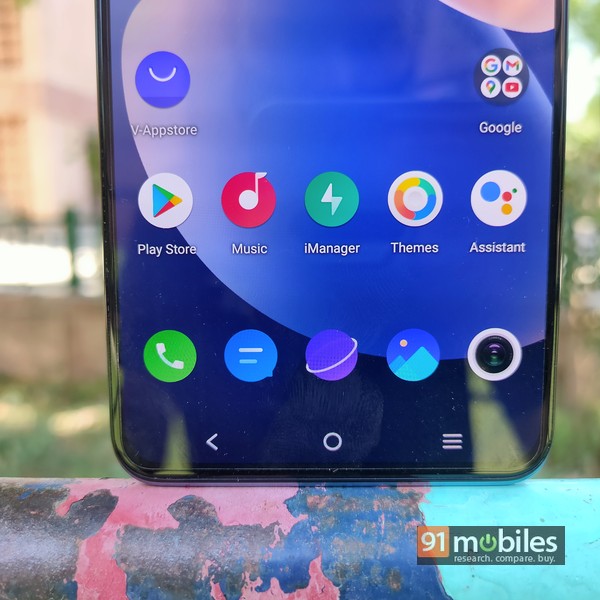 With the Adreno 650 GPU, gaming on the Vivo X60 was a delight too. I played Call of Duty Mobile and Asphalt 9 titles at the highest settings for more than 30 minutes, and the experience was flawless. The device does tend to warm up sometimes, but not always, and it doesn’t impact the performance either. Taking care of your storage needs is 128GB UFS 3.1 storage, though you can’t expand it further.

One of the biggest differences between the Vivo X60 and X60 Pro is the primary camera’s aperture. While both the smartphones come with a triple-camera array that has a 48MP shooter at the helm, X60’s snapper has an aperture of f/1.79 (vs f/1.48 on the X60 Pro). Apart from the size of the opening, however, the sensors are the same in terms of their size and pixel size as well. The remaining two sensors are also the same – a 13MP wide-angle shooter, plus a 13MP telephoto camera that offers 2x optical zoom and doubles up as a depth camera. At the front, both the phones get a 32MP selfie lens. 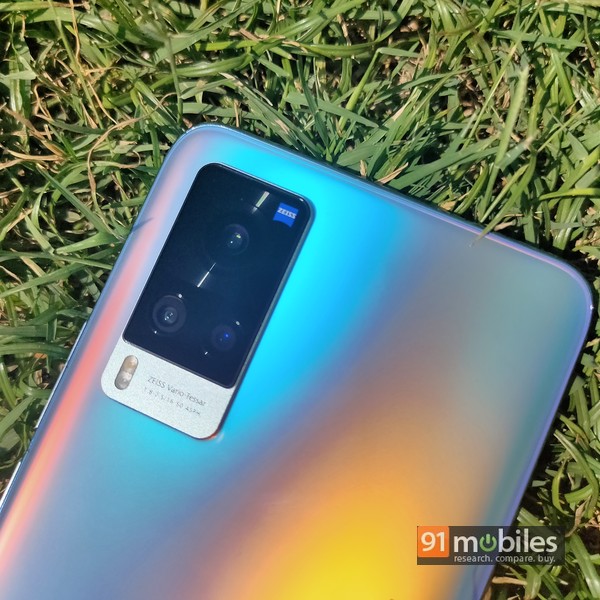 Quality-wise, the Vivo X60 nails all lighting conditions. Daylight shots capture an amazing level of detail, and colour reproduction is pleasing too. Close-ups and portraits impress as well, while the photos taken in dim environments manage to keep the noise in check. Of course, you get AI and night mode along with many other options in the user-friendly camera app to help you capture the scene in the best manner. I found the AI to be aggressive in some cases, but it does work well in most scenarios. The night mode is quite capable as well, and there’s Super Moon mode too, if you want to capture the moon. Speaking of the night mode, I like the fact that the smartphone lets you use this feature with the wide-angle camera as well. You can even capture panoramas using the night mode. 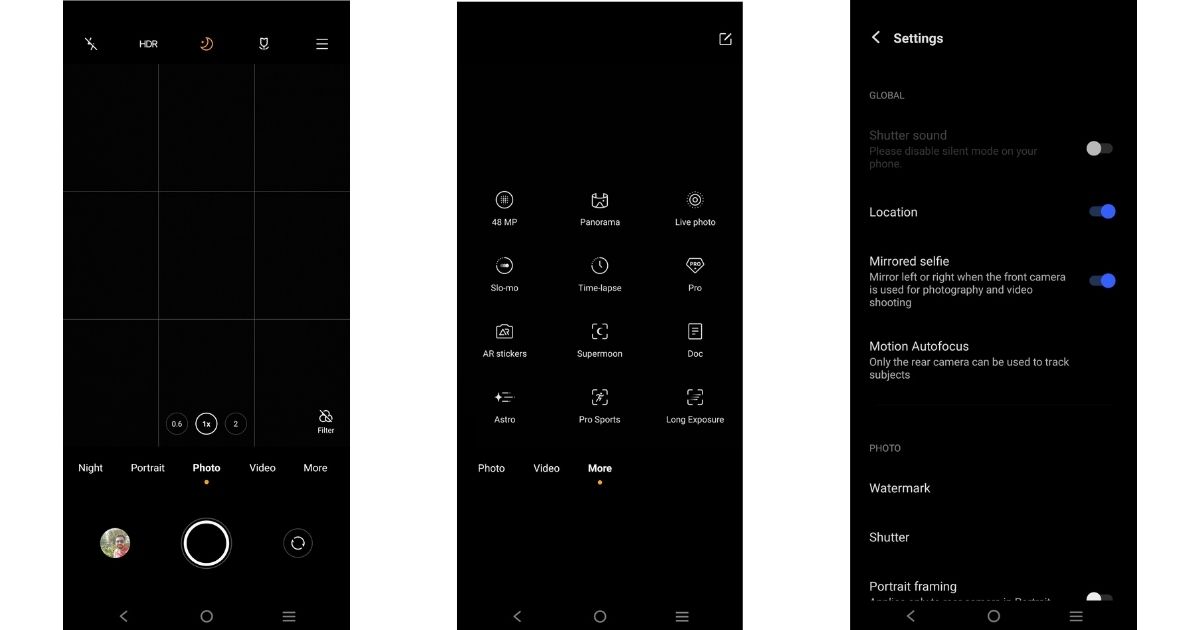 In short, I loved going trigger happy with the smartphone, as the pictures below suggest. Not just photos, the X60 impresses with its videography capabilities as well. It features 5-axis stabilisation to ensure smooth output. For selfies, the 32MP high-res sensor makes sure that your social media game is on point.

Lastly, the Vivo X60 comes equipped with a 4,300mAh battery, which is just 100mAh higher than the one on the X60 Pro. While it may not sound too big in an era when we’re seeing 6,000mAh batteries becoming the norm, it ensures that the phone lasts a day and then some. I barely needed to charge the device before the middle of the second day and got a screen-on time of as much as six hours.

Similar to the Vivo X60 Pro, the X60 comes with 33W Flash Charge functionality. That means you can juice it up from 10 to 100 percent in a little more than an hour. I do think that the device should’ve supported wireless charging as well, which is one of the hallmarks of a true flagship smartphone.

On the software side of things, the X60 comes with Funtouch OS 11.1 based on Android 11. If you’re using a Vivo phone after a long time, then you’ll be pleasantly surprised as to how far its interface has come. While there’s a lot of bloatware preinstalled, the UI isn’t too in your face with its icons and fonts, and offers a smooth experience too. That’s not to say that it’s perfect versus stock implementation though. 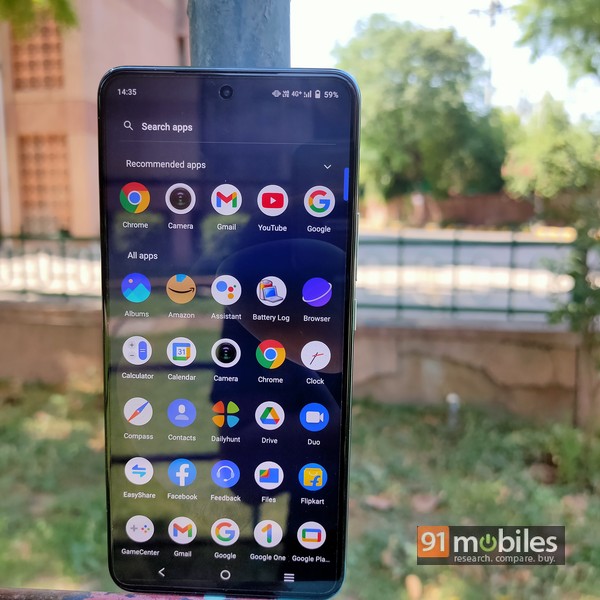 I do appreciate the fact that the Vivo X60 comes bundled with earphones inside the box, though you’d need to use them with a Type-C adapter. At an age where brands are removing wall chargers (talking about a certain brand from Cupertino), this is welcome indeed. Moreover, the earphones are quite good and ensure a great listening experience. Speaking of audio, the X60 doesn’t come with stereo speakers, though the single, bottom-firing speaker does offer loud output.

Vivo X60 has been priced at Rs 37,999, which means it goes up against some solid offerings in the sub-Rs 40k segment.

The biggest rival for the Vivo X60 is the OnePlus 9R (review). While the brand might have vacated the affordable flagship space with its newly launched OnePlus 9 (review) and OnePlus 9 Pro (review), it has tasked the OnePlus 9R to guard that territory. To that end, the OnePlus 9R does seem to be a loaded offering, and it matches the Vivo X60 almost toe to toe. So, the choice between the two comes down to personal preferences because the price difference is also just Rs 3k.

It’s interesting to see the Korean giant introducing devices in this segment too. The Galaxy S20 FE (review), as the name indicates, is an affordable variant of 2020’s flagship offering from the brand, the Galaxy S20, and is available below Rs 40k thanks to price cuts as well as deals. That said, the Galaxy S20 FE isn’t 5G capable (its 5G edition has been released recently in the market, and is priced higher), and it’s known to heat up a bit. The battery life isn’t great too.

The Mi 10T Pro (review) is yet another powerful rival for the Vivo X60, especially due to the fact that it has some impressive specs on paper – a 108MP primary camera, 144Hz refresh rate screen (but no AMOLED panel), and a 5,000mAh battery. And if you keep aside the fact that Xiaomi hasn’t been able to make a mark in the Rs 20k and above segment yet, then it does require careful consideration. 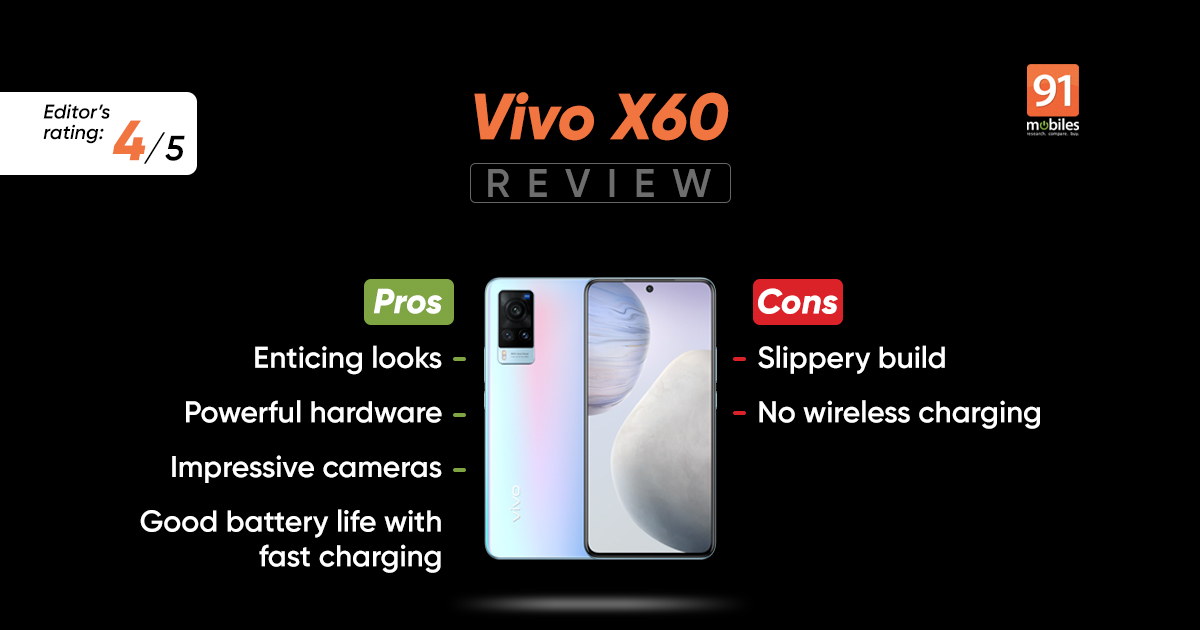 If you’ve been following this review, then the writing is on the wall. The Vivo X60 is a capable smartphone that ticks all the right boxes for an affordable flagship… including the 120Hz AMOLED display, the flagship-grade Snapdragon 870 chipset, and the fact that you get a highly capable, Zeiss-optimised 48MP triple-camera setup in a sleek package that will draw attention wherever you go, while packing in a meaty 4,300mAh cell.