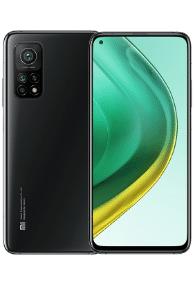 While Xiaomi has been a force to reckon with in the budget and mid-range segments, the company is still trying to find its footing in the premium flagship space in India. Xiaomi’s high-end flagship phones seem to have impressed consumers with their design and performance, but not so much with their pricing. The Mi 10, for example, was launched at around Rs 50,000, but now, the Mi 10T and Mi 10T Pro have come in at lower price points.

The Mi 10T and Mi 10T Pro offer flagship designs and specifications at prices that seem more in tune with what Xiaomi has been known for. Today, we’re looking at the Mi 10T Pro, which is the more specced out of the two and is priced at Rs 39,999. For this price, you get a 144Hz display, Snapdragon 865 chipset, 108MP triple cameras, and a 5,000mAh battery. The spec sheet speaks for itself, but how does it feel to use the Mi 10T Pro on a daily basis? Read on to find out. 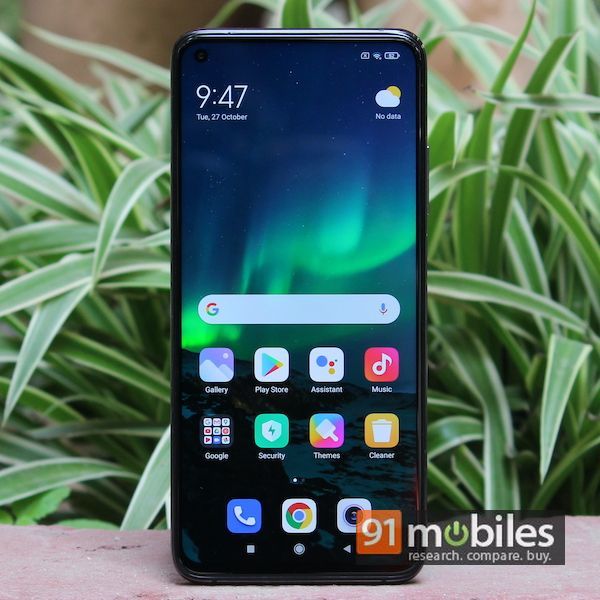 The Mi 10T Pro is a worthy flagship smartphone that offers pretty much everything you could ask for under Rs 40,000. The powerful camera system, blazing fast screen and performance, and ad-free MIUI 12 all work in its favour. The only thing missing is an AMOLED panel, but you probably won’t miss it after a while.

Out of the box, the Mi 10T Pro looks as premium as you would expect from a phone in this segment. You get a glossy Gorilla Glass 5 rear panel that is curved and offers a mirror-like reflective finish in Cosmic Black and Lunar Silver colour options. While the phone looks rich, the back panel, especially in Cosmic Black, will attract a lot of fingerprints, smudges and dust almost instantly. 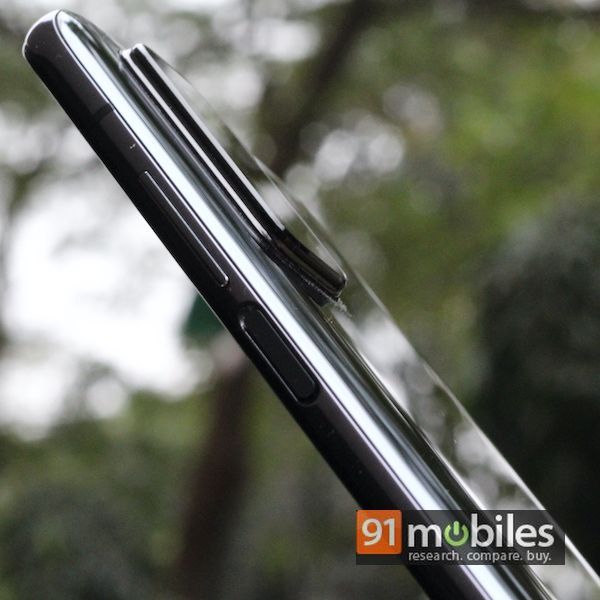 The Mi 10T Pro is a large phone that feels quite substantial in the hand. It weighs 218 grams and measures 9.33mm in thickness, which means it’s not the most comfortable phone to use in one hand. It also gets a really big camera bump, which will make the phone wobble on a flat surface. Compared to this, I personally prefer the sleek and lighter build of the OnePlus 8T. 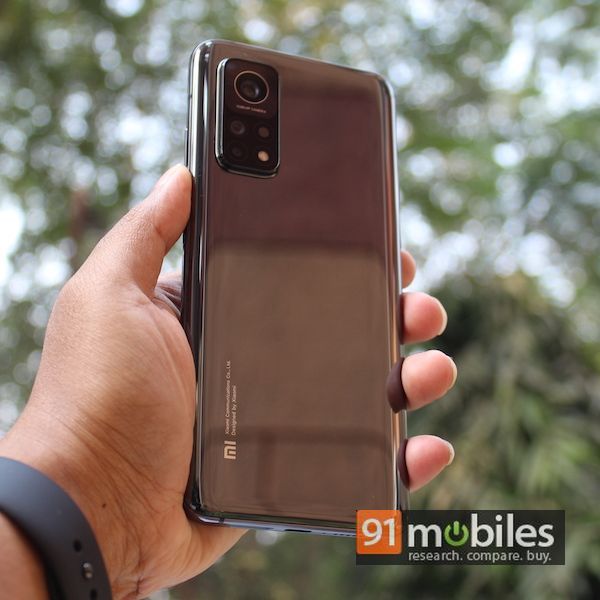 The Mi 10T Pro has a side-mounted fingerprint sensor just below the volume buttons. The IR blaster can be seen on the top while the bottom sees a speaker grille, Type-C port, and a dual-SIM tray. The phone does not support expandable storage and there’s no headphone jack as well. 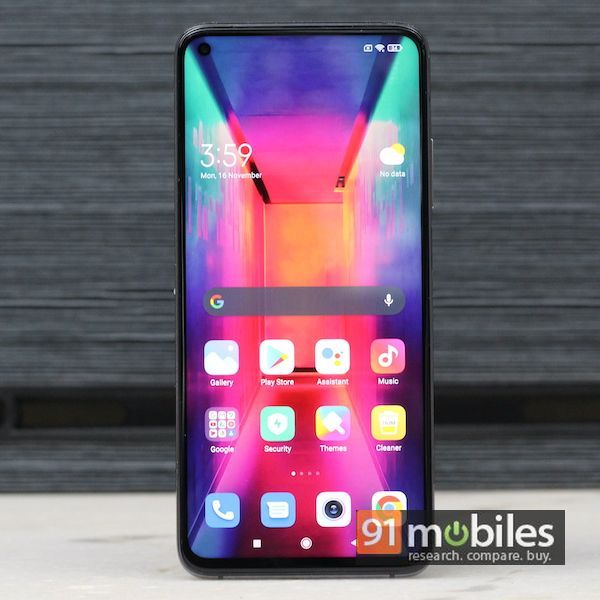 On the front, you get a 6.67-inch FHD+ (2,400 x 1,080) LCD display that supports up to 144Hz refresh rate. Xiaomi has introduced something called AdaptiveSync, which can automatically switch between seven refresh rates ranging from 30Hz to 144Hz depending on the content you’re watching. This is a smart way to conserve battery life as well. The display also supports DCI-P3 colour gamut, MEMC and HDR10. 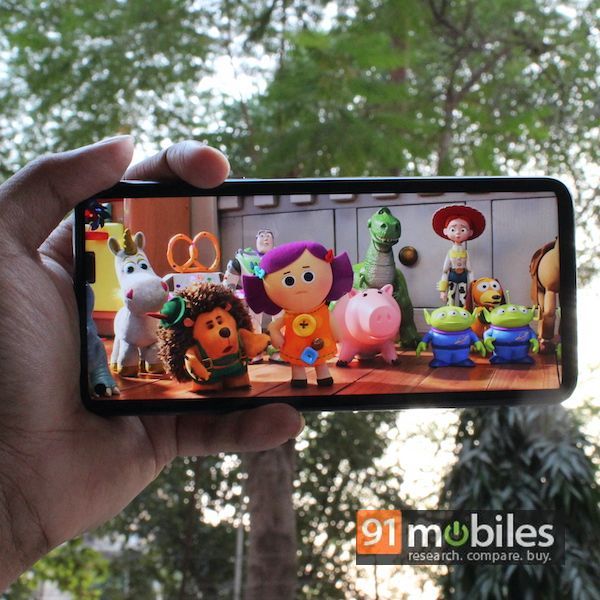 Xiaomi’s decision to choose LCD over AMOLED may disappoint users, but the company has used a high-quality panel LCD panel here. The screen offers good colour reproduction and there are tons of colour settings to choose from as per your taste. Viewing angles and brightness levels are also pretty good. The only thing that you are likely to miss is the inky blacks that you otherwise get from OLED displays. That said, the Mi 10T Pro is a fine phone to watch content on and play games. The 144Hz refresh rate and high touch response rate also makes it a terrific device to game on.

The Mi 10T Pro is equipped with a triple camera setup at the back that includes a 108MP high-resolution Samsung HMX sensor, a 13MP ultra-wide camera, and a 5MP macro camera. The phone also gets a 20MP front-facing camera. The M 10T Pro comes with a bunch of camera features, including portrait, night mode, VLOG, front and back, slow motion, long exposure, clone, and so on. The rear camera also supports up to 8K video recording at 30 fps. 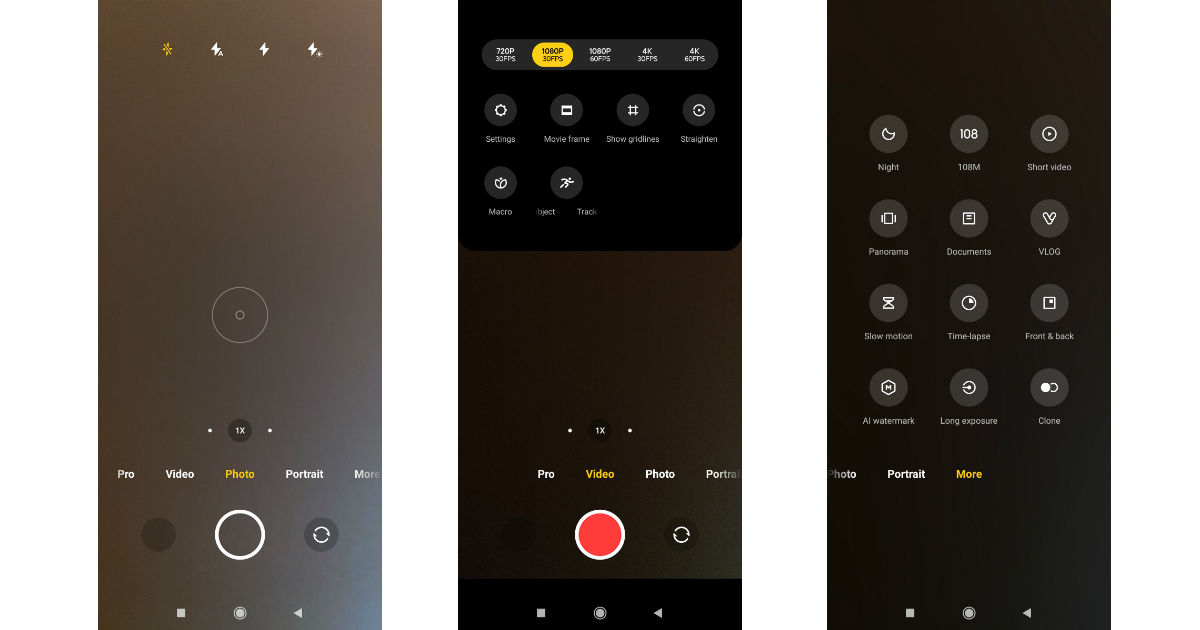 The 108MP primary camera can capture crisp photos in daylight with plenty of contrast. Dynamic range is not the best I’ve seen from flagship phones this year. The darker portions of photos in daylight, especially of trees, look extremely dark and noisy and the Mi 10T Pro’s AI isn’t able to help here. In comparison, I found the OnePlus 8T offers a more impressive dynamic range and is able to resolve the darker spots of a scene better than the Mi 10T Pro. 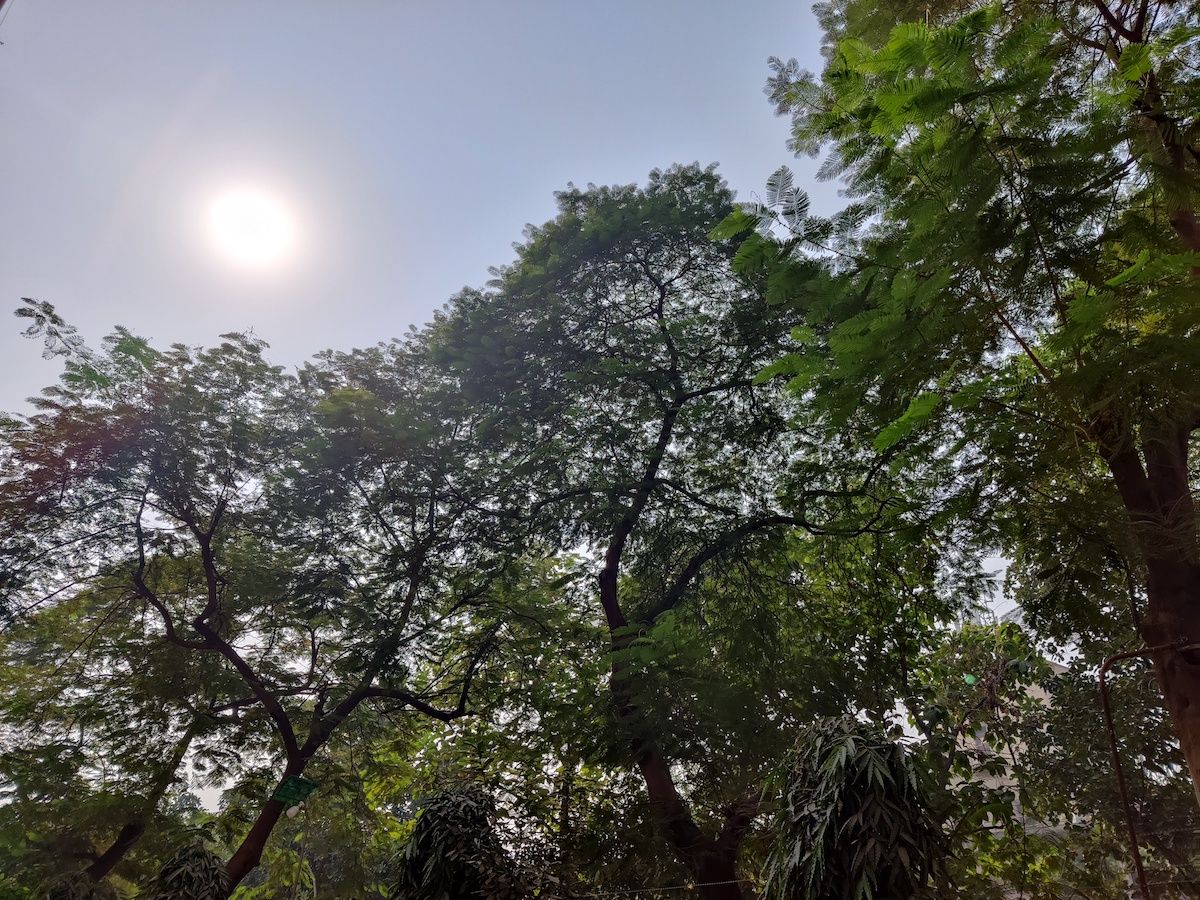 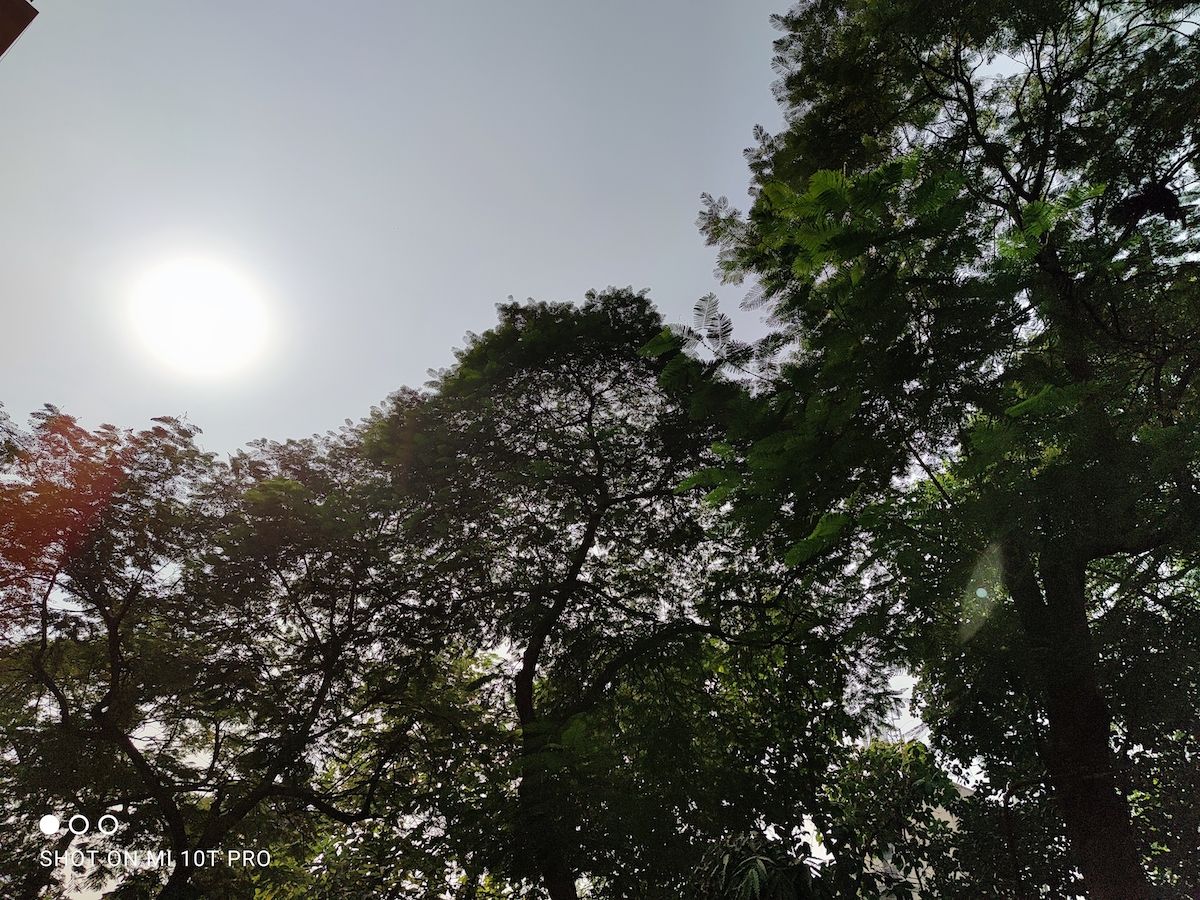 At times, the main camera’s large aperture tends to overexpose daytime settings, making it hard to capture the true blues or oranges of the sky. Here, the wide-angle lens performed better when it came to capturing the colours of the sky. In the shot below, the colour of the sky looks more accurate through the wide-angle lens and even the dynamic range is better, though you will see reduced details if you zoom into the shot. 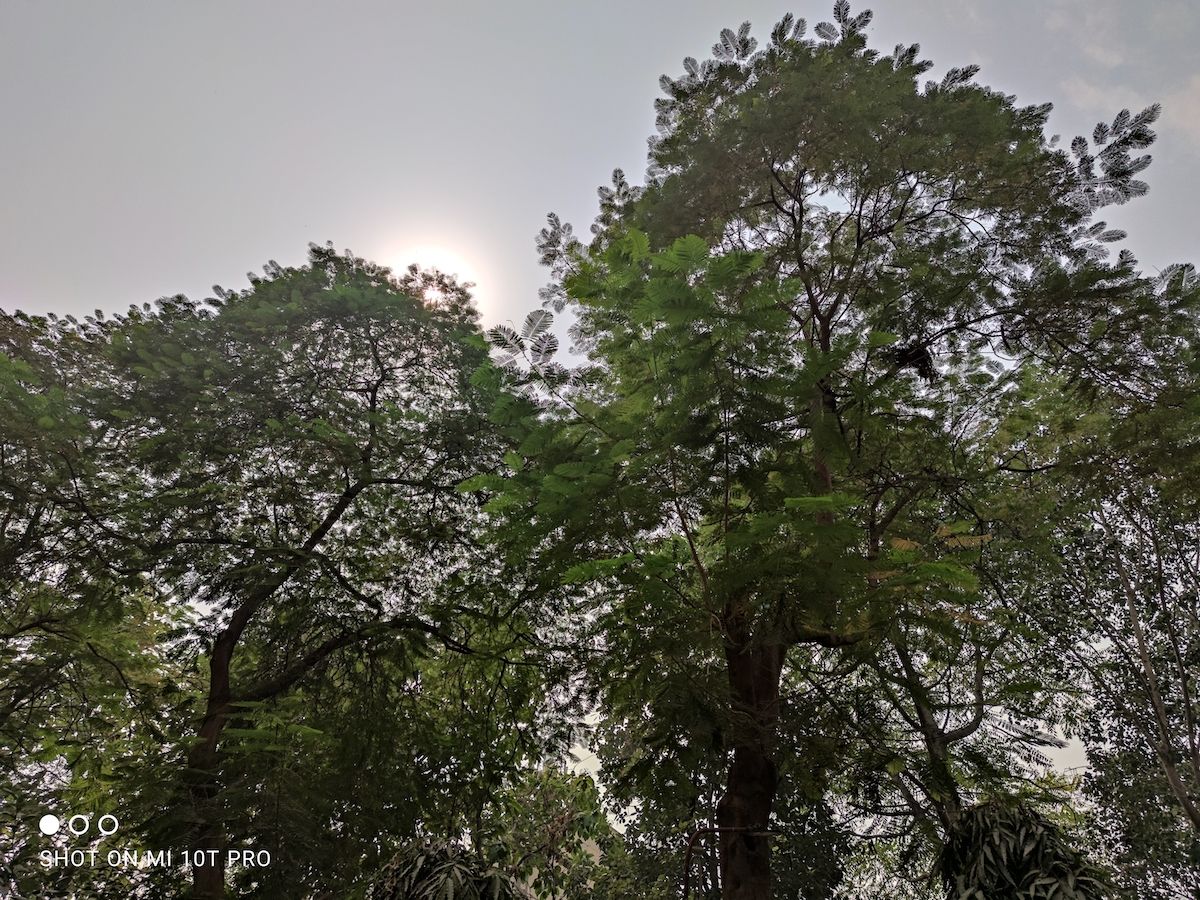 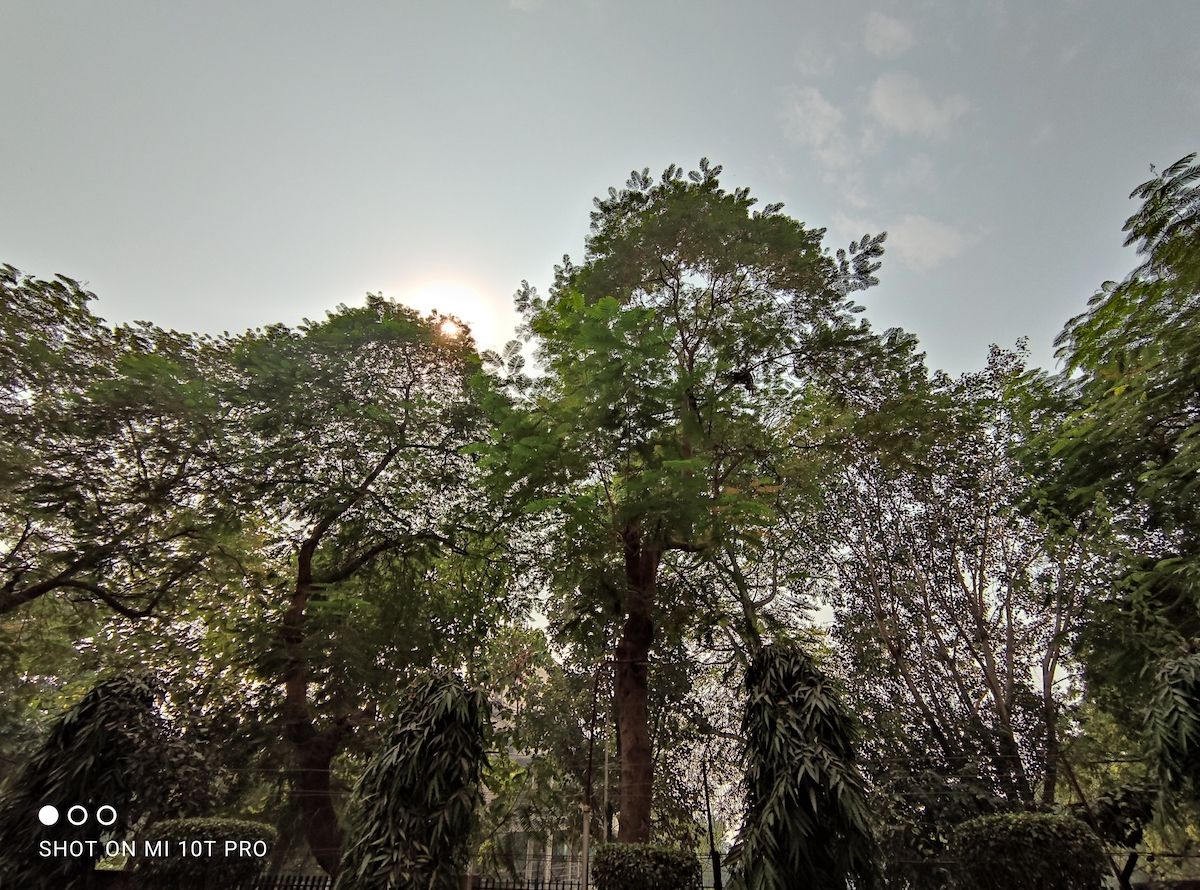 The Mi 10T Pro is a capable shooter in low-light conditions, but only when using the primary camera. I was able to capture some pleasing photos of Diwali-lit environments using the Night mode, though I wish the camera UI made it easier to switch to the Night mode. With enough artificial lights around, the AI does an impressive job at boosting exposure and reducing noise. However, the Mi 10T Pro’s Night mode doesn’t offer the same performance in really dark situations, and the wide-angle and macro lenses generally perform poorly after sunset. Lastly, we have the 5MP macro lens which can let you capture some close-up shots. However, the colour reproduction is not the best and the camera struggles to focus on the subject, so capturing a crisp and clear macro will be harder than expected. The 20MP front-facing camera will capture crisp selfies with great detail and colours, but it does tend to blow out the background more often than not.

The Mi 10T Pro is capable of shooting up to 8K video with the primary camera and they are quite stable thanks to OIS support. However, if you select the Steady Video option for added stability, the recording switches to the wide-angle lens instead of the primary camera. Additionally, videos captured using the primary sensor show the same issues I found with stills i.e contrasty look with dynamic range issues. Here again, I feel the OnePlus 8T and Samsung Galaxy S20 FE perform better in video recording.

Xiaomi has used the Qualcomm Snapdragon 865 SoC rather than the SD865+ for the Mi 10T Pro, which would have helped reduce the cost of the device. The chipset is paired with 8GB RAM and 128GB internal storage. No surprises, the phone feels extremely smooth and was consistently fast throughout the review period. Apps open quickly and browsing through the UI feels fluid thanks to the high refresh rate. The Mi 10T Pro does well in benchmarks and is neck-to-neck with the OnePlus 8T.

The Mi 10T Pro can handle most day-to-day tasks without breaking a sweat. Whether it’s browsing through social media apps, texting, or gaming, the Mi 10T Pro performs smoothly without lags. The phone is capable of running games like Call of Duty Mobile on the highest graphics settings and the fast touch response makes it a gaming powerhouse. 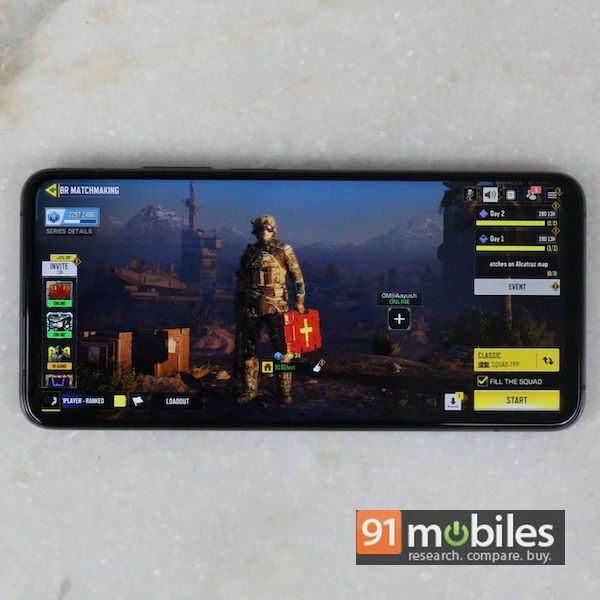 The device runs on MIUI 12 based on Android 10 instead of Android 11, which is kind of a bummer. The OnePlus 8T gets the advantage here for shipping with Android 11. MIUI 12 on the Mi 10T Pro is quite responsive and comes with a bunch of features that long-time Mi users will be familiar with. You do get some pre-loaded apps like Zili, Mi Pay, Mi Credit, Facebook, Amazon, and so that can be uninstalled. While there is some bloatware, MIUI 12 on the Mi 10T Pro comes ad-free which means you won’t see spammy notifications every now and then. 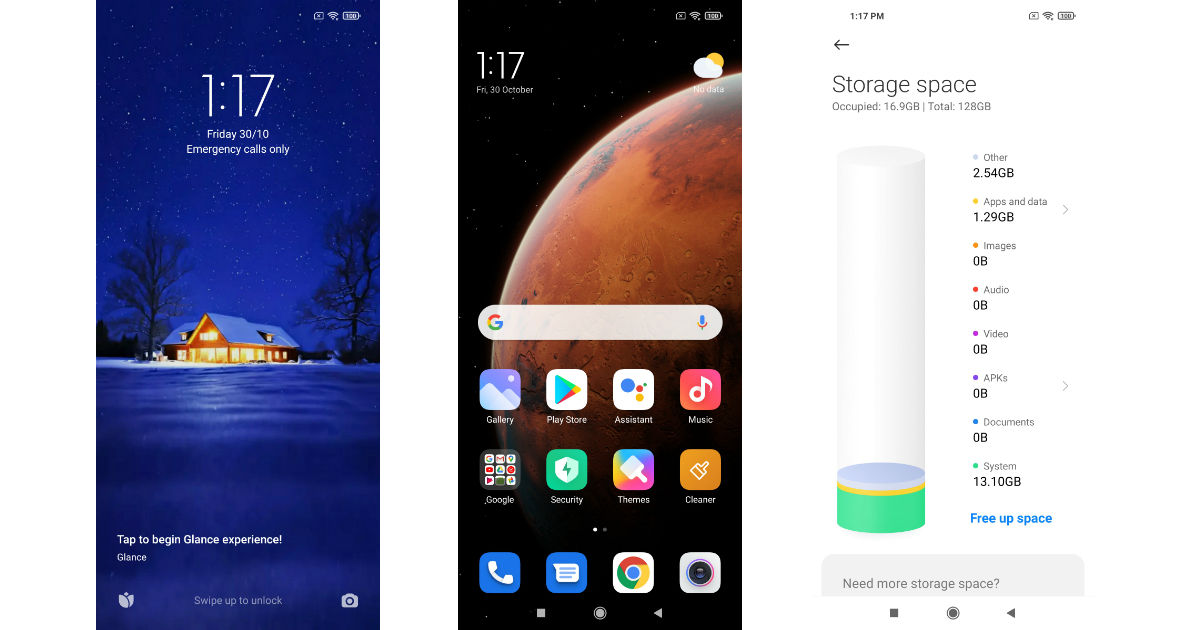 When it comes to general user experience, MIUI 12 is easy enough to get used. You get tons of wallpapers and themes to choose from and you have the option to switch from default home screen to app drawer via Settings. You can see the AdaptiveSync at work when browsing through the UI and various apps, which can sometimes feel less fluid than you would like to see from a 144Hz screen. The side fingerprint sensor feels snappy while the stereo speakers deliver clear sound with very little distortion even at higher volume levels. The haptics on the Mi 10T Pro is delightful and you can adjust the feedback levels to your liking through Settings. Lastly, the flagship does support 5G, but unfortunately, there’s no use for it right now as we’re still waiting for 5G networks to roll out in India.

The Mi 10T Pro offers a fantastic battery backup even on 144Hz thanks to its large 5,000mAh battery and power-efficient chipset. The phone easily takes you through a day on intensive usage and up to two days on moderate usage. In our PCMark battery test, the phone lasted an impressive 22 hours. The phone takes roughly 80 minutes to charge from 20 to 100 per cent using a 33W fast charger. I personally would have liked to see Xiaomi offer a faster-charging tech on its high-end phone similar to OnePlus’ 65W fast charging solution on the OnePlus 8T, but the long-lasting battery of the Mi 10T Pro probably won’t make you complain as much.

The Mi 10T Pro ticks a lot of the right boxes for a flagship smartphone under Rs 40,000. You definitely get your money’s worth with a fast and responsive screen, snappy performance, and long-lasting battery life. The Mi 10T Pro offers most of the high-end specifications available in 2020 without having to pay an exorbitant amount. Notably, the Mi 10T Pro is the most affordable smartphone to offer a 108MP camera, which is a definite win for Xiaomi.

That said, the LCD panel and dated Android 10 software are some reasons that could put you off from buying the Mi 10T Pro, especially considering you only need to send Rs 3,000 more for the OnePlus 8T which offers an AMOLED screen and Android 11 OS. The OnePlus 8T (review) also gets a sleeker and more convenient design. But if these features don’t both you, then the Mi 10T Pro should be your pick for the best value flagship in India.