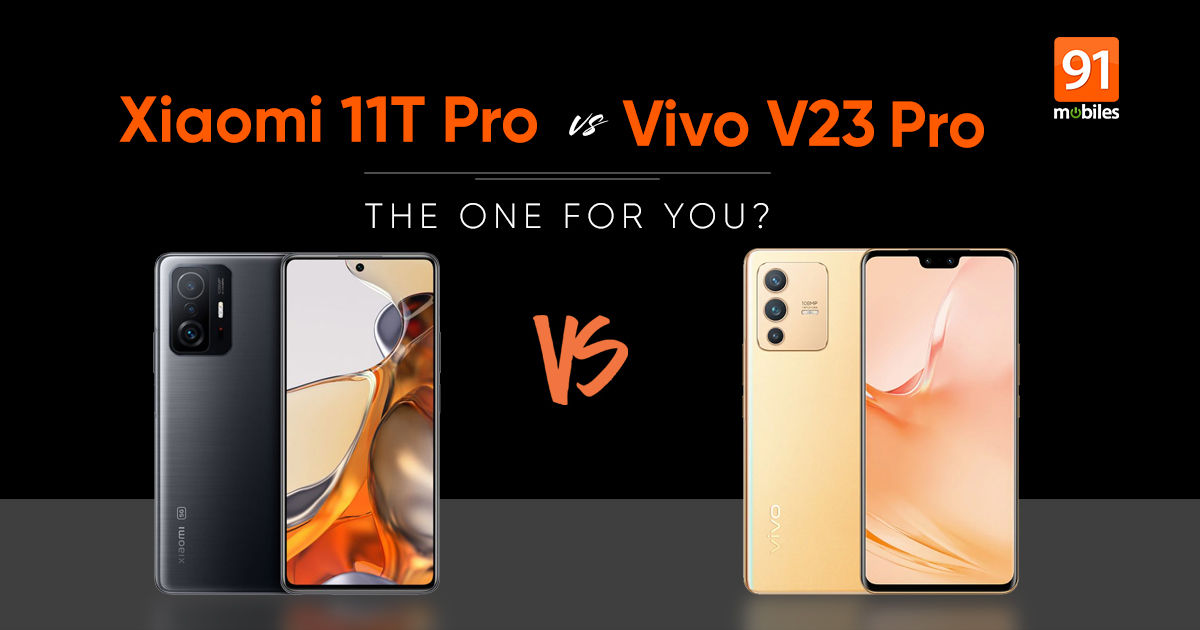 They are perhaps among the first names that will spring to most people’s minds when considering a phone for under Rs 40,000. And yet they are so different from each other. One is all about flair, style and cameras, the other about terrific specs and great value for money. So which of the two Pros should you go for – the stylish Vivo V23 Pro or the HyperCharged Xiaomi 11T Pro? Let us help you make up your mind. 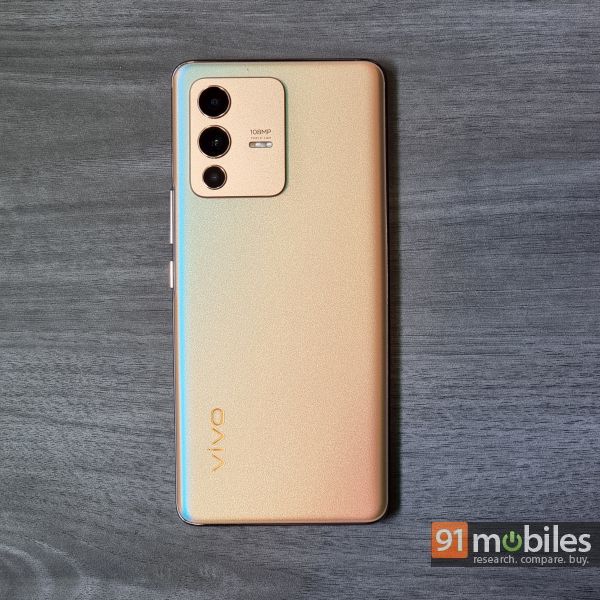 This is a total walkover for the Vivo V23 Pro (above). It is not as if the Xiaomi 11T Pro is a bad looking phone. It is just that it looks very routine as compared to the very svelte and sleek V23 Pro. Both phones have glass on front and back, and both have variants whose back changes colour. But there the similarity ends. The Vivo V23 Pro’s front has a curved display, while the Xiaomi 11T Pro (below) has a flat one, and while the back of the V23 Pro changes colour almost totally from gold to a greenish-blue shade (thanks to the Fluorite AG glass), the 11T Pro’s seems to pass through a few different shades, and never seems quite as comprehensive. The “feel” of the V23 Pro is much better with the back almost feeling like frosted glass. Finally, the V23 Pro is more compact (159.4mm length as compared to 164.1mm, 73.2mm width against 76.9mm), slimmer (7.36mm as against 8.8mm) and lighter (171g against 204g). The Vivo V23 Pro is perhaps the most stylish phone in the sub-Rs 40,000 segment, and makes the smart Xiaomi 11T Pro look relatively plain in comparison. Mind you, the Xiaomi 11T Pro does come with an IP53 rating while the Vivo V23 Pro has no rating whatsoever, making it vulnerable to dust and water. 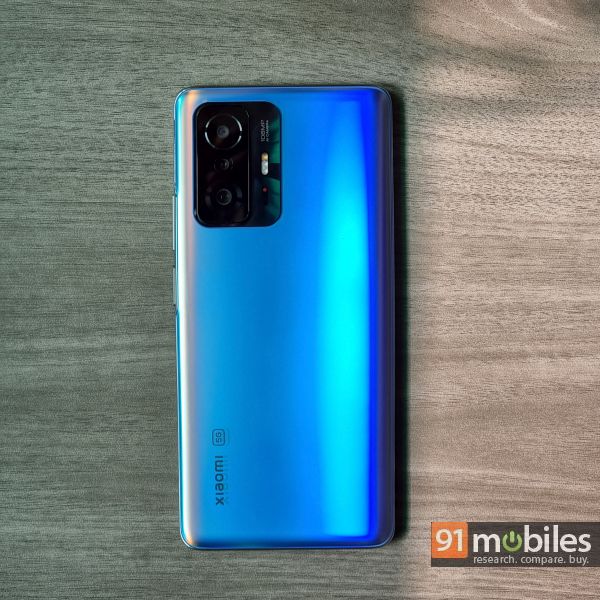 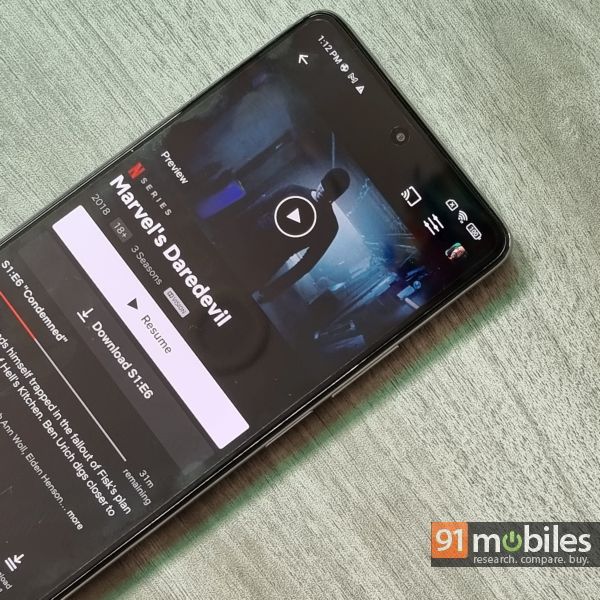 This gets interesting. The Vivo V23 Pro’s 6.56-inch full HD+ curved AMOLED display with a fingerprint scanner might appeal to many, but the flat 6.67-inch full HD+ AMOLED display on the Xiaomi 11T Pro comes with a higher refresh rate (120Hz as against 90Hz of the Vivo). The display of the 11T Pro also is a 10-bit display and capable of handling more colours than the 8-bit one on the V23 Pro. You are going to have to choose between a display that looks good and a display that makes content on it look good. We are going with the Xiaomi 11T Pro on this one! 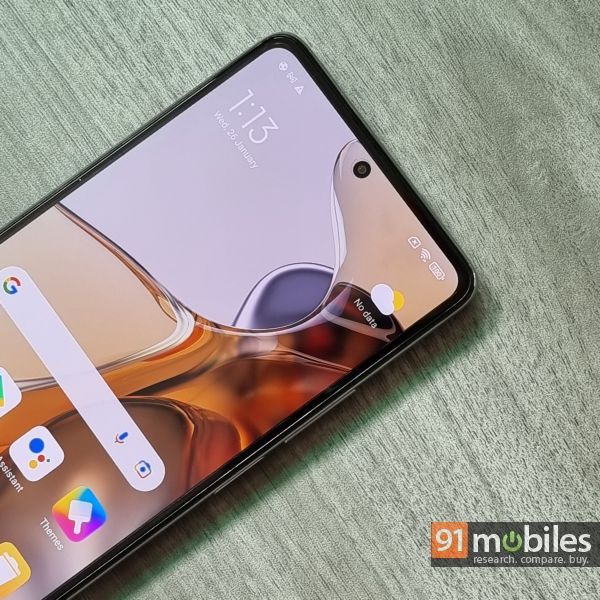 This is as big a walkover for the Xiaomi 11T Pro as design was for the Vivo V23 Pro. That’s because while the 11T Pro is powered by the flagship Qualcomm Snapdragon 888 processor, the V23 Pro runs on the MediaTek Dimensity 1200. The Dimensity 1200 is a very good processor, but it is considered to be closer in terms of performance to the Snapdragon 870, and not really in the class of the Snapdragon 888. The processor Force is very much with the Xiaomi 11T Pro here.

Round 4: RAM and storage

Both phones come with 8GB / 128 GB and 12 GB/ 256 GB RAM and storage variants. Neither has expandable memory. However, the Xiaomi 11T Pro also has an 8 GB/ 256 GB variant which comes between those two extremes. It gives the consumer one more RAM and storage option, which wins it the round.

Round 5: Gaming and multimedia Both phones come with very good processors and displays, making playing games and watching content on them an absolute treat. While some might prefer the more compact form factor and curved display of the V23 Pro, the Xiaomi 11T Pro wins the contest hands down because of its superior processor and its Harman Kardon stereo speakers. Not only can the Xiaomi 11T Pro handle pretty much every game at maxed out settings – something the Vivo V23 Pro can have issues with, especially with resource-hungry titles like Genshin Impact – but it can also deliver much better sound, thanks to those speakers (the V23 Pro has a single speaker). Both multimedia and gaming are far more immersive on the Xiaomi 11T Pro. 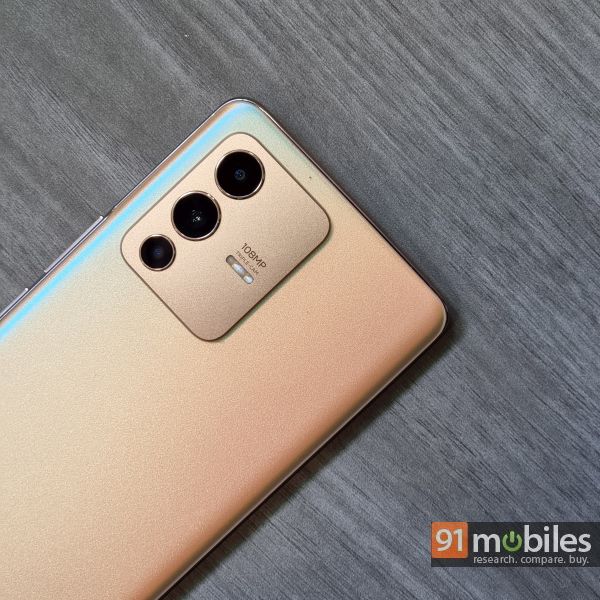 This is a clash of two very similar triple camera arrangements. Both phones sport a 108-megapixel main sensor and an 8-megapixel ultrawide sensor. The difference comes in terms of the third camera. Both phones have macro sensors, but whereas the Xiaomi 11T Pro has a 5-megapixel macro sensor with autofocus, the Vivo V23 Pro has a more modest 2-megapixel one. In terms of performance, however, we found the V23 Pro doing much better than the11T Pro, with more colourful pictures and slightly better detail, although those who love more realistic snaps might prefer the 11T Pro. The 11T Pro has a clear edge in terms of the macro camera, delivering far greater detail and clarity, but the V2 Pro scores on the ultrawide too, with far more pleasing colours. Round that off with significantly better video and low light performance, and the Vivo V23 Pro wins this round. 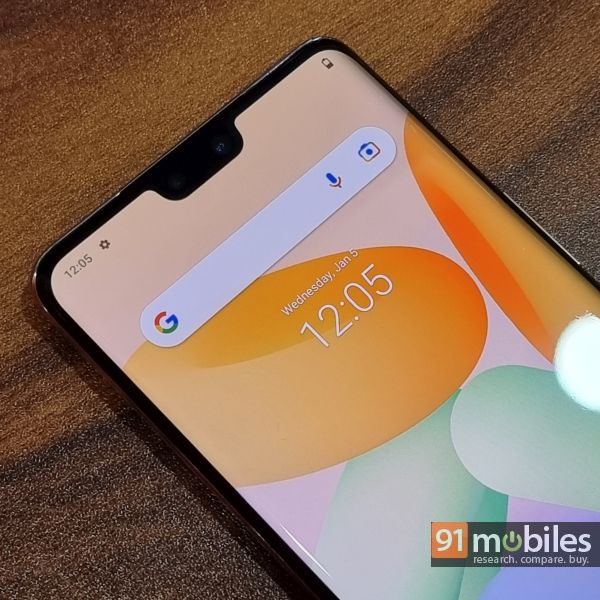 We do not often give selfie cameras a round of their own, but then it is not every day that we see a device with dual selfie cameras like the Vivo V23 Pro. The phone comes with a 50-megapixel main sensor and an 8-megapixel ultrawide one, delivers perhaps some of the best selfies we have seen from a phone, and comes with video quality that content creators will love. The Xiaomi 11T Pro’s 16-megapixel front-facing camera does take some very good selfies, but it gets totally outclassed by the twin shooters on the V23 Pro.

Round 8: Software and UI 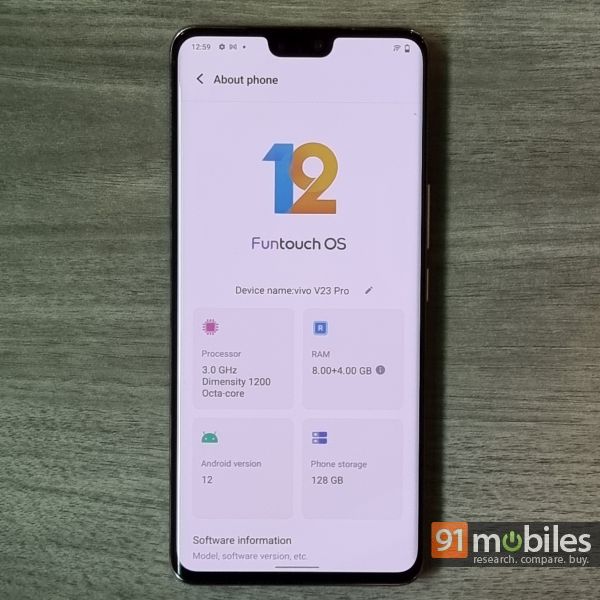 Both phones run with their own skins over Android – Xiaomi has the feature-rich MIUI, whereas Vivo has its FunTouch OS. In terms of ease of use, we tend to prefer MIUI, as FunTouch still can at times seem a little overwhelming. However, the fact that the V23 Pro is one of the few phones that comes with Android 12 out of the box, wins this round for the Vivo phone. The 11T Pro is still on Android 11. 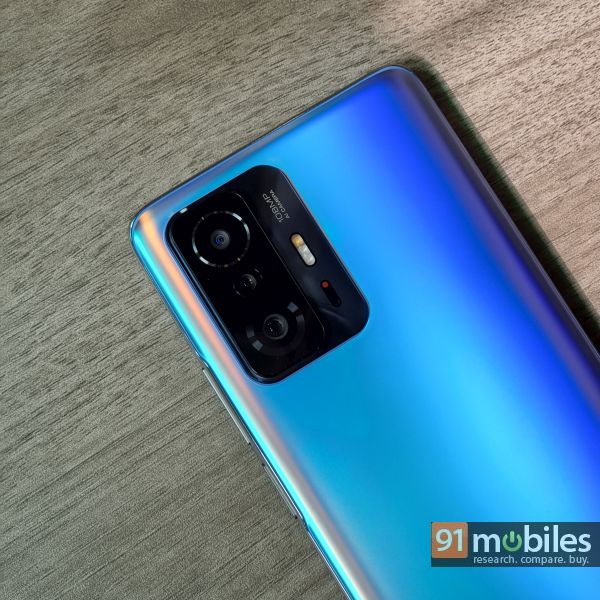 The Vivo V23 Pro comes with a 4,300mAh battery, which will see off about a day of normal use, if handled with some care. The Xiaomi 11T Pro comes with a much bigger 5,000mAh battery which comfortably goes past a day of usage. In terms of charging speed, there is no competition – the V23 Pro comes with a 44W charger that can charge the phone in an hour. That’s rather impressive, until you consider the 120W charger that accompanies the Xiaomi 11T Pro which charged it fully in about 20 minutes, thanks to Xiaomi’s HyperCharge. The 11T Pro wins the battle of both battery speed and stamina. 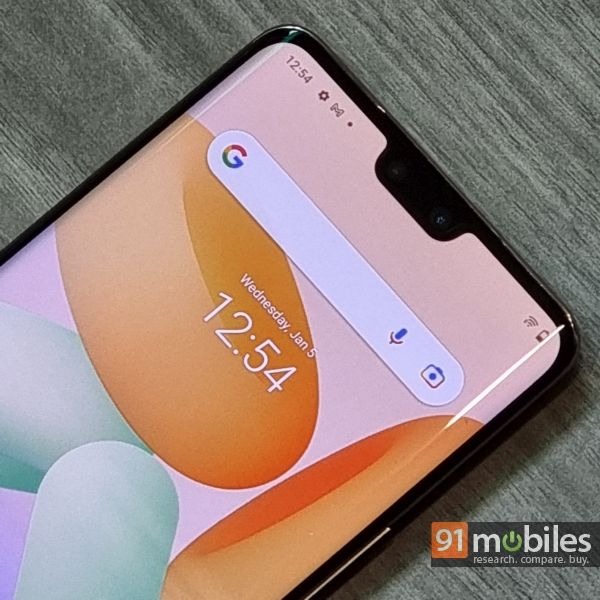 We think the V23 Pro has a slight edge over the Xiaomi 11T Pro in terms of handling, because of its more compact and lighter form factor. That said, the superior sound quality of the 11T Pro does make a difference and its bigger display provides more viewing area, and the 11T Pro also seems a little more snappy in multi-tasking (wonder if it is because of that processor). Call quality is about the same on both phones and both come with 5G support, but the fingerprint sensor on the side of the 11T Pro works much faster than the in-display one on the V23 Pro. We are calling this one a tie. 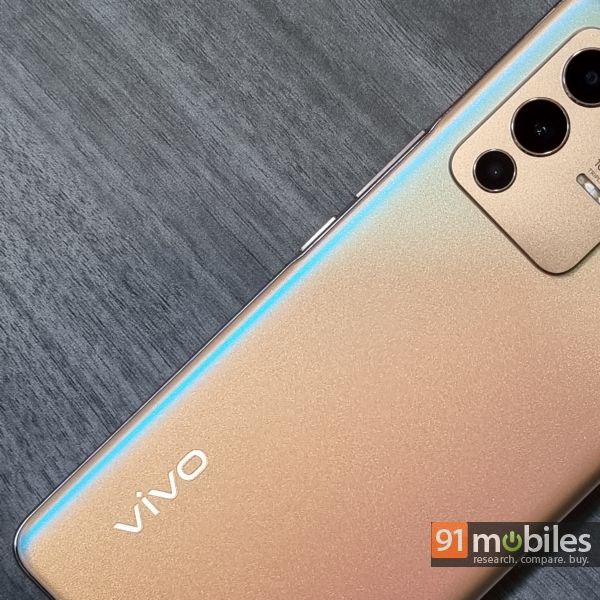 So, which Pro goes with you? 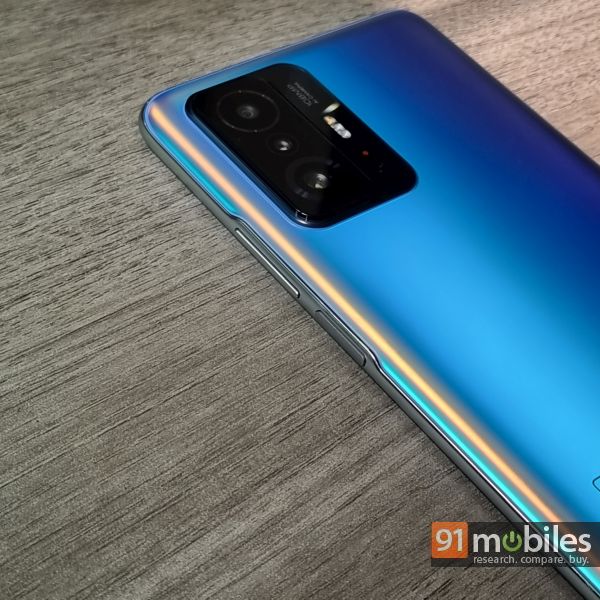 “Which phone you choose depends on your preferences” might sound like a cliche, but it is particularly true here. For these two phones are as different as chalk and cheese. Those who want a flauntable phone with a high style quotient and good cameras (especially a terrific selfie camera), would prefer the Vivo V23 Pro. On the other hand, those wanting a phone with a flagship-level processor and display and crazy fast charging would go for the Xiaomi 11T Pro. It is a pure clash between style and substance!