Xiaomi’s efforts in the laptop space seem to mimic the same signature strategy the brand has been known to employ in the smartphone segment, i.e., attempting to offer the max bang for the buck. Buying a new laptop however, is a more involved process than buying a phone — most people usually change laptops less frequently than phones, and one needs to weigh various aspects like usage requirements, budget etc carefully, before buying. Xiaomi’s latest, the Notebook Pro 120G, is a reasonably loaded device for its asking price and offers some noteworthy features as well. Is it the one you’re looking for? 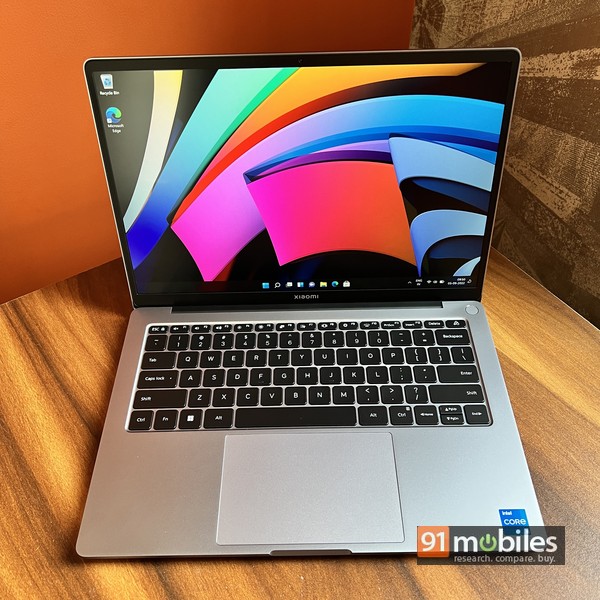 Xiaomi isn’t taking any chances and aims to impress right from the get-go by ensuring top-notch build quality. The Notebook Pro 120G comes clad in aluminium alloy and while the colourway is a drab grey, it’s well put together and solidly built. Subtle Xiaomi branding is present on the lid. You can’t expect to turn heads with it, but the overall feel is quite premium and bears an unmistakable resemblance to the Apple MacBook lineup. The device isn’t too heavy either, tipping the scales at 1.4kg.

Opening the lid reveals the 14-inch, 2.5K display with 16:10 aspect ratio. Notably, this is a 120Hz display, and that’s one of the headlining features of this laptop. It boasts DC Dimming and TUV Rheinland certification as well. The screen is nice — it offers good colours and gets reasonably bright, though the latter is something that could do with some improvement. HDR streaming is supported too, and thanks to its matte finish, the display isn’t too reflective. There are slim bezels visible on three sides. The top bezel sports the webcam, while the bottom bezel, which is wider, bears Xiaomi branding. 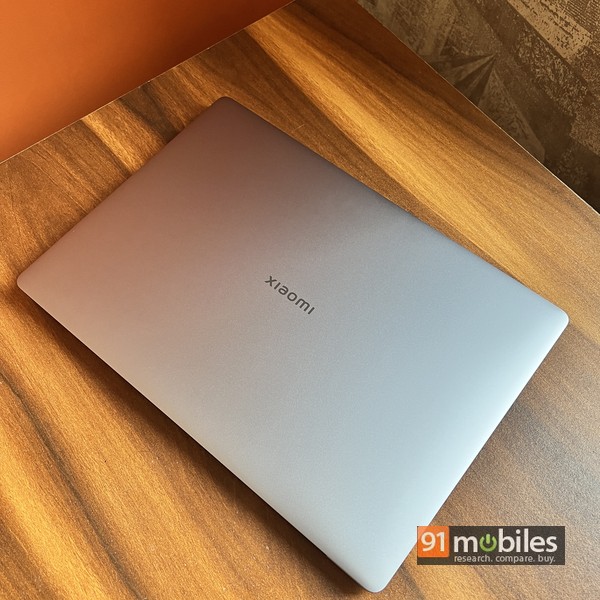 The minimalistic theme continues on to the ports too — there aren’t many. On the left, you get a USB Type-C port that supports Thunderbolt 4, along with an HDMI and an audio combo port. On the right, there’s another USB Type-C along with a Type-A. There’s no Ethernet port, and while that’s par for the course for many consumer-grade thin-and-lights these days, another Type-A and a card reader would’ve been nice to have. The provided assortment of ports is just about enough to cover the basics, but you might end up needing dongles or adapters if you have more than the usual peripherals / accessories to attach. 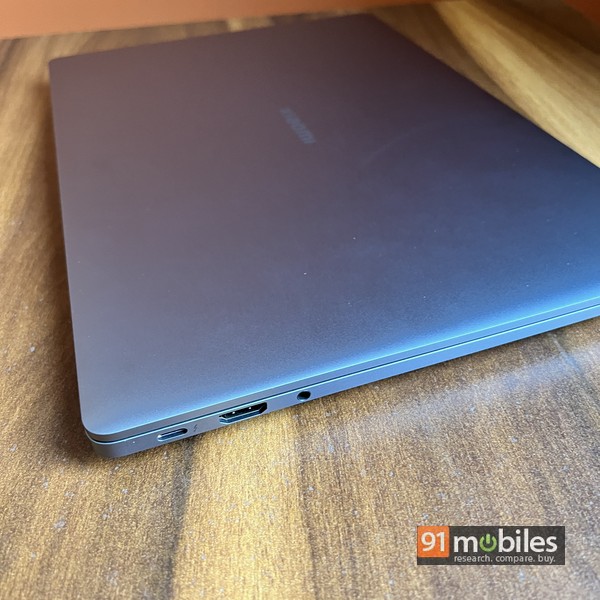 The base has the cooling vents, with stereo speakers placed on the curved sides. Slim rubber feet keep the laptop from slipping, also providing room for airflow and ensuring the sound doesn’t get muffled.

Moving on to the keyboard, it’s full-sized and spacious, with keys that offer ample travel. A three-stage backlight is available, and Xiaomi has even integrated a fingerprint scanner into the power button placed on the top right. Worth mentioning that the fingerprint scanner is quite fast and accurate. The rightmost button on the function key row is customisable, and you can assign it to any app or file using a software utility that comes preloaded. The trackpad is quite large, and thanks to Precision drivers, quite smooth and responsive as well… so no complaints there. 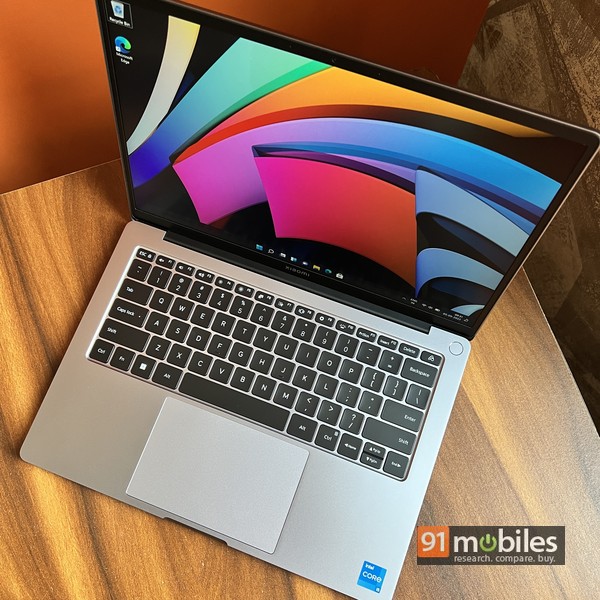 Windows 11 comes preloaded, as expected, and thankfully, there isn’t much bloatware. Apart from the aforementioned Macro key utility, the laptop comes with the usual stuff from Microsoft, MS Office, and DTS Audio configuration app, among a few others.

The notebook is powered by the 12th-gen Intel Core i5-12450H processor. This is part of Intel’s Alder Lake lineup, and can turbo up to 4.4GHz. Along for the ride are 16GB of LPDDR5 RAM and 512GB PCIe gen4 NVMe SSD. Dedicated graphics are present, thanks to the inclusion of Nvidia’s MX 550 GPU. Worth mentioning here that while this model I’m reviewing is the 120G, Xiaomi also sells another variant labelled the Xiaomi Notebook Pro 120 that has the exact specs, but ditches the dedicated graphics, letting Intel’s Iris Xe GPU handle this task. Performance is smooth for the most part and the laptop is able to handle typical productivity-based tasks well, juggling between apps and managing multiple Chrome tabs etc without breaking into a sweat. It can handle some light editing work and even gaming, especially eSports titles and older games, though newer, heavier games can run into issues. The laptop can heat up when it’s stressed… and that’s noticeable while running benchmarks etc. Suffice it to say that while it’s well suited for work and college use cases, the Xiaomi Notebook Pro 120G isn’t apt for serious editing or heavy gaming. 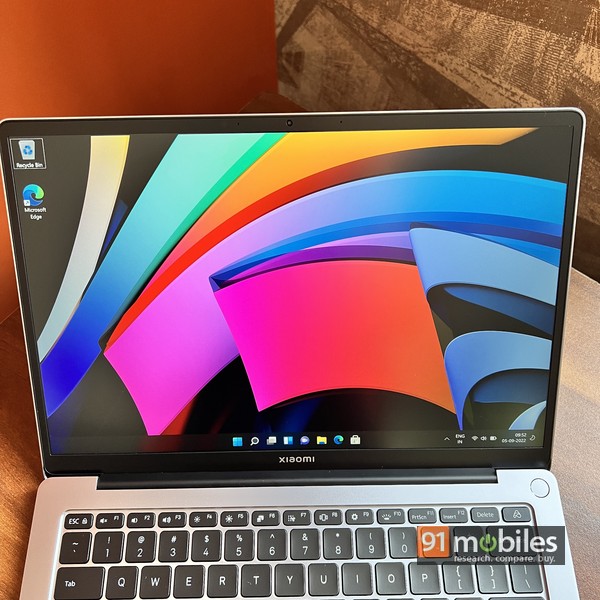 Next up, the battery life. It’s quite decent, especially considering the 120Hz display. With medium usage, you should be able to get about 5-6 hours on a single charge, though you do have the option of prolonging it by setting the screen refresh rate down to 60Hz. The laptop comes bundled with a 100W Type-C charger, and that’s another feather in its cap. It can charge up to 50 percent levels in a little over half an hour, and takes about a couple of hours to charge fully. The downward-firing speakers and 720p webcam do their jobs, while the fingerprint scanner works quickly and accurately in terms of authentication and giving you access to the system. 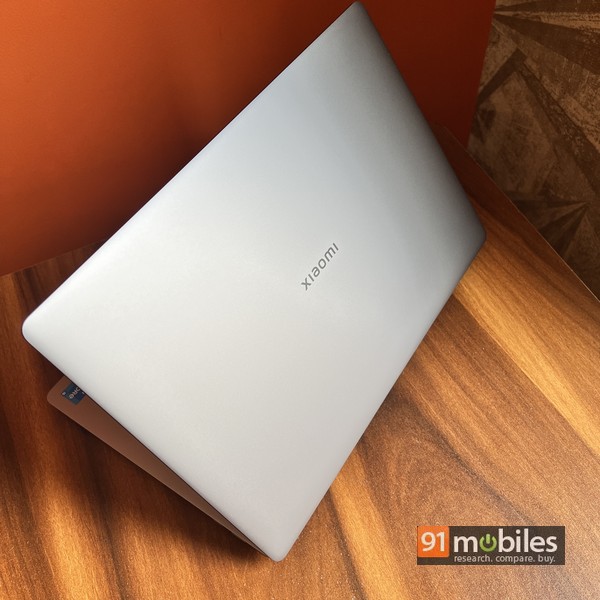 The Xiaomi Notebook Pro 120G is priced at Rs 74,999, and for its asking price, brings quite a bit to the table. It has a few niggles like thermal management and screen brightness as well, but on the positive side, stands out in many other aspects. Its classy design, good colour reproduction, ergonomic keyboard, decent performance and 100W charging are some of the advantages. The laptop works well as a daily workhorse for office and college use, and the dedicated Nvidia MX 550 graphics combined with the 120Hz, colour-accurate screen lend it some cred as a laptop that can serve up basic gaming, colour correction and light editing work as well. The Notebook Pro 120 model that bears the same specs except for the dedicated graphics is cheaper by Rs 5k, but I think that difference is marginal at this price range, so the 120G does come across as a compelling option.