I never miss an opportunity to make fun of my colleague Ankit Chawla whenever he pulls out his AirPods (review) to listen to music. Don’t get me wrong, I don’t dislike the AirPods. In fact, if you’re an iPhone user, you’ll be hard-pressed to find a pair of more functional earphones to compliment your device. But, for Android peasants such as myself, I feel that there are plenty of better-sounding alternatives to Apple’s truly wireless earphones. Case in point, the Anker Soundcore Liberty Air, which was recently announced in India at a mouth-watering price point. But, in the increasingly congested truly-wireless space, does the pair stand out? That’s what I’m here to find out.

Anker is paying Apple some serious compliments with its latest product because, you know, imitation is the sincerest form of flattery. Jokes aside, the Anker Soundcore Liberty Air looks eerily similar to Apple’s offering and several of my colleagues dubbed the pair as AirPods knockoffs. That said, the earphones improve upon one major aspect which made me shun the AirPods for ever so long – the presence of rubberised ear tips. You see, unlike Apple’s offering, the Liberty Air forms a comfortable seal in the ear which isn’t just crucial to improving the sound quality, but also makes the earbuds stick in my ear. Therefore, I didn’t have to worry about losing the Liberty Air as much as I did when I was testing the AirPods. 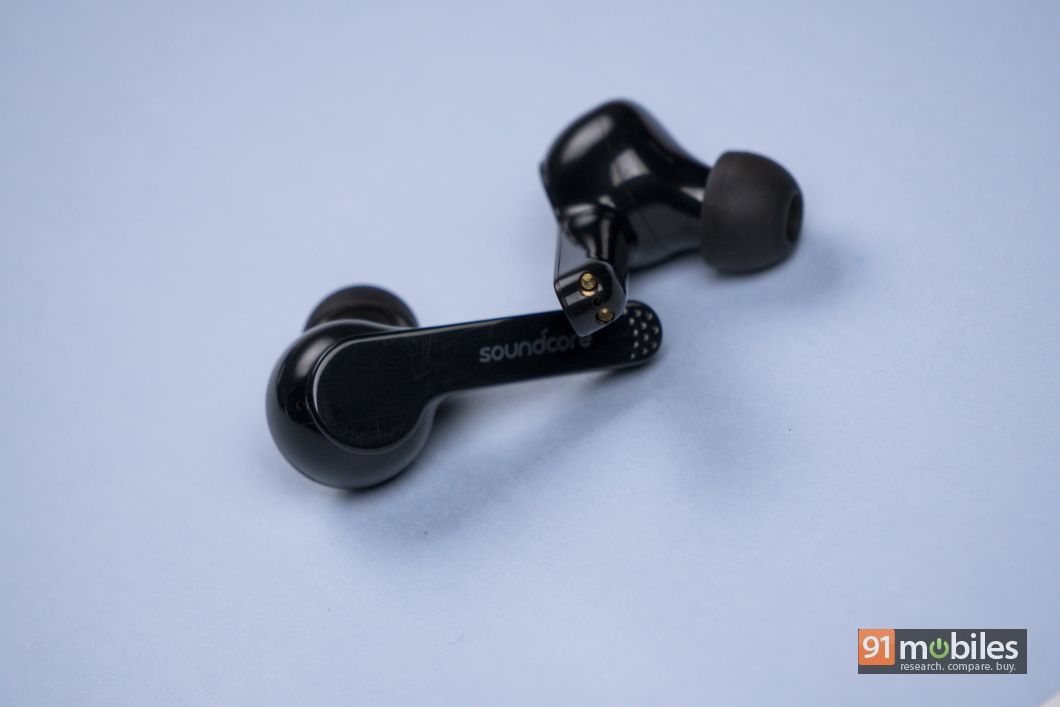 On the flip side, I wasn’t a fan of the Liberty Air’s plasticky build, and more so the IEM’s glossy finish. In fact, after using the earphones for just a few hours, the unit was smudge-ridden, making it appear cheaper than its MRP would otherwise suggest. Furthermore, unlike truly wireless offerings from Samsung or Jabra, the Liberty Air features an elongated stem, akin to Apple’s AirPods which I didn’t quite fancy. However, I will admit that the call quality was much better on the Liberty Air since the microphones were positioned much closer to my mouth. 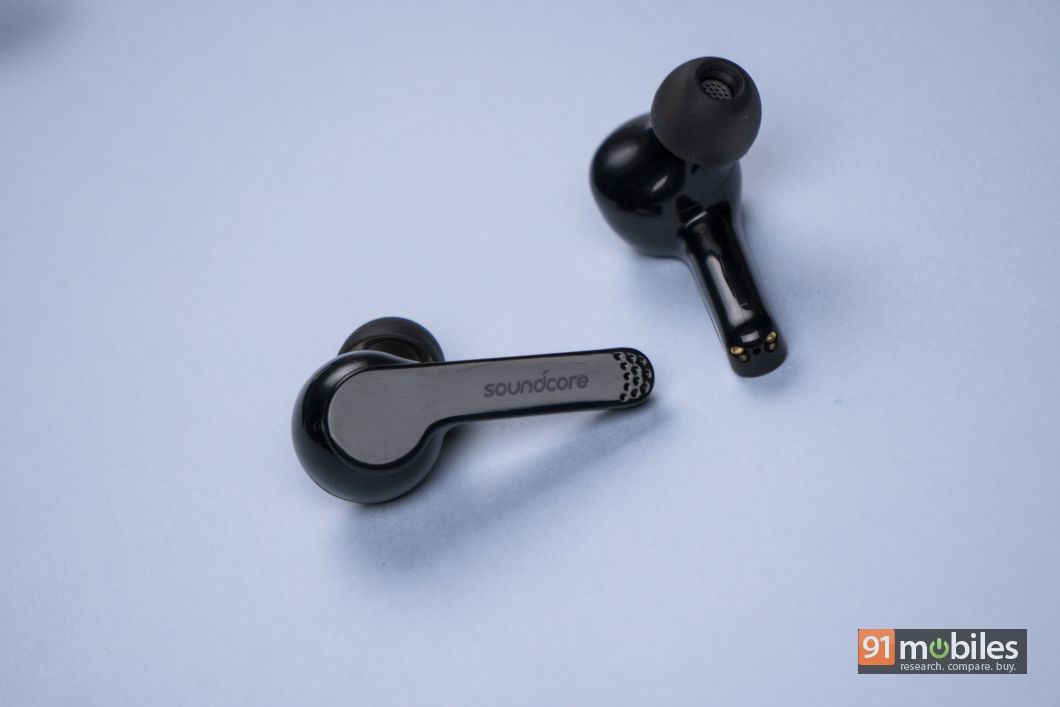 Adding to the list of pros, the Liberty Air comes with a touch-sensitive surface at the top of each earbud, which can be used to toggle various functions. The control scheme requires a slight learning curve, but over the duration of one week, I was able to get a hang of it. So, if you want to skip to the next track, you’ll have to hold down the touch surface on the right earbud for two seconds. Similarly, pressing down on the left earphone for two seconds will take you back a track. Double-tapping the touch surface on the right earbud will play or pause the music playback and it will also answer or reject an incoming call. Lastly, long-pressing the left earbud for two seconds will invoke the Google Assistant on your smartphone.

The only downside of the Liberty Air’s touch-based controls is that occasionally, my gesture wouldn’t register and I would end up turning the earphones off. That said, I encountered this issue only a handful of times during the entire review period. 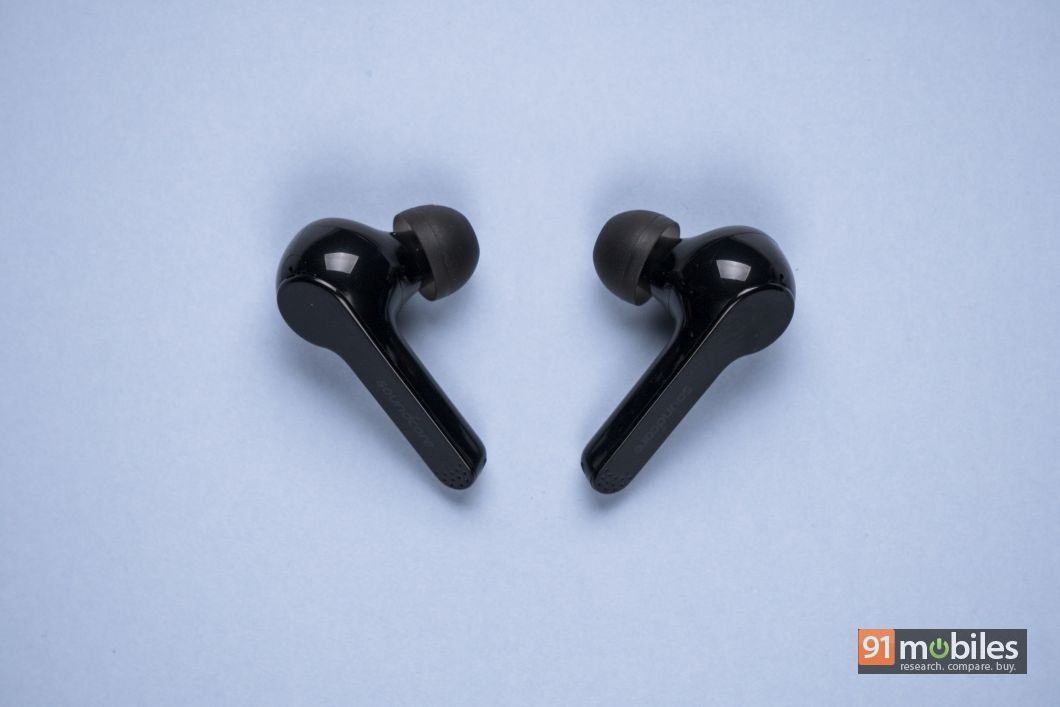 One of the biggest benefits of going cord-free is that you won’t be bogged down with tangled cables or an irritating neckband when working out. On that note, the Liberty Air has all but replaced the 1More Triple Driver BT (review) as my gym earphones of choice. Moreover, thanks to the earphone’s IPX5 rating, I didn’t flinch once whilst wearing them in some of my most sweaty and vigorous workouts. 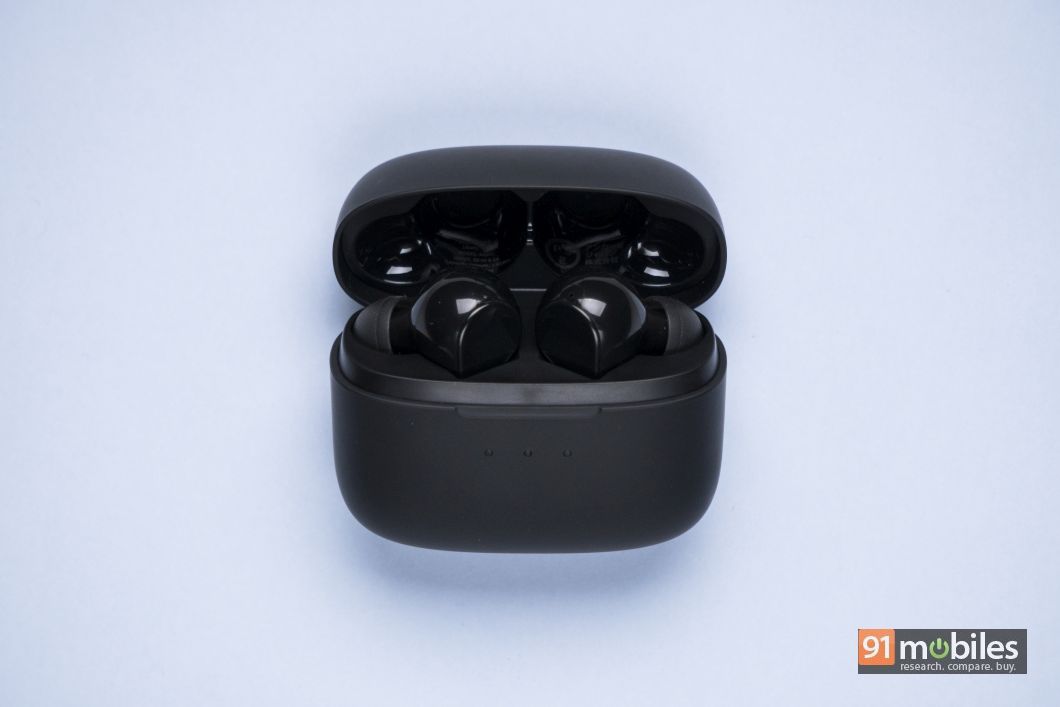 As is customary with all truly wireless earphones, the Anker Soundcore Liberty Air too ships with a carrying case which doubles up as a battery bank. The case itself is quite compact, and it sports rounded corners and chamfered edges. Therefore, it won’t bother you when it’s in your pockets. Moreover, I quite like the matte finish of the case too, and I wish Anker would’ve used the same paint job on the earbuds themselves. My only gripe with the design of the case is that it doesn’t ship with a USB Type-C port for charging and instead features a micro-USB port, which at this point, feels archaic. 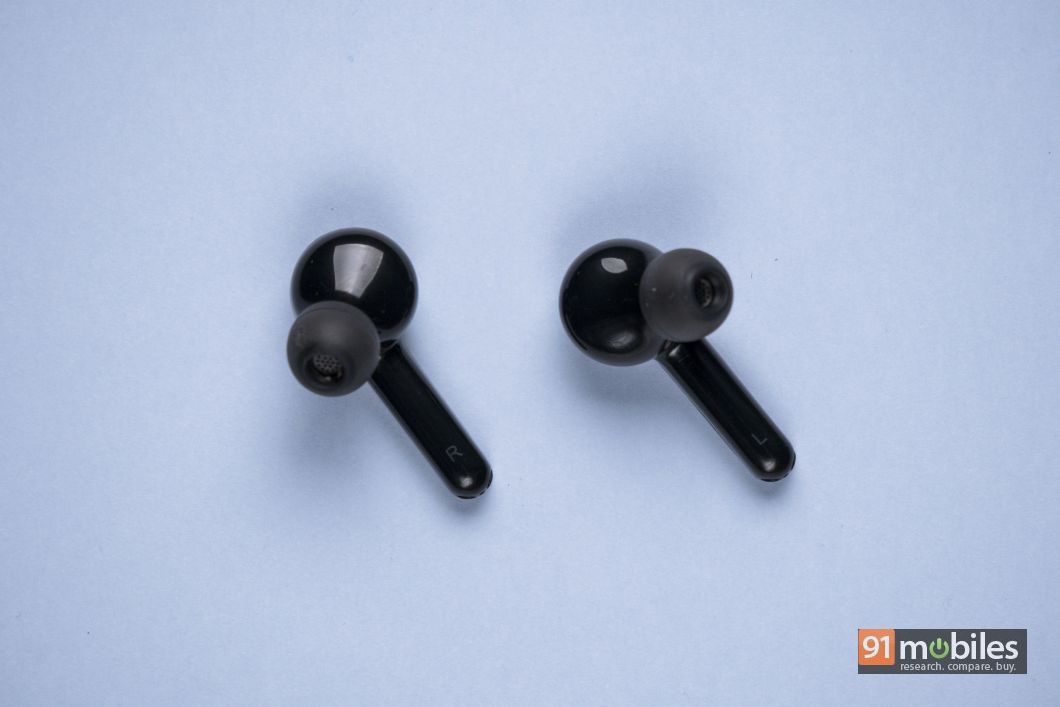 If you’re worried about the earphone’s extended stem poking your cheeks, then fret not as the Liberty Air are supremely comfortable to wear. In fact, once you’ve narrowed down the right sized ear tips for your ear canal, you’ll all but forget that the earphones are even in your ears. Unfortunately, since the earbuds protrude outwards, you won’t be able to listen to music with your head pressing against a pillow at night. Barring that, you’ll be hard-pressed to find any issues with the fit or the comfort offered by the pair.

The Anker Soundcore Liberty Air sounds terrific and for its marked price, I honestly couldn’t have asked for more. The unit packs a respectful punch in the low end which makes the beat pop, while allowing other instruments a chance to shine too. I particularly enjoyed listening to hip hop songs like Post Malone’s Wow and Eminem’s latest album on the pair, as the bass didn’t interfere with the vocals and I could make out every word in a fast-paced rap song. Turn the page over to James Blake’s Limit to your love and you’ll find a similar result. The beat drop at the 55th second will easily rumble your ears, but it didn’t affect the singer’s melodious voice in any manner.

The mid-range is reciprocated just as brilliantly too. Acoustic blues sound phenomenal on the Liberty Air, with vocals shining front and centre. In Calum Scott’s Dancing on my own, the notes from the piano sounded blissful and deep, and the pair did a fantastic job of reproducing the highs and the lows in the singer’s voice too.

Quite frankly, I am yet to come across a pair of affordable Bluetooth earphones which do justice to the highs. The Anker Soundcore Liberty Air does reasonably well, but I doubt metal-heads will enjoy listening to their favourite artists on the pair. With the volume cranked up high, power chords and riffs sound particularly muddy, and the pair’s poor imaging makes listening to chaotic rock ballads nothing short of a nightmare. 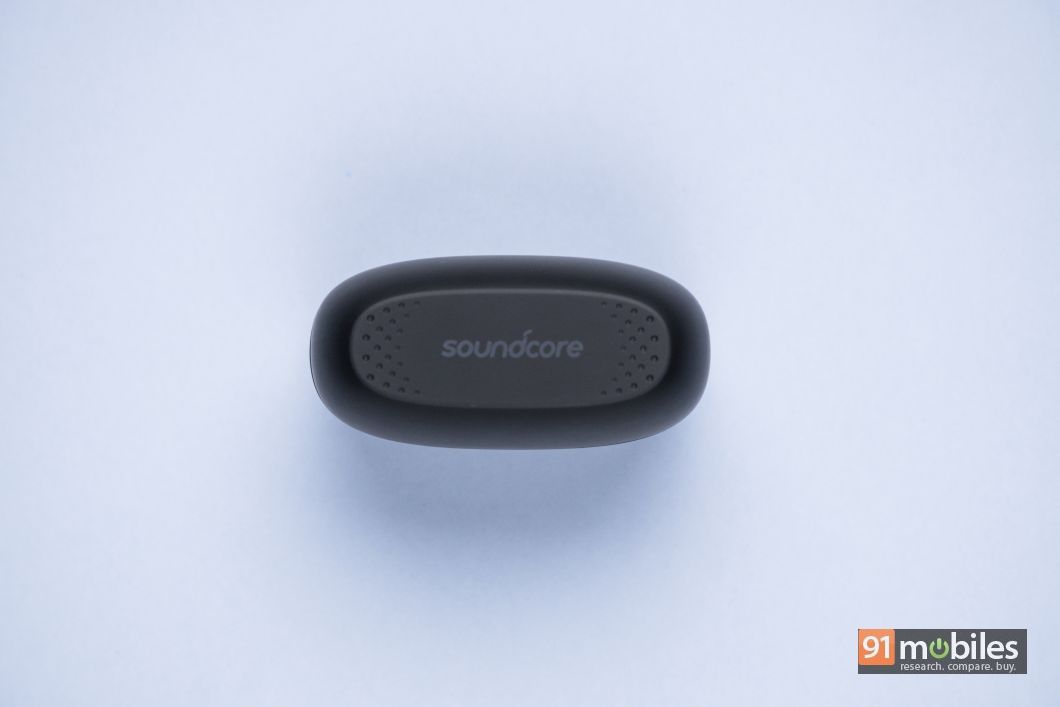 The fact that the Anker Soundcore Liberty Air connects to compatible devices over Bluetooth 5.0, instantly piqued my interest. And, after testing the earphones for over a week, I can confidently say that the unit offers a rock-solid Bluetooth connection which rarely ever falters. What’s more, you can even connect two devices simultaneously to the pair, however, switching between them requires you to manually disconnect the Liberty Air from one of the devices. All said and done, I was quite satisfied with the earphone’s reliability. 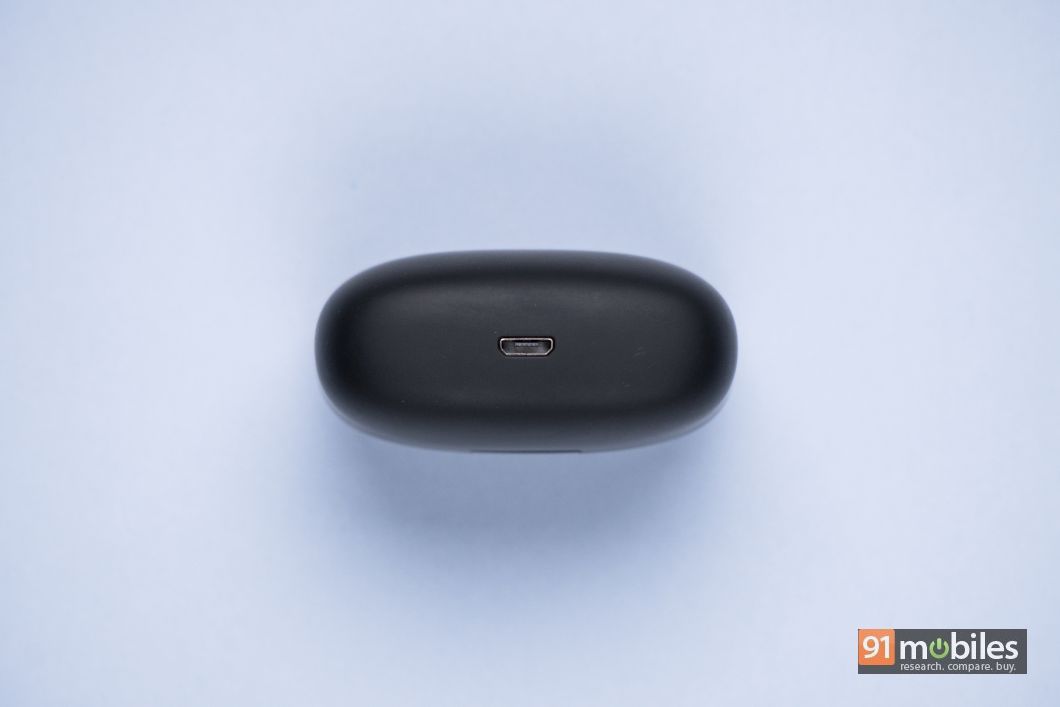 As for the battery life, the Anker Soundcore Liberty Air lasted me a little over four hours off a single charge. Moreover, the bundled case allowed me to charge the earphones twice approximately, which is great.

So, should you buy the Anker Soundcore Liberty Air? Well, for the unit’s asking price of Rs 7,999, I don’t see why not. The pair offers a robust Bluetooth connection, sounds good, features a solid battery life and most importantly, undercuts the competition significantly. Now, there are things Anker could’ve done better, such as furnishing the case with a USB Type-C port and fine-tuning the drivers to make songs from the rock / metal genre sound better. But, everything considered, I whole-heartedly recommend buyers to go for the Soundcore Liberty Air.