Apple’s first-gen AirPods were among the most ubiquitous and recognisable TWS earphones in the market, and for good reason. The pair offered seamless connectivity for iPhone users along with a likeable open-fit design and decent sound quality. Unsurprisingly, the first-gen model was an instant hit and the company struck gold with the pair. More importantly, following Apple’s suit, a slew of brands jumped onboard the TWS bandwagon which helped the segment go mainstream.

Fast-forward to 2021 and Apple still enjoys the biggest share of the TWS segment. However, unlike yesteryears, the company now faces stiff competition from other hearable-focussed brands like Samsung, OnePlus, etc. Can then, the brand’s latest AirPods 3 stand out? Let’s find out in this review.

Apple’s latest AirPods take a page from the AirPods Pro in the design department. The earphones, in particular, have been stylised to resemble their pricier ‘Prosumer’ siblings and the pair features shortened, curvy stems with tiny, contoured indents. What’s more, compared to the second-gen Apple AirPods, the charging case for the AirPods 3 looks a lot like what you’d get with the AirPods Pro too, only smaller. With that said, the case’s opulent in-hand feel, and the satisfactory snap whenever you open and close the lid is still congruent with older models, which is great. 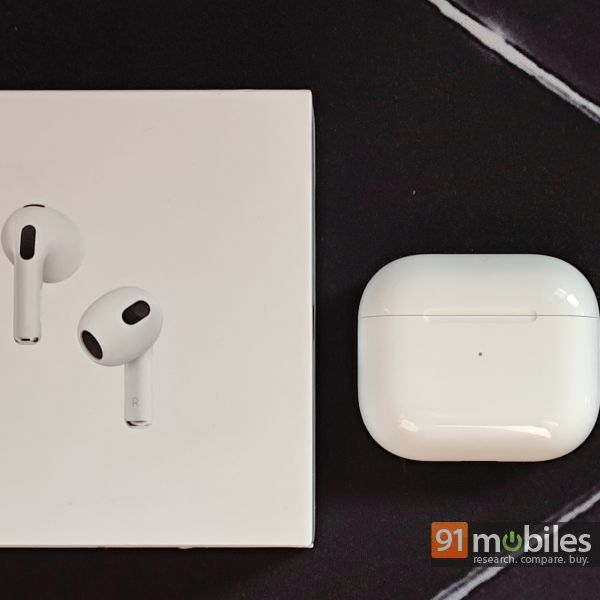 Unfortunately, that’s more than I can say about the pair’s in-ear fit and unlike the AirPods Pro, the AirPods 3 employ an open, semi in-ear fit design that might not be everyone’s cup of tea. In fact, during my stint with the earphones, I had to reposition them in my ears time and again to ensure the buds didn’t fall off. Naturally, I didn’t make the most of the earphone’s IPX4 rating either, as the pair would refuse to stay put in my ears when I was working out a sweat in the gym. 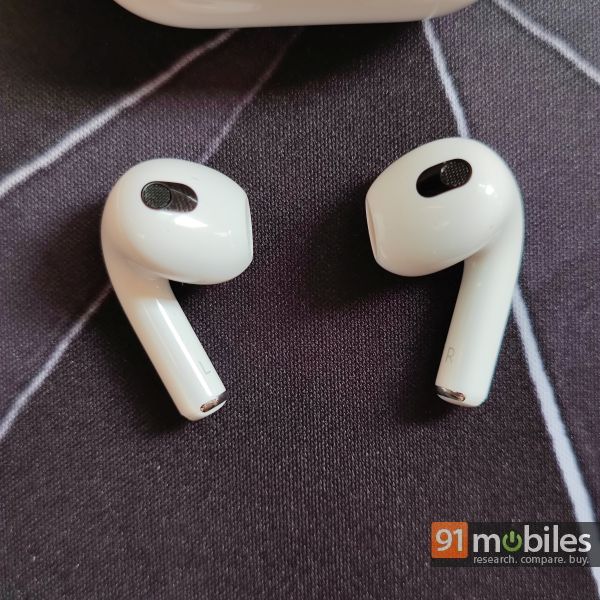 While I didn’t fancy the AirPods 3’s in-ear fit, that’s not to say that you won’t either. In fact, a lot of folks prefer dangling, semi in-ear type earphones as the ones with silicone tips can, at times, bite your ear or cause listening fatigue. On the flip side, the AirPods 3 don’t isolate environmental noise all that well. Consequently, you’ll almost always hear whatever is going on in your surroundings, even if you are listening to music at high volume levels. Unsurprisingly, the AirPods 3 leak sound too so, you might want to be wary of your listening habits in a public area. 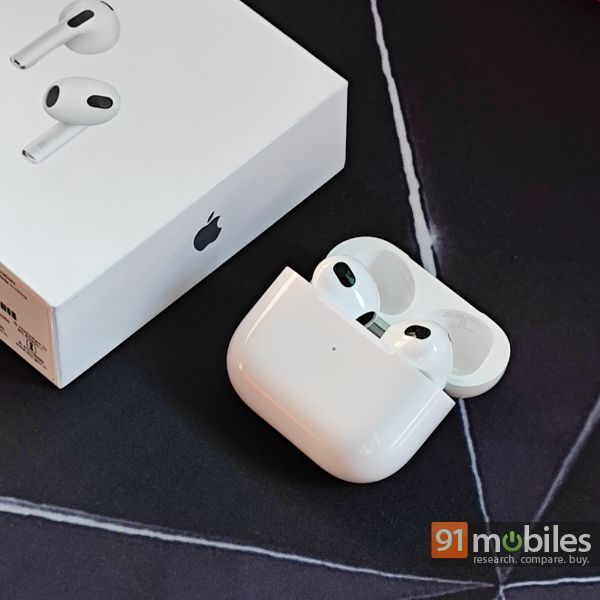 On the bright side, the earphones ship with ‘pinch’ controls, the likes of which you might’ve seen on the AirPods Pro or the OnePlus Buds Pro. In a nutshell, you can squeeze the stems of either earbud to toggle a command, say, to go forward or backwards a track or to answer an incoming call. During my testing, the pinch controls worked flawlessly albeit at times, unanchored the earbuds slightly from my ears. Thankfully, you can use Siri to control your music playback too – it is slightly disorienting, as the last thing you’d want to hear are AI callouts whilst listening to your favourite music. But, it did keep me from readjusting the earpieces time and again, so you win some and lose some here. 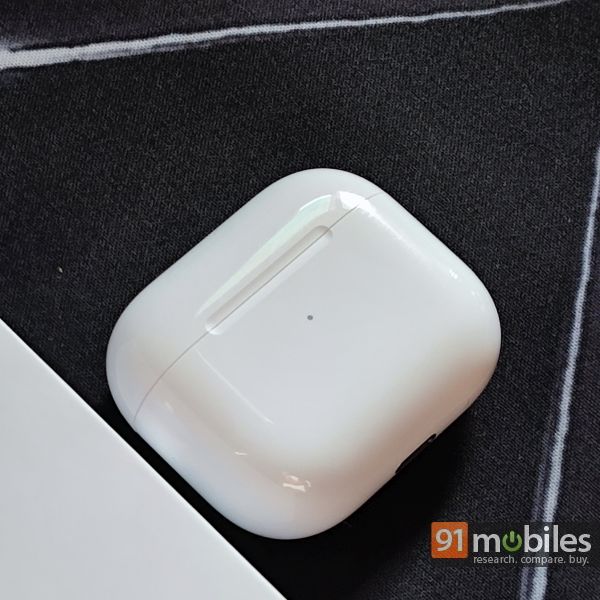 It goes without saying that AirPods 3 builds upon the company’s fantastic connectivity chops too. To that note, the AirPods 3 will automatically show a pairing prompt on your iPhone the second you open the case’s lid. What’s more, you can seamlessly route audio from different Apple devices to your AirPods 3 without so much as pushing a button. In fact, the earphones will recognise all the devices in your Apple ecosystem and then relay audio from whichever device you’re using at that point in time. Interestingly, Apple has also incorporated a skin detection sensor that automatically pauses the music playback whenever you take the earbuds out of your ears. The sensor worked well during my testing, so no complaints here.

So, how do the AirPods 3 sound? Well, given the semi in-ear fit design of the earpieces, you’d be wise to assume that the AirPods 3’s low-end output leaves a bit to be desired. Now, credit where credit’s due, the earphones offer a punchy bass output with marginal decay. However, the slam from the beats isn’t as tight or impactful as I’d like it to be. As an example, in James Blake’s Limit to your love, the beat drop at around the 55th-second mark sounds hollow and the beats just don’t offer the same depth or weight as you’d come to experience when listening to the song via the OnePlus Buds Pro (review). To cut a long story short, if you were in the market for a pair of TWS that offer a thunderous slam in the low-end, or good bass extension, then you might be a bit disappointed with the AirPods 3’s sound signature. 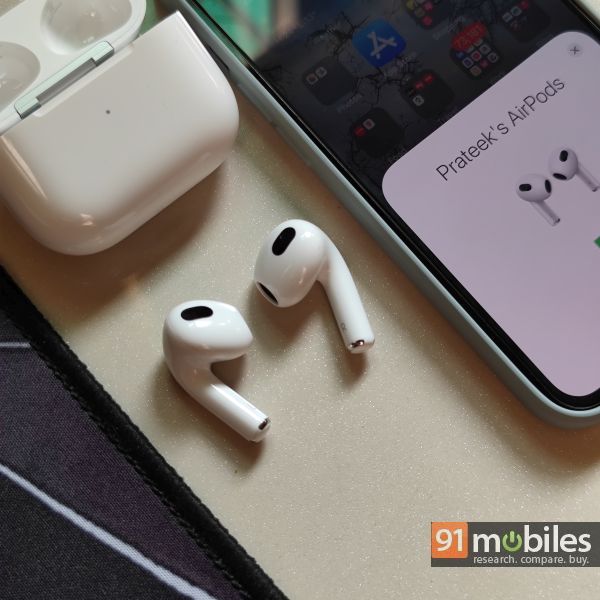 On the flip side, the AirPods 3’s spacious sound stage is utterly captivating, which can, in parts, be accredited to the unit’s open-ear design as well. Consequently, you’ll never feel as if the sound is being relayed to your ears in a single file. On the contrary, the sound stage is wide enough for you to pinpoint the different instruments at play. What’s more, thanks to support for spatial audio, tracks encoded in, say, Dolby Atmos sound phenomenal. 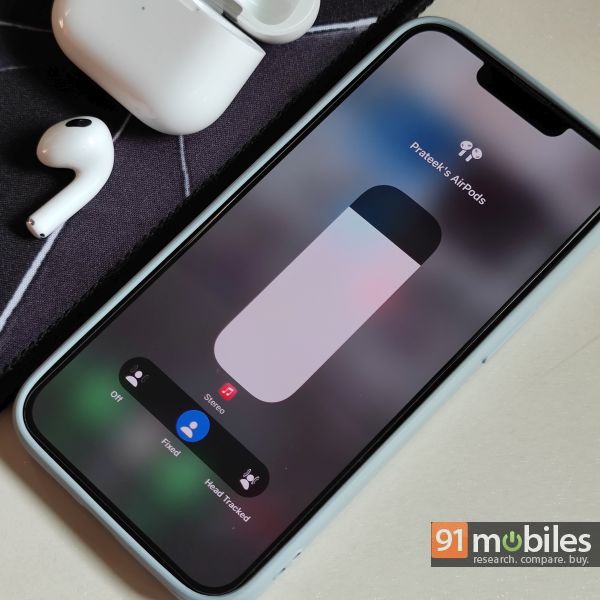 To that note, Apple upscales most tracks to spatial audio, but I’ll recommend you only toggle the feature on for songs or media encoded in multiple channels. Else, you might run into instances where the vocals or the tonality of the instruments in a song feel amiss. To enable the feature, all you have to do is swipe down from the control centre and long-press the volume tab. From there, you should get an option to turn on spatial audio. Unsurprisingly, Android users will not be able to make use of this feature. 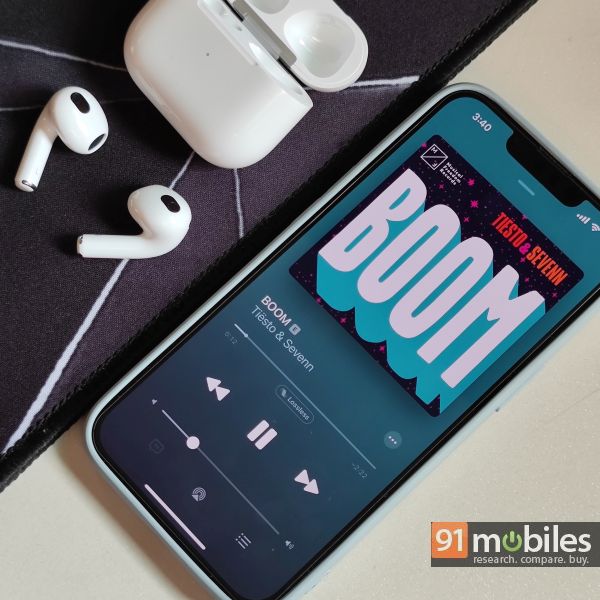 Listening to Boom by Tiesto, I was taken aback by how well the beats traversed around my head. What’s more, you can enable head-tracking spatial audio to create an even more immersive listening experience. In doing so, tilting or moving your head will also rejig the way you hear the sound. Truth be told, you’ll have to experience this feature to truly understand its potential. Moving on, the highs don’t offer the same bite as you’d get out of competing TWS earphones like the Samsung Galaxy Buds Pro or the OPPO Enco X. The strums from the electric guitar in Slipknot’s Unsainted, for instance, sound a tad dull. That said, the AirPods 3’s imaging is fantastic and despite listening to tunes at rather high volume levels, the tracks didn’t get muddy or illegible.

The same goes for the unit’s battery backup too and I managed to get around five hours of playback from the buds off a single charge. You should know that the bundled case adds around 30 more hours of juice, which is great. Thankfully, the AirPods 3 live up to the company’s reputation and offer excellent mics too. So much so, I can’t remember if I took a call without the AirPods 3 in my ears all of last week.

The AirPods 3 cost a pretty penny and retail for Rs 18,500 in the Indian market. It goes without saying that you can get your hands on much better sounding TWS buds for less, including but not limited to the Samsung Galaxy Buds Pro (review), the OnePlus Buds Pro and the OPPO Enco X (review). That said, unlike the aforementioned devices, the AirPods 3 offer unmatched connectivity and are a godsend for anyone with a handful of Apple devices. Furthermore, it’s hard to overlook the unit’s support for spatial audio too, which adds a level of immersion that cannot be reciprocated by non-Apple TWS offerings – at least, not yet. That said, the AirPods Pro often retail for around Rs 20K and for their discounted price, offer much better acoustics, along with a more secure in-ear fit. In fact, as of writing this review, the AirPods Pro are up for grabs for just Rs 21K on various e-commerce portals like Croma and Reliance Digital. Between the two, you should opt for the AirPods 3 if you have a strict budget and don’t care for the pair’s semi in-ear design. However, if you can stretch your budget by a couple thousand bucks, then you’ll get much better value out of the AirPods Pro. Regardless, the AirPods 3, while not perfect, is still a sound choice for buyers who are intertwined in Apple’s ecosystem.