Brand Samsung has been pretty consistent with its efforts in the burgeoning TWS space, mainly aiming at the premium side of the spectrum. Galaxy Buds (review), Galaxy Buds+, and Galaxy Buds Live (review) are the models we have seen from the brand in the past, and alongside the launch of the new S21 series of smartphone flagships, the latest addition to the portfolio comes in the form of the Galaxy Buds Pro. Just like the Buds Live, the Galaxy Buds Pro also feature active noise cancellation (ANC). Samsung has added new features with each new iteration, and the Buds Pro come with some interesting new capabilities too. Well, I have been using the Buds Pro for a few weeks now, so let me share how my experience has been. 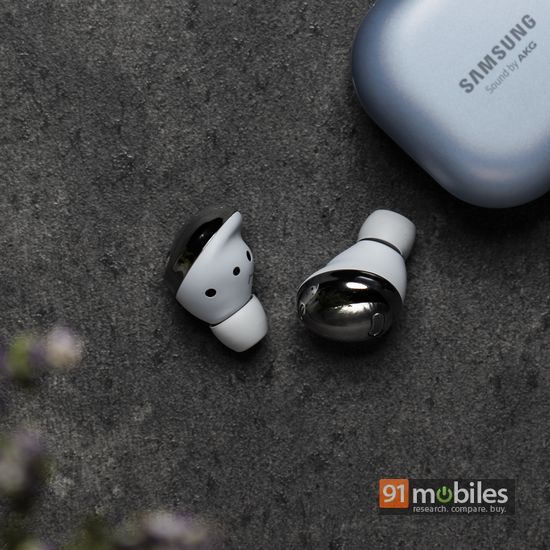 The Galaxy Buds Pro come in black, silver, and violet, and I have the silver model. The case, which is quite compact, has a squarish shape and rocks a matte finish that both looks and feels good. You do need both hands to flip the lid open, since a fair bit of dexterity is needed if you try to do so with just a single hand. The case has cavities inside for the two buds, along with an LED that indicates charging status. Another LED can be seen outside in the front, while the back has a Type-C port at the back for juicing up. 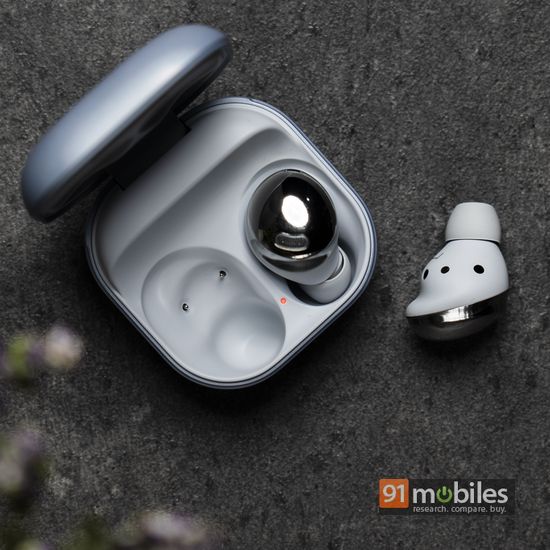 The buds feature a rounded exterior, without any stems. There’s a glossy finish on top which is much too shiny for my taste, at least on the silver version I have. The buds also feature touch controls, a very noticeable mesh with a mic inside that helps minimises wind noise, two more mics, a couple of pogo pins that enable charging, sensors, and a smaller mesh towards the inside. 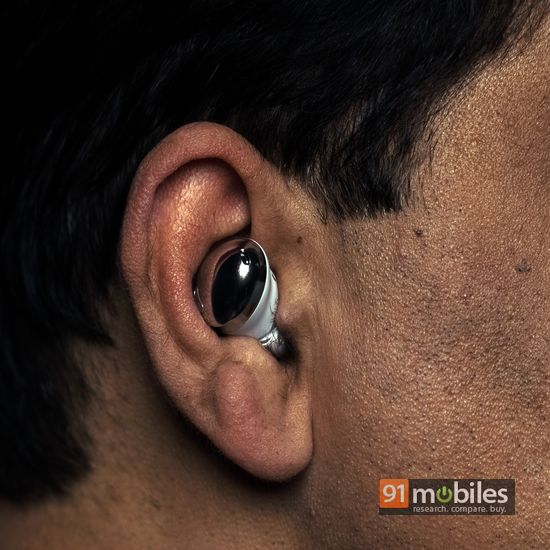 Coming to the fit, I have to say that the Buds Pro have to be one of the most comfortable pair of TWS earphones I’ve ever used. The fit is extremely good, and the buds passed the head shake test with flying colours too. There are differently-sized rubber tips in the box for you to find the optimum fit, which is essential from an ANC point of view. What’s more, there’s no clogged-up feeling in the ears either, something which is usually experienced with ANC earphones. The Buds Pro carry IPX7 rating, so you should be okay if you expose them to sweat or light rain while out and about.

Right at the outset, it’s important to mention that the Galaxy Buds Pro work best with a Samsung smartphone. They can be used with other Android phones and even iPhones, but you won’t be able to use some of the special features Samsung has added. You’d need the Galaxy Wearable app to control the settings, which isn’t available for iOS, unfortunately. As far as the touch controls are concerned, you can tap the glossy part of the earbuds once to play/pause music, while a double-tap switches to the next track, or answers/ends a call. A triple tap moves to the previous track in your list, while a long press switches between ANC and ambient modes. The long press can be customised via the companion app. In my testing, I tried the Buds Pro with a Galaxy S21+, an iPhone 12 Pro Max and a MacBook Pro, and I’m glad to report that the connection remained stable throughout and never dropped even once. 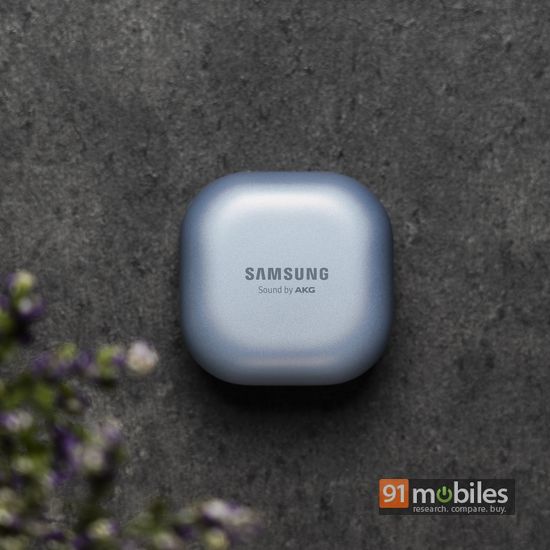 The Buds Pro feature 11mm woofers and 6.5mm tweeters, and as far as sound codecs are concerned, there’s support for AAC and Samsung Scalable Codec. There’s no aptX though. The Galaxy Wearable app will give you options to turn off ANC, or switch to an Ambient sound mode that lets in audio for when you want to be better aware of your surroundings, like when walking on the street or at an airport, for example. You also get to choose one from various equaliser options available. Among the new features, there’s a very nifty voice detect mode that automatically reduces volume and switches to ambient mode when you talk, and then goes back to the previous settings when you stop speaking. It’s actually extremely useful. And talking about some key features that are specific to Samsung devices, there’s 360-degree audio, Bixby support (but no Google Assistant) and automatic switching between a Samsung phone and a tablet. Coming to the all-important audio quality, the Galaxy Buds Pro offer a fairly neutral sound signature with a slight emphasis on the highs. Worth mentioning that the treble doesn’t sound harsh. It has a bite to it and is very sparkly but it won’t make you want to reduce the volume or switch to a different song. For instance, in a song like ‘I can hold a grudge like nobody’s business’ by Adam Jensen, you’ll notice that the strums of the guitar are exactly how they should be and, that unlike with other TWS, the Galaxy Buds Pro don’t subdue the highs in favour of the vocals, or the kick drums. Also, that’s not to say that all you get from the Buds Pro is good treble. The low-end, for instance, is extremely tight and the beats have a very concise yet satisfying slam. The bass output isn’t boom-y in the slightest and while the sub-bass frequencies in songs like ‘You want it darker’ by Leonord Cohen do feel a little amiss, on the whole, EDM lovers will also enjoy the bass output of the Buds Pro. While they don’t offer voluminous, thunderous, roaring bass, the low-end is still extremely satisfying because it has minimal decay and extremely tight response. 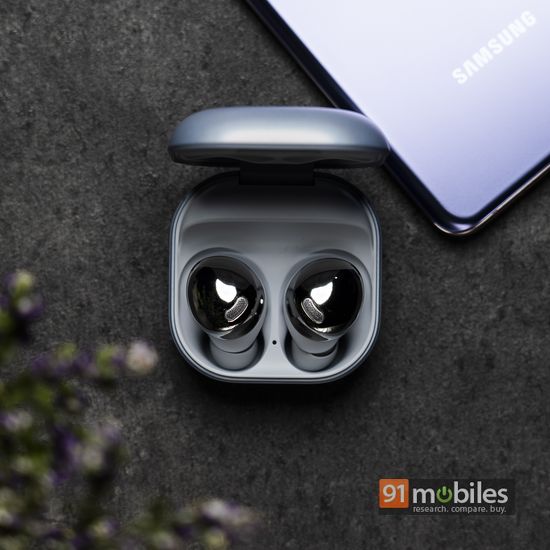 And, the Buds Pro are quite versatile otherwise also. I used them extensively for work calls (Google Meets, Zoom, Microsoft Teams et all), on both phone as well as laptop. Not only were they comfortable (some of those calls ran up to a couple of hours), the call quality, both incoming as well as outgoing, was extremely good.

Coming to the ANC, I can’t say that the Galaxy Buds Pro can drown out all the noise around you, but they are perfectly fine for muffling sounds like the engine hum of a car or a bus, or the typical noises you’d hear in an active household. There are two ANC settings available in the Galaxy Wearable app for you to customise the audio as per your liking. You can expect a little under 5 hours of battery life with ANC on, and the case should be good for another three charges at least. That’s when you’d need to use the Type-C port at the back of the case, and you also have the option of charging it wirelessly.

Now if you’re an iPhone user, the Samsung Galaxy Buds Pro aren’t for you, and you should possibly consider the AirPods Pro or a Jabra Elite 85T. For those on a tighter budget, the OPPO Enco X (review) are a great buy. However, for their asking price of Rs 15,990, the Galaxy Buds Pro are a solid purchase if you use an Android phone, and even more so if you own a Samsung handset, and are looking for a comfortable pair of TWS earbuds with great, balanced audio quality.