It seems Apple has been slowly trying to inject “affordable” devices into its premium portfolio. Earlier this year, we got the iPhone SE (review), which is a more economical version of the iPhone 11. Now, we have the Apple Watch SE, which is supposed to be a more economical version of the flagship Series 6. But “affordable” is a relative term here. Yes, the Apple Watch SE costs $279 in the US, which comes to around Rs 20,000. But in India, the same model costs around Rs 30,000 and upwards thanks to heavy taxes and duties. So, it’s not really the most affordable Apple Watch in the market.

The Apple Watch SE is an interesting device. It is very similar in design and features as Series 5 without having to pay as much. It comes in 40mm and 44mm sizes, an OLED display with slim bezels, watchOS 7 out of the box, and is powered by the S5 chipset. I spent over a week with the all-new Apple Watch SE to find out whether the product makes sense for consumers in India, especially for Series 3 owners looking to upgrade. Here’s what I found. 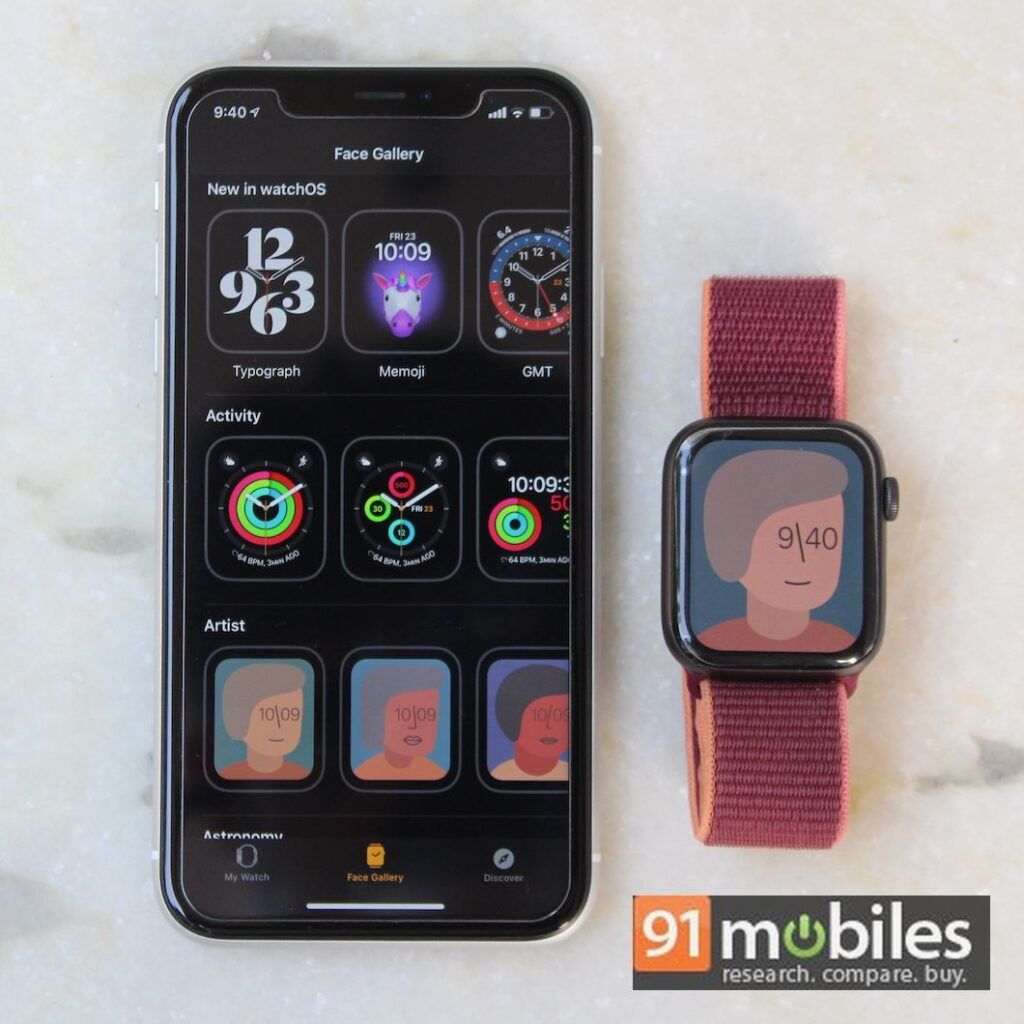 The Apple Watch SE looks identical to the Series 6, Series 5, and Series 4, which is great because it bridges the gap quite a bit when it comes to design. It has the exact same footprint and screen size with slimmer bezels around the display. Now, I have been a Series 3 user for a year now, so the bigger screen size is the obvious first thing that caught my attention. The Watch SE only comes in an aluminum case, which I don’t mind as it does or attract fingerprints or smudges as the stainless steel case on the Series 6 or Series 5. 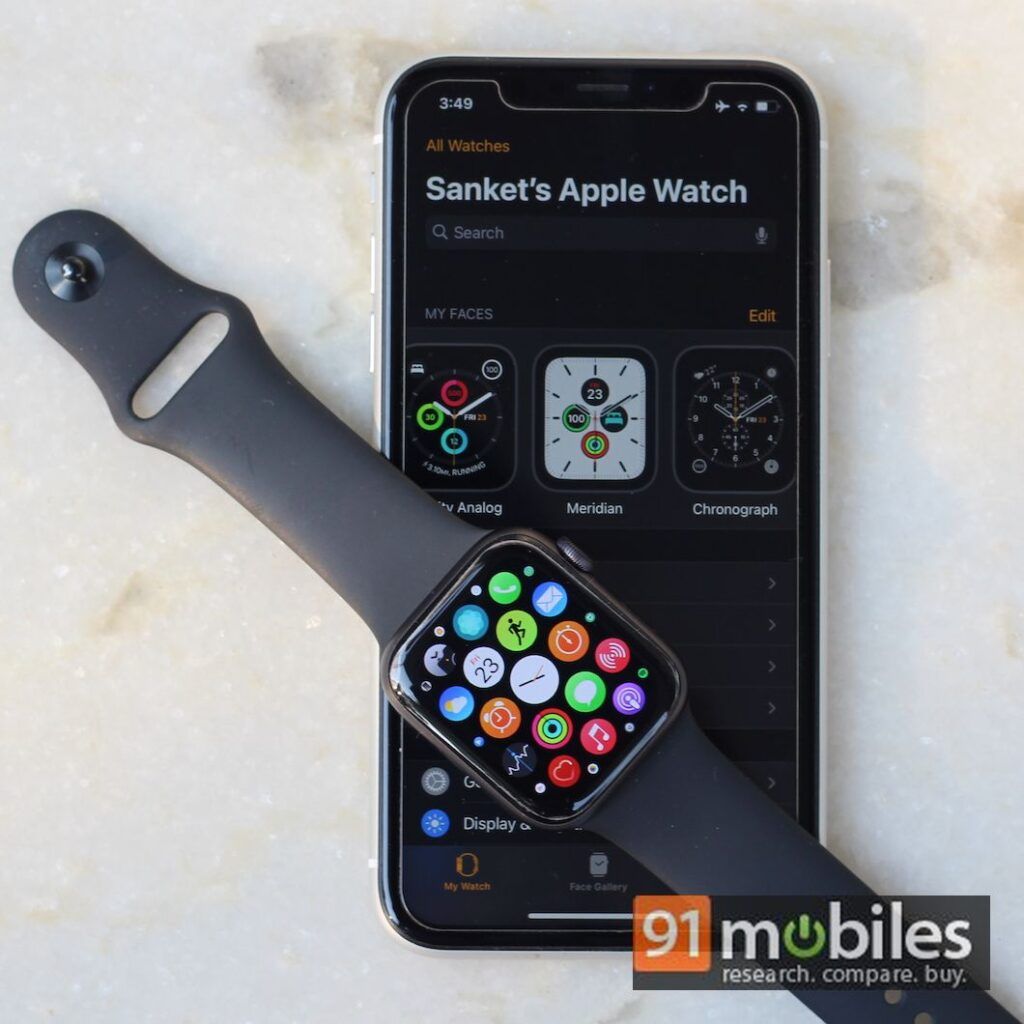 The Watch SE comes in two sizes – 40mm and 44mm. The 44mm body is perfect for my wrist and is slightly bigger than my 42mm Series 3. Despite the bigger case, the good thing is that you can use the 42mm Series 3 straps on the 44mm Watch SE while 38mm Series 3 straps are compatible with the 40mm SE case. It is worth mentioning that the new Solo Loop and Braided Solo Loop straps are only compatible with the Watch SE and Series 4 or newer models. Sorry, Series 3 owners. 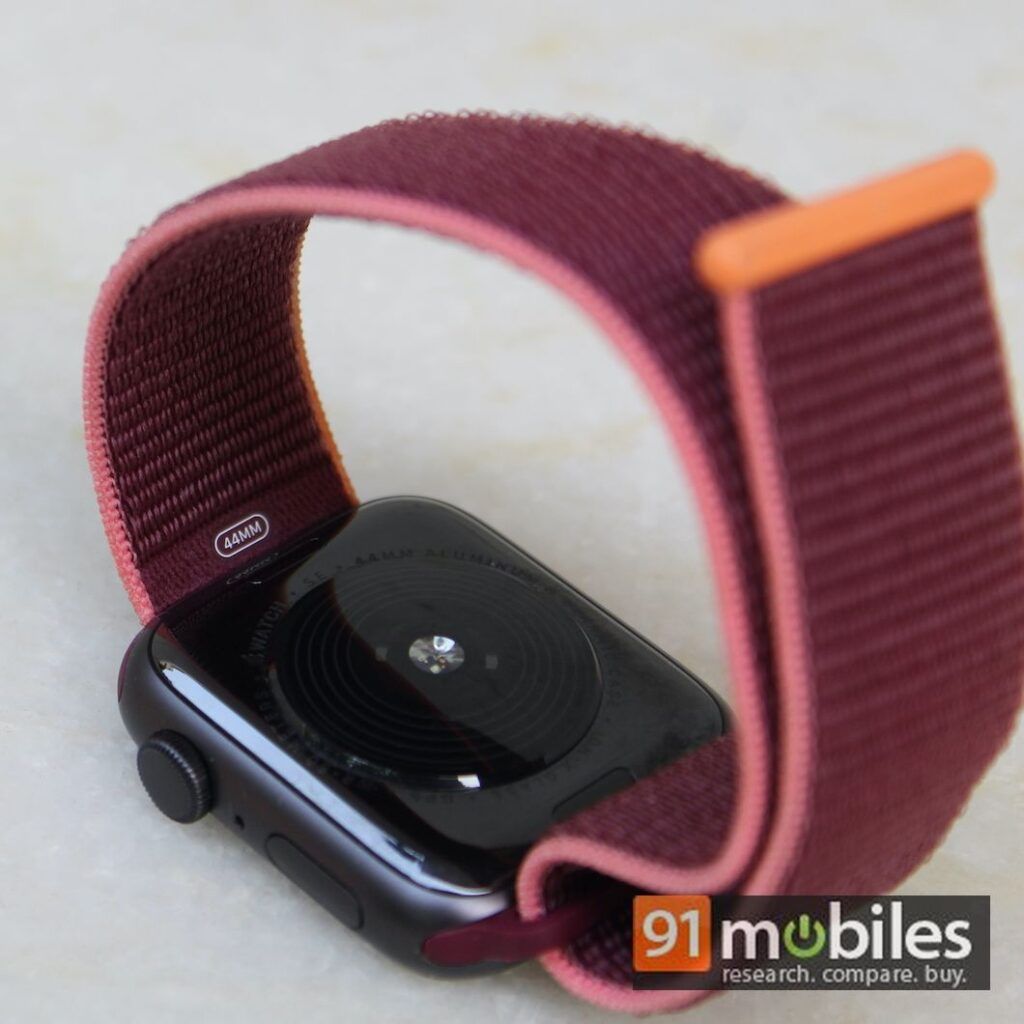 I got the plum-coloured Sport Loop band, which costs Rs 3,900 if bought separately. The Sport Loop band is a great alternative to the traditional silicone straps as the nylon material feels softer on the wrist and is more breathable, so your wrist doesn’t feel as stuffy as it would with the silicone strap. As for the case itself, you get the speaker on the left side, the familiar Digital Crown on the right side, and a flat button below it. There’s also a microphone between the buttons.

Coming to the display, the Watch SE 44mm gets the same 1.78-inch screen size as Series 6 while the 40mm variant comes with a 1.57-inch screen. This is roughly 30 percent larger than the screen on the Series 3. It is a Retina OLED display with 368 x 448 pixels (on the 44mm) and it looks great. The display is bright under sunlight and colours look punchy and attractive. Blacks are deep and viewing angles are great, so you can read the screen easily even if your wrist is at an angle away from you. 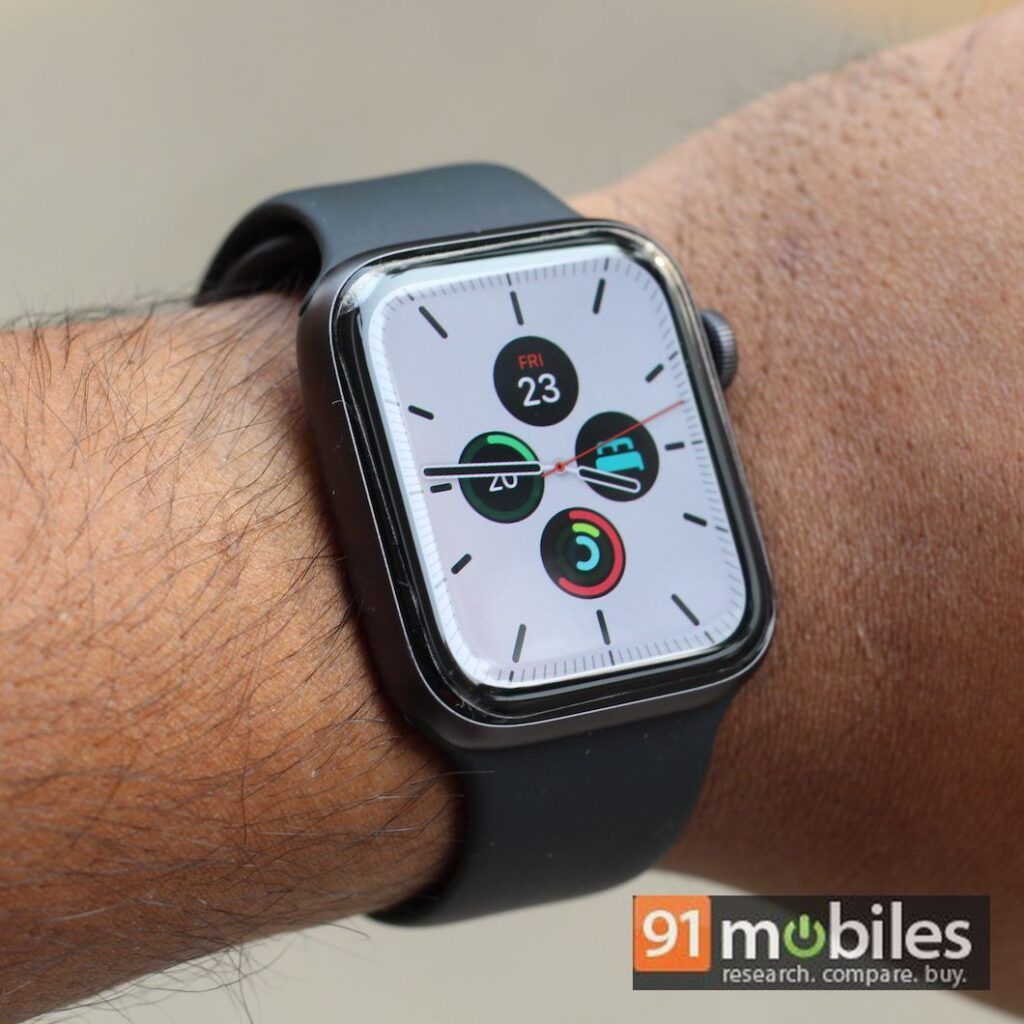 One of the main downgrades with the Watch SE is that you don’t get the Always-On display, which is available on the Series 6 and Series 5. The feature keeps the display on constantly at low brightness so you can see the time or notifications without having to tap the screen. But if you’re someone who never felt the feature important on a smartwatch then it shouldn’t bother you.

The Watch SE is powered by the S5 chip instead of the S6 processor that powers the new Series 6. But that doesn’t really matter because the Watch SE performs extremely well. It is fast and responsive and you feel this more intensely when you’re coming from Series 3. During the review period, the Watch SE did not feel sluggish or stutter while switching between apps and scrolling.

A lot of what makes the Apple Watch good is the software. The Watch SE ships with the latest watchOS 7 out of the box, which means it comes with all the latest watch faces and features like sleep tracking, hand washing detection, and so on. This is another area where Series 3 users are missing out on as they won’t get a lot of the new watch faces and hand wash detection, though sleep tracking is supported. 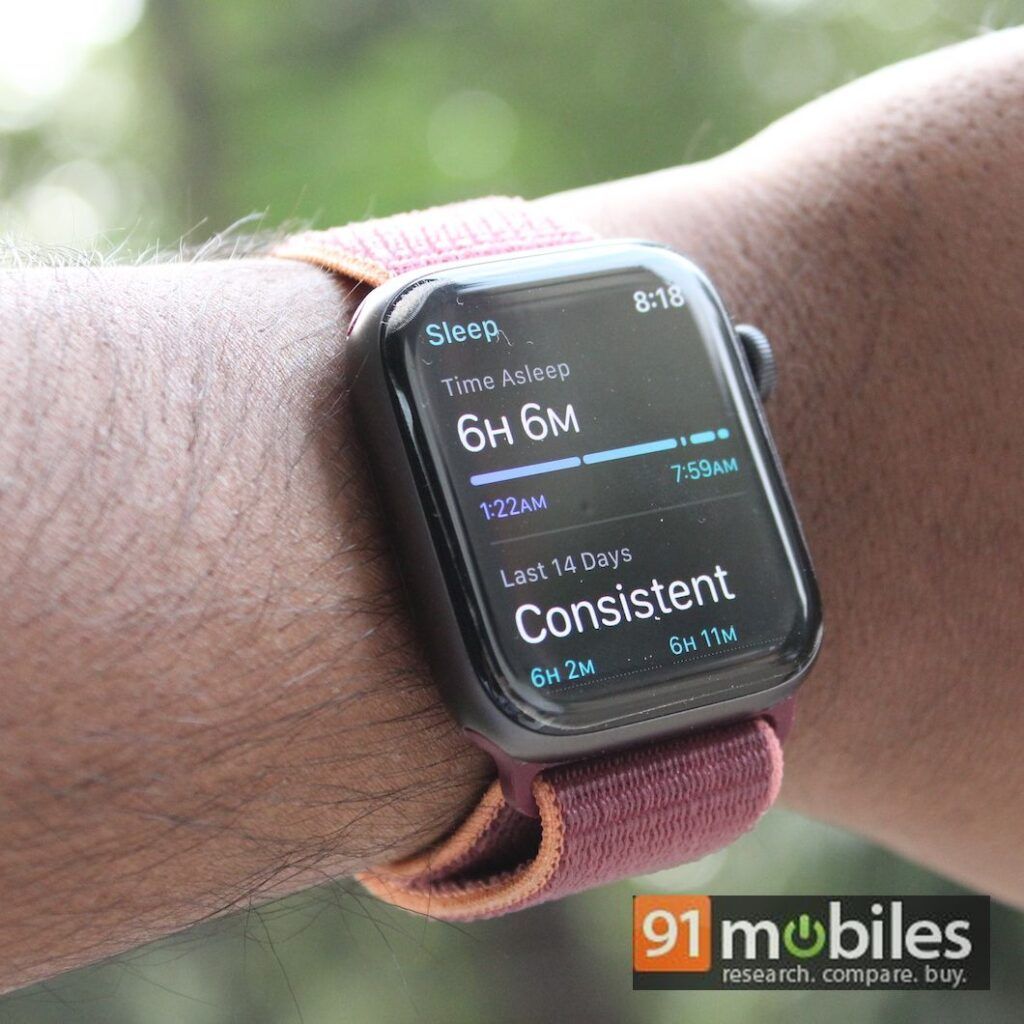 One of the biggest features of watchOS 7 is sleep tracking, which is arguably one of the most requested features from Apple Watch users. Sleep tracking is now baked into the smartwatch. It lets you schedule your bedtime routine and can automatically detect when you sleep at night and wake up. Unfortunately, the sleep tracking data is very basic right now and doesn’t show sleep variations (REM sleep, deep sleep, etc) as some third-party apps can. I reckon this is something Apple will improve on in the next major OS update. 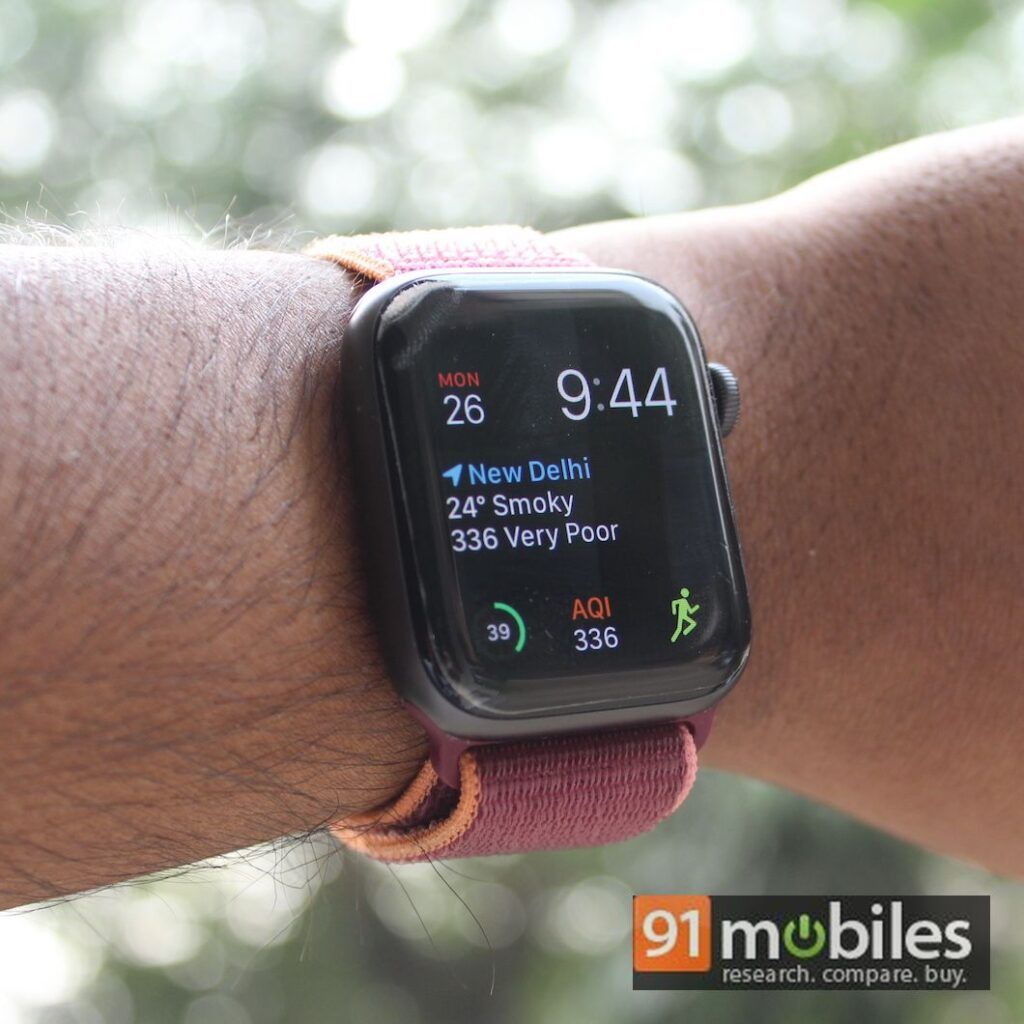 The Apple Watch SE comes with a healthy number of workouts, including outdoor walk, outdoor run, hiking, cycling, elliptical, pool swim, and more. The new watchOS 7 adds yoga and dance to the mix as well. Due to the current situation, I could only try out a few of the workouts. My daily routine involves about 45 minutes of outdoor running. The Watch SE uses in-built GPS to map the route and offer a near-accurate tracking of distance walked and heart rate without needing to take your iPhone with you. You can also store songs or podcasts on the watch, so you have something to listen to while you’re out on your run. 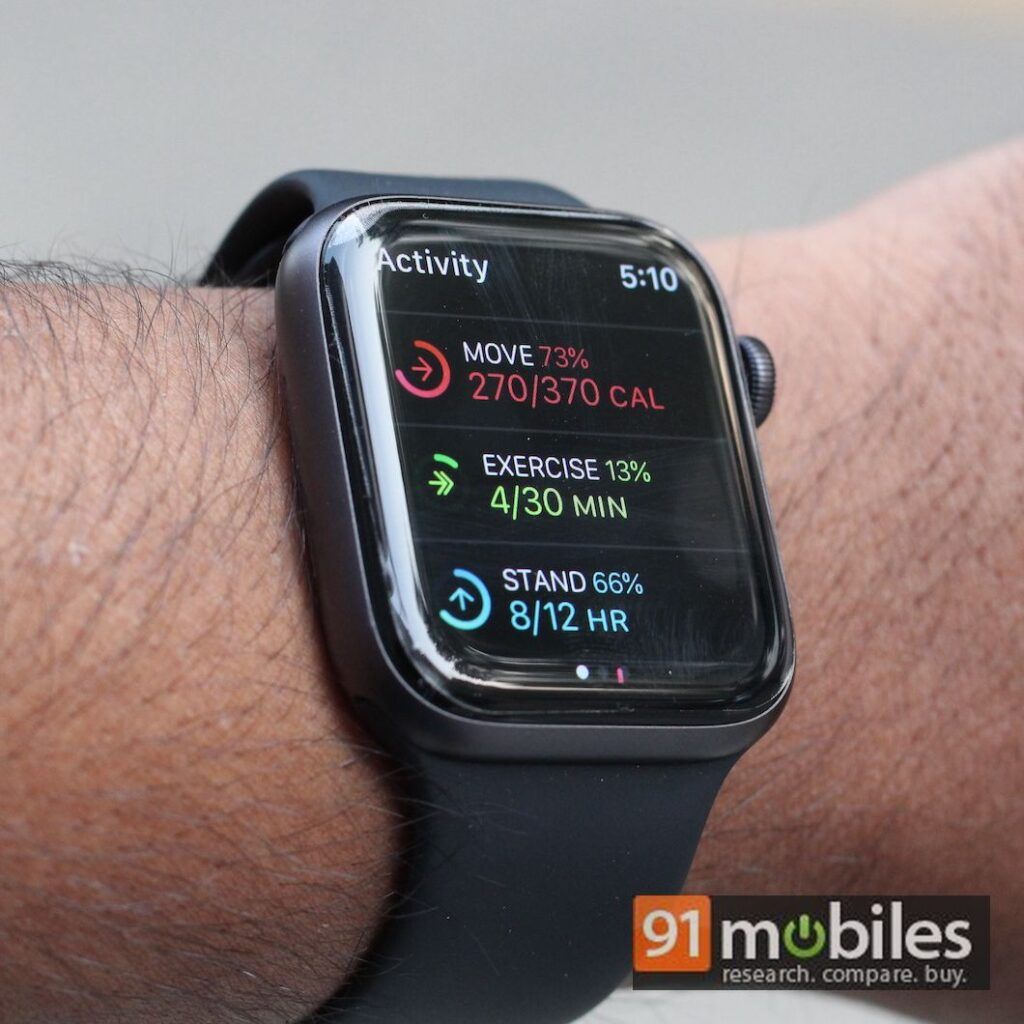 One of the greatest aspects of the Apple Watch is the haptic vibration, which is great for waking you up in the morning. The Watch SE also comes with a fairly loud and clear speaker and an always-listening Siri, which can be enabled through settings. There are tons of watch faces to choose from and you can add more complications to them as compared to Series 3.

Apple Watches over the years have offered average battery life and that hasn’t changed with the Watch SE. The smartwatch delivers anywhere between a day and a half to two days of battery life on a single charge depending on how much you interact with it on a day-to-day basis. A 45-minute workout can drain the battery by about 10 percent. You get a coin-shaped wireless charger in the box that takes less than two hours to fully charge the Watch SE. 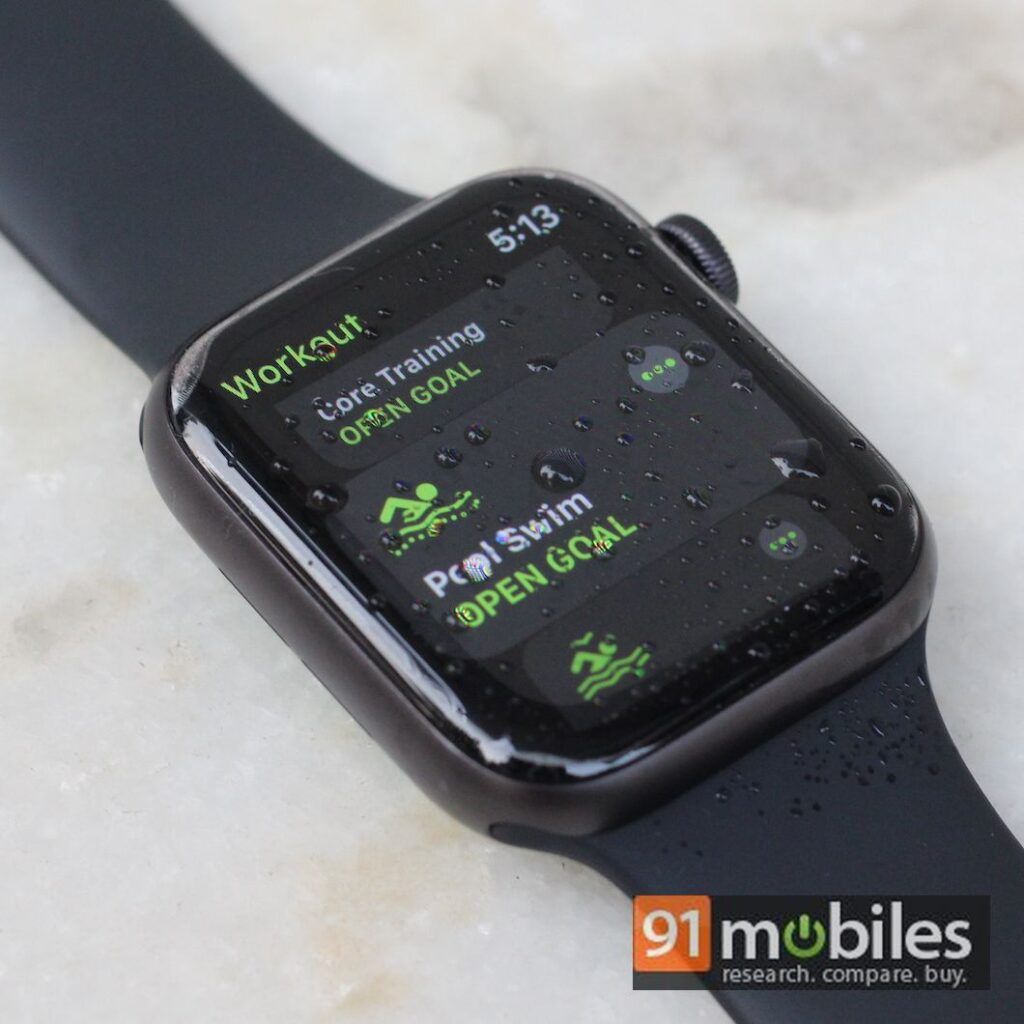 The Apple Watch SE is the new default smartwatch and the one most iPhone users should buy. While the pricing is higher than usual in India, it is the best upgrade for Series 3 users. I would also suggest the Watch SE over Series 3 to first-time buyers as Apple may not support the latter in a year or two. The Watch SE offers a great display, fast performance, and all the goodness of watchOS 7, making it a great companion for iPhone users.

That said, the Apple Watch SE is not perfect and it comes with few compromises in order to be more affordable. It doesn’t get the blood oxygen monitoring, always-on display, and ECG as the Series 6. So, the Watch SE is not for Series 4 or Series 5 users. If these extra features don’t concern you, then the Watch SE is the one to get. You can possibly expect some discounts on the Watch SE a few months down the line, which would make it even more attractive for buyers in India.