ASUS’ ROG lineup is at the forefront of innovation in the gaming laptop space, and the Zephyrus Duo 15, a first-of-its-kind machine with a dual-screen setup, announced back in 2020, exemplifies this well. Now, after a gap of nearly two years, the successor to the device has finally launched in the Indian market, coming in the form of the Zephyrus Duo 16. Apart from its dual-screen functionality, the laptop also packs in top-of-the-line specs including AMD’s Ryzen 6000 series CPU and NVIDIA’s RTX 3000 series GPU. With a starting price tag of Rs 2,49,990, the Zephyrus Duo 16 is a device meant for users with deep pockets. Its unusual design can be up for debate in terms of its utility, so let’s try and find out more about the laptop in this detailed review. 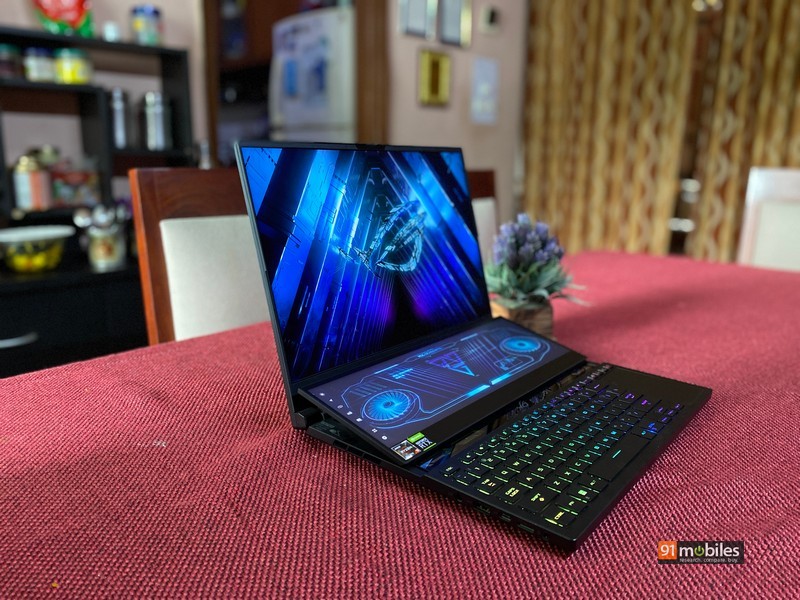 The construction of the laptop comprises a polycarbonate chassis with a stealthy matte-black finish across the keyboard. ROG’s branding is emblazoned on the lid’s back panel and the device weighs about 2.5kgs. For a laptop with two screens, the profile of the machine is relatively slim at just 2cm. The lid’s movement is fluid and is connected with the ScreenPad Plus’ (the secondary display) hinge. This allows the latter to be propped up in an inclined position every time the former is opened, creating a 28.5mm gap underneath. Apart from allowing an easier viewing angle, this also facilitates better thermal flow for the system. 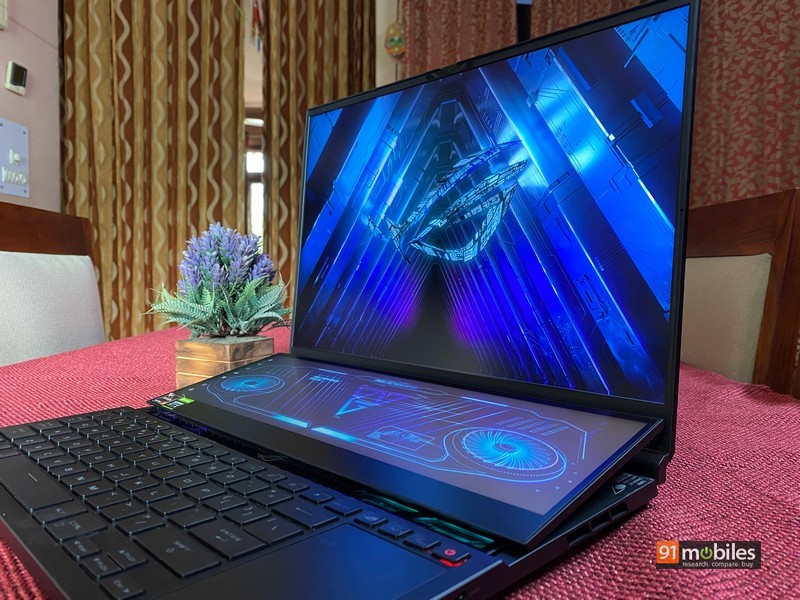 ASUS’ design team has certainly gone all out in constructing this complex mechanism for the secondary screen, while maintaining a respectable amount of sturdiness to the laptop’s overall build. However, with the ScreenPad Plus screen occupying most of the space on top, the keyboard is pushed unconventionally down to the bottom. This leaves no room for the palm rest and even the touchpad is positioned vertically on the right. Now personally, it took me a while to adjust to this layout but after some time, the typing experience became more or less manageable. 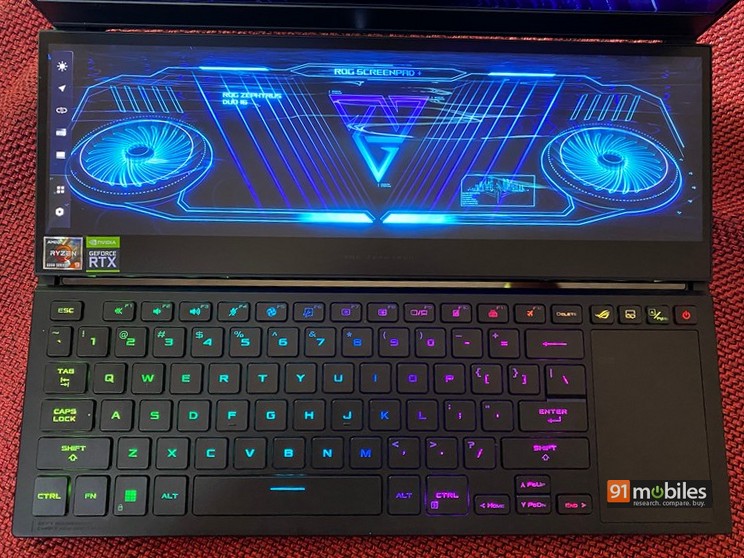 Coming now to the ports, there are two USB 3.2 Gen 2 Type-A slots along with two USB 3.2 Gen Type-C ports. You also get a 3.5mm combo audio jack, an HDMI 2.1 port, and an RJ45 LAN port. Since this is an AMD-powered machine, there is no Thunderbolt 4 support but both USB Type-C slots do have DisplayPort functionality. The wireless connectivity options are pretty standard including Wi-Fi 6E and Bluetooth 5.2. There is a webcam present on the top, capable of recording 720p videos. 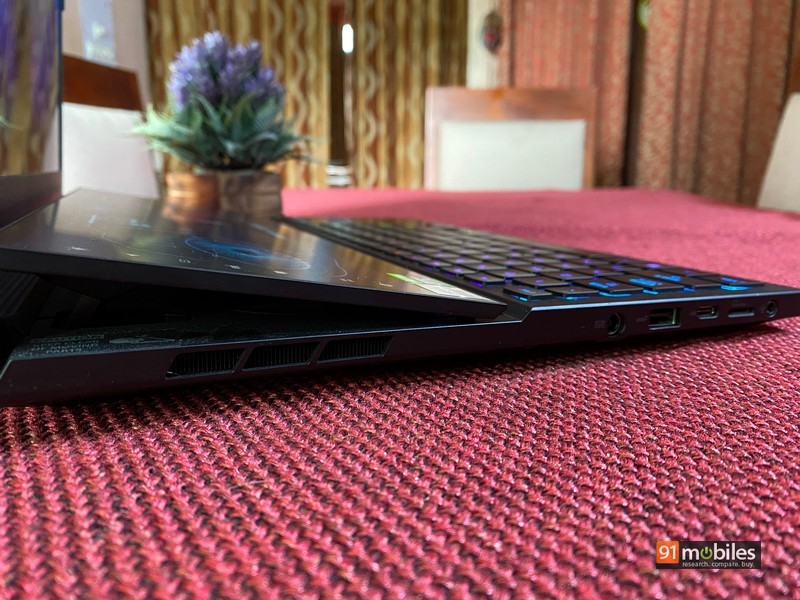 The main display measures 16-inch diagonally and offers QHD resolution along with a 16:10 aspect ratio. The variant I have with me comes with a mini LED panel that ASUS terms the Nebula HDR display. With a refresh rate of 165Hz, 1100nits of peak brightness, and a claimed 100 percent coverage of the DCI-P3 colour gamut, the Zephyrus Duo 16 is meant for visually appealing content. While not in league with more traditional OLED panels, the 512 local dimming zones provide a healthy 100,000 :1 contrast ratio. The display can output HDR content as well and I especially enjoyed watching Interstellar come to life on the mini LED screen. Whether you are inside CyberPunk 2077’s futuristic Night city or running through the Aztec ruins in Shadow of the Tomb Raider, the viewing experience remains top-notch.

ScreenPad Plus is the real show stopper here and can be considered an extension of the main screen. The 14-inch touchscreen panel has a 3,840 x 1,100 resolution but can refresh only at 60Hz. ASUS’ clever software implementations allow a seamless movement of windows from the main screen to the ScreenPad Plus and vice versa. However, the anti-glare coating on the panel, which I feel is a bit unnecessary, slightly obfuscates the colours on the display. It supports only SDR content and has an 8-bit colour depth. Needless to say, your main viewing partner is going to be the main 16-inch panel while the ScreenPad acts as supporting cast. While typing out this review, I kept my Slack and WhatsApp chats open on the ScreenPad which made my workflow more efficient. You can also use it to have your timeline open when working on Premier Pro or monitoring your Twitch stream while playing a game. The possibilities are vast and ASUS has configured the ScreenPad Plus display in a way to ease the continuity with the main screen. 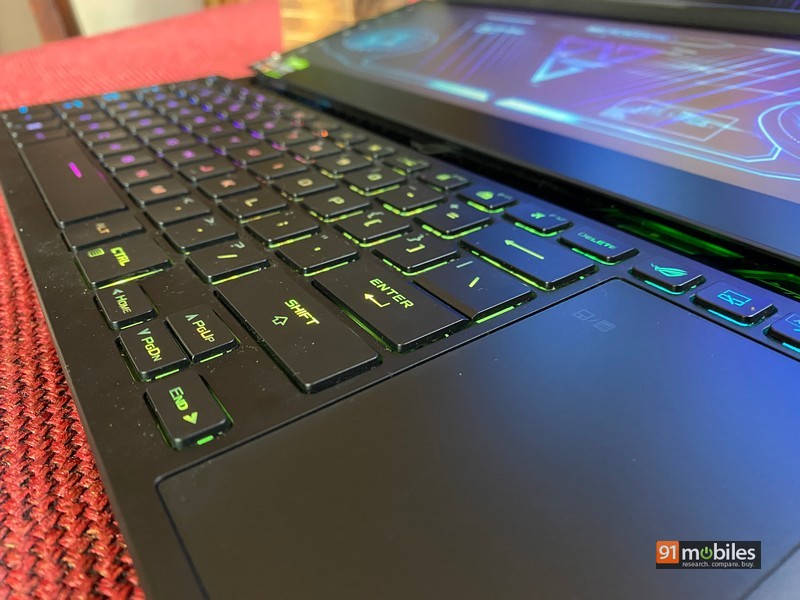 The six-row chiclet-style keyboard is in line with other ROG laptops over the years and it is just as tactile. With 1.7mm of travel and a relatively quiet typing experience, the keyboard itself was quite good. However, its placement at the bottom and the lack of a palm rest make it slightly harder to get used to. The per-key RGB customisation for each key is available to tinker around with in the Armoury Crate app. Backlighting is adjustable to three levels and is more than bright enough to be visible at night. The keyboard is not particularly cramped up but the trackpad’s positioning on the right does eat up some space. Speaking of which, the trackpad can also double up as a Numpad with a single tap. However, I do recommend getting an external mouse for activities related to gaming.

With a Ryzen 9 6900HX CPU at the helm, the ASUS Zephyrus Duo 16 is one of the most powerful processing machines out there. While AMD’s lead over Intel has been cut short thanks to the latter’s 12th-gen CPUs, the former is still ahead in terms of power efficiency. I don’t have to tell you that menial tasks, like opening a dozen Chrome tabs or Microsoft Office, will not even minutely trouble the system. The Zephyrus Duo 16 flies in benchmarking tests with Cinebench R23 churning out a multi-core score of nearly 14,000 while PCMark 10’s work simulation output stood at 6,731. Apart from that, the laptop is packed with 32GB of dual-channel DDR5 RAM which can be upgraded to 64GB. As for storage needs, my variant has a 2TB NVME PCIe 4.0 SSD that returned read and write scores of 6,709MB/s and 4,953MB/s respectively. Thermally, the system remains moderately stable with the fans spinning up loudly under sustained load although that can be customised in the Armoury Crate. The AAS Plus 2.0 system, which raises the ScreenPad Plus from the chassis, allows a better thermal flow of air inside the chamber. The 28.5mm raised chamber is said to increase the air intake by 30 percent. ASUS has also used Thermal Grizzly’s new Conductonaut Extreme Liquid Metal instead of a standard thermal paste which can cool the CPU down by an additional 15 degrees. Finally, there are also the Arc Flow fans that increase air intake by about 5 percent. All said and done, the Zephyrus Duo 16 does get slightly warm but never to the point of inconvenience. 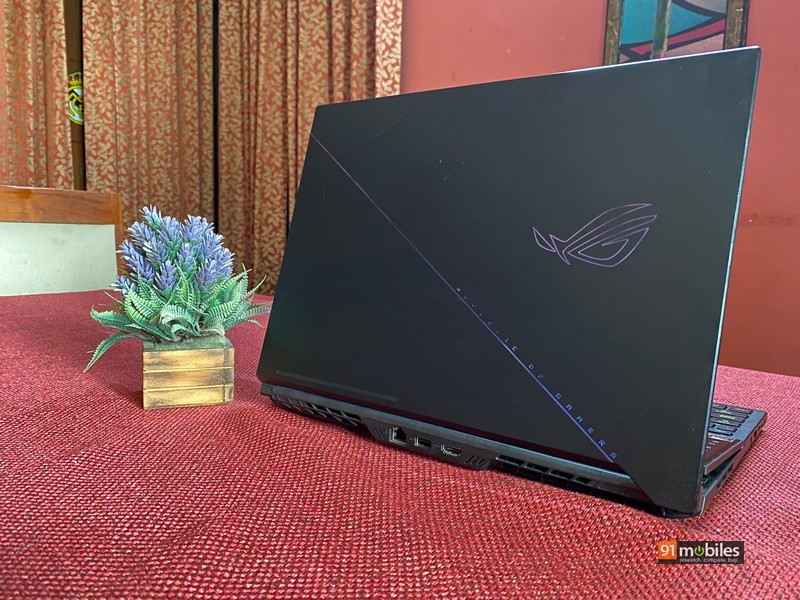 In terms of graphical capabilities, my review unit is packed with the highest-end NVIDIA RTX 3080Ti with 140W TGP. Using dynamic boost the total power draw can be increased by a further 25W. Apart from that ASUS’ MUX Switch also makes way on the device for better graphics performance. You can read more about it in my ROG Strix Scar 15 review here. Even with its relatively slim chassis profile, the Zephyrus Duo 16 has proven to be a more than capable gaming machine. On 3DMark’s TimeSpy benchmark returned a superlative score of 12,007, one of the highest I’ve seen. God of War at QHD resolution and ray-tracing on gave a constant 100-120fps count at Ultra graphics. CyberPunk 2077 at QHD with ray tracing and graphics at ultra ran at 50-65fps while The Witcher 3 kept 90-110fps constant even after a couple of hours of gaming. Titles which are less intensive like CS:GO and Valorant easily push past 200fps and can sustain it for long periods of time. I have to emphasise that all games ran on the Turbo fan profile with the MUX Switch tuned to discreet GPU for the best performance. 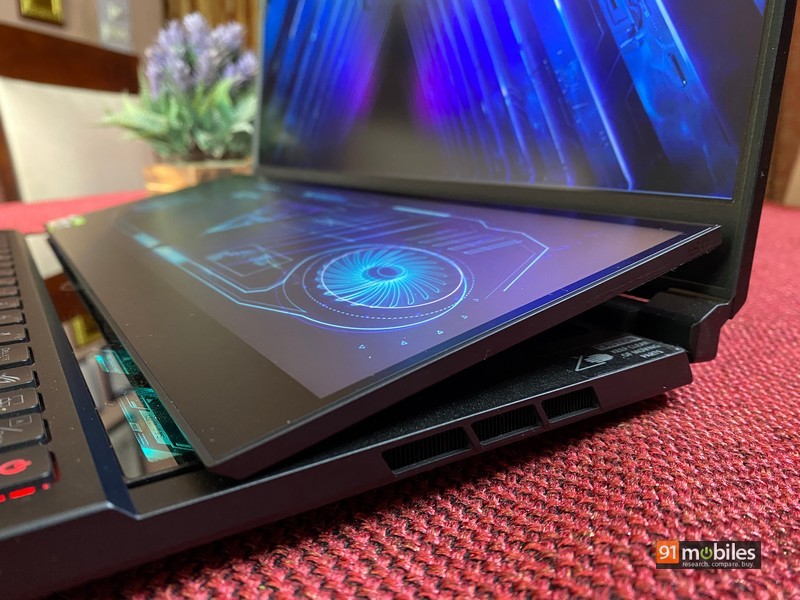 Audio on the Zephyrus Duo 16 is pretty decent when compared to the rather poor standards usually set by gaming machines. The six-speaker setup comprising two 2W dual-force woofers and two 2W tweeters can make for a nice audio experience inside a quiet room. The webcam up top has a ToF sensor and IR blaster integrated for snappy facial authentication via Windows Hello. There is a 90Whr battery under the hood which needs to support two screens along with all the heavy-duty hardware. It stands to reason that the battery life of the device is not very good. I got about 3-3.5 hours of screen-on time which I consider slightly below average for a gaming laptop. The 240W adapter provided with the laptop is key for optimum usage on this machine.

The Zephyrus Duo 16 is ASUS’ most prolific gaming laptop setup to date but carries a hefty price tag. My unit which has the mini LED display, top-of-the-line AMD silicone and NVIDIA’s best mobile GPU, will set you back a staggering Rs 3,61,990. Now you should definitely ask yourself if the ScreenPad Plus has some utility for your work. There is an undeniable air of superiority around the Zephyrus Duo 16 whether it is the sound system or crispness of the display or just the overall build of the laptop. If these aspects, along with the laptop’s breakthrough performance appeal to you and you can stomach the price, the Zephyrus Duo 16 could well be for you.