It is safe to say that ASUS’ Vivobook lineup has established a firm foothold in the budget to mid-range laptop segment. A few of the latest Vivobooks have actually been my top recommendations under the Rs 70,000 mark for users who don’t have high graphical requirements from their machine, want a portable and power-efficient option. This time around, ASUS is changing gears with the Vivobook Pro 14X OLED which the company has made for “creators, designers, vloggers, and artists”. Its starting price tag of Rs 94,990 does set the expectations high for the laptop. In this review let’s see if the Vivobook Pro 14X OLED is worth considering. 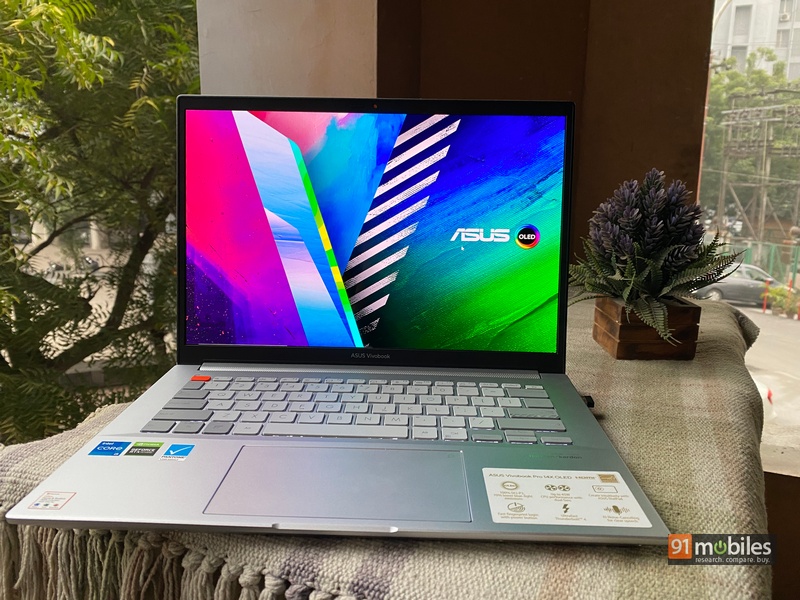 ASUS has really come through in terms of the overall design aesthetic and feel of the device. The lightweight nature of the chassis coupled with the matte-like aluminium build imparts a premium look to the Vivobook Pro 14X from the moment you set your eyes on it. While the laptop is not particularly thick, it could do with shaving off a few extra millimetres for a more even look across all its sides. There is little to no flex on the keyboard but I do feel that the hinge could have been made a little bit more sturdy. The lid opens quite easily and the movement is very smooth, but the lack of rigidity on the hinge means the screen wobbles while typing. On the lid’s back, you can see the redesigned Vivobook logo which is quite appealing. I do prefer a charcoal black-style colour combination on a laptop, but the silver-grey scheme on the body and keyboard also looks quite nice. 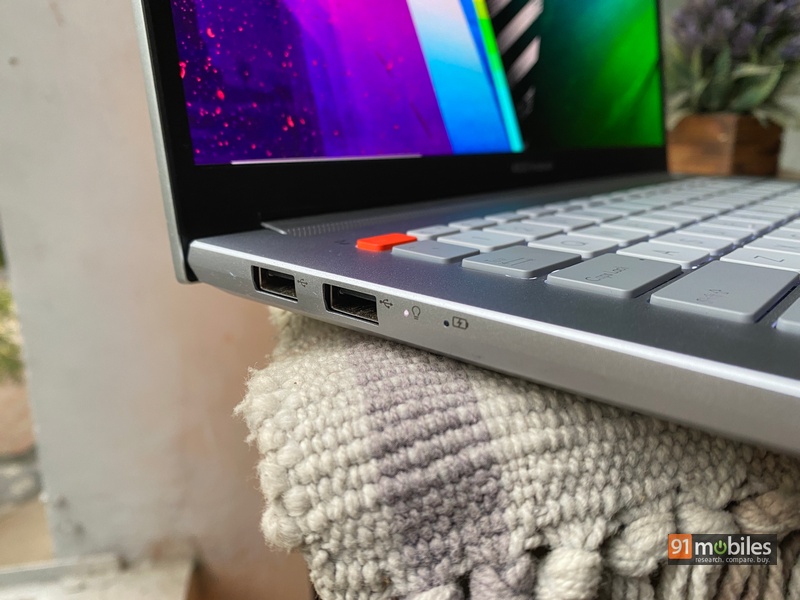 On both sides, the laptop has a bevvy of ports for most of your connectivity needs. There is a USB 3.2 Type A and Type C port on the right along with a microSD card reader, an HDMI 1.4 port, and a 3.5mm headphone jack.  The left side has two USB 2.0 Type-A ports and LED charging indicator lights. In terms of wireless options, the laptop provides you with dual-band Wi-Fi 6 (802.11ax) and Bluetooth 5.1 connectivity. 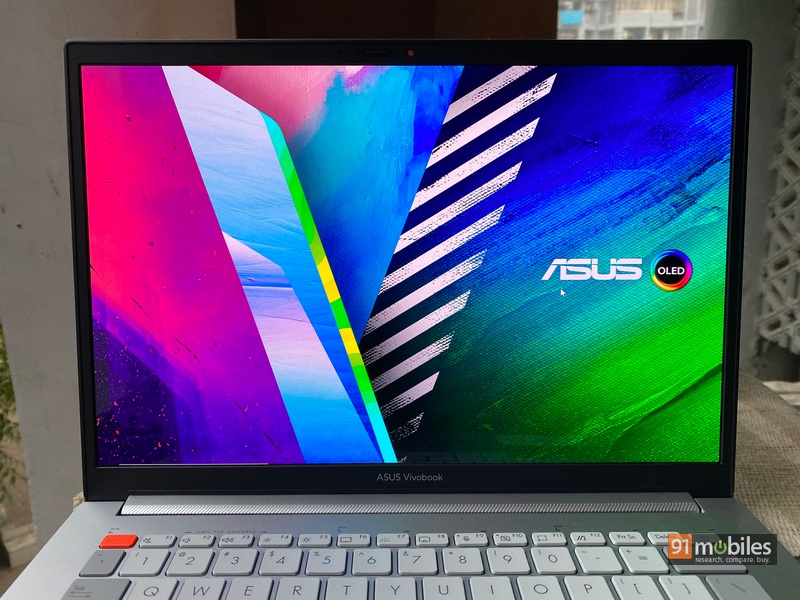 A reasonable portion of the Vivobook Pro 14X’s price tag is due to the 2.8K OLED panel on the laptop’s front. Devoid of the usual LCD issues such as poor viewing angles and dull contrasts, the Vivobook Pro 14X could be a solid option for creators. ASUS’ claims of 133 percent sRGB coverage are quite astounding, to say the least, and to my eyes, the display resonated with extremely life-like colours. The PANTONE Validation might also have something to do with that, making the Vivobook Pro 14X a useful tool for colour correction work. Every single HDR video I watched on the screen did not fail to astound me with inky blacks which contrasted well with the popping colours. The peak brightness levels were more than ample at 600nits, making it quite efficient in brightly lit environments. ASUS has also kept in mind the issues related to OLED burn-in, which is a phenomenon wherein the display shows a faint image from the previous frame even after a new one appears on the screen. To counter this, ASUS has employed Samsung’s Pixel Shift technology, special screensavers to refresh pixels, an extended warranty on the panel, and more. Also, the screen has a 90Hz refresh rate for smooth scrolling and browsing experience. 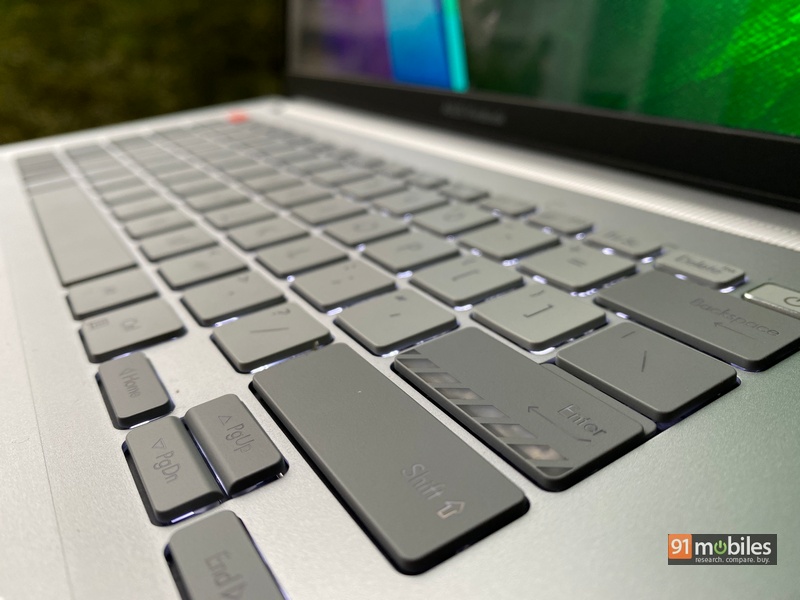 Keyboards on Vivobooks have actually have been getting better over the past couple of iterations. The 14X is no different, with the regular scissor-switch keys arranged in a six-row layout. The travel is acceptable and the typing experience is good, albeit slightly noisier than I would’ve liked. The power button has a silver accent around it and also a fingerprint reader integrated underneath it, while the escape key has a very distinguishable orange finish. There is three-stage backlighting available in a single white colour which makes nighttime usage easier. Below the keyboard is an exceptionally large trackpad with great haptic feedback and decent latency. 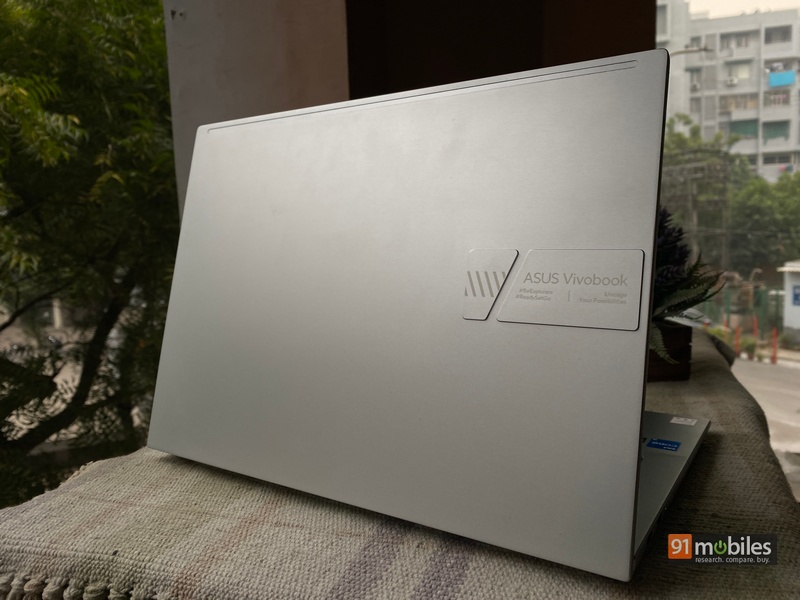 On the performance side of things, the Vivobook is running on the Intel 11th-gen i5-11300H chipset based on the Tiger Lake architecture. There is another version of the same laptop that runs on the AMD Ryzen 9 5900HX. In terms of benchmarks, the Vivobook Pro 14X outputs 5,939 on Cinbench R23’s multi-core test while the Ryzen 5 5500U on the Vivobook Flip 14 (review), incidentally much cheaper than the 14X, has a score of 6,441. The same is also translated to Geekbench 5’s multi-core test wherein the Ryzen 5 has an advantage over the 11th-gen i5 chips. I would have to assume the gap will increase dramatically when you use the Ryzen 9 version of the Vivobook Pro 14X. However, for tasks that involve day-to-day activities such as operating Chrome or Microsoft’s suite of apps, the 14X absolutely flies without so much as a stutter. ASUS has made a lot of claims about superior cooling methods used on the device, but even with some basic graphically intensive tasks, the fans spin up to produce a rather loud din. The NVIDIA RTX 3050 and its 4GB VRAM are certainly not lightweight and serve up to be better than the Iris Xe integrated graphics. Even so, running the Tomb Raider benchmark while keeping the settings at High and resolution at FHD, the score was 25fps, which is quite low. I did run some low-intensity popular titles like Valorant and Warzone, both of which barely managed 50-60fps at medium settings. In terms of storage, the device gets a 1TB M.2 NVME PCIe SSD with read/write speeds of 3,558MB/s and 3,063MB/s, which are in the acceptable range. As for the memory, the 16GB DDR4 RAM is soldered to the motherboard and is non-upgradable. A shout out also for the incredibly good and loud speakers present on the device. The tuning has been done by Harman/kardon and I was impressed by how well the speakers maintained lows and mids while also giving depth to the music with substantial bass. 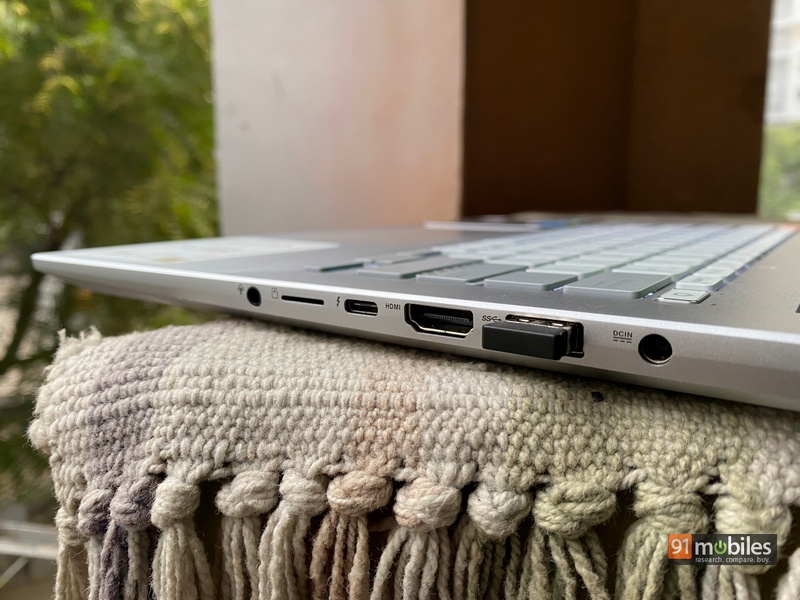 On the battery front, I was surprised to see the 63Whr cell on the 14X last for a significantly long time. With brightness levels set at 75 percent, resolution maxed out, refresh rate at 90Hz, and power management at balanced, my total screen-on time was about 7 hours. Impressively enough, at power saver mode the battery could push the laptop up to 11 hours provided the GPU was not stressed out. 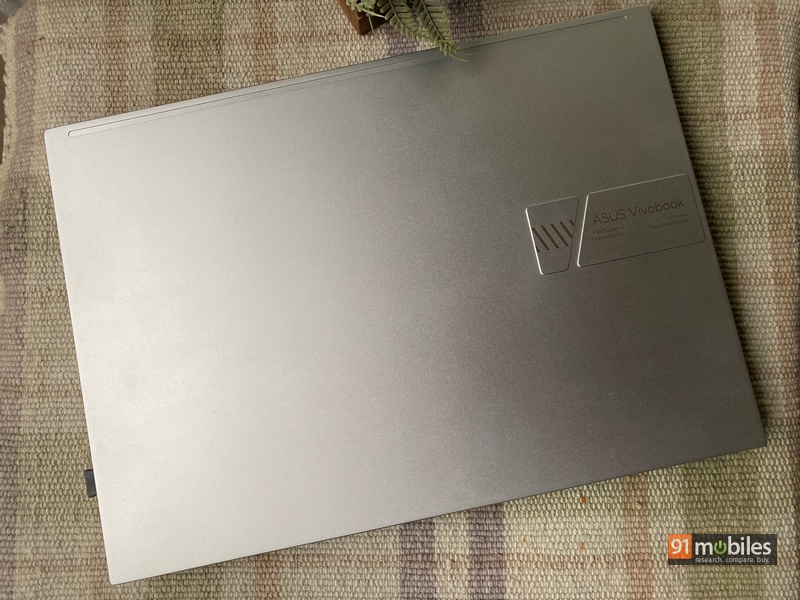 The laptop is not equipped to handle intensive gaming and the fans spin up making a lot more noise than necessary for said tasks. That said, the Vivobook Pro 14X is definitely a ‘Pro’ when it comes to the display and the amount of colour calibration that has gone down to make it. I’m certain very few laptops will be able to match the quality, dynamic range and overall soothing tones of the Vivobook Pro 14X’s panel. The battery life is also quite respectable and I love how well Harman/kardon has tuned the speakers. The price tag could be very enticing for users with requirements that specifically target colour grading and other imaging and video-centric tasks performed by creators.