Not too long ago, gaming laptops were bulky and quite pricey. However, over the past couple of years, the emergence of affordable gaming machines has made the market quite competitive in terms of features and design. HP has been innovating in the PC segment for a long time and has been making strides in the budget gaming market as well with its Pavilion Gaming lineup. This time around the company has announced the HP Pavilion Gaming 16 laptop powered by the 10th-gen Intel processors and NVIDIA’s latest GTX GPUs. The unit I have for review is priced at Rs 1,10,999, but you can buy the lower specced version of the laptop starting at Rs 80,999. Let’s find out if the device is worth its salt in the crowded budget gaming laptop segment. 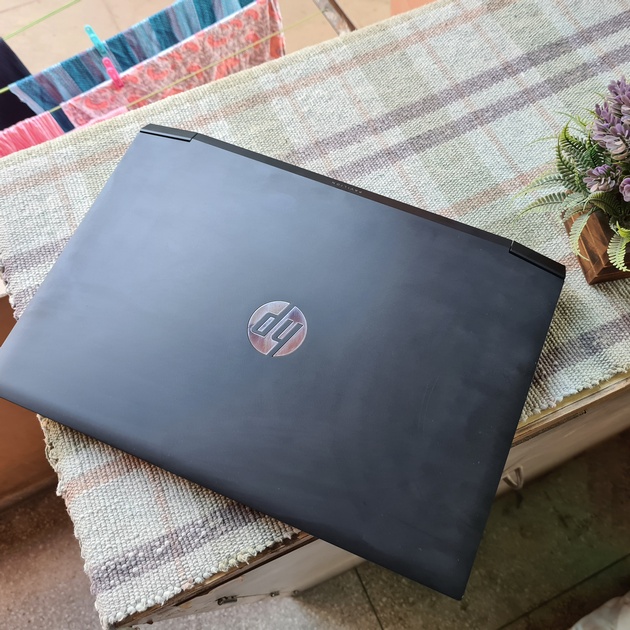 The HP Pavilion pulls off an extremely sleek design which looks to impress not only gamers but also those who would want to use the device for professional use. The signature hinge design, seen on previous Pavilion laptops and also on the Omen series, is quite sturdy and gives the impression of the lid floating on the sides. The construction is not rigid which makes the lid easy to open with one hand without making the bottom half wobble. The edges around the chassis are razor-sharp, with the palm rest curving downwards, so prolonged usage does cut into your wrist. As mentioned the name of the laptop is the Pavilion 16 which indicates a 16-inch display and it is quite impressive that HP has managed to fit it inside the body of a typical 15-inch laptop. The lid itself gets a matte finish as does the palm rest and most of the chassis while the HP logo on the lid gets the typical polished glass finish. The laptop is prone to a lot of smudging as you can probably see from the pictures. 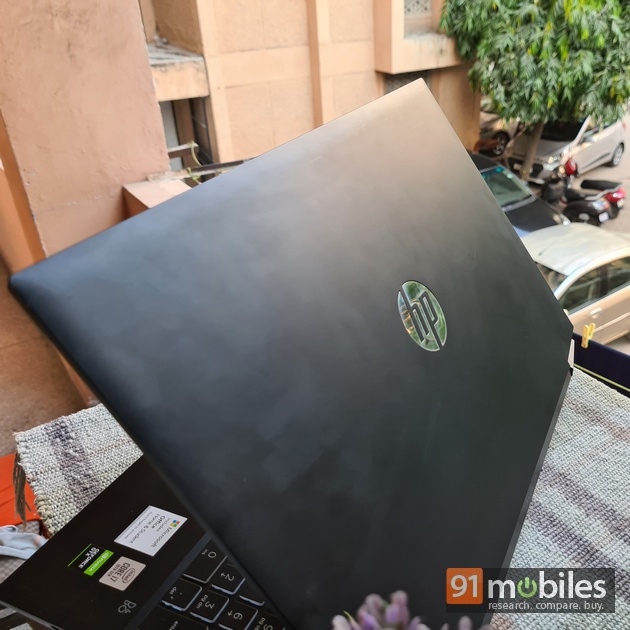 With a 16-inch display and significantly heavy-duty internals, the laptop does pack in a lot of weight which starts at 2.35kgs for the lowest variant. Combined with a hefty power brick, it’ll be a task to fit the device inside your bag. Above the keyboard, you will find hexagonal indentations laid out horizontally to form the speaker on the laptop. Alongside it is the power button which is visible only as a strip of light when you are working in dark, indoor conditions. You also do get a webcam at the top but there is no physical slider to cover it up for privacy. 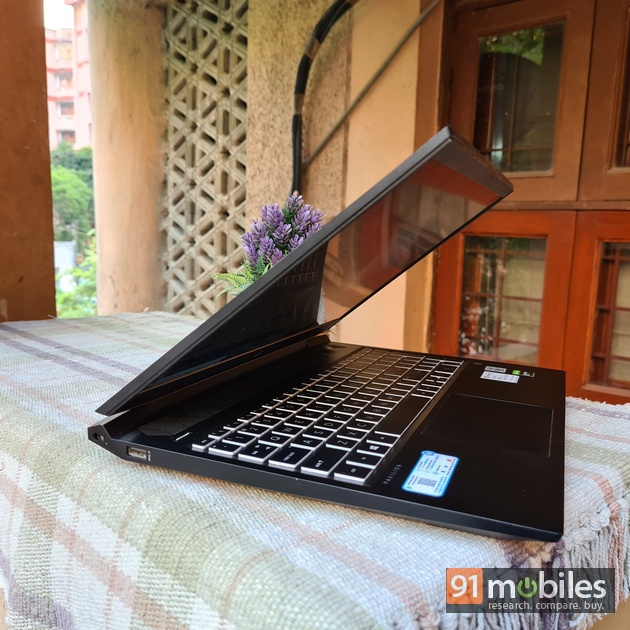 As for ports, you get a limited selection which is in accordance with the price of the device. On the left side is a solitary USB A port having the USB 3.0 standard along with the power supply port. On the right you get a USB C port with DisplayPort 1.4 support, 1 X USB A supporting the USB 3.0 standard, 1 X HDMI 2.0 port, 1 X RJ 45 LAN port, 1 X SD card slot, and 1 X 3.5mm headphone jack. A couple more USB A and USB C ports would have been delightful but all basic functionalities can be achieved with the ports that are provided. 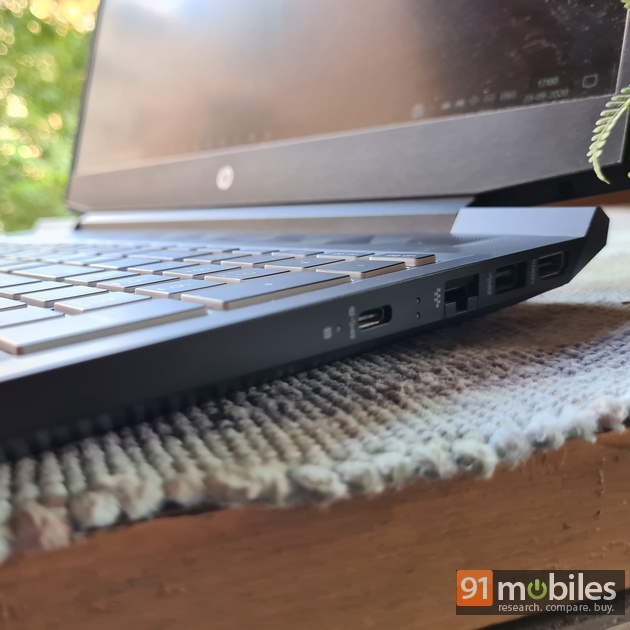 On the display front, HP Pavilion Gaming packs in a 16-inch IPS LCD panel with thin bezels, FHD (1,920 x 1,080) resolution, and a standard 60Hz refresh rate. The screen only covers about 45 percent of the NTSC color gamut which is slightly disappointing when compared to the likes of the Lenovo Ideapad Gaming 3i (review) or the Acer Nitro 7 or the Asus TUF A15, all of which are priced lower. Viewing angles are not bad but there is a definite colour shift even when tilting the screen slightly. Not getting a higher refresh screen could be considered a qualm, however in all fairness, the GTX 1660ti is not going to be cranking up the highest of frame rates, so I’ll give it a pass. HP has said the Pavilion 16 can hit about 250nits of brightness which is not on the higher side but will get the job done quite well indoors. Overall, a slightly dull display but no cause of complaint for casual gamers. 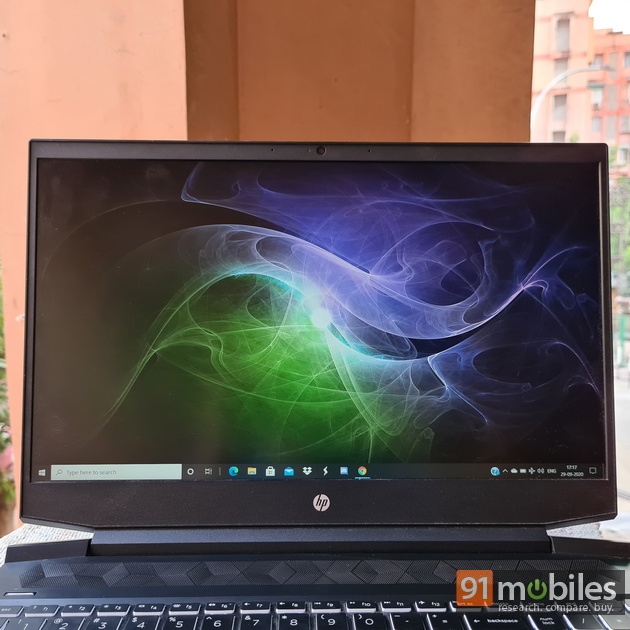 The HP Pavilion 16 packs in a full-sized six-row keyboard complete with a big Numpad on the side. This is to be expected in a 16-inch frame and the spaced-out keys make it easy to type. While the primary function of the device serves gamers, the keyboard on the laptop is ideal for typing out long documents, such as this review. Yes, the palm rest can cut into your wrist but after a point, it is barely noticeable. The keys themselves have excellent travel and register a click almost instantaneously. A gaming laptop is not complete without keyboard backlighting and HP has provided a singular white light to illuminate the keys, although it wouldn’t be too far to ask for some RGB. In essence, the keyboard delivers on all aspects of a wholesome laptop experience. 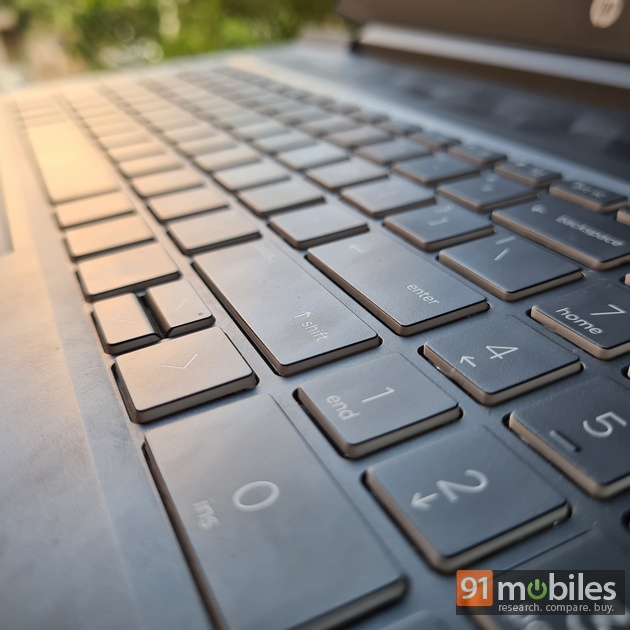 As for the trackpad, the material on the surface very much feels the same as the rest of the body. My finger doesn’t exactly glide over like I had expected but the response of the cursor was more or less in line. The area of the trackpad isn’t the largest but it is not a cause of concern since you are most likely to use an external mouse in any case. 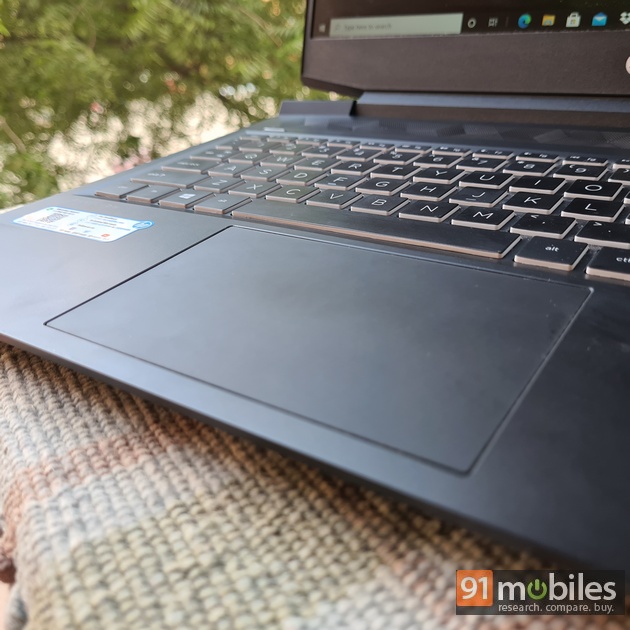 A big part of a good gaming laptop is heavy-duty internals that can deliver constant performance under sustained load and also have good thermal outputs to reduce throttling. The HP Pavilion 16 packs in the latest Intel 10th-gen CPUs which are part of the 14nm Comet Lake lineup while the graphical load is handled by NVIDIA’s GTX 1600-series GPUs. My review unit is packed with the Hexa-core Core i7-10750H CPU which has a maximum clock speed of 5.0GHz and has 12 threads. The GPU is NVIDIA’s GTX 1660ti with 6GB of VRAM and the standard MaxQ architecture. You can opt for the cheaper GTX 1650 and power down to the 10th-gen i5 CPU for an Rs 80,999 price tag. As far as performance goes, you can have very few complaints considering the hardware the Pavilion 16 is packing. Running some of my standard benchmarks on the device yielded expected results. On Geekbench 5, an overall metric of CPU performance, the Pavilion 16 returned impressive scores of 1,217 and 5,805 for single-core and multi-core respectively. Cinebench R20 tests the ability of the CPU to perform under sustained load and the laptop scored 2,574 which is about what you can expect from the 10th-gen i7 CPU. PCMark10 shows how good the laptop is at multi-tasking and in general using it for daily work. The device showed a respectable 5,187 score on the benchmark. Apart from that, the review unit I have has 16GB of DDR4 RAM while storage needs are fulfilled by 256GB of PCIe NVMe SSD and a 1TB SATA HDD. CrystalDiskMark lets you know how good the SSD is at read/write. For the Pavilion 16’s SSD the scores were 2,833MB/s for read and 1,624MB/s for write, pretty standard on any SSD worth its salt and supported by a good graphics card.

Talking of graphics, the Pavilion 16 is pretty adept at running almost any game at decent frame rates. 3DMark’s Time Spy benchmark is usually a very good way to test the graphical prowess of the device and I got a respectable score of 5,256 from the laptop. Throwing a couple of low-intensity games such as Call of Duty Warzone or Valorant will allow you a healthy 100fps at the highest graphics settings provided anti-aliasing is turned off and shadows and texture settings are at a minimum. More intensive games such as Far Cry 5 and Shadow of the Tomb Raider gave 70 and 60 fps at the highest settings respectively which were quite impressive.

However, there is an issue with sustained gaming on the device, with the frame rates dropping significantly after the third run of Tomb Raider where I was getting frame rates closer to 40 in the highest settings. Now some amount of throttling is expected when you are playing intensive games but the Pavilion 16 gets substantially hot and I believe that it is due to the less than average thermal design. Even so, the laptop does manage to stabilise after the third run and was giving a constant frame rate. The fans kick in at full blast when you are playing any game where a lot of the world has to be rendered at once and it is preferable you play with your headphones to drown out the din. 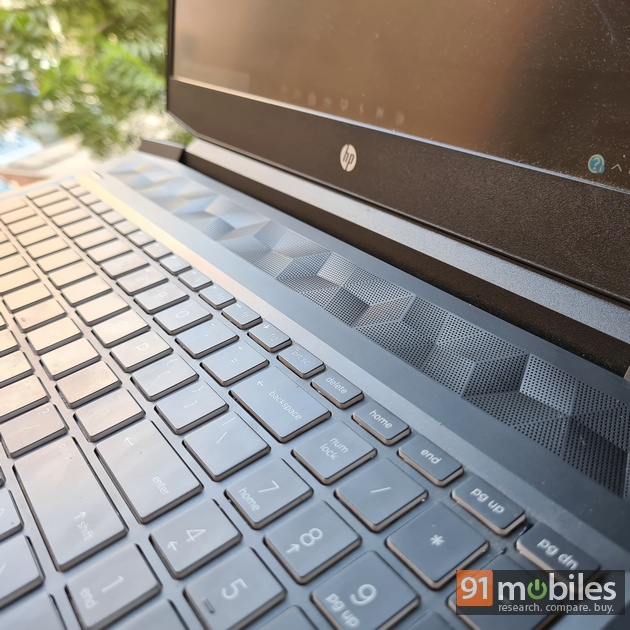 A special mention to the Bang and Olufsen partnership that HP has going on with its laptops. The same branding is present on the Pavilion 16 and it is one of the nicer sounding speakers out there. The sound is not bass heavy but it does get pleasantly loud while not distorting vocals or instruments. There is no fingerprint sensor and the webcam does not support facial recognition via Windows Hello.

Lastly the Pavilion 16 packs in a 52.5Wh cell which can be considered on the lower side for a gaming laptop. While most likely you will not be making use of the GPU while the laptop is unplugged, you are quite likely to get about 60 minutes tops of any game, 45 if you want to crank up the settings. For normal usage, I did get a screen on time of about 5 hours and 30 minutes where the screen brightness was about 50 percent and I was mostly streaming Netflix while on battery saver mode. The laptop is bundled with a 200W charger that will juice up the device in about 2 hours. 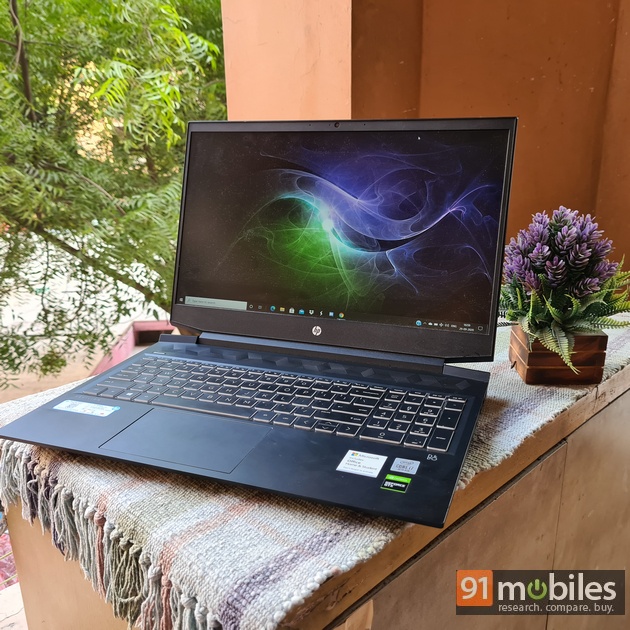 The HP Pavilion 16 Gaming is an interesting proposition in that it packs in one of the biggest displays in a reasonably sized package. The performance and graphical capabilities are top-notch but you are going to bear the brunt of thermal throttling over an extended period. That being said, casual gamers will reap the benefits of a great keyboard and ideal performance to run a whole variety of games. My review unit is quite reasonably priced for its internals but if you plan on cheaper options running AMD’s latest Ryzen chipsets you can look towards Dell’s G5. Other Intel-powered laptops in the same price bracket include the Legion Y540.