Dell and quality PC products have been synonymous for as long as I can remember. Whether it is sleek ultrabooks or powerful gaming machines, Dell has been doing its part quite diligently to provide compelling products to its consumers. Earlier in the year, the company had announced a new addition to its famous XPS lineup in the form of the Dell XPS 13 9310. If it’s a light, portable and trendy laptop you are looking for, and don’t mind the asking price, Dell’s latest ultrabook could be for you. There are two variants of the XPS 13, one with the 11th-gen Intel i7 processor and one with the i5 version. I have the former for review and it flaunts one of the best displays I have seen in the laptop segment. Does it warrant a Rs 1,80,990 price tag though? Let’s find out in this review. 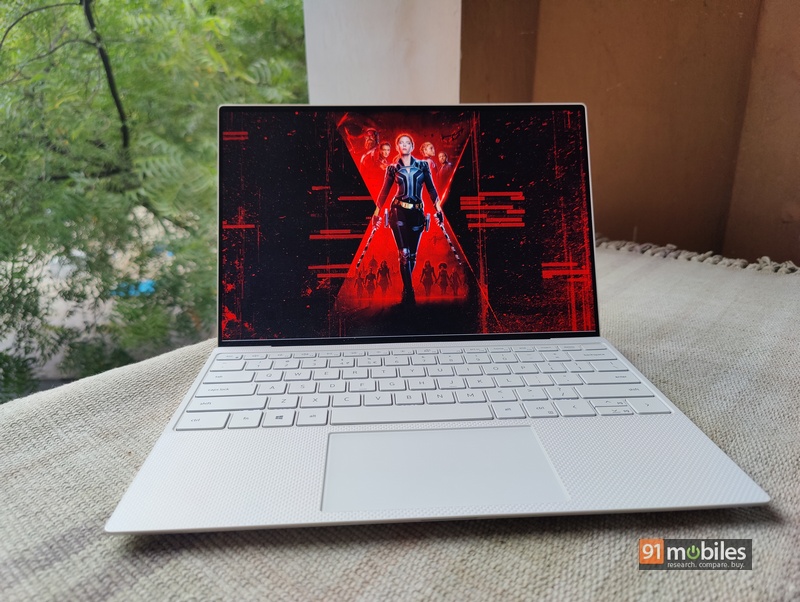 The XPS 13 is a super lightweight machine with a thin chassis resembling that of the MacBook Air. With polished aluminium sides and a unibody design that employs a carbon fibre finish on the keyboard, it shouts premium. All the thermal management in a 14.8mm thin design is present at the bottom where you can also find the speaker setup. The hinge construction provides for one of the most fluid motions of the lid I’ve ever seen. It has been a while since I could open a laptop with just one finger without the base lifting up as well. The XPS 13 truly is a thing of beauty and the Frost White colour bodes well with the exterior. Of course, the super-thin design also requires sacrificing several ports and the XPS 13 has a grand total of four. There are two USB C Thunderbolt 4 ports, a microSD card reader, and a 3.5mm headphone jack and mic combo. The laptop could do with at least a DisplayPort if nothing else, or a few extra USB C ports given that one of the two has to be occupied for charging the device. Wireless connectivity options on the device include Bluetooth 5.0 and Wi-Fi 6 AX1650. 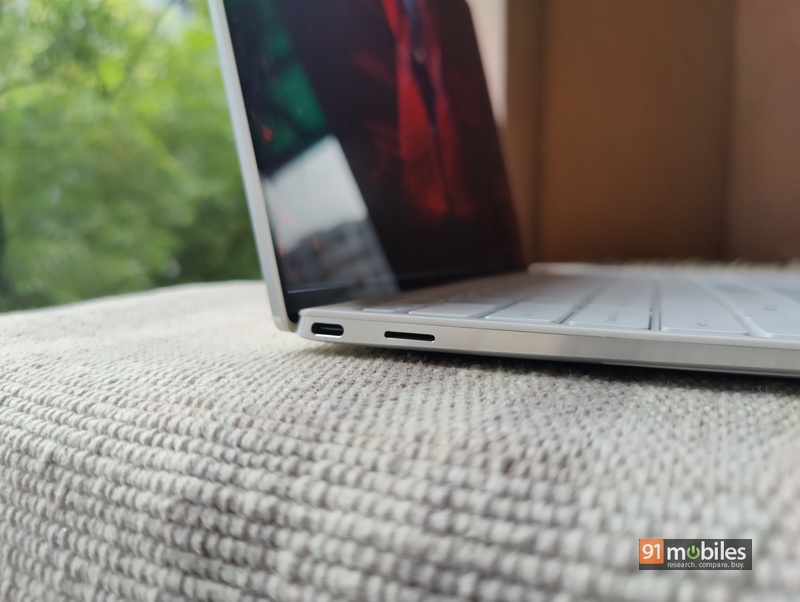 The display is one of the key aspects driving up the XPS 13’s price. You get a 4K UHD OLED panel similar to the one seen on Dell’s gaming sub-brand Alienware M15 R3 last year. The 13.4-inch screen on the XPS 13 sports a 16:10 aspect ratio rather than the traditional 16:9 present on many laptops. The bezels around the panel are razor-thin and incredibly Dell has managed to fit a 720p webcam along with an IR face scanner at the top. In its entirety, the OLED’s sharp blacks and vivid colours make for an exceptional viewing experience. Throw 4K into the mix and this is a machine your eyes will find hard to leave. Dell claims a 100 percent sRGB and 90 percent DCI-P3 gamut support which gives creative users a wide room for photo editing and colour correction work. The display’s touch screen further enhances this ability, though Dell does not provide a stylus or a pen inside the box. Astoundingly, the XPS 13 display has 500nits of peak brightness allowing easy viewing in outdoor conditions. Does the Dell XPS 13 have one of the best displays in the business? All I can say it would be hard to find better. That being said, a 4K OLED panel is not really a necessity for everyone. One can be satisfied by an FHD panel on the lower-end XPS 13 model which is a lot more affordable than the one I’m reviewing. 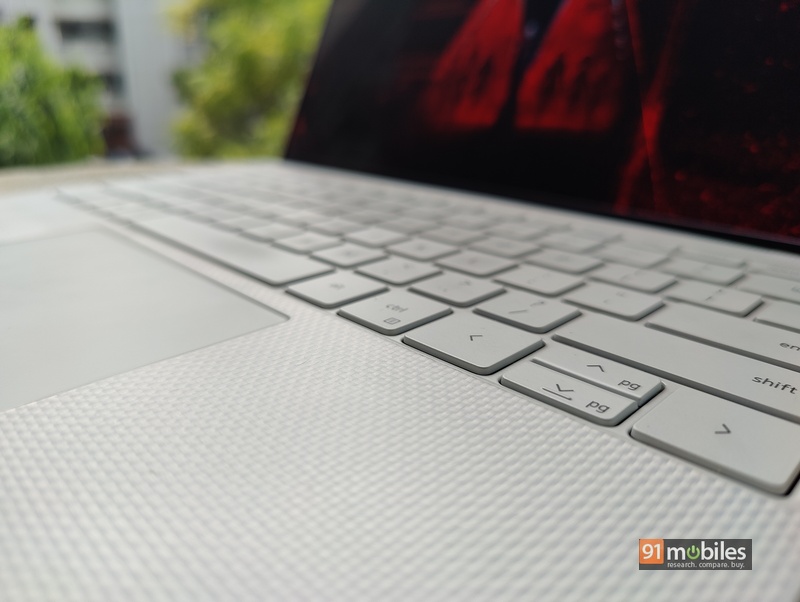 A wonderful typing experience does make working on a laptop that much more enjoyable, not to mention more productive. The Dell XPS 13 has you covered with its traditional six-row chiclet-style keyboard. The keys are slightly cramped but the travel and a satisfying click make it worthy. My only complaint is the white colour scheme of the laptop and the backlighting are quite similar, making it difficult to decipher the keys during the daytime. This is a problem I had faced with the ROG Zephyrus G14 (review) as well. The trackpad works well though, and also offers a sizeable area. With Windows Precision drivers doing their part, the touch response on the trackpad is quite good as are the multi-finger gestures. I would, as always, recommend you to use an external mouse for doing any kind of professional work. 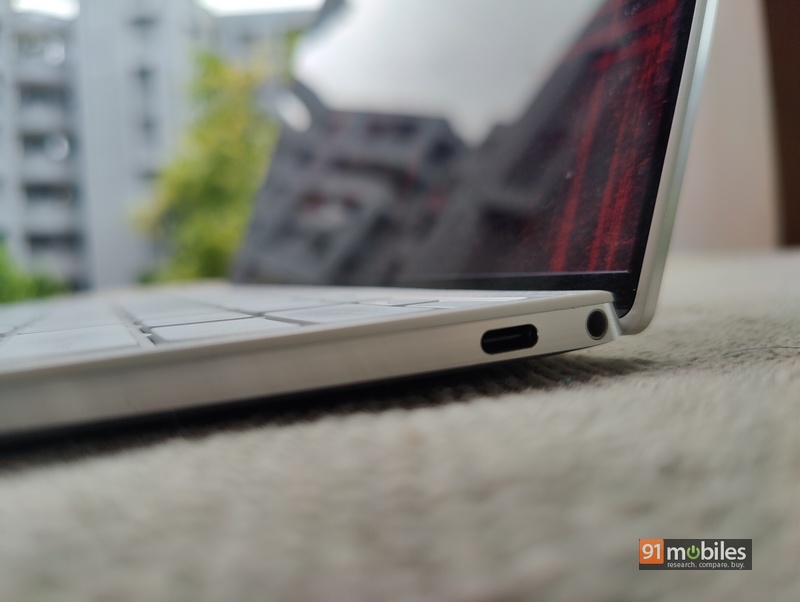 The 11th Generation Intel Core i7-1185G7 processor handles the number crunching, although as I had mentioned before, there is an i5 version as well. Such a thin chassis might not bode too well for performance-oriented operations but for the most part, the Dell XPS 13 delivers. I probably won’t call myself a power user but my work does involve running a number of Chrome tabs and switching between several Microsoft Office suite applications. The XPS 13 faced no problems at all with this, though I did notice a slight lag after prolonged usage. Benchmark numbers painted a picture of resilience with Geekbench 5 single-core and multi-core scores of 1,493 and 5,158. On Cinebench R23, the device outputted 3,999 and 1,375 both of which are standard for 11th-gen i7 chips. PCMark 10 gives you an idea about how well the device performs usual day-to-day tasks. The XPS 13 got a score of 4,967 which is again quite decent. The main issue with the device arises when it is asked to run graphics-heavy tasks especially with the full 4K resolution turned on. There is a fair bit of heating at the bottom, making it difficult for me to keep the laptop on my lap. I ran a couple of low-intensity games like Valorant and CS: GO, both of which ran at medium settings, giving somewhere in the range of 55-60fps. The integrated Iris Xe graphics are not meant for handling heavy graphical loads and this should be kept in mind when purchasing the device. There is 1TB of M.2 PCIe NVMe SSD along with 16GB of LPDDR4x RAM on board. Apart from that, the speakers at the bottom are nothing to marvel at, as their sound gets muffled quite easily on a cushioned surface. The volume crackles rather badly when set at high while the sound lacks proper depth, although it is hard to expect quality sound from such a compact package. The fingerprint sensor, however, works quite well and Windows Hello allows for snappy face authentication using the IR blaster besides the webcam. 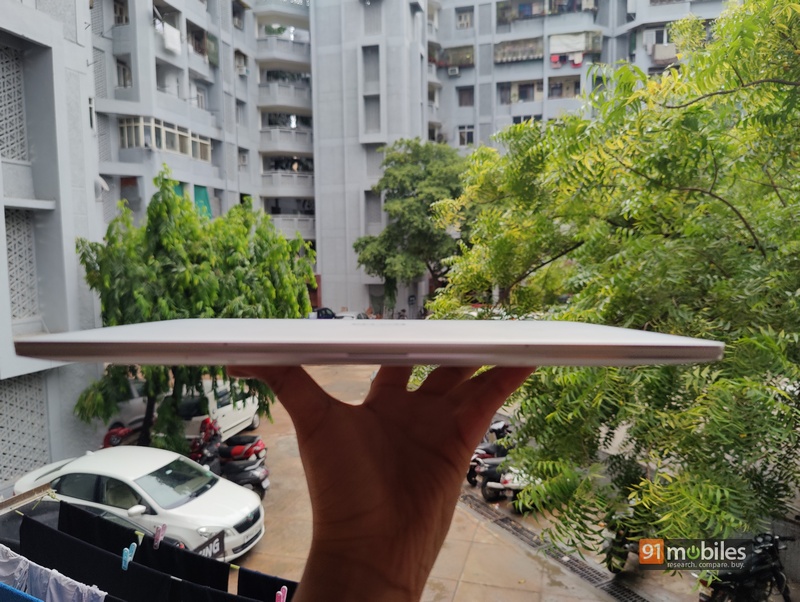 On the battery side of things, the Dell XPS 13 has a 52Whr pack that can be charged via the USB C port. That is helpful since the device has charging ports on either side. In terms of actual usage, the XPS 13 gave me about 7 hours of usage including a lot of video streaming and incessant usage of Google Chrome. It is not the best battery life, but it will get the day’s work done on a single charge provided the usage is not GPU-intensive in nature. 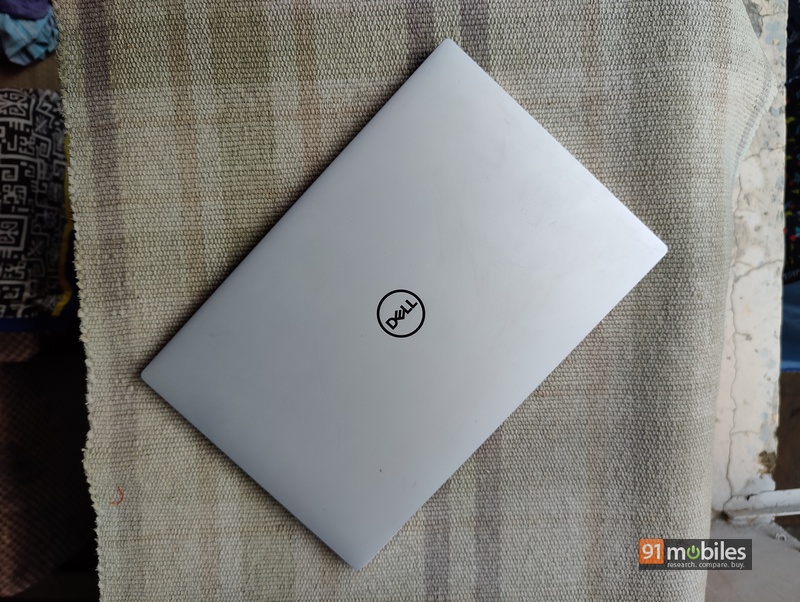 The Dell XPS 13 is a pristine device with the kind of elegance that demands a heavy price tag. There’s a lot to like about the laptop, especially its portability and lightness along with the thin chassis that allows it to slide easily inside a backpack. However, the lack of ports and overall average thermal management doesn’t allow for a lot of intensive work. The display is one of the finest in the segment, but one still wonders if the asking price is worth it. Buy the Dell XPS 13 if you covet a super sleek design, and are allured by its gorgeous 4K OLED panel.