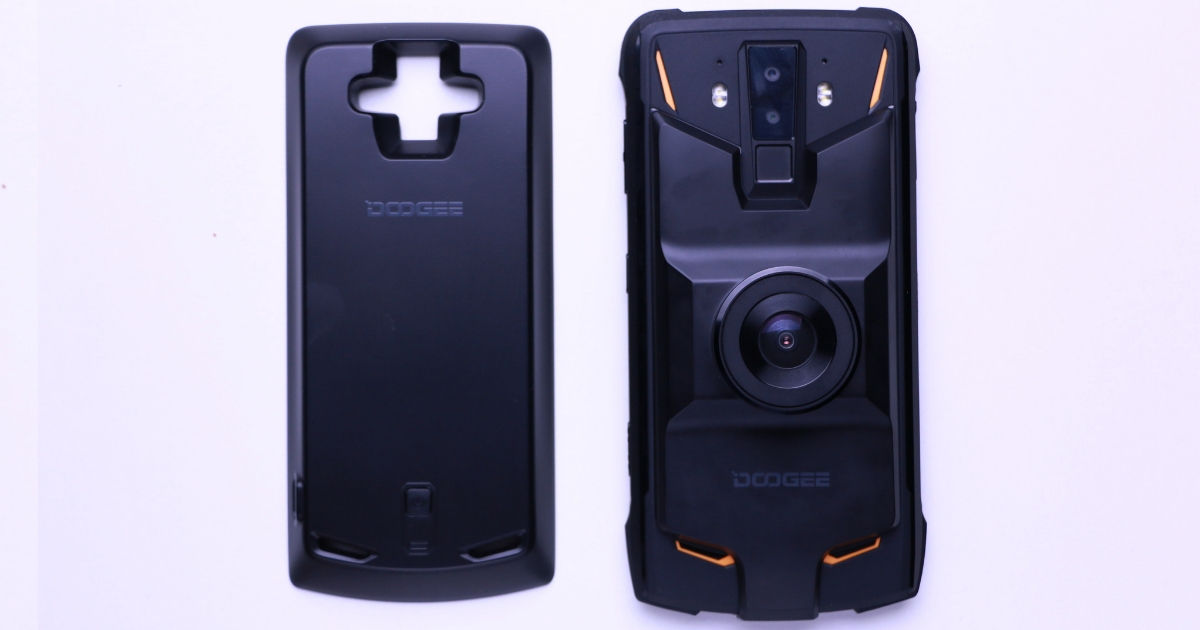 “I’ll be back“, “I’ll have one vodka martini, shaken not stirred” and more such badass dialogues from rugged characters rushed through my mind when I first laid my eyes on the Doogee S90. The smartphone could easily be the choice of device for the John McClain from Die Hard, the Terminator, or even James Bond. The handset which Doogee is calling Super Flagship Modular Rugged Phone was actually conceptualised through a Kickstarter campaign. And it does deserve your attention. The S90 is a modular phone that supports a plethora of accessories, has IP68, IP69K and MIL STD-810G rating for durability, making it a dream device for those who are always out and about. While the smartphone is not available in India, we managed to get our hands on an imported Doogee S90 from China and here are our two cents. 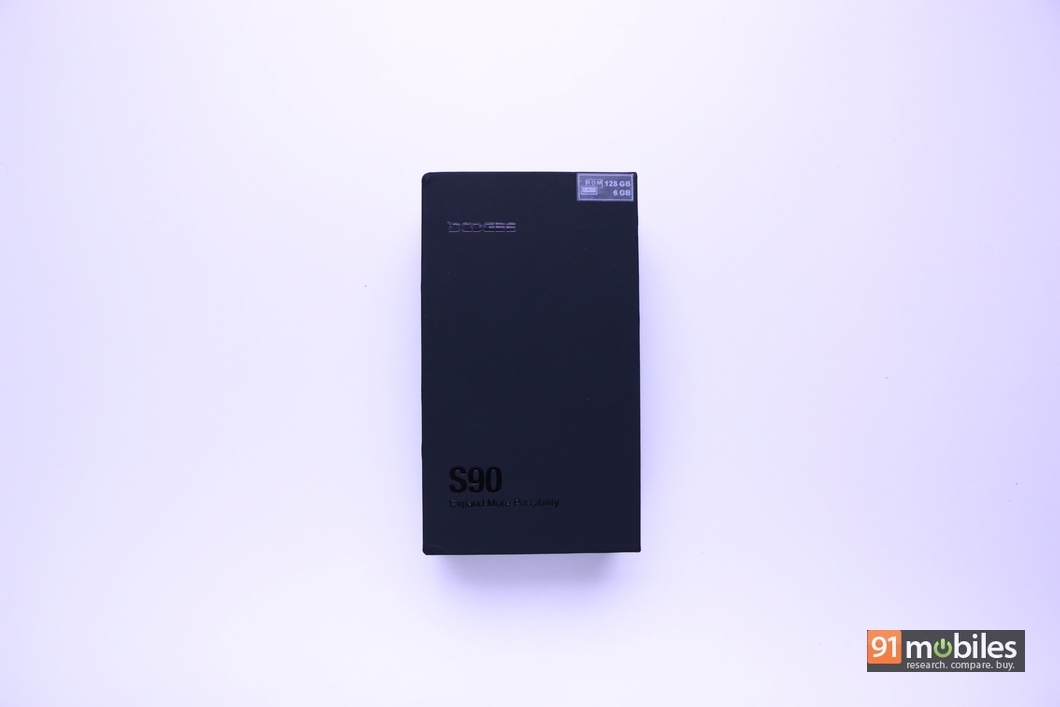 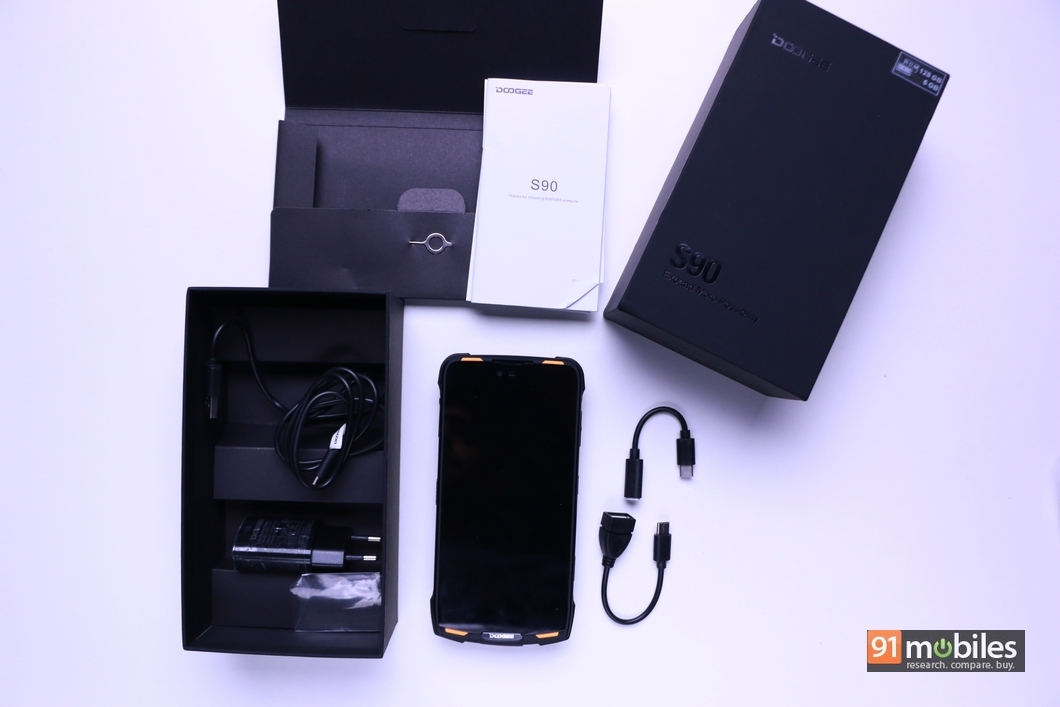 Before I get into describing the design and construction of the Doogee S90, let me put this out there. I am someone who uses heavy-duty rugged cases from makers like Otterbox, Supcase and others on my personal OnePlus 6 (review), which means I’m not usually intimidated by bulky cases and build. However, out of the box, the Doogee S90 was nothing short of formidable with the 5,000mAh battery mod attached to it. Remove the battery mod, and the phone is still as bulky as my OnePlus 6 with Supcase Unicorn Beetle Pro case on. This is a good thing for those looking for a nearly indestructible smartphone but not so, for those who prefer a sleeker device. 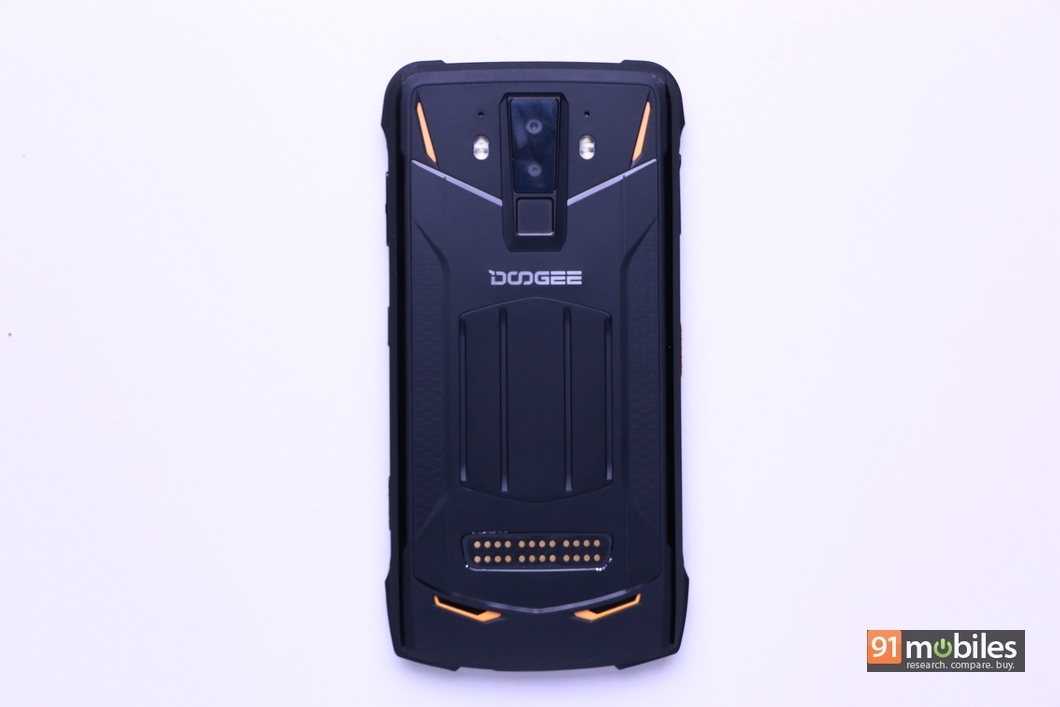 Crafted out of a Titanium alloy, the Doogee S90 has soft compound rubber corners, anti-skid crocodile pattern on rear panel and waterproofing on the 16-pin connector. The chassis in its entirety is being held together by 12 visible Philiphead screws, which further gives strength to the whole structure. This was evident when the Doogee S90 didn’t flex even a bit when a colleague decided to go JerryRigEverything on it and tried bending the S90 like his life depended on it. Doogee claims that the smartphone comes with a plethora of rating and certifications including the IP68 for water- and dust resistance, US military standard MIL-STD-810G rating for durability and IP69K rating, which means it can survive an onslaught from a high-pressure water jet as well. Needless to say, the smartphone is designed to survive all sort of abuse and several waist-high drops as well, which I subjected it to. 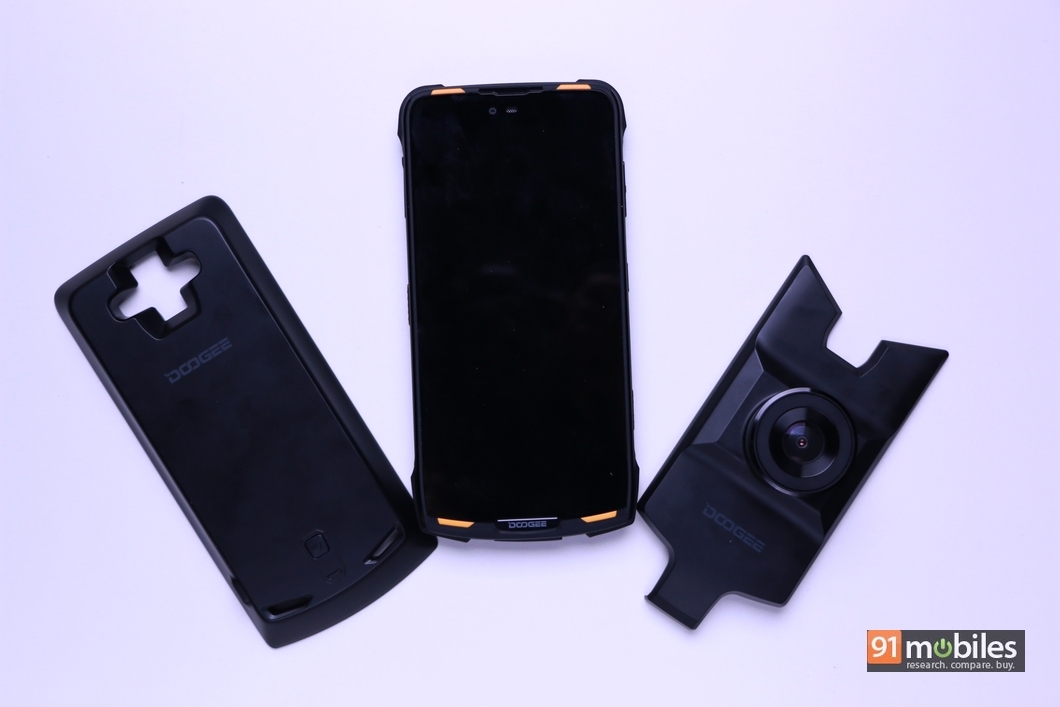 As for the components, the rear panel is home to the dual-camera module with two separate dual-LED flash plus the Doogee logo towards the centre and a 16-pin magnetic connector along with loudspeaker at the bottom. The positioning of the loudspeaker is questionable as it’s very easy to cover the speaker with your hand and while using mods, they get buried deeper. On the right spine, there are volume buttons, power key and a dedicated camera shutter button (why don’t more brands offer this?). On the other side, you will find a plastic flap covering the hybrid SIM slot and a dedicated button, which lets users assign a task each to single click, double click and long-press (once again, why don’t more brands do this?). The top of the smartphone is laid bare, whereas the bottom is home to the USB Type-C Port, which is protected by another plastic flap. And lest I forget, the yellow highlights on the black smartphone with crocodile pattern looks straight-up mean, and I say that in a good way.

Take a dekko at the gallery below to see how mighty the Doogee S90 is, although I am afraid that pictures don’t do justice to the handset.

Let’s move on to the performance aspect of the handset, which I personally felt was slightly underpowered on paper compared to how beastly the handset looks from the outside. Having said that, the 12nm MediaTek Helio P60 ticking at the core with 6GB RAM and 128GB storage performs well without breaking a sweat. During my short stint with the phone, I was surprised at how well the device transitioned between various apps while multitasking and gaming. However, the only grouch I had was with the animations being used by custom interface running atop the Android 8.1 Oreo. The animations are quite slow, which made the device look sluggish especially while waking up after recognising the fingerprint. Speaking of the fingerprint reader, the module is accurate except for a few times when it failed to recognise my digits. There’s a face unlock feature as well, which works as advertised. 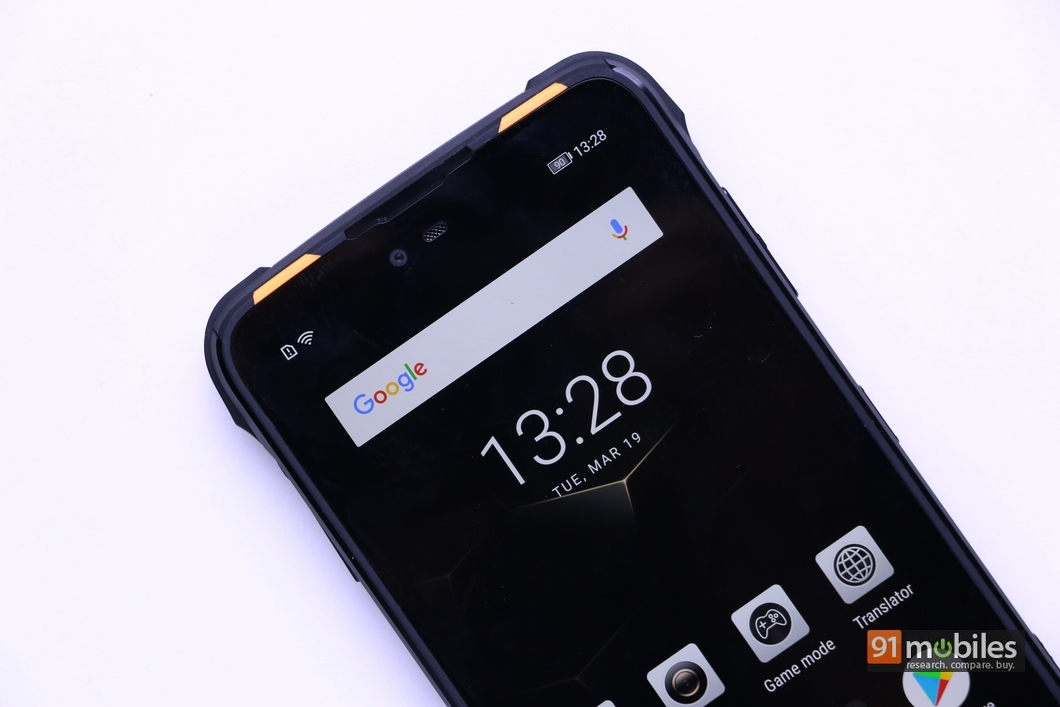 Speaking of the software, the Doogee S90 has a set of survival apps like compass, sound meter, barometer, pedometer and more, which should come handy when you are out and about trying to find your way through a trek. Additionally, the Doogee S90 flaunts Full Netcom support, which means it is connected no matter where you go, except for non-network areas. As for the display, the smartphone features 6.18-inch full HD+ panel with a layer of Corning’s Gorilla Glass 4 protecting it. The viewing angles, brightness and colours are top notch on the screen, however the screen gets very reflective in direct sunlight making it difficult to read. The second grouse I had with the display is despite offering 19:9 aspect ratio, it has sizeable bezels all around and the corners are rounded more than they should be and thus eating into the screen real estate.

The Doogee S90 is powered by a hefty 5,050 mAh cell and with the battery mod attached, the capacity goes up to 10,000mAh. I used the handset without the battery mod and during my short stint of a couple of days, the battery went only halfway down to 50 percent. This is after hours of playing Soccer Hero, streaming YouTube and taking 100 of shots with Night Vision Camera Mod, which is pretty impressive. 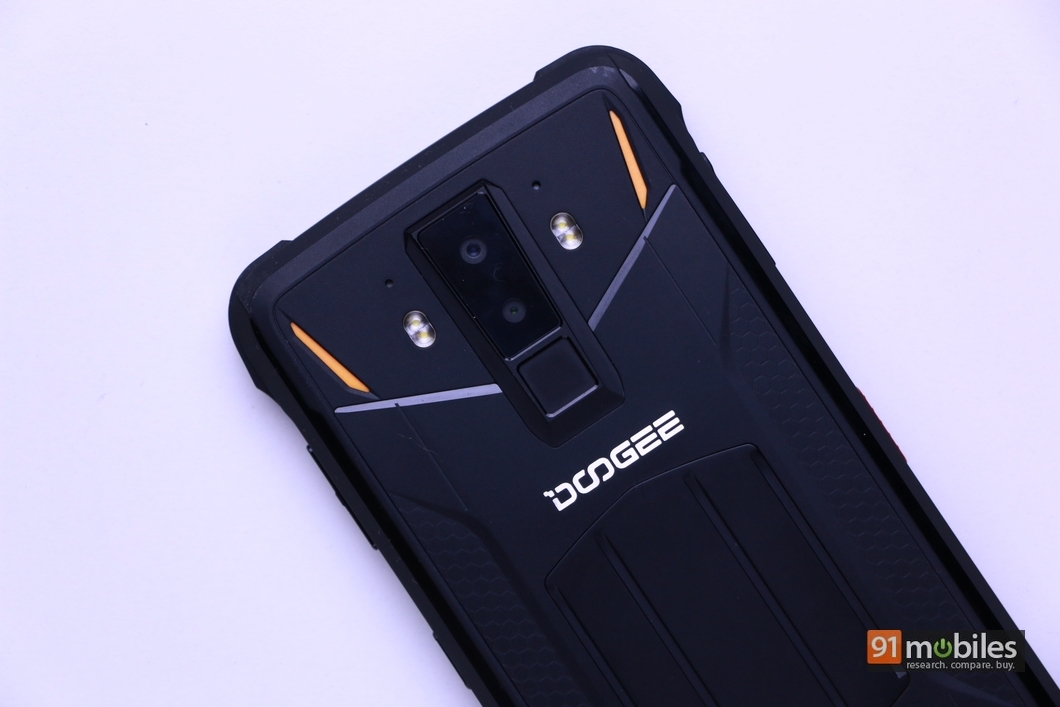 Coming to the imaging department, the Doogee S90 has been equipped with 16-megapixel primary shooter on the back accompanied by an 8-megapixel depth-sensing lens. The brand claims that smartphone is capable of AI Deep Learning, which facilitates user behavior learning, facial recognition, and scene identification. However, while the initial shots I took were decent including the daylight shots, tragedy presented itself when I shot indoors. The camera is incapable of handling the glare and the same is all over the place, rendering the pictures useless. The selfies from 8-megapixel front snapper are also good but have the same issue of light glare spreading abnormally.

I also tried the night-vision mod on the Doogee S90 and while the camera mod can click a clear picture in a pitch black condition, the images are far from useable due to the amount of noise and the fish-eye distortion. This leads me to believe that like every other mod of Doogee S90 (Walkie Talkie, 5,000mAh battery mod, and Game mod), the Night Vision camera is more utilitarian in nature. Check out the camera samples below from the Night Vision Mod.

There’s a reason why rugged smartphone maker like CAT stayed away from Indian market and brands like Samsung never launched their ‘Active‘ range of flagships here. A large percentage of Indian smartphone user base prefer sleek and attractive looking smartphone, which Doogee S90 is definitely not. And unfortunately, Doogee also has not intention of bringing the S90 to Indian shores. Therefore, if you are anything like me who adore such might beast of smartphones and want to get your hands on Doogee S90, you will have to either get one from China or order from a website that ships from there.