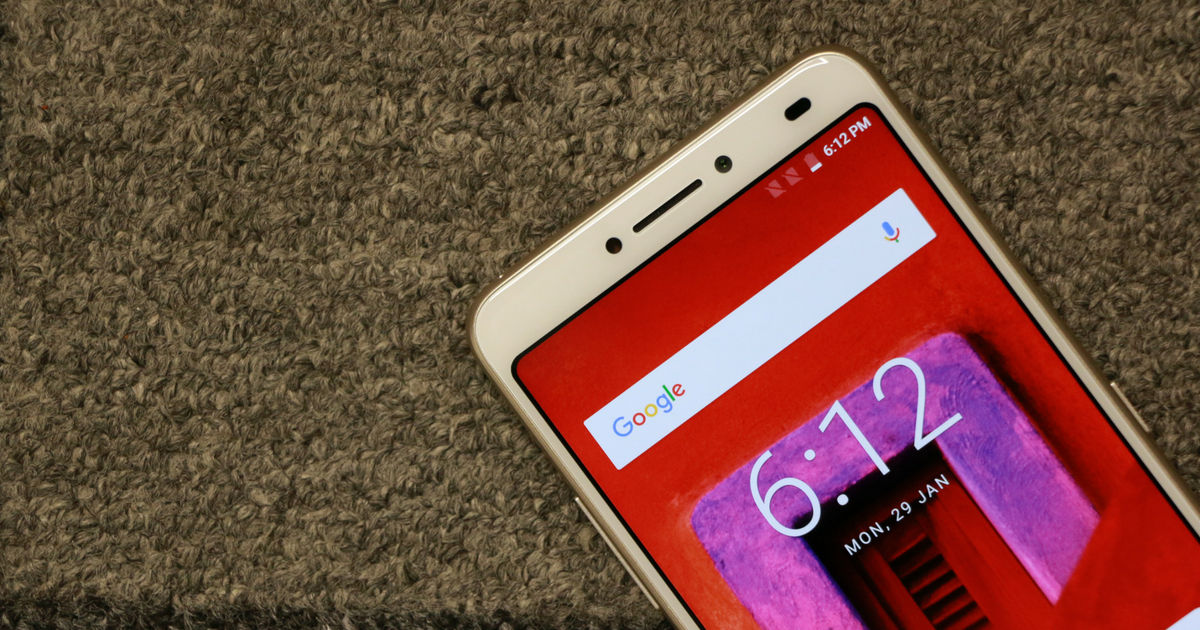 Smartphone makers have been in a race to bring the best spec sheets to the budget segment for a long time now. But now it seems that phonemakers have finally turned their attention towards making their affordable offerings more aesthetically appealing. From the Honor 9 Lite (review) to the latest Moto G6 (review), we have seen some premium looking smartphones that do not burn a hole in your pocket. Now, just as the saying goes, ‘When in Rome, do as the Romans do,’ Comio has joined the fashion brigade of smartphones with its latest launch, the Comio X1 Note. Is the newest phone from the Chinese handset maker just dressed for the occasion or does it rise to it as well? We intend to find out in our first impressions of the newest premium looking budget smartphone. 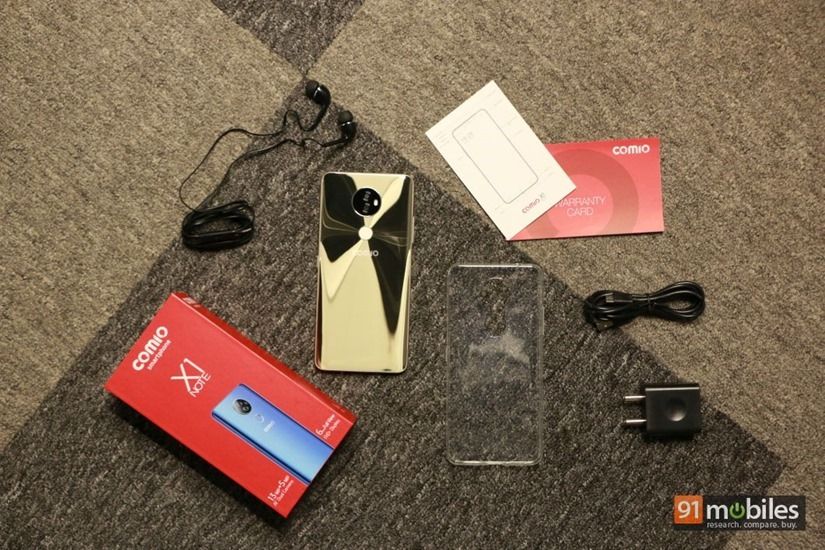 Let us take a peek into the packaging first. The Comio X1 Note comes in a bright red box with branding all around and core specs listed at the bottom. As you open the box, you will find the X1 Note lying atop a tray that also doubles up as a sheath containing the documentation and the clear TPU protective case. Upon lifting the tray, you will find the micro-USB cable, power adaptor and thankfully, a pair of in-ear headphones. This is all that is there to the packaging of the Comio X1 Note. 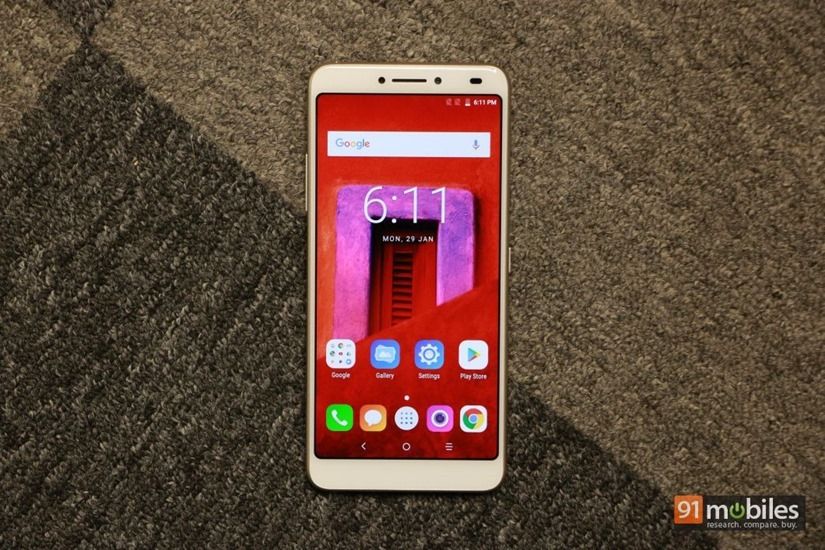 Moving on to the X1 Note, the smartphone looks similar to Xiaomi’s Redmi Note 5 Pro and Redmi Note 5 from the front, as it comes with the same design lines, bezels and 18:9 display. Flip the handset over, and you are bound to mistake the X1 Note for the Moto G6 if not for the Comio branding and matte fingerprint scanner. The newest smartphone comes with the same circular camera module as the Moto device but with a subtle difference. The camera sensors on the Comio X1 Note are stacked vertically with the single LED flash on the right. The phone also comes with a glossy acrylic glass panel on the rear, which looks good but is a smudge magnet.

Apart from this, the brand has placed the SIM slot (dual SIM + dedicated microSD slot) and the power button on the right edge, whereas the volume buttons are on the left. There is a 3.5mm audio jack on the top and the bottom is home to a loudspeaker grille along with a micro-USB port.

The 6-inch 2.5D curved glass display on the front comes with the tall 18:9 aspect ratio and a resolution of 2,160 x 1,080 pixels. We had no qualms in the display department as the colours are quite punchy and outdoors visibility is not compromised. The brand has also integrated MiraVision for the display, which further enhances the viewing experience by enhancing the picture quality in real time. Coming to the performance, the Comio X1 Note is powered by a 1.45GHz quad-core MediaTek MT8735 SoC paired with 3GB RAM and 32GB of native storage. Users have around 24GB of storage at their disposal. In our brief stint with the handset, we didn’t come across any deal-breaking stutters or lags. The smartphone jumps between multiple apps and performs routine tasks with ease.

On the software front, the handset boots Android 8.0 Oreo with features like Smart Manager, App Cloner, and gestures support baked into the software. For security, the X1 Note offers a fingerprint scanner as well as face unlock, which are both pretty responsive and accurate. The smartphone is powered by a 2,900mAh battery. 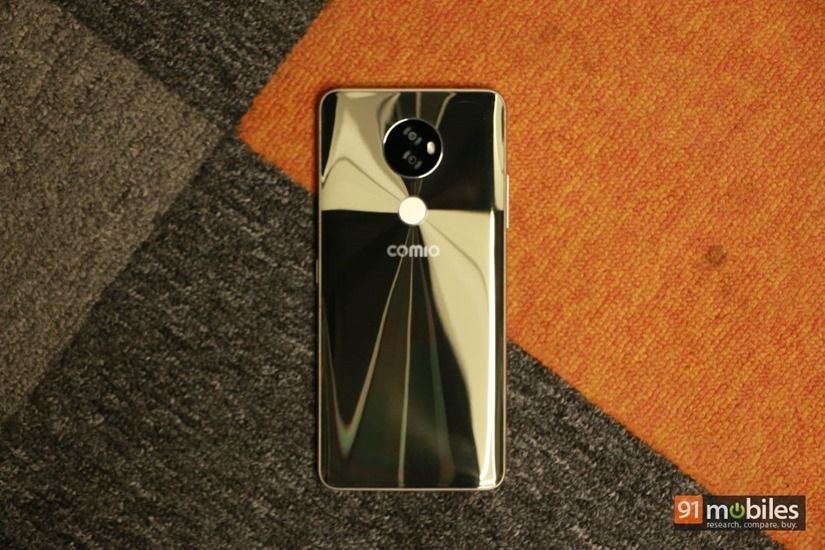 Coming to the imaging, the X1 Note comes with a 13MP primary camera with f/2.2 aperture backed by a 5MP secondary camera with a f/2.4 aperture on the rear panel. Comio has integrated various modes like panorama, portrait, time-lapse, and light trace. Another mode worth a mention here is the social mode, which offers instant sharing of pictures on various social media platforms. As is usual with budget dual camera smartphones, the rear camera produced decent pictures in good light but didn’t impress in low light situations. The portrait images also failed to impress as they had visible soft edges. For selfies, the Comio X1 Note offers an 8MP shooter with dedicated LED flash. The selfies captured with the front cameras were decent, to say the least, but the LED flash is definitely a bonus.

To conclude, the Comio X1 Note is definitely a good budget smartphone with good looks and the price tag working in its favour. The handset will set you back by Rs 9,999 and can be picked up from offline stores, which is another plus in its favour. However, when pitted against the likes of the Xiaomi Redmi Note 5 (review), Realme 1 (review) and the Moto G6, the newest launch faces a tough battle. What do you think of the new launch? Let us know in the comment box below.