91mobiles.com
Home Feature Everything you need to know about AMD Radeon™ RX GPUs for laptops 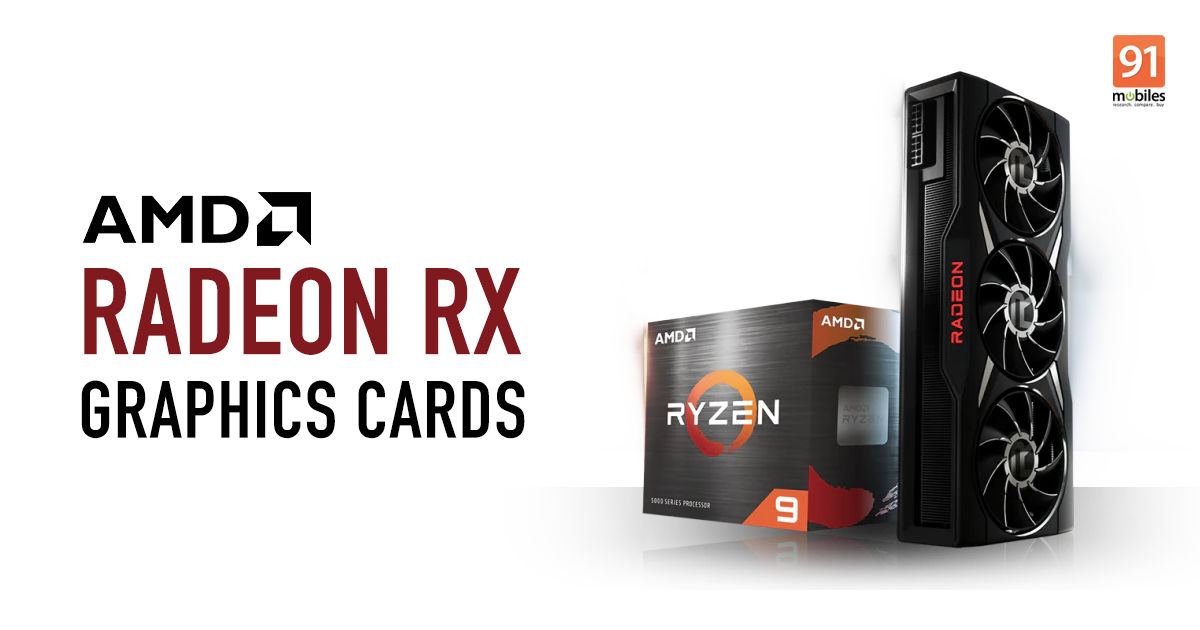 Back in 2020, AMD first unveiled its RDNA 2 microarchitecture, which brought a massive increase in clock speed and instructions-per-clock, apart from, of course, hardware-accelerated ray tracing. It was no surprise then to see custom configurations of this microarchitecture in high-end consoles like the PlayStation 5 and the Xbox Series X. But AMD had its own GPU lineup to unveil as well. When the AMD Radeon™RX 6000 Series GPUs arrived onto the scene, they blew the competition out of the water.

Along with them arrived their mobile cousins meant for use in laptops, allowing on-the-go gamers to experience everything from ultra-high framerates to ray tracing. Led by the AMD Radeon™RX 6850M XT, these graphics cards are allowing laptop manufacturers to provide state-of-the-art hardware with their machines, without compromising on space and size. With the highly advanced tech that has gone into these GPUs, these have completely revamped the gaming laptop space. Let’s take the look at what makes them cutting-edge.

If there’s one thing that gamers are always demanding, it’s that sweet combination of crisp resolution and high framerates. FidelityFX™ Super Resolution is a technology created to aid this conquest. Without toying much with the resolution of your games, it boosts your framerates using cutting-edge upscaling technologies. Get ready to play the most demanding of games in all their glory thanks to this technology that’s accessible via the AMD Radeon™RX 6000 Series mobile GPUs.

More than 110 games support this feature and the list just continues to grow, from expansive open-world titles like Far Cry 6 to the most demanding of shooters like Call of Duty: Vanguard. Plus, version 2.0 of this technology has also been launched for developers to harness. It ships with a next-level temporal upscaling technology and is designed to deliver similar or better than native image quality, apart from boosting framerates. It has already been adopted by several high-end games, including the likes of Sony’s God of War and Bethesda’s Deathloop.

Leading the pack of smart technologies onboard the AMD Radeon™RX 6000 Series mobile GPUs is AMD Smart Shift Max. The purpose of this Smart Shift concept is to increase CPU and GPU performance by varying the power requirement of each depending on demand. For instance, if a game needs more GPU resources than CPU resources, this technology will be able to divert more power away from the CPU to improve GPU performance. AMD Smart Shift Max is an updated version of this excellent feature and can lead to a 2x uplift in gaming performance on average across select games.

Working in tandem with AMD’s very own CPUs, the company’s Radeon™RX 6000 Series mobile GPUs can deliver a whopping 2x increase in battery life on your laptops. This is all thanks to the AMD Smart Shift Eco technology, which takes advantage of integrated graphics rather than the GPU when enabled. Laptops bearing the combination of the AMD Radeon™RX 6850M XT GPU and the AMD Ryzen™ 6900H Series CPU manage to offer improved battery life in comparison to other gaming laptops. When the Smart Shift Eco mode is enabled, the laptop will seamlessly shift from the discrete Radeon™graphics to the Ryzen™ integrated graphics for improving battery life.

The AMD Smart Access Graphics Technology helps increase performance by smoothly switching the hardware that controls the graphics. Essentially, it enables the AMD Radeon™RX Series GPU to gain direct access to the display instead of transferring information via the AMD Ryzen™ APU. On average, this can lead to a 15 percent increase in gaming performance in select games. This kind of control shows the sort of power AMD’s Radeon™mobile GPUs can offer in order to ensure an uninterrupted gaming experience for laptop gamers.

Another high-end technology designed to harness more performance is AMD Smart Access Memory. It allows the CPU unbridled access to GPU memory. Traditionally, Windows-based PC systems tend to only enable CPUs access to a fraction of the graphics memory (VRAM) at a given time. This prevents the hardware to take full advantage of the available resources. The Smart Access Memory technology allows AMD’s Ryzen™ CPUs to harness the full potential of the GDDR6 graphics memory onboard AMD Radeon™GPUs. This is achieved with the expansion of the data channel by utilizing the bandwidth of PCIe 4.0 standard.

This is a feature that’s rendered by all AMD GPUs and it’s been designed to deliver a clean, modern, and easy-to-use interface for when you need to quickly access stuff like game stats, captured media, performance reports, and driver updates. This hub of sorts can simply be accessed by pressing the ALT+R hotkey when you’re playing any game. AMD Software: Adrenalin Edition also lets you add all your games to it so you can easily access them anytime you want. Tuning of both the performance and the graphical capabilities can be done here as well. It’s a one-stop shop for gamers to make the most of their AMD-powered PCs.

Game streaming is of utmost importance to some gamers and for them, the AMD Noise Suppression technology on the company’s Radeon GPUs will come in incredibly handy. It’s primarily aimed at enhancing your voice and it does that mainly by reducing background noise. This is done with the help of a real-time, deep learning algorithm that works for both your input and output devices across AMD-powered systems. The kind of enhanced quality and improved concentration that AMD Noise Suppression enables makes it an irresistible offering.

AMD Advantage branding is one of the clearest indicators yet to show that a laptop is capable of delivering on multiple fronts. AMD Ryzen™ CPUs and AMD Radeon™GPUs combine to take your laptop’s performance to the next level. Moreover, AMD Advantage-branded laptops even come with superior displays to translate all that power into stunning visuals. All the technologies mentioned above lead to blazing fast gaming with high framerates and efficient battery consumption. For instance, thanks to the combination of the SmartShift and Smart Access Memory technologies, you can witness an up to 11 percent rise in performance in games like Borderlands 3 on AMD Advantage laptops.

The premium displays that go onto these machines are specially chosen to enable a high refresh rate and low-latency visuals. They are also bright enough to allow high contrast levels. Lastly, AMD Advantage gaming laptops deliver optimized thermals to stay cool and quiet no matter how long your sessions last. Moreover, these are designed to be lighter than other gaming laptops. Some examples of AMD Advantage laptops include the likes of the Alienware M17 R5, the ASUS ROG Zephyrus G14, the MSI Alpha 17, and the ASUS ROG Strix G15.

As you can see, some of the most successful gaming laptops in the market have been given the AMD Advantage treatment and this has all been made possible by the cutting-edge nature of the AMD Radeon™RX 6000 Series GPUs. Their superior performance has made it possible for hardcore gamers to game on the go. And there’s no doubt that these GPUs will continue to allow manufacturers to bring power-efficient, high-performance gaming to laptops.
ShareTweetShare

AMD gaming laptop buying guide: What you need to know